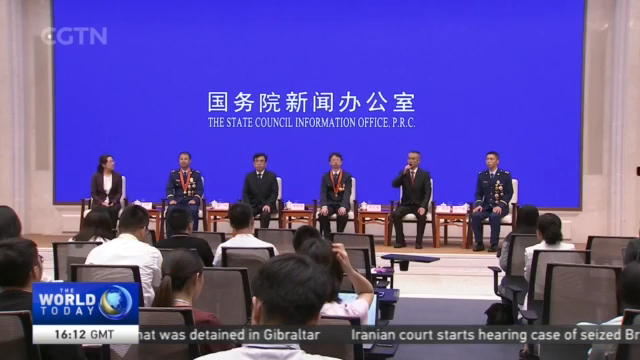 2019 has seen a wide range of devastating disasters across China. On Tuesday, the State Council Information Office invited many who devote their lives to protecting their country and fellow citizens to publicly share their personal stories. They offer a side of China's emergency management system that often goes unseen. CGTN's Mark Fontes has more.
Zhang Zaigui's contributions to society are worth their weight in gold. As a veteran in supervising coal mine safety, the senior engineer has sacrificed his personal health many times for his team and his native Shandong province. Since 2001, he has descended into over 3000 wells and saved the lives of more than 150 coal miners. His vision is blurred due to working countless overtime hours in the dark. But Zhang says it's all in a day's work.
ZHANG ZAIGUI OMBUDSMAN, SHANDONG COAL MINE SAFETY SUPERVISION BUREAU "The miners just want to be able to go home safely. Is that too much to ask? Therefore, every time I go down into a well, I eliminate the hidden dangers and protect the lives of my workers."
And Zhang isn't alone in routinely risking his life for the safety of others. Hou Zhengchao, a career firefighter, has participated in more than 140 forest firefighting and earthquake rescues. Even though his department has been covered by the Ministry of Emergency Management, he continues to devote himself to emergency rescue.
HOU ZHENGCHAO PLATOON LEADER, SICHUAN FOREST FIRE FIGHTING TROOP "More than 95% of forest fires are caused by humans. Our priority is to raise public awareness about forest fire protection, and make sure the concept of protecting forests is deeply rooted in peoples hearts."
And in China's capital city, Cai Rui's devotion to country and mankind are unmistakable. As the safety instructor at Tiananmen square and Beijing's Palace Museum, he has set up different contingency plans to ensure the absolute safety of both famous landmarks.
CAI RUI INSTRUCTOR, BEIJING FIRE CORPS "As the guardian of the Forbidden City, this is not only a responsibility that people have given me, but also a personal mission. We must guard the fire safety of the Forbidden City no matter what difficulties we face."
Of the millions in China who are vital members of its emergency management network, many remain unknown to the public.
Many hope their contributions and sacrifices will uphold the safety of the nation. Mark Fontes, CGTN, Beijing.
SITEMAP
EXPLORE MORE
DOWNLOAD OUR APP