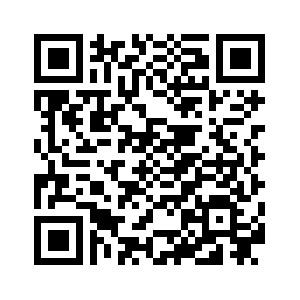 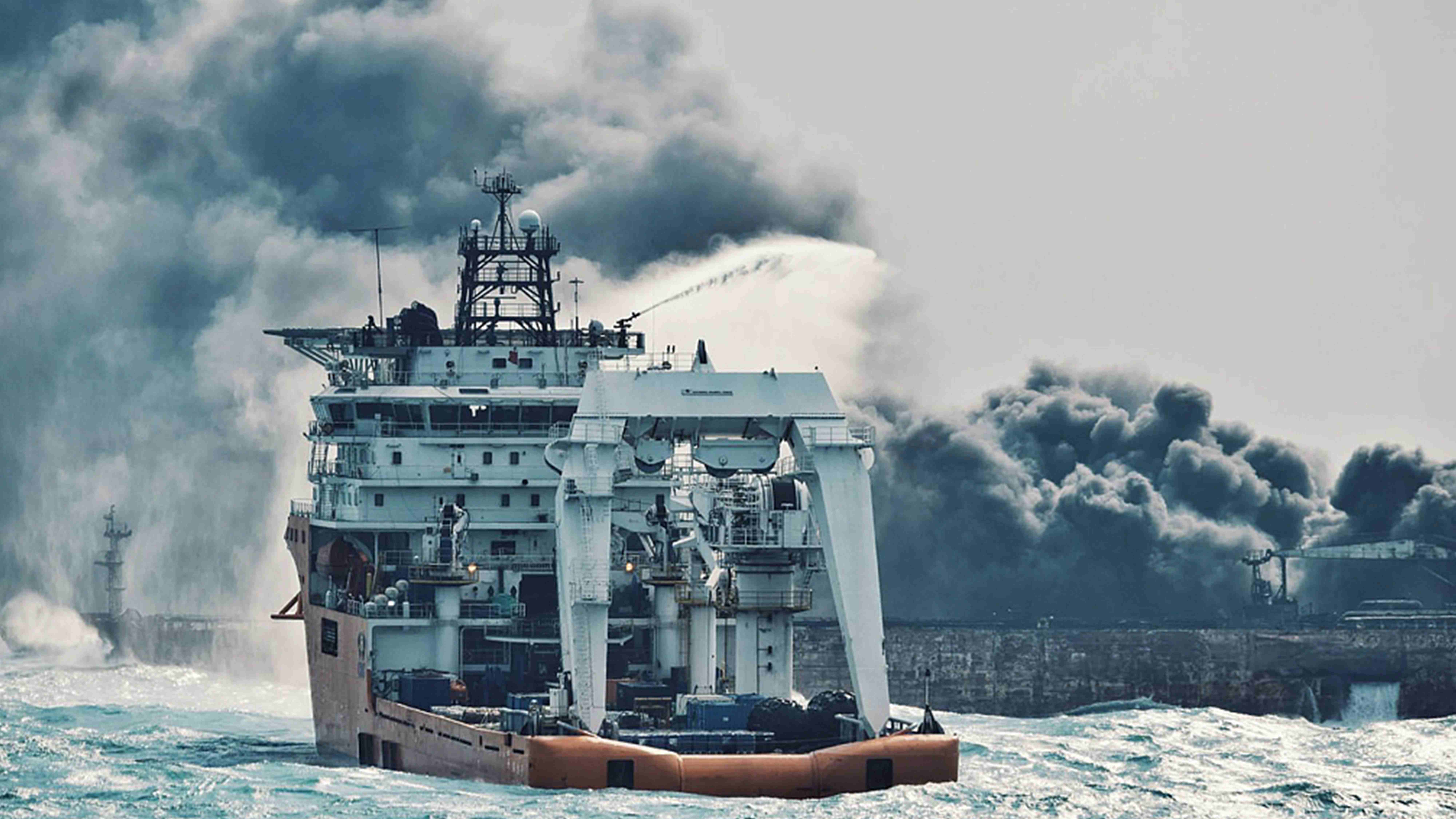 An oil tanker still burns one week after it collided with a Chinese vessel in the East China Sea.
Carrying 136,000 tons of light crude oil from Iran, Sanchi has been ablaze since it collided with the CF Crystal, a Hong Kong-registered bulk freighter, about 160 nautical miles east of the Yangtze River estuary in Shanghai on Jan. 6.
As of Saturday, three bodies out of the 32 missing crew members as well as the tanker's data recorder have been recovered from the ship. 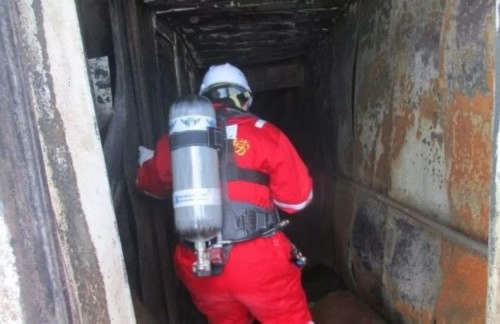 Rescuer onboard the sinking and burning oil tanker, Sanchi, in a rescue mission, January 13, 2018 /Photo released by Shanghai Salvage Bureau

Rescuer onboard the sinking and burning oil tanker, Sanchi, in a rescue mission, January 13, 2018 /Photo released by Shanghai Salvage Bureau

Of the crew, 30 were Iranians and two were Bangladeshis. One body was retrieved on Jan. 8, while two more bodies were found on Jan. 13 after a team of rescuers managed to board the ship on Saturday.
The ship’s Voyage Data Recorder (VDR), similar in function to the “black box” on an airplane, has also been retrieved and brought back for further analysis.
The temperature inside the ship’s living area was 89 degrees Celsius, hindering any further effort to break into it before the team had to retreat, according to the rescue report. 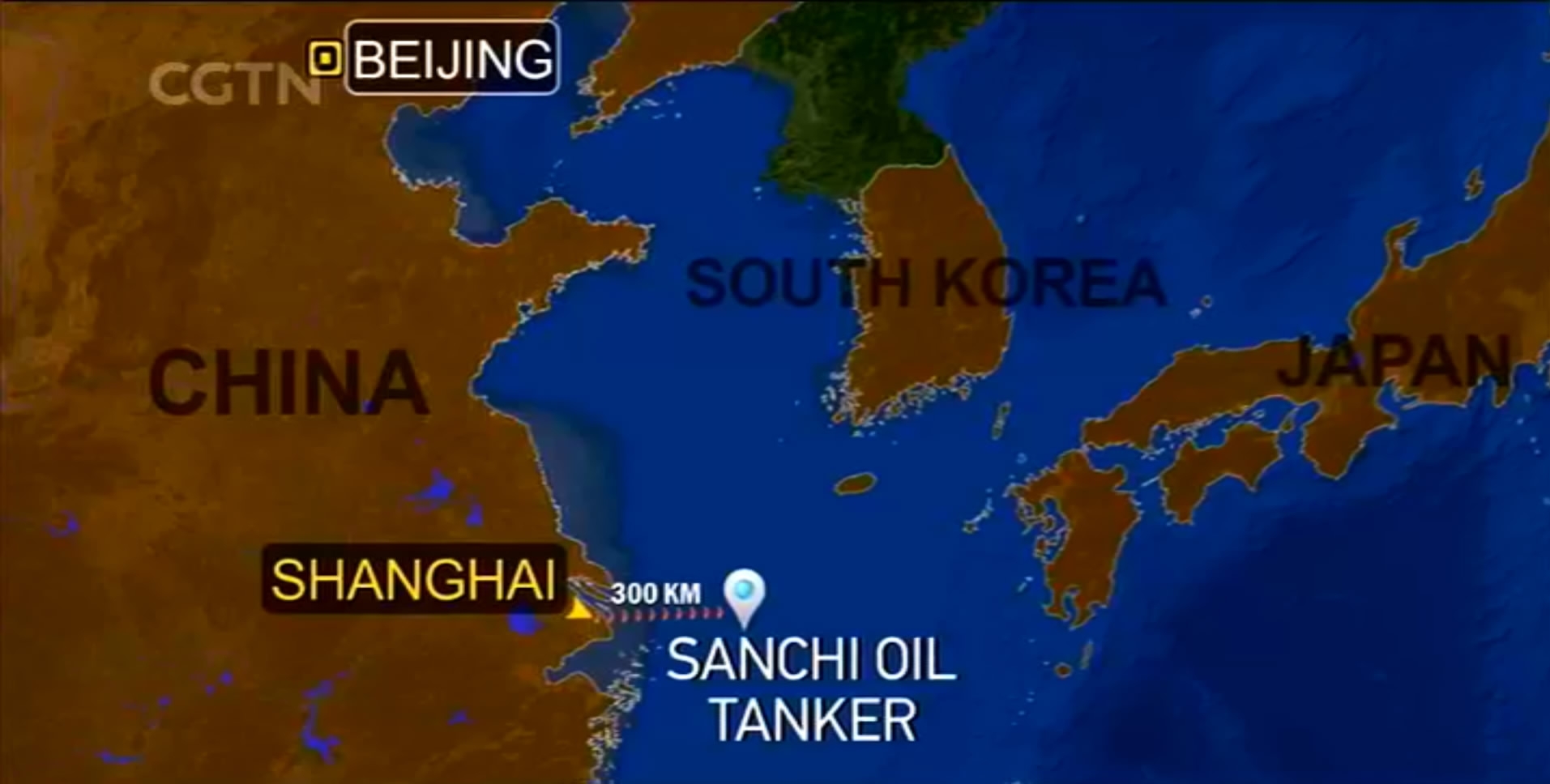 Speaking to CCTV, Zhang Yong, a senior engineer from China’s State Oceanic Administration (SOA), said that the leaked oil from the collision does not pose a huge environmental threat to the marine ecosystem for the time being, and that tests are still being conducted to determine the consequences of the incident. However, he added, the fire is damaging the atmosphere.
Why is the fire still burning?
The rescue mission faces two major challenges: external conditions, which are affected by the direction of wind and the waves, and a potential for explosion, CGTN's Wei Lynn Tan explained. 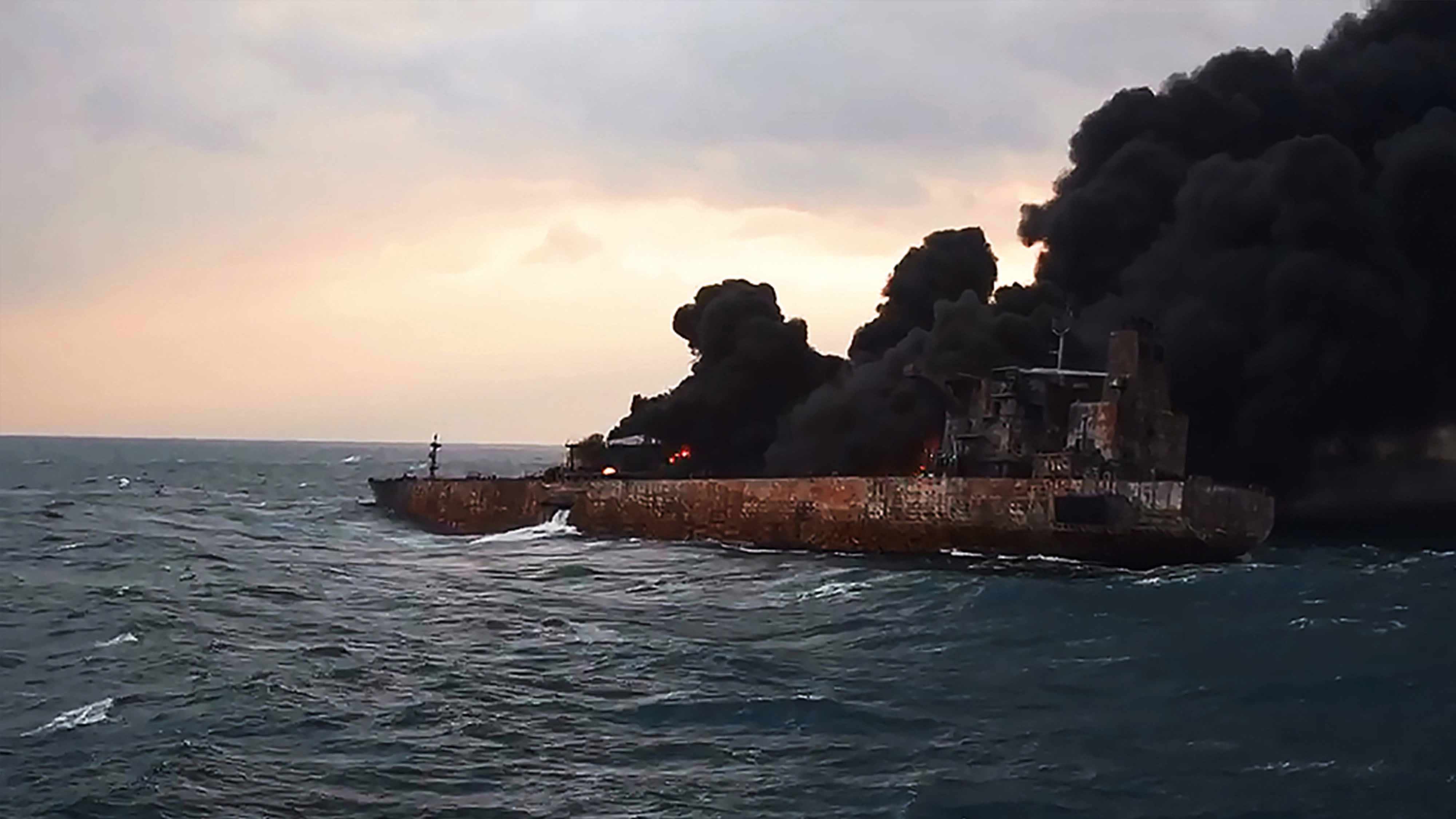 The weather conditions improved yesterday, allowing rescuers to approach to the burning tanker and retrieve the bodies of two more crew members as well as the VDR, or "black box," Tan said.
There is still half of over 100,000 tons of light crude oil left on the tanker and the ship may keep burning for another week, Tan said, citing a chemical expert. The fumes emitted by the burning oil are toxic, which increases the difficulties rescuers face.
The cause of the collision and the potential impact on the environment still need further assessment, Tan added.
Below is a brief review of the timeline of events.
Jan. 13: Two more bodies found, Sanchi remains on fire
Two more bodies of the crew members were found after four rescuers got on board the vessel on Saturday, according to Shanghai Maritime Search and Rescue Center. A total of three corpses have been discovered up to this point. 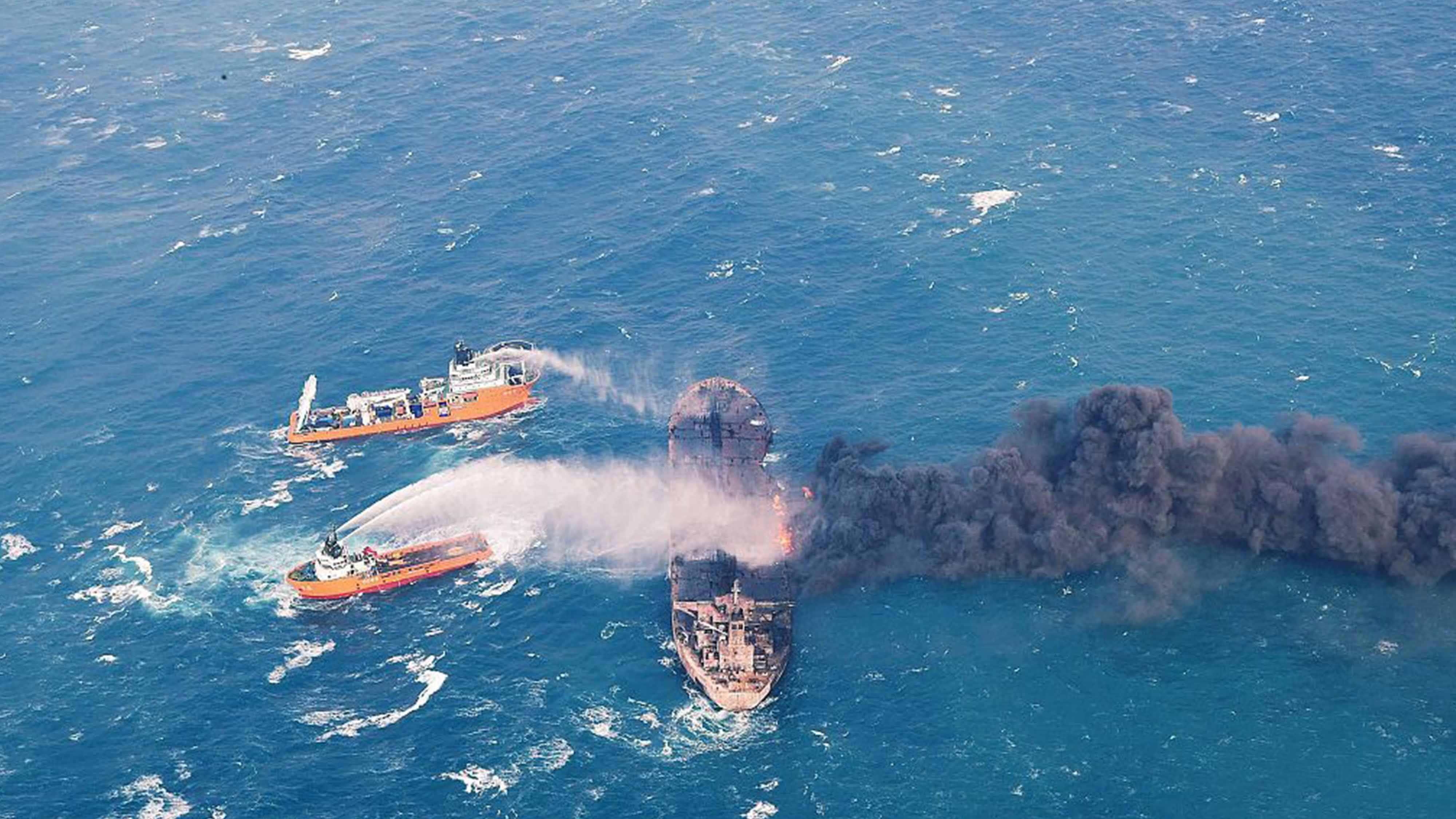 Jan. 12: Bad weather complicates the rescue
Shanghai Maritime Bureau said that there was still a large fire on Sanchi, and it was likely to explode and sink. Deputy Director of the bureau Xie Qunwei said Chinese rescuers braved grave danger in approaching the tanker, given the fact that the air from the burning is toxic and bad weather conditions have complicated the rescue.
Jan. 10: Blast happens
China's Ministry of Transport (MOT) said Wednesday that a blast happened after rescue crews were trying to put out the fire with foam. 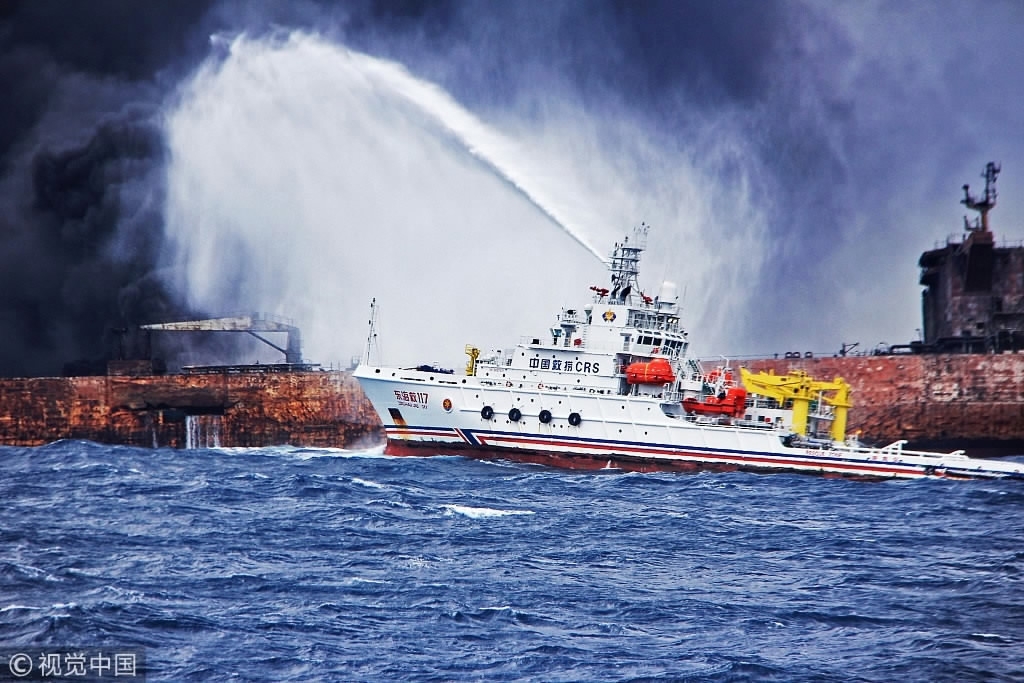 Jan. 9: No 'large-scale oil leak'
The Chinese government said late Tuesday it had not found a "large-scale" oil leak, and the condensate was burning off or evaporating so fast that it would leave little residue.
Jan. 8: First body found
The body of a Sanchi crew member was found Monday in the water near the tanker.
Jan. 7: Sanchi crew members missing
According to China's MOT's Sunday statement, Sanchi's 32 crew members, including 30 Iranians and two Bangladeshis, had gone missing. The bulk freighter CF Crystal's totaling 21 crew members, all Chinese nationals, had been rescued. The ministry also stated that Sanchi was still floating and burning, and the oil on board spilled into the sea, without specifying the area of contamination.
Jan. 6: The crash
The Sanchi was carrying 136,000 tons of oil (worth 60 million US dollars) from Iran to S. Korea when it ran into the CF Crystal, a Hong Kong-registered bulk freighter carrying grain from the US. The crash occurred about 160 nautical miles east of the Yangtze River estuary in Shanghai on Jan. 6.
Official comment 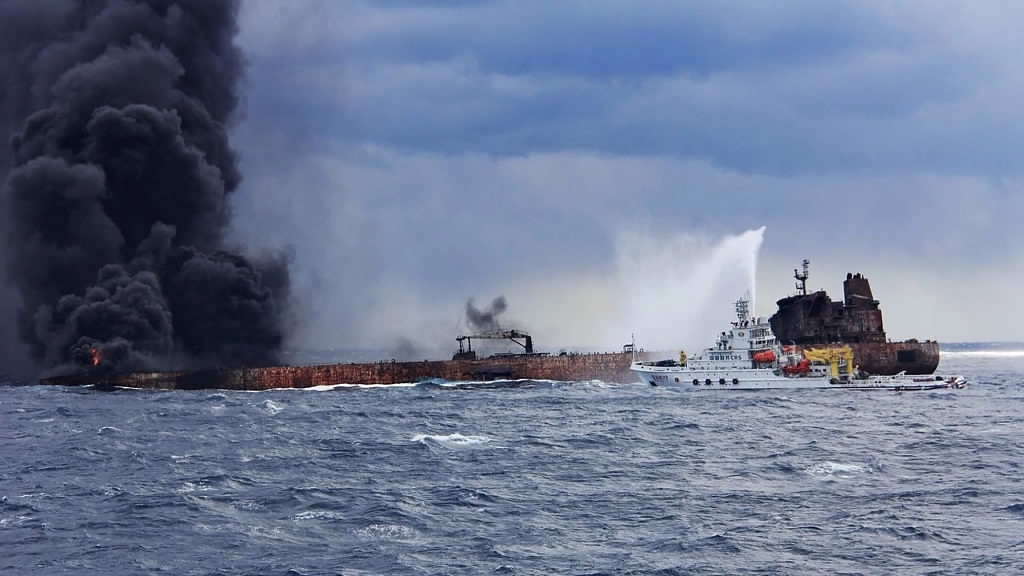 China’s Foreign Minister Wang Yi vowed on Saturday that China will continue its rescue efforts to find the missing sailors on the oil tanker.
"The Chinese government attaches great importance to the incident and will make [an] all-out effort on searching and rescuing," Wang told his Iranian counterpart Mohammad Javad Zarif in a phone call on Saturday. "As long as there's one percent of hope left, China will put 100 percent effort on rescue work."
The Iranian foreign minister expressed gratitude towards China's efforts and said Iran will keep close contact and cooperation with China on the issue.