Today at Davos: May, Macri and Malala
CGTN's Nicholas Moore 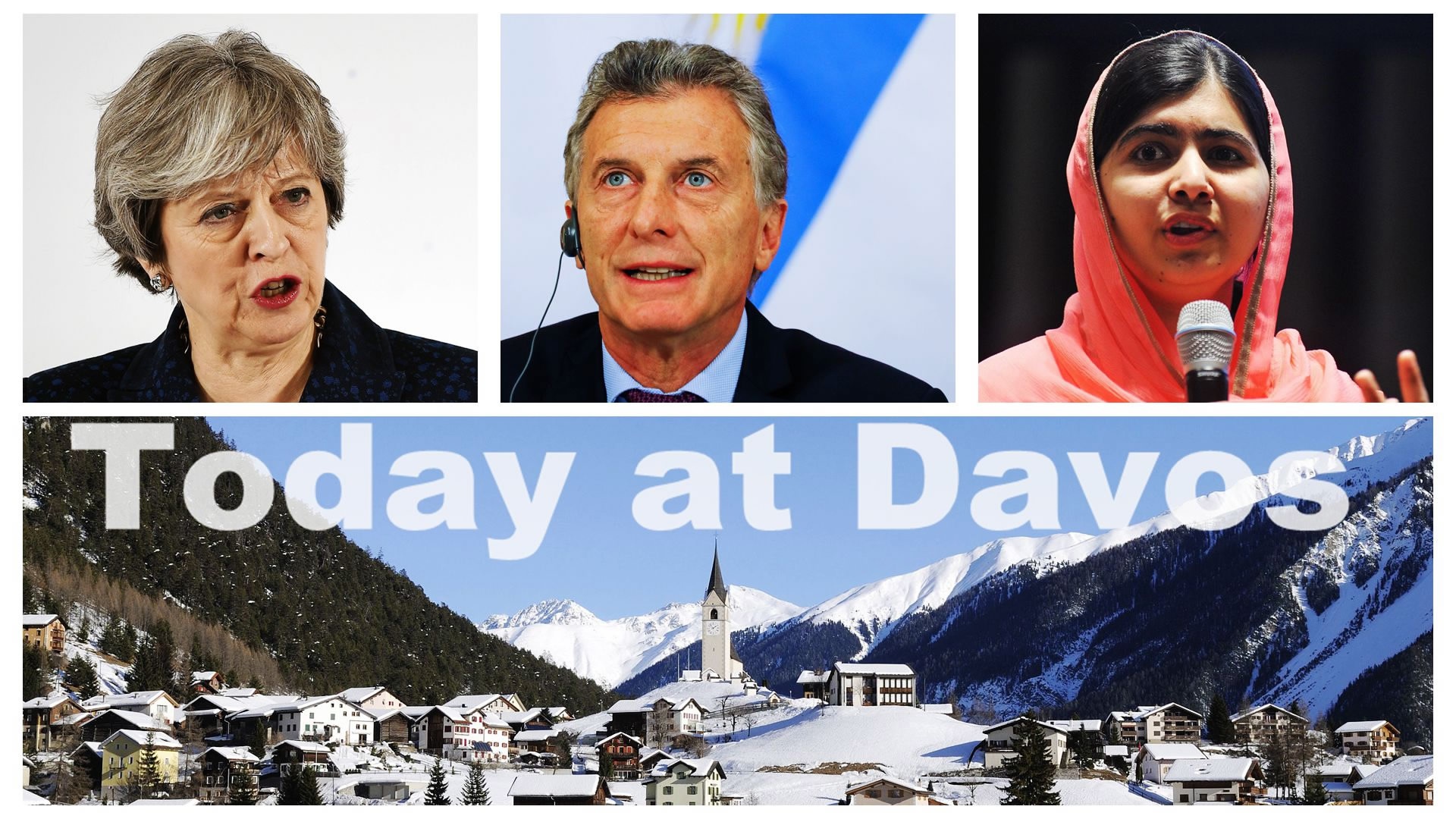 Following Liu He’s speech yesterday affirming China’s commitment to further reform and integrated development, day four at the World Economic Forum (WEF) will see UK Prime Minister Theresa May take the stage, ahead of a crucial year for Brexit negotiations. Jean-Claude Juncker, president of the European Commission, was also set to speak on Thursday but canceled due to illness.
Look out for Argentinian President Mauricio Macri, who will preview the agenda for the G20 Summit, and Nobel Peace Prize winner Malala Yousafzai, who will speak about her campaign for female education.
Read on for more on what to expect from day four at Davos.

Who? Theresa May, prime minister of the United Kingdom since July 2016. 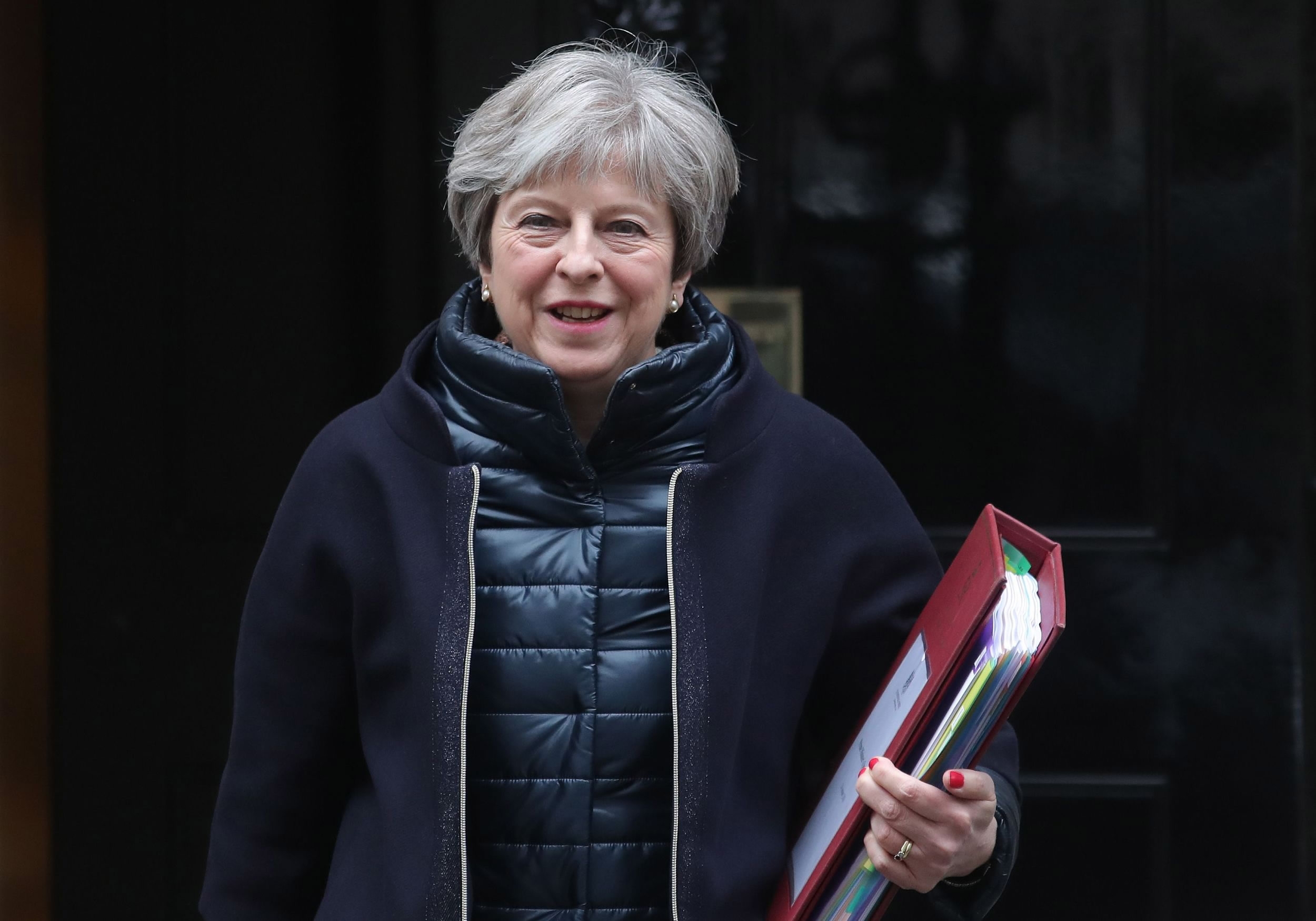 The UK's economic outlook: Low productivity and Brexit uncertainty are set to taint economic prospects in the coming years. The IMF reduced its 2019 GDP estimate for the UK to 1.5 percent ahead of the WEF, at a time when it raised its outlook for the EU, the US and developing economies.

What to expect: 2018 is again likely to see Brexit dominate the headlines, as Downing Street and Brussels enter crucial talks concerning the UK’s future relationship with the EU.

May is coming under increasing pressure back home over the economy, living standards and stagnant wages, but she will likely use Davos to again spell out that Britain remains open for business despite Brexit.

The UK has shown clear support for the Belt and Road Initiative and its relationship with China, and May is reportedly going to visit Beijing after Davos.
The UK has reportedly shown interest in joining the Comprehensive and Progressive Agreement for Trans-Pacific Partnership (CPTPP), and will be bolstered by Tuesday’s news that the deal will be signed in March.

Who? Mauricio Macri, president of Argentina since December 2015. 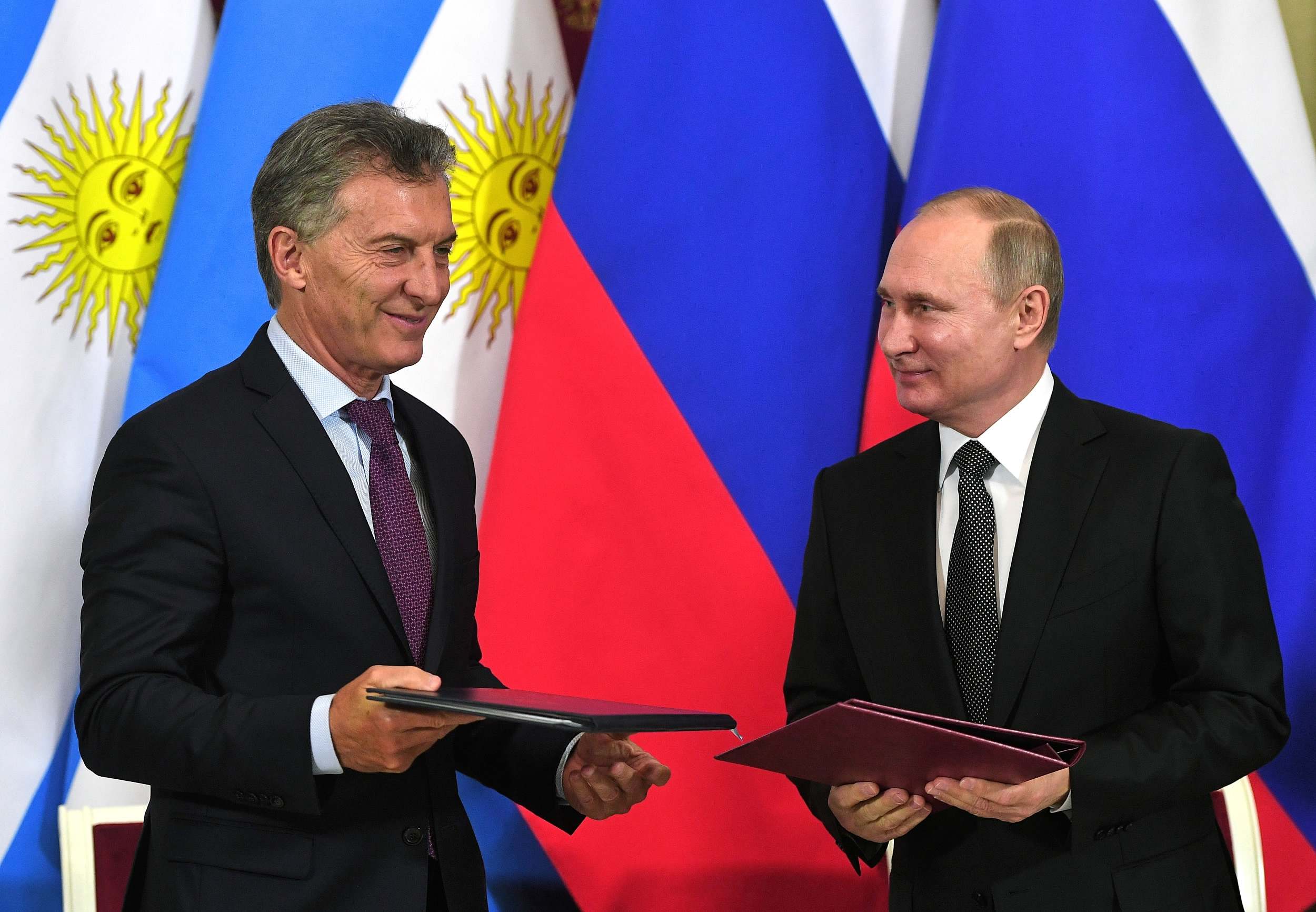 Argentina's economic outlook: The most recent IMF forecast estimated growth of 2.5 percent in 2018, on the back of the best performing stock market in the world last year.

Argentina’s benchmark index rose 77 percent in 2017, and has already grown by seven percent in 2018, built on the back of reforms led by Macri that lifted the country out of recession.

However, unemployment at nine percent remains a concern, inflation is high and the rapid rise in stock prices is causing concerns of overheating and bubbles emerging.

What to expect: Macri’s speech is set to focus on the G20 Summit, which will take place in Buenos Aires later this year. Ahead of the first G20 to be held in South America, Macri will look to use Davos to show his country has returned to the world stage.

Ahead of the WEF, Macri met with Russian President Vladimir Putin in Moscow, where the leaders signed an accord and discussed building a Russian nuclear power station in Argentina.

Education as a basic right

Who? Malala Yousafzai, the youngest recipient of the Nobel Peace Prize. 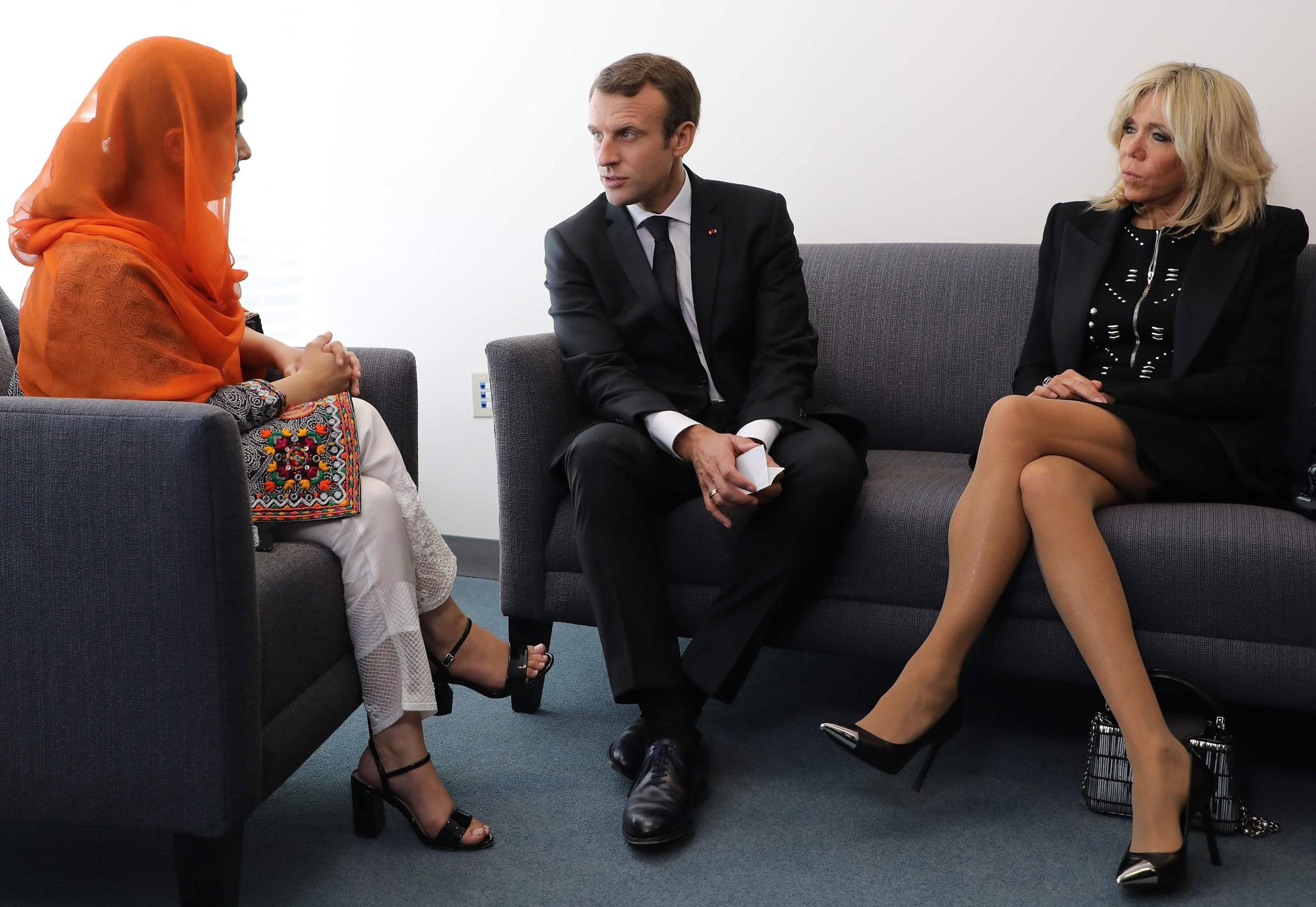 French President Emmanuel Macron and his wife Brigitte listen to Pakistani activist Malala Yousafzai during their meeting on September 20, 2017, in New York, on the sidelines of the 72nd UN General Assembly. /VCG Photo

French President Emmanuel Macron and his wife Brigitte listen to Pakistani activist Malala Yousafzai during their meeting on September 20, 2017, in New York, on the sidelines of the 72nd UN General Assembly. /VCG Photo

What to expect: Yousafzai is only 20 years old, but her role as an activist has seen a wealth of achievements in the eight years since she started writing a blog on education and her life in Pakistan under the Taliban.

The “fractured world” mentioned in the WEF’s theme this year comes amid rising anger over sexism, inequality and division. For Yousafzai, the opportunity to speak to and inspire the world’s richest and most powerful people could help to repair just a small section of this fractured world.

Zhang Yaqin, president of technology, emerging business, and global business operations at Baidu, will take part in a discussion on the impact of big tech on global industries. Reports emerged on Wednesday that Baidu would raise two billion US dollars to take on Alibaba and Tencent in financial services.
Some of the world’s biggest figures in the energy industry will be discussing how renewable energy can transform the world, with China’s State Grid Corporation chairman Shu Yinbiao giving his insights. 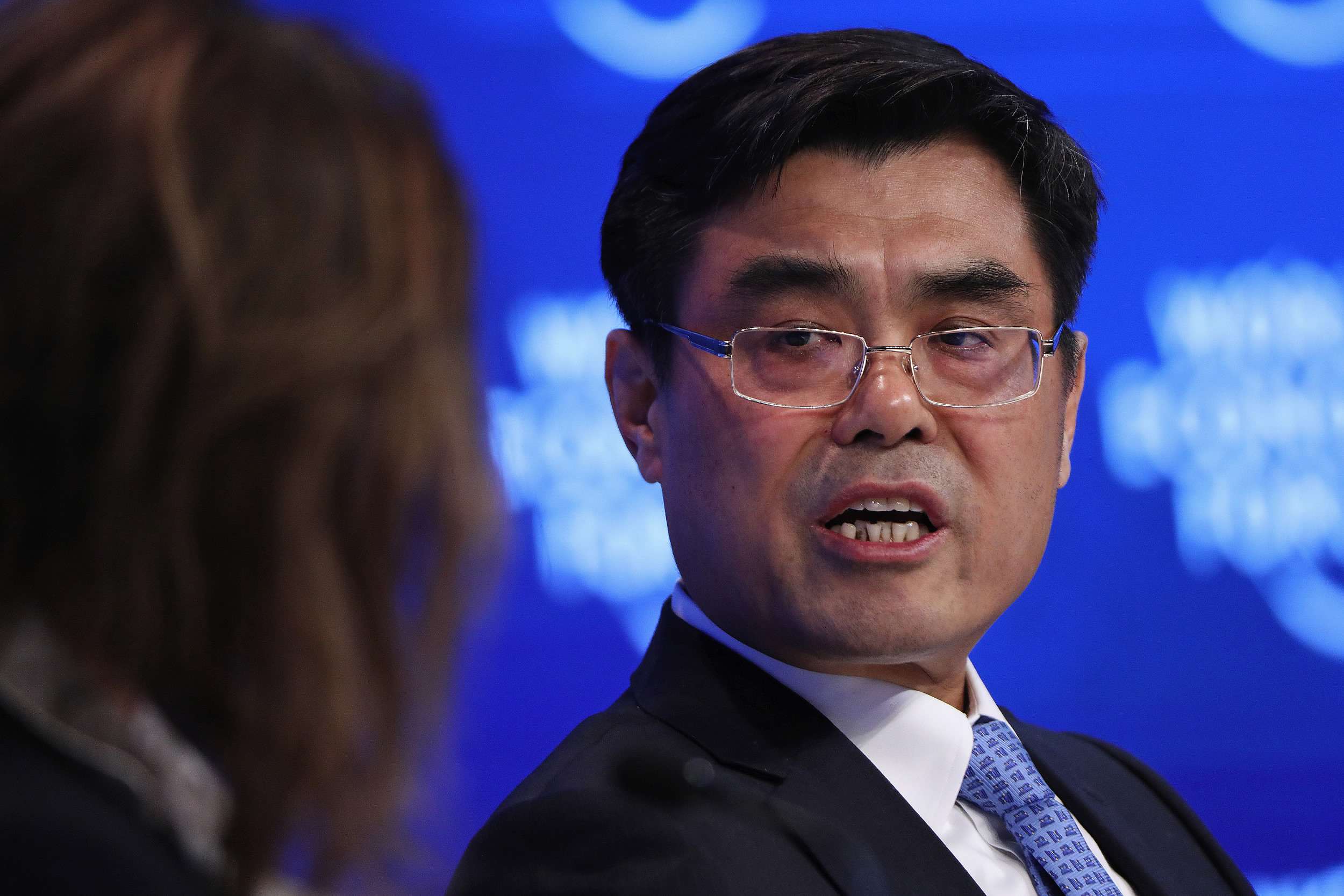 Shu Yinbiao, chairman of State Grid Corporation of China, speaks during a panel session at the World Economic Forum in Davos, Switzerland on January 17, 2017. /VCG Photo

Shu Yinbiao, chairman of State Grid Corporation of China, speaks during a panel session at the World Economic Forum in Davos, Switzerland on January 17, 2017. /VCG Photo

Jin Keyu, a leading Chinese professor of economics at the London School of Economics will appear alongside figures such as IMF chief Christine Lagarde, UK Chancellor of the Exchequer Philip Hammond and US Treasury chief Steven Mnuchin to talk about “The Remaking of Global Finance.”

Anything else to look out for?

Israeli Prime Minister Benjamin Netanyahu will address Davos one day before key ally US President Donald Trump gives a much-anticipated speech. Netanyahu has already held several meetings on the sidelines of the WEF with other leaders, urging them to support amendments to the Iran nuclear deal. King Abdullah II of Jordan will also be looking to attract investment to his country, and could also use Davos as an opportunity to speak out against the controversial White House decision to move the American embassy in Israel to Jerusalem.