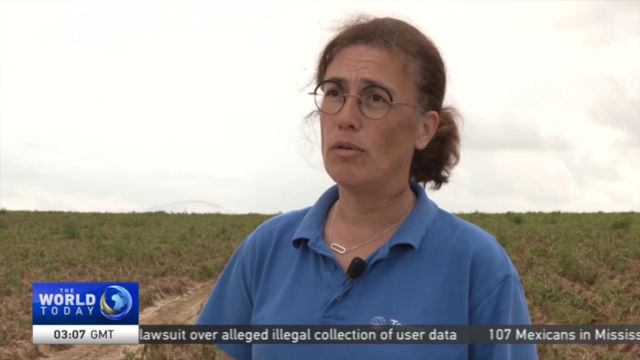 After two record heat-waves in July, Europe is suffering from an intense drought, for the second year in a row. In France, nearly two- thirds of all regions are affected by water restrictions. Farmers have seen their crops destroyed, while others try to adapt as much as possible to climate change. CGTN's Stefan de Vries reports from Paris.
CHARLOTTE VASSANT FARMER "The farm was my grandfather's and before that, we have lived here for several generations."
Charlotte grows beets, carrots, onions and potatoes on 180 hectares. A tough job, but this year it is even more difficult than usual. Because of the drought, her harvest will be much smaller than previous years.
CHARLOTTE VASSANT FARMER "We have a much lower yield, and maybe tomorrow some farms will have to close, because we will no longer be capable to grow the right plants in the right place. If we don't make any technological progress, we'll be in trouble. These are so small, no grains have been formed yet. You see these, the leaves have burned."
The lack of water and the high temperatures impact crops, but also cattle. Nearly 140 kilometers from Charlotte, farmer Luc Smessaert has been raising cows for over two decades.
LUC SMESSAERT, VICE PRESIDENT FRENCH NATIONAL FARMERS UNION FNSEA "This year, we have a water deficit of 50 percent. The animals don't have any grass to eat, and we started feeding them with the food we had stocked for the winter."
STEFAN DE VRIES PICARDIE, FRANCE "July 2019 was the hottest month ever recorded. And even farmers in Northern Europe, like here in Northern France, but also in the Netherlands and Germany, they will have to adapt to climate change. Because these temperatures looked exceptional, but now seem to become the new normal."
LUC SMESSAERT, VICE PRESIDENT FRENCH NATIONAL FARMERS UNION FNSEA "These periods of drought now repeat itself regularly, and they last longer, last year from July to November and this year, no rain since June."
As the Vice-President of the National Farmers Union, Luc is mobilizing politicians in France and Europe.
LUC SMESSAERT, VICE PRESIDENT FRENCH NATIONAL FARMERS UNION FNSEA "We have to invest in research and development, find the right crops, that better resist against the drought. The whole of Europe has to rethink its agricultural politics. We have to help farmers, help them to assess the risks. Anyhow, we will adapt. But we need to produce food, in quantity."
That's exactly what Charlotte tries to do. She is now changing the way she is farming.
CHARLOTTE VASSANT FARMER "We are planting earlier, like rapeseed, because we have less rain. I'll plant them next week. We are looking for seeds that resist better to drought, like cereals. And five years ago, I installed an irrigation system."
STEFAN DE VRIES PICARDIE, FRANCE "Not all farmers have the means to change and invest in the future. So they risk losing their businesses. This is Stefan de Vries, in Picardie, in the North of France, for CGTN."
SITEMAP
EXPLORE MORE
DOWNLOAD OUR APP