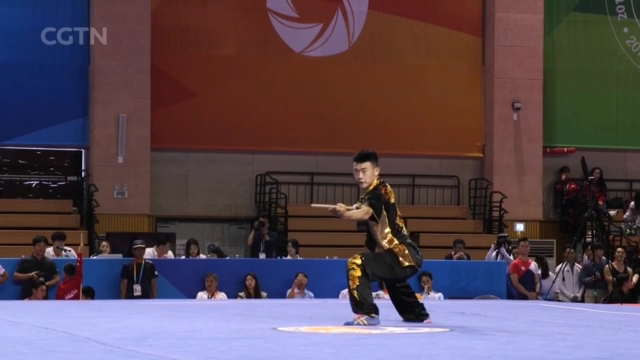 Now let's head to South Korea for the World Martial Arts Masterships, the mega-event bringing together athletes from more than 100 nations and regions in 20 different combat sports, including the Chinese discipline of Wushu. CGTN's Jack Barton has more on the scope of this gathering, which for some athletes, will be a gateway to the 2020 Tokyo Summer Olympics.
China's Kung Fu discipline Wushu being contested at the World Martial Arts Masterships in Chungju, South Korea. It's the first time China's Bin Liu has traveled to an overseas tournament. He won gold but says fighting sports are the biggest winner at this martial arts mega-event.
LIU BIN MEN'S GUNSHU GOLD MEDALIST "We need to hold more martial arts competitions, we need to promote them to all citizens around the world, and we need to let children practice martial arts, and in this way, we can further develop martial arts."
Organizers say that is the aim of this competition that brings together thousands of professional and amateur athletes from more than 100 countries to compete in 20 disciplines.
AN CHANG-BUM SOUTH KOREA TAEKWONDO COACH "The last event was mostly amateurs, but this edition has higher level athletes, who are already the best competitors in the world."
JACK BARTON CHUNGJU "For most of the disciplines, winning at the Masterships means a gold medal, but for some of the Taekwondo events, it means selection for an even bigger event."
The gold medalists in a new Taekwondo discipline called Kyorugi will head to the Tokyo Olympics.
AN CHANG-BUM SOUTH KOREA TAEKWONDO COACH "The selected athletes will hold a showcase at next year's Tokyo Summer Olympics, in the process, to qualify for becoming an official event."
Iran will be heading to Tokyo, but the losing Korean team still managed to clinch gold in the freestyle Poomsae.
KIM JIN-MAN MIXED FREESTYLE POOMSAE GOLD MEDALIST "We got a good result from this competition, and I can hold up the gold medal with pleasure."
KWAK RYEO-WON MIXED FREESTYLE POOMSAE GOLD MEDALIST "This event has increased, both in the number of martial arts, and also in size. This festival is also being celebrated with performances and fireworks. You see everyone reveling together, unlike at a conventional formal competition, and the athletes can come together as one."
The Organizing Committee hopes the event can eventually be on a par with the Olympic Games. In the meantime, they've ensured South Korea is now home to the world's biggest and most spectacular martial arts event, with no serious competition. Jack Barton, CGTN, Chungju.
SITEMAP
EXPLORE MORE
DOWNLOAD OUR APP