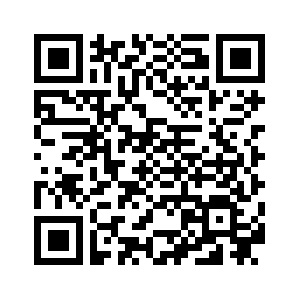 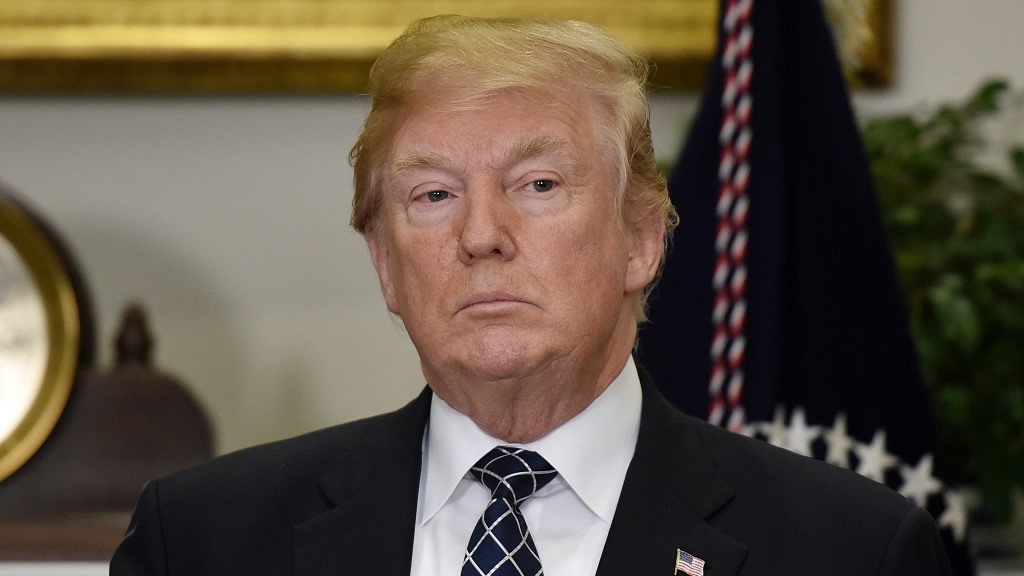 US President Donald Trump said on Friday he will extend sanctions relief on Iran under the 2015 nuclear deal for the last time, threatening a US withdrawal from the landmark pact unless US Congress and European allies can fix the alleged "disastrous flaws."
"Despite my strong inclination, I have not yet withdrawn the United States from the Iran nuclear deal," Trump said in a statement. "Instead, I have outlined two possible paths forward: Either fix the deal's disastrous flaws, or the United States will withdraw."
"This is a last chance,” Trump said, pushing for a separate agreement. “In the absence of such an agreement, the United States will not again waive sanctions in order to stay in the Iran nuclear deal. And if at any time I judge that such an agreement is not within reach, I will withdraw from the deal immediately.”
The US president must sign a waiver suspending the US sanctions on Iran every 120 days. 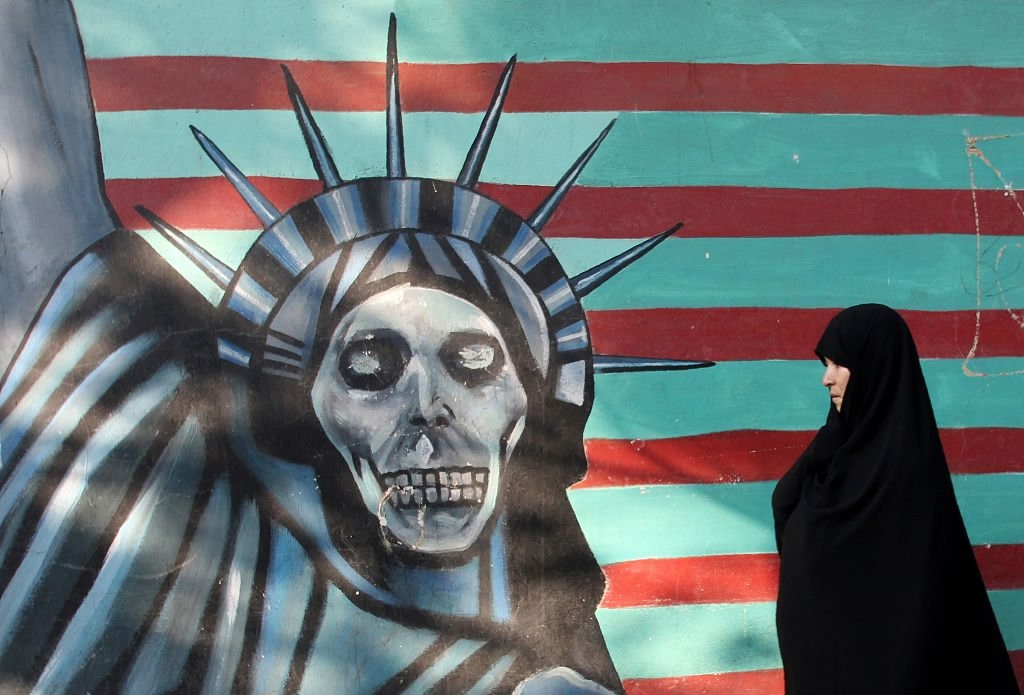 An Iranian woman walks past a mural on the wall of the former US embassy in the Iranian capital Tehran on November 9, 2016. /VCG Photo

An Iranian woman walks past a mural on the wall of the former US embassy in the Iranian capital Tehran on November 9, 2016. /VCG Photo

Calling it "one of the worst" deal the United States has ever made, Trump, who has signed the waiver twice since taking office, decertified to Congress Iran's compliance with the pact last October.
As Trump agreed to the sanctions relief, US Department of Treasury said on Friday that it has imposed new sanctions on 14 individuals and entities over Iran's alleged human rights abuses and ballistic missile program, including head of Iran's judiciary and the cyber unit of the Islamic Revolutionary Guard Corps.
The US has sanctioned around 100 individuals and entities involved with Iran's ballistic missile program and other activities which the United States saw as "illicit," according to Trump's statement on Friday.
The nuclear deal is formally known as the Joint Comprehensive Plan of Action (JCPOA). It was struck between Iran and six world powers, namely the US, the UK, Russia, France, China, and Germany, in 2015, after many years of negotiations. It was widely reported as a historic accord back then. 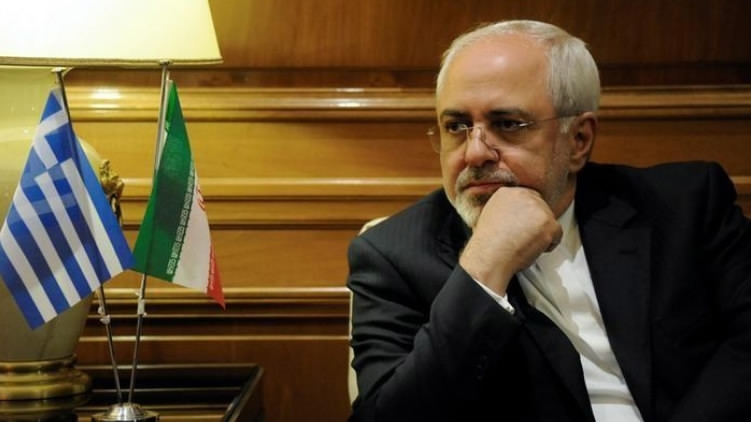 Iran's Foreign Minister Mohammad Javad Zarif said Friday Trump's latest attacks on the nuclear deal were a "desperate effort" to undermine an accord that cannot be renegotiated.
"Trump's policy & today's announcement amount to desperate attempts to undermine a solid multilateral agreement," Zarif tweeted after Trump reluctantly agreed to continue to waive sanctions under the deal, but warned it could be the last time.
"JCPOA is not renegotiable: Rather than repeating tired rhetoric, US must bring itself into full compliance – just like Iran," Zarif added, using the technical name for the 2015 nuclear deal. 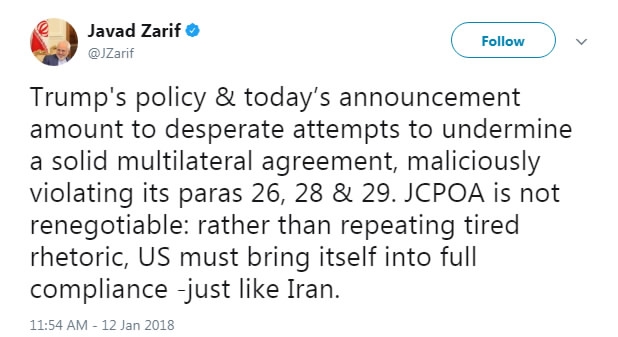 Zarif said Washington was already "maliciously violating" three sections of the agreement, including paragraph 26 which requires the US to "make best efforts in good faith to sustain this JCPOA and to prevent interference with the realization of the full benefit by Iran of the sanctions lifting."

The other signatories to the deal – Britain, China, France, Germany and Russia – and the European Union, which oversaw the talks, were watching carefully.
The British and German foreign ministries said they had taken note of the decision and would confer with France before deciding on a course of action.
"The UK has a clear position on the Iran nuclear deal: We regard it as a crucial agreement that makes the world a safer place by neutralizing the threat of a nuclear-armed Iran," the British Foreign Office said. 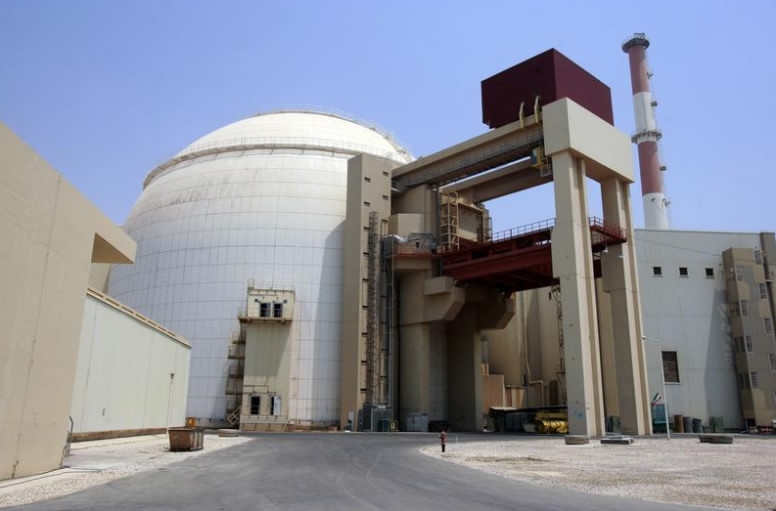 The EU said it would hold internal consultations and was "committed to the continued full and effective implementation" of the deal.
French President Emmanuel Macron called Trump on Thursday and stressed France's determination to see "the strict application of the deal and the importance of all the signatories to respect it."
And Russia spoke out strongly in favor of the accord, calling it "the result of a consensus among many parties."
UN inspectors have certified Iran's compliance with the deal nine times, most recently in November.

How was the historic deal reached?

The Iran nuclear issue began to heat up in 2002, after opposition within Iran revealed the government was building two secret nuclear sites – a uranium enrichment plant and research lab at Natanz and a heavy water production plant in Arak. Tehran has always insisted that its nuclear work is peaceful, but it was feared that its nuclear activities could help the country build a nuclear weapon.

Multiple rounds of talks to freeze Iran’s nuclear program were held afterwards, with little progress. A series of four UN sanction resolutions began in 2006, with separate US and EU punishments. The sanctions largely crippled Iran's economy.
In 2013, negotiations started to take a turn after still-incumbent President Hassan Rouhani assumed office. A deal was finally clinched in July of 2015.
Under the pact, Iran needs to remove more than two-thirds of its 20,000 centrifuges. Its uranium stockpile is set to be reduced by 98% to 300 kilograms for 15 years. Tehran must also keep its level of enrichment at under 3.67%. 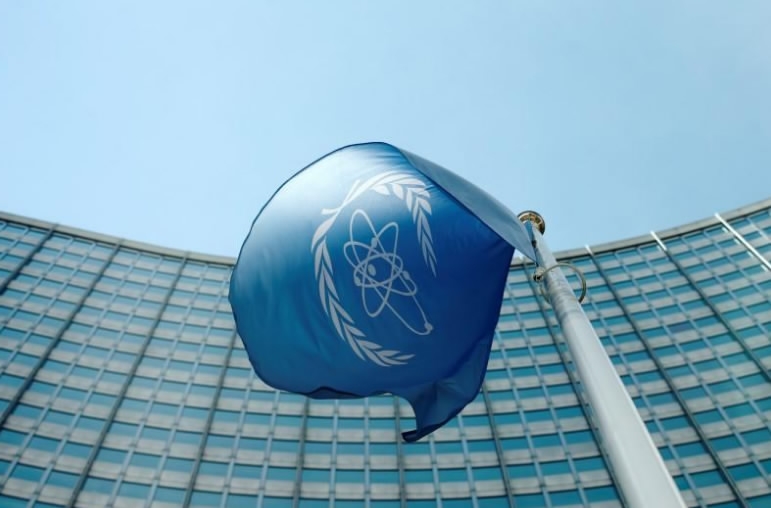 The flag of the International Atomic Energy Agency (IAEA) flies in front of its headquarters in Vienna, Austria. /Reuters Photo

The flag of the International Atomic Energy Agency (IAEA) flies in front of its headquarters in Vienna, Austria. /Reuters Photo

The country's right to peaceful use of nuclear energy was acknowledged. But it must allow the global nuclear watchdog, the International Atomic Energy Agency (IAEA), to conduct more checks to prove the program is indeed peaceful.
The then-US president Barack Obama said the deal cut off every pathway to a nuclear weapon for Iran.
In exchange, major sanctions on Iran would be lifted, including restrictions on its banking system and oil exports. But the punitive measures could be reinstated if Iran was found to violate the pact.
Sanctions began to be lifted in January 2016, after the IAEA verified that Iran met its commitments. Over the past year, Iran claimed it completely obeyed the deal. The claim was endorsed by the IAEA and the wider international community.
(With inputs from AFP and Xinhua)