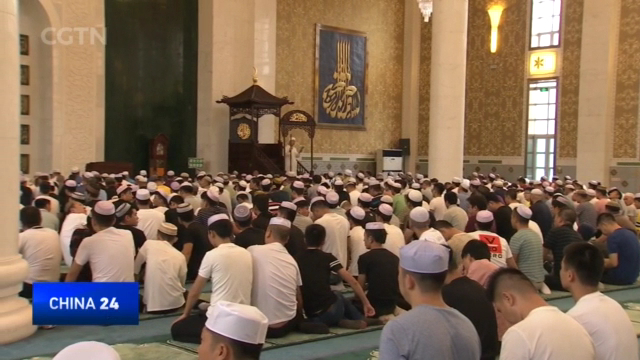 Muslims in China celebrate the Corban Festival, also known as Eid al-Adha or the feast of the sacrifice every year. This year in Beijing, celebrations were held in various locations on Sunday. Our reporter Zheng Yibing visited a mosque in the city and filed this report.
The grand hall and melodious chanting. Muslims here celebrated Corban festival with prayers. It's one of the most important Muslim holidays and has a great significance for people of the faith.
YANG SHILIN DIRECTOR, MANAGEMENT COMMITTEE BEIJING DOUDIAN MOSQUE  "The biggest meaning of the festival is that one should give love and take care of others. For example, sharing the feast of the sacrifice like mutton with those in need."
To mark the occasion, Muslims sacrifice livestock to commemorate Prophet Abraham's submission to God. They believe God appeared to the Prophet in his sleep and ordered him to sacrifice his son as an act of obedience, but when he was about to do it, God sent him a sheep to sacrifice instead.
ZHENG YIBING BEIJING "As another important part of the Corban Festival, Muslims share delicacies and send greetings."
In the mosque, free food is offered and shared, like deep-fried dough cake and mutton soup.
YANG SHILIN DIRECTOR, MANAGEMENT COMMITTEE BEIJING DOUDIAN MOSQUE "Food will be divided into three parts: One for the family, one for relatives and friends, and the rest goes to charity."
"For us, this is the biggest festival and an important one, and we are happy to gather here to celebrate it all together."
"All gardeners and sanitation workers in our town are particularly invited. And we are very grateful for the shared love."
The Corban Festival has been passing on through generations among Muslims in China. Today, the tradition is well preserved and protected, and it sends a message of faith and love for family, friends and even strangers. Zheng Yibing, CGTN, Beijing.
SITEMAP
EXPLORE MORE
DOWNLOAD OUR APP