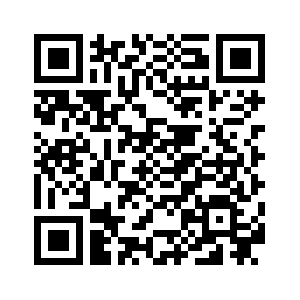 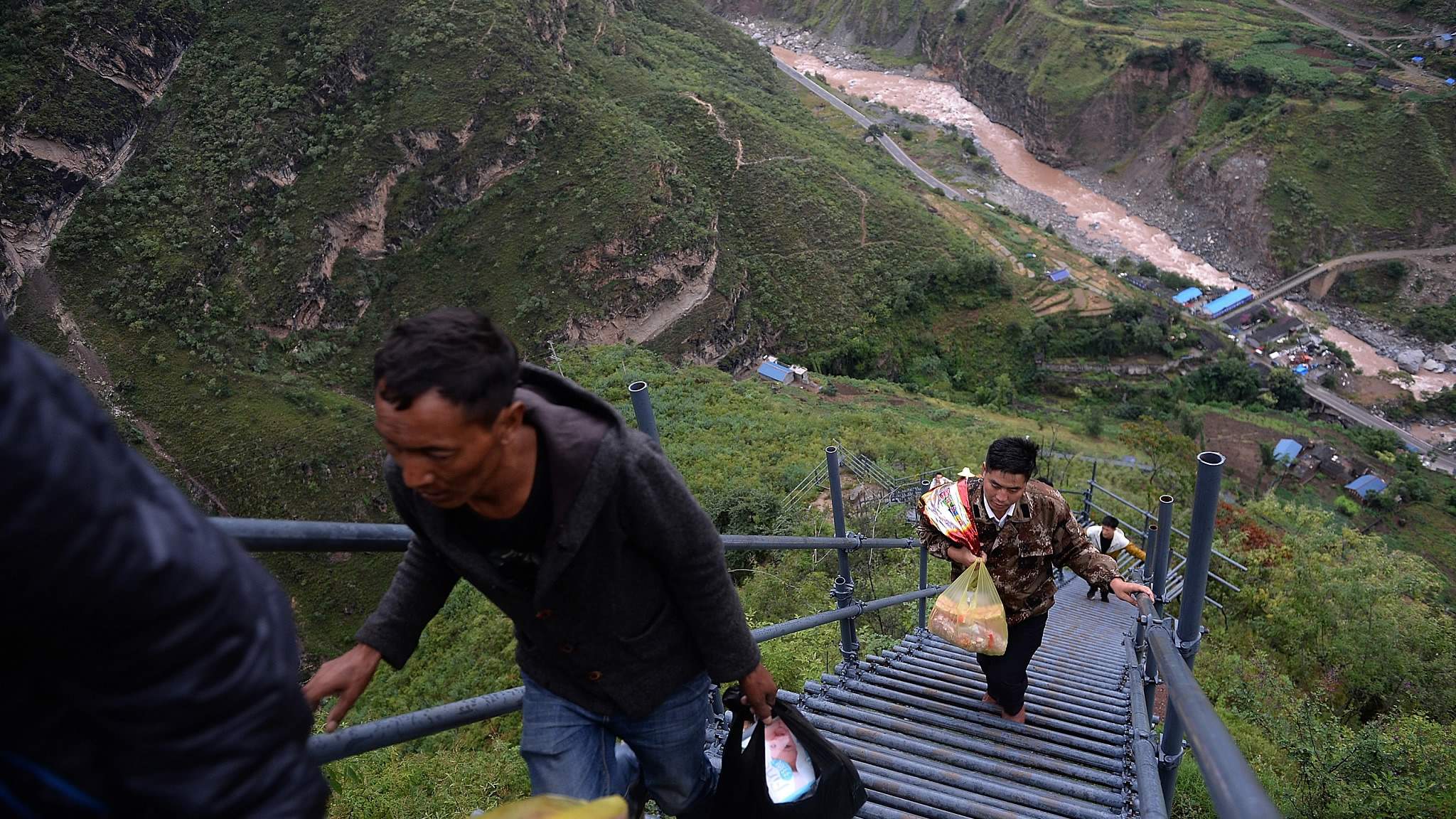 Herding sheep and running up and down the staircase built on a cliff, 24-year-old Mose Labo streams online his life every day to make money. He began broadcasting his daily activities on social media platforms after Internet was introduced into Atuleer Village of Zhaojue County, also known as the cliff village, in southwest China’s Sichuan Province.
The young man might now attract more fans as the local government is planning to turn his village into a vacation resort. The county authorities announced on Saturday that Atuleer Village would receive 630 million yuan (97.5 million US dollars) in investment to start a tourism project. 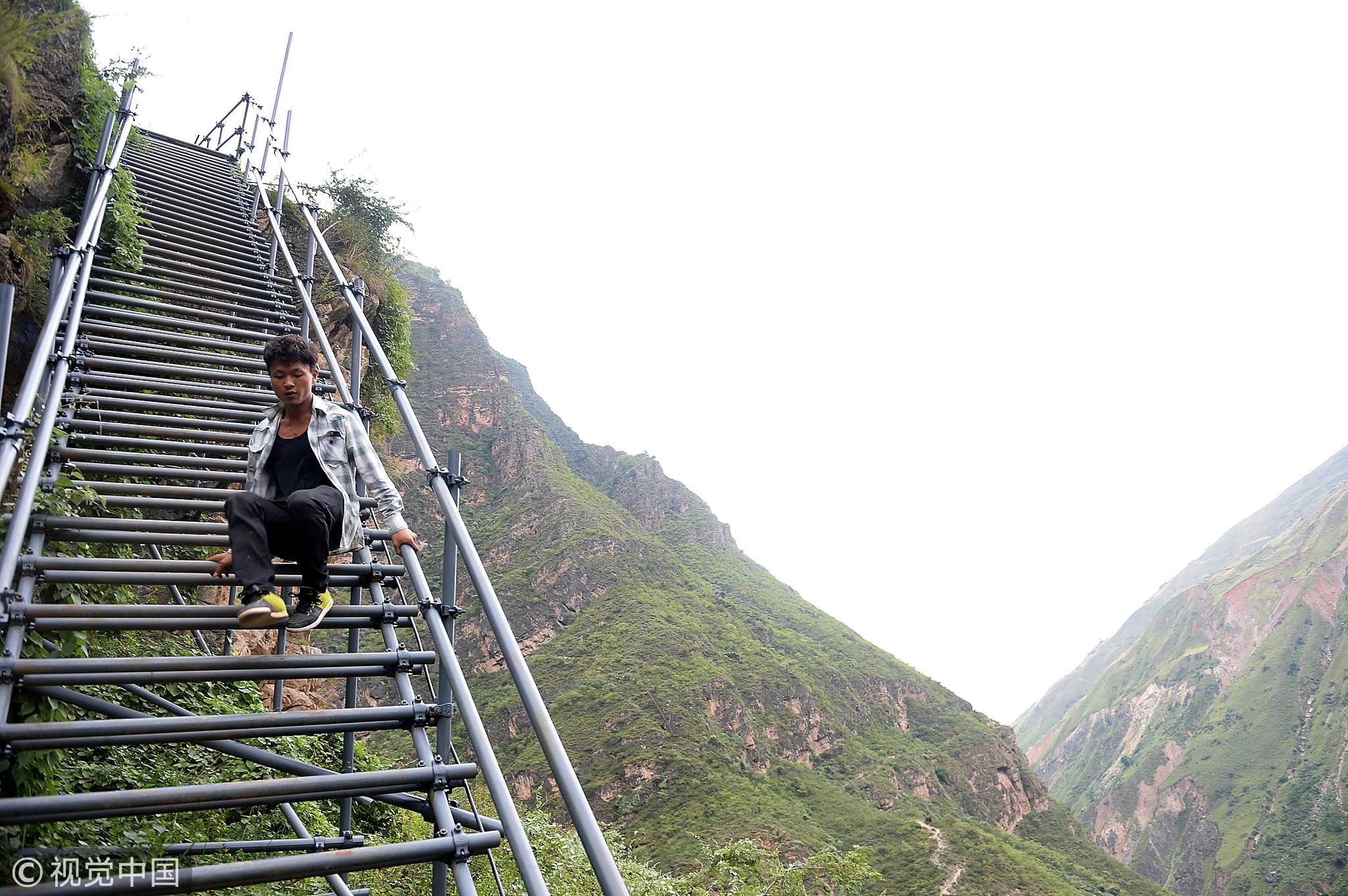 The three-phase project, led by Sichuan Provincial Investment Group Co. Ltd and Chengdu Tianyou Tourism Group Company, aims to transform the cliff village into a resort featuring Yi ethnic culture. It is expected to be completed by 2022.
Atuleer Village is located in the Liangshan Yi Autonomous Prefecture where a large number of people from the Yi ethnic minority reside. The village gained fame in 2016 after pictures circulated online of school-age children using vine ladders on a cliff every time to get in and out of the village.
Students had to climb down an 800-meter-high cliff using 17 vine ladders to reach their school, spending an hour in precarious conditions.
There have been accidents in which villagers fell off the ladders. 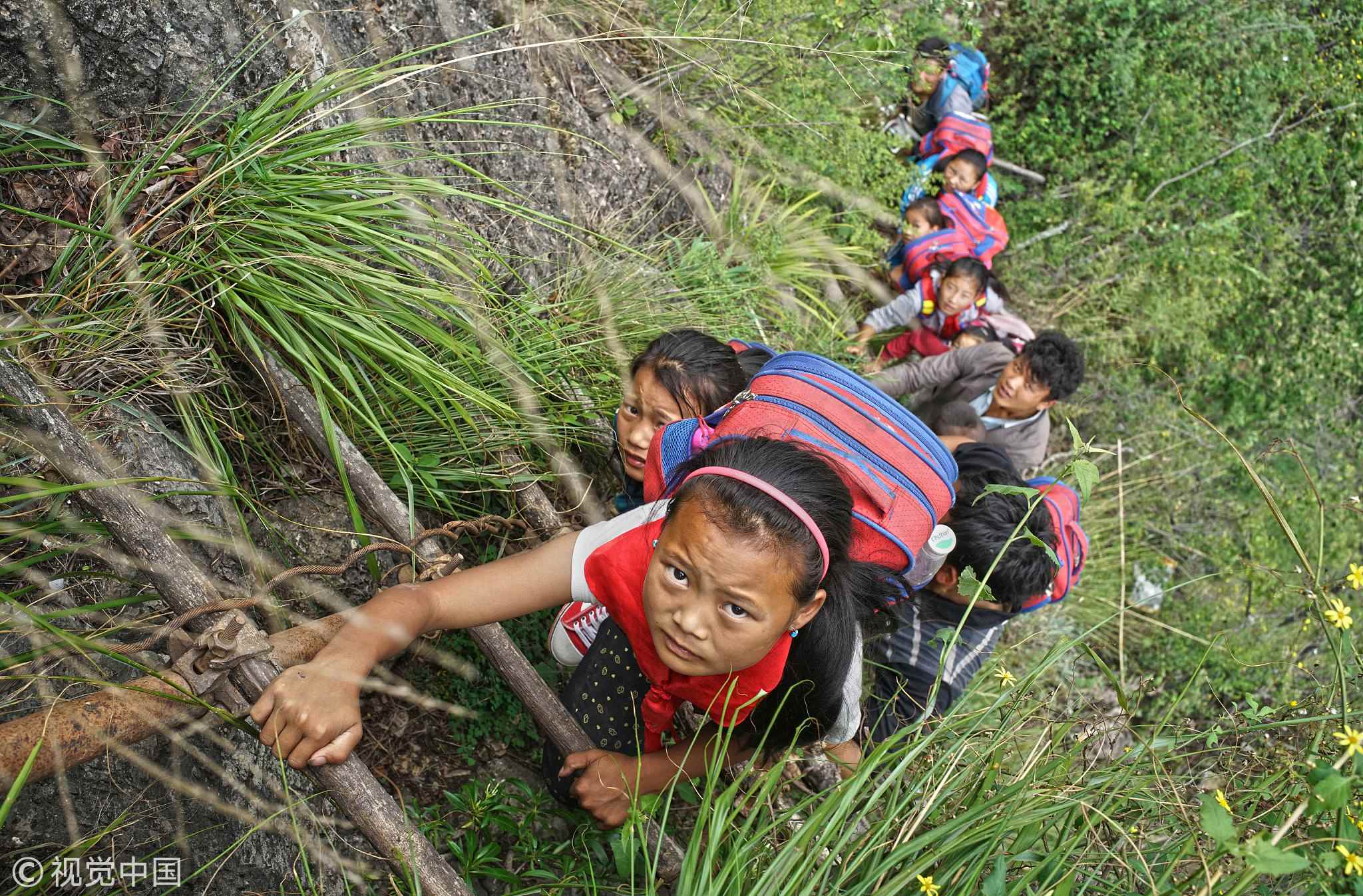 Local authorities began building steel stairs to replace the old vine ladders in mid-2016. The staircase, consisting of over 6,000 steel pipes, was put into use on June 30, 2017, allowing villagers to go down the cliff, faster and safer. 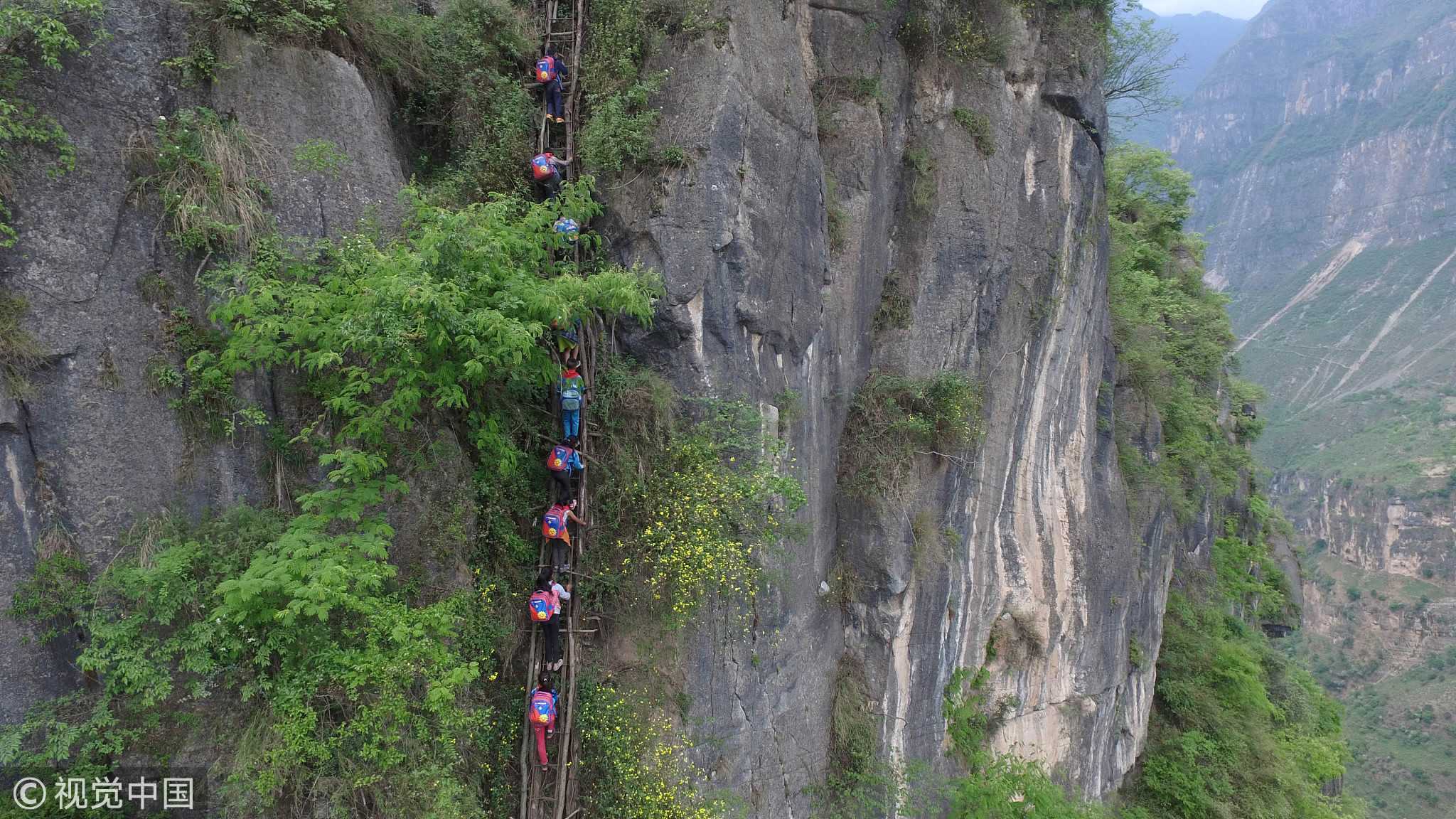 Tourists began visiting the village after the staircase was built. Some villagers turned their homes into small hotels to accommodate the increasing number of visitors. Villagers said that over 100 tourists can visit the village of 400 residents in one day.
Young people in the village began live streaming when Internet was introduced to the village around the same time the steel stairs were set up.
Mose Labo films himself running down the stairs he helped build, finishing the run in just 18 minutes. His friend Yang Yang streams about local products like honey and walnuts to boost their sales. 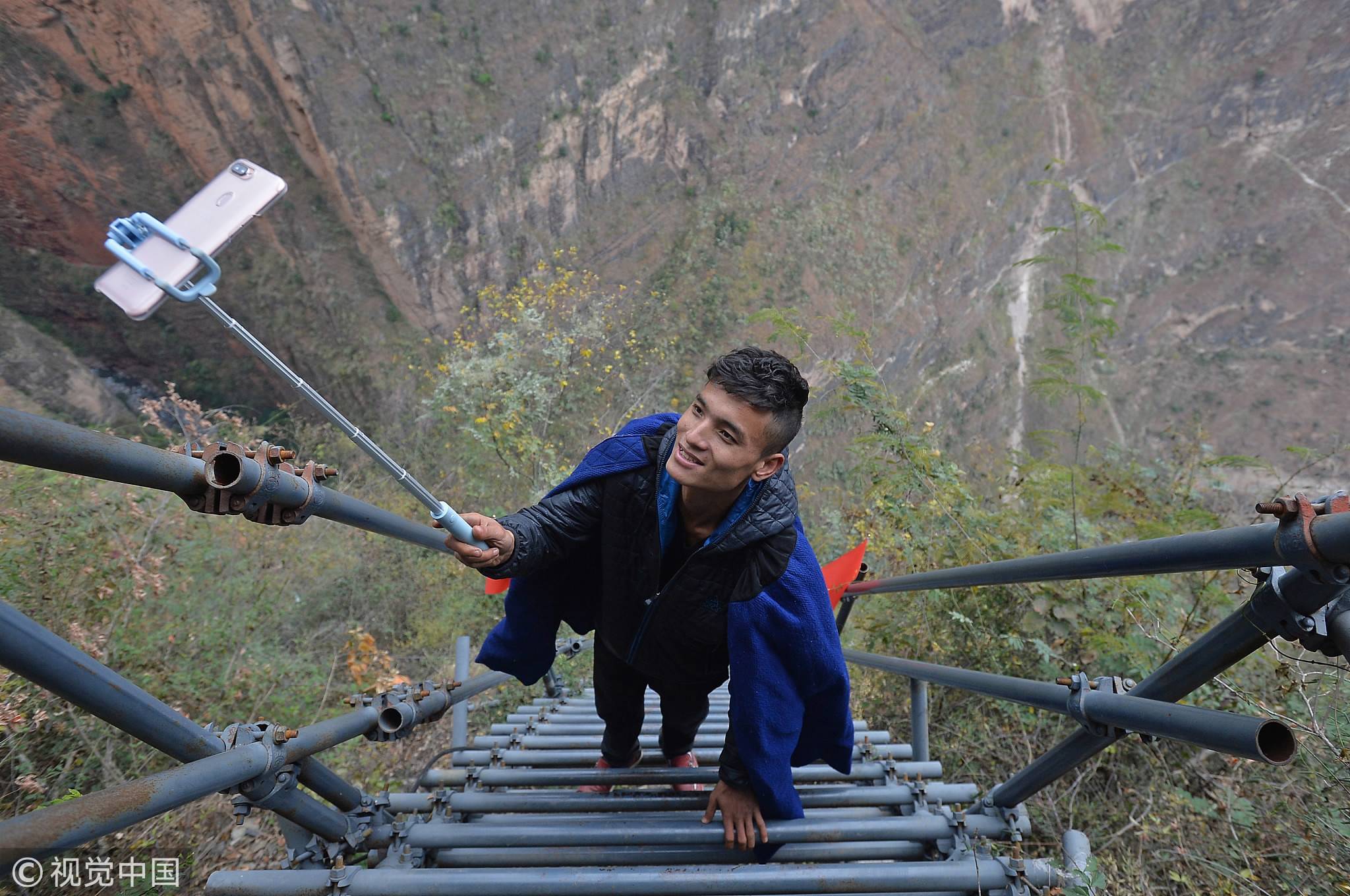 Atuleer Village hopes that the new project would bring in more tourists and increase the villagers' income. Awu Muniu, Party chief of Zhiermo Town's CPC committee, said the natural resources around the cliff village would be a huge asset for local tourism.
"We have forests, hot springs, and karst caves and we invite tourists to come and enjoy the Yi ethnic culture.”