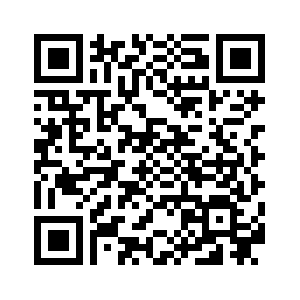 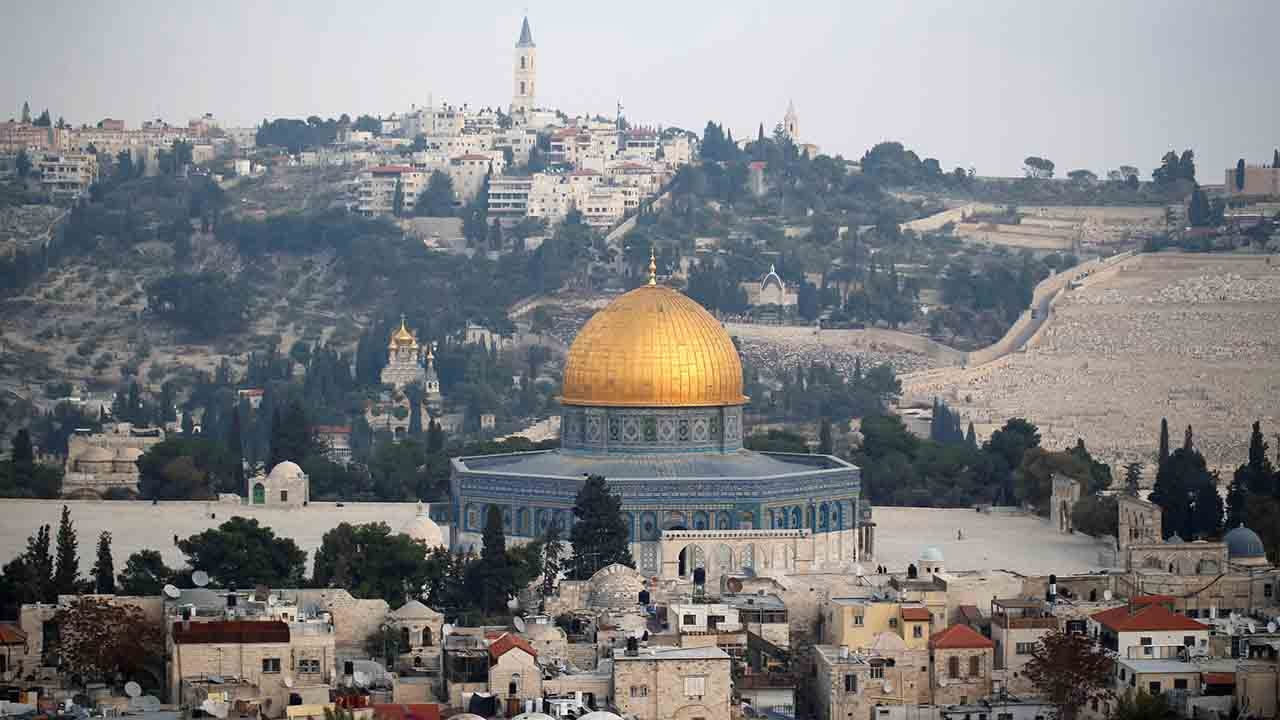 ‍US President Donald Trump’s plan to recognize Jerusalem as the Israeli capital met with worldwide condemnation after Trump spoke with several Arab leaders on Tuesday outlining his intention ahead of a formal announcement on Wednesday.
Arab countries, the UN and EU have voiced strong concerns over the unilateral US action.
Trump is set to recognize Jerusalem as Israel's capital on Wednesday, flipping decades of cautious US policy and ignoring warnings that it was a historic blunder that could spark unpredictable violence in the Middle East.
Trump was due to make the landmark announcement at 1 p.m. (1800 GMT) from the White House, according to reports that cite a senior US official. 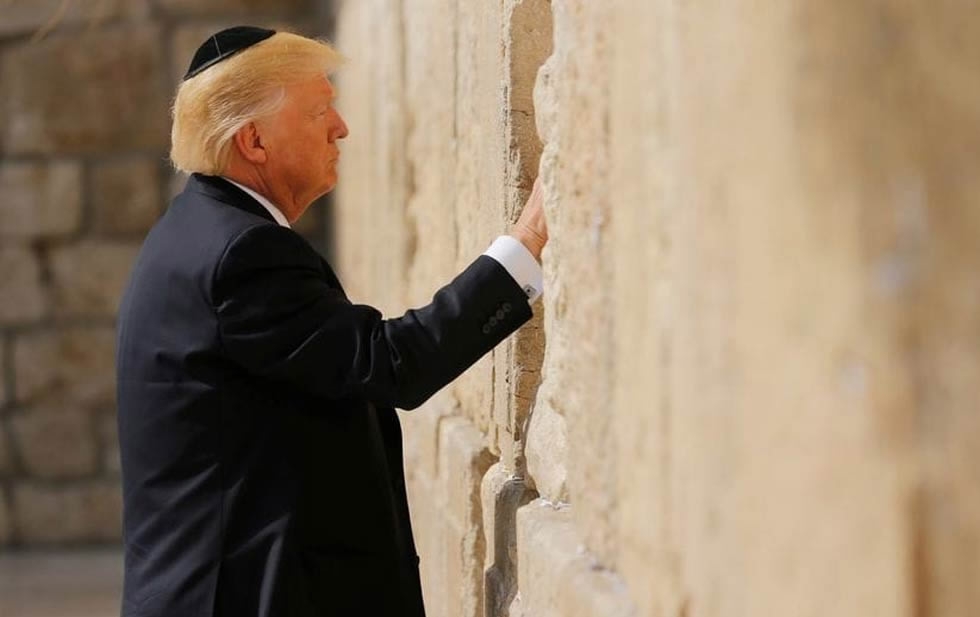 US President Donald Trump places a note in the stones of the Western Wall, Judaism's holiest prayer site, in Jerusalem's Old City, May 22. /Reuters Photo

US President Donald Trump places a note in the stones of the Western Wall, Judaism's holiest prayer site, in Jerusalem's Old City, May 22. /Reuters Photo

"He will say that that the United States government recognizes that Jerusalem is the capital of Israel," a senior administration official said, speaking on condition of anonymity. "He views this as a recognition of reality, both historic reality," the source added, "and modern reality."
However, the US president may delay the plan to move the US embassy to Jerusalem from Tel Aviv by six months for “logistical reasons,” according to media reports.
"It will take some time to find a site, to address security concerns, design a new facility, fund a new facility and build it," the official said, indicating that the move will not be immediate. "It will be a matter of some years, it won't be months, it's going to take time."
On Tuesday, Trump spoke to his Palestinian and Egyptian counterparts as well and the kings of Saudi Arabia and Jordan telling them he’s preparing to move the US embassy in Israel from Tel Aviv to Jerusalem, drawing statements of condemnation from each of these countries as well as other countries in the Middle East and international powers.
Trump also spoke to Israeli Prime Minister Benjamin Netanyahu, who has been urging the US to move the embassy to Jerusalem for years.

Palestinians call for 'day of rage' 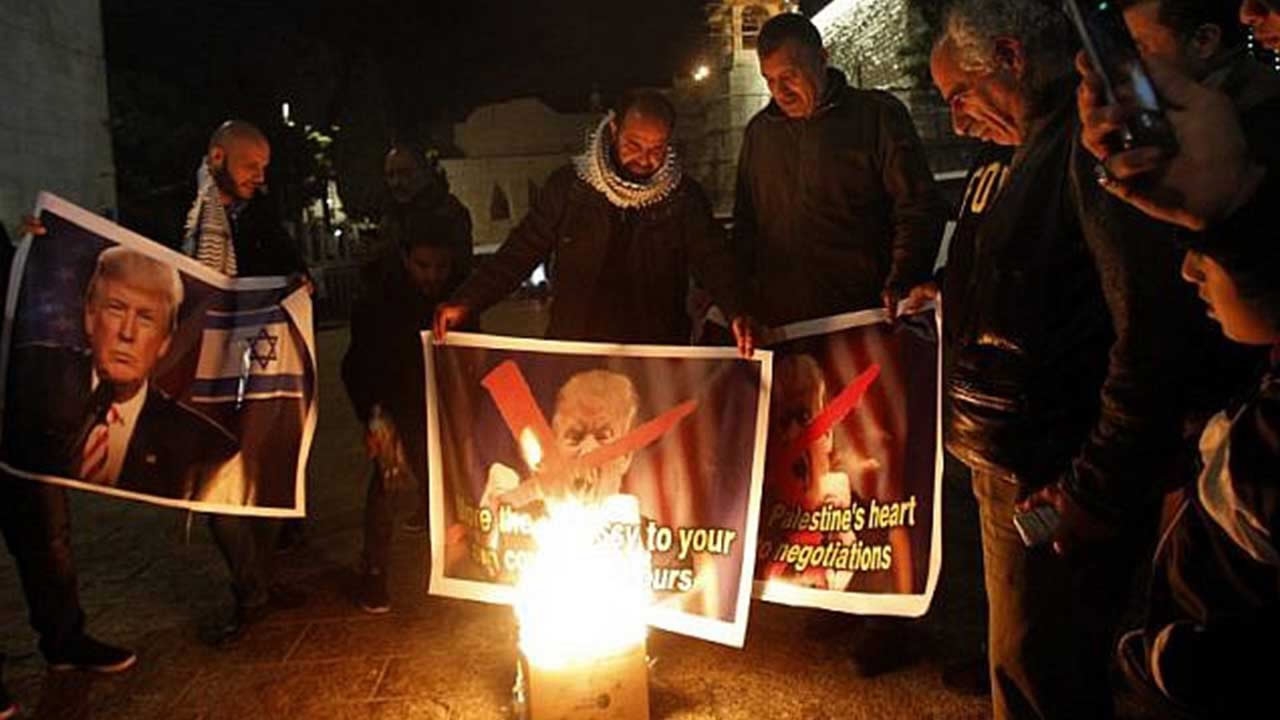 The Palestinians vociferously protested Trump’s plan warning it could have serious implications for US-led peace efforts in the Middle East.
Nabil Abu Rdeneh, a spokesman for the Palestinian President, said Mahmoud Abbas told Trump during the phone call that moving the embassy to Jerusalem and recognizing the city as Israel's capital "would be unacceptable and would be rejected completely by the Palestinian side."
Thousands of Palestinian protesters took to streets burning posters of Trump to voice their anger at the proposed US move.
"We burned Trump pictures here to send a message for the Americans, to Trump himself to all the people all over the world that we will not accept to move the (American) embassy from Tel Aviv to Jerusalem," said Munther Amira, a Palestinian activist, after participating in a protest outside the Church of Nativity in the biblical Palestinian city of Bethlehem.
"Jerusalem is the Palestinian capital. By moving this embassy Trump is passing all the red lines in politics. We as Palestinians, we will continue fighting to be and to make Jerusalem as our own capital."
In the Gaza Strip, the Hamas movement called for an emergency meeting to discuss the US position towards Jerusalem and for a "day of rage" on Wednesday. Hamas chief Ismail Haniya warned that a US decision would be a "dangerous escalation" that crosses "every red line."
"The American administration's recognition of occupied Jerusalem as the occupation's capital and moving its embassy to Jerusalem crosses every red line," the head of the Palestinian movement said in a letter to Arab and Muslim world leaders.
"Moving the American embassy to Jerusalem is a dangerous escalation and provides cover for the extremist government of Netanyahu to carry out its plan to Judaize the city of Jerusalem."
Hamas has previously warned of a third Palestinian intifada, or uprising, over such a move. It called on young people in the West Bank to rise up and "respond to the American decision that targets our Jerusalem in every possible way." 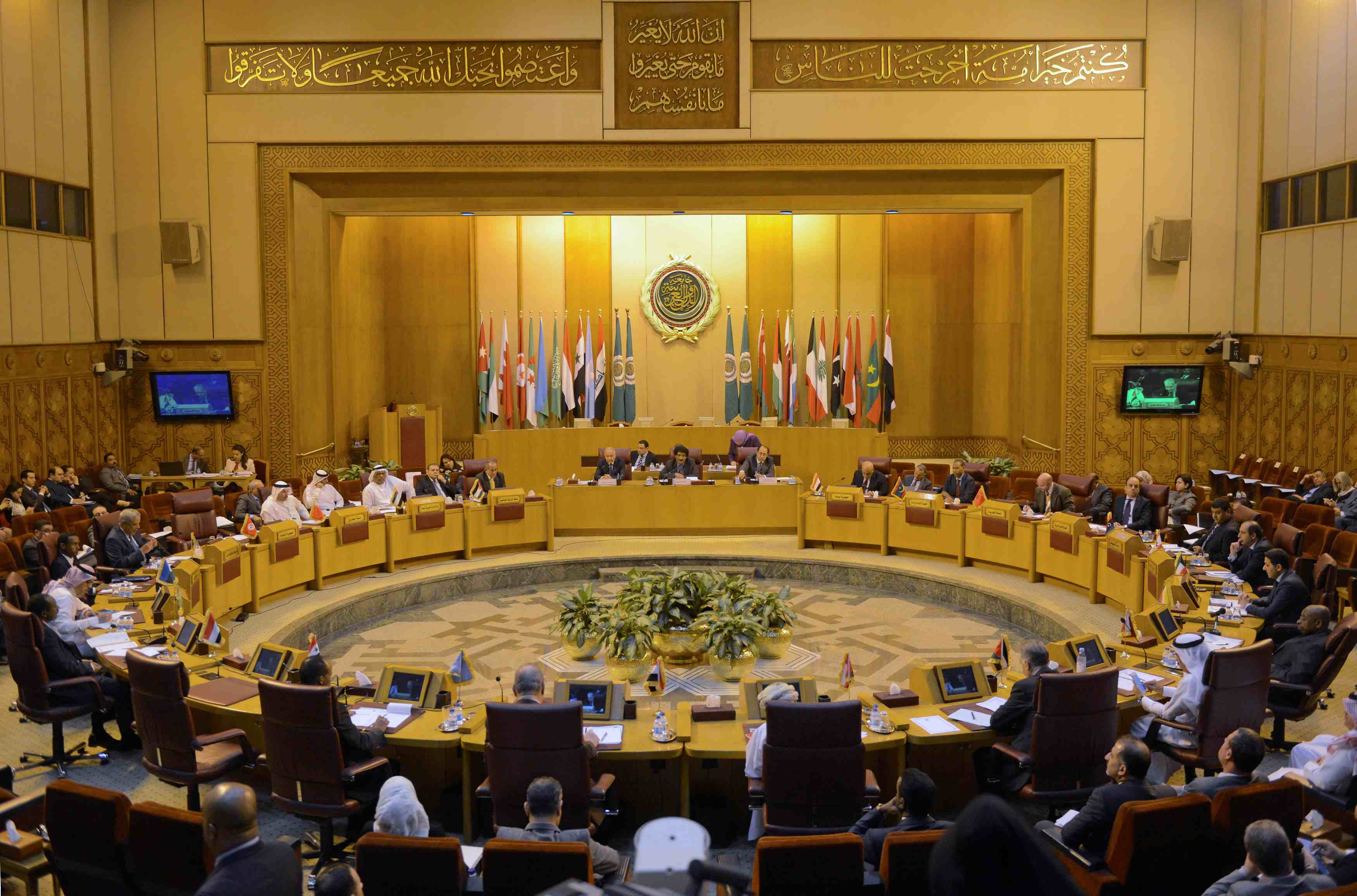 A general view of the Arab League delegates meeting to discuss the possible move of the US embassy to Jerusalem in Cairo, Dec. 5. /Reuters Photo

A general view of the Arab League delegates meeting to discuss the possible move of the US embassy to Jerusalem in Cairo, Dec. 5. /Reuters Photo

Arab leaders on Tuesday united in condemning the US proposal while warning Trump that the move could have dangerous consequences.
Saudi King Salman bin Abdulaziz Al Saud called Trump’s plan a dangerous step that would negatively affect and offend Muslims around the world, Al Arabiya reported citing an official statement from the Saudi palace. King Salman told Trump that any declaration on Jerusalem before a settlement of the issue would harm the ongoing Palestinian-Israeli peace negotiation, it said.
Jordan announced it would convene emergency meetings of the Arab League and the Organization of Islamic Cooperation (OIC) on Saturday and Sunday to deliberate strategy on how to face the "dangerous" consequences of Trump’s decision.
The kingdom is holding consultations with Arab League members in its capacity as president of the Arab summit and also with Turkey which holds the chairmanship of the OIC, Jordanian Foreign Minister Ayman al Safadi told Reuters.
"These meetings will coordinate Arab and Islamic stances towards the (Trump) decision. Jerusalem is a Palestinian, Jordanian, Islamic, and Christian issue and any attempts to decide its fate unilaterally are null and void," Safadi said.
The Arab League, meanwhile, warned the US not to take any measures that would change Jerusalem's current legal and political status. Arab League chief Ahmed Aboul-Gheit said in Cairo that the US decision would be a dangerous measure that would have "repercussions" across the entire Mideast region.
Turkish President Recep Tayyip Erdogan, in a televised speech on Tuesday, dubbed the status of Jerusalem as a "red line" for Muslims warning Trump that his plan could prompt Ankara to cut ties with Israel. "Mr Trump! Jerusalem is a red line for Muslims," Erdogan said. 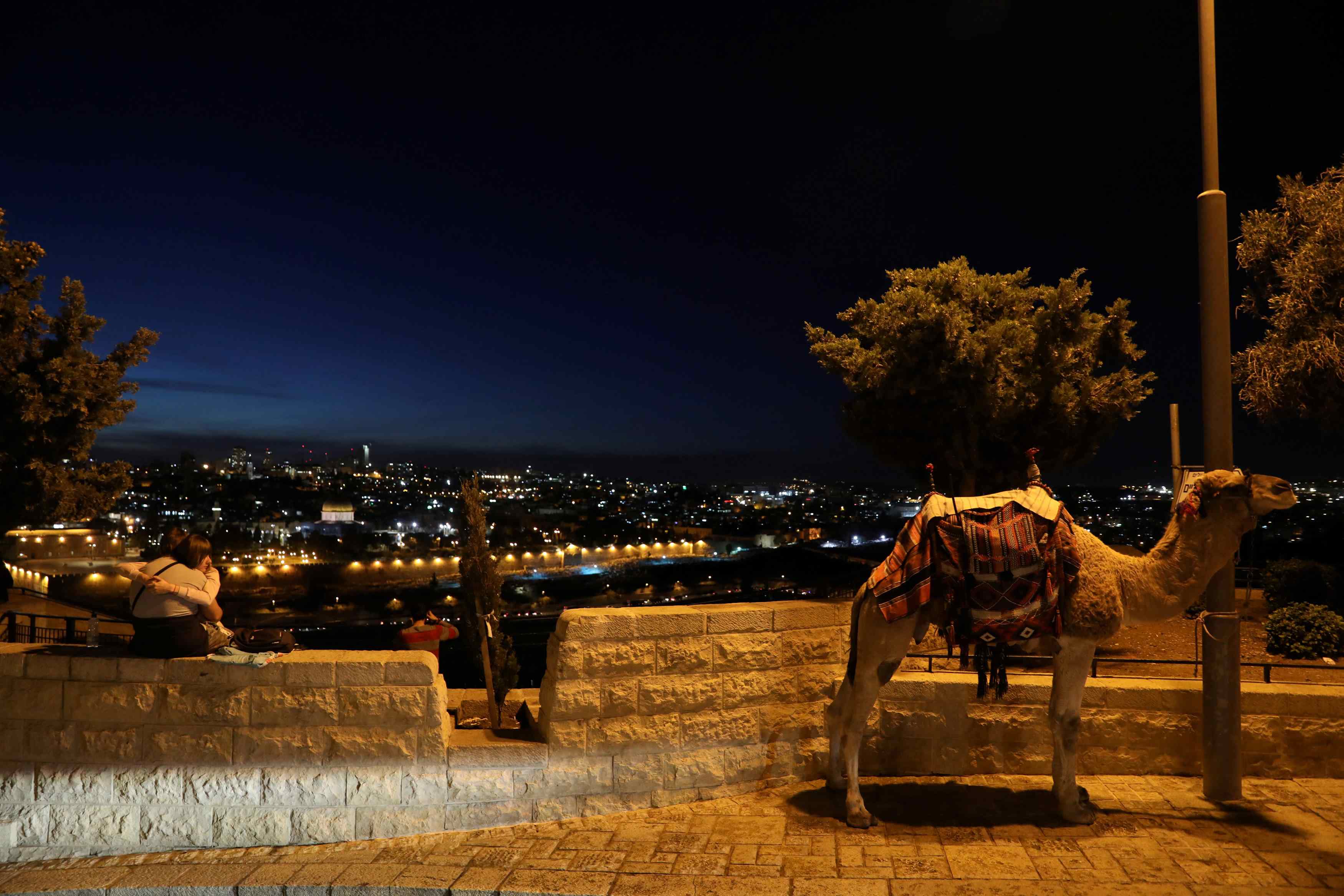 People sit together next to a camel at the look-out point of Mount Olives opposite to the Dome of the Rock and Jerusalem's Old City, Dec. 4. /Reuters Photo

People sit together next to a camel at the look-out point of Mount Olives opposite to the Dome of the Rock and Jerusalem's Old City, Dec. 4. /Reuters Photo

The Egyptian President Abdel Fattah al-Sisi cautioned Trump against “taking measures that would undermine the chances of peace in the Middle East,” according to a Cairo presidential statement.
"The Egyptian president affirmed the Egyptian position on preserving the legal status of Jerusalem within the framework of international references and relevant UN resolutions," the statement said, adding that Sisi told Trump there was no need to “complicate” matters in the Middle East.
Jordan and Egypt are the only Arab countries with full diplomatic relations with Israel while Turkey was the first Muslim nation to recognize the Jewish state.
Meanwhile, in an open letter to the US President, Morroco’s King Mohammed VI expressed his "deep personal concern" and "the great concern felt by Arab and Muslim states and peoples" over moves to recognize Jerusalem as Israel's capital.
The monarch, who is also the head of OIC's Al-Quds Committee, which lobbies on issues related to Jerusalem – holy to three of the world's major religions – also urged Trump to avoid anything that could "exacerbate feelings of frustration and disappointment, which are the basis of extremism and terrorism."
Iraq warned Trump’s decision will lead to instability in the region and the world. "The council of ministers rejects this [US] step and expresses its utmost concern regarding this step as well as the moving of the American embassy to Al Quds (Jerusalem). The Iraqi government warns of the consequences of this decision on the stability of the area and the world,” Iraqi Prime Minister Haider al-Abadi said.
“Al Quds is a landmark for the coexistence of all religions and ethnic groups and no one party can take a unilateral decision on this issue,” Abadi added.

Status of Jerusalem, a thorny issue 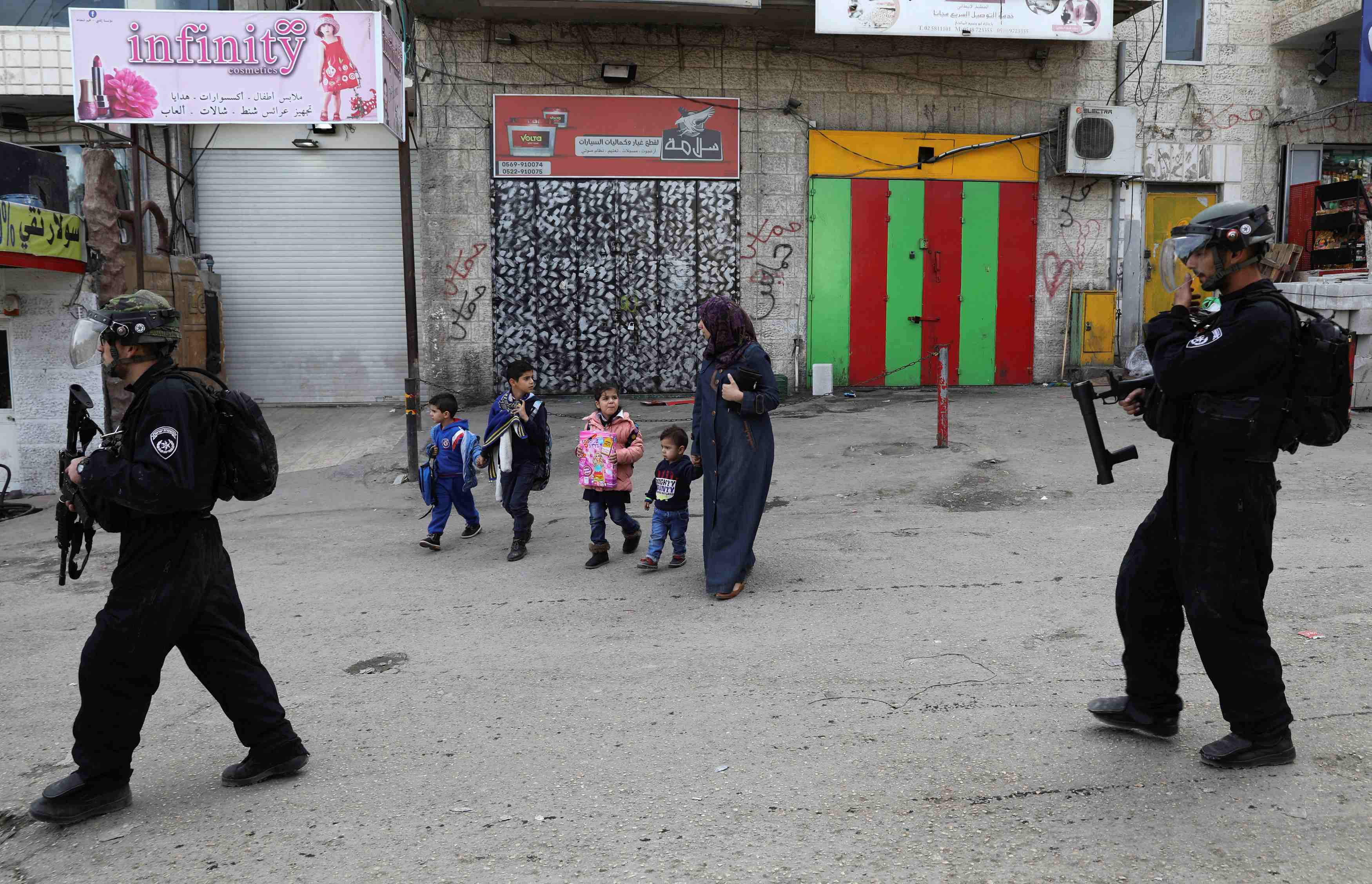 Israeli policemen patrol a street in the East Jerusalem refugee camp of Shuafat where a building was demolished, December 5, 2017. /Reuters Photo

Israeli policemen patrol a street in the East Jerusalem refugee camp of Shuafat where a building was demolished, December 5, 2017. /Reuters Photo

The status of Jerusalem remains one of the thorniest between Israel and the Palestinians. Israel views the city as its undivided capital, whereas the Palestinian government sees the eastern part as the capital of a future state and Hamas, which controls Gaza and does not recognize Israel, calls Jerusalem the Palestinian capital.
Israel seized control of East Jerusalem in 1967 and later annexed it, in moves that were never recognized by the international community. The United Nations and European Union have warned against the unilateral US decision on Jerusalem.
"As a matter of principle, the [UN] Secretary-General [Antonio Guterres] has said he has consistently warned against any unilateral action that would have the potential to undermine the two-state solution," UN spokesman Stephane Dujarric told a press briefing at UN Headquarters in New York on Tuesday.
"We've always regarded Jerusalem as a final-status issue that must be resolved through direct negotiations between the two parties [of Israelis and Palestinians] based on relevant Security Council resolutions," said Dujarric.
EU foreign relations chief Federica Mogherini, speaking after talks in Brussels with US Secretary of State Rex Tillerson, said on Tuesday that the status of Jerusalem must be resolved "through negotiations."
"A way must be found through negotiations to resolve the status of Jerusalem as the future capital of both states, so that the aspiration of both parties can be fulfilled," Mogherini said
"The European Union supports the resumption of a meaningful peace process towards a two state solution. "We believe that any action that would undermine this effort must absolutely be avoided."
Jerusalem is broadly viewed as a matter to be settled in the final negotiations between the two sides. The UN statements in the past have also hinted that the city could remain the joint capital of both Israel and a future Palestinian state in a compromise deal.
The vast majority of countries have largely remained neutral on the subject. As of now, all embassies are based in Tel Aviv. 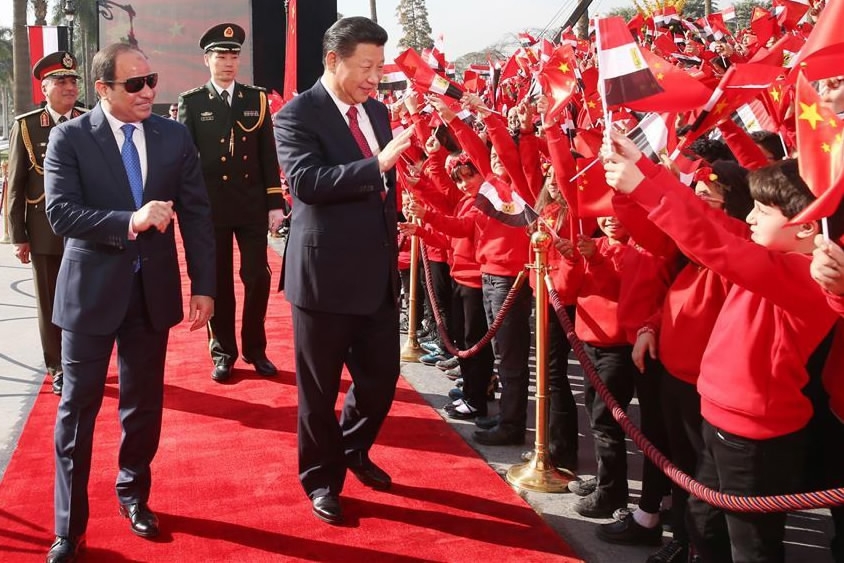 While China is yet to react to recent developments, President Xi Jinping, during his visit to the region last year, called for the establishment of a Palestinian state within the pre-1967-war borders amid efforts by Beijing to assert its economic and political clout in the Middle East.
Addressing the Cairo-based Arab League, Xi said the Palestinian problem "should not be marginalized."
"China supports the peaceful process in the Middle East [and] the establishment of a Palestinian state with its capital being eastern Jerusalem," he added.
(With input from agencies)
7128km