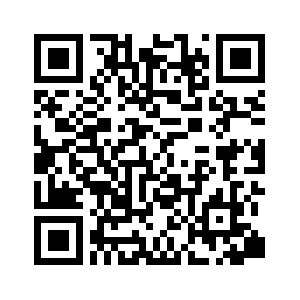 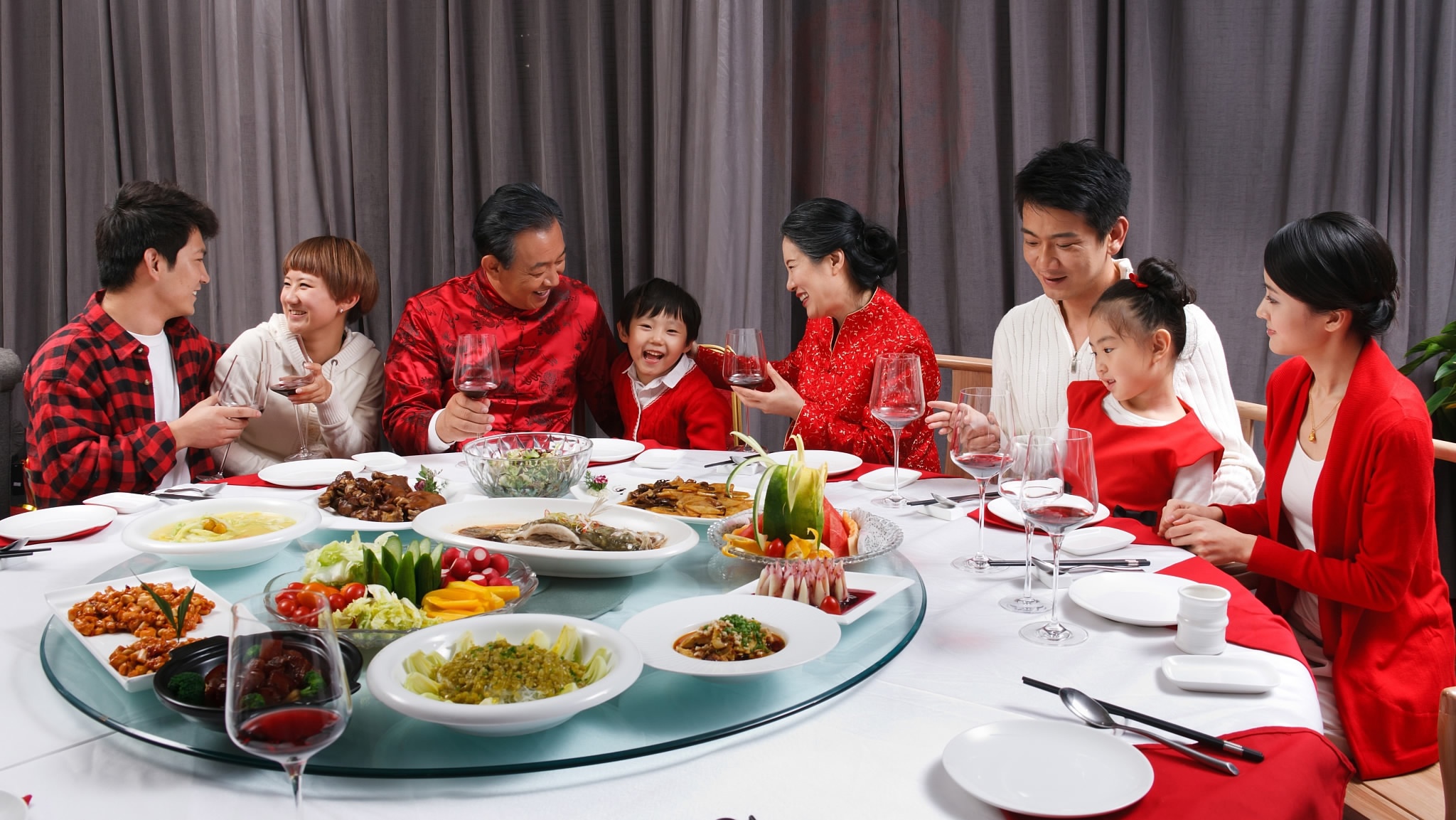 Spring Festival is a time for family gatherings and fancy feasts in China. Reunions around the dining table – a traditional way to mark the Chinese New Year – are feeding the growth of the country’s catering sector, but not without bitter consequences. Over-ordering remains a downside of the festive frenzy despite campaigns calling for frugality, resulting in unfinished plates and good food chucked right into the trash bin.
Chinese people have already switched to holiday mode, with hundreds of millions either already back home or readying their suitcases for the journey to visit families. The Chinese New Year is arguably the most important cultural festival on the Chinese calendar, and an occasion to splurge and indulge.
Starting next week, belts will be loosened, plates filled and refilled, glasses clinked as Chinese people fete the Spring Festival feasting and fraternizing. Food is the centerpiece of holiday celebrations, thanks to long-held cultural beliefs that confer "power" to certain items and require their consumption on the eve of the Lunar New Year and the following days. 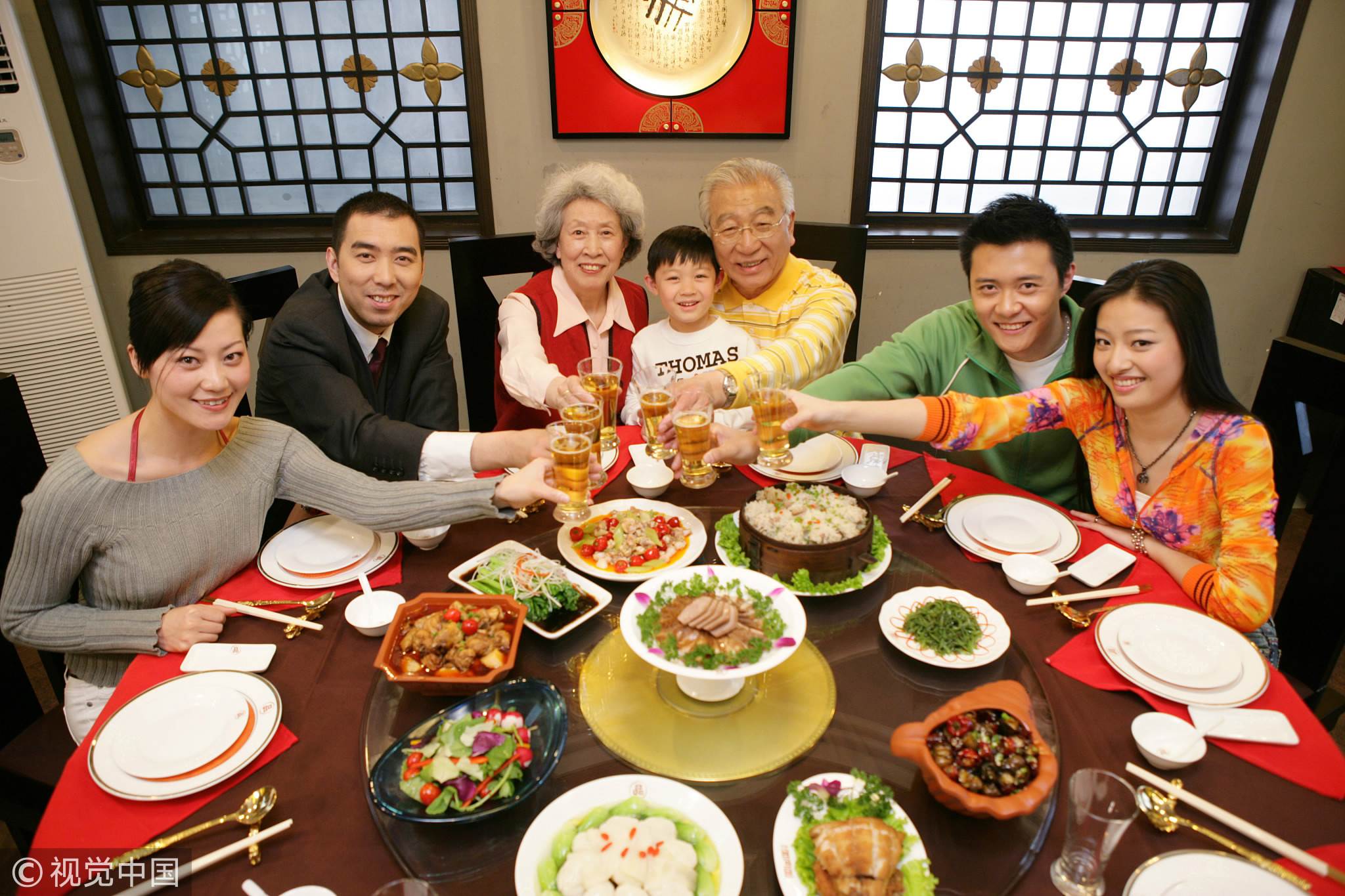 More and more Chinese are opting for restaurants as venues to reunite with friends and family. /VCG Photo

More and more Chinese are opting for restaurants as venues to reunite with friends and family. /VCG Photo

Out of the kitchen, straight to the private rooms
With a growing appetite for new experiences – and pockets deep enough to foot the bill – Chinese people are turning to restaurants as venues to re-connect with their friends and family, giving a boost to the catering industry.
Retail and catering enterprises are expected to rake in 900 billion yuan (about 143 billion US dollars) in the week-long holiday starting February 15, a 10-percent increase from the same period last year, said Wang Bingnan, Chinese vice minister of commerce, on Tuesday.
How and where to spend Chuxi, or the Chinese New Year’s Eve, are being planned weeks in advance; and whether it’s dining outside or ordering in, one thing seems certain: families are gradually steering clear from the kitchen, spending less time slicing and dicing, and more efforts mixing and mingling.
More than 90 percent of the set menus at restaurants to celebrate the Chinese New Year’s Eve have been pre-booked, according to Xinhua News Agency. Meanwhile, eateries have been promoting their delivery services and festive meals for the special occasion on food ordering platforms online.
Frugality off menu? 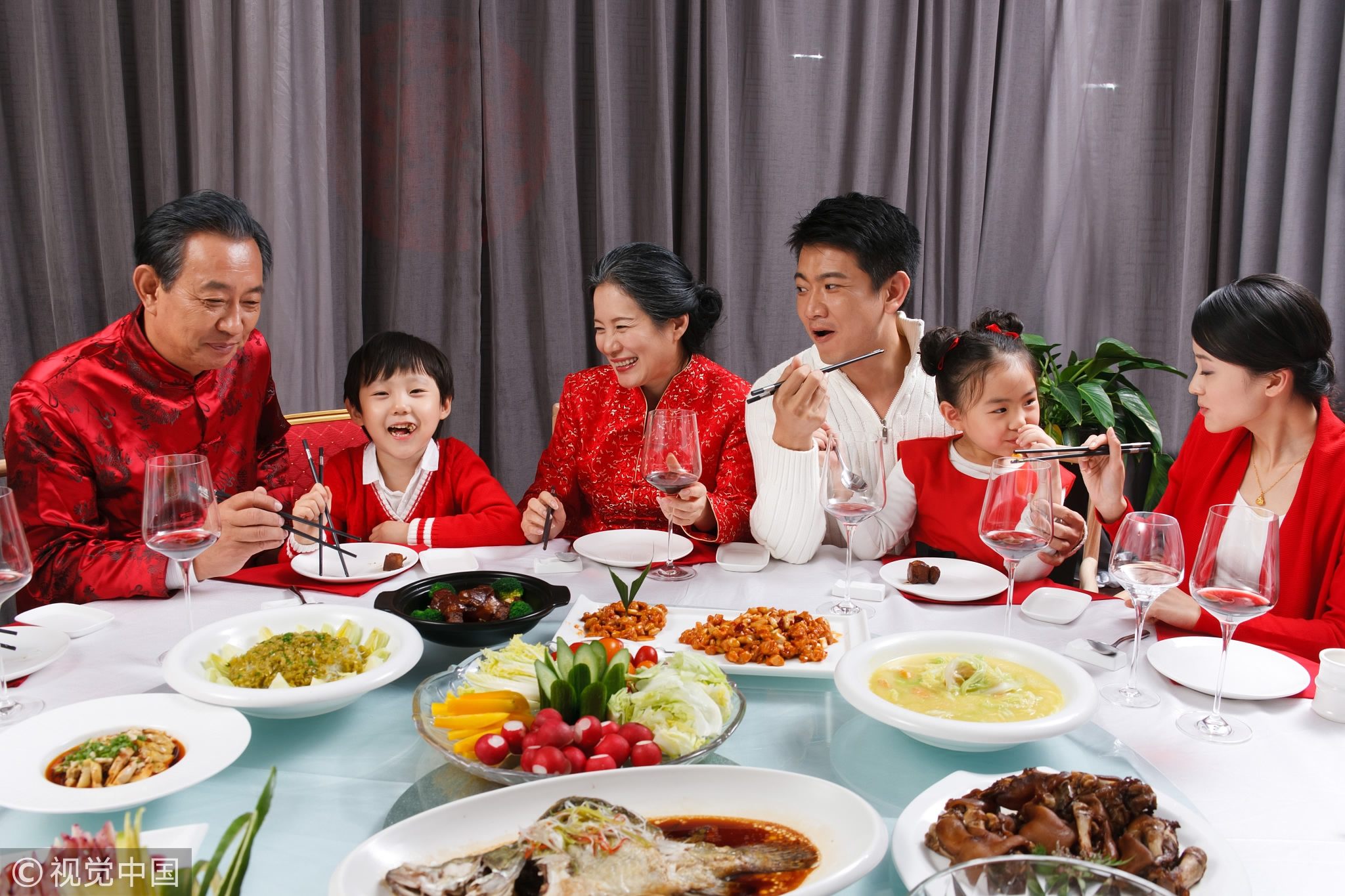 But the celebration during the new Lunar New Year comes with high spirits and even higher mountains of wasted food – a chronic problem in the increasingly wealthy country that seems to be exacerbated during the festive season, in part because of cultural habits.
Seventeen to 18 million tonnes of food were tossed away in China on an annual basis between 2013 and 2015, according to a 2016 study by the Chinese Academy of Sciences. The mammoth amount of discarded food could have served between 30 and 50 million people for a whole year.
Much of the wastage takes place in restaurants – and traditional festivals worsen the situation.
Superstitious spendthrifts
Ordering more than diners can chew during this time of the year is rooted in the common belief that eating certain food items could attract happiness, longevity and success among other sought-after goals in the year to come. 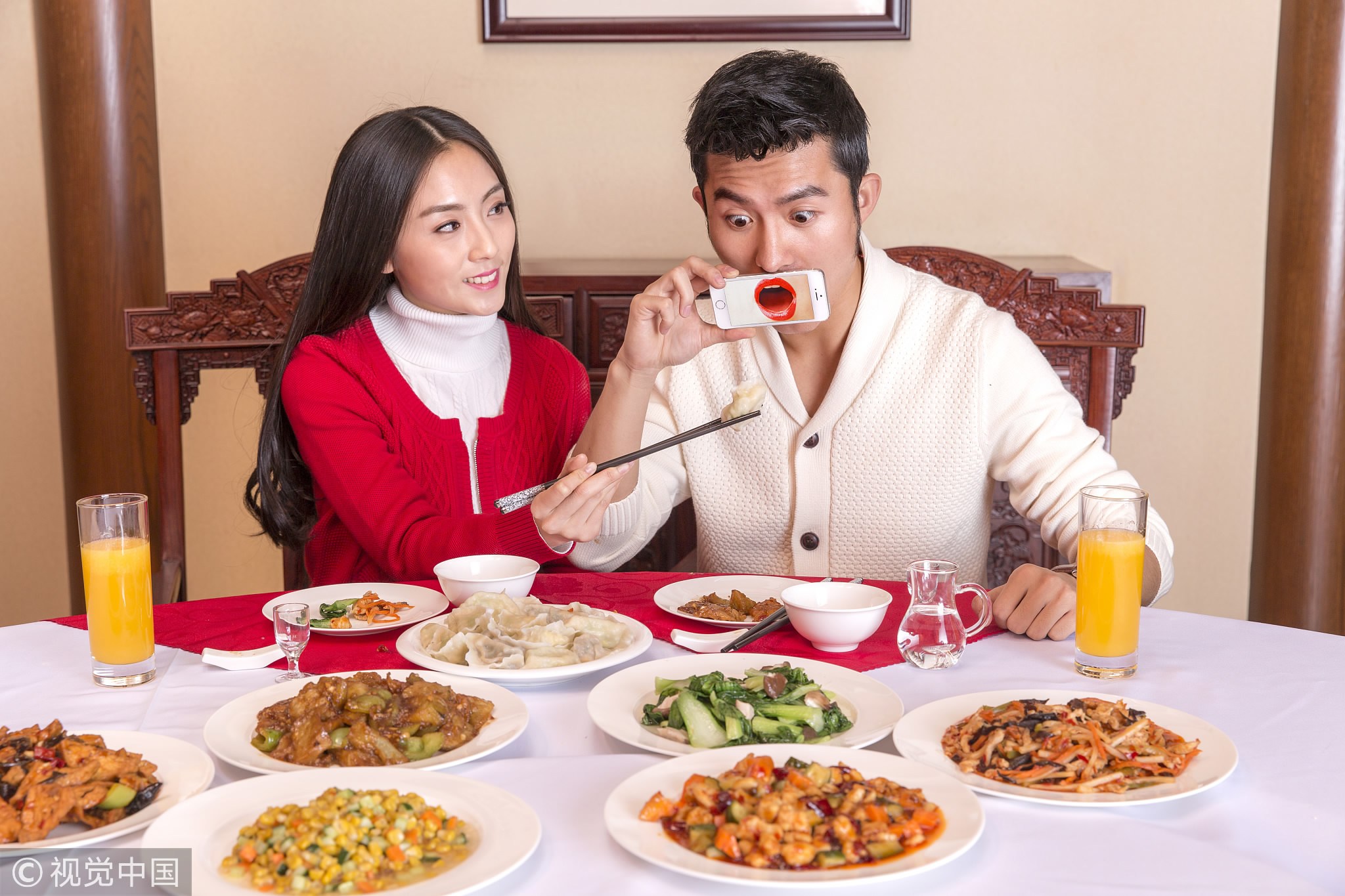 Too much food and enough stomach space. /VCG Photo

Too much food and enough stomach space. /VCG Photo

Dumplings and spring rolls are a sign of wealth, fish represents prosperity, a whole chicken symbolizes family unity, noodles represent long life and nian gao (年糕) – a type of glutinous rice – is believed to help businesses flourish, students get better grades, children grow taller and workers receive promotions as the Chinese characters糕 and 高 (tall or high) are homophones.
The similarity of the sounds of fish (鱼) and surplus (余) in Chinese also leads people not to finish their fish dishes, guided by the belief that leftovers will pave the way for abundance and riches in the following year.
Another factor behind food loss during festive banquets is the desire to "save face" or avoid being disgraced. Food in China is more than just a means of subsistence – it’s a symbol of status. The need for hosts of dinner parties to show hospitality and generosity translates to picking more dishes than guests can ever take in.
A weighty issue
In fact, managing to "save face" is no light issue, costing 20 grams of food wasted per person per meal on average, according to the study by the Chinese Academy of Sciences.
The research was carried out by a 140-strong team who monitored and weighed food wastage in 366 restaurants in four Chinese cities, namely Beijing, Shanghai, Chengdu in the southwestern Chinese Province of Sichuan, and Lhasa, the capital of the Tibet Autonomous Region. 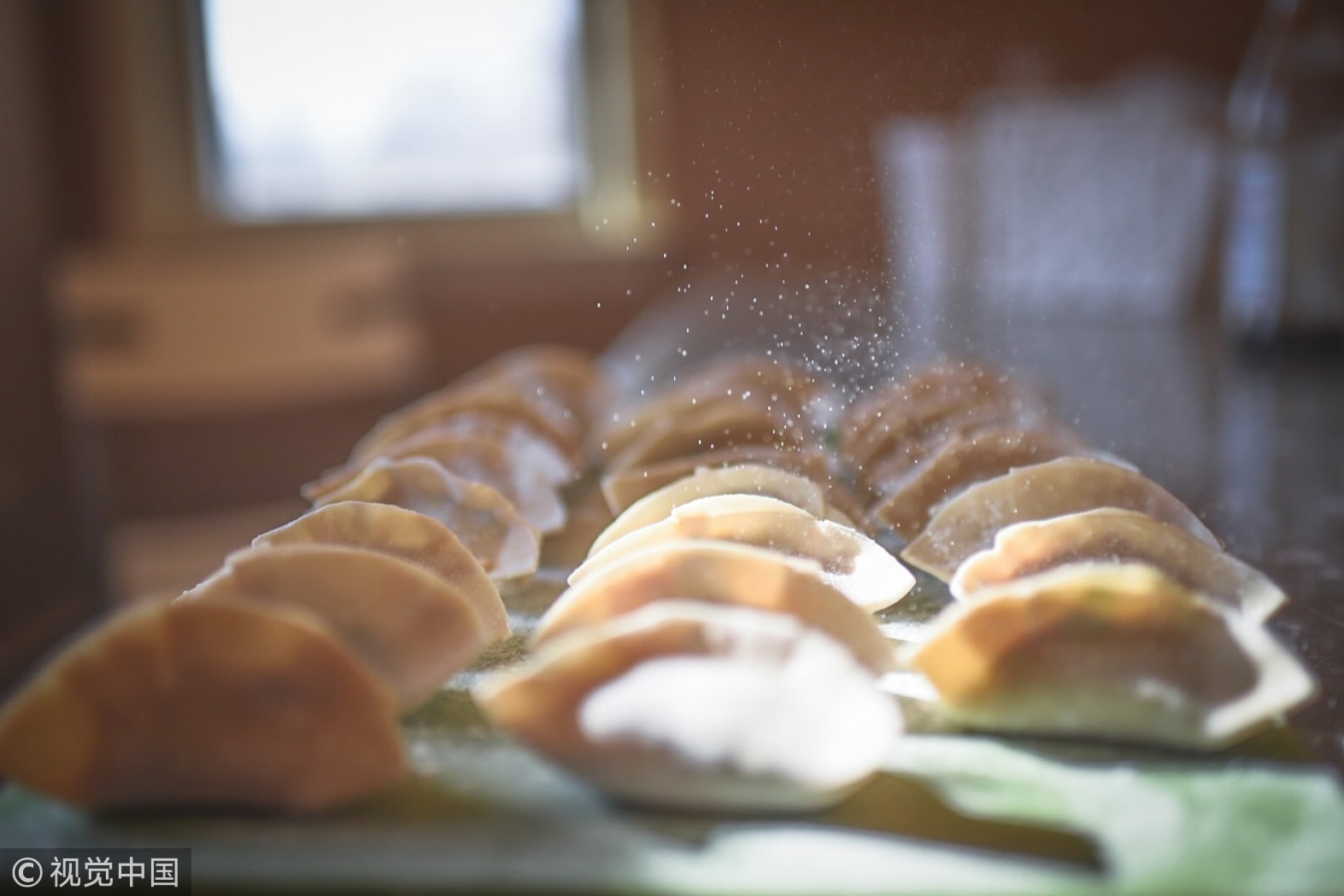 Dumplings get their significance from their shape. They look like old currency and hence eating them is believed to bring wealth in the New Year. /VCG Photo

Dumplings get their significance from their shape. They look like old currency and hence eating them is believed to bring wealth in the New Year. /VCG Photo

Researchers found that wasteful behavior in restaurants is prevalent, with 79.2 grams of edible food squandered on average per diner in Beijing. The figure climbs to 94.9 grams per person per meal in Shanghai, and up to 130.19 grams per diner in large restaurants.
"The more high-priced or luxurious the restaurant, the more waste there is," Liu Yao, a researcher with the Institute of Geographic Sciences and Natural Resources Research at the Chinese Academy of Sciences, told China Daily back in 2016.
More than just an unfinished dish
In a country with shrinking arable land and dwindling potable water supplies like China, binning food is a waste of much-needed natural resources and a reality that authorities find hard to digest.
In 2013, China introduced an anti-food-waste campaign, fittingly called "Clean Your Plate", during which government officials encouraged people to order their need of food and bag leftovers home, and restaurants to downsize their portions and stop charging minimum fees. 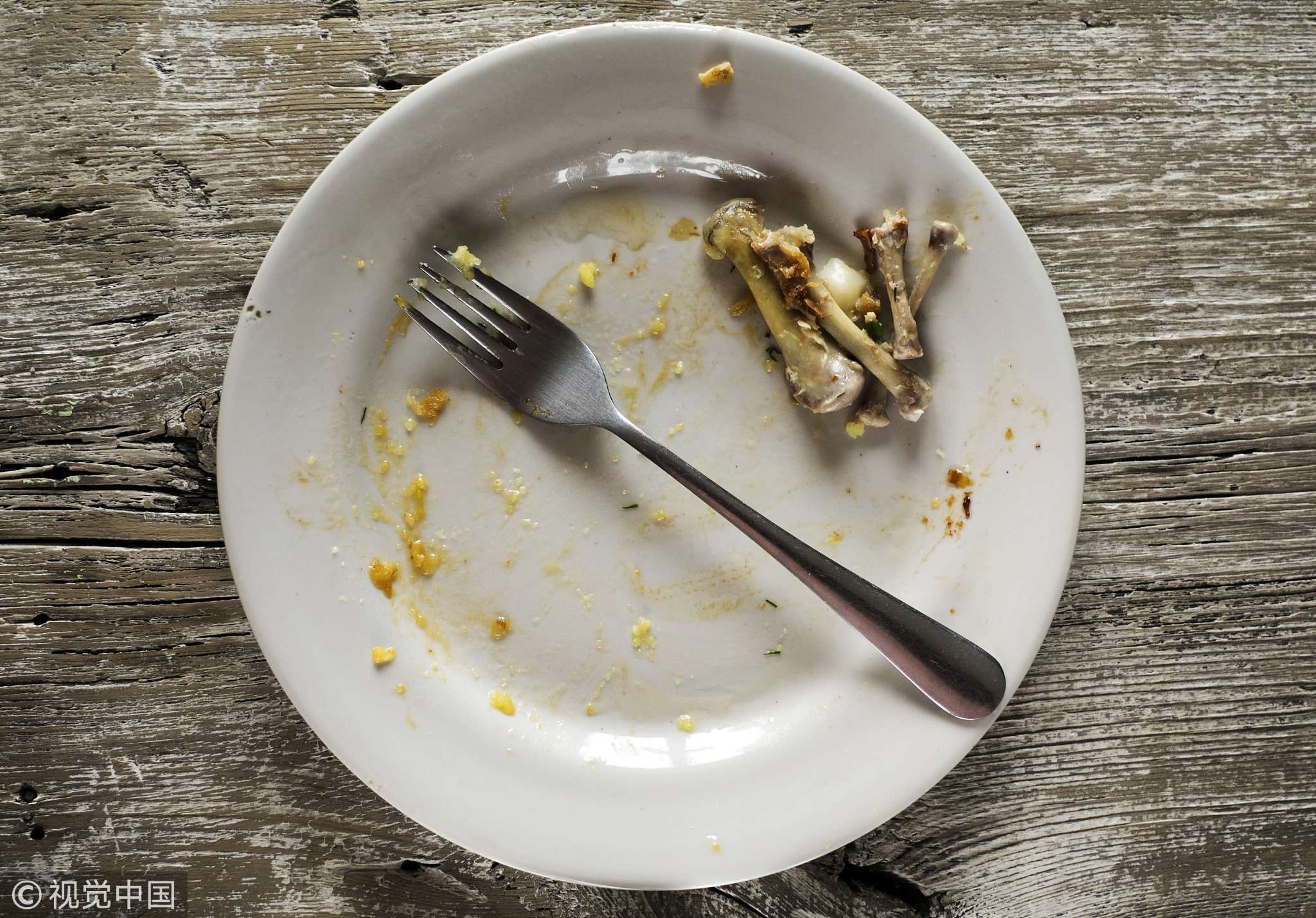 "Clean Your Plate" is a campaign the Chinese government launched in 2013 against food waste. /VCG Photo

"Clean Your Plate" is a campaign the Chinese government launched in 2013 against food waste. /VCG Photo

The initiative bore fruit, with the catering sector’s revenue growing by nine percent to 389 billion US dollars the same year – the slowest in over 20 years. But the movement seems to have fizzled out in the following years, with the industry growing 152 percent in the four-year period ending 2017 to reach about 603.6 billion US dollars, prompting calls for renewed efforts by officials.
"Governments at various levels should strengthen people's awareness that frugality is a virtue and waste is shameful," read a commentary published by China Daily last May.
China is far from being alone in dumping good food during the festive season.
Americans wasted about 204 million pounds of turkey during Thanksgiving in 2016, according to the environmental advocacy group, the Natural Resources Defense Council, costing the country around 293 million US dollars.
Consumer goods company Unilever estimates that over four million Christmas dinners are tossed in the trash every year in the UK – that's around 263,000 turkeys, 7.5 million mince pies, 740,000 pudding portions, 17.2 million Brussels sprouts, 11.9 million carrots and 11.3 million roast potatoes.