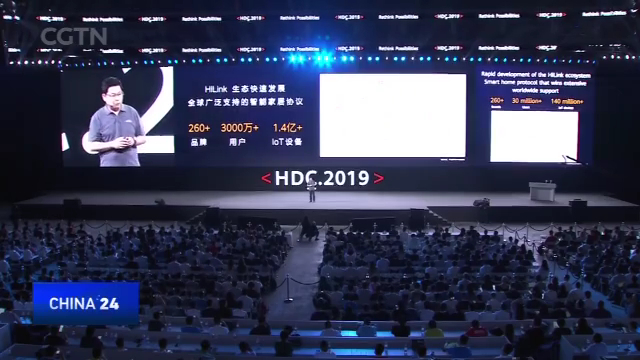 It was a historic moment for Chinese tech-giant Huawei this weekend, as the company unveiled its very own operating system geared for all smart devices. The company's consumer business group CEO Richard Yu delivered the announcement in Dongguan, at this year's Huawei Developer Conference. CGTN's Omar Khan brings us the highlights from south China.
Apple's iOS and Google's Android, they've long dominated the smartphone operating system landscape. But now enter HarmonyOS, Huawei's very own platform, designed for developers around the world.
RICHARD YU CEO, HUAWEI CONSUMER BUSINESS GROUP "And you know at the same time we also support the ecosystem, that app developers develop all the apps on the existing Android, on the existing Linux, they can also rely on Huawei, on Huawei's HarmonyOS."
Perhaps what makes Harmony stand out is the fact that it will be open-source, aimed at attracting developers. Huawei says the operating system will allow for the seamless transition of apps across various devices.
RICHARD YU CEO, HUAWEI CONSUMER BUSINESS GROUP "Why we made it open source? Because we want to be a global standard. Not just a Huawei HarmonyOS, but a worldwide, global HarmonyOS. It's for everyone."
As for the first device to use the newly unveiled OS, a smart TV developed by Huawei's brand HONOR.
According to company president George Zhao, the HONOR Vision Smart TV is expected to revolutionize not only our viewing experience, but how our devices will be integrated into one hub.
At the Huawei Developer Conference, attendees had a first look. Zhao showed off its various functions, including video calls, and a seamless transition when it came to mirroring one's smartphone.
Going forward, the next-generation operating system is set to co-exist with other platforms. However, Huawei is confident that their creation is one of a kind.
RICHARD YU CEO, HUAWEI CONSUMER BUSINESS GROUP "Firstly, this view is correct, it will co-exist with others. And secondly, I believe this has a chance to be the leading OS for the industry, and for the future. Because this is really a leading technology for the future."
Omar Khan, CGTN, Dongguan, Guangdong, Province.
SITEMAP
EXPLORE MORE
DOWNLOAD OUR APP