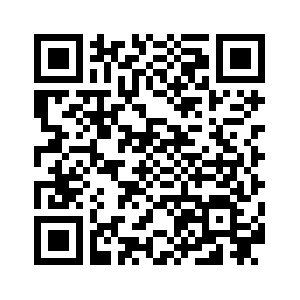 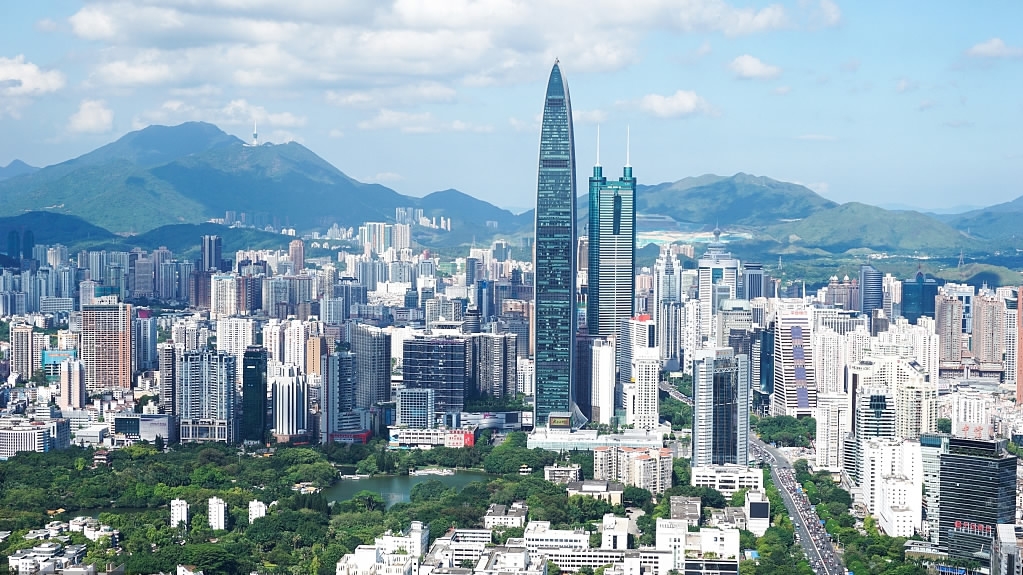 China’s surge towards being the global leader in building smart cities has found a new admirer.
Rahul Gandhi, the newly-appointed leader of India’s main opposition Congress party, cited the example of China’s Shenzhen as an urban transformation success story, which India can take lessons from.
His remarks came as he criticized Prime Minister Narendra Modi’s ambitious Smart City Mission to develop 100 cities in the country, as “empty slogans” in the absence of concrete results on the ground. 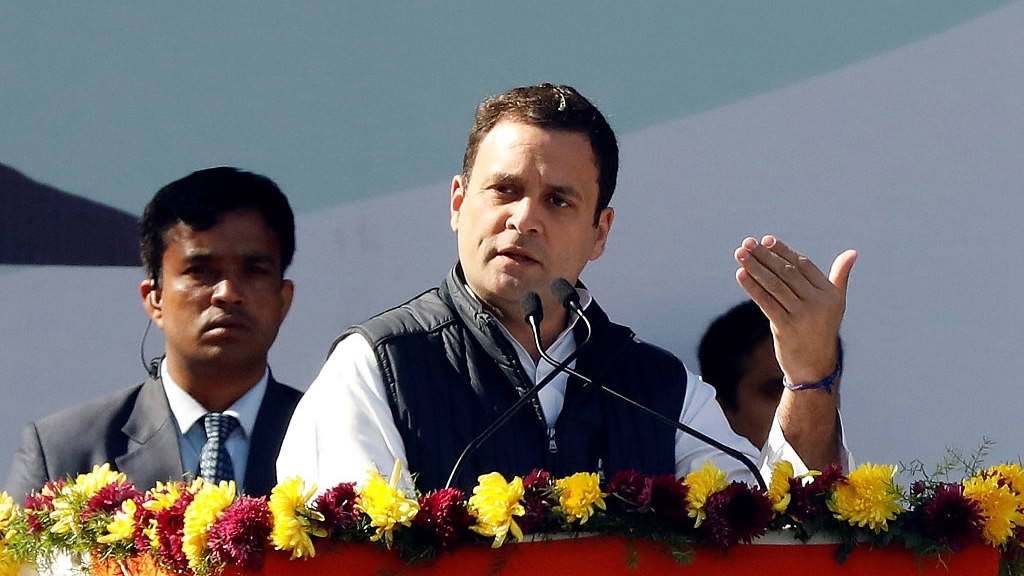 Rahul Gandhi addresses a gathering after being appointed as the the president of Indian National Congress at the party headquarters in New Delhi, India, December 16, 2017. /VCG Photo

Rahul Gandhi addresses a gathering after being appointed as the the president of Indian National Congress at the party headquarters in New Delhi, India, December 16, 2017. /VCG Photo

In a Sunday tweet, Gandhi derided the Indian prime minister for his failure to give adequate push to smart city projects in India, and posted a link to the 2016 documentary "Shenzhen: The Silicon Valley of Hardware" that explores the rapid transformation of the Guangdong Province city from a fishing community to megacity.
The Congress leader’s tweet, his last of 2017, was addressed to Modi’s ardent followers, who are referred to as bhakts (devotees in Hindi).
“Dear Modi bhakts, Out of 9,860 crores (98.6 billion rupees or 1.55 billion US dollars) for the Smart Cities only 7% has been used. China is out competing us while your master gives us empty slogans. Please watch this video and advise him to focus on what matters – job creation for India,” he tweeted referring to the documentary. 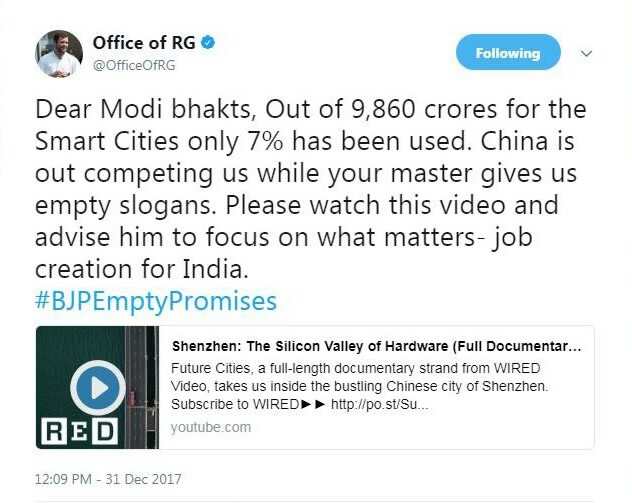 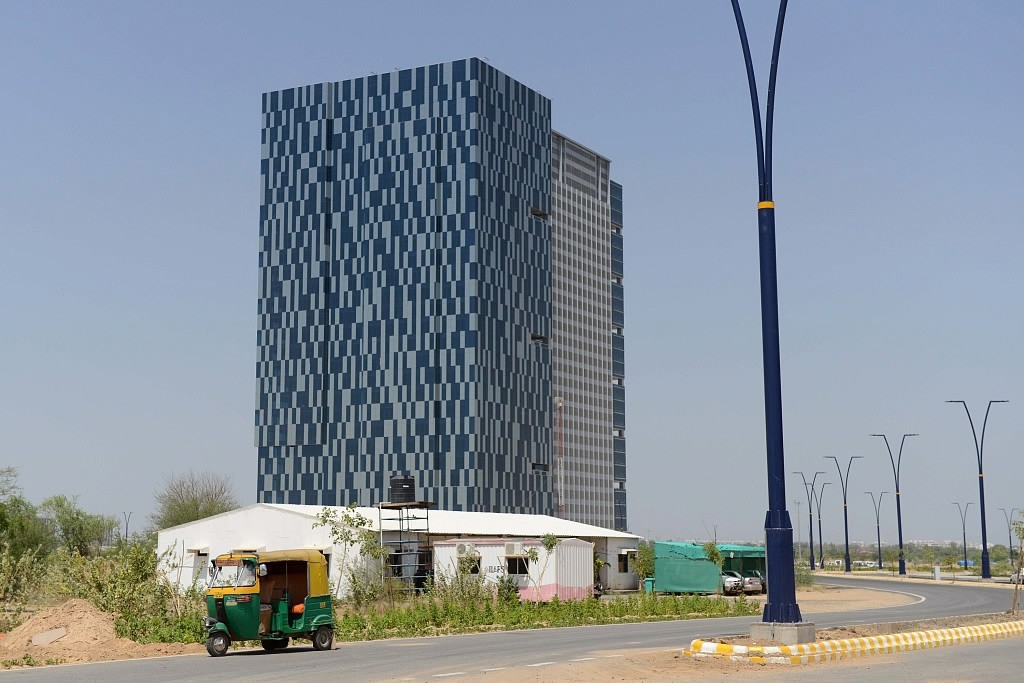 At a review meeting of the project ahead of the release of the Urban Affairs Ministry report, a ministry official had expressed concern about the "unsatisfactory" progress of the project in some of the cities, according to news agency Press Trust of India. The official said the ministry would approach the cities that are lagging behind to find the "bottlenecks" with an aim for the speedy implementation of projects.
Earlier in December, India’s Urban Affairs Minister Hardeep Singh Puri attempted to alleviate any misgivings saying the impact of smart city projects would be visible by mid next year. To incentivize efficiency in implementation of projects, the government will present Smart City awards in June 2018 to cities that are performing well.
Reviewing the progress of the Smart City Mission on August 30, Prime Minister Narendra Modi said that the challenge before everyone was to ensure implementation and the expeditious completion of the work in the 90 identified cities.

Amid concerns over the utilization of funds by the chosen cities under India’s Smart City Mission, opposition leader Gandhi was quick to cite the contrast with China which has seen a phenomenal transformation in urban development in recent years.
More than 500 Chinese cities started their smart-city transformations in 2017, China Daily reported last year. Before March 2017, a total of 290 cities had initiated smart-city pilot projects, and more than 300 cities had signed smart-city construction agreements with IT companies, including the three major Chinese telecommunications companies, Ant Financial and Tencent. 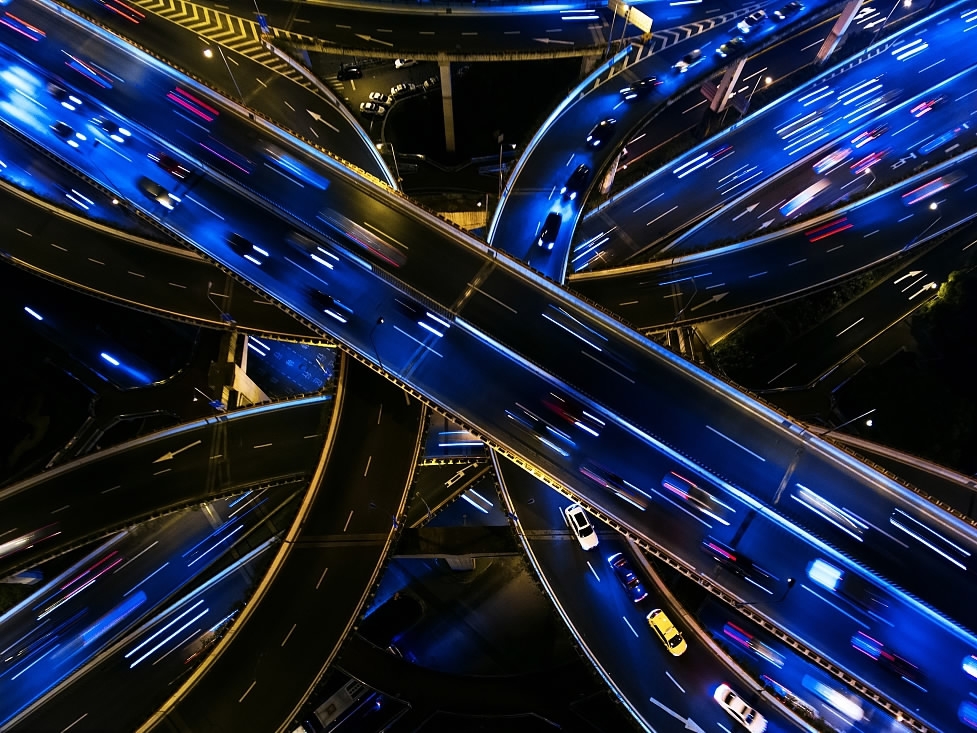 Over 500 cities in China, including 95 percent of provincial capitals and 83 percent of prefecture-level cities, have proposed transitioning into smart cities. /VCG Photo

Over 500 cities in China, including 95 percent of provincial capitals and 83 percent of prefecture-level cities, have proposed transitioning into smart cities. /VCG Photo

“By the end of March 2017, more than 500 cities, including 95 percent of provincial capitals and 83 percent of prefecture-level cities, had proposed transitioning into smart cities. As construction of smart cities accelerates, the scale of related markets is expected to hit 100 billion yuan (15.4 billion US dollars). This figure shoots up to one trillion (153.7 billion) when upstream and downstream industries are included,” China Daily reported.
Also in December, China’s Tungshu group signed a Memorandum of Understanding with leading companies from Japan, Thailand, Mongolia, Malaysia and Indonesia for joint development of smart cities and urban technology.
“In China, smart city has been viewed as a key strategy to promote industrialization, informatization, and urbanization. The rapid development of smart cities in China is largely attributed to the cooperation between IT companies and the government,” according to a study by the Netherlands-based Utrecht University.

What India could learn from China's smart cities

American economist Paul Romer famously said that if Shenzhen were a city-state, it’s economic growth rate would have been far greater than any country in history. Once a tiny fishing village with a population of 30,000, the city has transformed into a megapolis of 15 million people.
The modern cityscape is the result of its vibrant economy made possible by rapid foreign investment since the institution of the policy of "reform and opening" over the last 37 years. Designated as China’s first Special Economic Zone (SEZ) in 1980, Shenzhen has successfully transformed itself into a hub of electronics manufacturing, in the process creating jobs for millions. 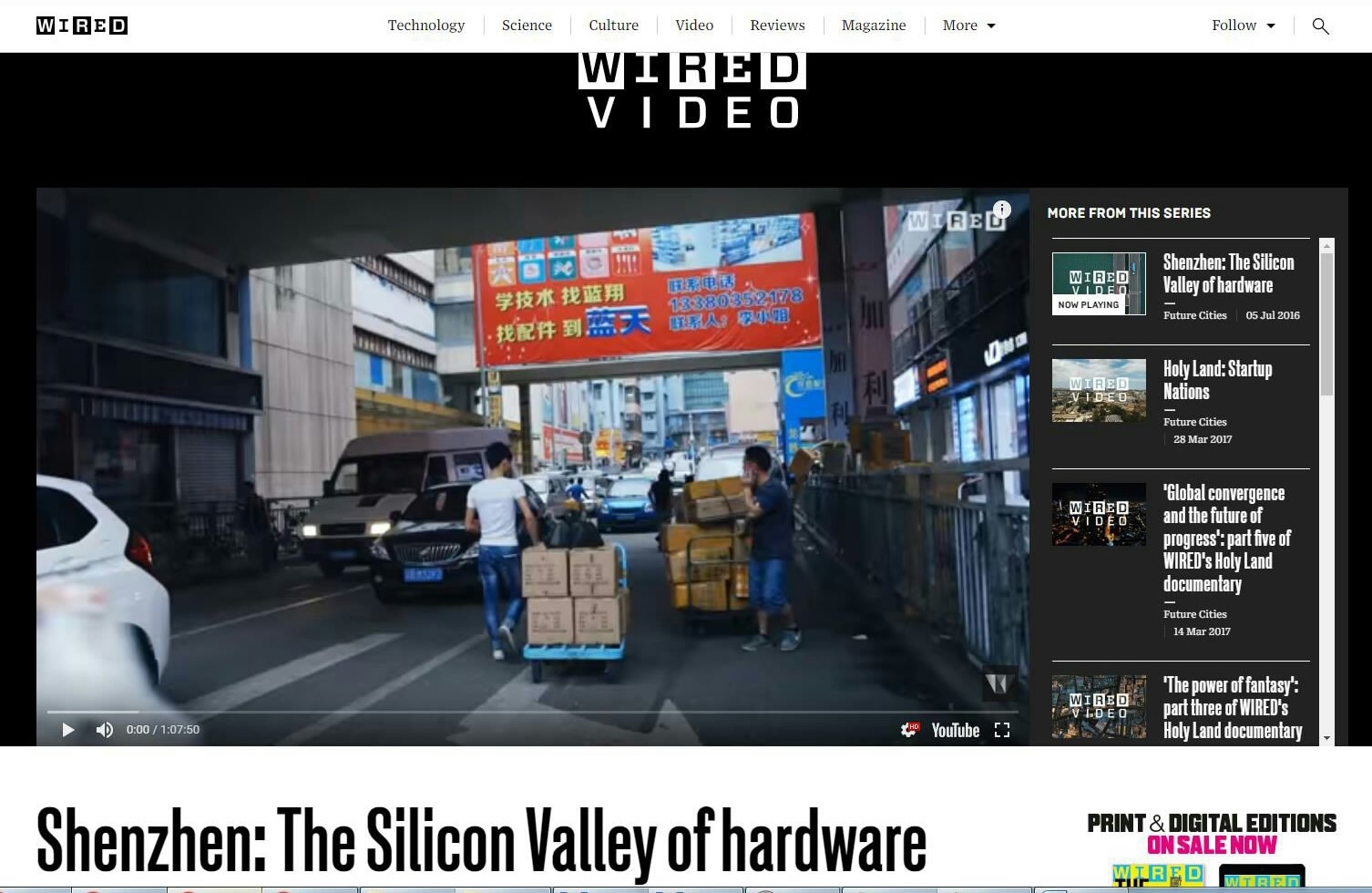 A screenshot of the webpage for the documentary "Shenzhen: The Silicon Valley of hardware" by UK-based Wired magazine.

A screenshot of the webpage for the documentary "Shenzhen: The Silicon Valley of hardware" by UK-based Wired magazine.

Job creation for India’s large unemployment population was one of the key demands that Gandhi urged Modi and his followers to focus on in his Sunday tweet. The lack of employment was one of the Congress party's main focuses while attacking the Gujarat government, run by Modi’s Bharatiya Janata Party, during the recently held state elections.
A crucial element in designing smart cities is to ensure that they are economically, environmentally and socially sustainable and that they permit social equity for their residents. Warning about the dangers of ignoring socioeconomic aspirations of those being displaced due to the creation of new smart cities, author Samir Nazareth, in a piece for the Washington-based The Diplomat magazine, advocated that Modi could learn from the resettlement policies of China.
“Displaced persons could stall the project if they are provided with insufficient compensation in terms of cash, training in new skills needed in the new economy, and new opportunities. After all, they will be living in these smart cities too. The Smart Cities project will not be able to meet its goals if those who have lost their land are not provided, as part of the resettlement package, with the economic skills they need to thrive in these areas,” stated Nazareth. 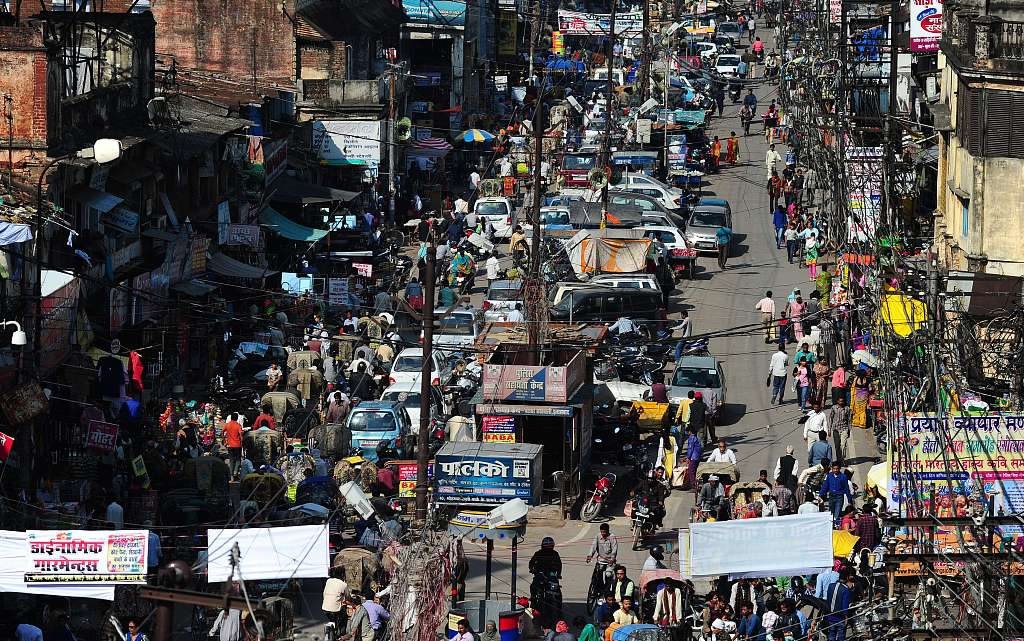 “Modi would do well to study the resettlement policies of China… China’s developmental resettlement policy integrates resettlement plans with regional socioeconomic development,” Nazareth said, adding: “China also has a very large resettlement bureaucracy that extends down to the village level. Thus there is a decentralization of authority. This can ensure that the lessons and skills acquired from projects are shared within the bureaucracy.”
In Shenzhen’s early days as a SEZ, the city was responsible for its own expenditure. This led to farsightedness in spending. Shenzhen also had greater autonomy in its administration. The level of autonomy in Shenzhen is viewed to be among the highest compared to other Asian SEZs. Shenzhen is also ranked as the most sustainable city in China.
Experts are of the view that if some of the future Indian smart cities were to adapt the Shenzhen model of development, they may witness similar growth and play a key role in the country’s economic progress.
Rahul Gandhi seems to have a valid point when he cited the Shenzhen example for Indian smart cities.
[Top photo: A skyline of Shenzhen City in southern China’s Guangdong Province. /VCG Photo]