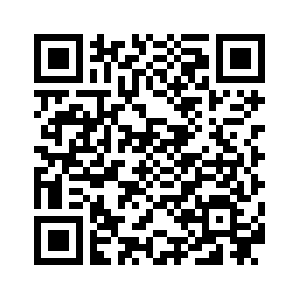 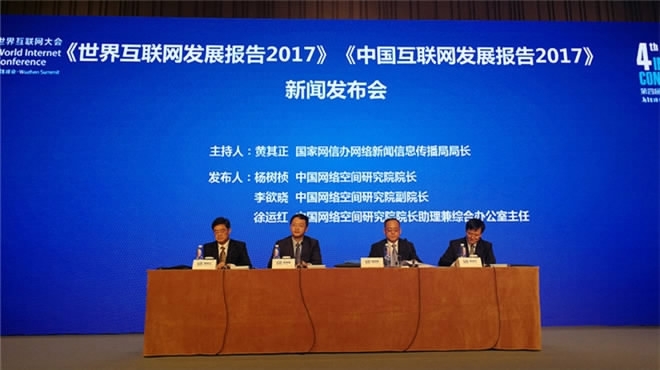 ‍
Two documents covering Internet trends in China and the world – the China Internet Development Report 2017 and World Internet Development Report 2017 – were released Monday morning during a press conference at the fourth World Internet Conference (WIC), currently underway in the eastern Chinese city of Wuzhen.
The documents, issued for the first time, are compiled by Chinese ministries, government departments, academic institutions and research centers.
Two major achievements are highlighted at this year’s WIC, said Shuzhen Yang, President of Chinese Academy of Cyberspace Studies (CACS), a new world-class think tank on the Internet established by the Office of the Central Leading Group for Cyberspace Affairs, the government’s policy-making body for Internet-related matters.
“One is the exhibitions of leading technological achievements showed yesterday, another is theoretical achievements, which are the two reports revealed today,” Yang said.
According to Yang, the two reports have three characteristics: they aim to present China’s perspective with collective efforts from a variety of institutions and think tanks; seize development trends and opportunities domestically and internationally; as well as create an indicator system in fields that do not yet have measurement criteria. 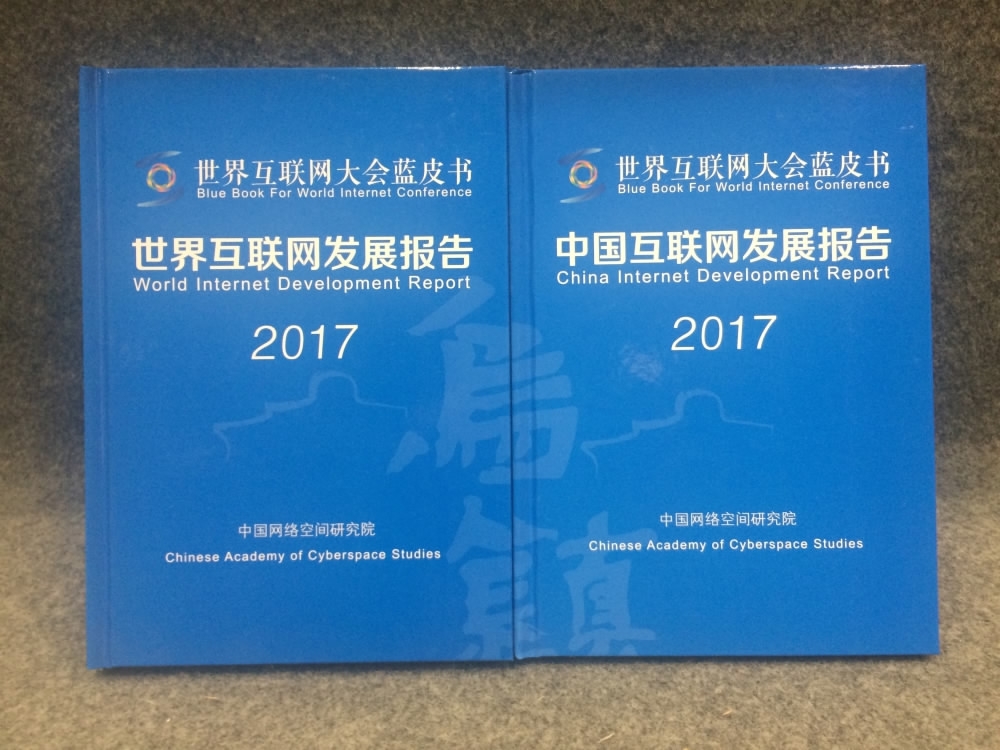 Yang noted that as one of China’s most important new think tanks, CACS is expected to play its role to the greatest extent as emphasized by President Xi, which is conducting strategic, systematic and forward-looking research on online content building, cybersecurity, and the international governance of cyberspace, among others.
CACS published the Report on Twenty Years of Chinese Internet Developments at the second World Internet Conference in 2015, and this year’s two blue books are their most advanced research results, with contributions and support from many other institutions such as China Academy of Information and Communications Technology (CAICT), State Information Center (SIC), China Internet Network Information Center (CNNIC) and a group of elite think tanks nationwide.
Yang said that during the process of drafting these two reports, CACS was determined to make them global, prestigious, precise, theoretical and general, as those research results are not only derived from current and past experiences, but also have implications that can lead the direction of future development.
Built to complement each other, the two reports focus on Internet development in China and the world covering a range of fields, including ways to build information infrastructure, information technology, cybersecurity, digital economy, e-government to online media and international governance of cyberspace. 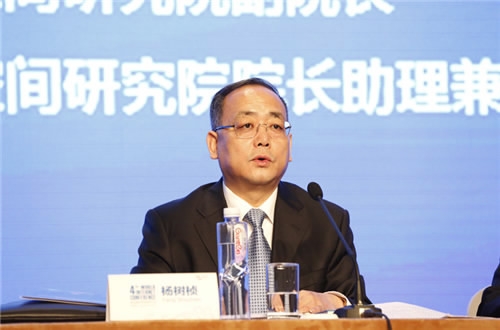 The reports also showed that today's Internet is stepping into a new phase where connections between people are gradually transforming to include connections among everything – beyond just human beings.
Not only is the whole world racing toward artificial intelligence (AI), digital economy and cyberspace, these fields have also become the new driving force countries seek for growth and administration.
On the other hand, the China Internet Development Report 2017 reviewed how China managed various affairs with the help from the Internet since the CPC’s 18th National Congress. The government maintained that innovation is the highest priority for Internet development, and China has seen prominent results in well-rounded policy-making in this space.
For example, China possesses the largest population of netizens, the second largest scale of digital economy and the highest number of retail transactions online, thanks to the cleaner cyberspace, stronger cybersecurity enforcement, information-driven economy, and the rising influence and more say in international governance.
The third characteristic, are the two new indicator systems created to set standards for measuring indices for Internet development in the world and in China.
Yang said that the index for the world assesses a given country’s Internet development both from an aggregate and average level, which is a more objective and accurate measurement of global Internet developments. 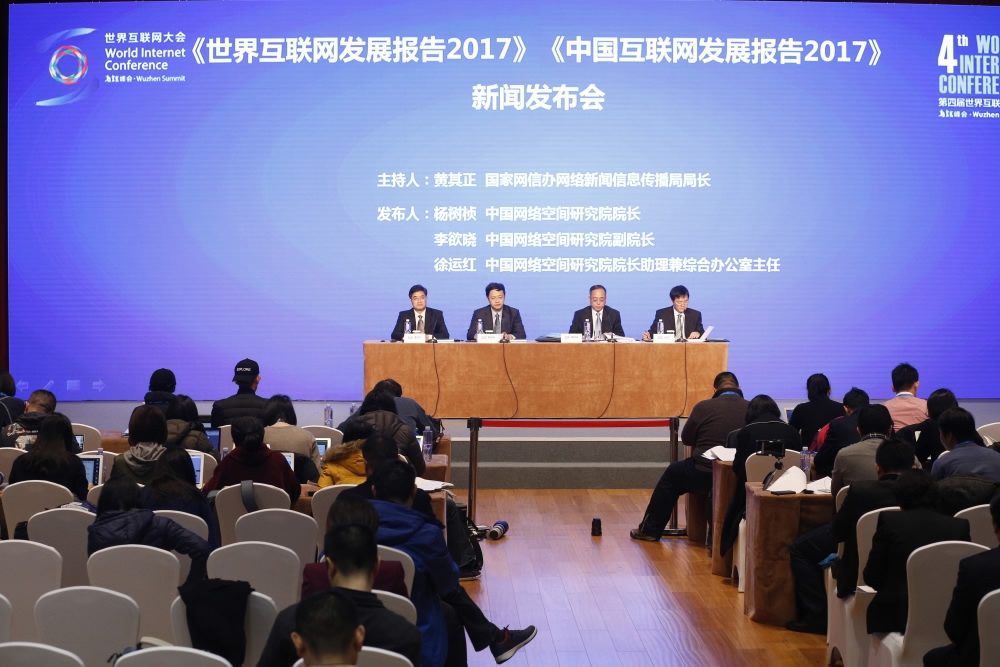 Compared to some of the already matured indices such as the E-Government Development Index (EGDI), Information Communications Technology Development Index (IDI), Global Cybersecurity Index (GCI) and Networked Readiness Index (NRI) introduced by the United Nations, International Telecommunication Union and The World Economic Forum, the new indicator systems reflect Internet development in each country.
Unlike the indices mentioned above, which focus on a special index (a “tailored” index that is customized) and a per capita index, the new system incorporates criteria on information infrastructure, the ability to innovate, industry development, Internet application, cybersecurity and Internet governance, as well as taking into consideration a per capita index, to produce a versatile judgement and comparison among 38 major countries and emerging economies.
According to the research, developed countries have the highest level of Internet development on average, followed by Europe and developing nations in Asia, Latin America and Africa to the south of Sahara. The top five on the list are the US, China, S. Korea, Japan and the UK. This is also the first time such research has been done.
Using similar criteria, the report concerning the domestic Internet situation pinpoints strategic goals for future developments. Guangdong Province, Zhejiang Province, Jiangsu Province and the cities of Beijing and Shanhai are ranked the first five using a composite index.
This year’s three-day event, which opened on Sunday, is being held under the theme "Developing digital economy for openness and shared benefits – building a community of common future in cyberspace." Yang said that new versions of China Internet Development Report and World Internet Development Report will be released every year at WIC in the future.