Is Brazil breaking up with the Arab world? 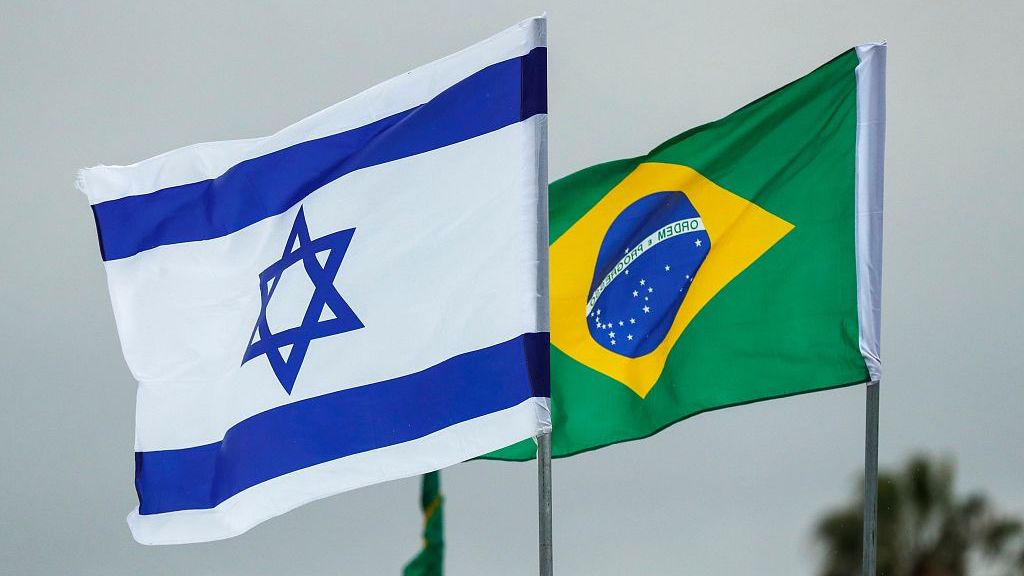 On a four-day trip to Israel, Brazilian President Jair Bolsonaro opened a new trade office to Israel in the disputed holy city of Jerusalem - a move that's seen by experts as mostly symbolic. Initially, he proposed to move Brazil's embassy to Jerusalem, which would have been more likely to anger the Muslim world.
However, Bolsonaro has to strike a balance. On the one hand, between domestic pressures – Brazil is home to a large population of Arab descent, as well as of Evangelical Christians who strongly supported Bolsonaro's election and his promise to strengthen ties to The Holy Land.
On the other hand, internationally, between Israel and the Arab world – both of whom are significant trade partners to Brazil, which is the largest economy in South America, and the 8th-largest in the world. 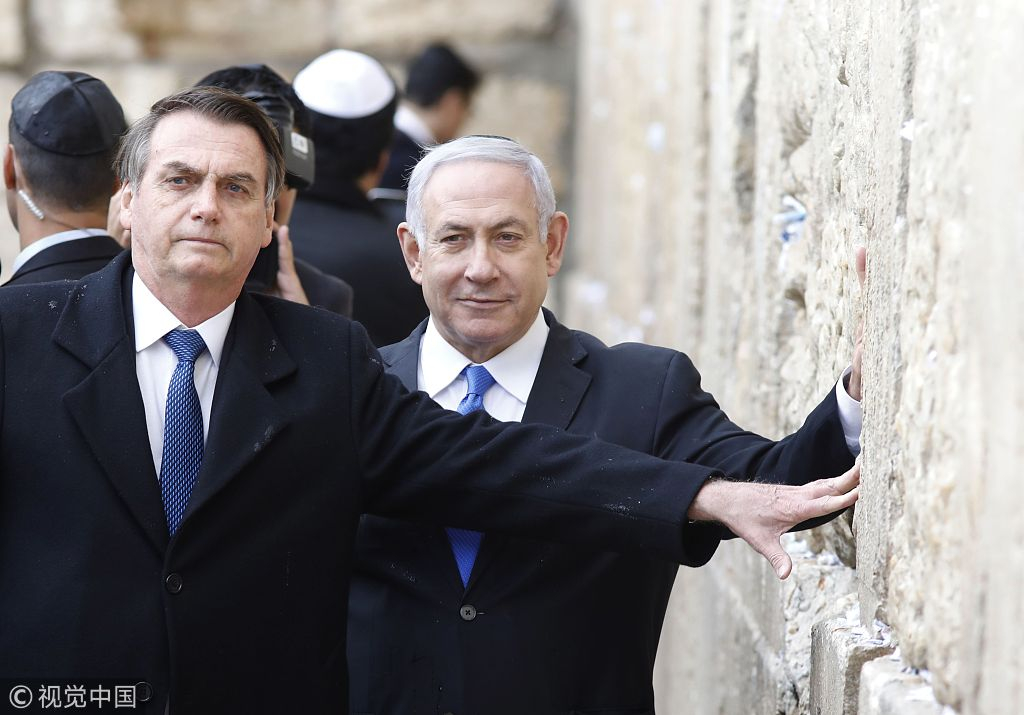 The Brazilian expert sees the visit as Bolsonaro delivering a campaign promise from five months ago and altering towards Donald Trump.
A British professor said the visit doesn't speak to the broader Brazilian Middle East policy. And an Israeli Middle East Analyst suggested that Brazil is just one piece of the puzzle of Israeli Prime Minister Benjamin Netanyahu's election campaign of being seen as the world statesman.
Dr. Glen Rangwala, a lecturer at the Department of Politics and International Studies, University of Cambridge, cites that Brazil has historically been a strong ally of many Arab states. For many years now, Brazil has presented itself as a potential leader of the group of countries in the developing world who have taken the side of the Palestinians. Brazil has been valued as an ally by many within the Arab world and by the Palestinians particularly as being one of their international advocates.
"Now that policy is now completely changed under Bolsonaro. Though the Palestinians might be upset… it's unlikely just because of Bolsonaro's visit for similar effects to happen in the wider Arab world, especially for the Gulf states, which are an important market for Brazil's trade," he predicted.
The Palestinians have condemned Bolsonaro for establishing a trade mission and for becoming the first head of state to visit the Western Wall in occupied East Jerusalem with a sitting Israeli Prime Minister.
Rangwala thinks that despite Palestinian anger, within the Arab world, this will just be seen as one element of the Israeli election. But things may change over coming months if current Israeli Prime Minister Benjamin Netanyahu is re-elected. 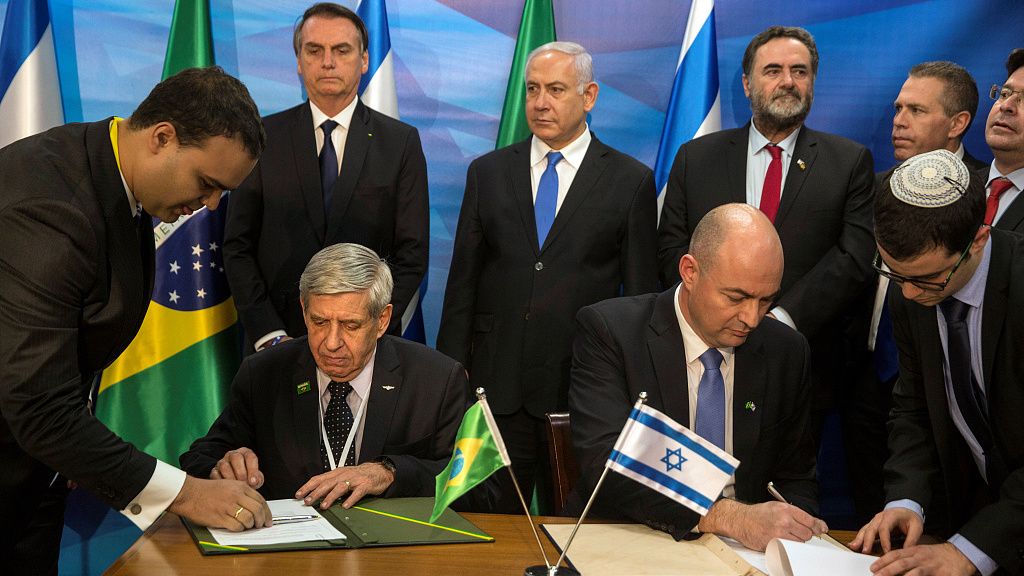 Middle East analyst Meir Javedanfar says he's impressed that Bolsonaro came this far. "I think it's likely to be that the Brazilian will stop at the trade office… Both leaders have served their domestic political interests. And I think that sufficed for now," he added.
"The image Netanyahu tries to portray to the Israeli voter for the elections is very much tied to him meeting world statesman. He was in America; he met Trump. He's now hosting Jair Bolsonaro. He is going to meet Putin a couple of days before Israeli elections by some miracle."
Javendanfar warned that Brazil should be cautious about opening an Israeli embassy in Jerusalem. Apart from meat, Brazil's Embraer is the world's third-biggest aircraft producer after Airbus and Boeing sell to Middle Eastern countries including Saudi Arabia.
Brazil is not alone in its consideration. Guatemala has followed the U.S. steps in moving its embassy. In recent weeks, several countries have announced plans to open Israeli trade or cultural centers in Jerusalem. The list includes Czech Republic, Hungary, Slovakia and more.

Prof. Alessandro Golombiewski Teixeira from the School of Public Policy & Management at Tsinghua University says Bolsonaro is delivering his campaign promise and trying to alter Brazil's foreign policy towards Donald Trump.
He sees no reason besides political reason for Brazil to have a trade office in Jerusalem. Commercial relations between Brazil and Israel are well established. And Tel Aviv and Haifa in the north are better options.
Teixeira thinks that historically, Brazil has a foreign policy that was to mediate conflicts, not to get into the conflict. This is not a good sign for the future foreign policy to move in those directions.
"I believe the foreign policy of Jair Bolsonaro is very aligned or trying to be very aligned to Donald Trump policy in the United States. The Arabic countries are the fifth largest partner of trade and investment in Brazil. So it's different how the United States move than Brazil or Guatemala."
Teixeira points out that almost three to five percent of the population in Brazil is of Arab descendant. There's a larger population of Lebanese in Brazil than you have in Lebanon, not to mention the Syrian and the Turkish community in Brazil.
"So that's a very conflicted situation for President Jair Bolsonaro. When he's going back to Brazil, the private sector is going to push him to stop there."
SITEMAP
EXPLORE MORE
DOWNLOAD OUR APP