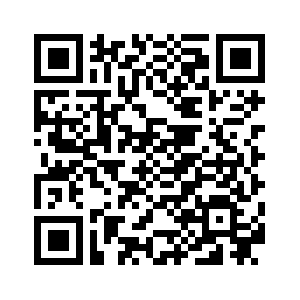 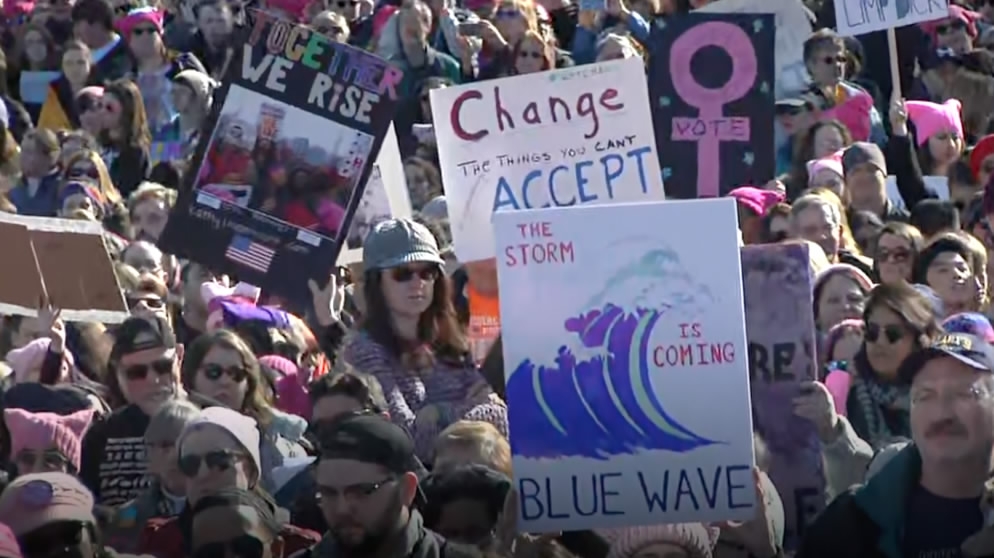 Several hundreds of thousands of people took part in Women’s Marches around the US on Saturday to protest President Donald Trump’s first year in office and speak out for women’s rights and against sexual harassment following a recent wave of high-profile scandals.
Protesters – women and men – paraded with colorful placards and chanted in cities from coast to coast in an angry but peaceful atmosphere.
Further protests were planned on Sunday, in the US and around the world, from Japan to Italy, Uganda and Germany.
What’s it about?
The protests were held on the first anniversary of Trump’s arrival in office. Women’s Marches on January 21, 2017, drew an estimated five million people, becoming the biggest day of protest in US history. Similar rallies were also held on all seven continents. 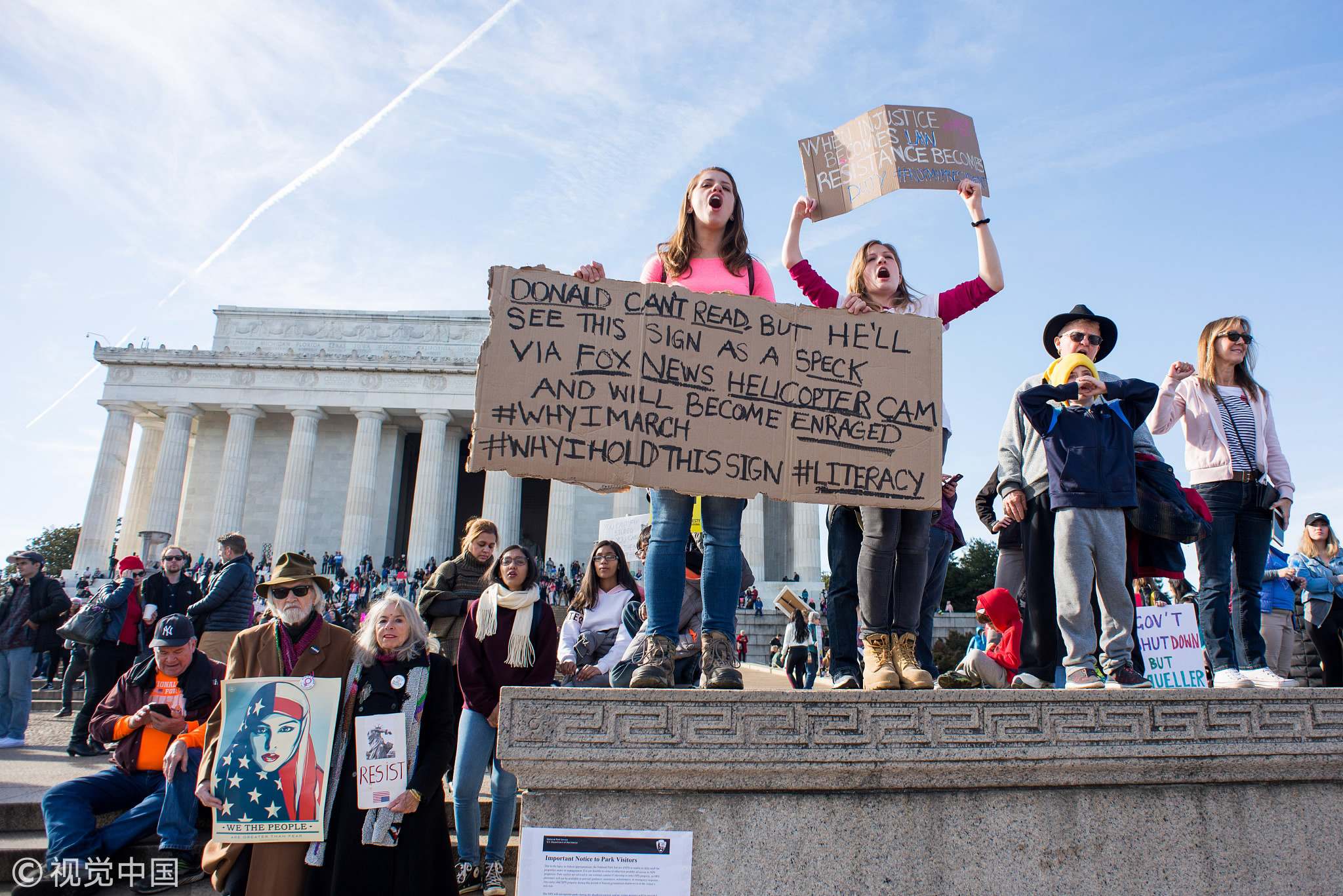 Protesters gather on the National Mall as part of a Women's March rally in Washington, DC, January 20, 2018. /VCG Photo

Protesters gather on the National Mall as part of a Women's March rally in Washington, DC, January 20, 2018. /VCG Photo

On Saturday, many again wore the pink “pussy hats” donned by protesters last year in response to Trump’s infamous comment about groping women.
Numbers
The largest March on Saturday took place in Los Angeles, where up to 600,000 people – including actresses Natalie Portman, Eva Longoria and Scarlett Johansson – turned up to call for change, according to Mayor Eric Garcetti.
In Chicago, protesters numbered between 200,000 and 300,000. In New York, police estimates stood at around 200,000.
Further rallies took place in about 250 cities around the US, from Nebraska to Texas and Pennsylvania. 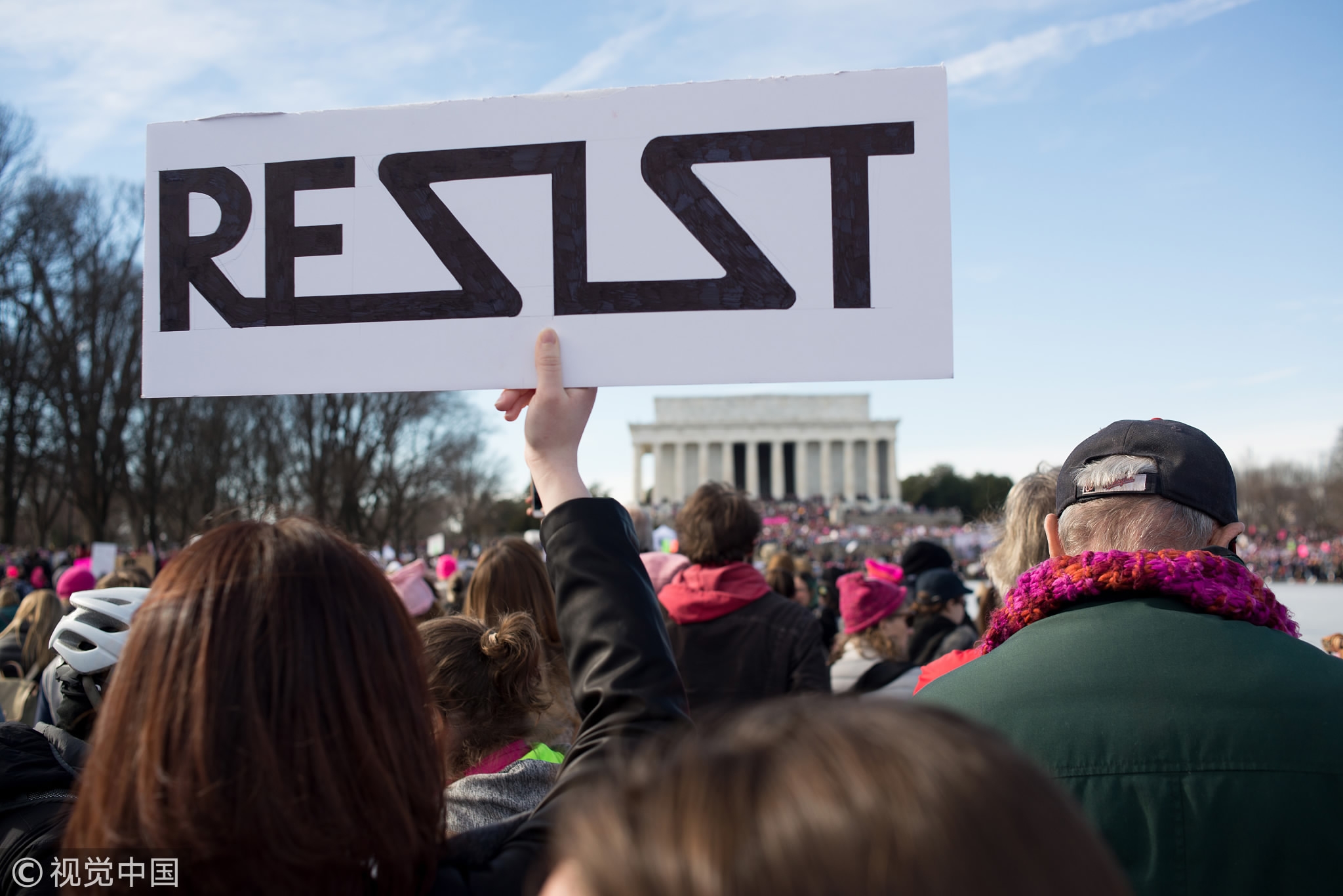 A protester holds up a sign during a Women's March rally at the National Mall in Washington, DC, January 20, 2018. /VCG Photo

A protester holds up a sign during a Women's March rally at the National Mall in Washington, DC, January 20, 2018. /VCG Photo

On Sunday, a large demonstration was expected in Las Vegas.
The Women’s March website also listed events as far as Kyrgyzstan, Kenya, Iraq and Norway. In Beijing and Shanghai, a group named Democrats Abroad was holding events to register overseas voters.
Women’s rights and… ?
The protesters rallied over a wide range of issues. While last year’s Women’s Marches focused primarily on gender equality, human rights and immigration policies, this year’s editions went further in pushing for voting rights and better representation in government.
The rallies were accompanied by the hashtag #PowerToThePolls as organizers tried to mobilize voters but also potential candidates for this year’s midterm elections.
In Washington, DC, several high-ranking Democrats – including House of Representatives Minority Leader Nancy Pelosi and Senator Kirsten Gillibrand – joined the March, calling on women to run for office to make their voices heard.
“While we have this president celebrating his one-year anniversary, let's give him an 'F' (grade) for his performance," Pelosi said, adding: "We don't agonize, we organize." 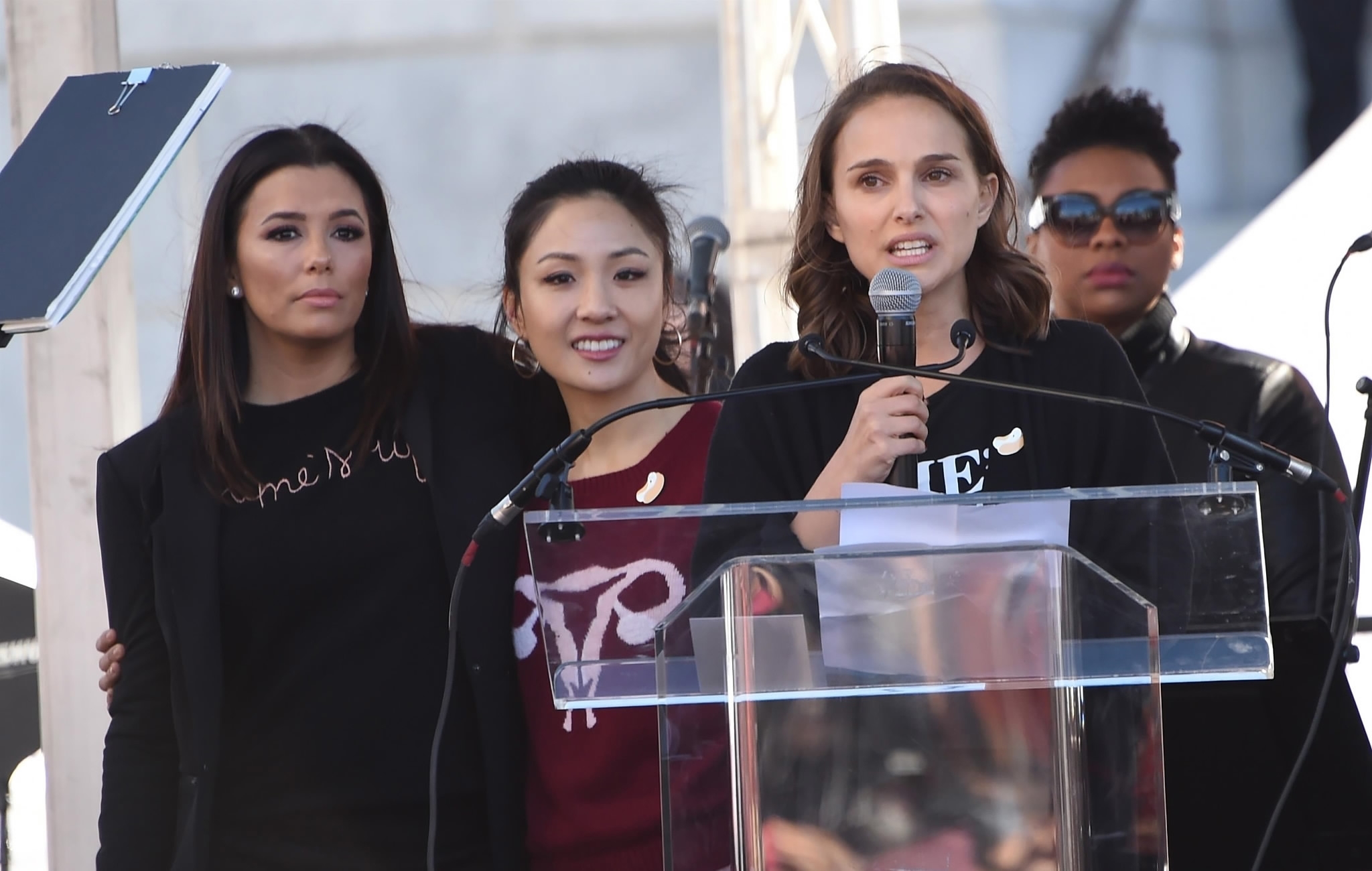 In Los Angeles, actress Eva Longoria urged marchers: “Your vote is the most powerful tool at your individual disposal.”
“Everybody who has the privilege of voting must do so,” she said.
The midterm elections in November will be an opportunity for the Democrats to regain seats and possibly even a majority in the House and Senate, which are both currently in Republican hands.
Speakers at the various rallies slammed Trump and his policies, which they said hurt women.
Men meanwhile also turned up to show their support.
Speaking at the event in Park City, Utah, where the Sundance Film Festival is underway, rapper Common urged the crowd: “It can't just be women standing up for women. Just like it can't just be black people standing up for black people. It has to be men saying hey, we are here to support. We are here to learn too.”
#MeToo
In the wake of the #MeToo and #Timesup movements, this year’s Marches inevitably also focused on sexual harassment and abuse. 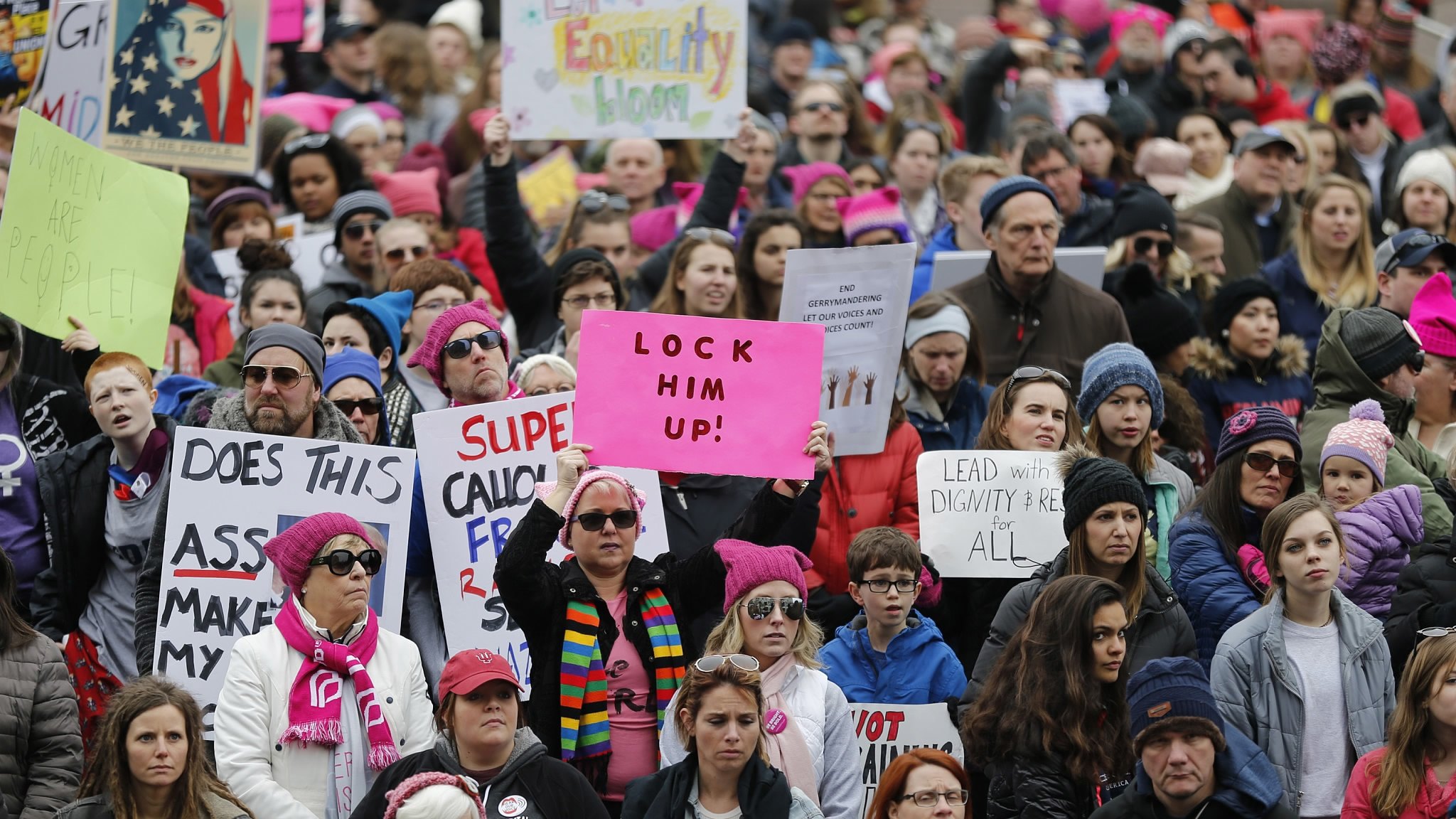 Protesters take part in a Women's March in Indianapolis, US, January 20, 2018. /VCG Photo

Protesters take part in a Women's March in Indianapolis, US, January 20, 2018. /VCG Photo

Speaking at the demonstration in Los Angeles, actress Olivia Munn vowed that sexual assault victims would not be alone: "We will always support you, stand beside you, so you don’t have to stand alone.”
Since the first Women’s March last year, a raft of sexual abuse and harassment scandals have toppled top figures in entertainment, the media and politics, starting with former Hollywood boss Harvey Weinstein.
But with so many focuses – protesters’ signs touched on everything from abortion and gun violence to immigration and Trump’s impeachment – some said this year’s March lacked cohesion and a clear message.
On Twitter, Trump talked up his work over the past year and argued women were reaping the benefits.

“Beautiful weather all over our great country, a perfect day for all Women to March,” he posted.
“Get out there now to celebrate the historic milestones and unprecedented economic success and wealth creation that has taken place over the last 12 months. Lowest female unemployment in 18 years!”
Making their voices heard
Many of those who attended the rallies were already part of the crowds at last year’s Women’s Marches but said they wanted to show they still did not approve of Trump or his policies.
“We are unhappy with the current administration and what it stands for, and want our voices to be heard,” one woman, who joined the rally in Chicago with her 14-year-old daughter, told Reuters. 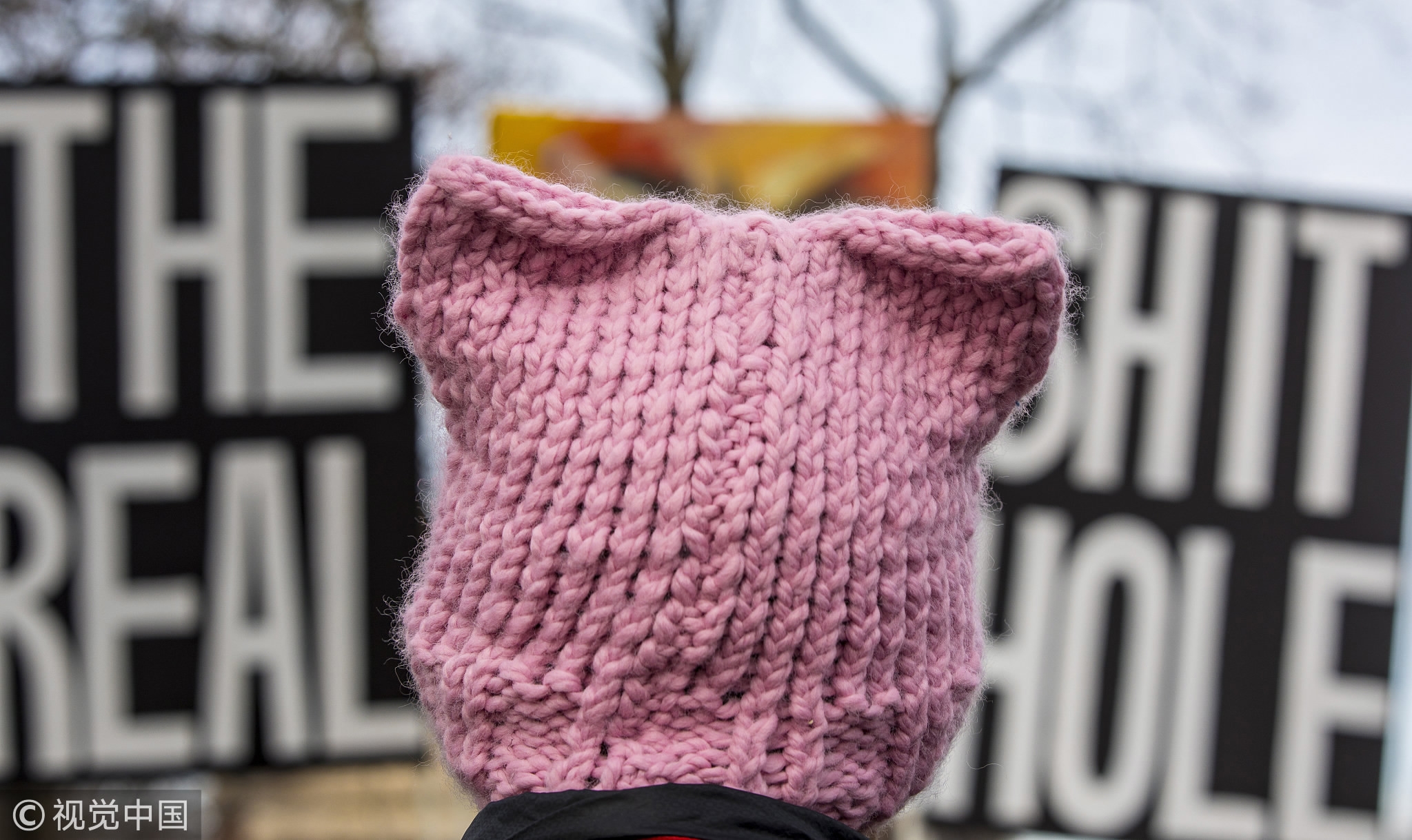 Another woman in Los Angeles told AFP news agency: “I want him (Trump) to be aware that we are coming together as a powerful force and we're going to change this."
Protesters around the country held placards that read “Fight like a Girl,” “Resist” and “Stop Trump.”
"I have little respect for President Trump," one protester told Xinhua News Agency in New York. "He stands against women, abortion, immigration... quite frankly he stands against what America stands for."
11157km