Pediatric Health: WHO advises limited or no screen time for children under 5 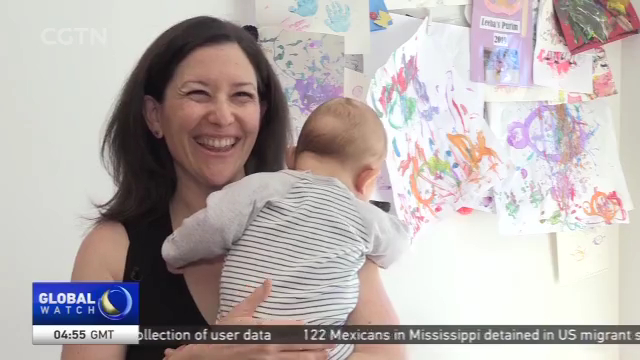 The World Health Organization is worried about how much time your children are spending in front of electronic screens. The UN agency says the mesmerizing effects of videos may be keeping young kids from building sophisticated social skills that are central to human development. CGTN's Roee Ruttenberg spoke to parents in Los Angeles to see what they think.
Like many Americans, Emily and Nathan Miller struggle over how much screen time their little ones should have.
EMILY KANE MILLER MOTHER "We talk a lot with other parent friends. And we follow our gut. ('And what's your gut?') My gut is as little as we can get away with."
And the World Health Organization says not that much. Baby Judah, it says, should get zero screen time. Two-year-old Leeba can have a little. But very little. Which, in today's age, parents admit, isn't so easy.
EMILY KANE MILLER MOTHER "They're growing up in a moment where you have the internet-of-things, you have people who are going be having professional lives because of all of this kind of technology. And I think to have your kids exposed to zero is also a problem. And we're just trying to do our best. My kid just barfed on my shoulder."
But not all screens are created equal, says Revital Heller High.
REVITAL HELLER HIGH MOTHER "There are ed-tech - education technology - start-ups and apps that are happening, where people are really basing it in learning science, and thinking about educational experiences for kids. I think those can sometimes be very valuable."
The mother-of-one and former teacher now develops digital content. She says screen-time can be a social equalizer, giving more children access to early education. She also says learning digital skills at an early age can be good.
REVITAL HELLER HIGH MOTHER "The thing she actually likes to do most on the iPad and the iPhone is just to like push the buttons and see what happens, and swipe from side to side. She actually figured out how to pinch and zoom."
REVITAL HELLER HIGH MOTHER "It's not academic, but it's educational. She's understanding cause and effect. She's learning basically digital literacy. She's problem-solving. She figured out that the home button takes you out of the thing you are in."
ROEE RUTTENBERG LOS ANGELES "One of the biggest problems is that there's simply not enough conclusive evidence. The technology is still relatively new, it's quickly changing, and it's unclear what the long effects will be. And, there's not really any widespread agreement over what actually constitutes screen time."
REVITAL HELLER HIGH MOTHER "You have to know your kid, and you have to pay attention to your kid and pay attention to what they are consuming."
EMILY KANE MILLER MOTHER "I think the only wrong thing is not thinking about it. Everyone's doing their best, everyone's trying to be the best parent they can be. You gotta make it work."
Roee Ruttenberg, CGTN, in Los Angeles.
SITEMAP
EXPLORE MORE
DOWNLOAD OUR APP