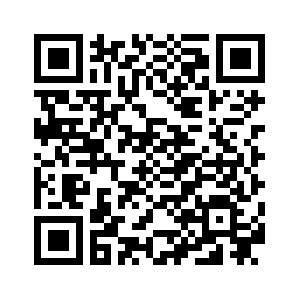 An Israeli plan to revive a pre-World War era rail link to Saudi Arabia has prompted concerns in Egypt over the long-term prospects of the Suez Canal Economic Corridor project, in which China is the largest investor.
The Egyptian mega project is seen as being in sync with the China-proposed Belt and Road Initiative and therefore the Israeli proposal could lead to indirect consequences for Beijing’s Suez investments.
Last month in an interview with Saudi news portal Elaph, Israeli Minister of Intelligence and Transportation Yisrael Katz raised the possibility of reviving the Hejaz Railway that once connected Damascus in Syria with Israel’s Haifa port and extended up to Medina through the Hejaz region of Saudi Arabia. 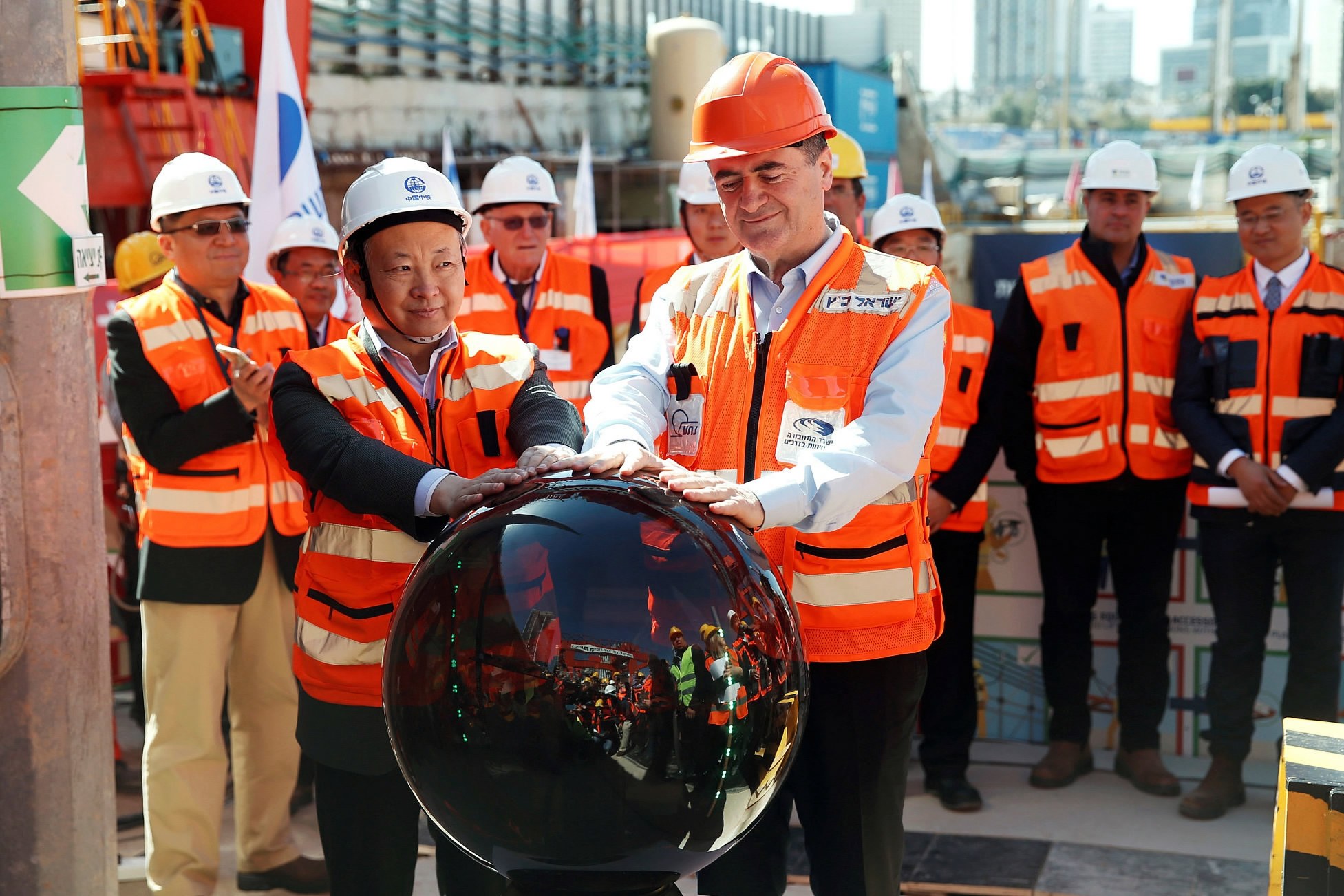 Yisrael Katz (front), Israel's Minister of Intelligence and Transportation, and employees of the China Railway Engineering Corporation, take part in an event marking the beginning of underground construction work of a light railway in Tel Aviv, Israel on February 19, 2017. /VCG Photo

Yisrael Katz (front), Israel's Minister of Intelligence and Transportation, and employees of the China Railway Engineering Corporation, take part in an event marking the beginning of underground construction work of a light railway in Tel Aviv, Israel on February 19, 2017. /VCG Photo

“We will extend the track that connects Haifa and Beit Shean to the Sheikh Hussein Bridge [the border crossing between Israel and Jordan], the Jordanians will extend it to connect to the Saudi railways, and that’s how we will connect Haifa to the Gulf,” Katz was quoted as saying. “I want to revive the Hejaz Railway. This is not a dream at all,” he added.
Katz also said that the proposed railway will cut freight expenses from Europe to the Gulf countries stressing that 25 percent of Turkey’s exports to the Gulf travel through Haifa’s port and pass through Jordan.
The minister asserted that Israel has completed the studies for the project and has also prepared the blueprint for the railway, which could be executed within two years once approved by Jordan, Saudi Arabia and its Gulf allies. He also claimed that Israel has already extended the proposal to these countries, without getting into the details.
While Israel shares diplomatic ties with Jordan in accordance with a 1994 peace treaty, it doesn’t have any diplomatic relations with Saudi Arabia and other Gulf states. However, lately Israel and Saudi Arabia have appeared to be engaging covertly at a strategic level – drawn by their common fear of regional rival Iran – with speculation of possible diplomatic ties in the offing.
Katz reiterated his convictions at the Calcalist 2018 Forecast Conference of major investors and businessmen in Tel Aviv on December 25, where he described the Al Hejaz Railway as a historic project.
“I am pushing this forward. I met several times with US officials and bodies to discuss this project. We only need 200 kilometers of track to connect the first train in Saudi Arabia to its last terminal in Israel via Jordan,” he said, adding that the step would represent the arrival of Riyadh's “economic force” in Israel.

Hejaz Railway, a rival to Suez? 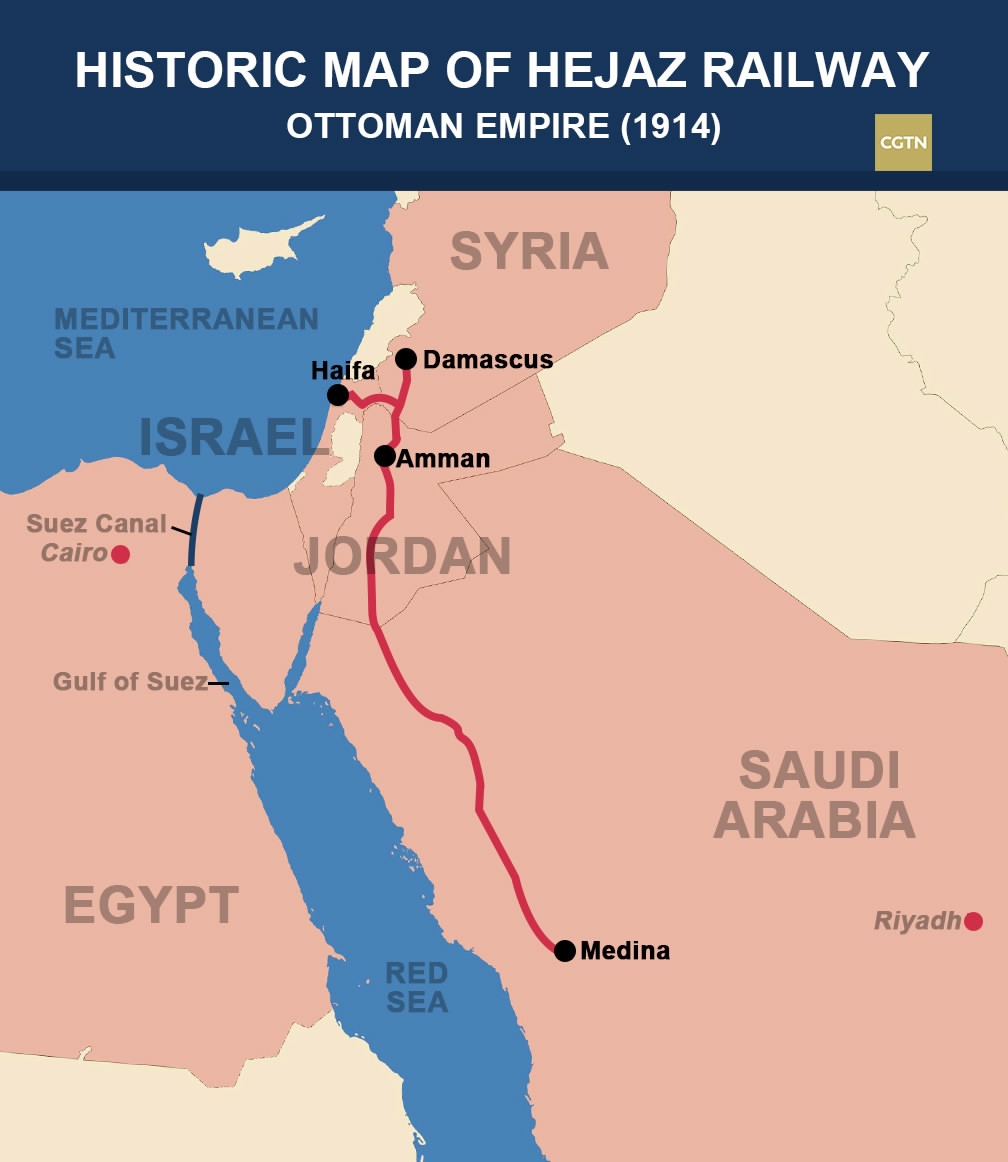 The original Hejaz Railway was built in 1908 to link Damascus to Medina, and was then extended to Haifa on the Mediterranean Sea. Several segments of the railway were either destroyed or closed due to damage following World War I.
If restored, the railway will offer a vital link between the Mediterranean Sea and the Gulf region, running parallel to the Red Sea coast and the Suez Canal. Naturally, Egypt – the first Arab nation among the only two, along with Jordan, to have signed a peace pact with Israel – is worried about the impact it may have on the Suez Canal Economic Corridor.
The news of a likely Israeli-Saudi rail link has triggered a fierce debate in Egypt where some analysts consider the railway to be a direct rival to transportation through the Suez Canal.
“This railway will be an alternative to the Suez Canal. It will affect its future revenues, especially as it will be safer than the canal in the case that the Yemen conflict escalates and the Houthis and the Iranian navy try to control Bab al-Mandab Strait [off the southern tip of Yemen],” former Egyptian presidential advisor Ahmed al-Meslemani warned in an interview with Egypt’s Dream TV.
A retired Egyptian army officer, Mandou Attieh, rejected the “simple” analysis. “This is not as simple as Katz or Meslemani are saying,” Attieh told Al-Monitor.
“The control by Iran or the Houthis of Bab al-Mandab Strait is not only a hostile act toward Egypt and the Suez Canal, it is an international hostile act and will affect trade between the East and West. Any attempt by Iran or the Houthis to control Bab al-Mandab Strait will face a fierce and violent international response,” he said, dismissing Meslemani’s argument.
Mustafa Al-Rasheed, a professor of economics at the Arab Academy for Science, Technology and Maritime Transport, also said that the “Israeli project is not a competitor to the Suez Canal, to begin with, and cannot affect its revenues.”
The fact remains however that Egypt is the biggest beneficiary from the economic activities on the Suez Canal, earning billions of dollars in annual revenue. Cairo’s Suez Canal revenues rose to 5.3 billion US dollars in 2017 from 5 billion US dollars in 2016, according to a statement by the Canal authority released earlier this month.
The canal is the fastest shipping route between Europe and Asia and one of the Egyptian government’s main sources of foreign currency. 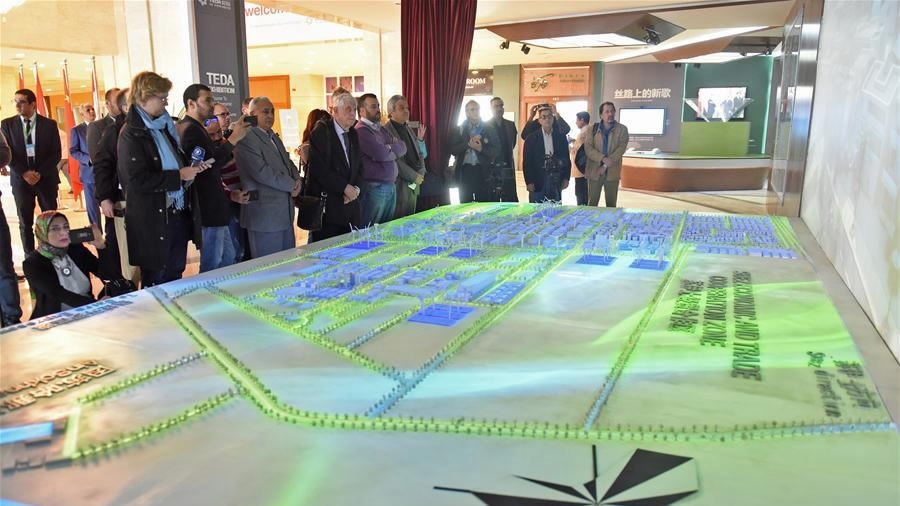 Journalists view a model of the Suez Economic and Trade Cooperation Zone made by China's TEDA corporation, one of the oldest industrial developers of the Suez Canal Economic Zone (SCZone), in Ain Sokhna, Egypt, on March 13, 2017. /Xinhua Photo

Journalists view a model of the Suez Economic and Trade Cooperation Zone made by China's TEDA corporation, one of the oldest industrial developers of the Suez Canal Economic Zone (SCZone), in Ain Sokhna, Egypt, on March 13, 2017. /Xinhua Photo

To further capitalize on the canal’s economic potential, Egyptian President Abdel Fattal el-Sisi launched the Suez Canal Economic Corridor project in August 2014. Its aim is to increase the role of the Suez Canal region in international trading and to develop the three canal cities of Suez, Ismailia and Port Said.
China last year emerged as the largest investor in the development of Egypt’s mega project as it is integrated with the connectivity goals of the Belt and Road Initiative.
During his January 2016 visit to Cairo, Chinese President Xi Jinping outlined a total investment of about 3 billion US dollars in the project, creating 10,000 new jobs in Egypt. As of December 2017, Chinese investments in the Suez Canal Economic Corridor exceeded 1 billion US dollars, resulting in the creation of 3,000 jobs, Han Bing, minister counselor for economic affairs at the Chinese Embassy in Cairo, was quoted as saying by Egypt Today newspaper.
"Currently, the Chinese investments are the largest. We highly appreciate the earnestness of our Chinese partners. They were among the first to act as an industrial developer in the zone," Ahmed Darwish, chairman of the Suez Canal Economic Zone (SCZone) told Xinhua last March.
China's TEDA corporation, one of the oldest industrial developers in the region, has seen a steady increase in the number of its development projects and factories since it entered Egypt and established a joint Suez Economic and Trade Cooperation Zone in the Ain Sokhna district of the Suez Canal Corridor, east of capital Cairo.
"TEDA has put in place the micro-infrastructure and is re-promoting the land. They are doing an excellent job. This partnership is a win-win situation," Darwish added.
Earlier this month, at an event in Cairo, an Egyptian business delegation sought more investments from Chinese companies in the Suez corridor project.
"We seek to attract Chinese companies in the framework of the Belt and Road Initiative to invest in Egypt, especially in the Suez Canal [Economic] Corridor to facilitate exports to African countries and thus benefit the Egyptian and Chinese economy at the same time,” said Doctor Alaa Ezz, Secretary General of the Egyptian Chambers of Commerce.
Although it is premature to suggest any direct impact from the Hejaz Railway on the revenues of the Suez Canal, a rail link between Israel and Saudi Arabia certainly has the potential to unsettle the virtual monopoly of the canal on trade between Europe and the rest of Asia, indirectly affecting China’s long-term stakes in the Suez Canal.
[Cover photo: A container ship passes through the Suez Canal. /VCG Photo]