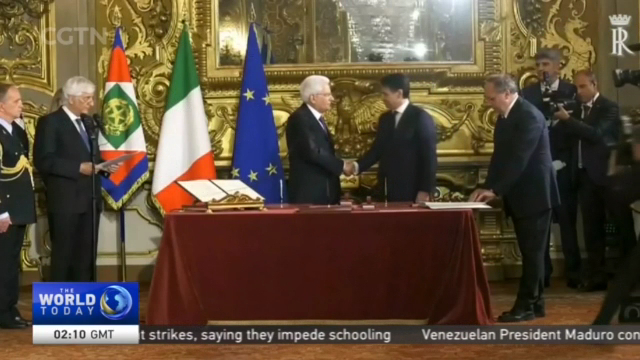 Italy's Prime Minister Giuseppe Conte has announced his intention to resign. The move was followed by a motion of no-confidence, submitted by the League Party. What comes next for the Italian government will very much depend on the country's President Sergio Mattarella. CGTN's Michal Bardavid has the details.
On Tuesday, Italian Prime Minister Giuseppe Conte gave a speech in parliament and announced his resignation. The move comes following a motion submitted earlier this month by the country's deputy prime minister and Interior Minister Matteo Salvini for a no-confidence vote against Conte.
On August 8th, Salvini declared the League's coalition government with the Five Star Movement was no longer workable and had called for snap elections.
While addressing the Senate, Conte accused the Interior Minister Matteo Salvini of putting his party's interest ahead of Italy's interests
Recent polls have put the far-right League party numbers ahead of the Five Star Movement and in the European elections in May, the League received double the votes of the Five Star Movement.
Conte stated Salvini's moves would push Italy into chaos.
GIUSEPPE CONTE ITALIAN PRIME MINISTER "The decision to postpone to the present the communication of a decision evidently taken for some time - and I regret to say it with such clarity - is a gesture of grave institutional and disrespectful imprudence towards the parliament and in any case liable to tip the country into a spiral of political uncertainty and financial instability."
MICHAL BARDAVID ROME "The Five Star Movement and the League have been at odds over several issues both political and economic, but the latest crisis was triggered by disagreements over a high-speed train between France and Italy."
Also addressing the Italian Senate on Tuesday, Salvini stated that he was ready to continue working with the current government to approve a budget for 2020. Salvini has also clashed over anti-immigration issues with Conte recently as Salvini blocked the entry of the Open Arms rescue boat that was stranded off the coast of Italy for 19 days, despite a court order allowing its entry. While Conte stresses that elections would be damaging for Italy, some experts disagree.
CARMELO RAPISARDA CENTRAL EDITOR IN CHIEF, AGI "Elections are democracy, so, if the country decided that we want a different government and this government has the strength to do a strong policy, that would be good for the country, not bad."
The decision on whether or not to have elections lies with the country's President Sergio Mattarella. Alternatively, he could try to seek the formation of a new coalition. Michal Bardavid, CGTN, Rome.
SITEMAP
EXPLORE MORE
DOWNLOAD OUR APP