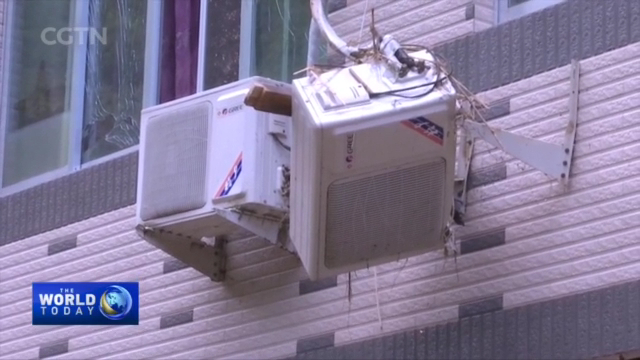 Super typhoon Lekima has triggered a deadly landslide in Shanzao Village of Yongjia County of southern China's Zhejiang Province. Roads to the village were not re-opened until Sunday morning. CGTN's Han Peng made a treacherous journey into the heart of the catastrophe.
HAN PENG SHANZAO VILLAGE "Half of this road has already collapsed. And right ahead of us, you can see minor landslides here and there. Our car was actually moving on the hollow road that was caused by the torrential rain. Until now, we find how difficult it is for heavy vehicles to move on it. And now all we can do is to walk into the village on foot. We do not know if the road we are walking on is also empty."
Shanzao village is in one of the region's lowest-lying valleys. The typhoon rose water levels by 10 meters in just 10 minutes, and triggered the catastrophe.
HAN PENG SHANZAO VILLAGE "This is it. This is where the deadly landslide took place. Despite the treacherous journey, we can see the rescue workers have managed to bring in the heavy equipment. This crane is now paving the road for more vehicles to bring in the much-needed assistance to the people who are still inside."
Most survivors have stayed in the village. The destruction of their hometown though will no doubt leave a lasting impression in the minds of children, as rescuers continue to search for the missing.
HAN PENG SHANZAO VILLAGE "The more we get into the village, the more heartbreak we see. Here we can see the local resident's vehicle has been completely destroyed by the falling rocks from the mountains. And here, even the rescue machines have been trapped because of the secondary landslides."
ZHOU XUYI, RESCUER WENZHOU FIREFIGHTING TEAM "We're using drones to monitor the situation on the ground. We also deployed life detecting equipment to search for missing persons, including sonar equipment under the water."
HAN PENG SHANZAO VILLAGE "Before the super typhoon, this was a thriving village. But everything changed after its landfall on Saturday. Here, we can see it was actually the home of the villagers, but now there is only one side of the wall that is still standing. Everything has been turned upside down."
With the typhoon moving north, rainfall has stopped, creating better rescue conditions. Yet the emotional wounds won't heal for a while, with many still reeling from the disaster. Han Peng, CGTN, Shanzao village, Yongjia County, Zhejiang Province.
SITEMAP
EXPLORE MORE
DOWNLOAD OUR APP