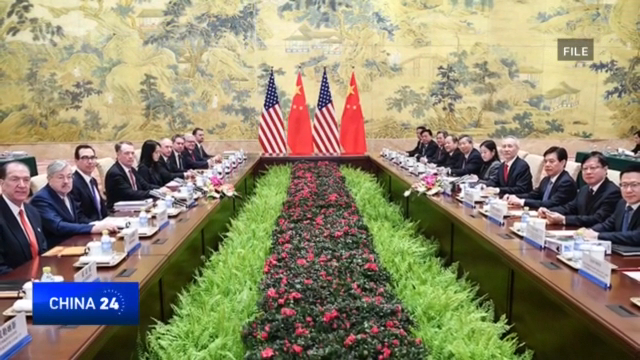 We begin with the latest on China-US trade. The two sides have held their 12th round of negotiations in Shanghai earlier this week. This is the first round of face-to-face talks after the two countries' top leaders met on the sidelines of the G20 Summit in Japan in June. Our reporter Wang Hui reports.
Vice Premier Liu He, US Trade Representative Robert Lighthizer and US Treasury Secretary Steven Mnuchin met for a new round of China-US trade negotiations in Shanghai on Tuesday and Wednesday.
GAO FENG CHINESE COMMERCE MINISTRY SPOKESPERSON "Both sides conducted sincere, efficient and constructive in-depth exchanges on major economic and trade issues of common interest. They also discussed China's possible purchase of more US agricultural products based on domestic need, and the US creation of favorable conditions for the transactions."
Chinese Commerce Ministry spokesperson Gao Feng has confirmed that since July 19th, some Chinese companies have consulted with American suppliers on the prices of soybeans, cotton, pork, and sorghum. And some purchases have already been made. Those companies who have already purchased items have also applied for the removal of additional taxes on those agricultural products, and the Chinese government is processing those applications.
This is the first round of high-level face-to-face trade talks since Chinese President Xi Jinping and US President Donald Trump met in June during the G20 Summit in Japan. At that time, they agreed to resume trade talks, which had been on hold for about 50 days prior to the summit.
GAO FENG CHINESE COMMERCE MINISTRY SPOKESPERSON "The two countries communicated on two subjects. One is about their views of the past. They discussed the reasons for the pause in negotiations, and clarified their views on some important trade and economic issues. Second, they discussed what to do in the future. They clarified the principles, ways and schedule for the next step of negotiations."
Gao added that as long as the two sides uphold the principles of mutual respect, equality, and mutual benefits, and take care of each other's reasonable concerns, they will find ways to resolve the problem.
WANG HUI BEIJING "Gao announced that the next round of face-to-face trade talks will be held in the US in September. He says that the two working teams will maintain close communication and have concentrated negotiations on preparing for the next round of trade talks. Wang Hui, CGTN, Beijing."
SITEMAP
EXPLORE MORE
DOWNLOAD OUR APP