A farmer's dream to fly 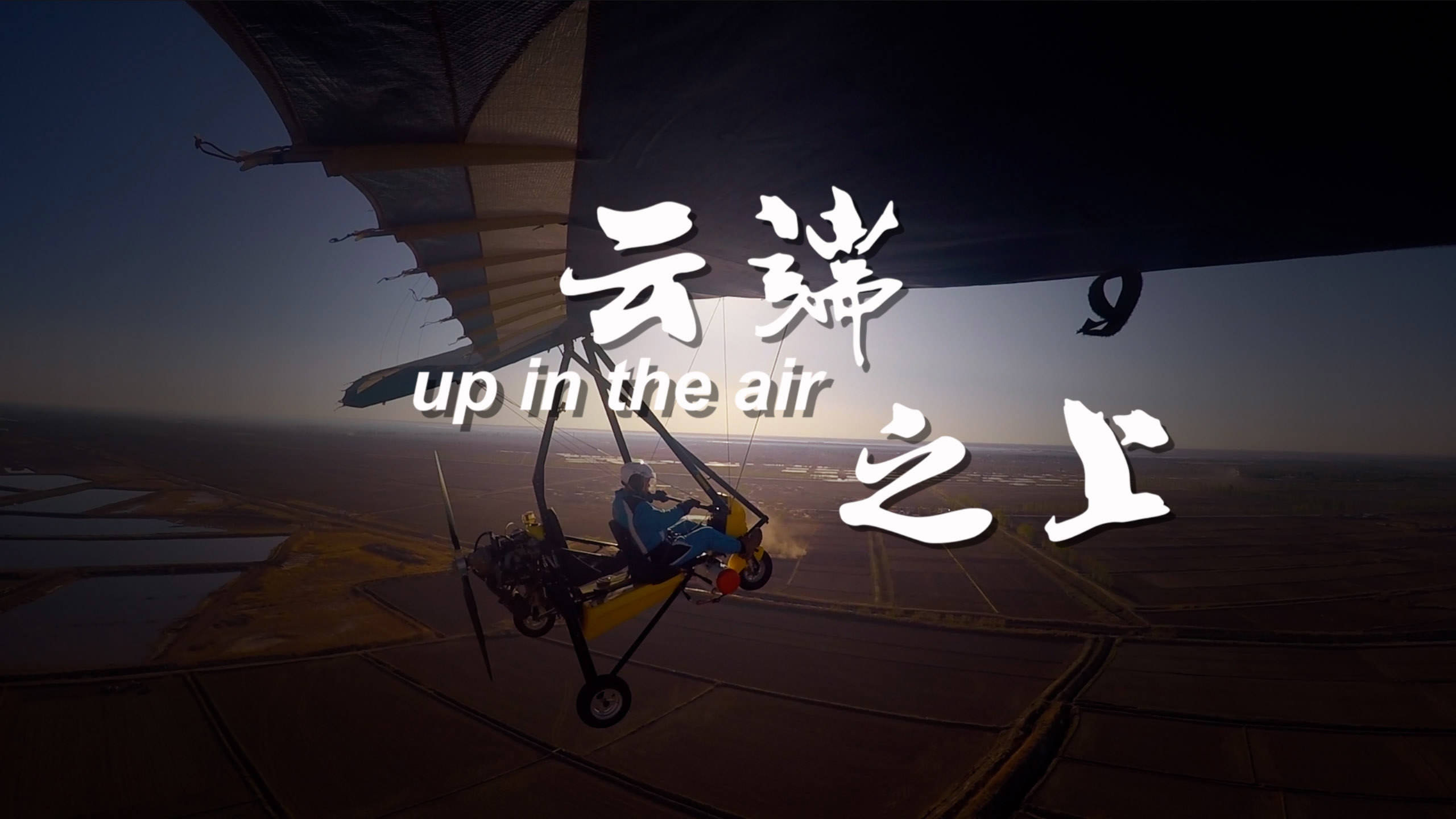 Born in a small village in northwest China, 45-year-old Liu Yibing spent most of his younger days tending wheat fields and rice paddies.
While others fixed their eyes to the ground and wished for a good harvest, he looked up and dreamed that one day he could touch the sky. 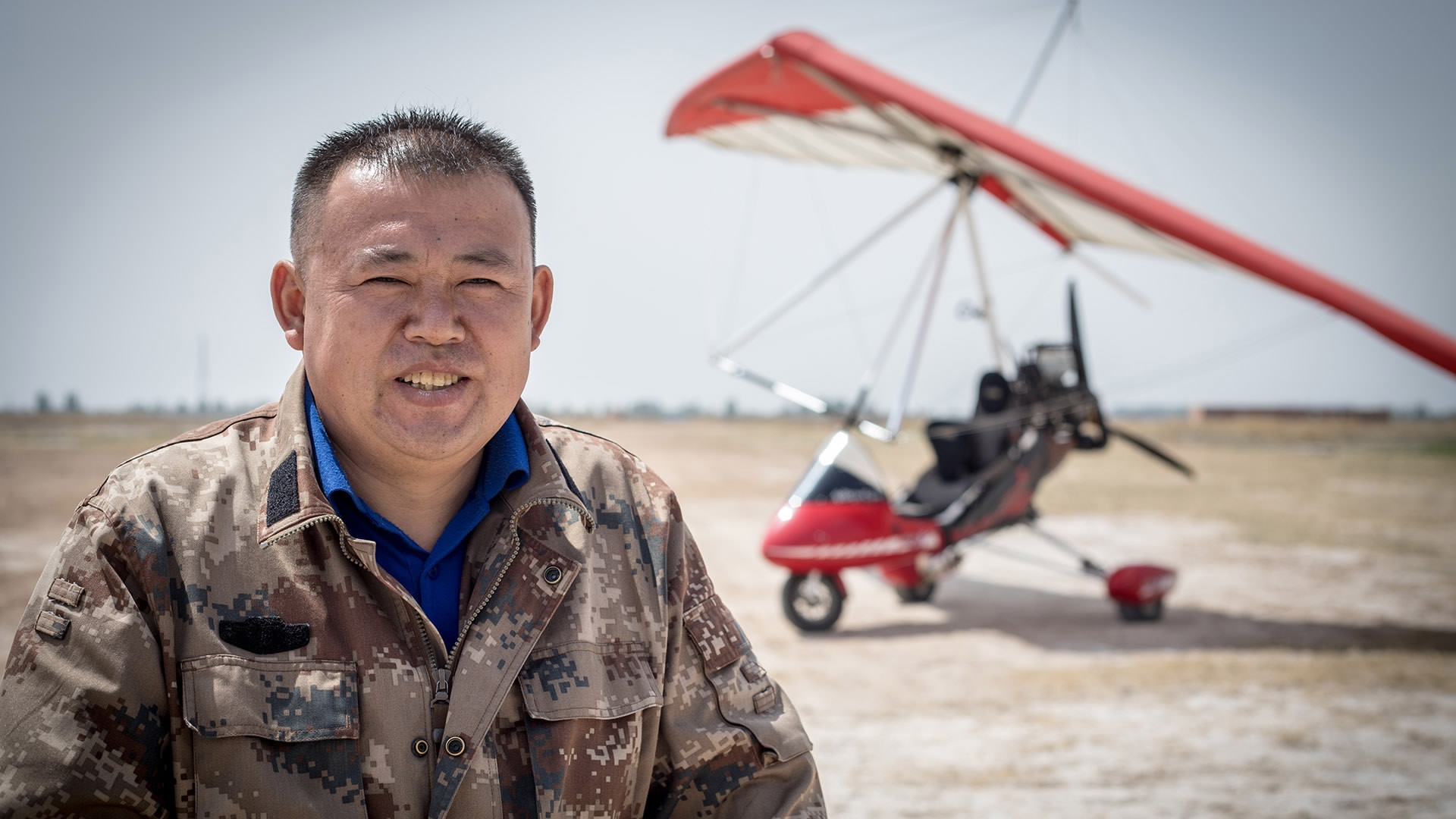 Started from the scratch

Liu became obsessed with flying when he came across a magazine on aviation in the 1980s – before authorities started issuing private pilot license to the general public. Without access to professional training, Liu took matters into his own hands. At 18, he made his first attempt by assembling an aircraft with wings made of bedsheets and a motor ripped from a tractor. When he tested the machine, however, it barely moved and was nowhere near lifting off.
The setback didn’t stop him but raised concerns among friends and family. To them, the young man’s ambition was no more than a rush of blood to the head that couldn’t put food on the table. Liu’s parents were both farmers. His biological father was killed in a car accident when he was 10 and his mother was remarried to a village doctor. His stepfather treated him like his own blood and had a plan for him to follow his career path.
But Liu was determined to chase his own dream. 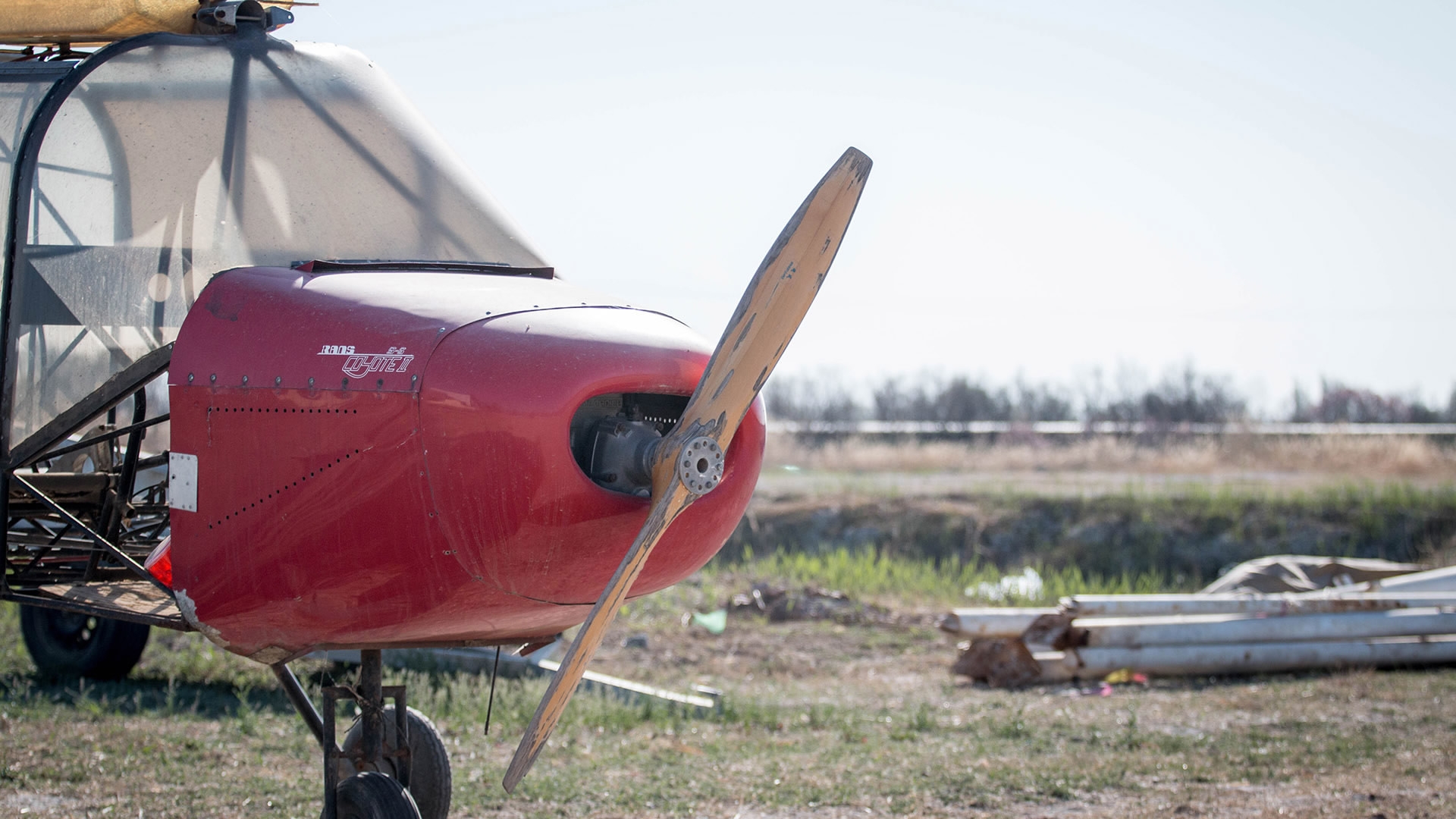 “My stepfather insisted on sending me to medical school so I had to go along. But even when I read those textbooks, all I could think of was building aircraft and becoming a pilot,” he said.
As time went by, his determination convinced his parents. And after years of trial and error, he eventually got a homemade aircraft into the air.
“It started like any other test run,” he remembered. “I was caught completely off guard when I pulled the lever. I struggled to keep it under control but still managed to make a safe landing.”

Liu wasn’t alone in his passion for flying. As he scored his first success, similar stories emerged across China about other self-taught "farmer pilots". By the time Liu mastered the basics of flying, flight schools were open to the public. But taking the next step was not easy.
“At the time there was more than one way to get professional training. But my family didn’t have a lot of money,” Liu explained.
Without professional training, he suffered a number of accidents.
“I remember once, the crosswind fractured one of the wings, and the aircraft started to fall down in a spiral.
“My right knee got wrecked when I made a hard landing. The wound was so deep I could even see my kneecap.” 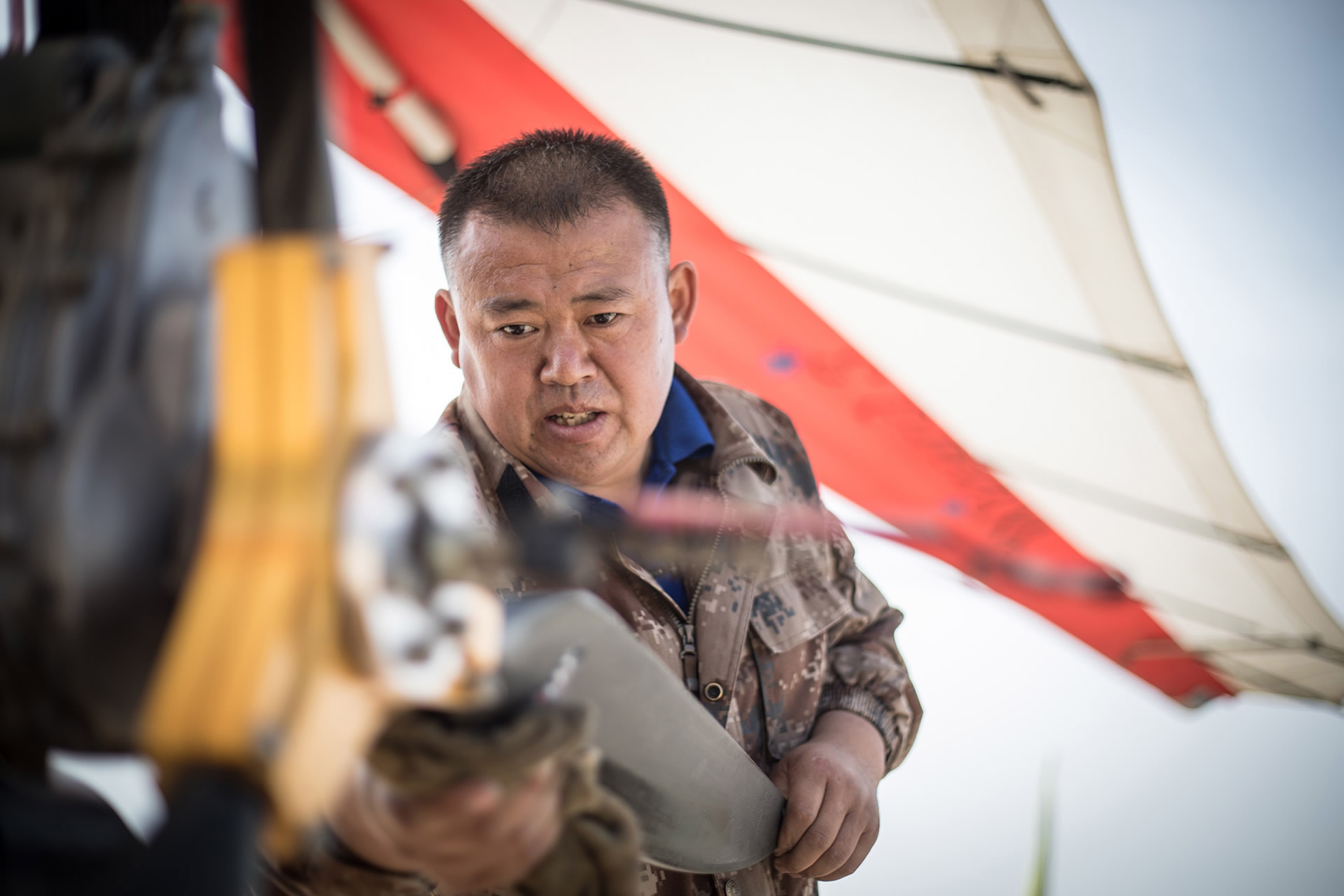 Struggling with injuries and expenses, doubts began to fester. But his parents’ support gave him the strength to carry on.
“When my stepfather agreed to let me fly, he only asked me to promise that I wouldn’t give up, no matter what happened,” Liu said. “He constantly reminded me of that, whenever I wanted to quit. If not for him, I don’t think I’d have ever made it.”
In 2003, Liu finally saved enough for the tuition fee of 35,000 yuan (5,075 US dollars) and became a licensed powered hang glider pilot. A Chinese farmer’s average annual income at the time was 2,622 yuan.
After almost two decades, Liu was finally soaring.

Passing on the dream

Now a seasoned pilot, he has showcased his aerobatic maneuvers across the country as a stunt pilot.
“I’ve made a good living out of flying, and I hope to share my knowledge with more people, especially children,” Liu said. 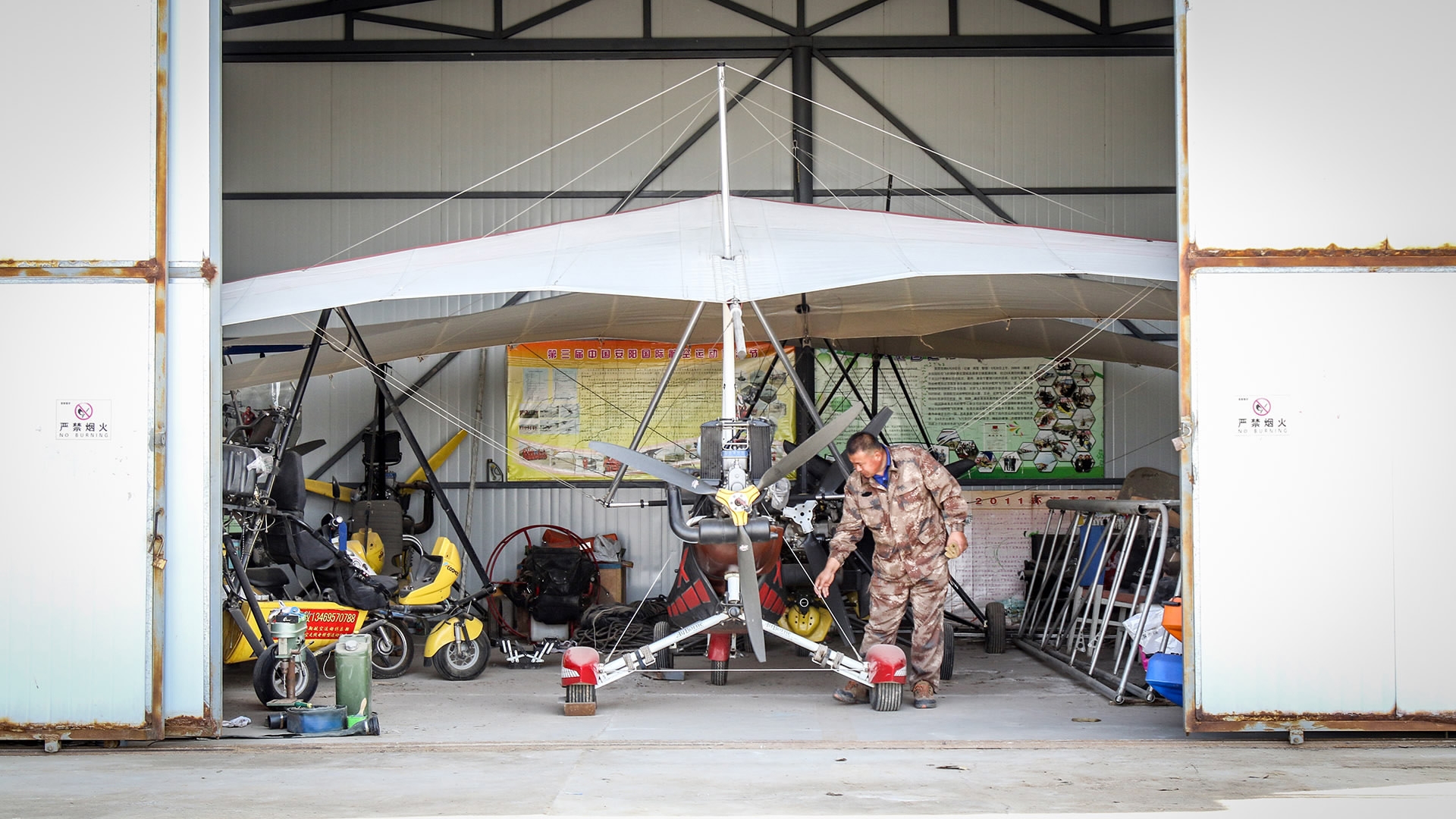 China’s airspace has long been reserved for commercial flights and the military. While nearly 20,000 airports in the US can accommodate general aviation aircraft, the number is just over 300 in China.
But the situation is starting to change as the Chinese government is throwing its weight behind general aviation. The State Council has vowed to build 500 new general aviation airports by 2020, doubling the current number across the country.
Liu seized this opportunity and invested a chunk of his savings into a new flight club in his hometown that offers training for aviation enthusiasts. 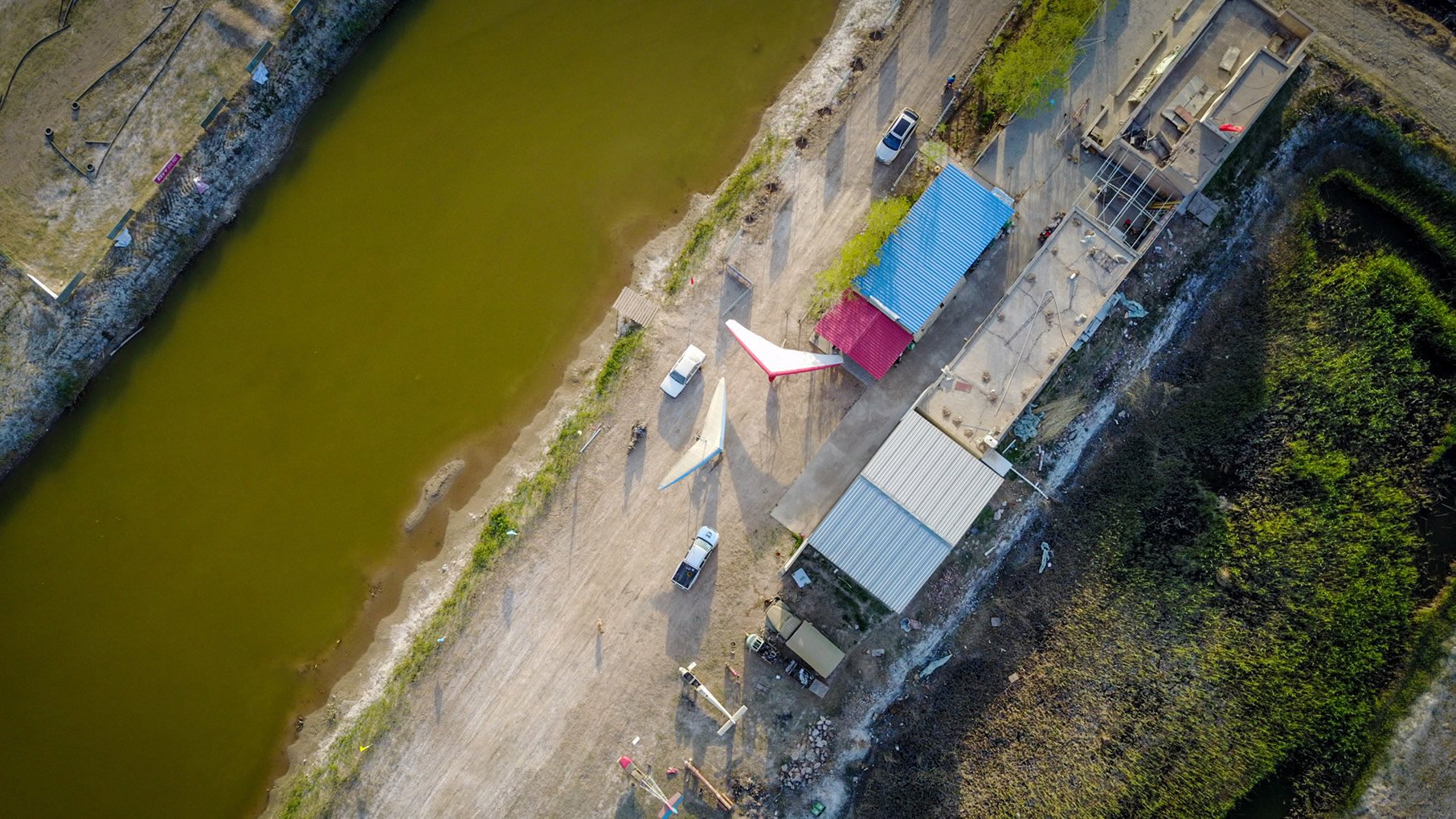 Apart from the warehouse, Liu's facility also includes a runway and a small gallery to show the history of Chinese aviation and his past achievements /CGTN Photo

Apart from the warehouse, Liu's facility also includes a runway and a small gallery to show the history of Chinese aviation and his past achievements /CGTN Photo

Though construction has been approved, he still needs to raise enough money to get the facility operational. But he is optimistic about the future.
“I’m content with just enough money to get by," he said. "As long as I keep doing what I love, there’ll be plenty of chances for me to get rich.”