Analysis: What’s behind the Iran protests and what lies ahead?
By CGTN's Li Linxi 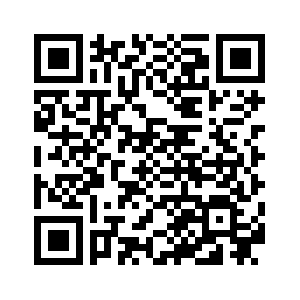 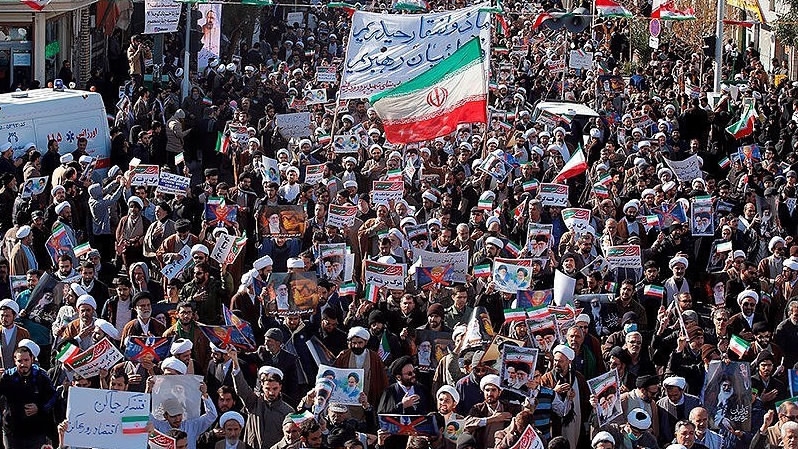 Recent unrest across Iran appears to have simmered down after more than a week of anti-government protests.
The protests, initially staged against the rising cost of living, quickly targeted the government and Supreme Leader Ali Khamenei.
The government estimates about 15,000 people took part in demonstrations, though some media outlets set the number much higher as the movement spread from Iran’s second city, Mashhad, to around 70 provincial-level cities and rural towns.
At least 21 people were killed and thousands imprisoned in the biggest wave of opposition in the country since the Green Revolution when people took to the streets to protest the result of the 2009 presidential election. 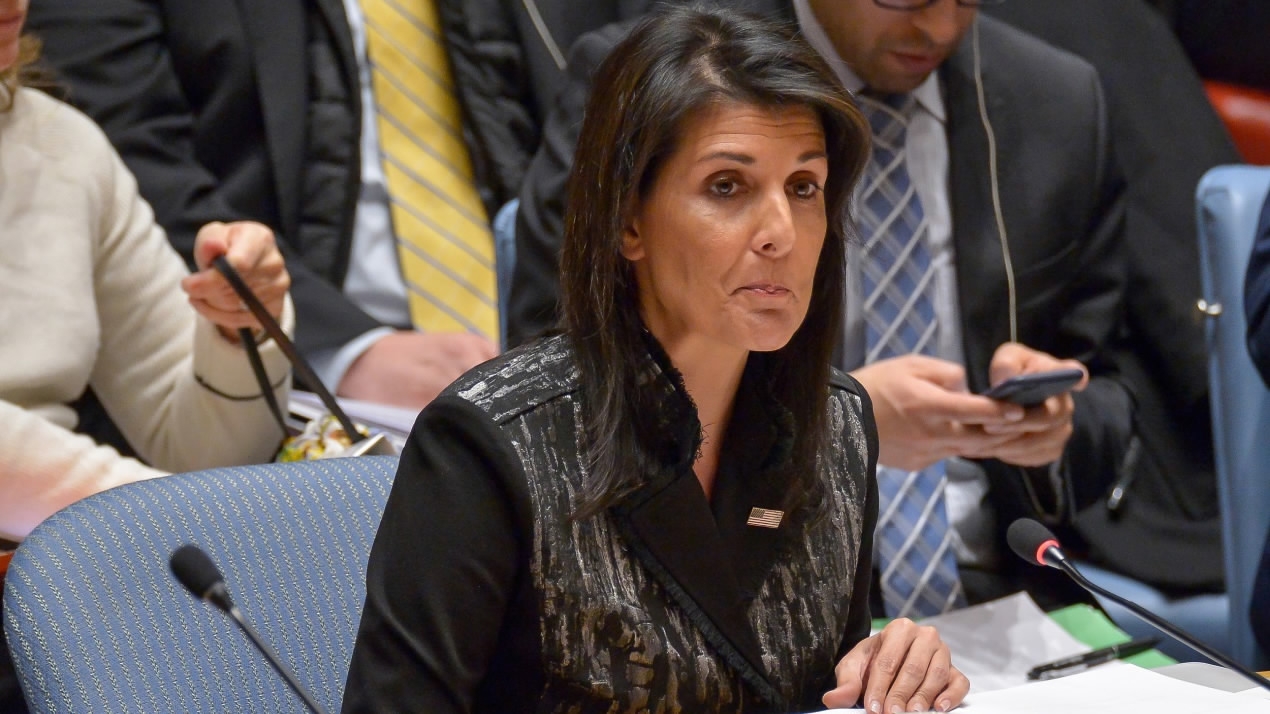 US Ambassador to the UN Nikki Haley speaking at an emergency meeting of the United Nations Security Council regarding ongoing political protests in Iran at the UN Headquarters in New York on January 5, 2018. /VCG Photo

US Ambassador to the UN Nikki Haley speaking at an emergency meeting of the United Nations Security Council regarding ongoing political protests in Iran at the UN Headquarters in New York on January 5, 2018. /VCG Photo

Behind the scenes: The 2015 Nuclear Deal
Iran has variously accused the United States, the United Kingdom, Saudi Arabia and Israel of orchestrating and fueling unrest through social media platforms and the messaging App Telegram, allegations both Washington and Tel Aviv have denied.
On January 6, the US called an emergency session of the UN Security Council (UNSC) to discuss the escalating situation, accusing Tehran of stifling the voices of its people and calling for support for protesters.
However, the call raised little support – not even from some of Washington’s traditional allies – who said the issue shouldn’t be brought to the UNSC which discusses threats to international security.
Russia accused the US of abusing the platform not to protect the interests of the Iranian people but to undermine the 2015 nuclear deal signed between Iran and six powers: the US, France, the UK, Germany, Russia and China. 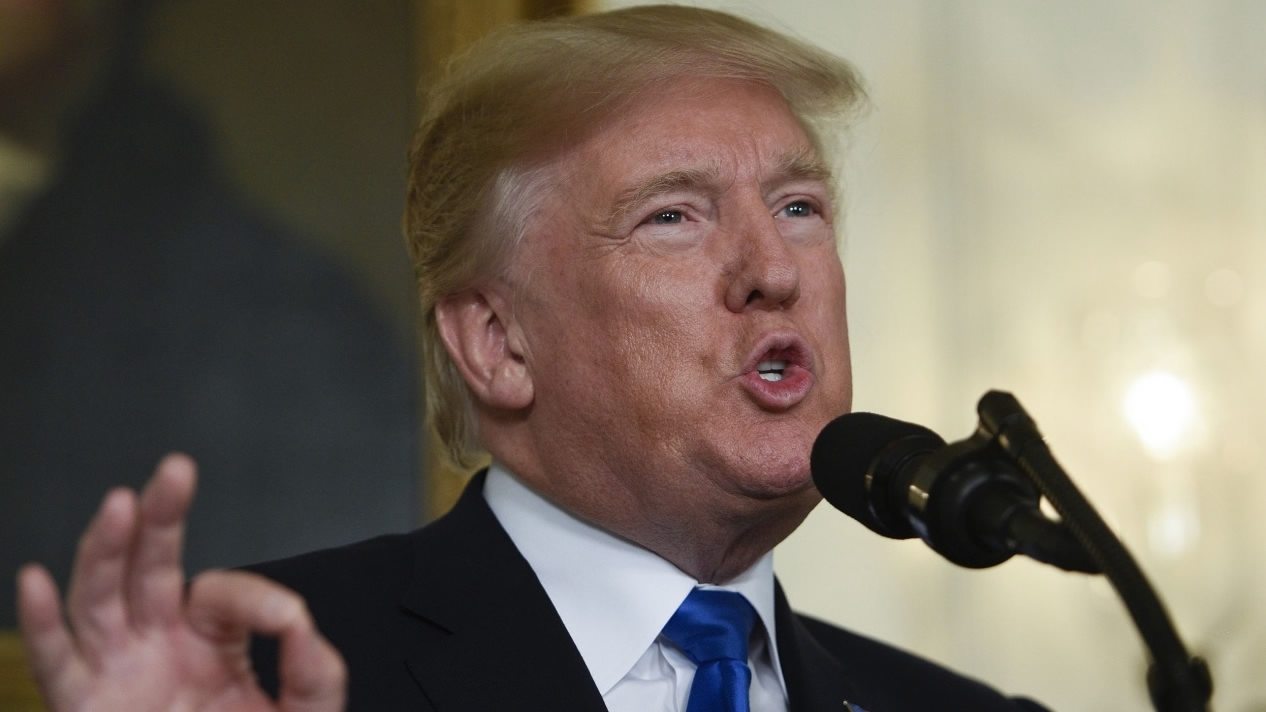 US President Donald Trump makes a statement on his administration's strategy for dealing with Iran, in the Diplomatic Reception Room of the White House on October 13, 2017 in Washington, DC. /Photo by Oliver Contreras

US President Donald Trump makes a statement on his administration's strategy for dealing with Iran, in the Diplomatic Reception Room of the White House on October 13, 2017 in Washington, DC. /Photo by Oliver Contreras

Under the deal, Tehran agreed to halt further development of its nuclear program in exchange for a relaxation of international sanctions.
“It’s important to distinguish between peaceful protests and riots. It was the riots which were instigated by foreign groups that caused bloodshed," Dr. Seyed Mohammad  Marandi from the University of Tehran told CGTN, without offering any evidence to back up the claim.
"Furthermore, the so-called footage of protests used by the Western media was not true. Some of these pictures didn’t even take place in Iran, but in Bahrain; some of them were pro-government rallies, but the Western media twisted them as anti-government protests.”
Marandi went on to say that the US appeared to be using the unrest in Iran as an excuse to rip up the nuclear deal. 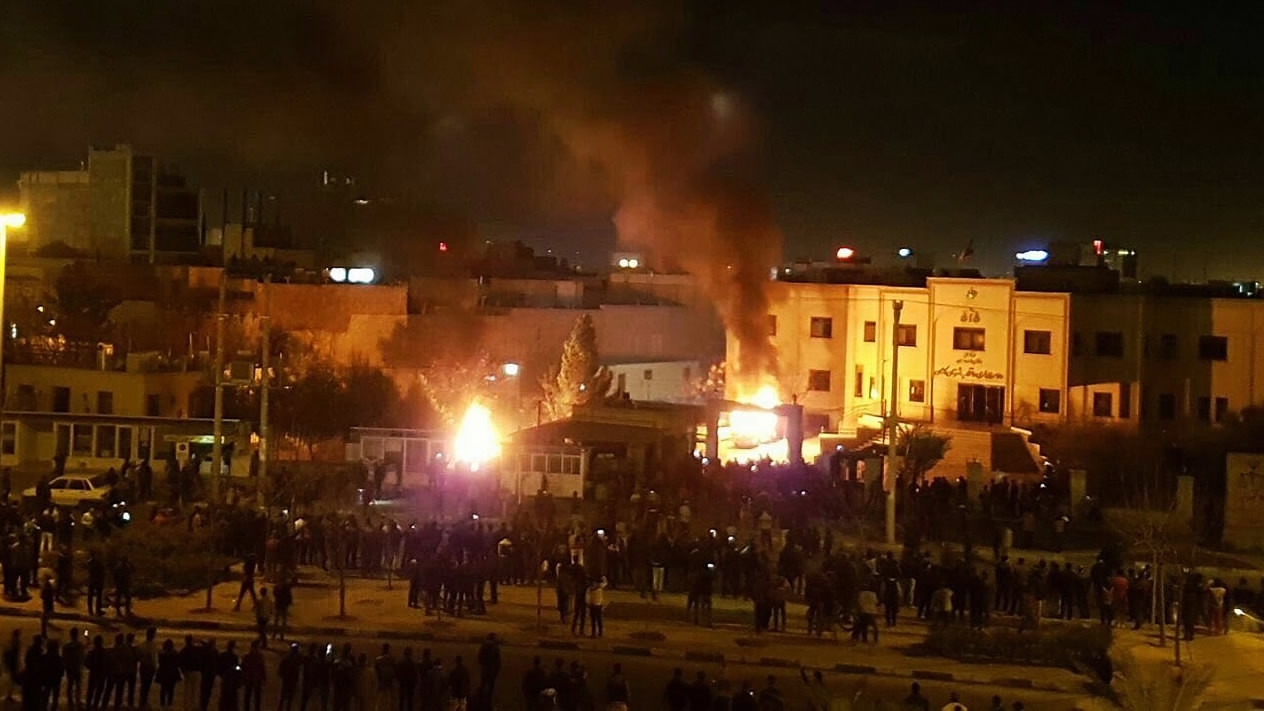 Iranian people protest against high prices and the poor state of the economy in Dorud, Lorestan Province on December 30, 2017.‍ /VCG Photo

Iranian people protest against high prices and the poor state of the economy in Dorud, Lorestan Province on December 30, 2017.‍ /VCG Photo

President Donald Trump is due to decide whether he will continue to “decertify” Iran’s compliance with the deal to Congress, formally known as the Joint Comprehensive Plan of Action (JCPOA) on January 15.
He refused to certify it in October, putting the onus on Congress and other signatories to agree on measures to toughen conditions on Iran - and to make restrictions on the country’s nuclear program permanent.
Trump also said the US could withdraw from the JCPOA anytime if an agreement failed to be reached.
However, Zhou Rong, a senior researcher at the Chongyang Financial Institute of Renmin University, said that the multilateral deal can’t be unilaterally crushed by the US. 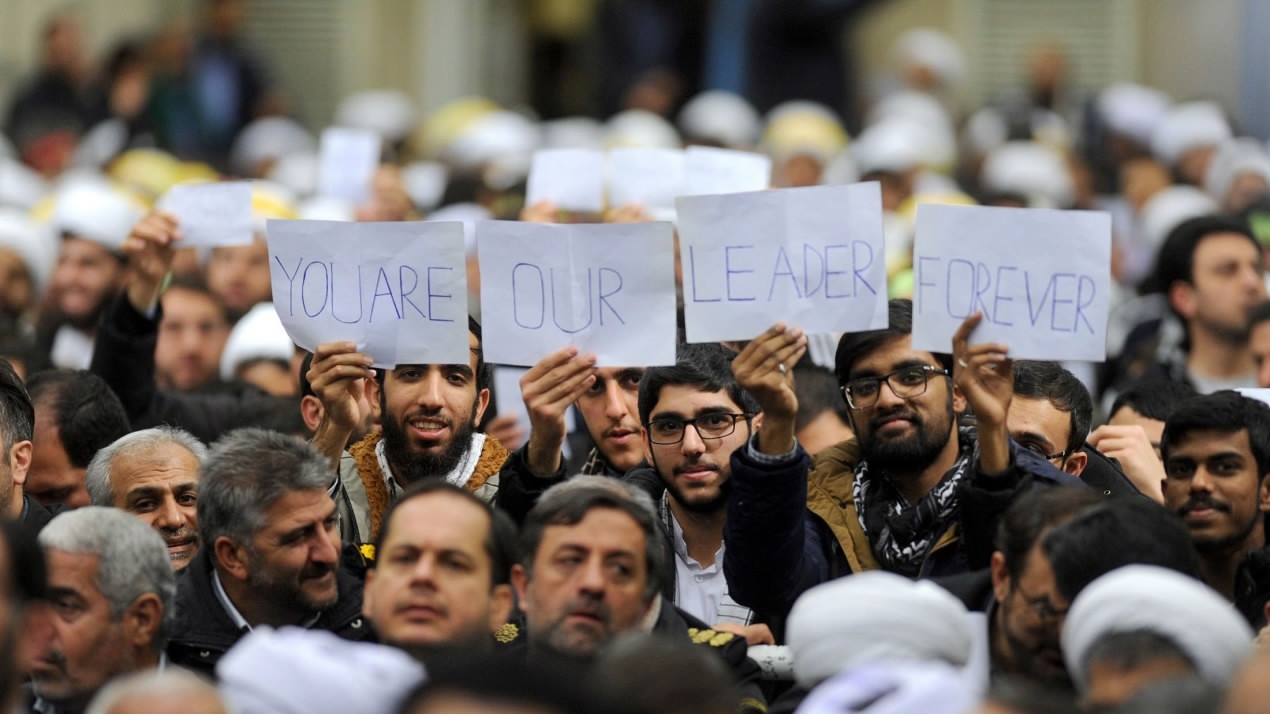 “Both the EU countries and Iran want to maintain the pact and repair ties. The EU countries want to import oil from Iran, while Iran wants to restore its economy. So they don’t support the US move at the UN Security Council,” he said.
Economic reforms, checks on regional military presence
Whatever the US’ intentions - if any - were in the unrest, the movement itself was a major shock to the Iranian authorities.
Slogans of protests varied from calls for a better economy such as “No to high prices”, to criticism of the county’s foreign policies; “Let go of Palestine”, “Not Gaza, not Lebanon, I'd give my life (only) for Iran”. 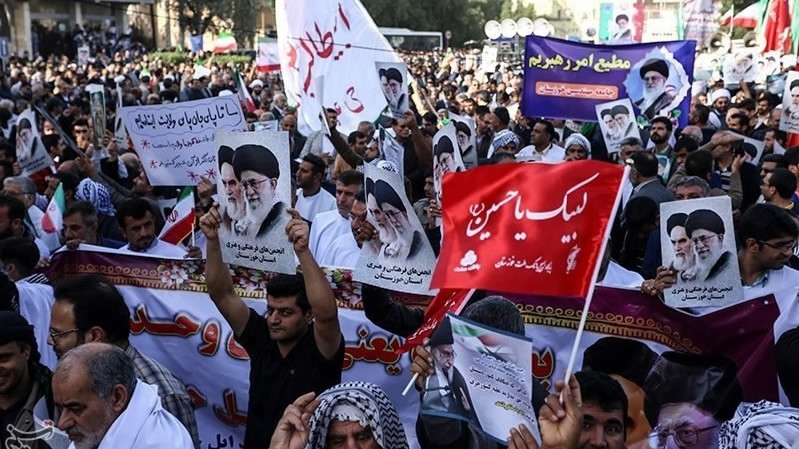 Some even called for a change of administration, chanting “Death to Rouhani, death to the dictator.”
“The initial protests were against economic hardship and not aimed at toppling the government. Some of the protesters can’t take money back from certain financial institutions because of bankruptcy. They wanted the government to solve their problems, but not to topple the regime,” said Marandi.
“However, it’s true that more action needs to be taken by the government to ensure social justice.”
Steps also need to be taken to address unemployment in the country.
Official figures show nearly 90 percent of those arrested were under 25 years old and youth unemployment in particular stood at around 25.93 percent between 2011 and 2017, according to trading economics global macro models and analysts’ expectations, double the official overall unemployment rate of 12.4 percent in the current fiscal year (March, 2016 -2017). 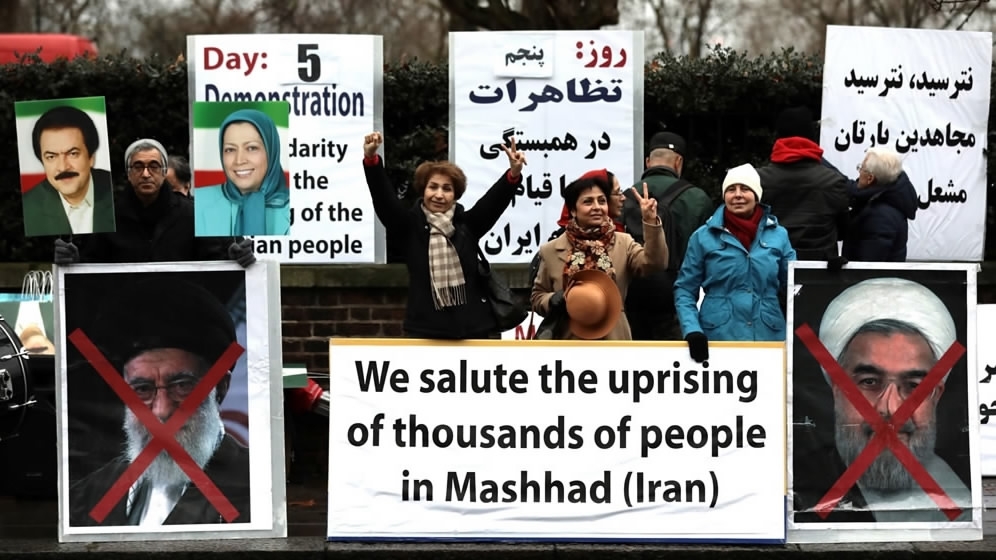 Furthermore, experts also expect change in Iran’s foreign policy for the Middle East region.
“A larger part of the government budget could be allocated to benefit the people, such as subsidies, which will in turn check Iran’s future military presence in the region,” said Zhou Rong.
Zhou thinks one of the reasons why the unrest was quelled so easily this time, is the fact that there is almost no representatives for youngsters to identify with in the administration.
“This is a demonstration without organization or a unified slogan. No one in the regime stands out to speak for the young protesters. Nearly all Iranian parliament members are conservatives, regardless of whether they are hardline, pragmatic or moderate conservatives,” he explained.
“But the movement has shocked Iranian society. It could pave the way for future uprising in the country.”
5601km