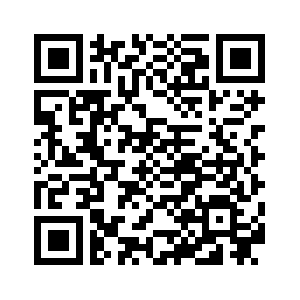 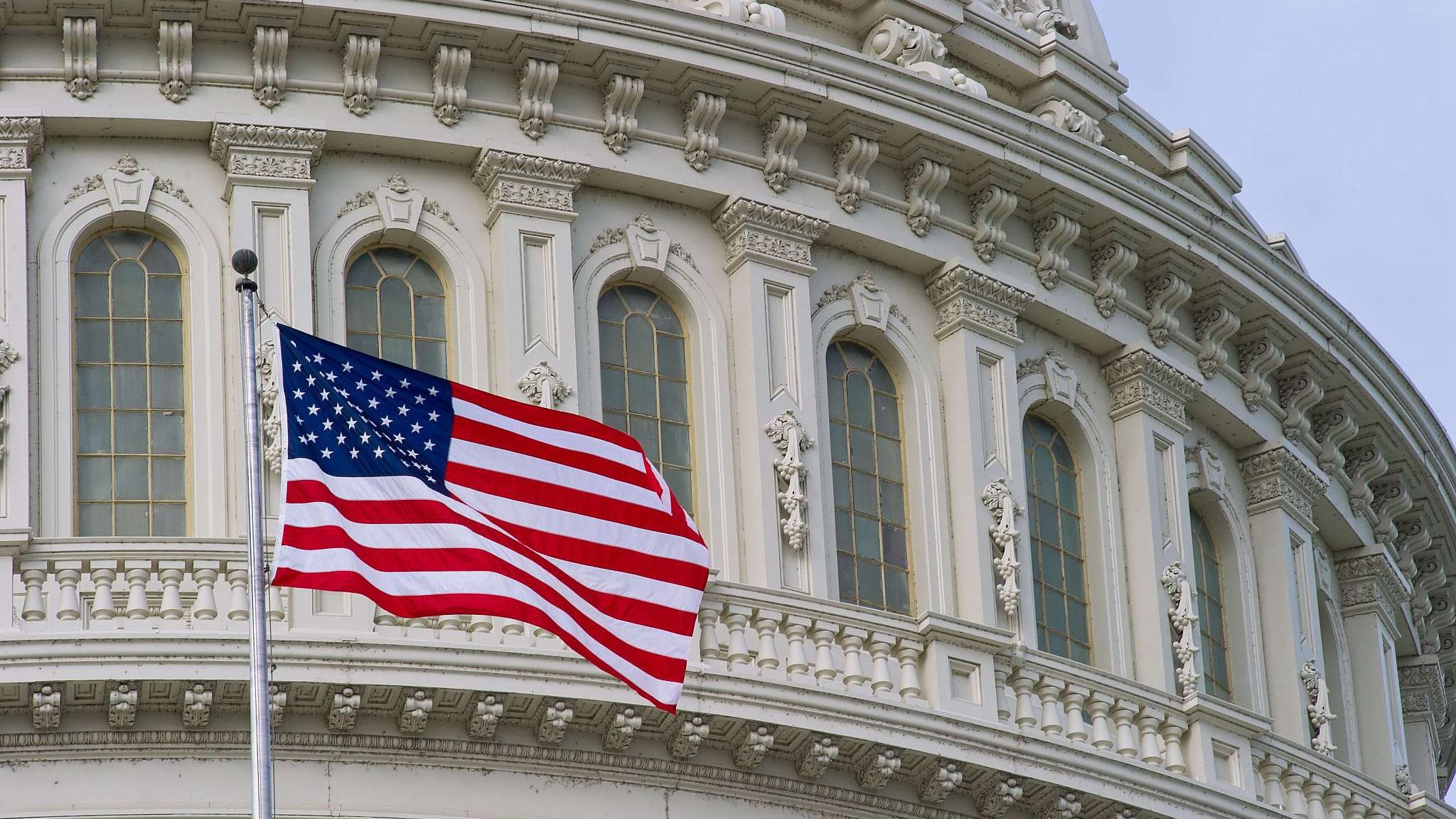 The US President Donald Trump was faced on Friday with the prospect of marking the first anniversary of his inauguration at the head of a broken government after senators failed to pass a stop-gap funding measure.
Although senators are still negotiating, this still marks the first real US government shutdown under a single party controlled White House and Congress. 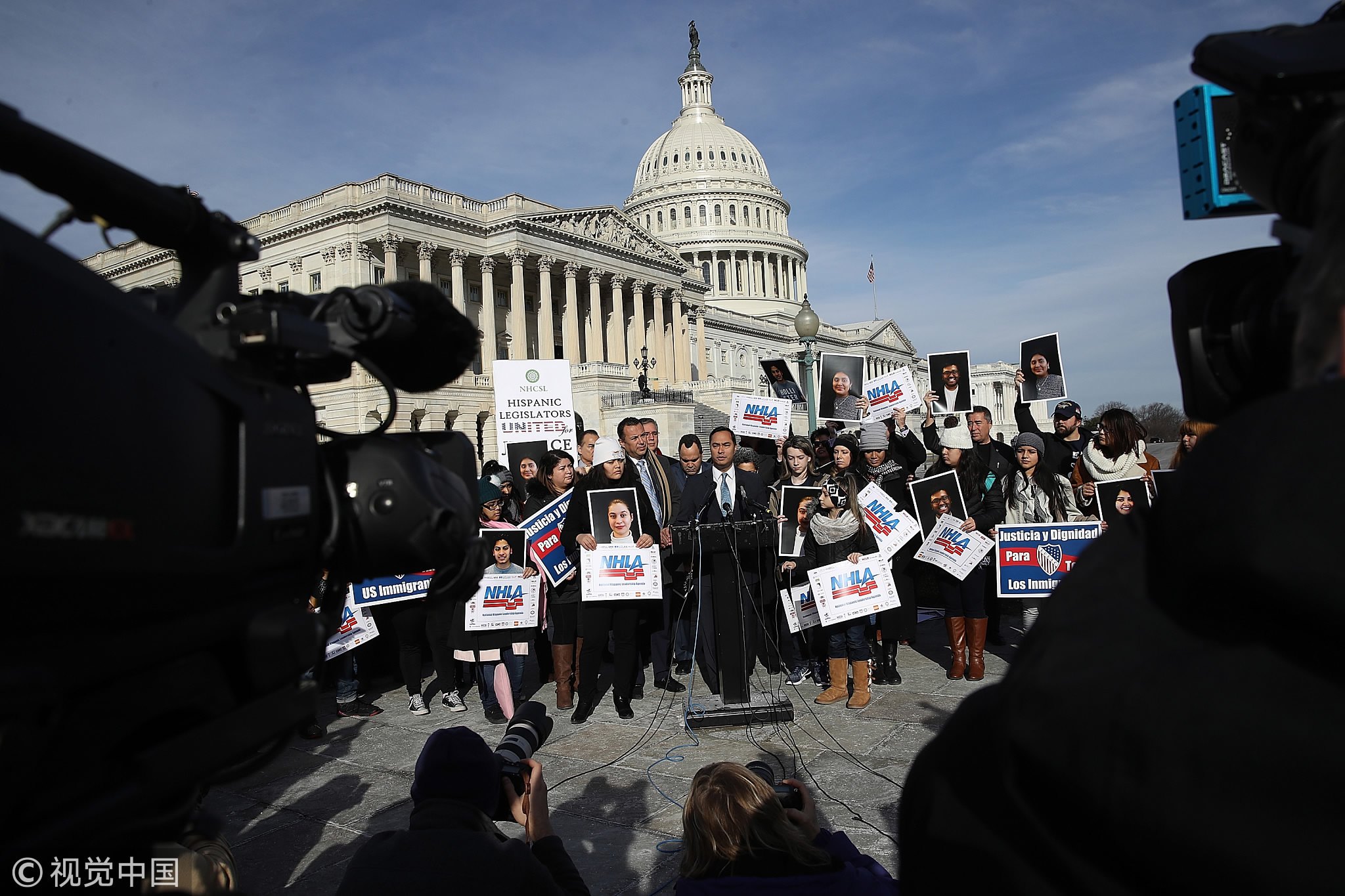 Joaquin Castro (D-TX) speaks during a press conference on immigration reform and a looming government shutdown outside the US Capitol, January 19, 2018 in Washington, DC. /VCG Photo

Joaquin Castro (D-TX) speaks during a press conference on immigration reform and a looming government shutdown outside the US Capitol, January 19, 2018 in Washington, DC. /VCG Photo

How did the 'shutdown' crisis occur?
The government shutdown crisis in the US comes about when the President and Congress fail to pass budget appropriation bills, which federal agencies are funded through.
In the circumstances, the Antideficiency Act requires the federal government begin a shutdown, employees are vulnerable to furlough or temporary unpaid leave. However, emergency services would continue with workers having no pay.
The Congress last year failed to approve a new annual budget for the new fiscal year beginning on October 1, 2017. Since then, lawmakers have approved three temporary spending measures so as to keep the fiscal 2017 budget in place.
Saturday's Senate vote aims to pass the fourth short-term budget measure to keep the federal government for another four weeks until February 16.
'Yesterday once more'
Government shutdown is not new for the US. The US government has experienced it several times. 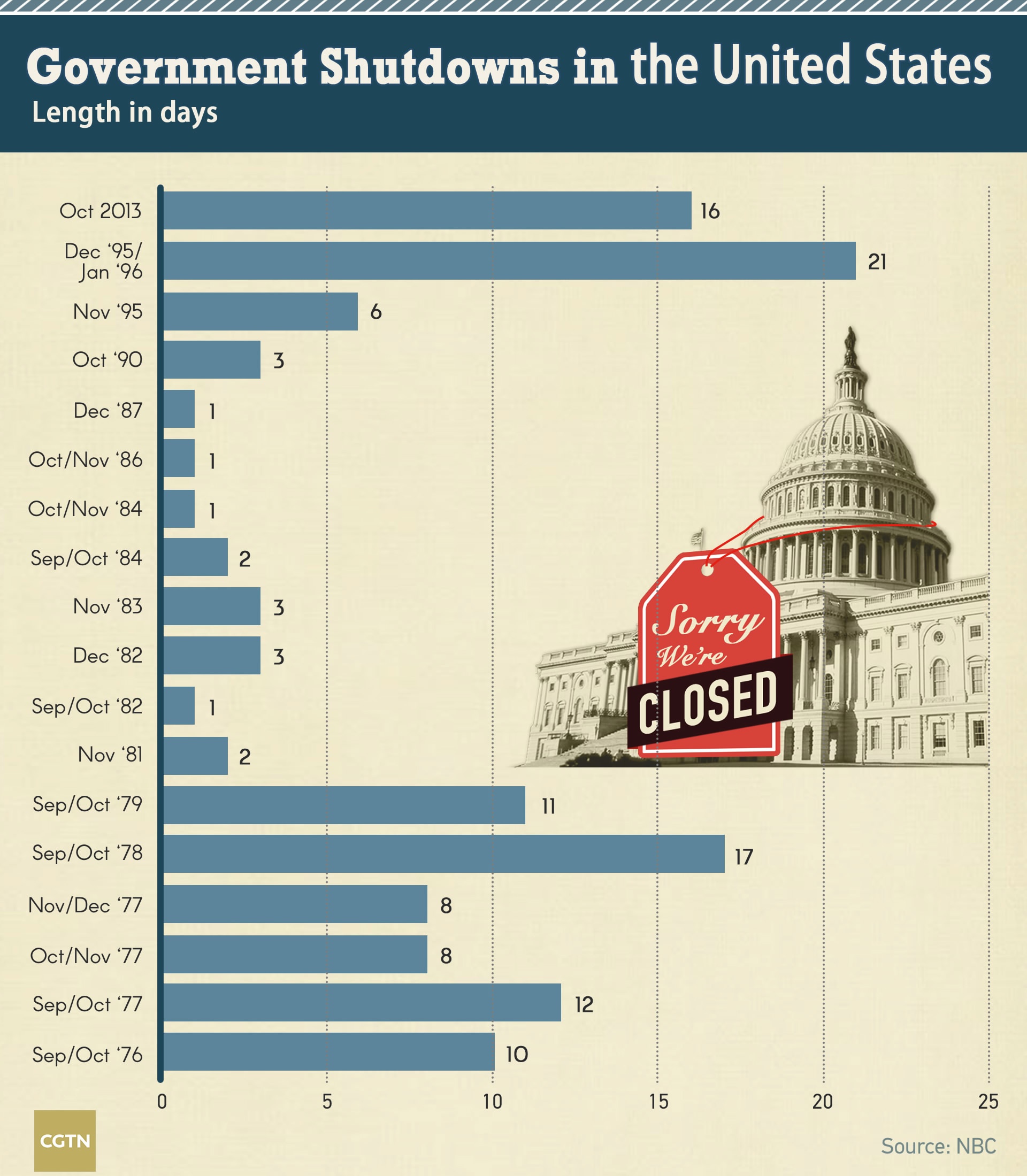 The latest one occurred during October 1-16 in 2013. The deadlock centralized on Patient Protection and Affordable Care Act (Obamacare). The Republicans who occupy the majority in House required pass the bill with conditions like suspending funding to Obamacare or delay its implementation.
Before that there were two shutdowns under Bill Clinton during 1995 to 1996 for a total of 27 days.
Another longer shutdown was in 1978 under Jimmy Carter, which last for 18 days.
Different deadlock
Both Democrats and Republicans said they should not be blamed for this shutdown crisis.
The Republicans blamed Democrats for withholding their needed votes in the Senate in order to press for a resolution in the immigration debate while the Democrats argued the Republicans control both Congress and White House – it should be Republicans' fault to fail to keep the government open.
Experts said the current standoff is different compared to 2013's shutdown. The Republican in 2013 required the Democrats to agree to delay Obamacare for at least a year, which begs the question if Obama's signature achievement would take effect. 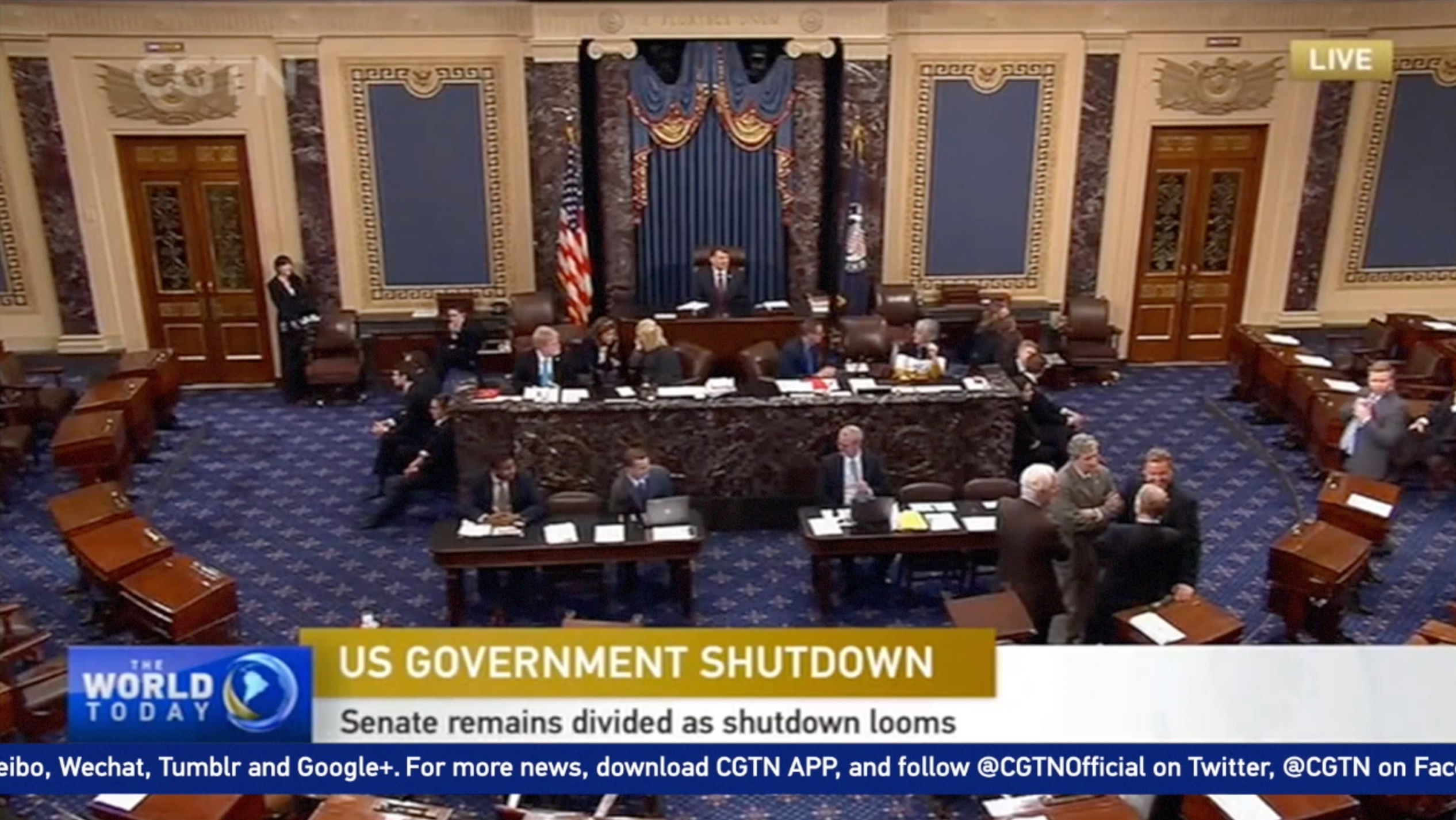 The row began with Trump's proposal to repel the cuts that Republicans forced Democrats to accept in 2011 to provide around 550 billion US dollars more for the Pentagon. The White House then demanded to cut non defense spending in order to offset the increase.
However, Trump's republicans in Congress object to president's requested cuts. Instead, they even negotiated with the Democrats to increase nondefense budget.
In order to pass the budget, it required 60 votes in Senate but Republicans only have 51 seats in the 100-member chamber. Some Republicans already stated they will vote no. So the Republicans did need Democratic votes to keep.
The Democrats made two major demands: Extend the Children's Health Insurance Program (CHIP) and continue protraction from deportation for the 700,000 undocumented immigrants so called "Dreamers" in Obama's Deferred Action for Childhood Arrivals program. 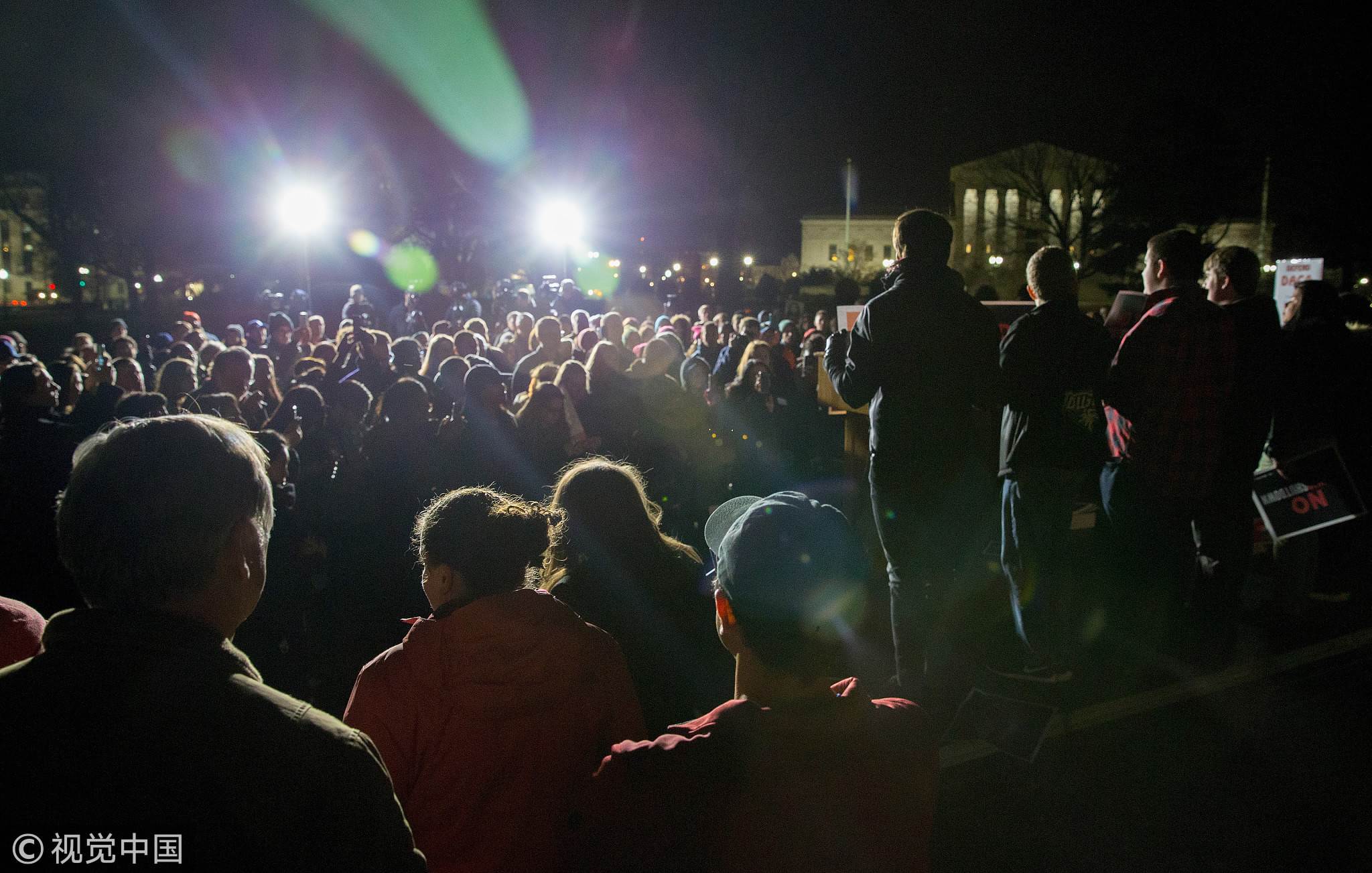 DACA supporters gather at a rally outside the US Capitol on January 19, 2018 in Washington, DC. /VCG Photo

DACA supporters gather at a rally outside the US Capitol on January 19, 2018 in Washington, DC. /VCG Photo

Trump announced the end of the DACA Program last September, but waited until March for a replacement. As for CHIP, the bipartisan compromise has lasted in Capitol Hill for two-decades, Trump is now opposing it.
Polls have showed that the public strongly support both programs.
Another sticking point is Trump's idea of funding new border controls, including the US-Mexico wall.
Analysts said the current crisis reflects core differences between the two parties. Republicans are more homogeneous as it overwhelmingly relied on white voters while the Democrats are more diverse and are able to make compromise.
What's next?
During 2013's shutdown, around 800,000 federal employees were indefinitely furloughed while another 1.3 million were asked to report to work without payments.
However, those essential services and emergency services would still run including national security, post, air traffic control, inpatient medical services, emergency outpatient medicine, disaster assistance, prisons, taxation and electricity production. 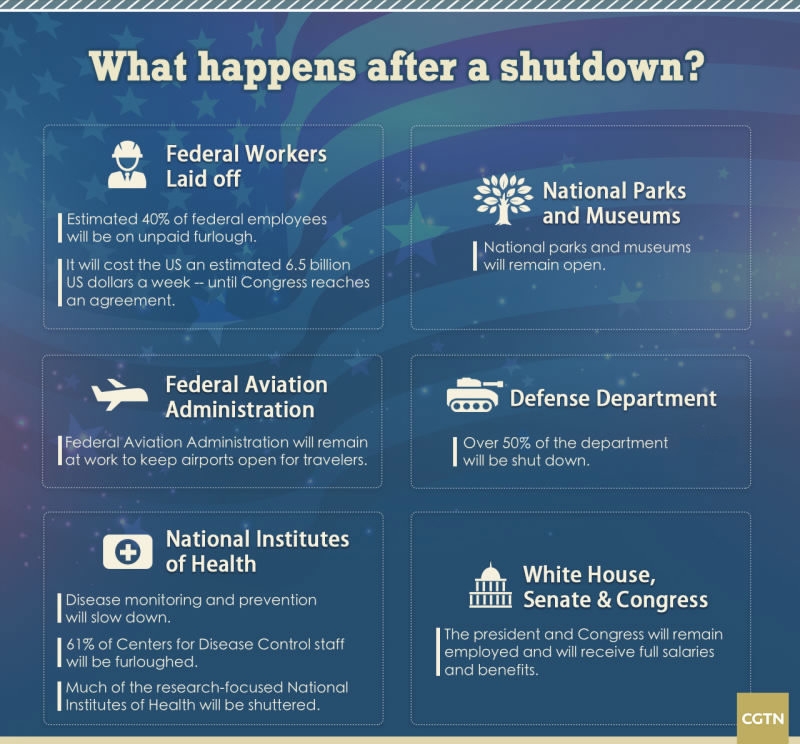 According to the US Defense Secretary Jim Mattis, over 50 percent of his department would stop to work and he recognized it could be "a huge morale impact."
Meanwhile, the Visa and passport processing could also be delayed.
Commenters also said the situation where the Republicans control both Congress and the presidency but still fail to fund the government, could create a problem for Republicans' midterm elections in November.
11160km