The Nancy Pelosi Moment – Her comeback to kudos
By Wang Xiaonan 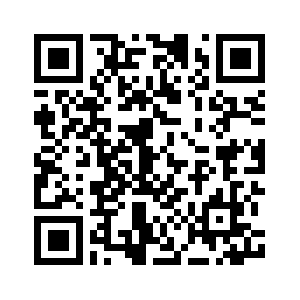 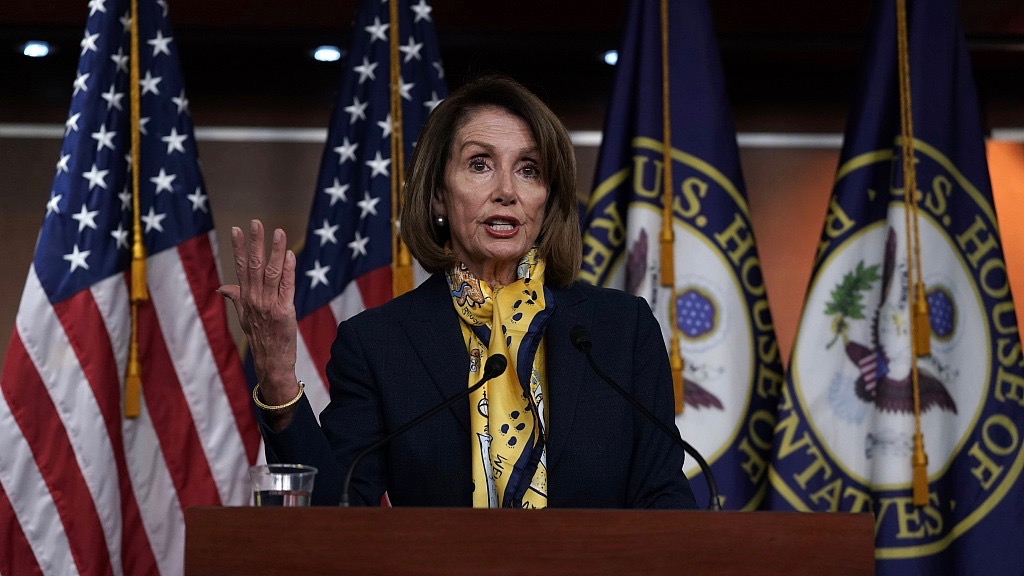 In Washington, the month-long fight between two septuagenarians over wall bucks came to an abrupt halt on Friday when Donald Trump signed a bill to end the longest government shutdown in American history, though temporarily for three weeks.
Behind the wayward president's surrender is a Democrat-controlled House of Representatives led by Nancy Pelosi – an elegant, energetic 78-year-old woman.
“She'll cut your head off and you won't even know you're bleeding. No one ever won betting against Nancy Pelosi,” filmmaker Alexandra Pelosi said of her mother on the eve of the latter's reelection as Speaker of the U.S. House of Representatives. Her daughter was right on the money. Nancy won her first round against 73-year-old Donald. 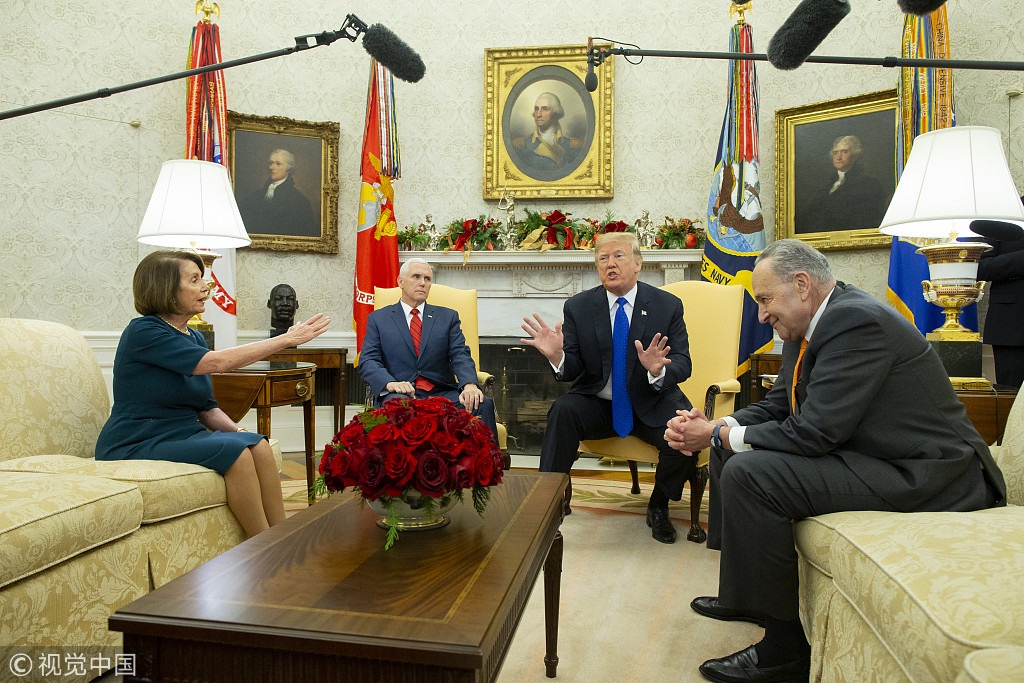 Over the past month, Nancy Pelosi has dominated headlines since her emergence as Trump's biggest adversary. She's currently the most powerful woman on the U.S. political stage and second in the line of presidential succession.
It's not the first time that Pelosi shattered the marble ceiling in the Old Boys' Club on Capitol Hill. Back in 2007, she made history by becoming the country's first female Speaker of the House. She held the title for four years till 2011, when the Democratic Party lost control of the House in the 2010 mid-terms. She had been the House Minority Leader since then.
Fast into 2019, Pelosi regained her star power by becoming the first person to return to the throne of the Speaker after losing it. Right now, she is the only woman in that position. 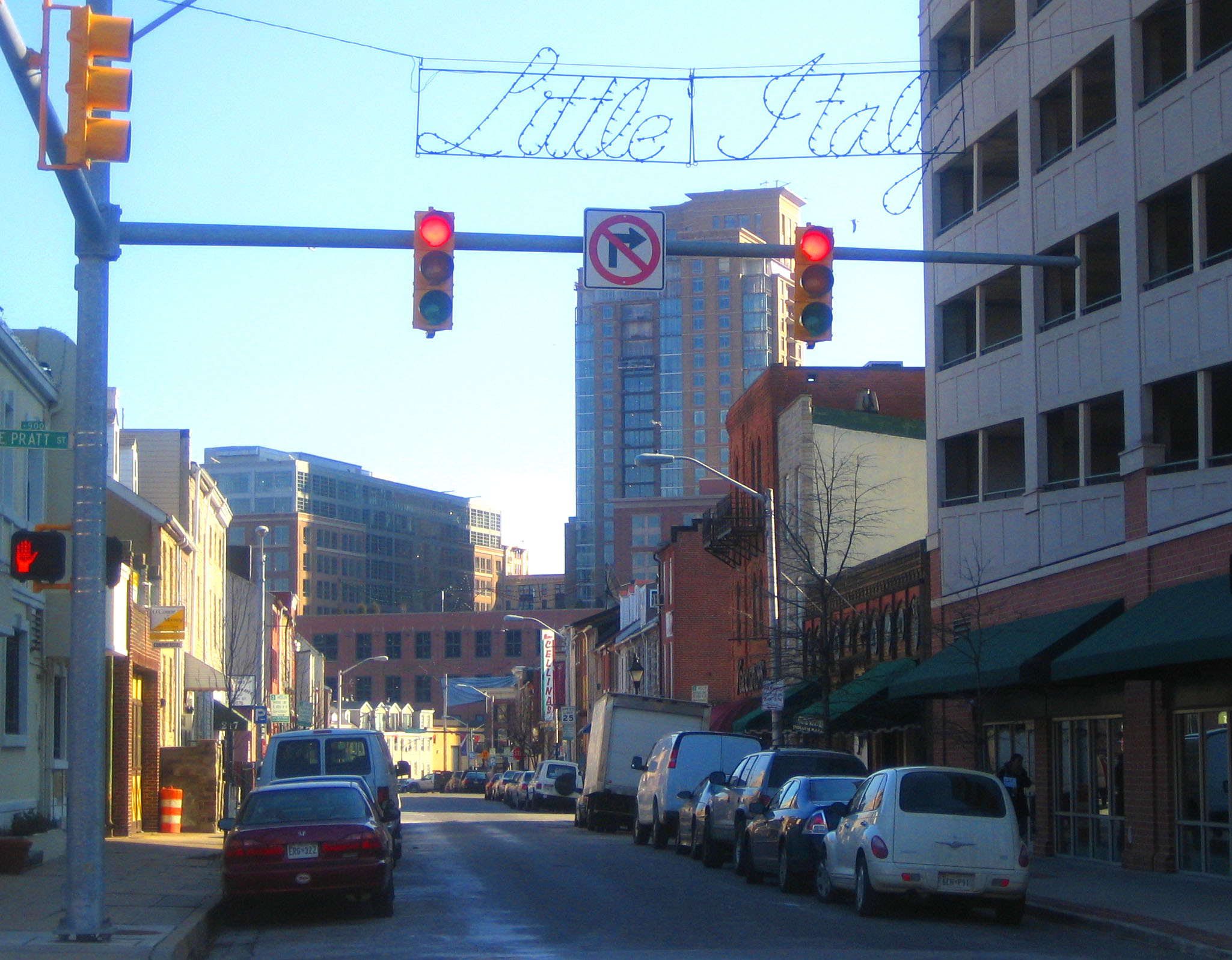 Pelosi was born Nancy Patricia D'Alesandro in March 1940 to a family with Italian roots, as the youngest and only girl among six children. Her father Thomas Ludwig John D'Alesandro Jr. was the son of Italian immigrants and her mother was from the southern Italian city of Campobasso.
The family lived in a house in Little Italy – a humble, working-class community near the major industrial harbor of Baltimore. Mr. D'Alesandro, who rose to become the city's first Italian-American mayor from an insurance and property broker, never left the neighborhood. ''I'm a Paisano. These are my people and this is where I belong,'' he said. Little Italy is home to devoted Democrats in the traditionally blue Maryland.
Under Mayor D'Alesandro, Baltimore built 87 schools with new facilities for black children who had previously attended segregated buildings. Brought up in an environment respecting diversity, Nancy gained the instinct to oppose a U.S.-Mexico border wall touted by old, white male Republicans. 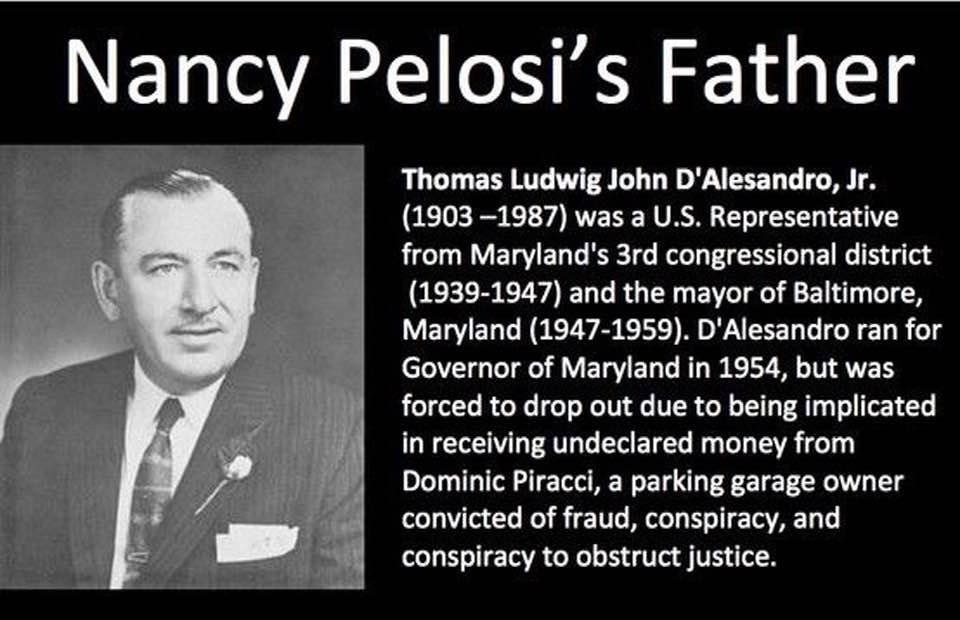 Her father entered politics at a young age of 24 in 1927 as a member of Maryland State Legislature. He was elected to Congress one year before she was born and served until he resigned in 1947; then he became the mayor of Baltimore when she was seven. He won campaigns for the City Council, the City Hall and the House of Representatives in the following years.
D'Alesandro was a favorite of the then-Washington powerbrokers. He was cordially called ''Tommy'' by presidents Franklin D. Roosevelt, Harry S. Truman, and John F. Kennedy. D'Alesandro was appointed by Kennedy to the Federal Renegotiation Board in 1961.
Pelosi's namesake mother Nancy D'Alesandro was a warmhearted woman always ready to help. “A worker, she worked people,” said her son D'Alesandro III who served a single term as mayor of Baltimore in the late 1960s. To Pelosi's family, public service is a noble calling.
Pelosi learned the art of politics from her legendary father. She managed her father's book of people who did or owed him favors and worked hard on his campaign. At a tender age of 12, she attended the Democratic National Convention for the first time. And at 20, she partied with Kennedy at his inaugural ball. 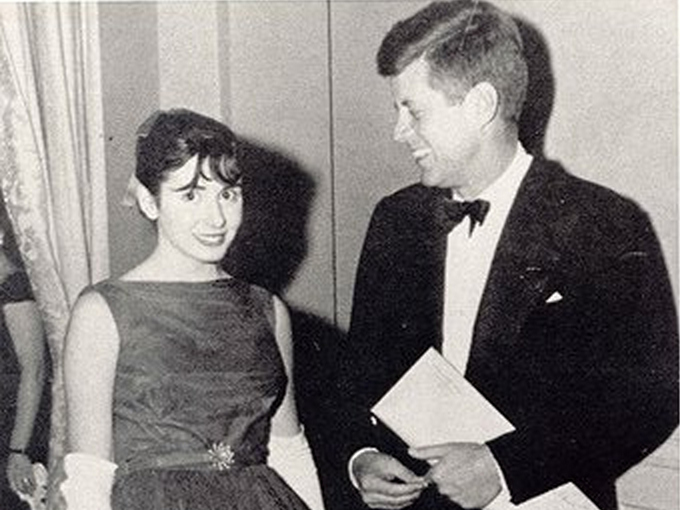 A perfect housewife for 25 years

But Pelosi chose a path that deviated from the political spotlight – a traditional path for young women in the mid-1900s. Upon graduation from Trinity Washington University at the age of 23, she married Paul Pelosi – then a Georgetown University graduate. They moved to New York City where Paul worked in the banking industry. She gave birth to five children within six years and her husband attended Harvard Business School while making money for the family. In 1969, they moved to Paul's hometown of San Francisco.
There, Paul set up a real estate and venture capital investment firm. Pelosi Holdings invested in swanky properties across California. In addition, the Pelosis invested in a litany of hi-tech companies including Apple, Microsoft, AT&T and Facebook.
Nancy was an excellent homemaker – bringing up five children without a babysitter, cooking for the whole family while volunteering to hold fundraising parties for Democrats during election seasons.
She became acquainted with the Burtons – the most important Congressman in the 1960s and 1970s Phil Burton and his wife Sala. They appreciated her stamina as a hostess for fundraising parties and more of her commitment to liberal and progressive values. Through the Burtons, Nancy came to know a lot more influential politicians. When Sala was dying of cancer in 1987, Pelosi agreed to run for Congress since her youngest girl was in high school. That year, she was 47. 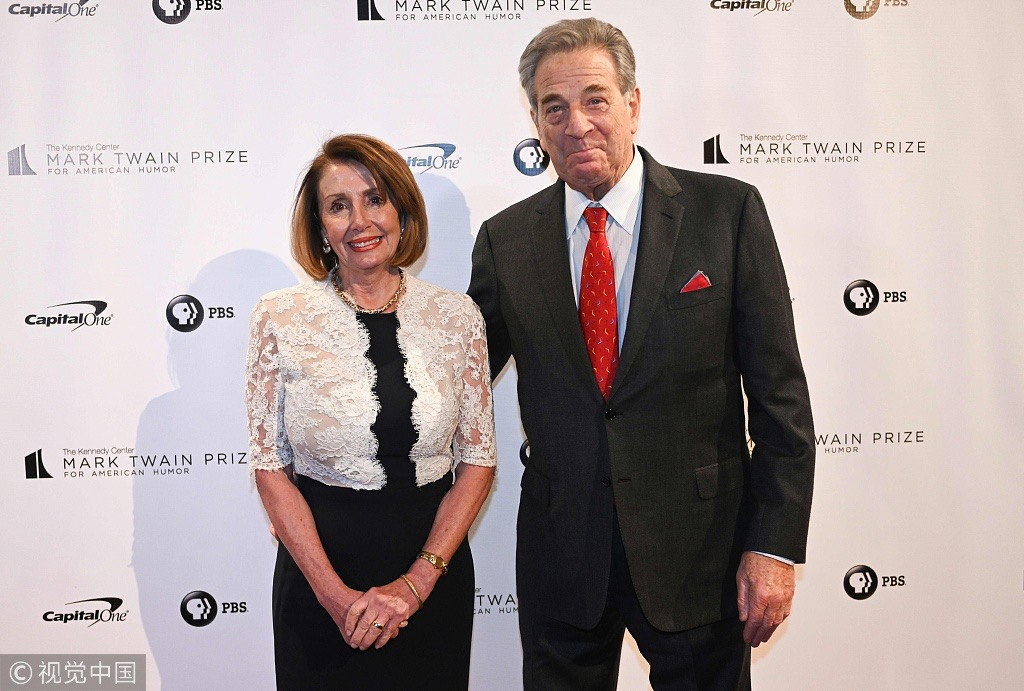 “Public policy was an extension of taking care of children,” she said. In her mind, serving Congress was not too different from making a home.
Though Pelosi made her official foray into politics at the late age of 47, she was never a stranger as she was raised in a household rife with politics. Pelosi went through the rough and tumble of California's political scene, working for the presidential campaign of the state governor Jerry Brown in 1976, and was the state chair of the Democratic Party by 1981. Her instincts for organizing the grassroots and building politically beneficial relationships were honed by the time she decided to run for the congressional seat in 1987.
Pelosi's politics are undeniably liberal, as she herself has stated with conviction her support for gay rights, legalized abortion and gun control legislation. She had even opposed former U.S. president George W. Bush's resolution to wage the Gulf War. This has earned her the moniker “latte Democrat” from some Republicans, who poke fun at her unabashedly progressive views on women's reproductive rights and the environment. 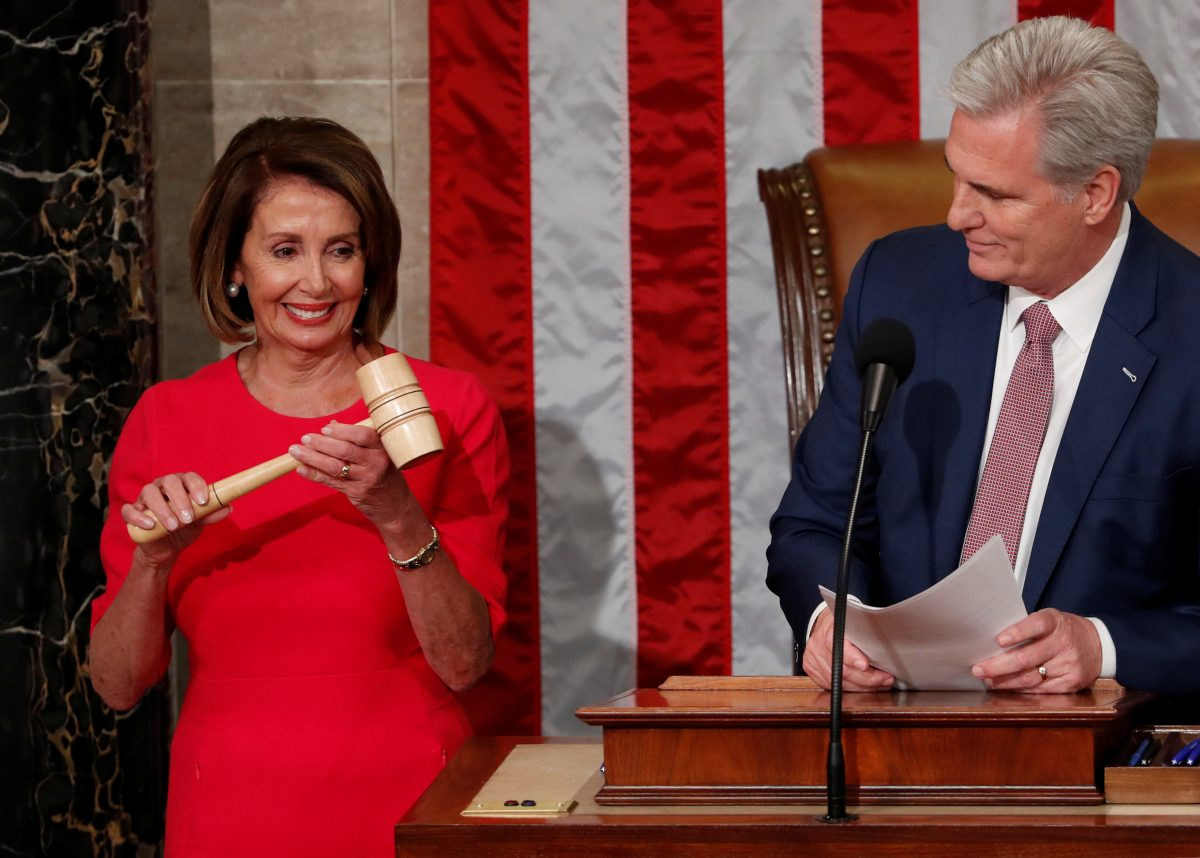 Nancy Pelosi is handed the gavel by the House Republican leader Kevin McCarthy after being elected as the speaker of the U.S. House of Representatives on January 3, 2019. /Reuters

Nancy Pelosi is handed the gavel by the House Republican leader Kevin McCarthy after being elected as the speaker of the U.S. House of Representatives on January 3, 2019. /Reuters

Even as Pelosi faced criticism for wearing her beliefs on her sleeve, she was the favorite in her party. By the time she became the first female speaker of the House in 2007, she had already near universal support from the Democrats. She lost the position during the midterms in 2010 and experienced the wavering of Democrats' faith when Trump and his Grand Old Party swept both chambers.
But she has taken up the gavel once again as Speaker, this time in a divided Congress that has placed her in a much more adversarial position against Trump, who has proven to be her antithesis on issues such as DACA.
But will the savvy Congresswoman handle such a Washington? It's no surprise to learn that one of her favorite hobbies is completing the New York Times' daily crossword puzzle, which is known for being extremely challenging. She has brought her curiosity, wisdom, and perseverance to the parlor game of Washington, and is already becoming a legend on the Hill. "Mr. President, please don't characterize the strength that I bring." The cool, stylish granny put on her sunnies and flashed her iconic smile.