Can Maduro turn adversity into opportunity as second term begins?
By Le Tian 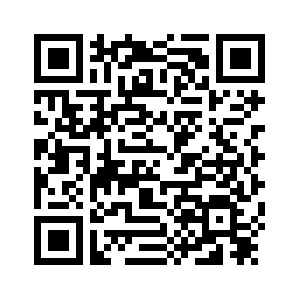 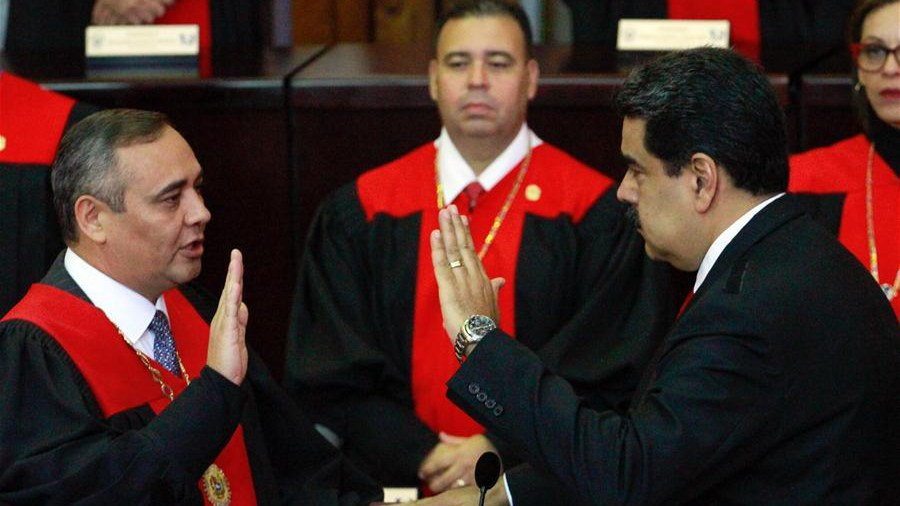 Venezuelan President Nicolas Maduro was sworn in before the Supreme Court of Justice (TSJ) to begin a new six-year term on Thursday, despite massive challenges at home and international hostility.
"I swear on behalf of the people of Venezuela ... I swear on my life," Maduro said solemnly, adding that he would fulfill and enforce all constitutional mandates to "seek to defend the independence and absolute integrity of the country."
He recalled that the May 20, 2018 elections were done "in spite of an international conspiracy to boycott the elections and delegitimize the institutional processes."
The 55-year-old Maduro was re-elected in May last year with 67.84 percent of the votes. 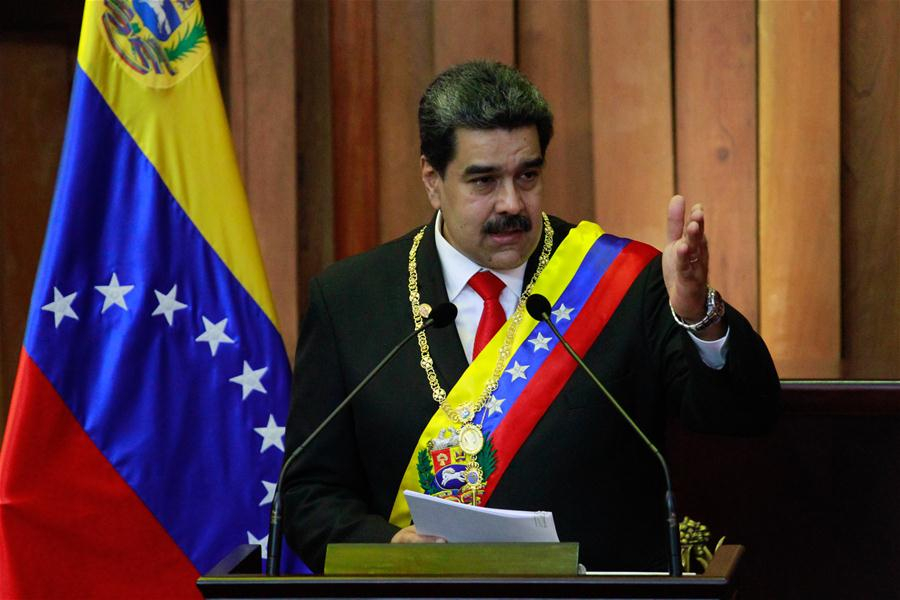 Who comes? Who doesn't?

The ceremony, which Maduro regarded as "a peace step for the country," included the presence of all the domestic public leaders, except those from the National Assembly, the majority of which are from the opposition.
Venezuela's opposition parties won the majority during the 2015's assembly election with Maduro's party only won 55 out of 167 seats.
The opposition-controlled National Assembly rejected to recognize the last year's election results while Maduro has dismissed claims of the opposition.
"The opposition must leave us alone to govern," he said.
Those attending also included Bolivian President Evo Morales, Cuban President Miguel Diaz-Canel, Nicaraguan President Daniel Ortega and El Salvador's President Salvador Sanchez Ceren as well as representatives of Russia, China and Turkey. Mexico sent a low-level diplomat. 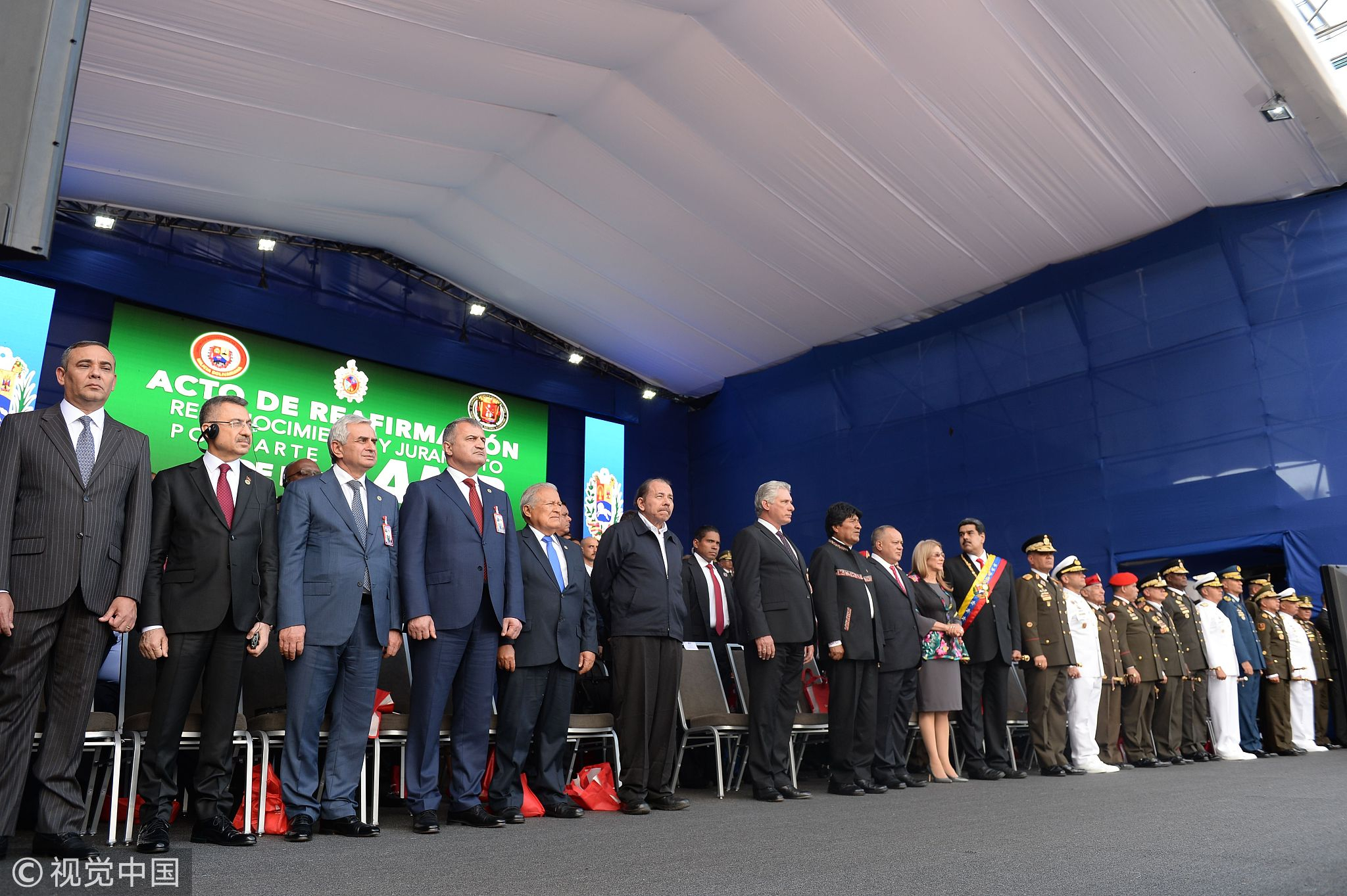 President Nicolas Maduro (wearing sash), is pictured with guests and government and military authorities during the ceremony of recognition of the Bolivarian National Armed Forces (FANB), at the Fuerte Tiuna Military Complex, in Caracas, January 10, 2019. /VCG Photo

President Nicolas Maduro (wearing sash), is pictured with guests and government and military authorities during the ceremony of recognition of the Bolivarian National Armed Forces (FANB), at the Fuerte Tiuna Military Complex, in Caracas, January 10, 2019. /VCG Photo

As this year marks the 45th anniversary of the establishment of diplomatic ties between China and Venezuela, Chinese President Xi Jinping's special envoy Han Changfu hoped the two sides could take this opportunity to further enrich the connotation of the comprehensive strategic partnership between the two countries and bring more benefits to the two peoples.
Thirteen members of the Lima Group, which made up of 14 mostly Latin American countries including Brazil, Argentina and Colombia, last week issued a joint statement claiming they won't recognize new Maduro government.
Maduro used his speech to call for a summit of Latin American leaders to discuss "with an open agenda all the issues that need to be discussed, face to face!"
Lima Group member Paraguay announced immediately after the ceremony that it was breaking off diplomatic relations with Venezuela.
The U.S., EU also Canada all claimed that they won't recognize Maduro's inauguration and they didn't send any diplomats to the ceremony.

For Maduro, once the scene of political chaos was overcome, the economic battle and in particular the fight against inflation were seen as the main national tasks for his new term.
Venezuela is one of the world's largest oil producers and holds the presidency of oil cartel OPEC until 2025. 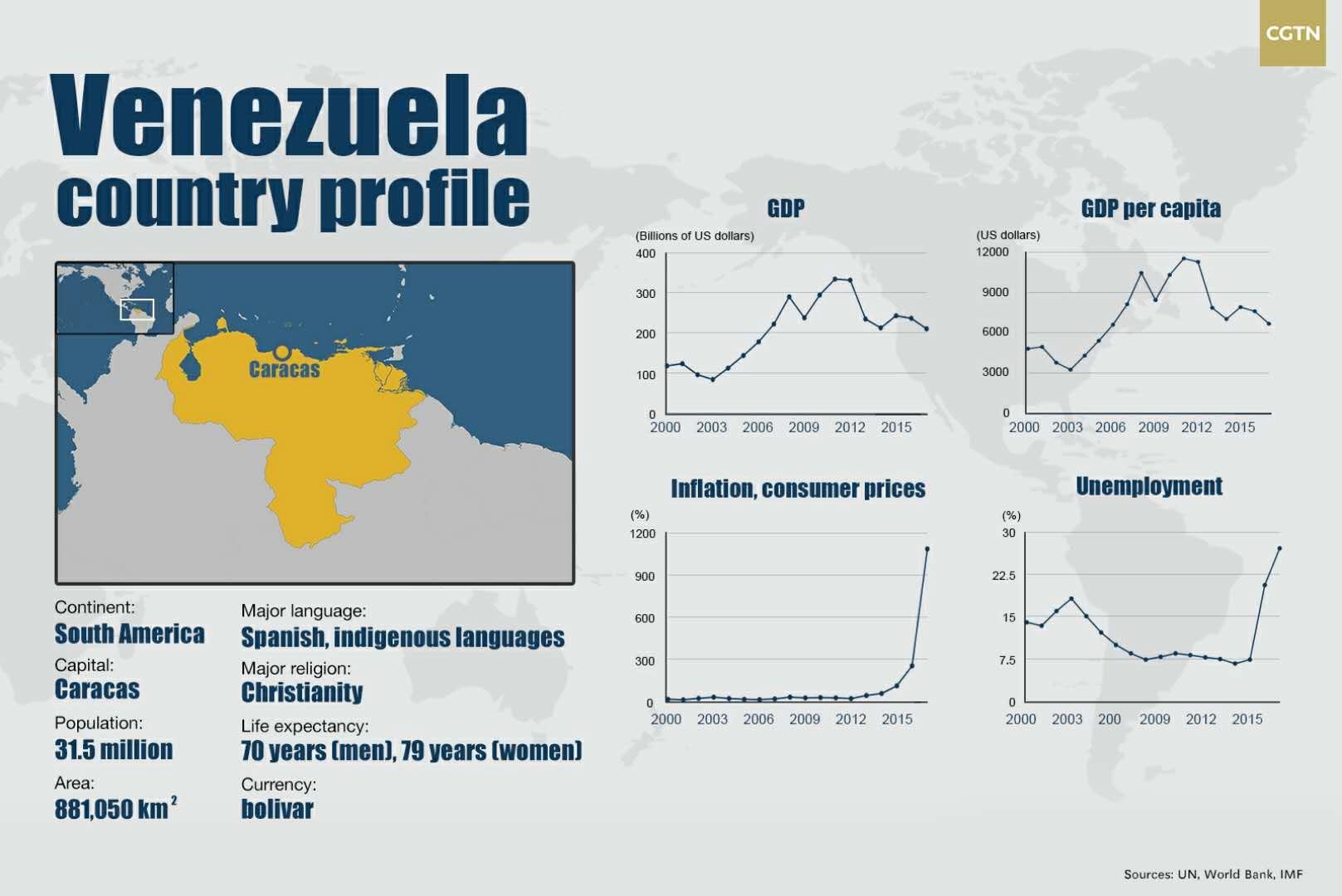 But an overreliance on oil – it accounts for about 95 percent of its export earnings – left the country vulnerable when prices dropped in 2014.
As a result, the cost of imported goods like food and medicine has risen, and currency inflation has skyrocketed.
The government is also increasingly struggling to get credit after it defaulted on some of its government bonds. In response, the government has printed more money, devaluing the currency further.
Inflation, which reached 1.35 million percent in 2018, is expected to hit a staggering 10 million percent, according to the International Monetary Fund.
Meanwhile, the country also suffered from increased international sanction. Maduro in a recent interview pointed out international sanctions that have made Venezuela lose at least some 20 billion U.S. dollars only during 2018. 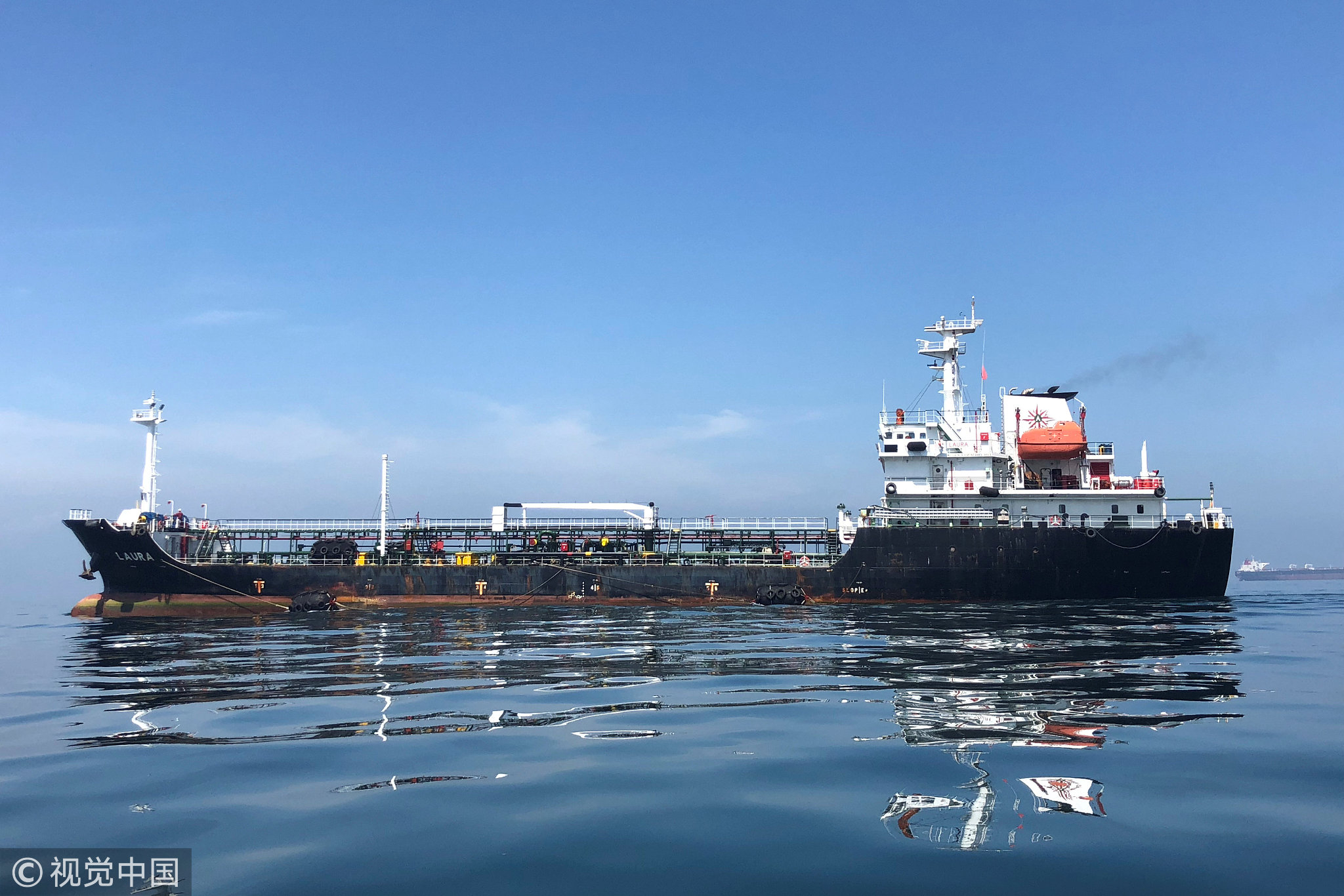 The president told the interviewer he won't deny the economic problems that exist in his country and he will lead the people to confront those issues.
He hoped that 2019 will be the year of recovery in oil production and is very determined to raise Venezuela's oil, petrochemical capacity, gold, diamonds, coltan, iron, steel, aluminum production in 2019.
According to Maduro, his Program of Economic Recovery, Growth and Prosperity proposed in last August has already made some main achievements as the government has the reins for the protection of employment, wages of the workers and the organized growth of key sectors of the economy.
Meanwhile, Maduro has won over six billion U.S. dollars worth of Russia's investment during Maduro's visit to Russia in December. The two sides reached agreements on cooperation in the oil extraction and mining industries, servicing Venezuelan weapons systems and delivering wheat to the South American. 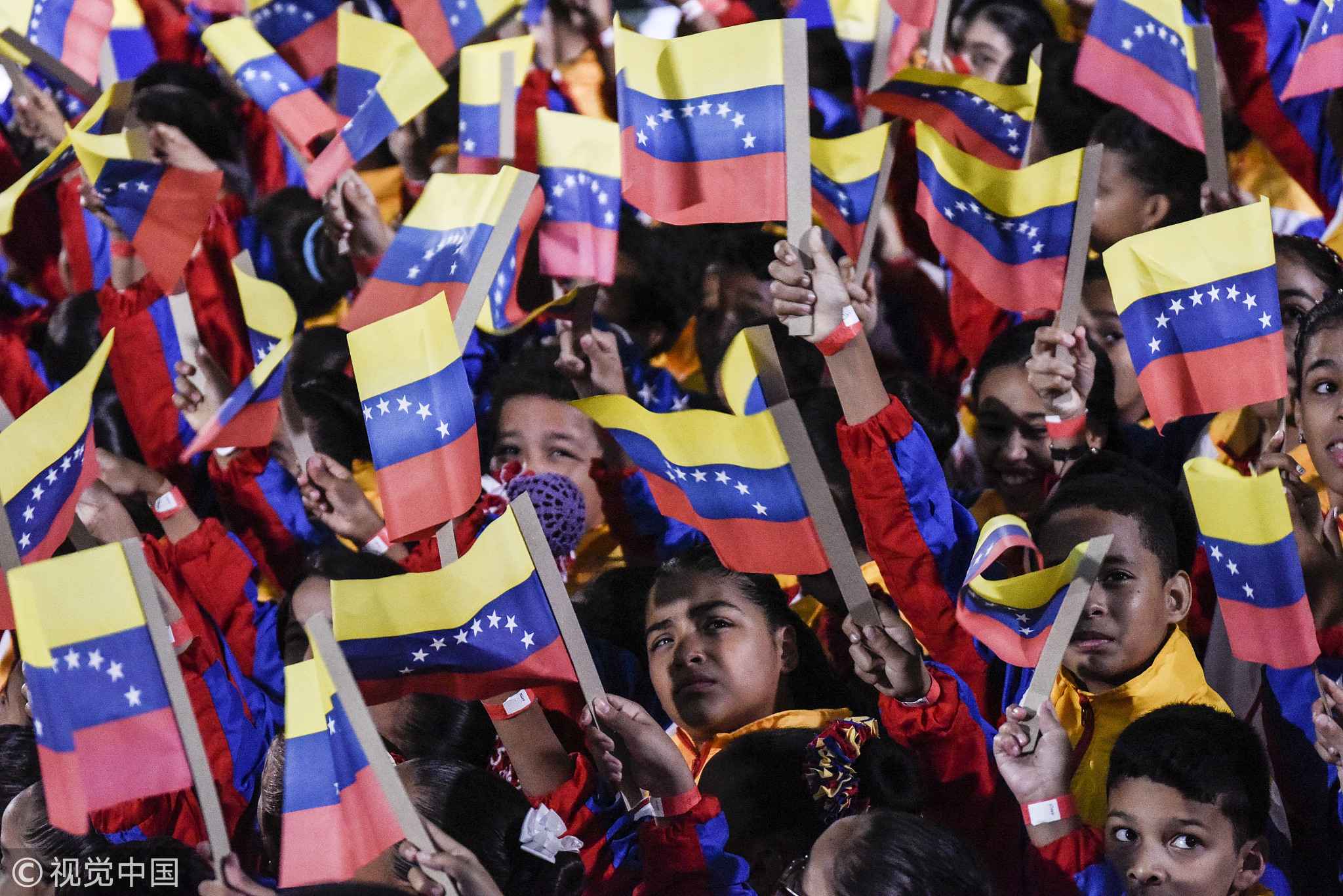 Children wave Venezuelan flags during the inauguration of Nicolas Maduro, Venezuela's president, not pictured, at the Supreme Court of Justice in Caracas, Venezuela, January 10, 2019. /VCG Photo

Children wave Venezuelan flags during the inauguration of Nicolas Maduro, Venezuela's president, not pictured, at the Supreme Court of Justice in Caracas, Venezuela, January 10, 2019. /VCG Photo

The Local Committee for Supply and Production (CLAP) which provides basic food boxes to around six million low-income families, is about to reach 3,000 productive municipalities and is advancing towards self-sufficiency in the production of maize, rice, sugar, pulses, cocoa, coffee and soya.
More than 10 million people have access to education and 75 percent of them are availing it in public schools for free, from elementary education to university, which is continuously improving in terms of quality.