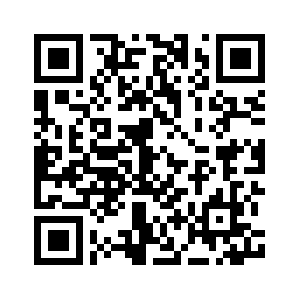 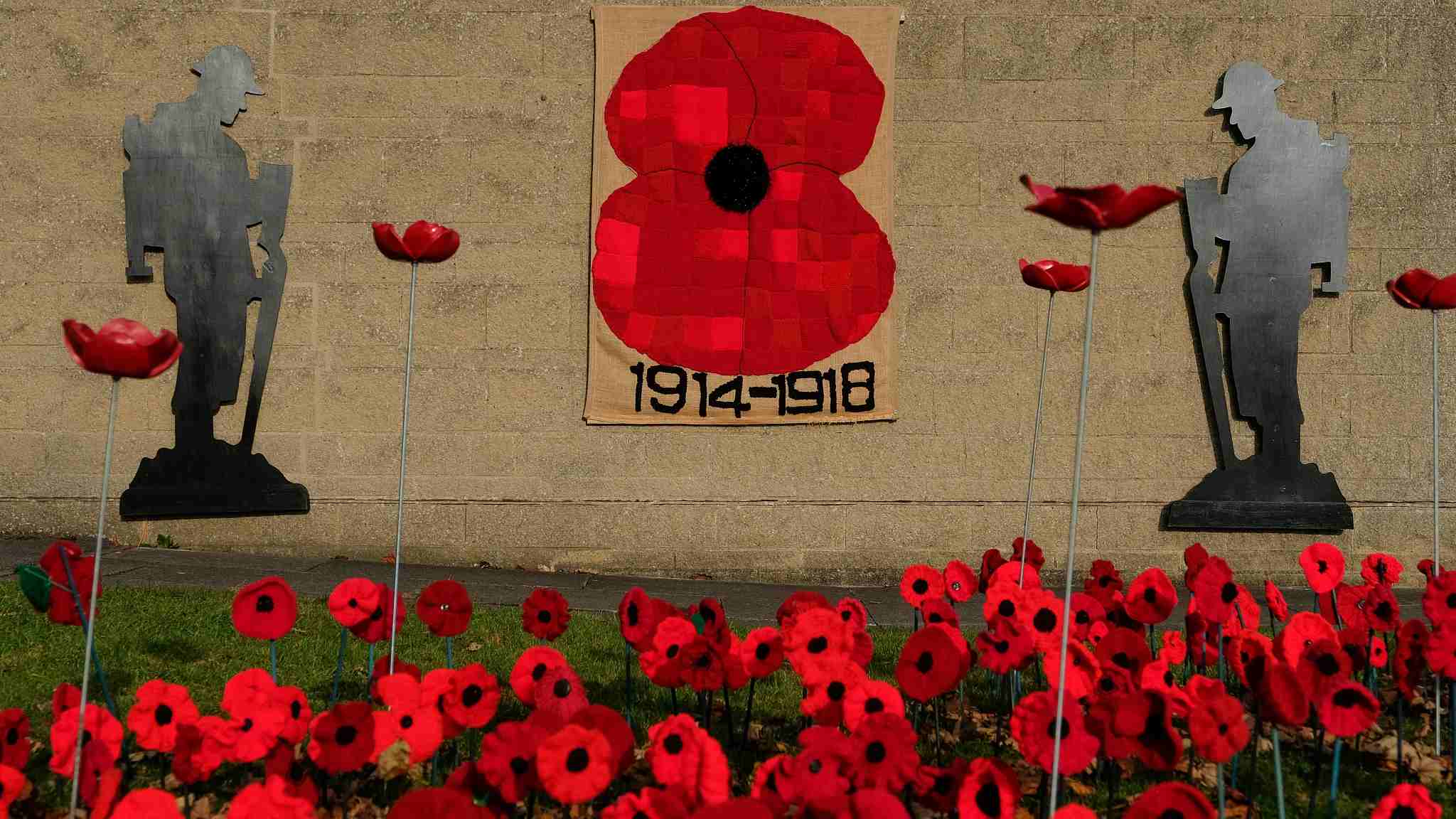 On November 11, 1918, in the forest of Compiegne northeast of Paris, the armistice ending World War I was signed. It put an end to a brutal war that caused over 30 million casualties and traumatized a continent for decades to come.
As Europe prepares to commemorate the 100th anniversary of the ceasefire, here is an overview of what to expect and a look at other events held in the run-up to Sunday.

It was meant to be the war to end all wars, but the sheer savagery of the fighting left an indelible mark on people's consciousness.
The world's first modern conflict, it engulfed all of Europe, pulling in allies from as far as the US, Australia and New Zealand.
For the first time, gas was used as a weapon on the battlefield – and the horrific results quickly led to chemical weapons being banned in war. 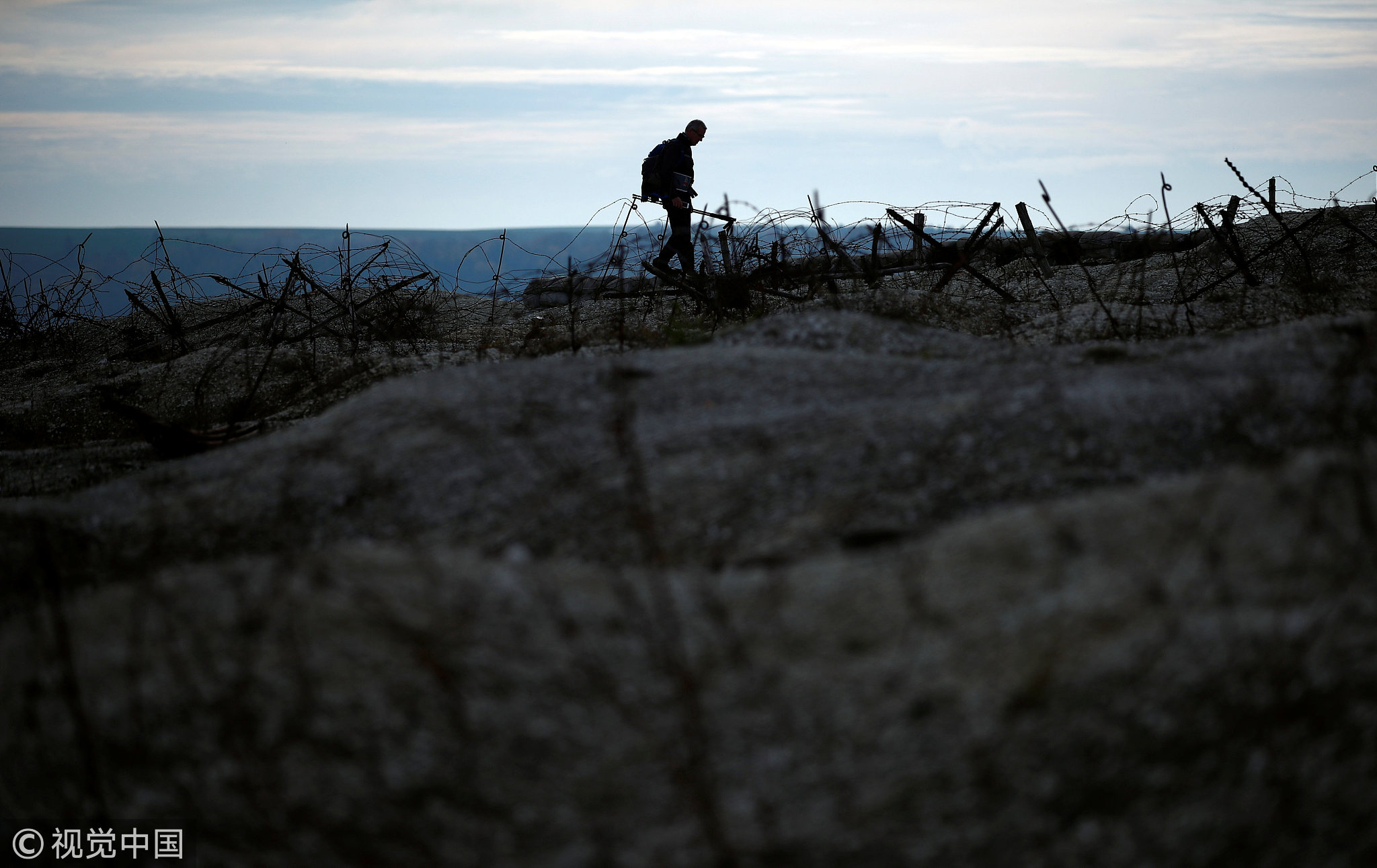 The names of some of the biggest battles still resonate today: Verdun, the Somme, Jutland, Gallipoli.
Not just soldiers but entire populations were mobilized to help the war effort. Tanks, planes and submarines were also put into service for the first time.
But the brutality of trench warfare remains the most prominent image of the war.
After four years of hard slog, often fighting for just a few meters of land, close to 10 million soldiers – from France, Germany, Britain, Russia, Italy, Austria-Hungary and farther afield – were dead. At least 20 million returned from the front wounded, maimed or traumatized for life.
Out of the wreckage of World War I, new countries emerged as empires disintegrated.
But the 1919 Treaty of Versailles, formally ending the war and imposing harsh reparations on Germany, also sowed the seeds for World War II.

On Sunday, the biggest commemoration will be held at Paris's famed Arc de Triomphe in the presence of some 70 world leaders, including German Chancellor Angela Merkel, Russian President Vladimir Putin, US President Donald Trump, Canadian Prime Minister Justin Trudeau and Turkish President Recep Tayyip Erdogan.
French President Emmanuel Macron will deliver a speech at the Tomb of the Unknown Soldier there. 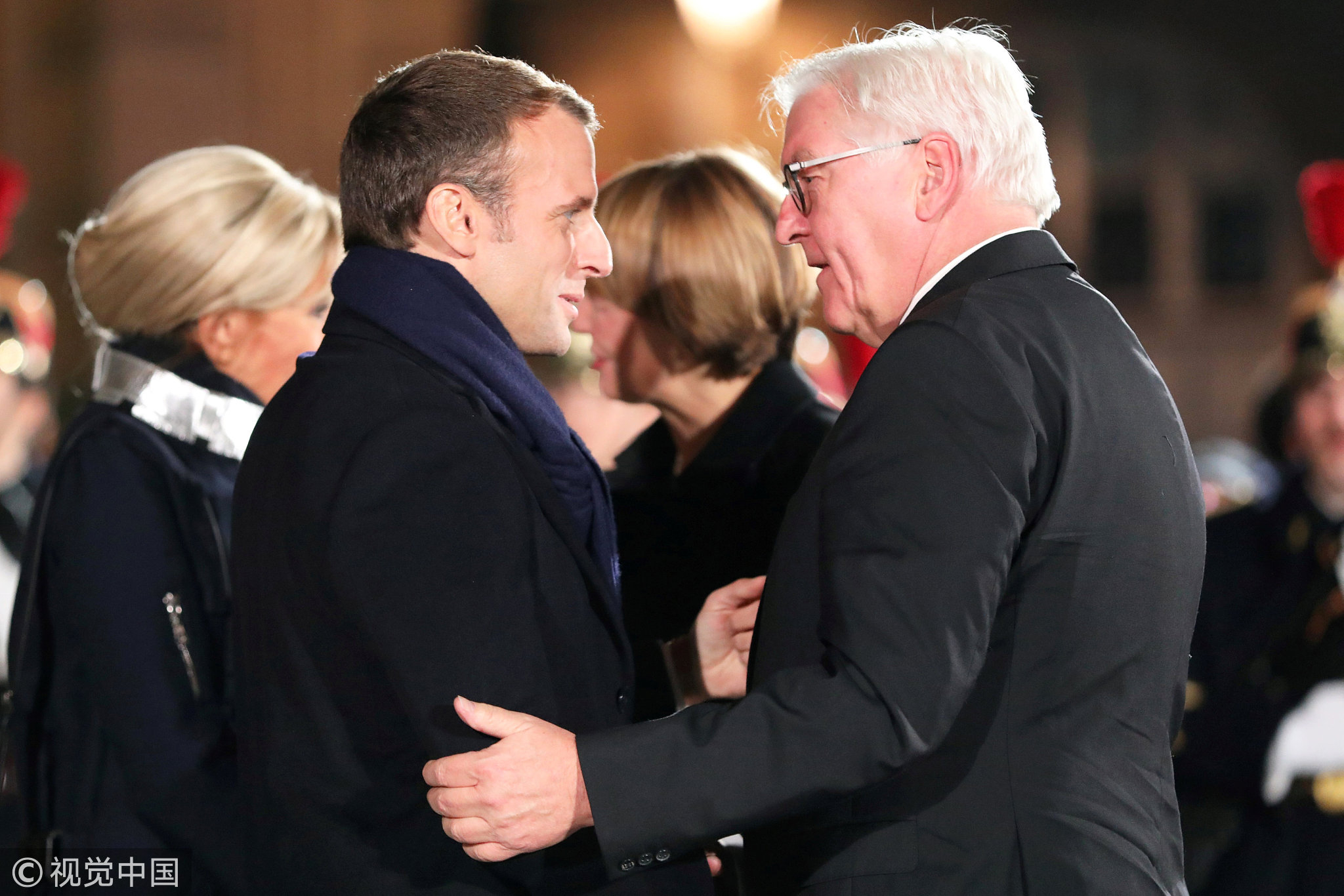 French President Emmanuel Macron welcomes German President Frank-Walter Steinmeier at the cathedral in Strasbourg, France, prior to a concert to mark the 100th anniversary of the end of World War I, November 4, 2018. /VCG Photo

French President Emmanuel Macron welcomes German President Frank-Walter Steinmeier at the cathedral in Strasbourg, France, prior to a concert to mark the 100th anniversary of the end of World War I, November 4, 2018. /VCG Photo

The leaders are then expected to take part in a Paris Peace Forum alongside UN chief Antonio Guterres, international organizations and NGOs, designed as a response against rising nationalism.
In London, German President Frank-Walter Steinmeier will take part in Remembrance Sunday commemorations and lay a wreath at the Cenotaph war memorial – the first German leader ever invited to do so, in what the British government called a "historic act of reconciliation." Steinmeier will later attend a mass at Westminster Abbey with Queen Elizabeth II.
At 11 a.m., the time when the guns fell silent 100 years ago, Big Ben will exceptionally strike 11 times, despite renovation work on the tower still being underway.
Bells are also expected to toll across France, Belgium, Britain, Canada, Australia and New Zealand, as well as in parts of Germany and the US, to commemorate the end of the war.

In the days leading up to the anniversary, European leaders were already busy commemorating the end of the "Great War."
Italy held a ceremony last Sunday with President Sergio Mattarella and Prime Minister Giuseppe Conte to coincide with the end of the war on the Italian front.
Macron and Steinmeier attended a concert in the border city of Strasbourg to highlight the friendship between their two countries, once bitter foes. The French president then embarked on a six-day tour of key battlefields in France. 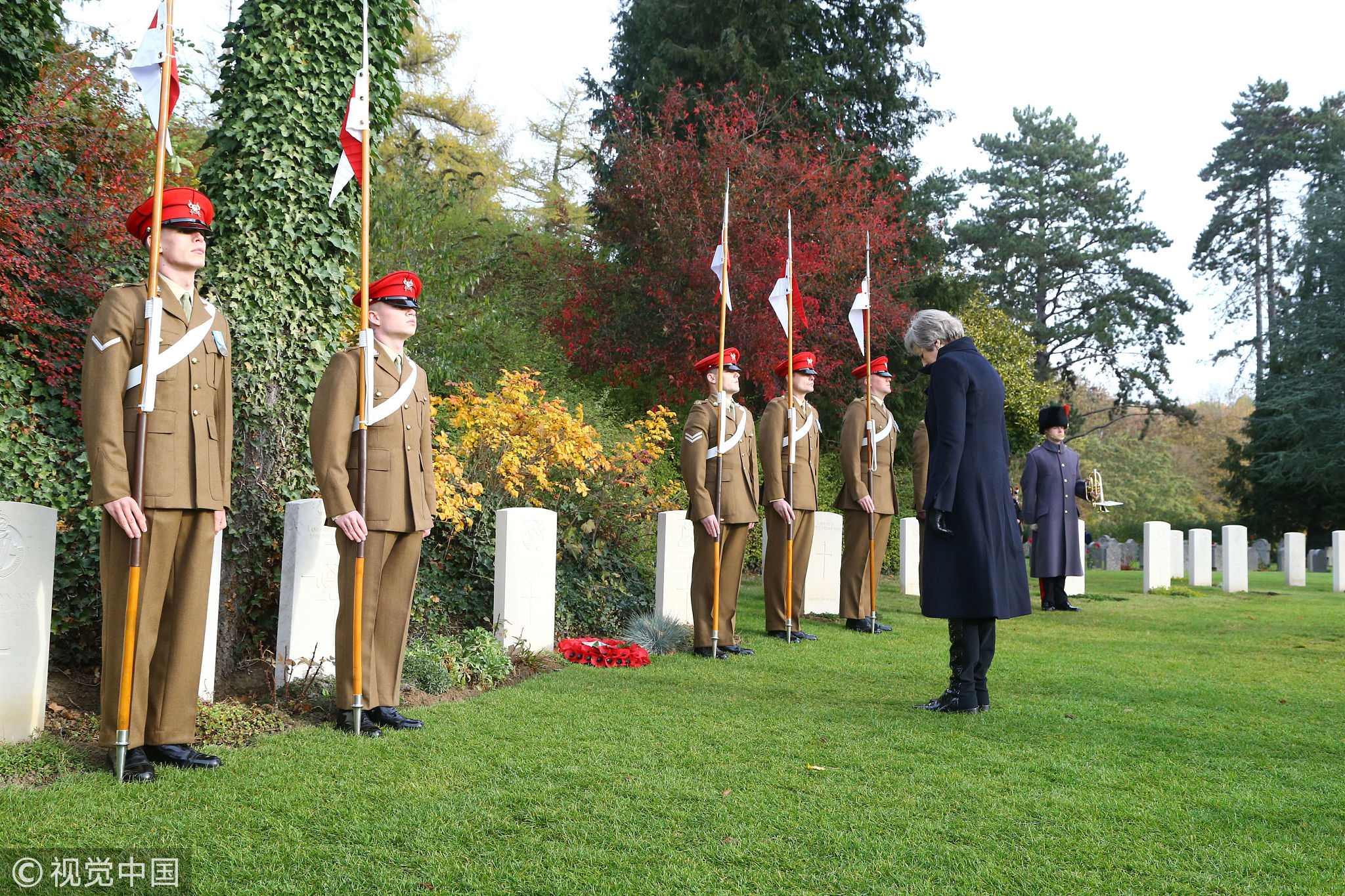 British Prime Minister Theresa May lays a wreath at the graves of British soldiers killed in World War I, in Mons, Belgium, November 9, 2018. /VCG Photo

British Prime Minister Theresa May lays a wreath at the graves of British soldiers killed in World War I, in Mons, Belgium, November 9, 2018. /VCG Photo

British Prime Minister Theresa May joined him on Friday at a memorial to those killed in the Battle of the Somme, one of the deadliest of World War I.
May also traveled to Mons, across the border in Belgium, where she lay wreaths on the tombs of British war dead along with Belgian Prime Minister Charles Michel.
On Saturday, Macron and Merkel are expected to visit Rethondes in the forest of Compiegne, where the armistice was signed in a train carriage on November 11, 1918.

The 100th anniversary of World War I has also provided an opportunity to remember the hundreds of thousands whose contributions have been all but forgotten.
An evening gala and photo exhibits in London and the Belgian city of Bruges this week paid tribute to some 140,000 Chinese workers who were recruited to dig trenches, build docks and provide logistical support on the frontlines between 1916 and 1918. 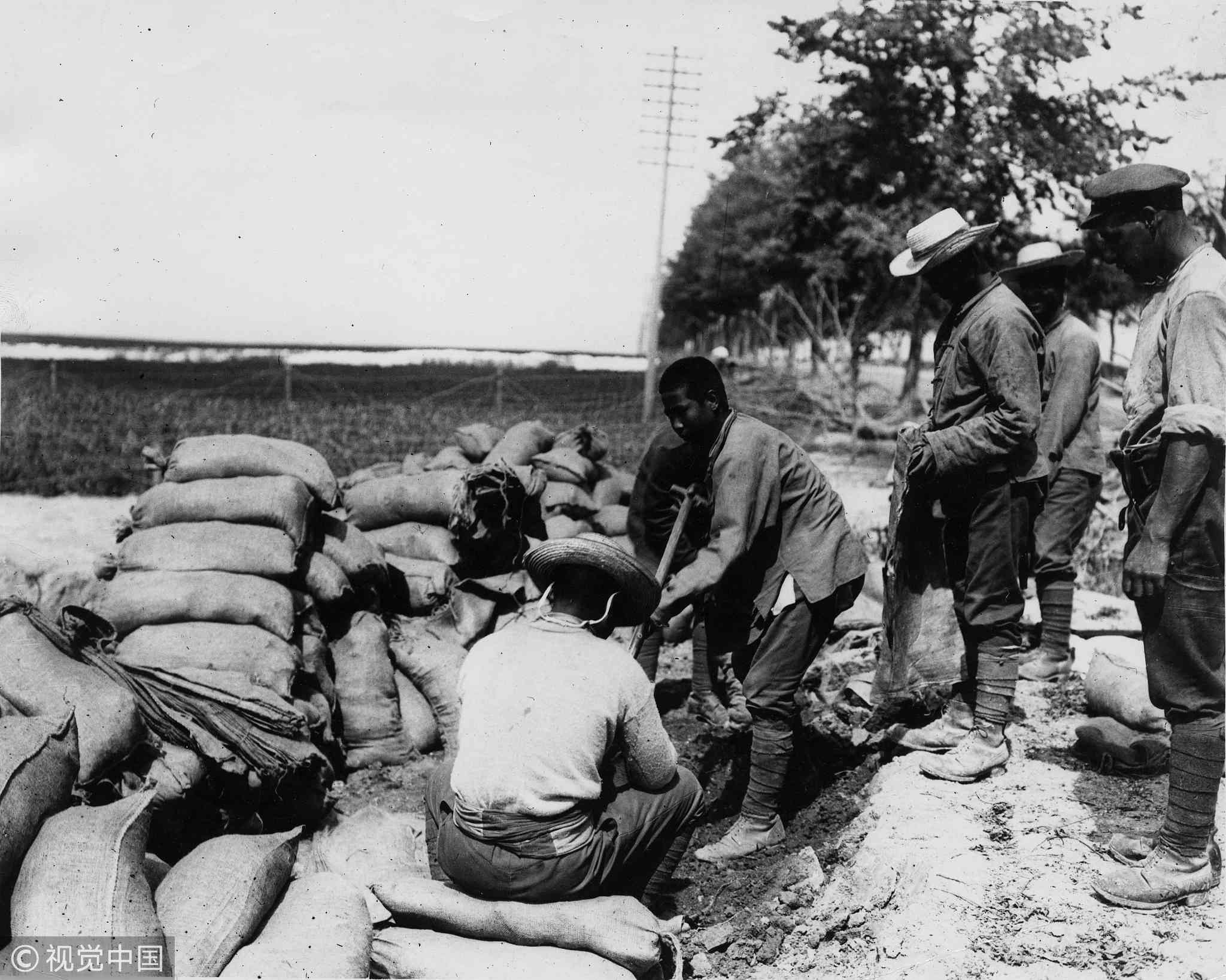 Of those, some 20,000 were killed or went missing. Close to 2,000 are buried in France and Belgium.
A British campaign group, Ensuring We Remember, is now pushing to create a permanent UK memorial for the Chinese Labor Corps.
"After the war, their story was forgotten for decades," Ma Hui, an official with the Chinese embassy in the UK, told Xinhua News Agency. Now finally, "the contribution of Chinese workers in World War I has begun to be recognized and valued by mainstream British society and people from all over the world."
Former imperial powers have been repeatedly criticized for not recognizing the role played by troops from the colonies, many of whom were recruited under dubious circumstances or forced into service. Many fought and died, not just on European battlefields but in Africa and the Pacific, as colonial powers battled for overseas dominions.
On Tuesday, Macron, together with Malian President Ibrahim Boubacar Keita, unveiled a monument honoring African soldiers who fought for France, in the northern city of Reims.
Macron also highlighted the contributions of "200,000 African soldiers from the colonies" in a tweet. Boubacar's own great-grandfather was killed in the Battle of Verdun.
Britain's Prince Charles also visited a memorial in Abuja honoring Nigerian troops who fought for the British Army, during an African tour this week.
(Cover: Knitted poppies are displayed representing people who died during World War I in Great Ayton, United Kingdom, November 6, 2018. /VCG Photo)