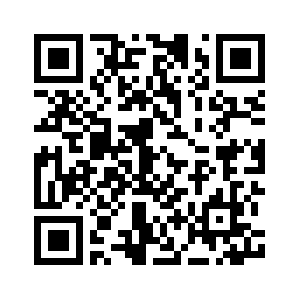 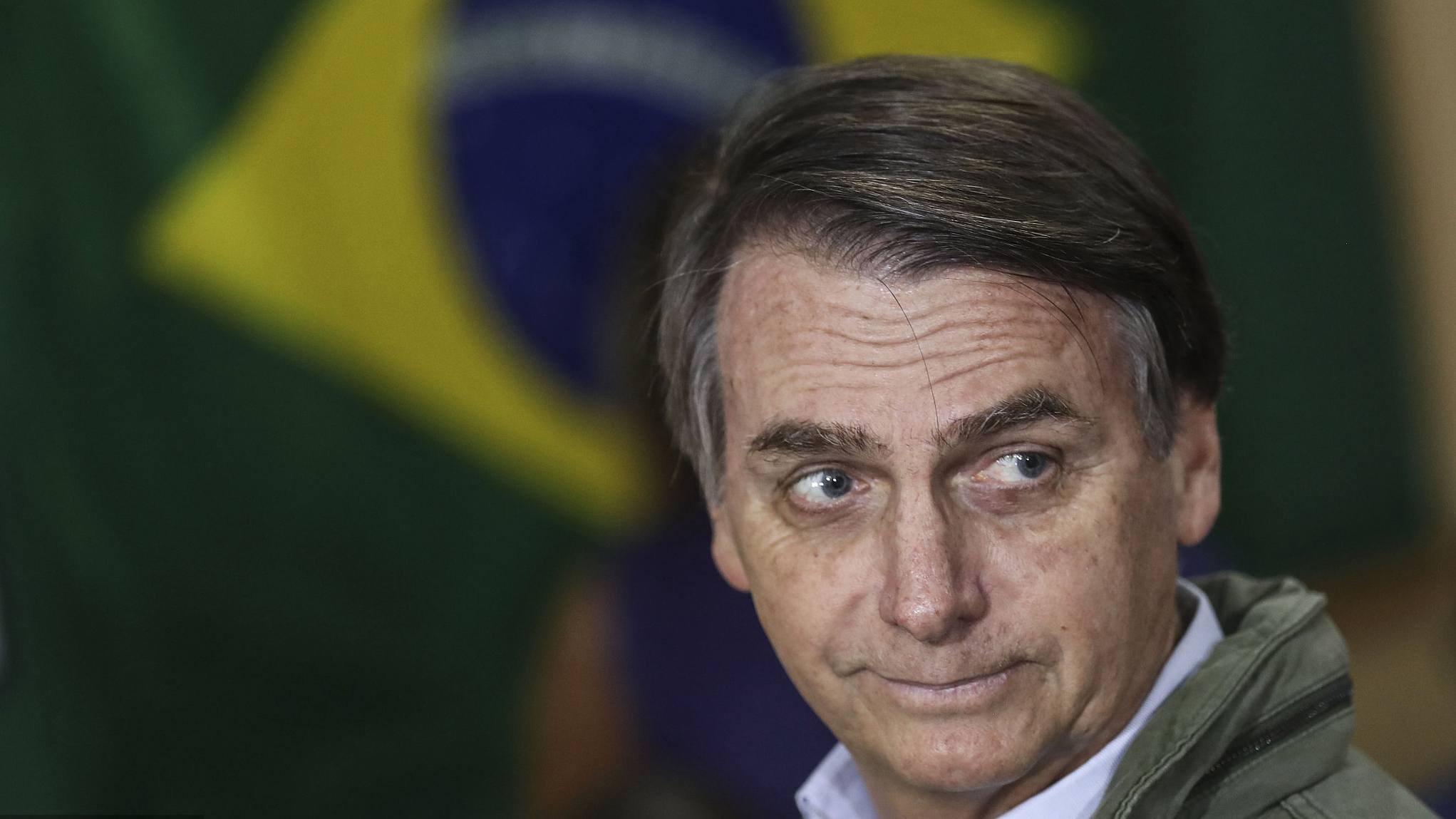 Editor's Note: Liu Jianxi is an opinion editor at CGTN Digital. The article reflects the author's opinions and not necessarily the views of CGTN.
Brazil's far-right ex-army captain Jair Bolsonaro rode a wave of voter rage to the presidency on Sunday. Described as "Brazil's Trump" for his homophobic and misogynistic remarks, Bolsonaro's victory has triggered widespread controversies.
There is nothing wrong with Brazil's political pendulum swinging to the right. The question facing the country is how far to the right it will swing and how this will affect the country's relations with major powers, including China.
The far-right leader has repeatedly criticized Beijing on his campaign trail, portraying China as a "predator" looking to dominate key sectors of Brazil's economy. "The Chinese are not buying in Brazil. They are buying Brazil," Bolsonaro warned earlier.
The former army captain was on record opposing a planned privatization of state-controlled energy company Electrobras on concerns that it would "leave Brazil in Chinese hands," according to Reuters.
Bolsonaro was also the first Brazilian presidential candidate to visit Taiwan in disregard of the "one-China" policy. Bolsonaro's provocative Taiwan trip was later sternly criticized by Chinese Embassy in Brazil as an "affront to the sovereignty and territorial integrity of China." 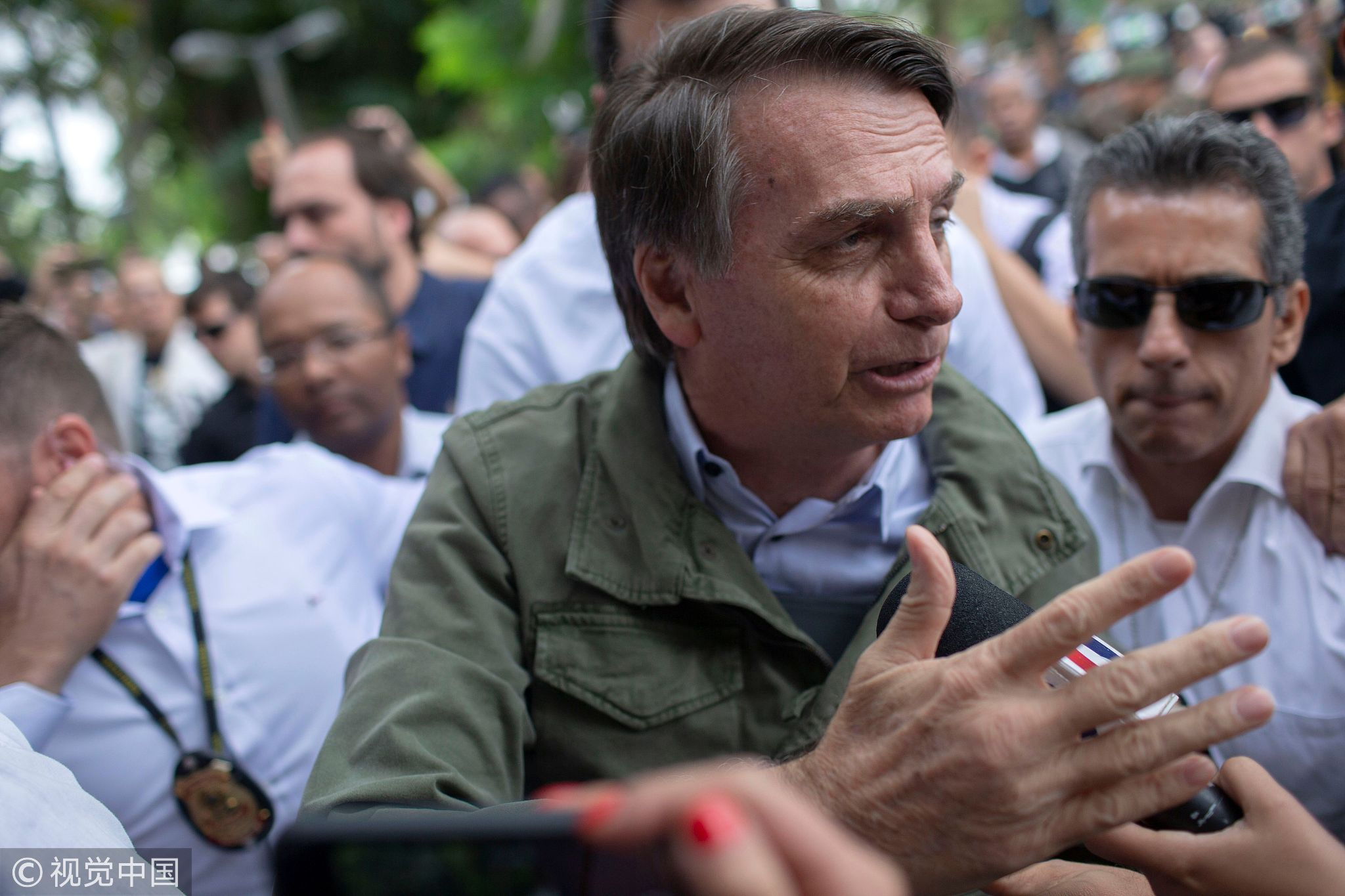 Bolsonaro greets supporters during the second round of the presidential elections in Rio de Janeiro, Brazil on October 28, 2018. /VCG Photo

Bolsonaro greets supporters during the second round of the presidential elections in Rio de Janeiro, Brazil on October 28, 2018. /VCG Photo

Despite the above, Bolsonaro's China-bashing is seen by many as a tactic to win votes. It will not put a strain on Sino-Brazilian ties that benefit both countries.
Considering the country's slipping fortunes in recent years, Bolsonaro will surely attach more importance to economic growth than diplomacy after taking office. In fact, diplomacy appears as the last item of Bolsonaro's 81-page government plan, the BBC reported.
China has maintained a low profile in Brazil's politics, and experts believe the Beijing factor carries little weight in Bolsonaro's political calculations. "China mostly instills neither fear nor admiration… people simply have no opinion of it," Oliver Stuenkel, an assistant professor of International Relations at the Getulio Vargas Foundation, said in Americas Quarterly.
Moreover, the far-right leader's tough Beijing stance is at odds with Brazilian companies and farmers, for whom China is an indispensable investor and export consumer. China displaced the US as Brazil's largest trading partner in 2009 and has become a new source of financing in the Brazilian economy. In 2017, Brazil's exports to China reached 50.2 billion USD, accounting for over 23 percent of its total amount.
Brazil's farming lobby, one of Bolsonaro's most fervent supporters, has stated that a good relationship with China is paramount. Brazilian exports of soy to China rose by 22 percent in value this year, with about 80 percent of its soy shipments heading there, according to media reports. 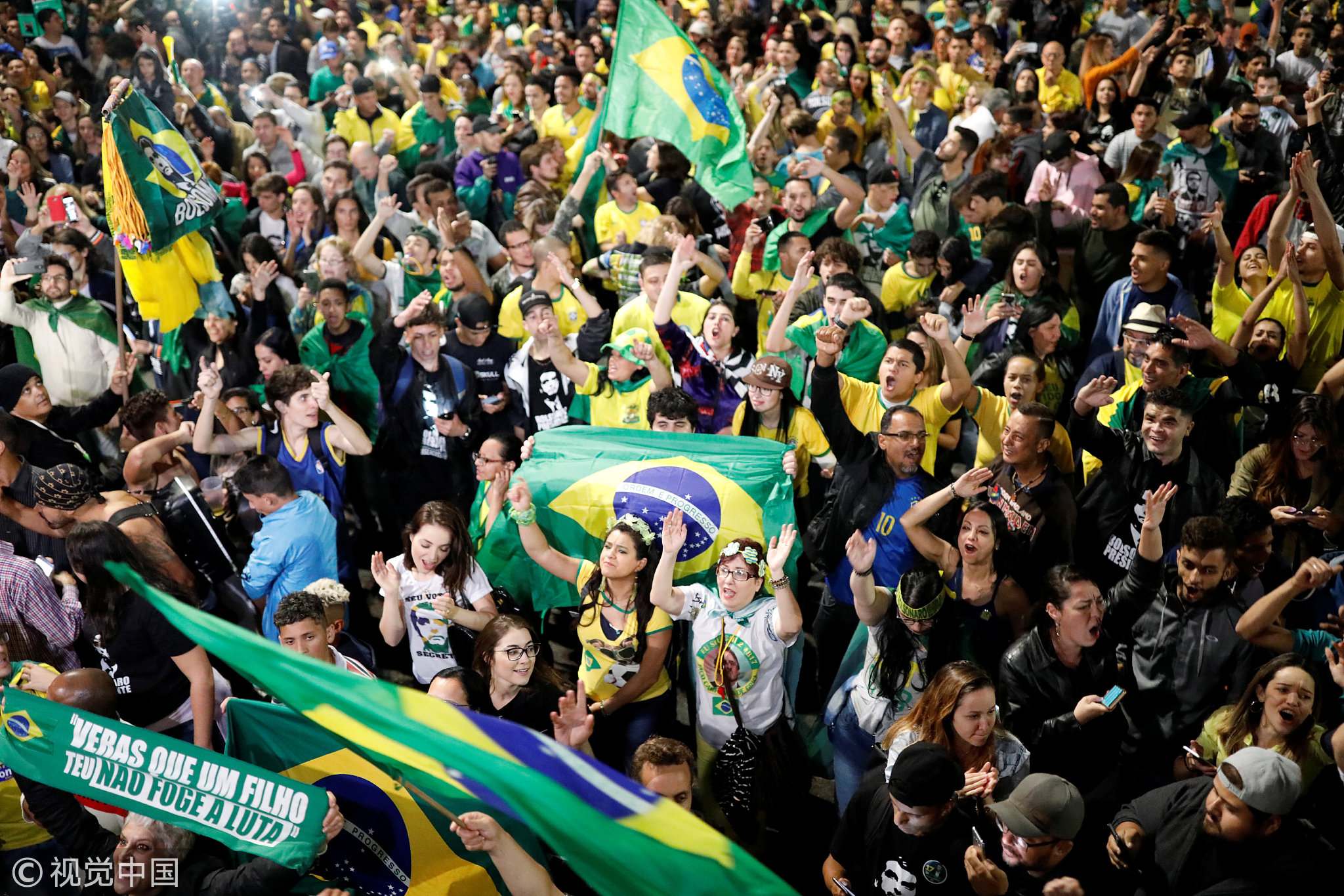 The economy is of vital importance to get votes. After the landslide victory, the newly-elected President pledged to realign his country with more advanced economies, among which China is apparently one of the most important.
"There is not one economy in the world that can occupy the space China occupies," Jorge Arbache, former secretary for international affairs at Brazil's planning ministry, was quoted by Reuters as saying. Given the above, Bolsonaro cannot afford to ruin ties with China. Anti-Beijing rhetoric and acts are shooting Brazil itself in the foot.
In fact, the far-right politician has already softened his tone on Beijing earlier in June. "I don't want any country buying up Brazil, but we will do business with all countries, and China is an exceptional partner," Bolsonaro reportedly said. 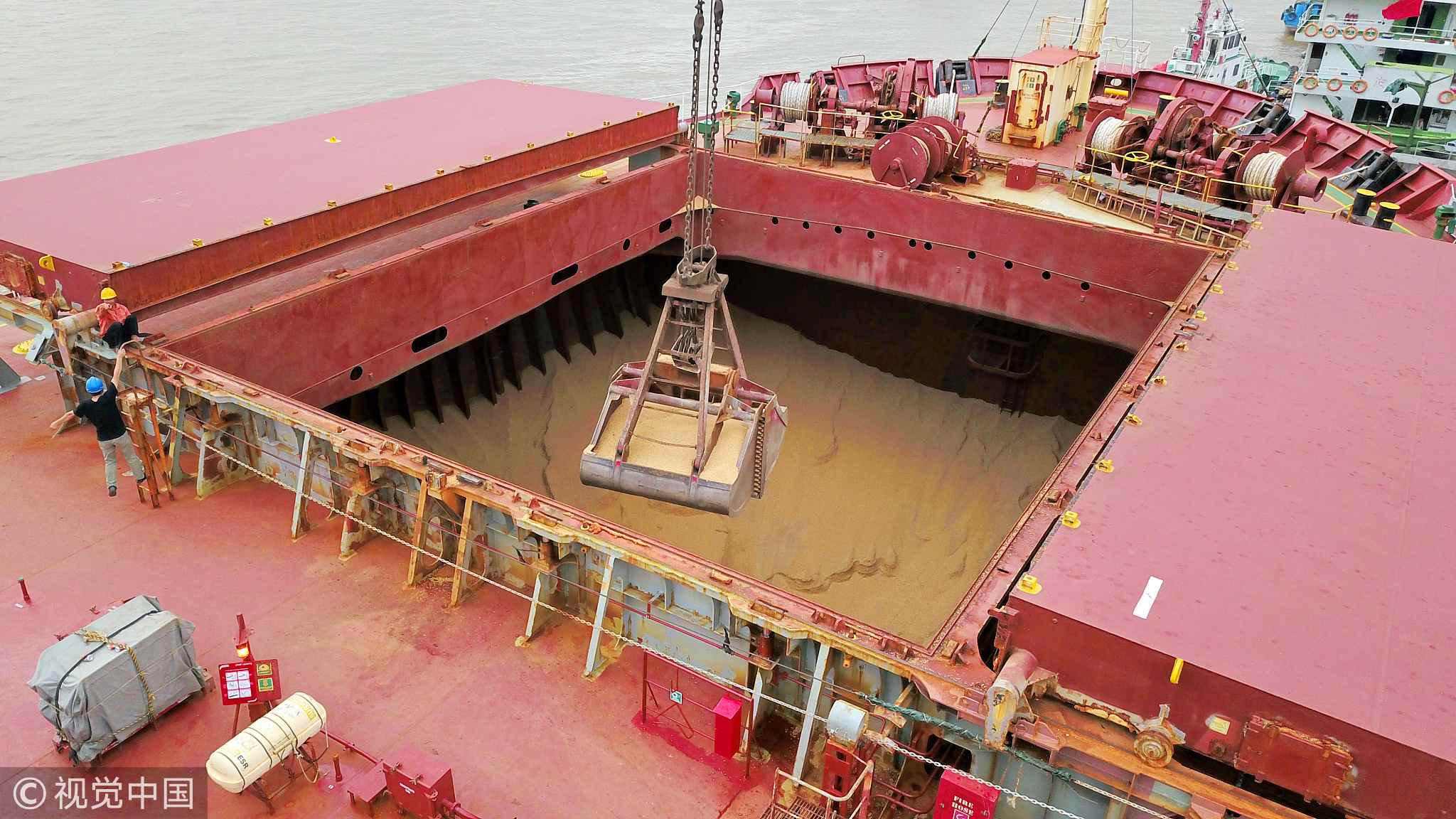 The cargo of Brazilian soy is being unloaded in Nantong, Jiangsu Province. /VCG Photo

The cargo of Brazilian soy is being unloaded in Nantong, Jiangsu Province. /VCG Photo

Sino-Brazilian relations are unlikely to see storms under Bolsonaro's term in office. The Chinese government is willing to deepen cooperation with Latin America's largest country and exchange mutual trust with Bolsonora. Earlier in September, diplomats from the two countries met to discuss the importance of their bilateral relations.
Both sides should create more favorable conditions for Bolsonaro to strengthen his knowledge of the world's second-largest economy. The far-right leader said in his acceptance address that "we cannot continue flirting with socialism, communism, populism and leftist extremism… We are going to change the destiny of Brazil."
It is hoped that Bolsonaro can respect China's territorial integrity, overcome stereotypes against Beijing, and deepen collaborations with this Asian nation for the well-being of the whole world.
(If you want to contribute and have specific expertise, please contact us at opinions@cgtn.com.)