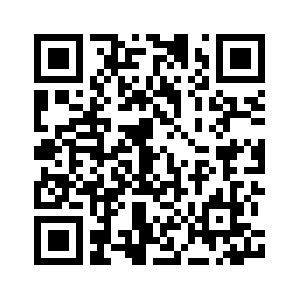 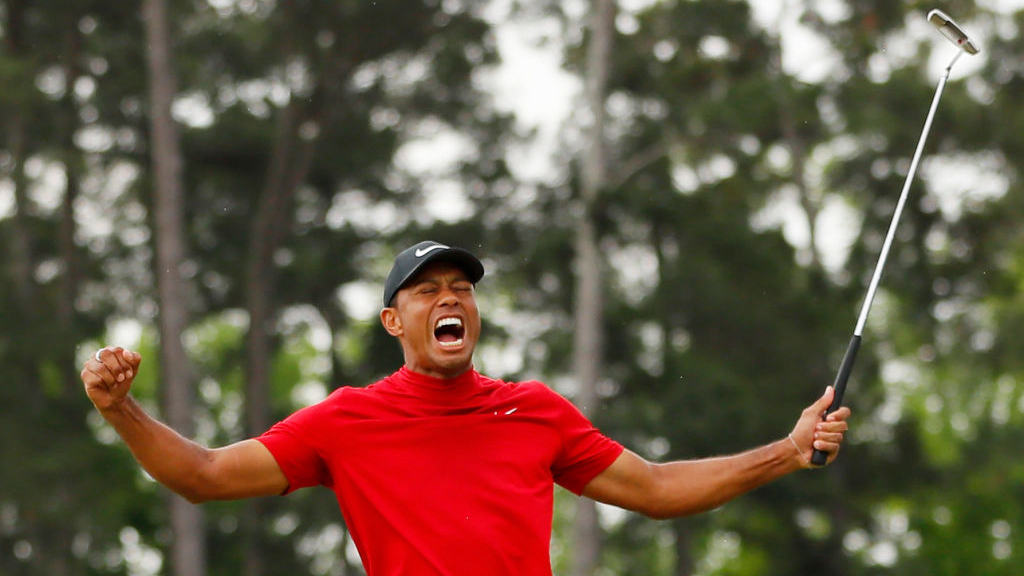 Tiger Woods won the 83rd Masters on Sunday, capturing his 15th major title to cement an epic return from scandal and injuries that once threatened his career.
Ending an 11-year major drought, the 43-year-old American superstar -- who underwent spinal fusion in 2017 fearing chronic back pain would deny him life's simple joys much less golf wins -- seized his first major title since the 2008 US Open.
Woods fired a final-round two-under par 70 to finish on 13-under 275 for a one-shot victory to capture a 2.07 million U.S. dollars (1.82 million euros) top prize and the green jacket symbolizing Masters supremacy.
An all-American trio of three-time major winner Brooks Koepka, world number two Dustin Johnson and Xander Schauffele shared second on 276.
"I don't know if there are words -- I'm sure he's ecstatic about it," Koepka said. "To have the injuries and come back and do what he has done, it has been tremendous to watch."
It was the fifth Masters title for Woods, his first since 2005, and it moved him three shy of the all-time record 18 majors won by Jack Nicklaus.
"A big well done from me to Tiger," Nicklaus told telecaster CBS. "I'm so happy for him and for the game of golf this is so fantastic."
The triumph was the first major victory for Woods when he did not lead after 54 holes, having started the day two adrift of reigning British Open champion Francesco Molinari. 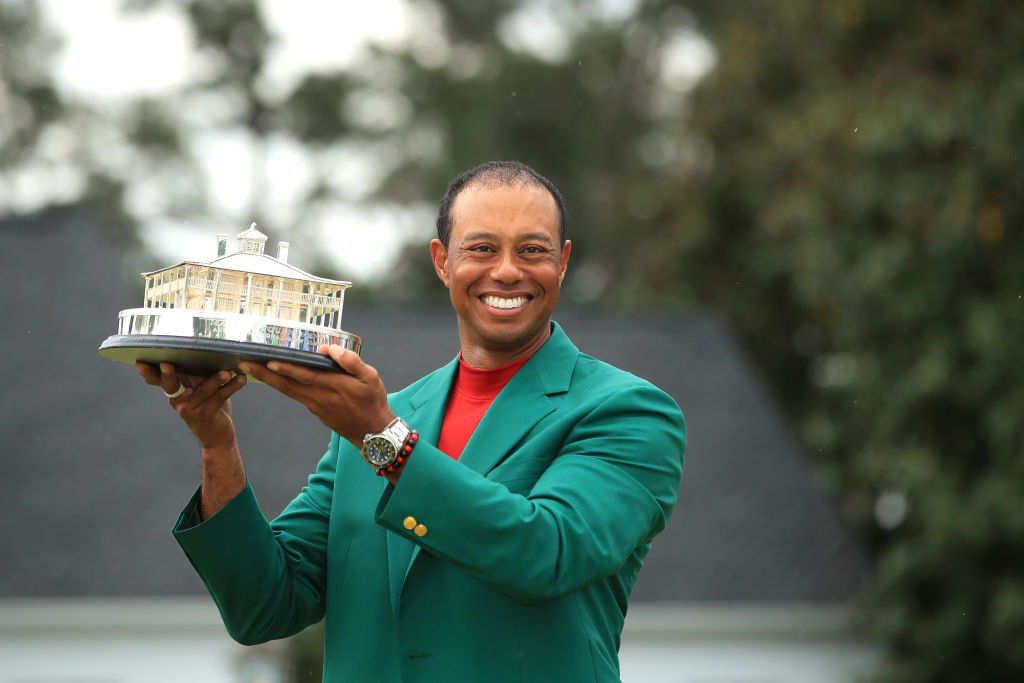 Tiger Woods of the United States celebrates with the Masters Trophy during the Green Jacket Ceremony after winning the Masters at Augusta National Golf Club in Augusta, Georgia on April 14, 2019. /VCG Photo

Tiger Woods of the United States celebrates with the Masters Trophy during the Green Jacket Ceremony after winning the Masters at Augusta National Golf Club in Augusta, Georgia on April 14, 2019. /VCG Photo

Woods served to notice he had returned to form by contending last year at the British Open and PGA before snapping a five-year title drought by capturing the Tour Championship.
Racing to finish before an oncoming thunderstorm, players created their own electric atmosphere, spectators roaring repeatedly for sensational shotmaking on one of golf's iconic stages at Augusta National, where Woods won his first major title in 1997.

Woods then drove the green in two at the par-5 15th and tapped in for birdie to seize the lead alone at 13-under par then sank a four-foot birdie putt at the par-3 16th to stretch his advantage to two shots with two holes remaining.
Woods parred 17 and walked up to the 18th green to crowds 20-people deep applauding with delight, but he kept a stoic visage until the job was complete, a tap-in for bogey followed by a fist pump and a scream of joy in celebration of a fairytale fightback like few others in sporting history.
Just off the 18th green, Woods hugged his mother as he had his late father Earl in 1997 and held his children, his back more than up to the task as the crowd chanted his name, a rare tribute, and rivals congratulated him as he entered the clubhouse.
Woods, one shy of matching Nicklaus for the most career Masters wins, won his 81st career US PGA victory, one shy of the all-time record held by Sam Snead.
He also set a record for the longest gap between Masters triumphs, the 14-year spread one year longer than the old mark set by South African Gary Player from 1961 to 1974.
It completes a fairytale comeback to the pinnacle of golf for Woods, whose career imploded after a 2009 sex scandal before unraveling amid injuries and personal problems 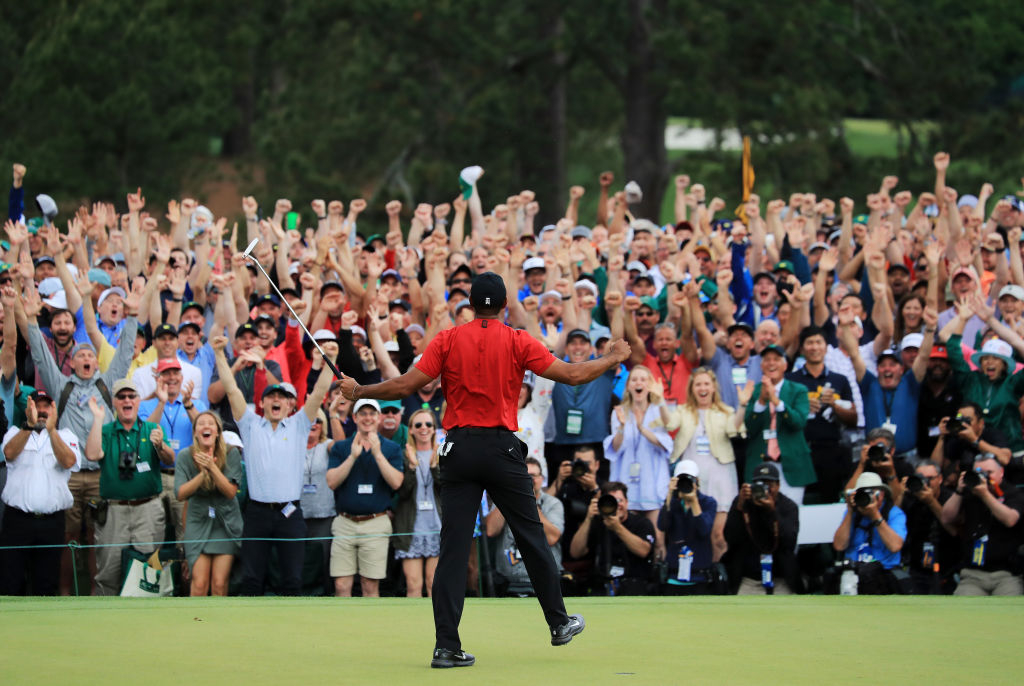 Tiger Woods celebrates after sinking his putt on the 18th green to win during the final round. /VCG Photo

Tiger Woods celebrates after sinking his putt on the 18th green to win during the final round. /VCG Photo

After battling to overhaul 54-hole leader Francesco Molinari of Italy, Woods birdied the par-5 13th to join a lead pack of five at 12-under.
Woods, Molinari, Xander Schauffele, Brooks Kopeka and Dustin Johnson -- with Australian Jason Day in the clubhouse on 11-under and Patrick Cantlay, who also hit 12-under, foiled by bogeys at 16 and 17.
Woods and Molinari, in the last trio, each birdied the par-5 13th to reach 12-under while Johnson reeled off three consecutive birdies, the last on an 11-foot putt at 17, to make 12-under.
Schauffele got there on birdies at 14 and 15 and Koepka by answering a double bogey at the par-3 12th with an eagle at 13 and birdie at 15.
None could go lower except Woods, with Molinari undone at the par-5 15th when his approach struck a tree limb and his chip barely clung to the side of a damp slope on the way to a double-bogey disaster.
Augusta National moved the final round to Sunday morning due to storms expected to arrive in the afternoon, when leaders would typically be battling for the title.
The Masters, which has not had a Monday conclusion since 1983, decided to cancel its green jacket ceremony at the 18th green in order to hurry spectators to the exits faster.
Source(s): AFP