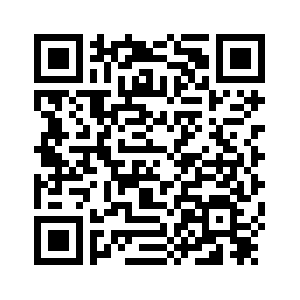 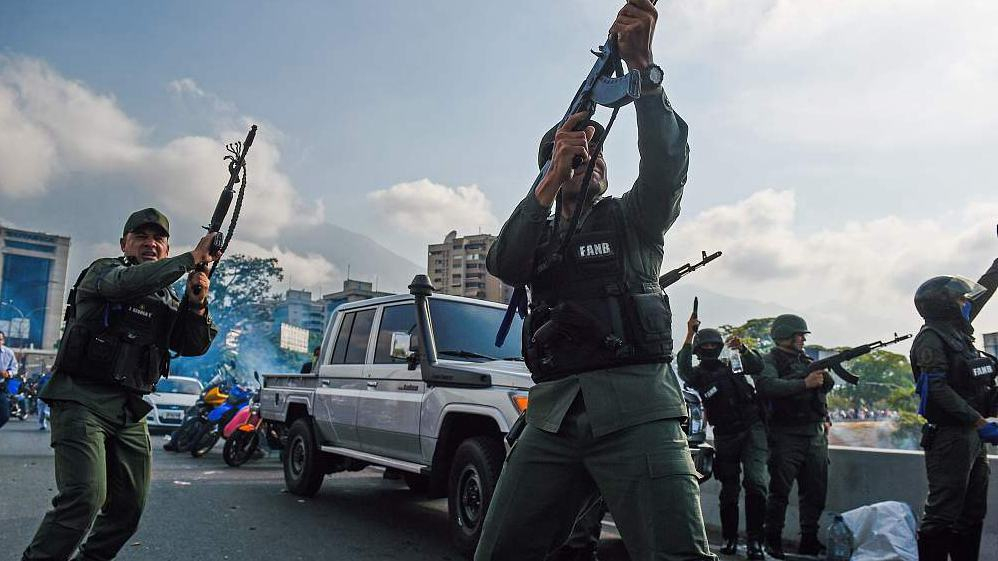 Editor's Note: Adam Garrie is the director of the UK-based global policy and analysis think tank Eurasia Future and co-host of the talk show "The History Boys." The article reflects the author's opinion, and not necessarily the views of CGTN.
On April 30, in the midst of disquiet on the streets of Caracas, U.S. National Security Adviser John Bolton called for a "change in the regime" in Venezuela. Bolton's choice of words is telling as the phrase "regime change" has tended only to be hinted at rather than directly uttered by U.S. politicians since the infamous 2003 invasion of Iraq under the specific pretext of "regime change."
The fact that Bolton so boldly returned the phrase to the lexicon of the American leadership is designed to send a clear message to the broader world. The message is one of unabashed U.S. unilateralism that in this case is directed against an economically and militarily weaker Latin American power.
Countries as diverse as Turkey, South Africa, Russia, Bolivia and China have already made their positions on the U.S.-Venezuela issue clear in the appropriate forum, the United Nations Security Council.
It is the position of virtually all of Asian and African countries that internal political disputes in Venezuela should only be solved through a dialogue-based approach. Insofar as this is the case, should a neutral mediator be agreed upon by various factions in Venezuela, this is also an option that is on the table. 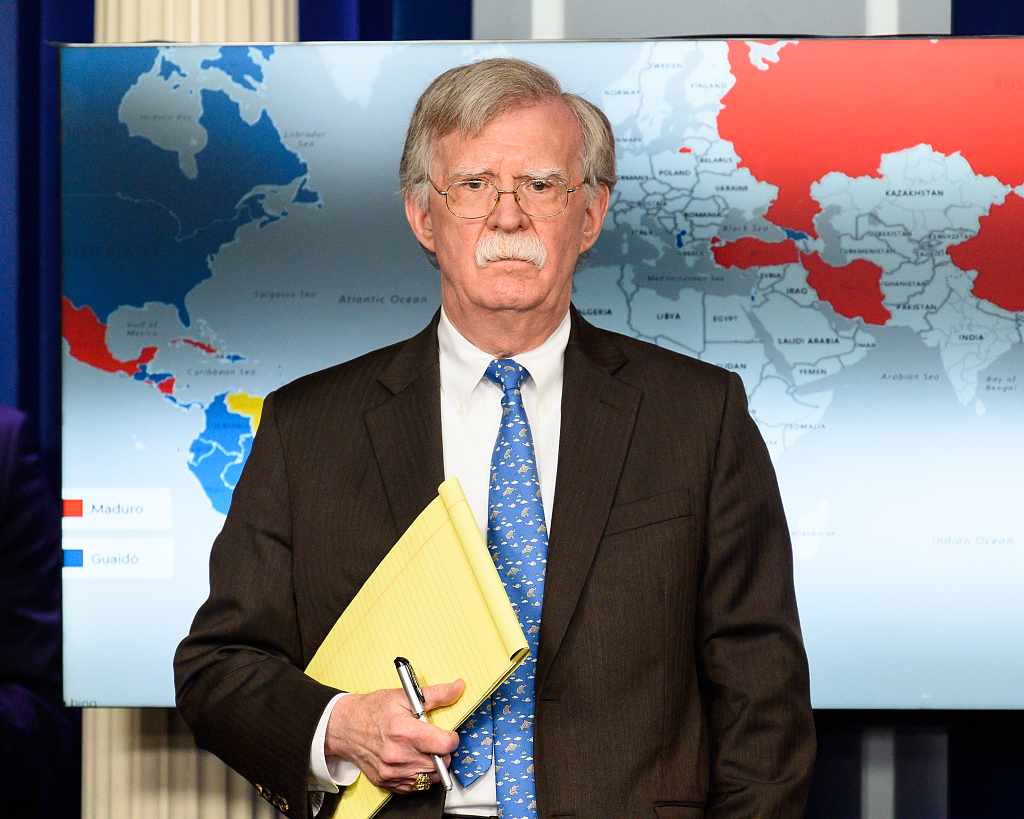 But for the United States, the dialogue option has never been on the table. As early as January of this year, Washington recognized a self-proclaimed national leader Juan Guaido as Venezuelan President, even though the United Nations has made it very clear that the recently re-elected Nicolas Maduro remains the head of state according to international law.
By so blatantly calling for a change of political power months after recognizing a self-proclaimed leader, the United States is providing the international community with a textbook example regarding the dangers of unilateralism.
By acting outside of the proper channels of international law in order to manipulate the tense situation on the ground in Venezuela in order to serve one's narrow perceived national advantage, the U.S. is setting a deeply dangerous precedent whereby any nation whose internal political system is sufficiently different to that of most U.S. allies will be subject to international harassment at the hands of a military superpower.
International law dictates that only a non-interventionist approach to the internal affairs of other nations is legally sound and ethically correct. When genuine problems do arise in one nation or region, the only appropriate place for such issues to be discussed and resolved is at the United Nations, and as recent history has very clearly indicated, a military "solution" to such issues only creates more chaos and bloodshed. 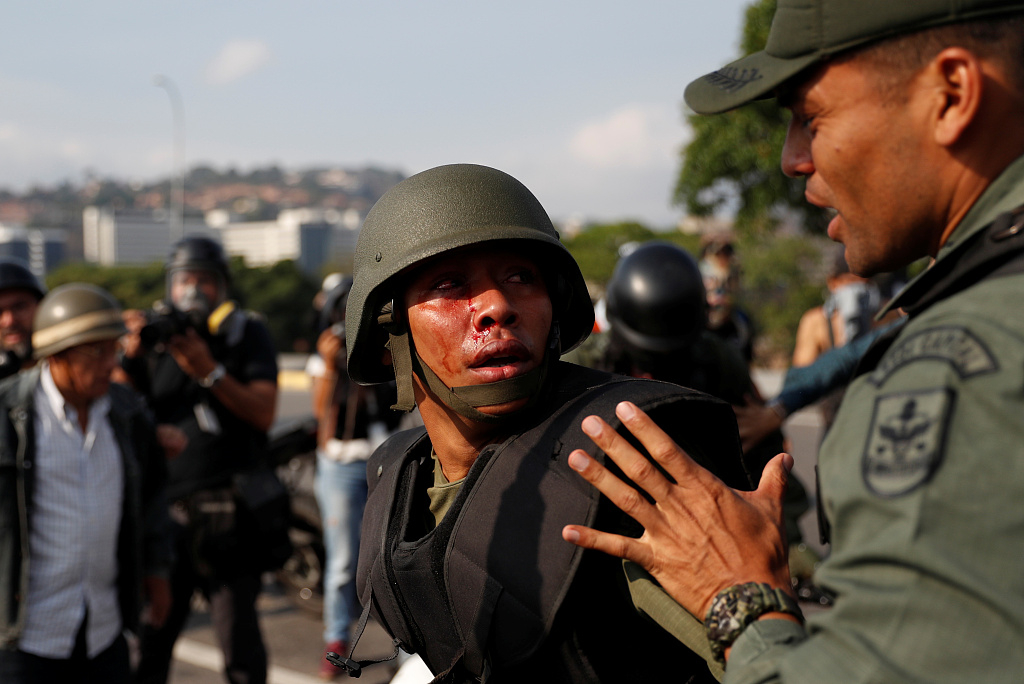 An injured soldier is seen on a street in Caracas, Venezuela, April 30, 2019. /VCG Photo

An injured soldier is seen on a street in Caracas, Venezuela, April 30, 2019. /VCG Photo

In instances where the U.S. acts without UN approval such as in Yugoslavia, Syria or Iraq, the consequences are uniformly negative.
It would be illogical to wish that the U.S. should change its opinion in the broader world. But it is not only rational but legally correct to desire an international situation in which the United States offers its views and proposals in a multilateral format such as the United Nations.
Instead, the U.S. continues to act as though it is a law unto itself and if this continues, it could cause a great deal of chaos and even bloodshed for ordinary Venezuelans.
Whether unilaterally threatening countries with sanctions outside of the United Nations or declaring the beginning of a political power change operation, the unilateral mentality of the United States is bound only to cause conflict rather than instigate a process of peaceful conflict resolution.
If the world is to become a safer place, multilateral conflict resolution mechanisms that prioritize dialogue and restraint over threats and reckless actions must be the practical method used by all nations that wish to de-escalate crises rather than inflame them.
Implicit in such a process is the unconditional respect for the sovereignty of all nations, whether partners or countries with which one's relations are strained.
(If you want to contribute and have specific expertise, please contact us at opinions@cgtn.com.)