Will these be the most polarized US midterms ever?
By Sim Sim Wissgott 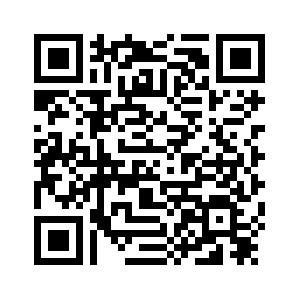 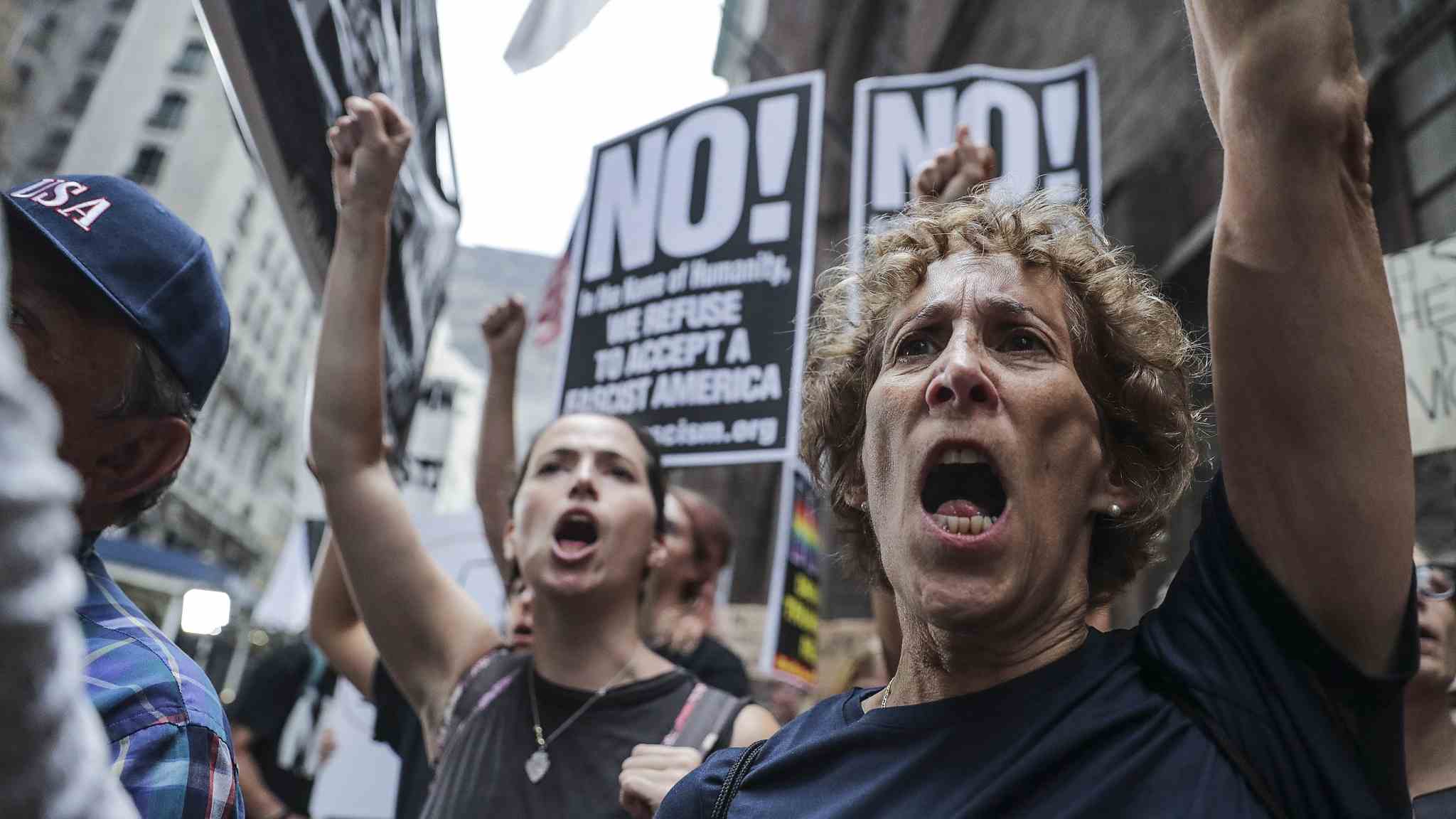 Pipe bombs in the mail, an attack on a synagogue – the news over the past few weeks has highlighted the intense divisions in the US ahead of midterm elections on November 6.
Helped by President Donald Trump, the political gulf between Republicans and Democrats has carried over to other parts of society, impacting how people act, how journalists report on the news, and even how families get along.
So are these the most polarized midterms ever?

Since coming to power, Trump has made clear he is no fan of the media, coining the term "fake news" to describe any commentary critical of him or his administration, and openly attacking outlets like CNN and the "failing" New York Times (NYT).
News organizations have hit back.
After Trump called the media the "enemy of the people," over 300 newspapers responded with editorials condemning the president's rhetoric and defending freedom of the press on August 16. 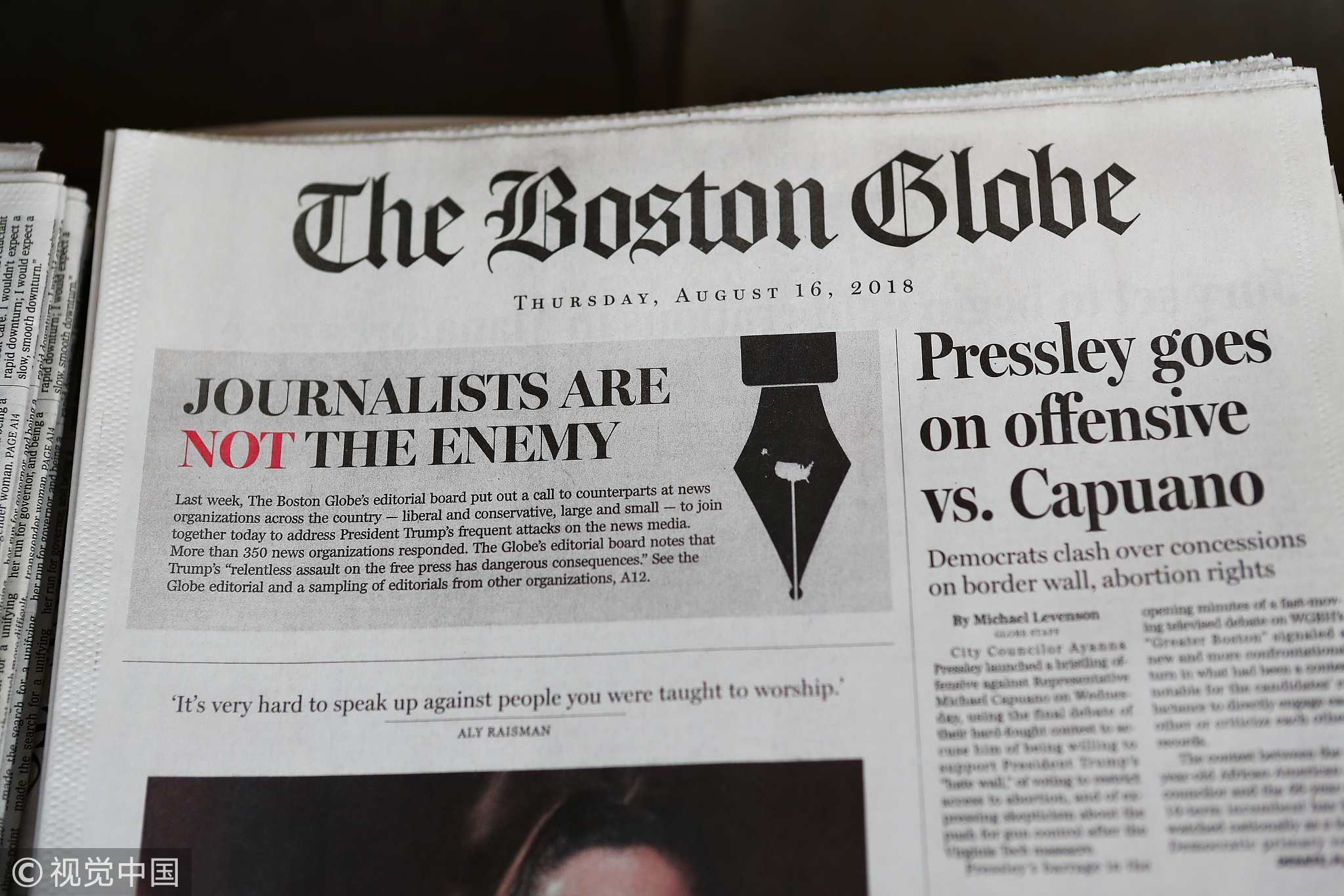 The front page of the Boston Globe newspaper on August 16, 2018. /VCG Photo

The front page of the Boston Globe newspaper on August 16, 2018. /VCG Photo

CNN recently ran a story slamming Trump's "amoral approach to the presidency."
At the other end of the political spectrum, Fox News published an opinion piece headlined: "The hypocritical New York Times hits a new low (and other liberal media outrages this week)."
Battle lines have been drawn between Trump, Republicans and Fox News on the one hand, and Democrats and the "mainstream media" – CNN, MSNBC, the Washington Post and more – on the other.
Political slant is nothing new, but the perception now is that news organizations are either pro- or anti-Trump.
A 2017 report by the Reuters Institute found that media in the US was far more polarized than in any other Western country, with nobody occupying the political center.

Hate on the street

Last weekend's shooting at a synagogue in Pittsburgh, which left 11 dead, exemplified for many the climate of hatred that has engulfed parts of the US.
Trump's critics have pointed to his aggressive rhetoric on migrants, Muslims, Mexicans, the LGBT community and other minorities, as well as his defense of white nationalists, to explain the wave of recent attacks. 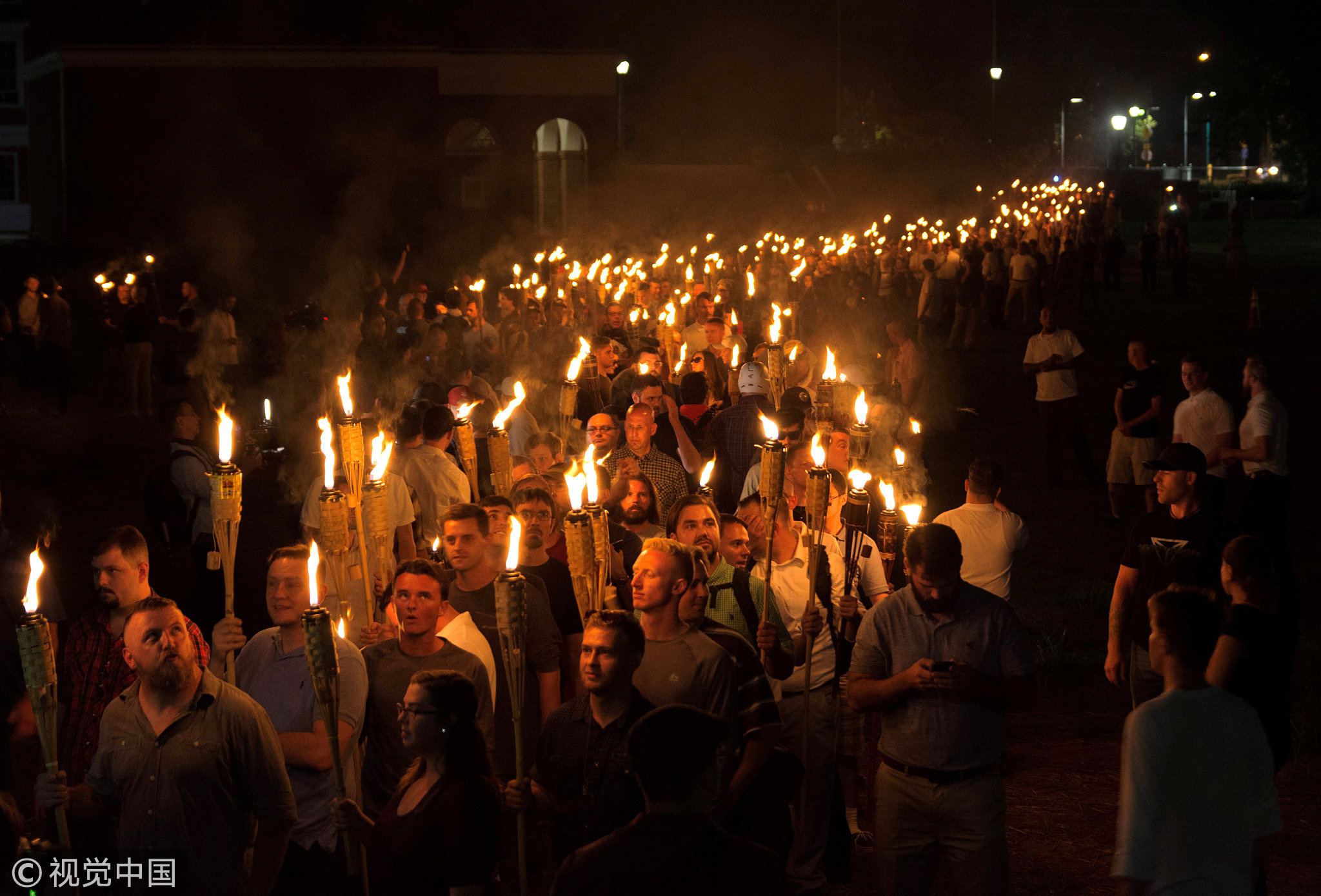 White nationalists carry torches on the grounds of the University of Virginia on the eve of a Unite the Right rally in Charlottesville, the US, August 11, 2017. /VCG Photo

White nationalists carry torches on the grounds of the University of Virginia on the eve of a Unite the Right rally in Charlottesville, the US, August 11, 2017. /VCG Photo

Ahead of the midterms, pipe bombs were mailed to a dozen high-profile Democrats, including former President Barack Obama. The gunman who stormed the synagogue in Pittsburgh reportedly shouted: "All Jews must die!"
This level of violence before elections has been unseen for decades, experts say. It also comes after a rally in Charlottesville last year where white nationalists brandished torches and did the Nazi salute.
After Charlottesville, an ABC News/Washington Post poll found 9 percent of people thought it acceptable to hold neo-Nazi views, while 39 percent said they held alt-right views.
The US has also seen some of its biggest ever protests in the past two years, as people have taken to the streets to express their discontent.

Stark divisions have also been felt closer to home, with a number of candidates having to battle an unusual foe: their own relatives. 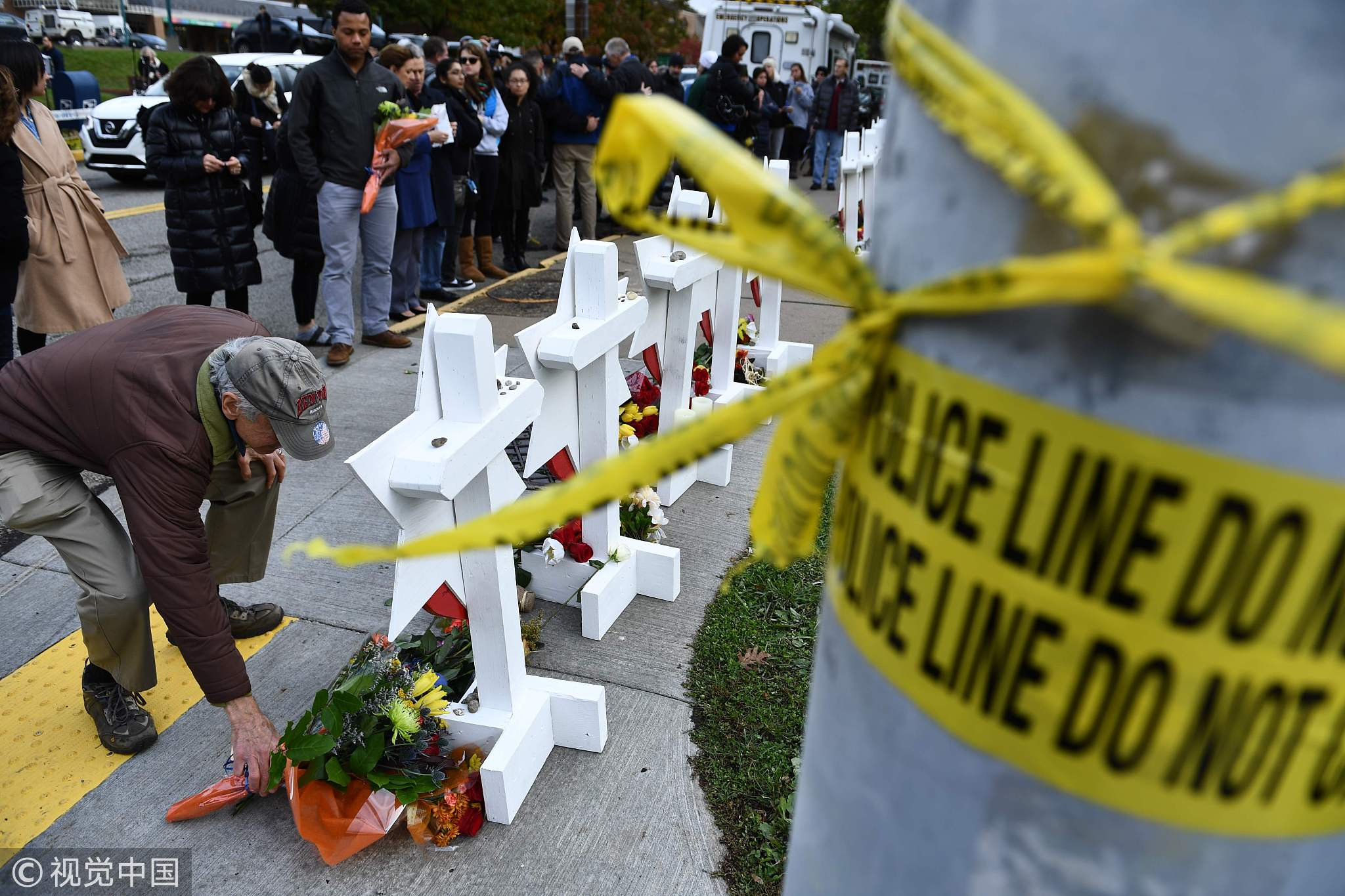 People pay their respects outside the Tree of Life synagogue in Pittsburgh, Pennsylvania, following a shooting there that left 11 people dead, October 29, 2018. /VCG Photo

People pay their respects outside the Tree of Life synagogue in Pittsburgh, Pennsylvania, following a shooting there that left 11 people dead, October 29, 2018. /VCG Photo

An Arizona campaign ad made headlines in September, featuring six siblings of Republican Congressman Paul Gosar. The twist: far from backing their brother, they stumped for his Democratic opponent.
The Gosars already openly condemned their brother last year after he defended the white nationalists in Charlottesville, writing to a newspaper: "We are aghast that Paul has sunk so low."
Responding to the latest ad, Gosar described his siblings as "leftists" and "disgruntled Hillary supporters."
He has not been alone in facing fire from his own family. Relatives of Nevada gubernatorial candidate Adam Laxalt attacked his "phoniness" and called him "the wrong choice for Nevada's governorship" in an op-ed in the Reno Gazette-Journal.
The son of Virginia Congressman Bob Goodlatte, a Republican, tweeted that he was making a large donation to the Democratic candidate seeking to replace his father. 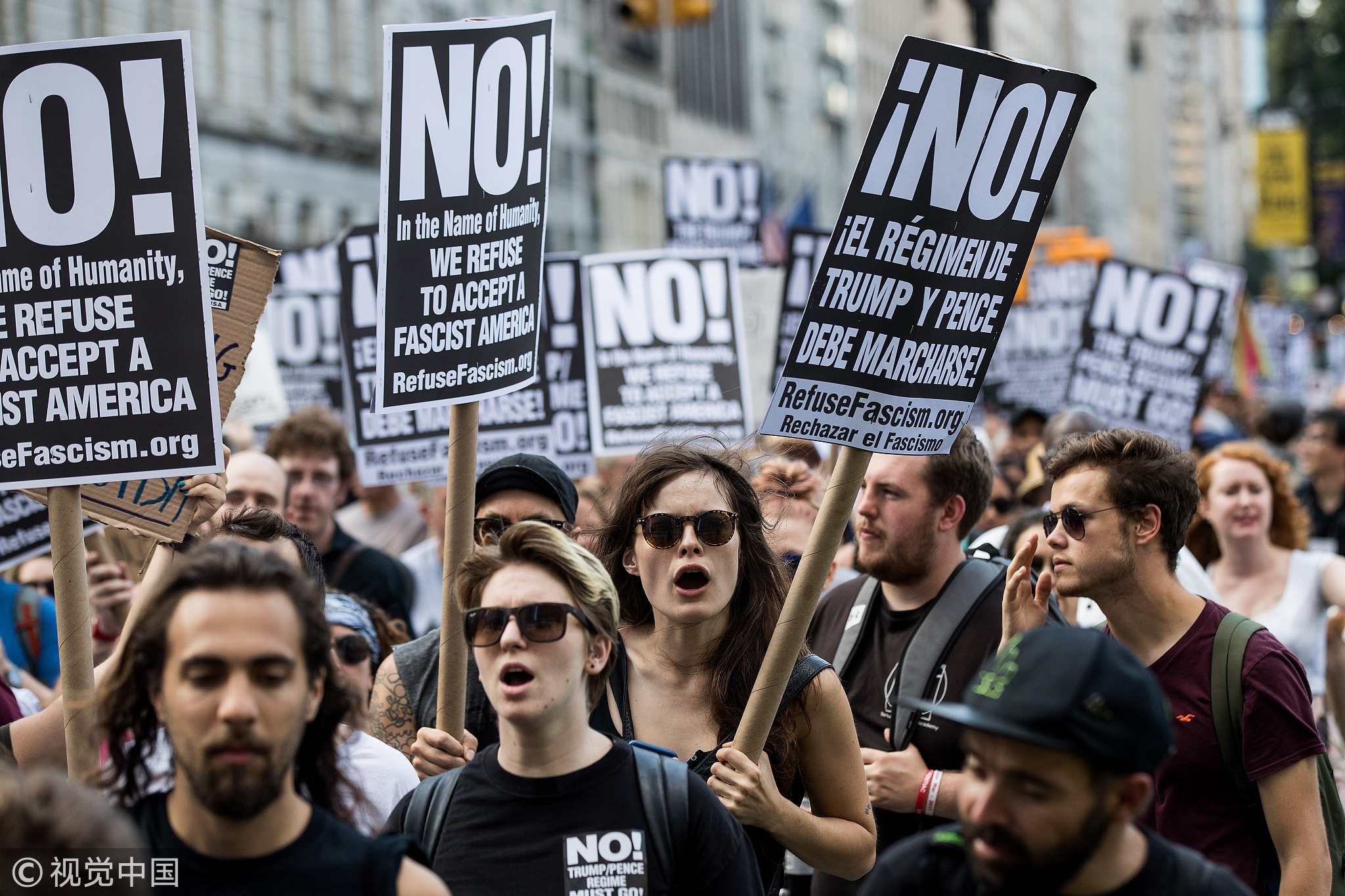 Protesters rally against white supremacy and racism in New York City, the US, August 13, 2017. /VCG Photo

Protesters rally against white supremacy and racism in New York City, the US, August 13, 2017. /VCG Photo

On the other side of the aisle, the brother of Democrat Randy Bryce, who is running for Congress in Wisconsin, emulated the Gosars by featuring in a campaign ad in support of his brother's Republican opponent.
Although common around the dinner table, political disagreements have rarely been aired so publicly or used as campaign tools.
Amid increasingly divisive rhetoric, however, people like the Gosars and Laxalts have said they need to defend their "good name" and make clear they do not stand for the same values.

US society and politics have been divided before. But not since the 1960s and 1970s – with the civil rights movement, the Vietnam War, and Richard Nixon's scandal-laden presidency – has the polarization been this intense, according to experts. 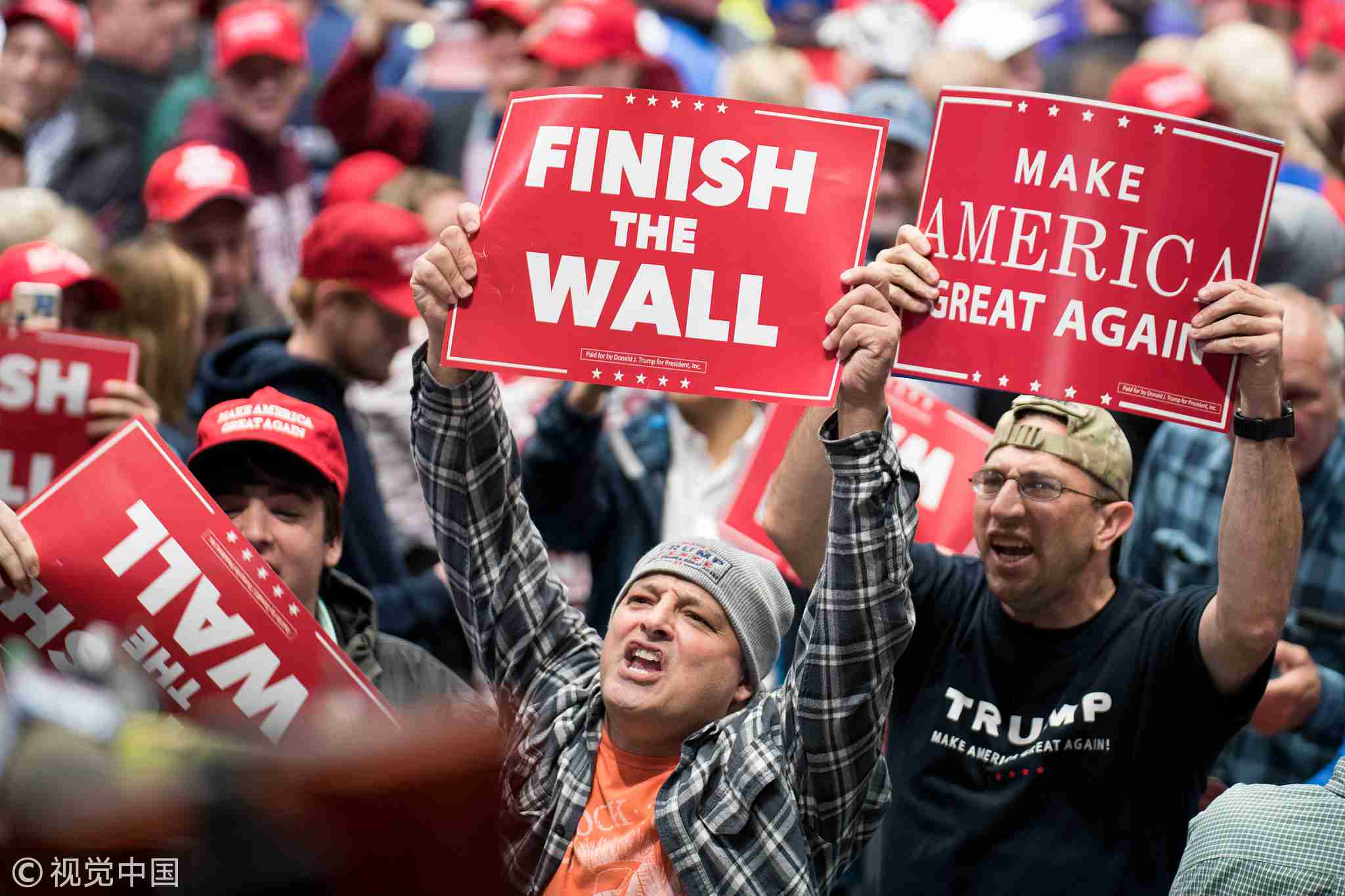 Supporters of President Donald Trump shout at the media while waiting for the president's arrival at a campaign rally in Charlotte, North Carolina, October 26, 2018. /VCG Photo

Supporters of President Donald Trump shout at the media while waiting for the president's arrival at a campaign rally in Charlotte, North Carolina, October 26, 2018. /VCG Photo

"We now live in a nation where each and every morsel of information is filtered through the lens of our divisions," Don Kusler, national director of Americans for Democratic Action (ADA), wrote in a recent op-ed.
According to Thad Kousser, a political scientist at UC San Diego who tracks polarization, it has reached a point where many Americans say they would be "upset if their child married a member of the other party, a form of tribalism that was nonexistent in 1960."
For David N. Myers, a professor of Jewish history at UCLA, a "toxic culture of vilification and demonization" has existed in US politics for a while, but Trump "has certainly stirred the pot considerably."
Now these divisions are likely to be seen all the way to the polling station.
With Democrats likely to retake the House on Tuesday and Republicans expected to confirm their dominance in the Senate, the US looks set for a political system as divided as the rest of the country for the near future.
(Top picture: Demonstrators hold signs and shout during a rally outside Trump Tower in New York, August 14, 2017. /VCG Photo)