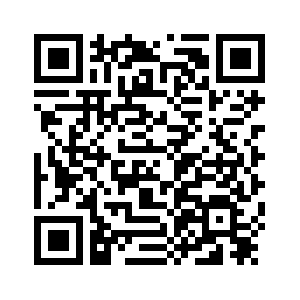 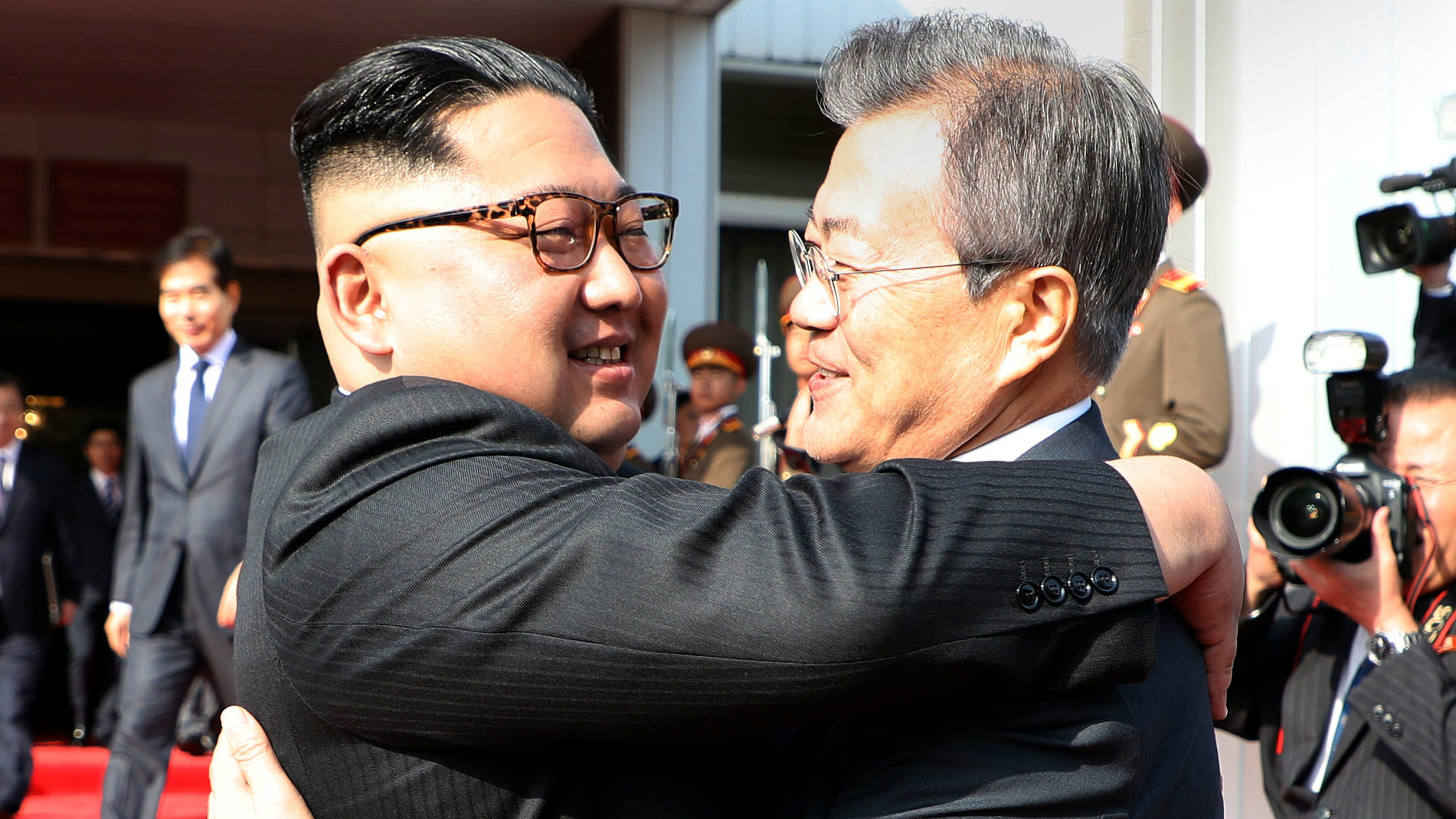 A summit to break US-DPRK stalemate?

The third inter-Korean summit this year comes at a crucial time. Despite rapprochement between Pyongyang and Seoul following the Panmunjom summit on April 27 and all parties' pledge to strive for denuclearization on the Korean Peninsula, talks between the United States and the DPRK appear to have reached an impasse.
US President Donald Trump called off a planned visit to the DPRK by Secretary of State Mike Pompeo late last month, citing a lack of "sufficient progress" in denuclearization talks. 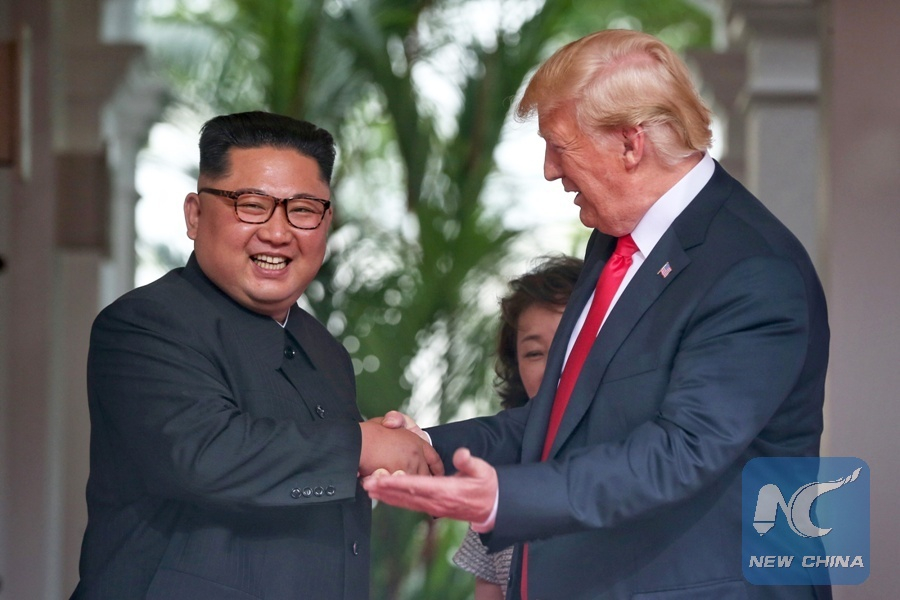 Washington demands more serious steps by Pyongyang to abandon its nuclear arsenal, though the latter has started dismantling its nuclear and rocket engine testing sites. On the other hand, the DPRK expects the US to take some corresponding measures such as easing sanctions and jointly declaring an end to the 1950-53 Korean War. Neither side seems ready to make further compromises at the moment.
The upcoming Kim-Moon summit offers an opportunity to help bridge the gaps between Washington and Pyongyang on denuclearization. Speaking at a cabinet meeting last week, the ROK president said both Trump and Kim had asked him to play the role of a mediator. He stressed the summit must lead to another "big step" toward denuclearization and urged the American and DPRK leaders to think broadly and "make bold decisions."
"North Korea (The DPRK) must carry out its nuclear dismantling and the United States must take a corresponding step," Moon said. "Under such a process, the two countries must pull back their deep-rooted mutual distrust caused by their 70 years of hostile relations." 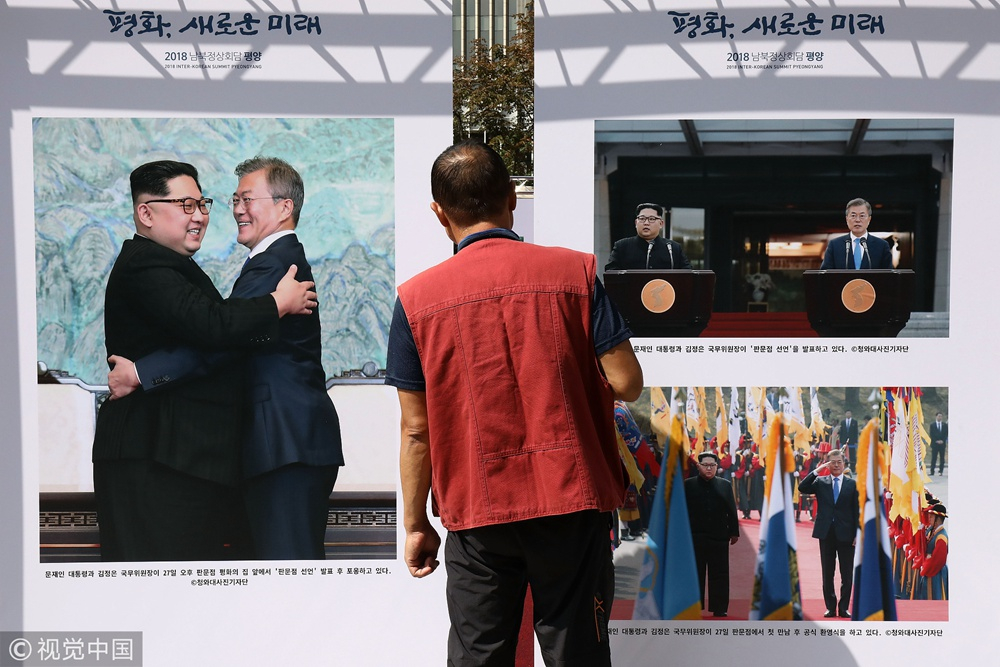 Denuclearization will be a key issue at the summit, Moon's chief of staff Im Jong-seok said at a press conference on Monday.
The summit will focus on three major topics: improving inter-Korean relations, mediating US-DPRK talks, and reducing military tensions and ending the threat of war on the peninsula, according to Im.
In a recent analysis, Kim Tong-hyung of the Associated Press said the ROK president faces his "toughest challenge yet" at his third summit with the DPRK leader. The author noted that Moon is expected to deliver "something substantive that goes beyond previous vague statements on denuclearization" and help get US-DPRK talks back on track.
Whether the summit will result in the resumption of "genuine talks" between Washington and Pyongyang expected by Moon is far from certain, but reports that the White House is planning another Trump-Kim meeting indicate that talks are still going on. 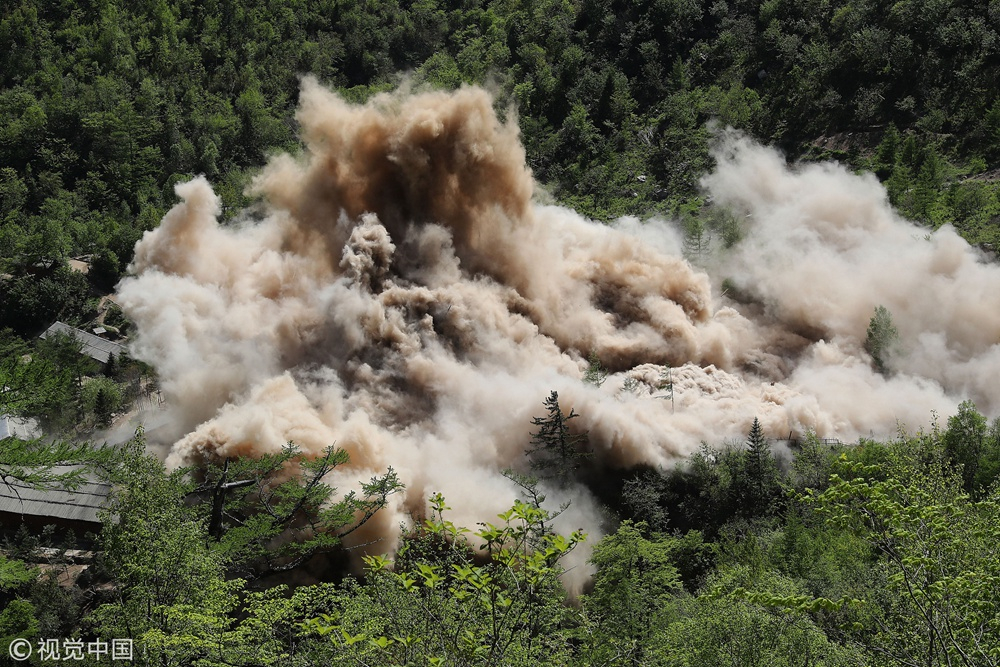 The Punggye-ri nuclear test site is demolished in Punggye-ri, DPRK, May 24, 2018. /VCG Photo

The Punggye-ri nuclear test site is demolished in Punggye-ri, DPRK, May 24, 2018. /VCG Photo

Commenting on the upcoming summit, Chinese Foreign Ministry spokesman Geng Shuang said on Monday that China hopes the summit can achieve positive outcomes and that "the upcoming summit could further strengthen inter-Korean coordination and interaction, maintain and consolidate the momentum for detente on the peninsula and continue to promote the positive role of the political ways of settling Korean Peninsula issues".

The first summit in Pyongyang since 2007

Although it's the third summit between Kim and Moon this year, it will be the first time for them to meet in Pyongyang. In fact, Moon, whose parents fled to the ROK from the north during the Korean War, will be the first ROK president to visit the DPRK's capital since 2007.
Unlike the one-day summits in the border village of Panmunjom on April 27 and May 26, the Pyongyang summit will last two and a half days.
00:35 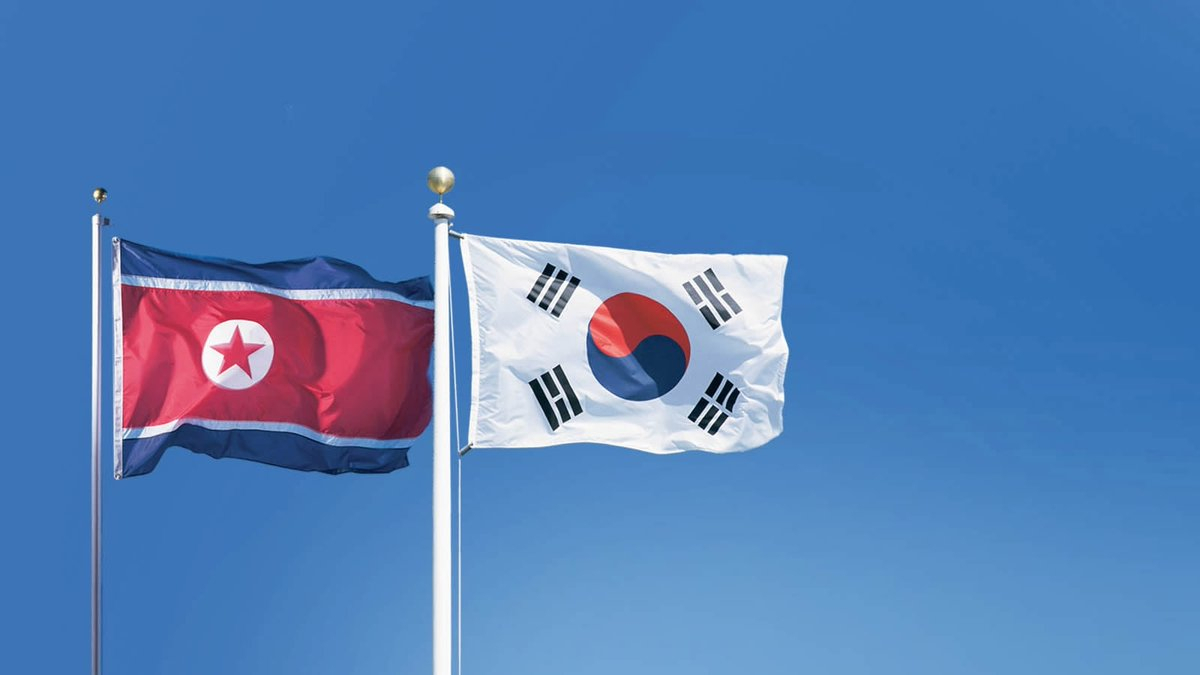 According to Im, Moon is scheduled to arrive in Pyongyang on Tuesday morning, meet with Kim after lunch, watch a performance, and attend an official welcome dinner; on Wednesday, the two leaders will hold their second meeting and attend a joint press briefing in the morning, and tour around some DPRK facilities after lunch; Moon will fly back to the ROK on Thursday morning.
In an article published one day before the summit, Pyongyang's state media emphasized peace and prosperity between the two Koreas and called for efforts to build on the achievements they have made since the April 27 meeting.
"The north and the south should actively open the new history of peace, prosperity and reunification by gathering power and wisdom and cherishing the achievements made on the way toward implementing the Panmunjom Declaration," the Rodong Sinmun said.
01:34 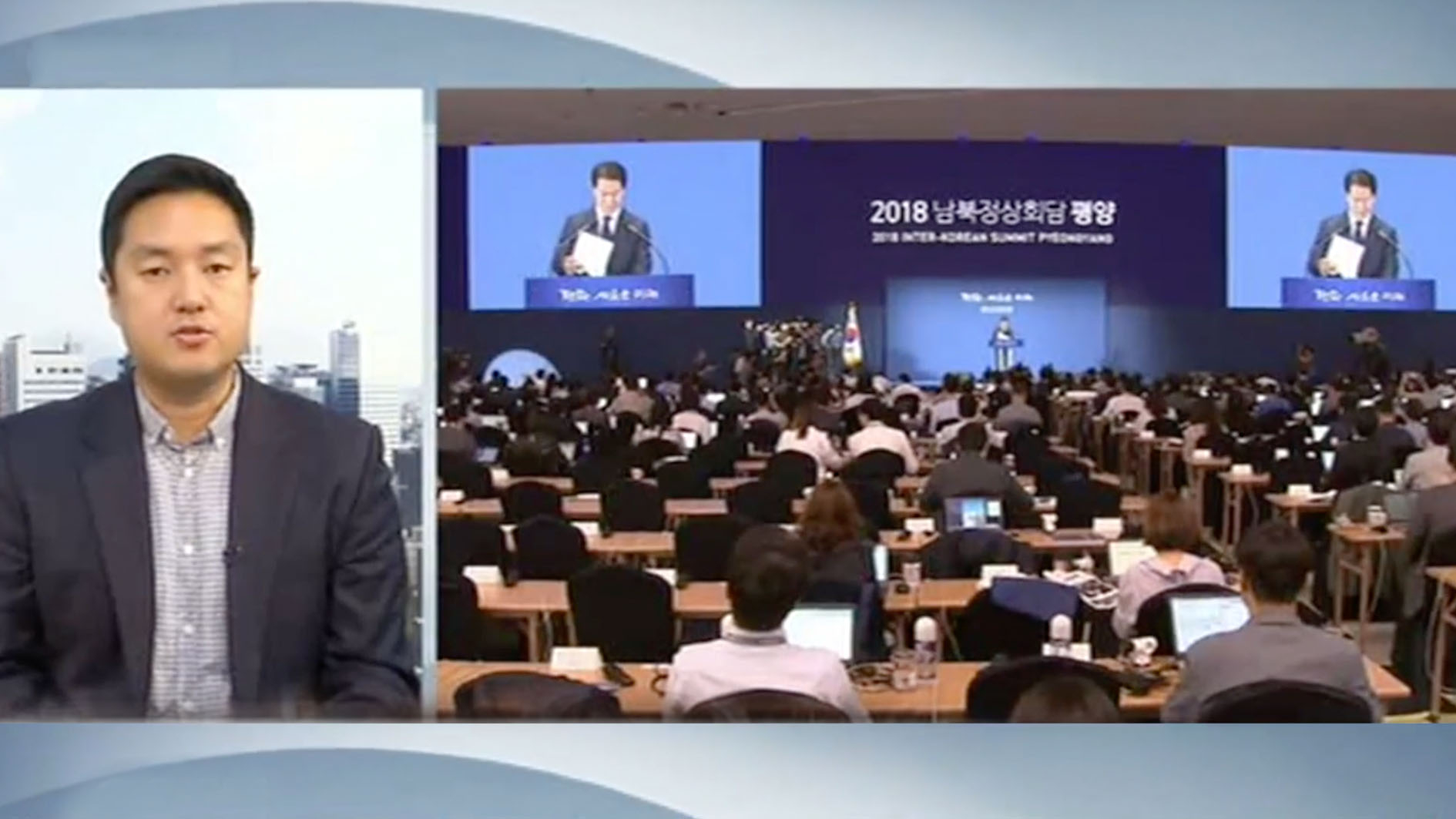 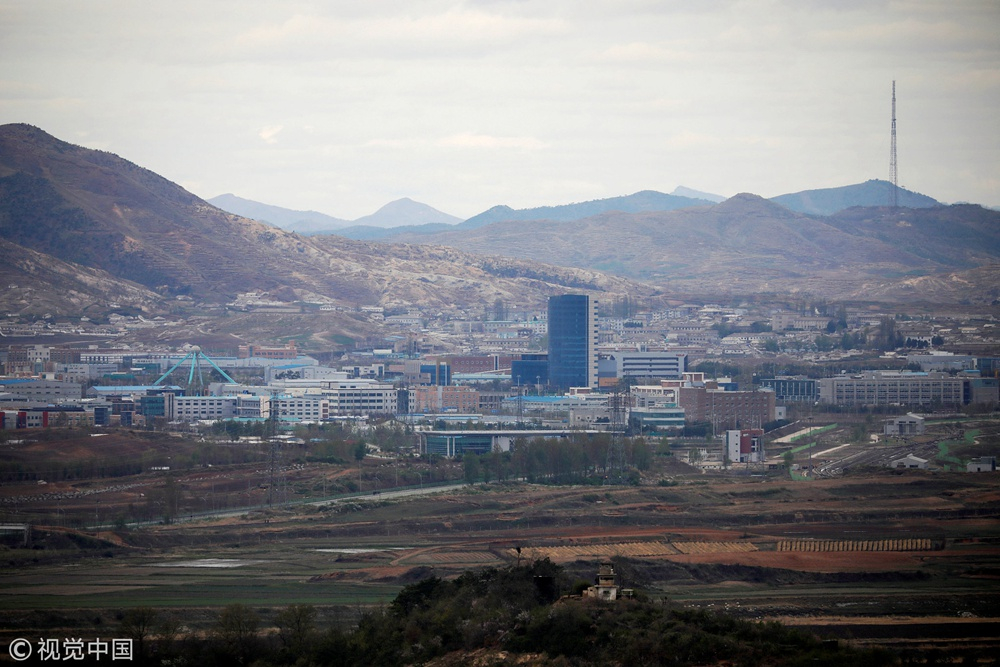 The inter-Korean Kaesong Industrial Complex, which is still shut down, is seen in this picture taken from the Dora Observatory near the demilitarized zone separating the two Koreas, in Paju, ROK, April 24, 2018. /VCG Photo

The inter-Korean Kaesong Industrial Complex, which is still shut down, is seen in this picture taken from the Dora Observatory near the demilitarized zone separating the two Koreas, in Paju, ROK, April 24, 2018. /VCG Photo

"President Moon will persuade Mr. Kim to have the determination to abandon their nuclear weapons and cooperate in the right way with the US during the summit in Pyongyang. Of course, he doesn't come empty-handed," Wang wrote in a commentary for CGTN.
"The promise of financial aid and economic cooperation will be made," he added. "The matter is whether the DPRK's young leader believes it or not."
Other members of the ROK delegation include presidential staff, cabinet ministers, local government officials, religious leaders, labor activists, women's rights activists, musicians, retired sports stars and journalists.
Former football star Cha Bum-kun, who advocates a plan for a World Cup jointly hosted by the two Koreas in 2034, and Hyun Jung-hwa, who was a member of the joint Korean team at the 1991 World Table Tennis Championships, will head to Pyongyang, alongside rapper Zico, pop singer Ailee and composer Kim Hyung-suk.
(Top video by Xu Haoming)
809km