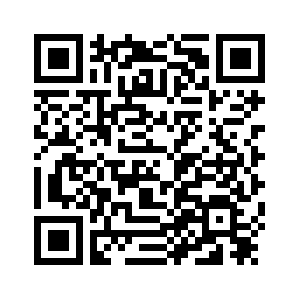 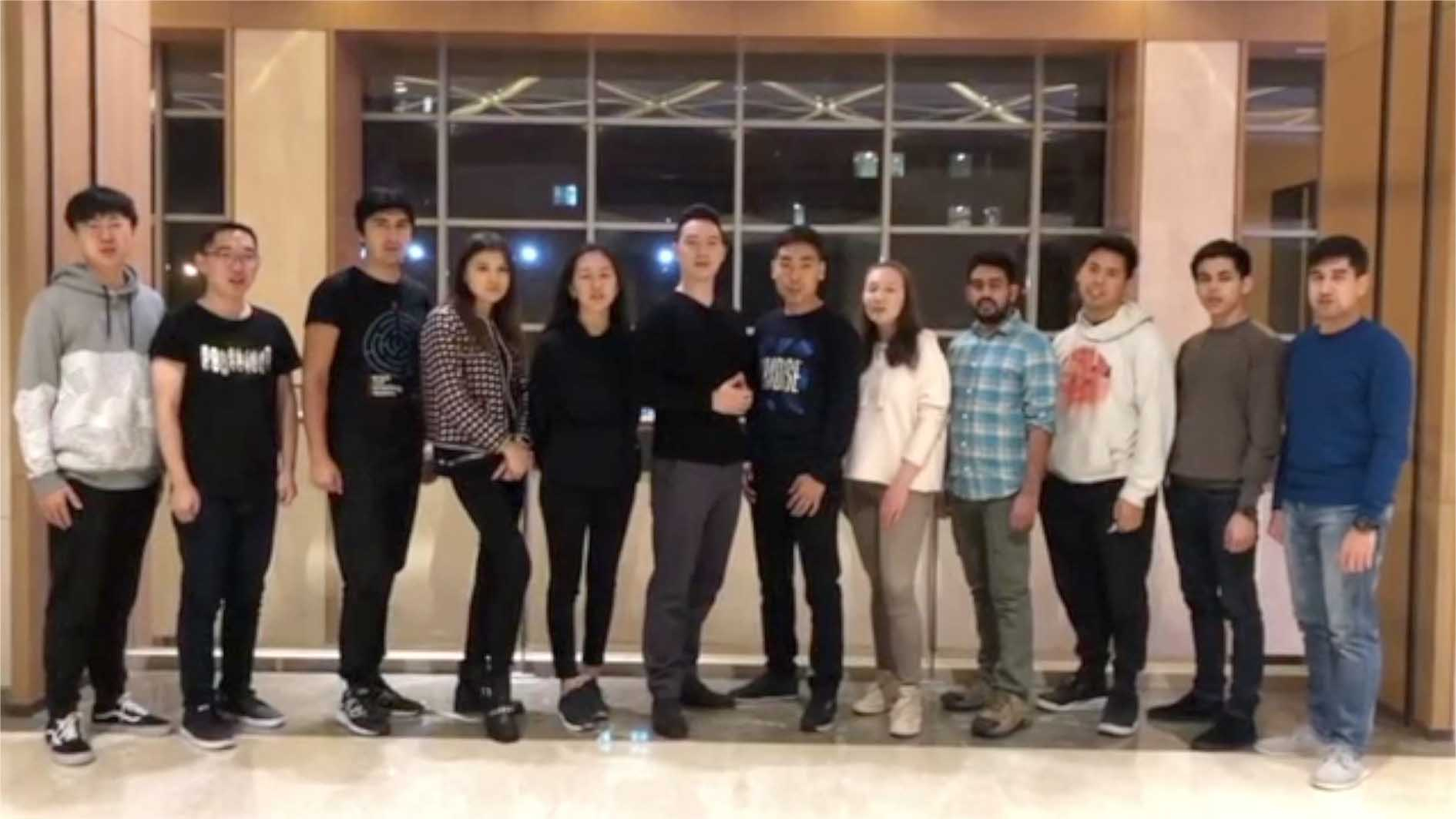 ‍The SCO Countries Youth League, recently also branded as SCOLAR, is set to make a strong pitch against the global threats of terrorism and extremism, as it convenes the SCO Countries Youth Representatives Assembly in Dongfang City in China's southernmost Hainan Province from November 9 to 11.
SCOLAR has also released a multi-lingual video campaign proclaiming that "Generation SCO is against terrorism and extremism" in the lead up to the youth assembly that's being jointly organized by the Shanghai Cooperation Organization (SCO) Secretariat in Beijing and the current rotating president of the SCO Youth Council, Kyrgyzstan.
"The three-day event will gather around 100 delegates, young leaders and volunteers from SCO member states as well as the observer and dialogue partner countries," SCOLAR co-founder Olim Alimov told CGTN Digital. 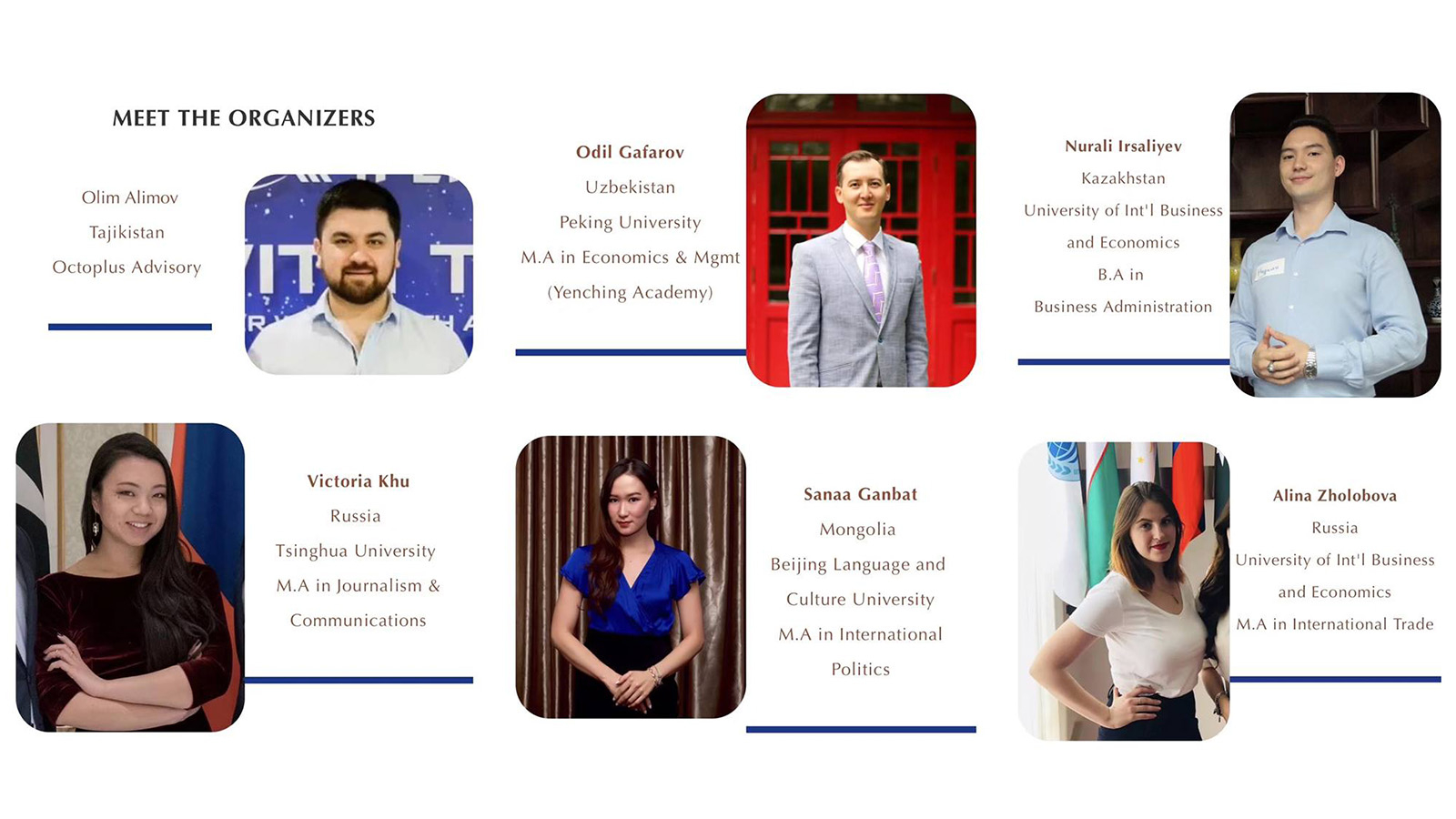 Members of the organizing team for the SCO Countries Youth Representatives Assembly. /Photo via SCOLAR

Members of the organizing team for the SCO Countries Youth Representatives Assembly. /Photo via SCOLAR

Related story: Model SCO conference to bring youth agenda on the center stage
"The youth assembly was inspired by the historic SCO Summit in Qingdao, China, in June this year where top leaders made a joint address toward the youth underlining the importance to stand against terrorism and extremism," said the Tajik national, who's also heading the organizing team for the conclave.
The Hainan event will bring together two of SCOLAR's flagship programs – "Model SCO" youth conference and "Leader of the 21st Century" contest – over the next three days. In addition, the assembly will also feature a plenary session, a joint meeting of SCO youth representatives besides holding a range of sports, cultural and recreational activities.
The content of these programs will highlight our strong and emphatic opposition to the menace of terrorism and extremism and propose ways to deal with them through positive and constructive means, Olim said, adding that "We believe that taking part in this unique event is the first step in the right direction."
02:59 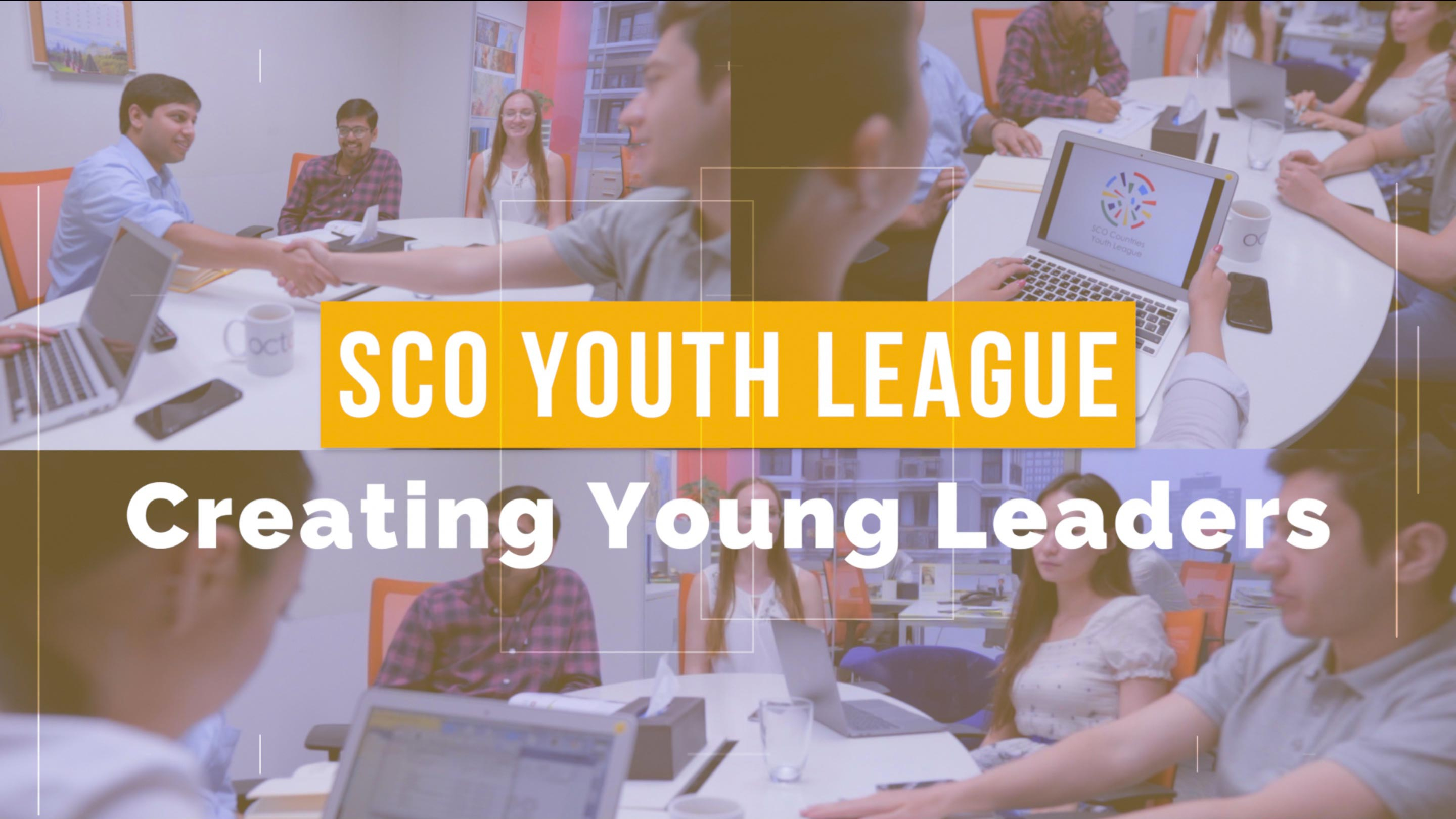 Related story: SCO youth league looks to expand footprints with more international hubs
The SCOLAR co-founder said he hoped to get support "from the entire SCO family and raise more awareness to not only fight this common enemy but to create preventive measures so that the youth which constitutes one-third of the population of our region, never even have to think about that path."
"It is within our ability to build a new narrative and we hope that the entire global community can gather together to say NO to terrorism and extremism," Olim added emphatically.
The SCOLAR's initiatives were supported during the SCO heads of government meeting in Tajikistan's capital Dushanbe in October as well as at the subsequent meeting of the SCO education ministers in Astana, Kazakhstan.

'Learning from the leaders' 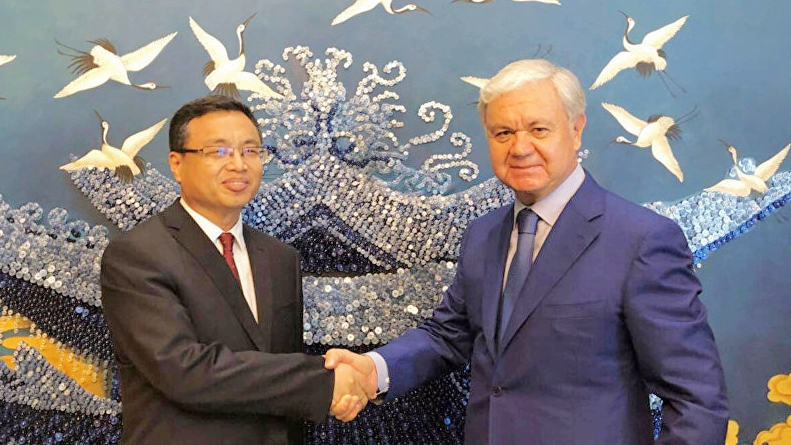 Related story: Rashid Alimov: A coming-of-age story of the largest Eurasian consortium
SCO Secretary-General Rashid Alimov will deliver a keynote address at the plenary session on Friday.
"The holding of the SCO youth assembly in Dongfang City will become a large-scale event, called on to facilitate the practical implementation of the organization's youth policy, charted by the leaders of SCO member states at their summit in Qingdao," Alimov had said in late September after holding talks with Dongfang City administration about organizing the event.
The assembly will also include statements from representatives of SCO Youth Council, Ministers, SCO Antiterrorism Structure Head, the United Nations, local government heads and many other distinguished officials.
01:59 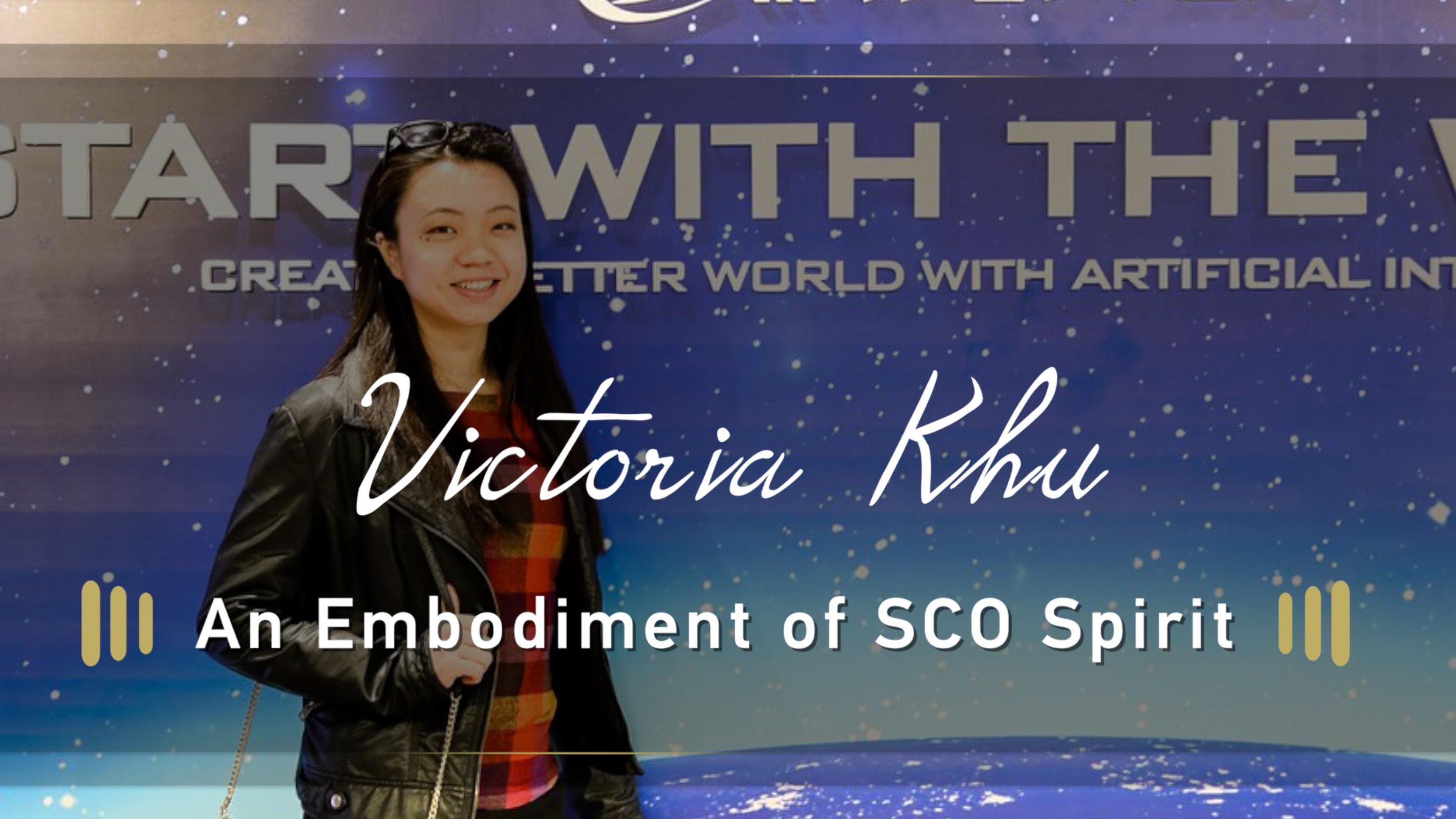 Related story: This Russian-born Chinese woman personifies the SCO spirit
SCOLAR co-founder Victoria Khu will deliver a speech highlighting the importance of building grassroots organizations to cater to a positive message of education, culture, science, and technology.
"We will share our stories to demonstrate a positive influence of SCOLAR locally as well as our plans to build regional and city hubs across SCO countries," said Khu.
"We are affiliated with the SCO Secretariat and we take part in a lot of their events. We've been really lucky to have active support from the SCO Secretary-General Rashid Alimov. In fact, he has given the members of the youth league a new name – "Generation SCO", the Russian-born Chinese youth leader had earlier told CGTN Digital.
"We want the Generation SCO to be connected, and to be connected from a very young age. And in the future, I believe this will lead to more productive cooperation between the SCO countries," she added.
03:20 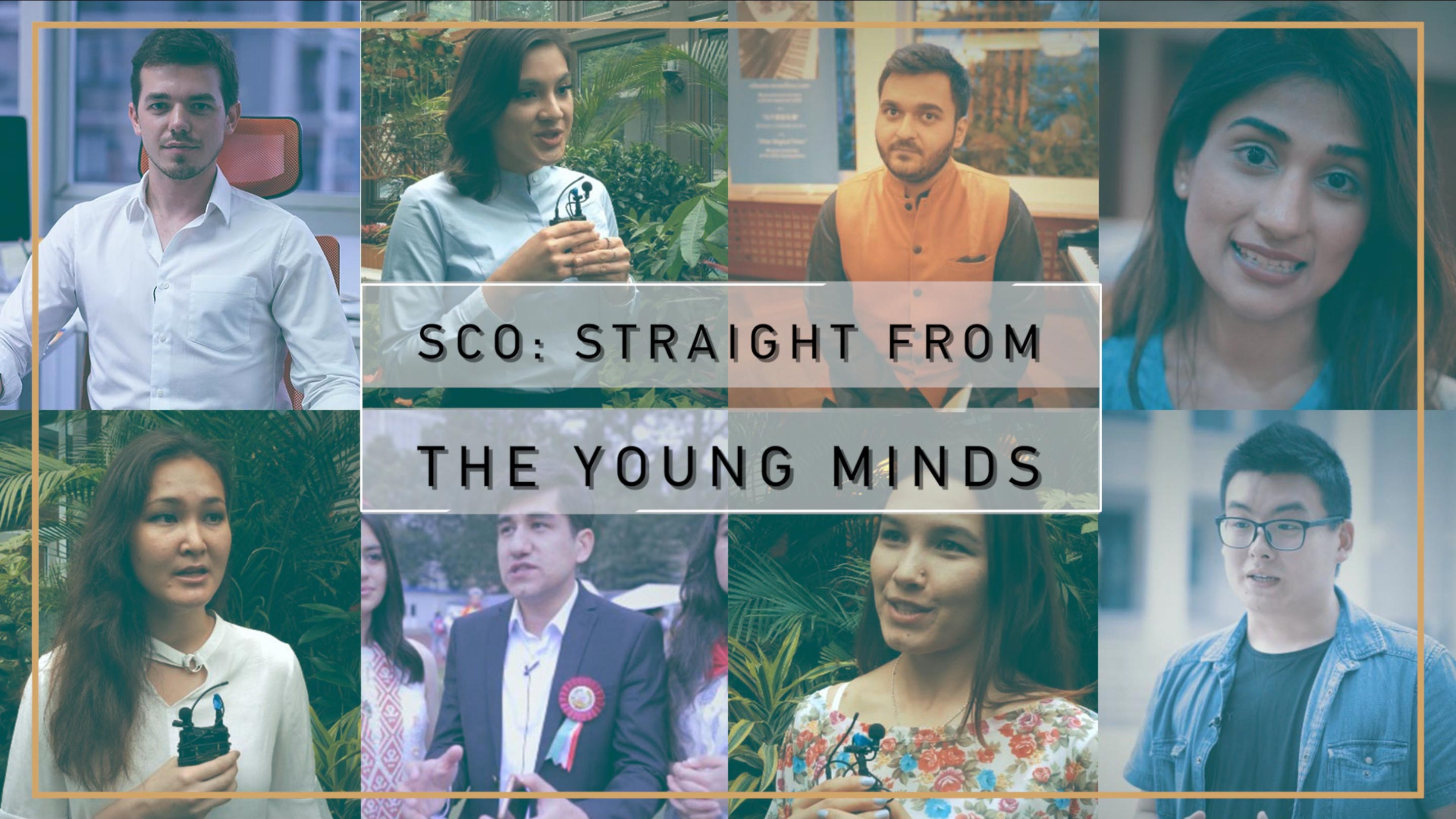 Related story: SCO's young talents brim over with enthusiasm ahead of Qingdao summit
Emphasizing that the Hainan conclave will provide SCOLAR a unique opportunity to spend time and learn from the SCO leaders, Olim said: "Even though we have the luxury of having direct access to the SCO Secretariat we very much value a rare opportunity to engage with representatives of the Youth Council who are doing a fantastic job for the SCO by setting up a very positive agenda for the youth."
"We are also going to utilize the given opportunity to learn from their experiences to better our projects and programs," he added.
A jubilant SCOLAR member and Uzbek national Odil Gafarov, who's also a part of the organizing team, said: "First time in the history of SCO, the young generation is officially replying to SCO leadership's message! And an entire conference is organized by few young people including me."
"We firmly believe that only through the promotion of our true values we can reach our peers' hearts and minds to turn away from destructive forces and turn to constructive dialogue and deeds," Olim concluded.
(Cover photo: SCOLAR has released a multi-lingual‍ video campaign proclaiming that "Generation SCO is against terrorism and extremism" in the lead up to the SCO Countries Youth Representatives Assembly. /Video courtesy: SCOLAR)
2432km