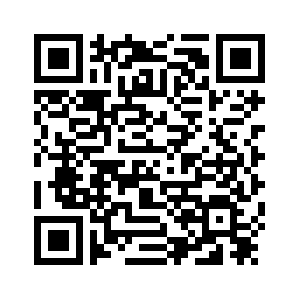 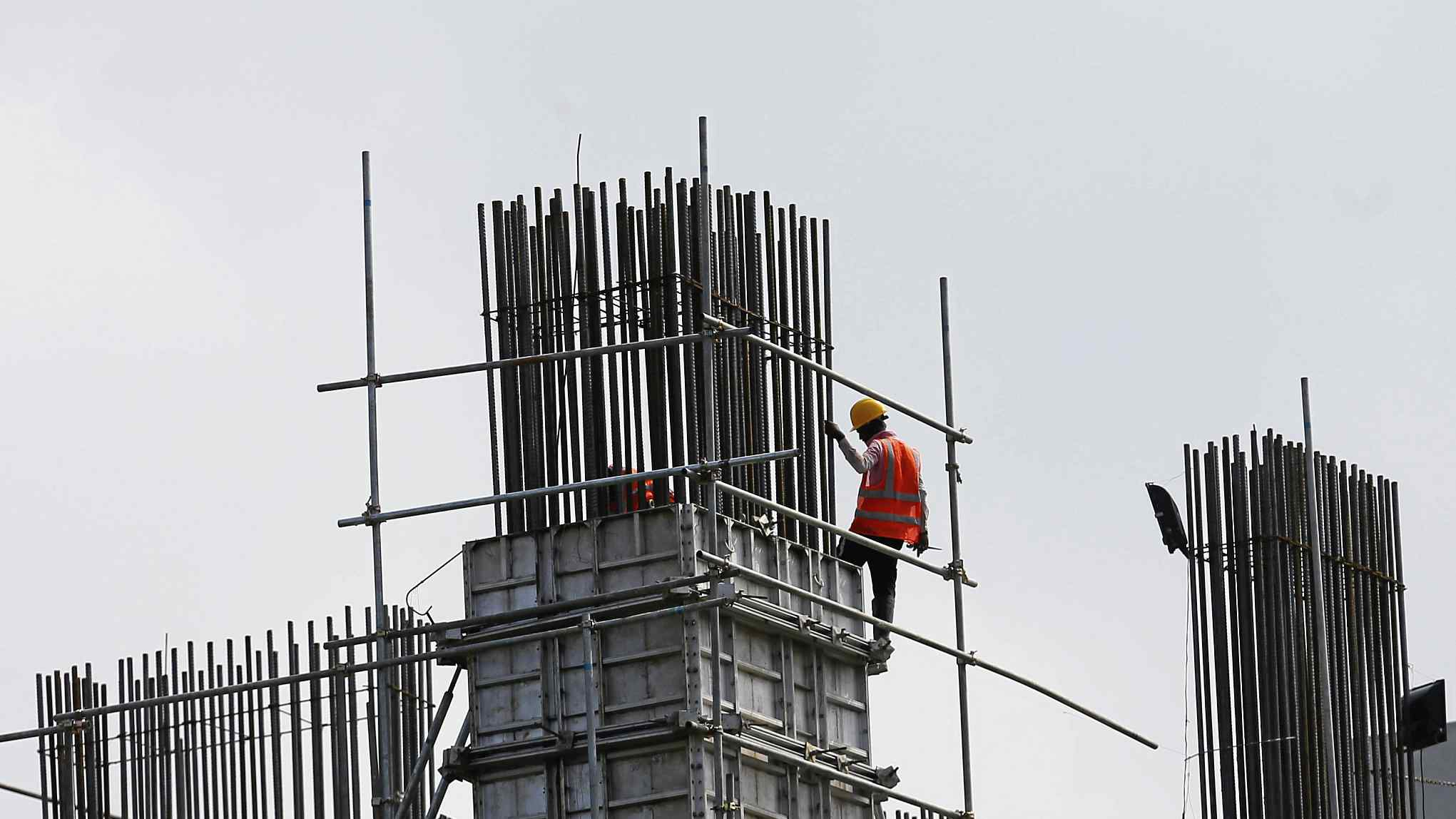 Editor's note: Feng Da Hsuan is a chief adviser to the China Silk Road iValley Research Institute and former vice president for research at the University of Texas at Dallas, and Liang Haiming is the chairman of the China Silk Road iValley Research Institute and a visiting scholar at Princeton University. The article reflects the authors' opinion, and not necessarily the views of CGTN.
In recent months, we saw a crescendo of articles claiming that the projects of the China-proposed Belt and Road Initiative (BRI) are making enormous loans to countries, especially to developing ones. Those "debt traps", the narrative goes, aim to make these countries subservient to China in a "neo-colonial" fashion.
While it is certainly true that Chinese loans were indeed extended to many countries, it is important and interesting that the discussion of this issue be real and comprehensive rather than fragmented and politically colored.
It is important that we let data manifest the real situation.
Between 2000 and 2016, China's loans to African countries amounted to a mere 1.8 percent of Africa's total external debt. In fact, such loans were primarily concentrated in infrastructure construction. With such data in mind, the heavy debt incurred by African countries is not and cannot be primarily due to China.
It is also worth examining the debt crises in South Asia, namely Pakistan and Sri Lanka, the two countries that are often mentioned in either Western media or public discussions. Pakistan and China initiated the China Pakistan Economic Corridor (CPEC), an infrastructure project under the BRI.
According to official data from Pakistan, among the incurred foreign debt of the country due to CPEC, loans from China amounted to about 10 percent, while the remaining 90 percent of the debt comes either from Western countries, the United States and European nations for example, or international financial institutions, such as the World Bank, International Monetary Foundation, Asian Development Bank among others.
Furthermore, it is especially worth noting that the Chinese preferential loan interest rate to Pakistan is only about two percent, which is far lower than the loan interest rate offered by Western countries to Pakistan and also far lower than the Chinese domestic loan interest rate (six to seven percent).
Likewise, in Sri Lanka, many BRI projects have broken ground, such as the construction of the Hambantota port. According to Sri Lanka's Central Bank statistics, Chinese loans only account for about 10 percent of Sri Lanka's external debt in 2017, of which 61.5 percent were concessional loans below international market interest rates. Thus, just as the situation in Pakistan, it is clear that loans from China do not constitute a major burden on Sri Lanka's external debt. 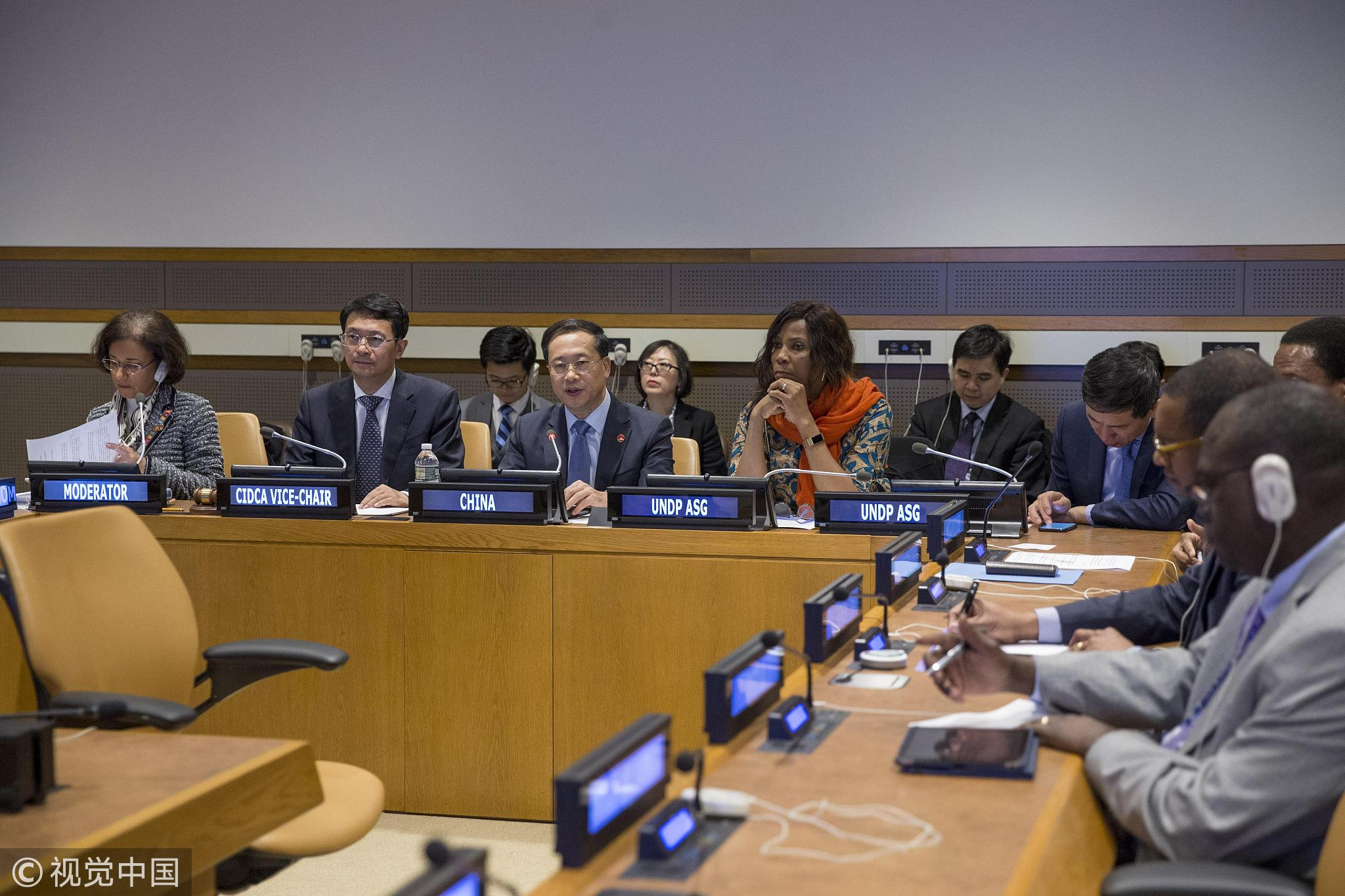 A study on China's Assistance to African Agriculture Project was published during a meeting at the United Nations Headquarters in New York, US, October 29, 2018. /VCG Photo

A study on China's Assistance to African Agriculture Project was published during a meeting at the United Nations Headquarters in New York, US, October 29, 2018. /VCG Photo

The debt issue of some developing countries, as we can see from the data, is not necessarily related to BRI projects.
In fact, many of these countries had incurred high debts before the BRI was even conceived. Some have had a heavy debt burden mainly because of long-term loans from other countries, such as the aforementioned Western countries and international financial organizations. In this arena, China is a latecomer and certainly, according to data, it is not the biggest creditor.
Published statistics seem to tell us something else about the BRI projects. According to the international standard for assessing whether foreign investment is effective depends on whether this investment brings new technologies, new employment opportunities, and promotes economic development.
According to a 2017 report by McKinsey's, more than 1,000 Chinese companies in eight African countries surveyed reported that an average of 89 percent of their workforce are African natives. China has created millions of jobs to Africa. 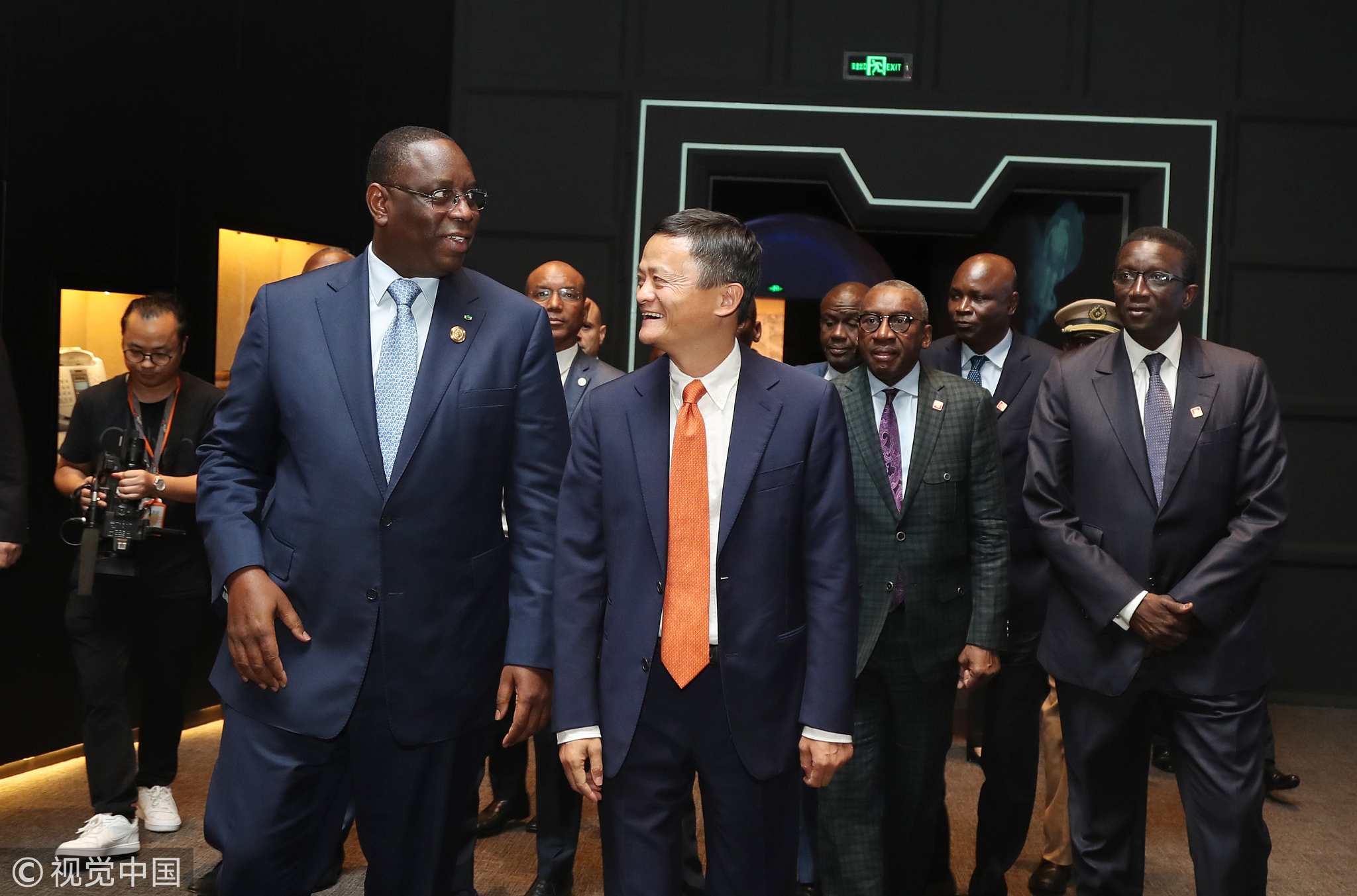 Furthermore, two-thirds of Chinese companies provide training for locals, half offer internships, and one-third of them have introduced new technologies to local communities.
Another interesting example is the Mombasa–Nairobi Standard Gauge Railway construction project. According to data published by the Kenyan government, this project boosted Kenya's economic growth by 1.5 percentage points.
China has trained more than 5,000 professional and skilled workers in Kenya and created 46,000 jobs. After the completion of the Munne Railway, the cost of cargo transportation plummeted by nearly 80 percent, and the project significantly enhanced the development and prosperity of areas along its route.
Such information demonstrates that China's investment did not bring debt problems to BRI countries, but instead has successfully promoted the economic development of BRI countries and created many employment opportunities.
It is worth underscoring that China has always attached great importance to strengthening debt management for joint projects and investment cooperation in BRI countries. 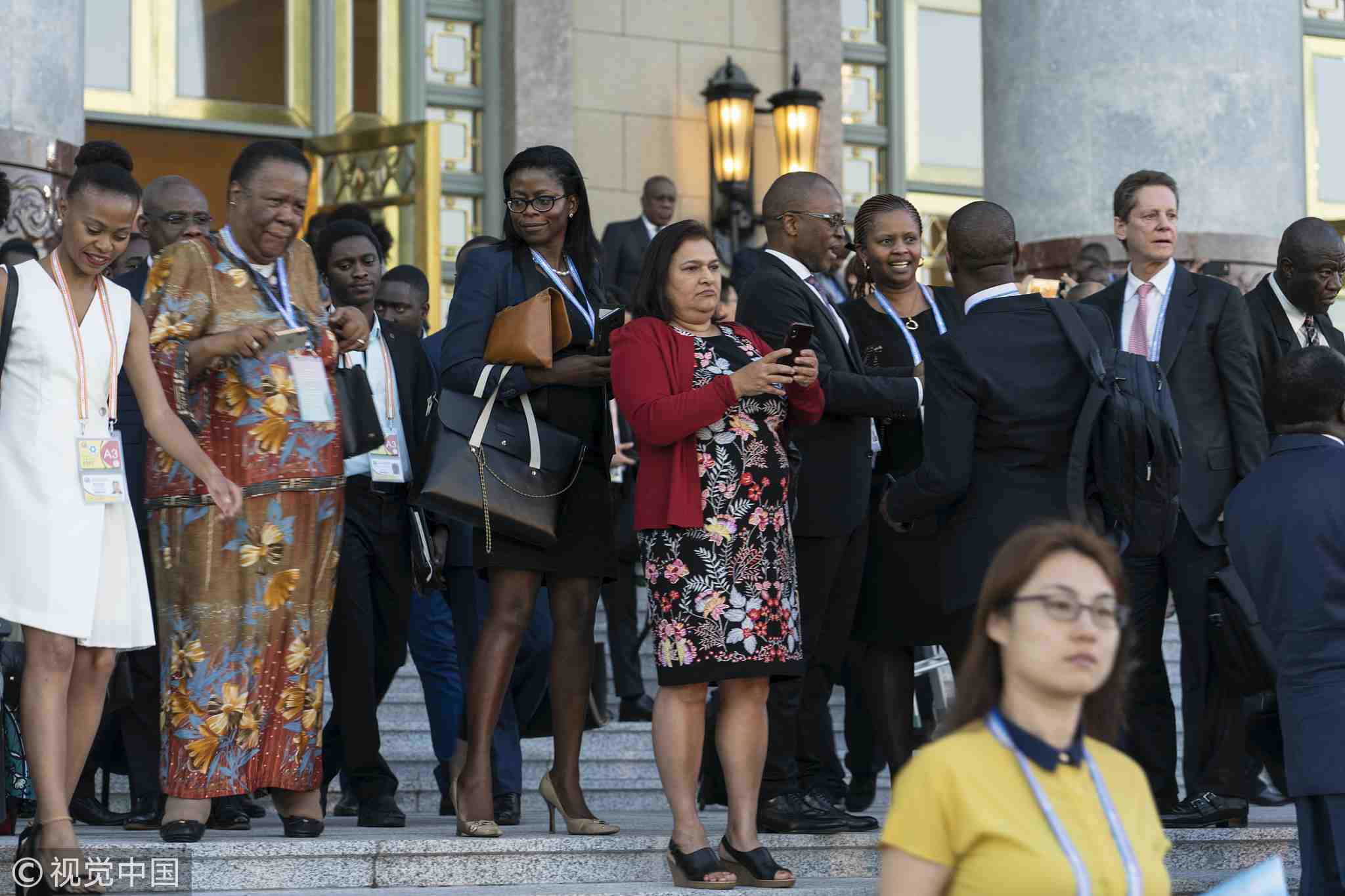 Participants attending the China-Africa Cooperation Forum take a group photo in front of the Great Hall of the People, September 3, 2018. /VCG Photo

Participants attending the China-Africa Cooperation Forum take a group photo in front of the Great Hall of the People, September 3, 2018. /VCG Photo

Regarding the issue of investment and financing of BRI projects, as far as we can ascertain, China has strictly adhered to economic efficiency, provided loans in accordance to the real and practical conditions of the country involve, supported the project in all possible manner, and tried best to avoid creating new debt risks and financial burdens for the countries involved.
Indeed, the standard of operation (SOP) of China in loaning funds for projects such as those by BRI is that prior to providing financing, the borrower's debt situation and solvency must be carefully evaluated and measured.
In the post-loan period, the borrower's risk and sovereign risk will be monitored and tracked continuously. For example, the development bank will establish a national sovereign credit rating for the country. The Industrial and Commercial Bank of China, CITIC Insurance and other institutions have also established relevant assessment and monitoring management systems.
Now the question is, since both the West and China offer loans, why are the former's loans sweet "pies" while the latter's "debt traps"? This is certainly a very interesting question begging closer examination.
To summarize, in the past two decades, the Chinese GDP grew a whopping 1,200 percent. In this respect, China is simply a "new kid on the block" in making loans to other nations. With BRI in full swing, there's much room for China to improve in the arena of international investment.
Since the global welfare is closely linked to how the money flows from one nation to the other, therefore the so-called "debt traps", which are forever something to be concerned about, should and must be regarded more with economic than political perspective. The ultimate judgment should be based almost entirely on analyzing real and reliable data and not through the prism of politics.
(If you want to contribute and have a specific expertise, contact us at opinions@cgtn.com.)