China: 'Big hope' for ski industry but can it win Olympic gold?
By Sim Sim Wissgott 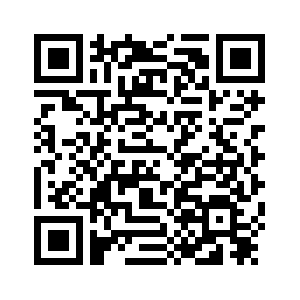 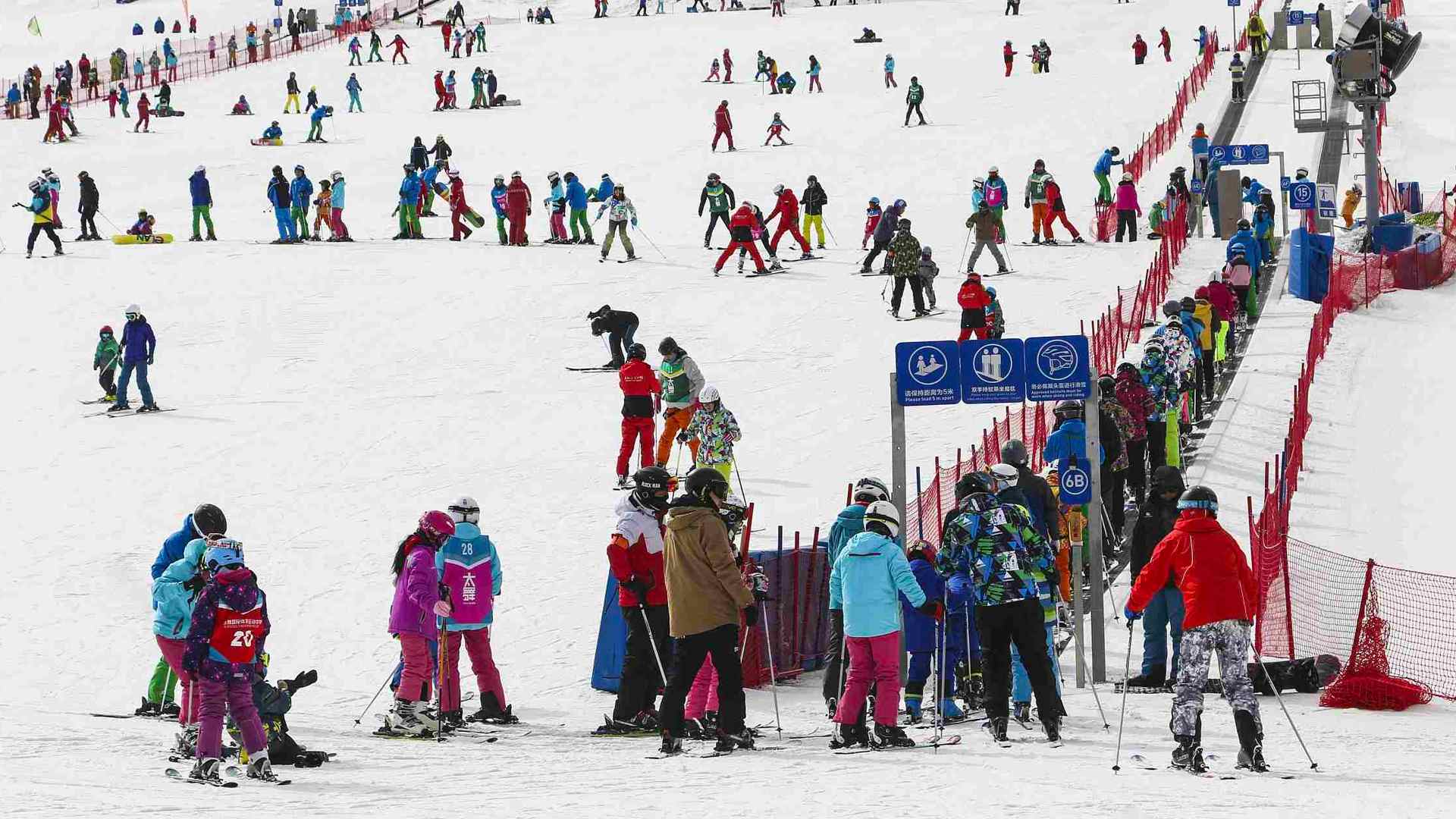 When Beijing won the bid to host the 2022 Winter Olympics, Chinese President Xi Jinping set the goal of attracting 300 million people to winter sports over the next few years.
Ski resorts in provinces like northern Hebei and northeastern Jilin have multiplied, and foreign ski manufacturers have been rubbing their hands at the prospect of a huge new market opening up to them.
But how does China compare to traditional ski destinations in Austria, Switzerland, Canada and the U.S., and with Olympics around the corner, can it ever hope to eclipse these nations on the slopes?

On a February weekend at Thaiwoo Ski Resort, a four-hour drive from Beijing, the service center bustles with activity as skiers and snowboarders gather their equipment – in Chinese resorts, it is possible to rent everything from skis and boots to suits, helmets and even goggles – while an instructor makes a group of children do jumping jacks to warm up. 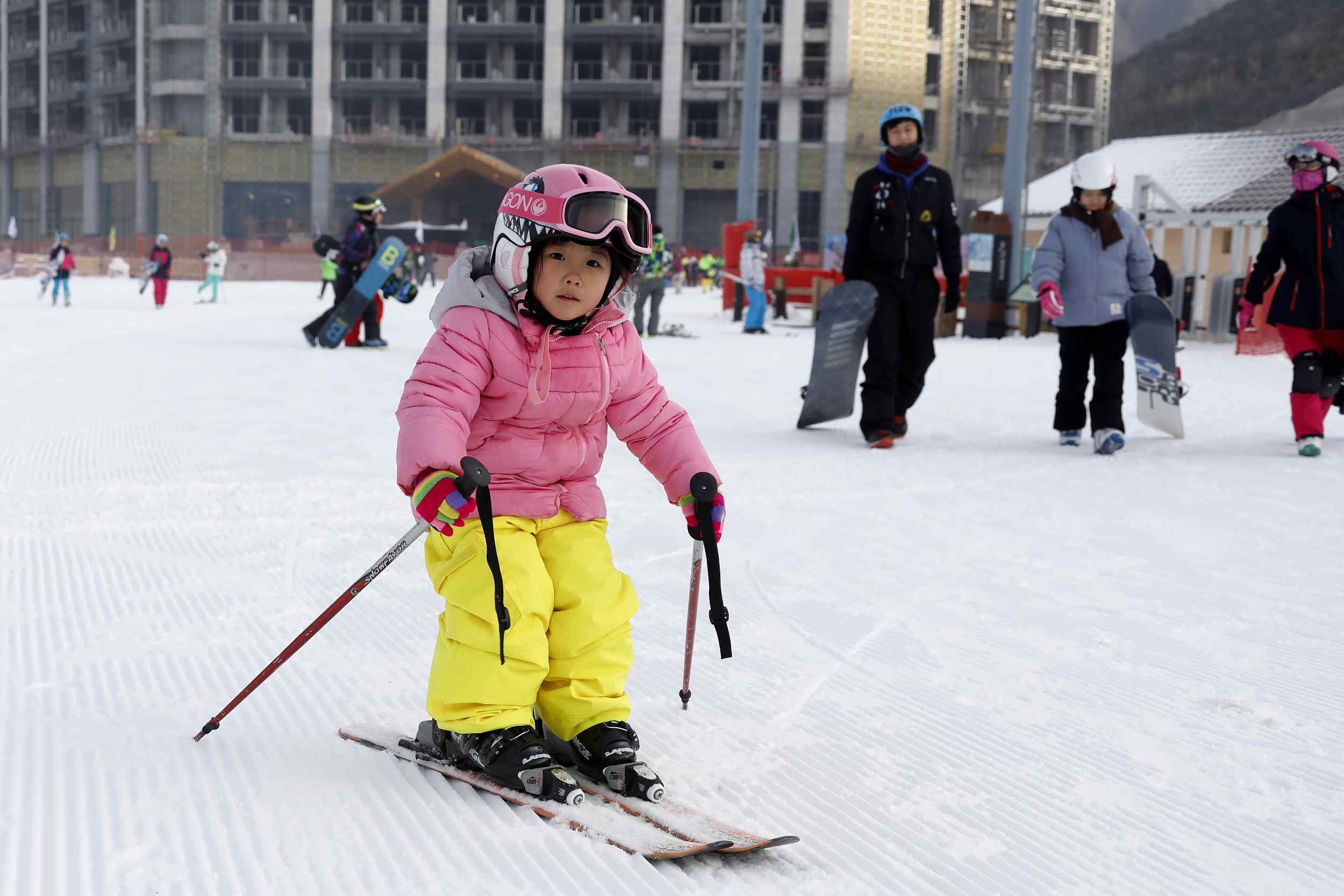 The resort did not exist before 2015. This year, it expects 220,000 people. Throughout the country, a reported 700 ski resorts have sprung up.
From resort managers to those whizzing down the slopes, most credit Beijing's successful 2022 Olympic bid with increasing skiing's popularity.
"Yes, that's a big reason," Gao Hui, a ski and snowboarding novice told CGTN when asked whether the Olympics motivated him to pick up the sport, noting how present Beijing 2022 has been in news coverage.
Out of curiosity, he booked a ski trip for himself and his family last year. "Before that I didn't really follow winter sports, but after experiencing it once, I found skiing is a very interesting, very attractive sport," although he says he now prefers snowboarding "because it looks cooler".
Friends around him have also given it a try and become hooked, recommending it to their friends in turn. 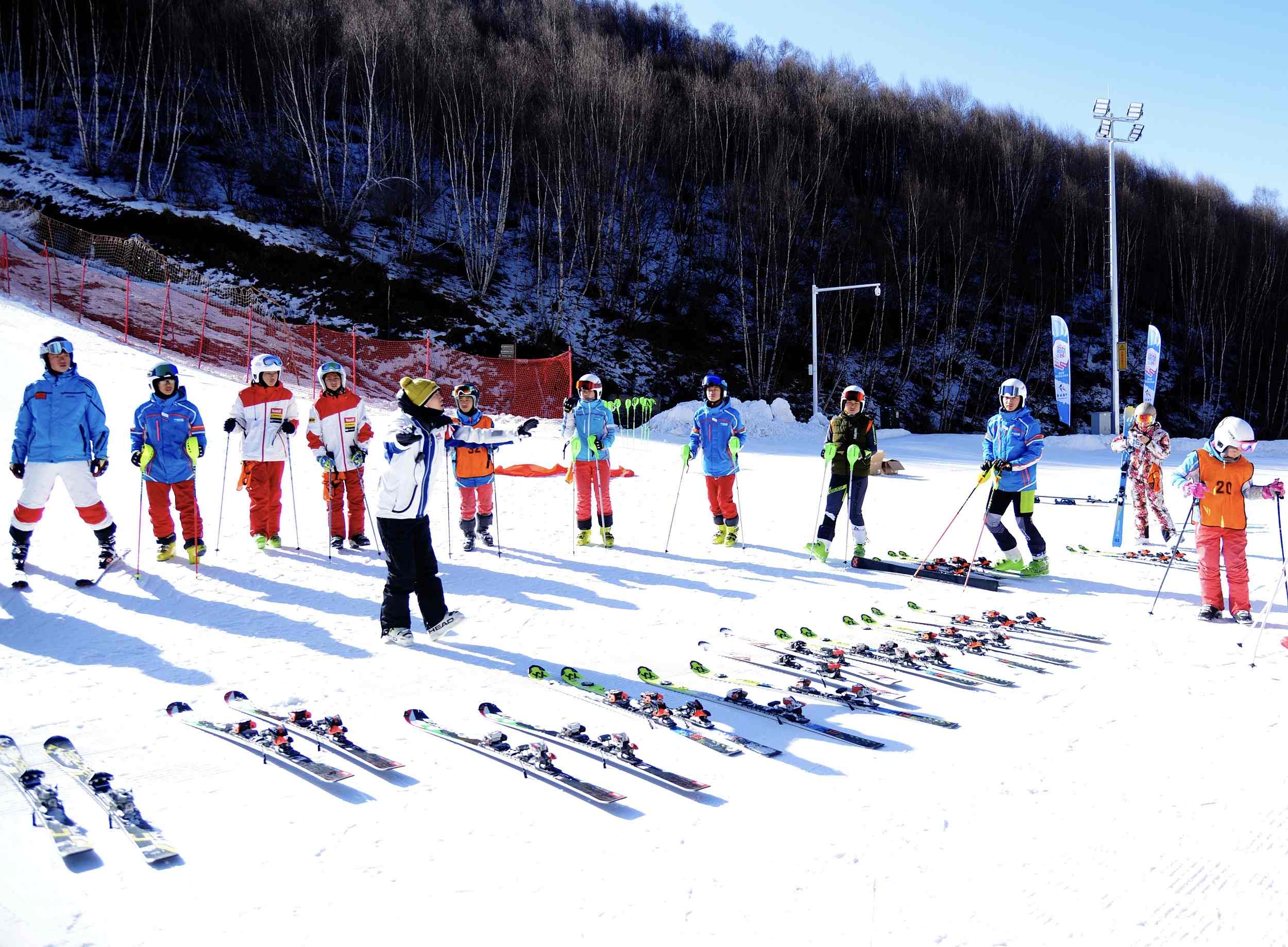 "Skiing has become more and more popular in China. And there are more and more people who come to learn skiing, especially children," Li Yunpeng, one of the instructors at Thaiwoo, agreed, adding that "the 2022 Olympics are definitely a factor."

The spike in interest has thrilled foreign ski manufacturers. For the past two years, ADVANTAGE AUSTRIA Beijing – the commercial section of the Austrian embassy – has organized a winter sports conference in different Chinese ski resorts, bringing together European and Chinese leaders in the field.
From tourism officials to top ski makers like Atomic and Head, the consensus this year in Thaiwoo was clear: snow conditions, slope preparation and the quality of resorts, hotels and restaurants, were top-notch.
"It's excellent, really," Peter Schott, general manager for international trade at Head – the brand behind Olympic and world champions like Lindsey Vonn, Aksel Lund Svindal and Alexis Pinturault – told CGTN on the sidelines of the conference. 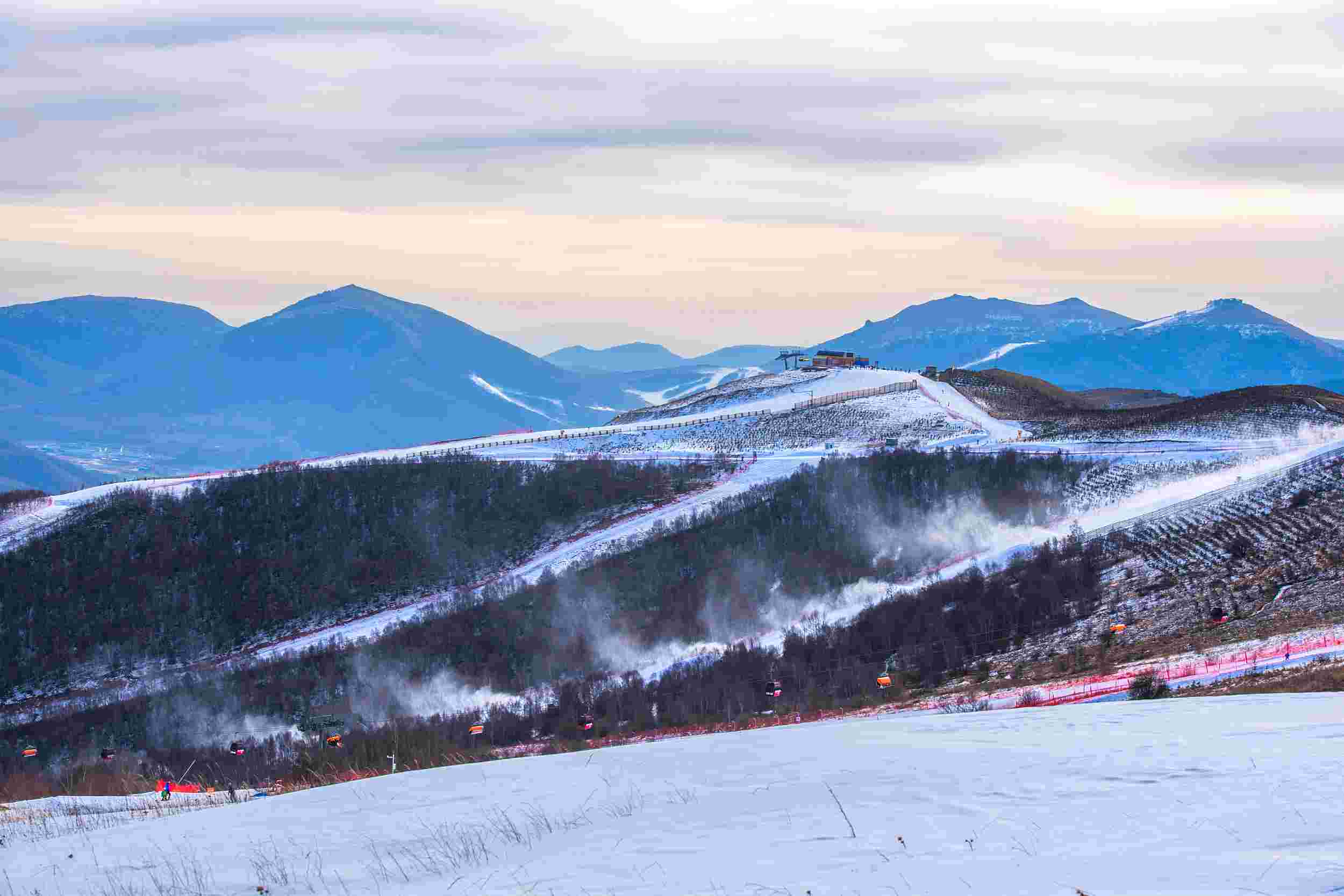 "We come from Austria, skiing is in our DNA, we know how skiing works but what is provided here is simply fantastic. I'm really impressed."
At the moment, China is still a relatively small market for an international brand, accounting for about 50,000 to 60,000 pairs of skis, compared to 300,000 pairs in Austria – a country with a population 160 times smaller.
But "there is a lot of room to grow," said Schott. "China is the big hope for the whole ski industry."
Although the hills of Hebei Province cannot rival the alpine peaks of Switzerland or France, China has an advantage - its massive population. "China has the potential to be the biggest market," even overtaking the current leader, the U.S., he predicted.

There are still a few hurdles. A weekend in a ski resort does not come cheap – a concern that has affected the ski industry in Europe and North America too. 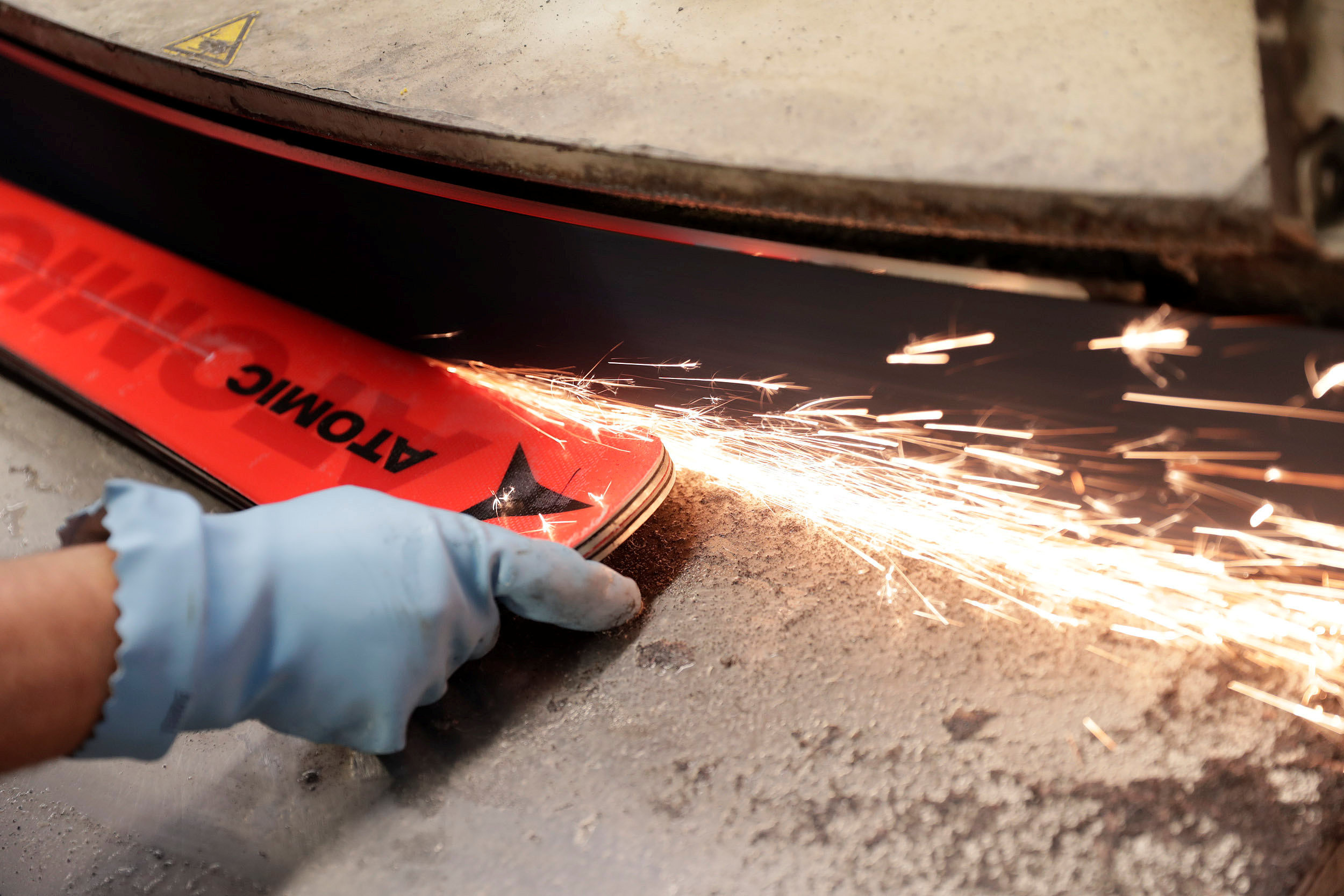 An employee sharpens the edges of a ski at Atomic's headquarters in Altenmarkt, Austria, November 28, 2017. /VCG Photo

An employee sharpens the edges of a ski at Atomic's headquarters in Altenmarkt, Austria, November 28, 2017. /VCG Photo

A one-day weekend lift pass in Thaiwoo costs 492 yuan (73.50 US dollars) – 654 yuan with ski equipment rental. One night in a four-star hotel starts at about 650 yuan, although a bed in the youth hostel can come as low as 100 yuan per night.
But while Gao acknowledges that "skiing is a bit more expensive than other sports... I think if you really like a kind of sport, you will accept the price."
And the sport's trendy image also works in its favor. "I think it's very chic nowadays to ski in China so everybody who is a trendsetter goes on the piste, which is great," noted Schott.
More problematic is the quality of the equipment and servicing. With many people still renting rather than purchasing their skis and boots, what is on offer in resorts is crucial to making skiing a pleasant experience.
"There are still a lot of cheap skis in the market and… it is a fact that even beginners ski better with a better ski, or with a well-serviced ski, with sharp edges, with a well-waxed running base, etc…," said Schott, himself an experienced skier.
"These are things that have to be and will be improved in the future for sure." 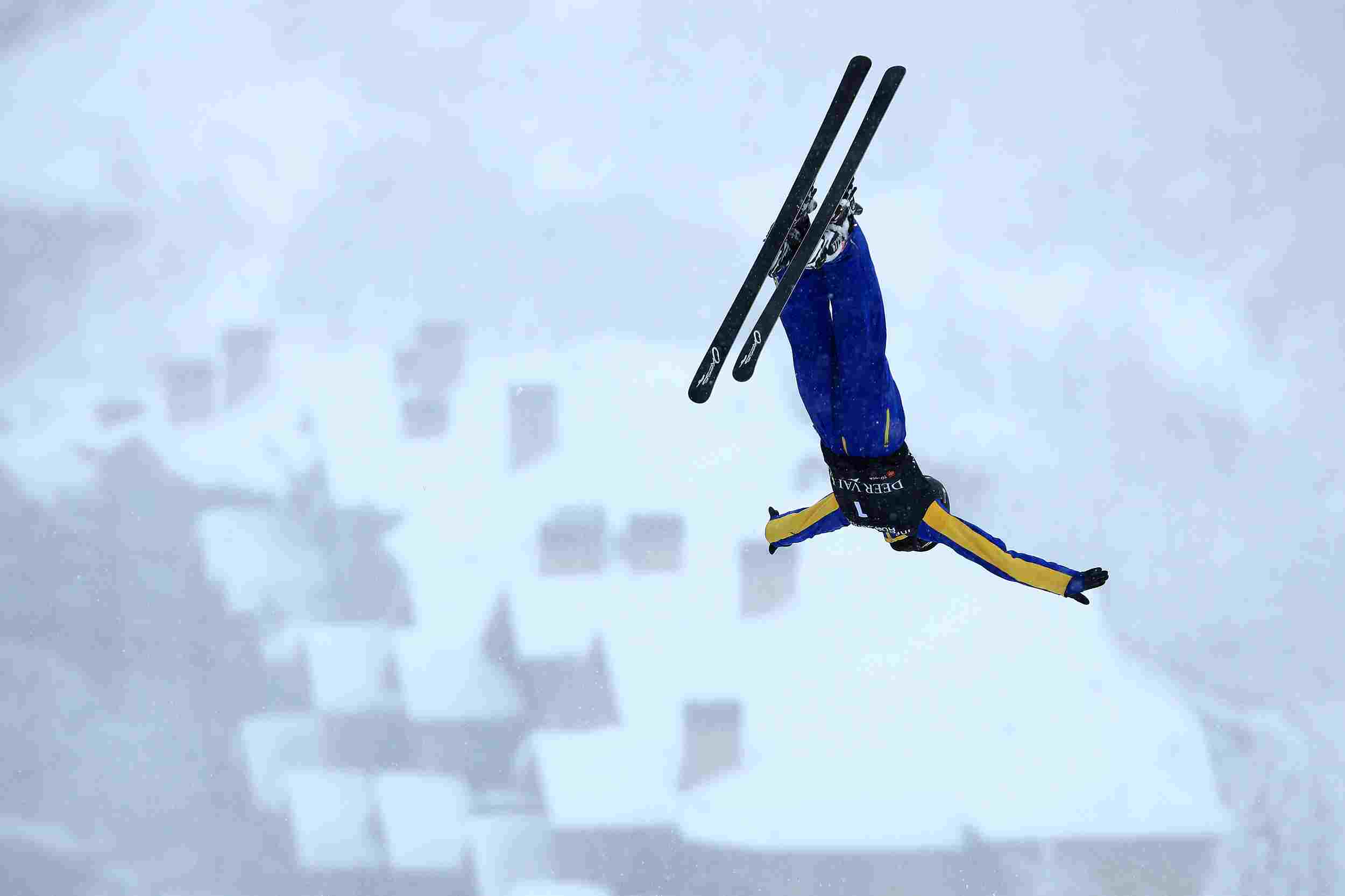 Racing to the top

With alpine skiing steadily gaining in popularity, the next step for China is building a cadre of racing talent. At the moment, the world's top alpine skiers are exclusively from Europe and North America: countries like Austria, France, the U.S., Slovakia, Norway, Italy and Switzerland.
Chinese athletes have won Olympic and world championship medals in freestyle skiing and snowboarding but have yet to make it onto any major podium in alpine skiing.
A ski race organized by ADVANTAGE AUSTRIA alongside the conference, as well as several other competitions taking place that same weekend in Thaiwoo, showed however that young Chinese are keen to take up racing.
The most promising athletes are already being sent to Europe to train in world-class structures. Austrian ski instructors also hold training courses in China. 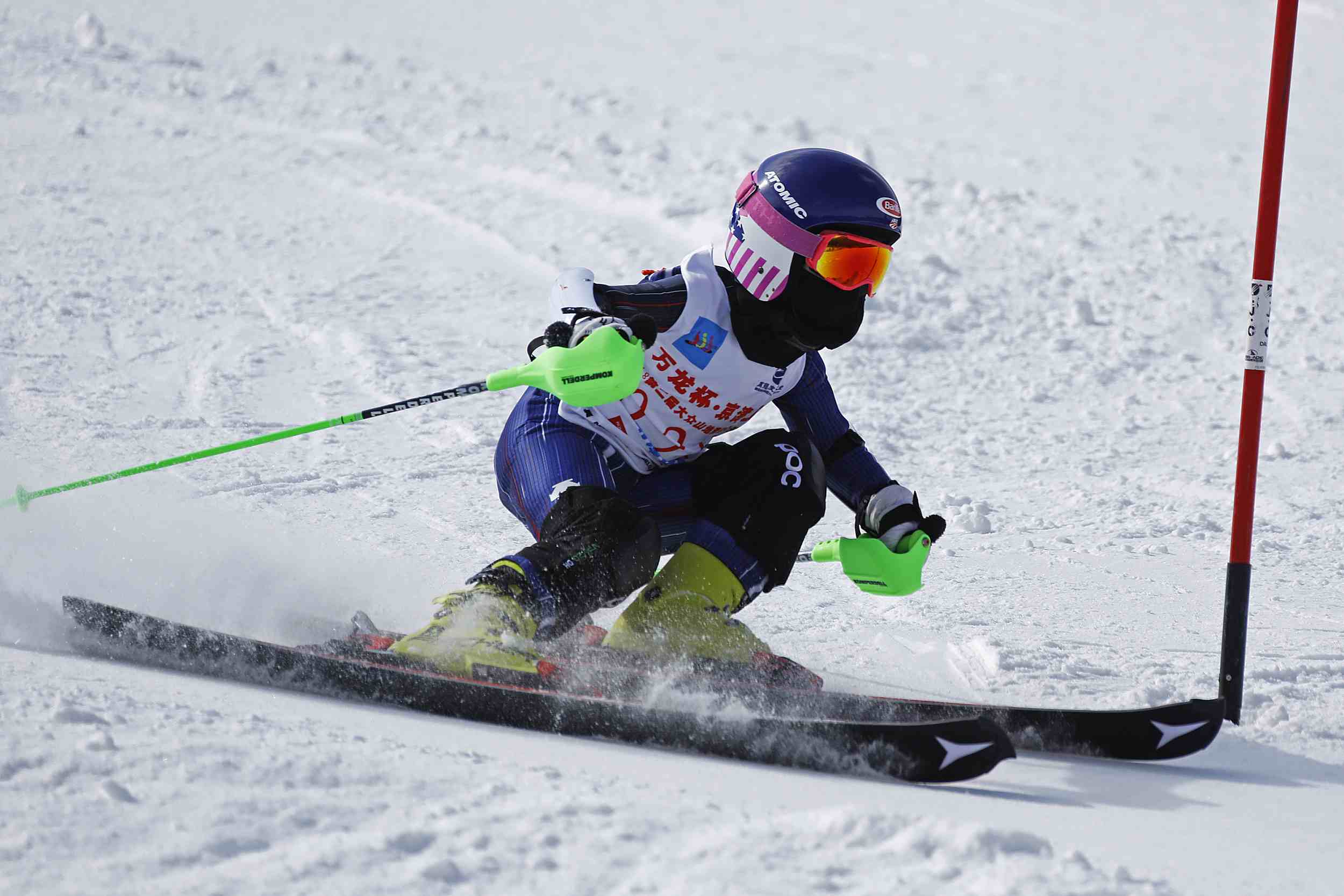 Doris Xiang, 12, has already won several junior competitions and said that in an ideal winter, she skis every weekend, as well as training on the skiing simulator at her school. Others, however, train even more, all year round, she noted.
"It requires a lot of work, it requires a lot of perseverance, and it must be done professionally, it must be organized, or else it wouldn't work," she said of needing the proper coaching and structure to succeed.
She had no doubt that China would soon compete at the very top.
"It definitely will happen one day because many people around us are training, they are going out of the country to train, going to Europe, going to some better places to train, and they will I believe one day be very successful skiers," she said.

The question is whether China can have somebody on the podium in 2022, and both Xiang and Schott were doubtful.
The world's top skiers – Mikaela Shiffrin and Marcel Hirscher – started skiing almost as soon as they could walk and were competing at top level as teenagers. 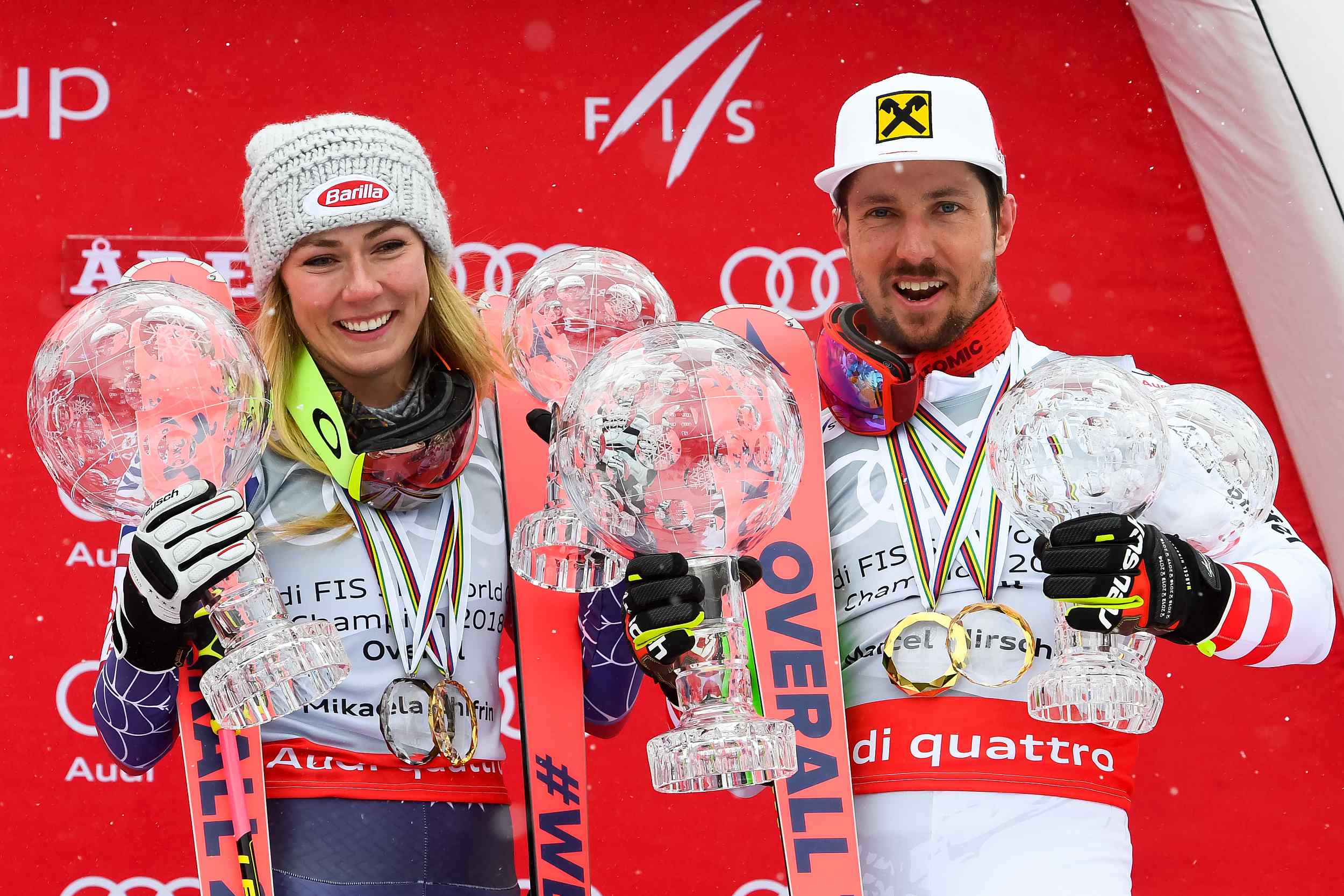 Mikaela Shiffrin of the U.S. and Marcel Hirscher of Austria pose with their trophies after winning the overall 2017-2018 World Cup and crystal globes in slalom and giant slalom, Are, Sweden, March 18, 2018. /VCG Photo

Mikaela Shiffrin of the U.S. and Marcel Hirscher of Austria pose with their trophies after winning the overall 2017-2018 World Cup and crystal globes in slalom and giant slalom, Are, Sweden, March 18, 2018. /VCG Photo

"So it's illusionary to believe that if you start skiing or racing at the age of 20, that two years later you can go to the Olympics. Maybe you can go to the Olympics but you won't win," said Schott.
"It takes time, it takes a lot of training. It takes a lot of physical and technical education."
"But once skiing is established and the structures, also training methods are established accordingly... there is absolutely the potential to create winners in alpine skiing as well," he said.
"China has world-class athletes in so many sports, so why not in skiing?"
(Cover picture: Skiers take advantage of the Spring Festival holiday to go skiing at Chongli, Zhangjiakou City, north China's Hebei Province, February 21, 2018. /VCG Photo)