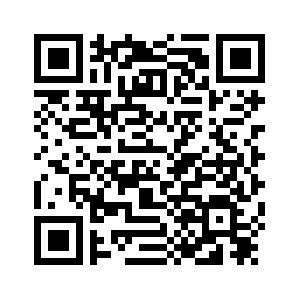 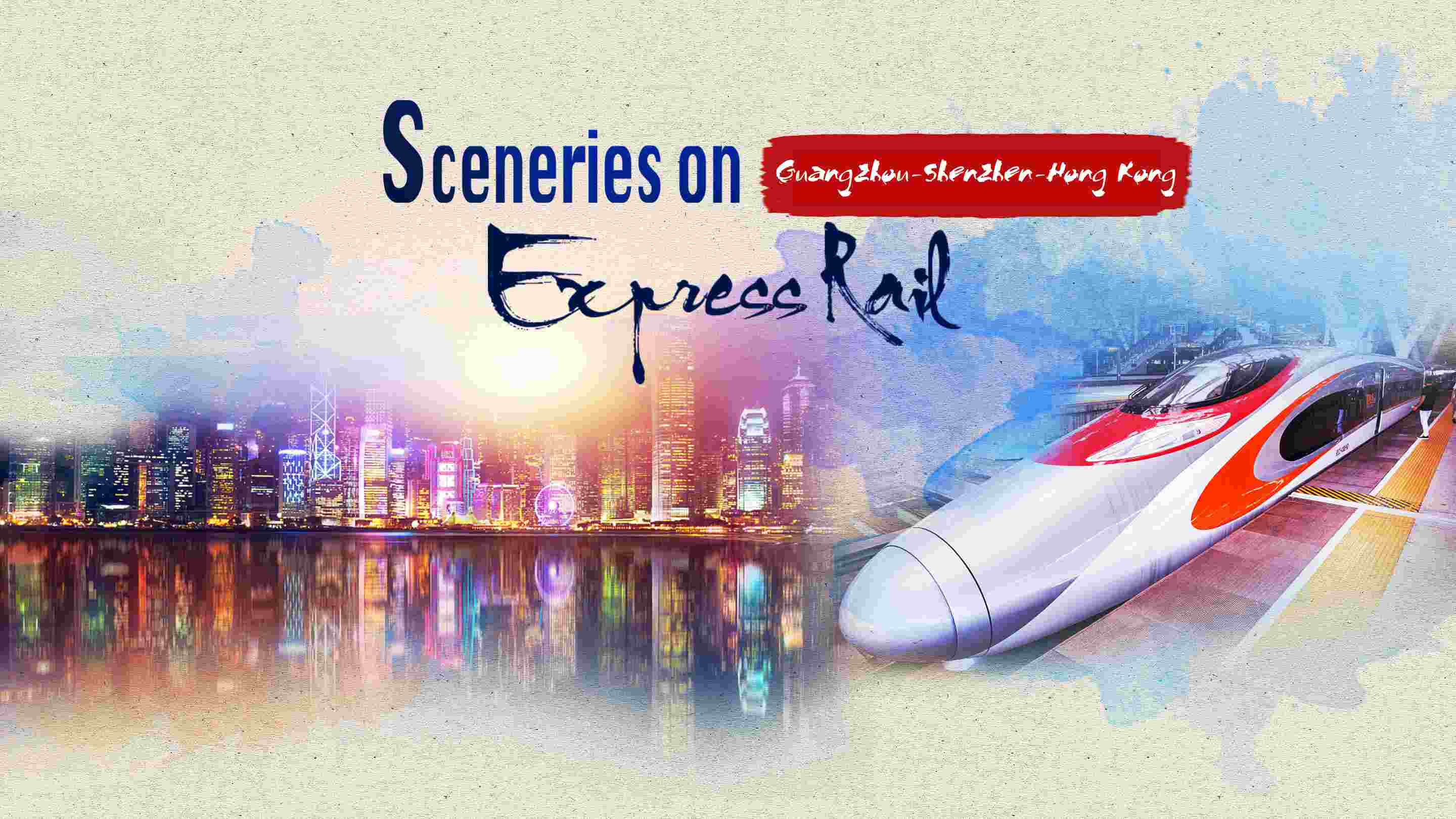 The Hong Kong section of Guangzhou-Shenzhen-Hong Kong Express Rail Link has been in service since September 23, 2018, marking that Hong Kong has officially joined the national high-speed rail network.
Upon its commissioning, the 140-kilometer long railway has brought a boon for travelers both from mainland China and Hong Kong. It offers convenient and fast links in the region with the trip from Hong Kong to Shenzhen taking only 15 minutes, while the fastest one from Guangzhou to Hong Kong lasting around 47 minutes.
It is also considered a milestone in the construction of the Greater Bay Area by enabling a more efficient flow of passengers between Hong Kong and the Chinese mainland. Now people from Hong Kong can reach 44 destinations in the Chinese mainland without interchange.
The ticket price is not expensive. It costs 215 yuan (31.9 U.S. dollars) for a second-class seat, and even less, 187 yuan (27.7 U.S. dollars), at particular times. Already excited about it?  Let's embark on an adventure to explore the metropolis on Guangzhou-Shenzhen-Hong Kong Express Rail.

Guangzhou, the capital city of south China's Guangdong Province, is a vibrant metropolitan city that is located along the southern coastline of China. As one of the first cities benefited from the reform and opening-up policies since 1978, Guangzhou is especially prosperous in commerce as well as tourism.
Stretching over 2,000 kilometers, the Pearl River in Guangzhou is the third longest river in China. Its name originated from a huge rock that was found in the river bed in the past. The rock was named "Sea Pearl" as it was so round and smooth just like a shining pearl. 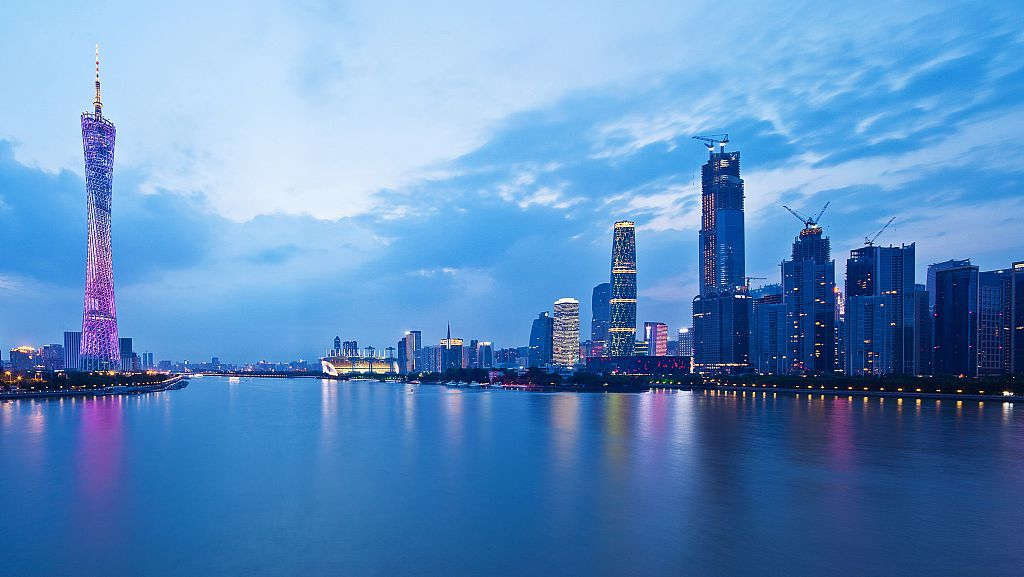 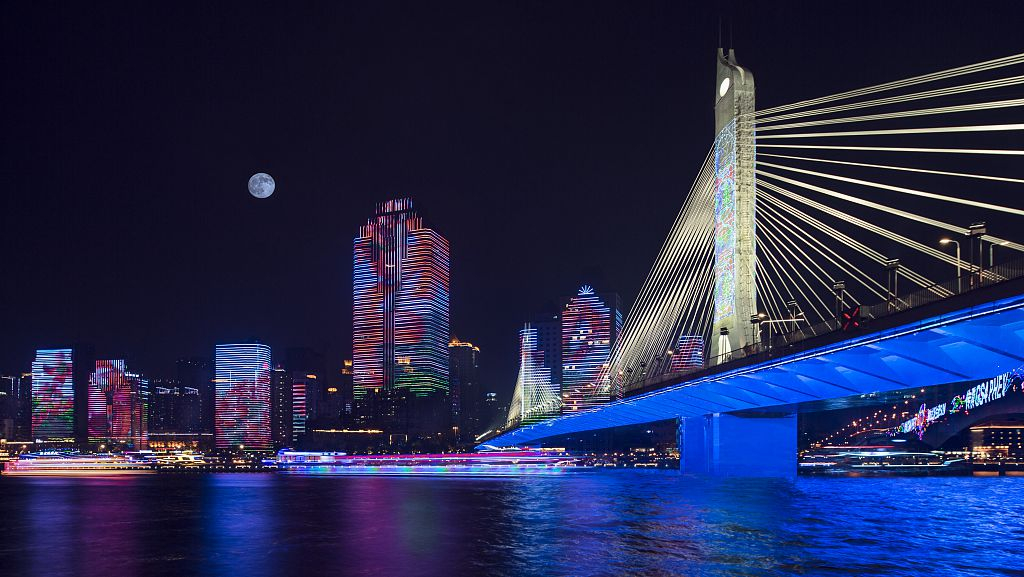 A bridge spans across the Pearl River. /VCG Photo

A bridge spans across the Pearl River. /VCG Photo

The modern development of Guangzhou has brought prosperity and a different charm to the river. When night falls, the bridges that span across the river illuminate with colorful neon lights.
The transportation is quite handy. Take Metro Line 2 from the railway station and get off at Haizhu Square Station, and then Tianzi Matou (Tianzi Wharf) is within a 10-minute walk from Exit A. You can either have fun on a cruise or wander along the bank. 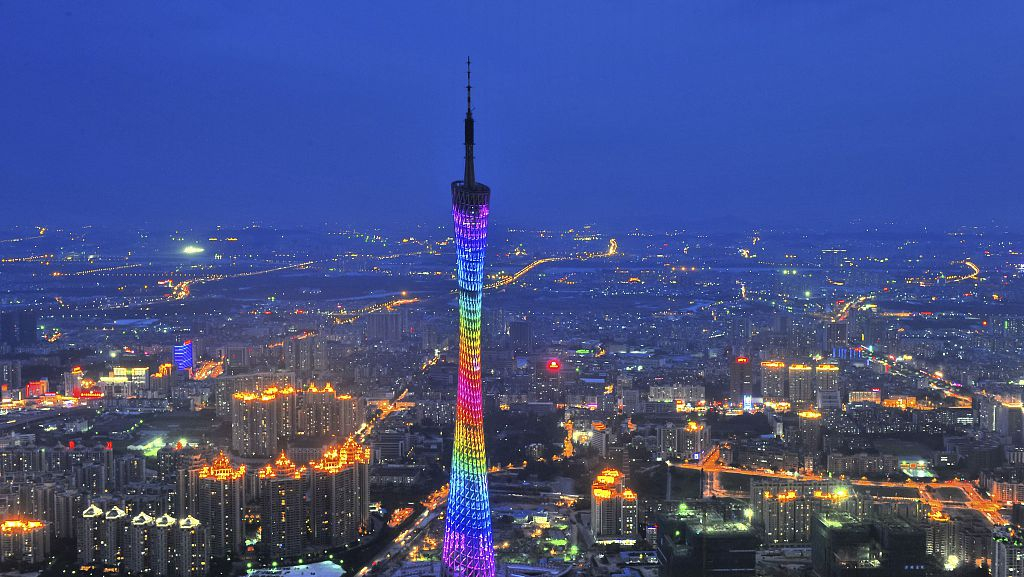 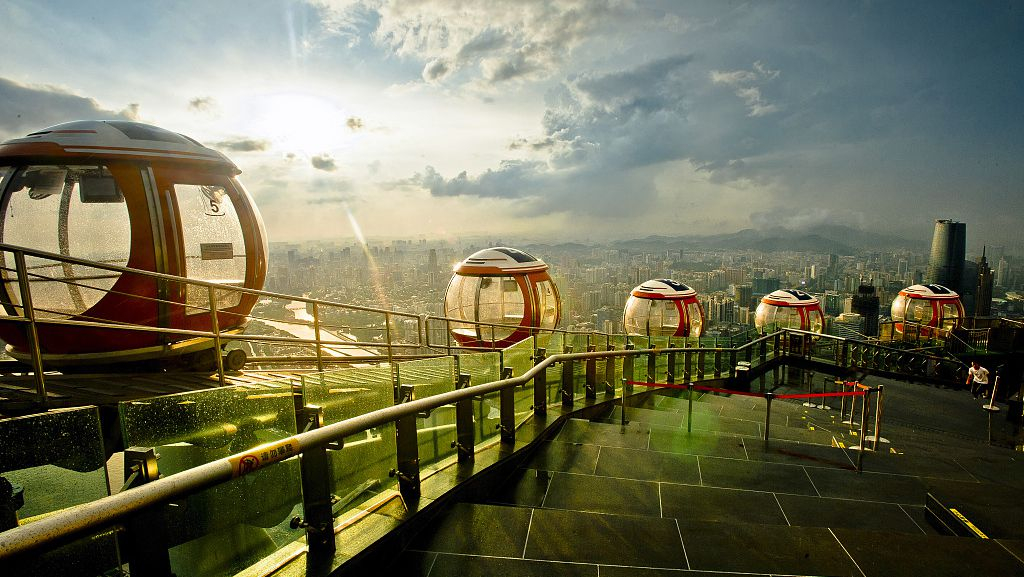 The sightseeing cabins that revolves around the tower. /VCG Photo

The sightseeing cabins that revolves around the tower. /VCG Photo

Canton Tower, the landmark of Guangzhou, is another must-visit spot. It is the highest TV tower in China that stands at the south bank of the Pearl River. With a soaring height of 600 meters, it offers visitors an exclusive bird's eye view of the whole city.
Inside the tower are various recreational activities, fancy restaurants and several sightseeing platforms. Bring your gadget for photo-shooting, and you've got something to brag about on social media.
The opening hours are from 9:30 a.m to 10:30 p.m (local time), and valid identification is required for admission. For adults, the ticket price ranges from 150 to 398 RMB (22.25 to 59.05 U.S. dollars) for different courses.

Shenzhen, also known for its rapid economic development, is situated in the southern part of Guangdong Province. More than 30 years ago, it was just a small fishing village. The year 1980 saw some historical moments when the first Special Economic Zone of China was built here. Neighboring the Pearl River Delta and Hong Kong, Shenzhen's location gives it a geographical advantage for economic development.
Meridian View Center, located on the 69th floor of the Diwang Mansion, is often referred to as the window of Shenzhen. With a height of about 384 meters, this building is the second highest one in Shenzhen, next to KK100. 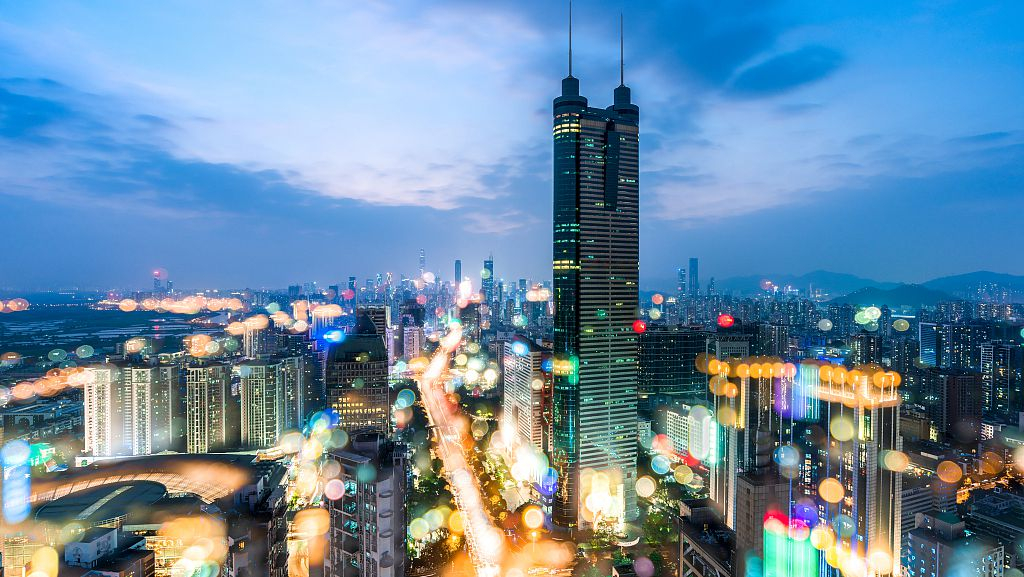 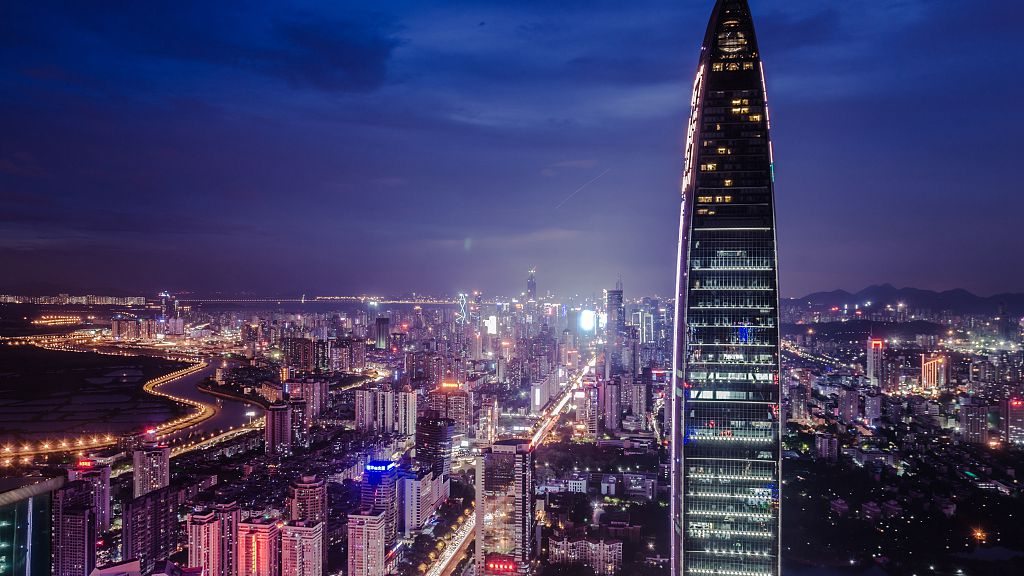 The night view of KK100, a skysraper in Shenzhen. /VCG Photo

The night view of KK100, a skysraper in Shenzhen. /VCG Photo 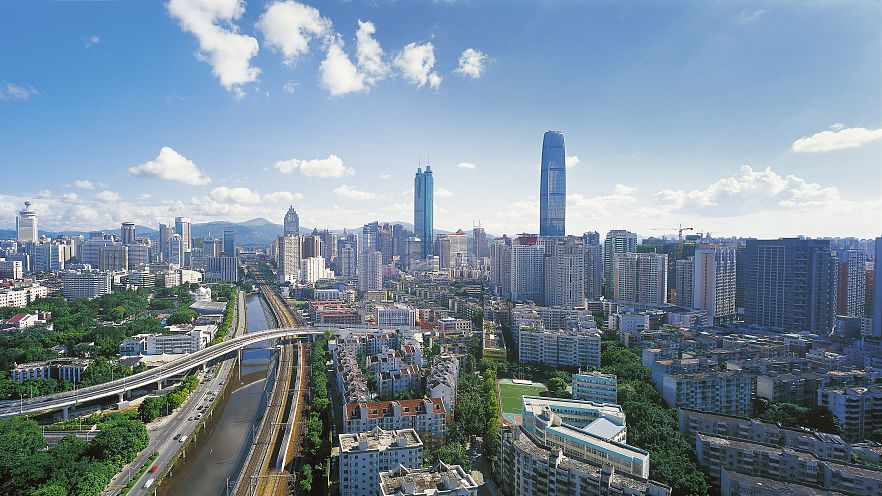 Shenzhen is known for its rapid economic development. /VCG Photo

Shenzhen is known for its rapid economic development. /VCG Photo 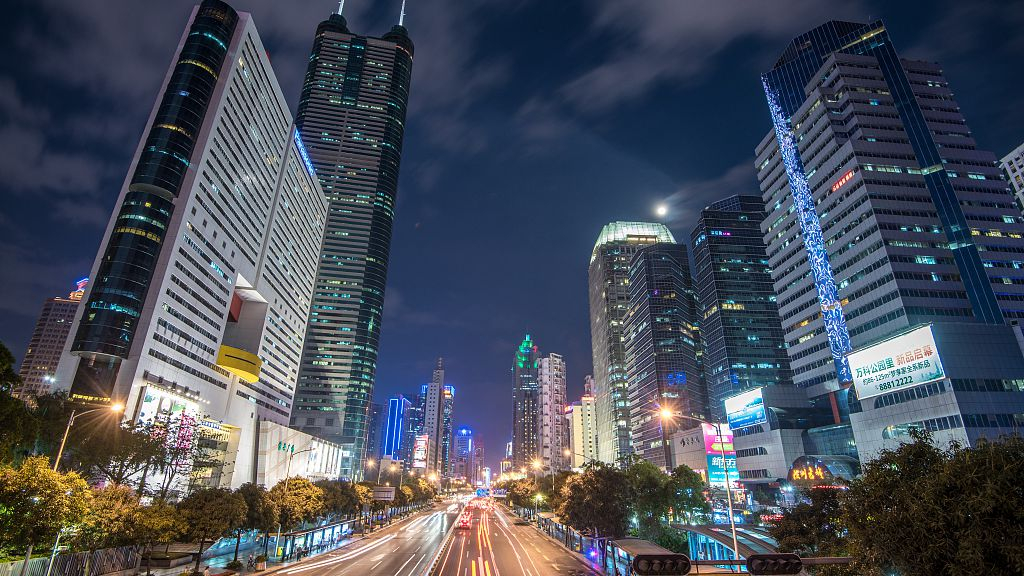 The night view of city street in Shenzhen. /VCG Photo

The night view of city street in Shenzhen. /VCG Photo

Consisting of three major parts – the office area, shopping area and business apartments – it shows the development of Shenzhen. Standing on the top of the mansion, visitors are often amazed at the panoramic view of the city.
The admission fee is 80 yuan (11.8 U.S. dollars) with opening hours from 8:30 to 23:30. It takes up to 30 minutes from Shenzhen North Railway Station to get to Diwang Mansion. Take Subway Line 4 to Shimin Center Station, and then transfer to Line 2 to Dajuyuan (Grand Theater) Station.

Lastly, we arrive at the Hong Kong West Kowloon Railway Station before you even realize it. There is Austin Station right inside the railway station that will get you to some of the city attractions.
Hong Kong presents an exciting combination of traditional Chinese culture and its own attitudes and history. No matter whether you're a skyline lover or dim-sum enthusiast, these are options for every interest.
Here we recommend several must-visit destinations in Hong Kong if it is your first-time travel, such as The Peak, Hong Kong Disneyland, Ocean Park and Tsim Sha Tsui. Check out for more: Explore Hong Kong – a city provides options for every tourist

1. You can book high-speed train tickets on the official ticketing website: www.12306.cn. It is recommended that you collect the round-trip tickets before your departure. It costs an extra fee if you pick up the return ticket at West Kowloon Railway Station.
2. There are limitations to your baggage. Each bag needs to be less than 20kg per adult and less than 10kg for children. Otherwise, an extra fee is requested.