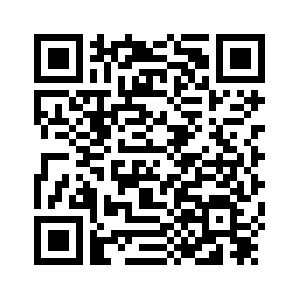 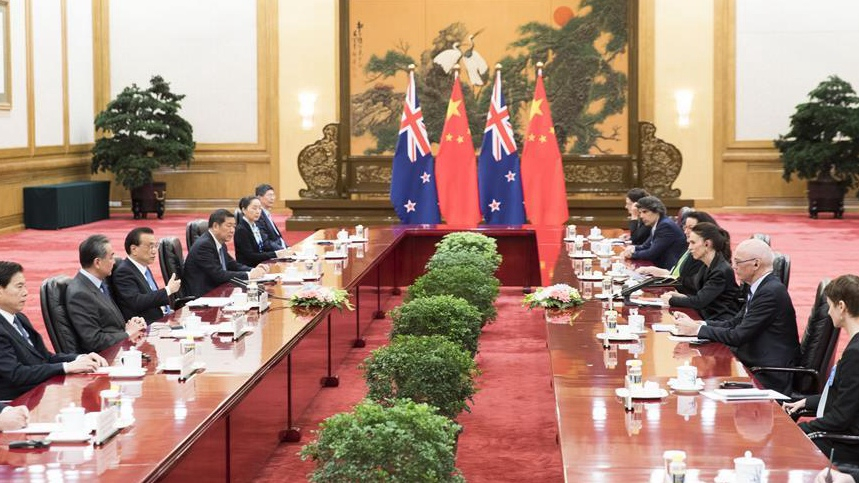 Editor's note: Bobby Naderi is a journalist, current affairs commentator, documentary filmmaker and member of the Writers Guild of Great Britain. The article reflects the author's opinion, and not necessarily the views of CGTN.
Despite some points of friction and complexities in the relationship, there is certainly a lot of substance to talk about the decision by New Zealand Prime Minister Jacinda Ardern to travel to China for the first time on April 1.
During her visit, PM Ardern opened New Zealand's new embassy in Beijing and held extensive talks with Chinese President Xi Jinping and Premier Li Keqiang, during which the two countries signed four cooperation agreements in agriculture, finance, science and research.
In some ways this short but universalist and inclusive discourse is vital for the two key economic players in the Asia-Pacific region and beyond.
In his opening remarks, President Xi expressed his deep sympathy on the Christchurch shootings, and said, “China sees New Zealand a sincere friend and cooperation partner. Now the bilateral relationship faces new opportunities of development. Our two sides must trust each other, pursue mutual benefit and strive to open up new grounds in our bilateral relations." 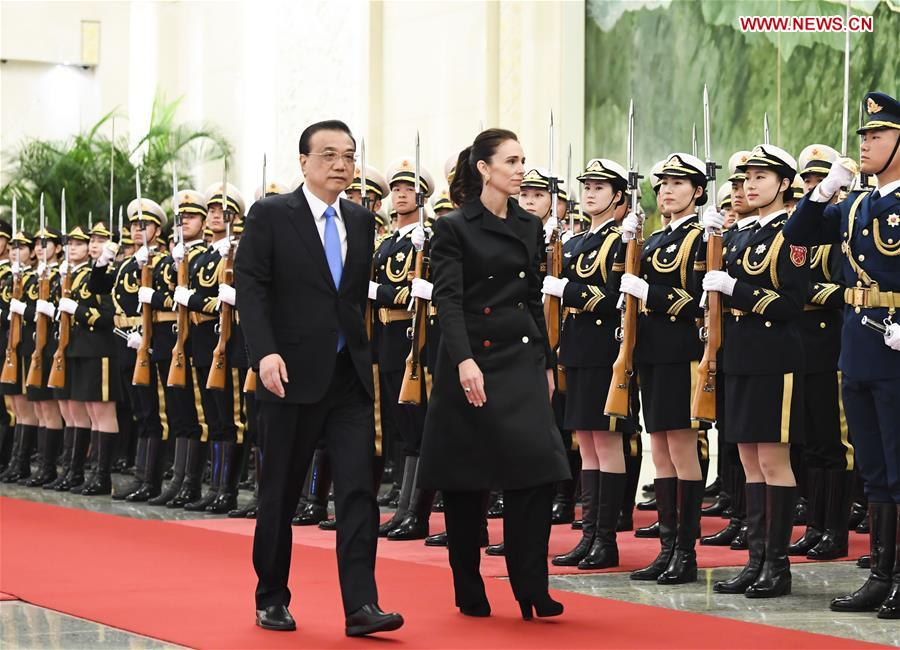 Chinese Premier Li Keqiang (L) holds a welcoming ceremony for New Zealand Prime Minister Jacinda Ardern ahead of their talks at the Great Hall of the People in Beijing, China, April 1, 2019. /Xinhua Photo

Chinese Premier Li Keqiang (L) holds a welcoming ceremony for New Zealand Prime Minister Jacinda Ardern ahead of their talks at the Great Hall of the People in Beijing, China, April 1, 2019. /Xinhua Photo

In reply, PM Ardern said, "My choice to proceed with the Beijing leg of my visit does reflect the value New Zealand places on its relationship with China, and acknowledge that you too have seen the strength of that relationship through the fact that we are here meeting in spite of those circumstances in New Zealand."
This couldn't be clearer to anyone. On the realpolitik side of it, PM Ardern offered her very personal endorsement of broader cooperation with China, which is New Zealand's largest trading partner. This will help reset ties between the two market economies under the Belt and Road Initiative (BRI), the largest infrastructure development project that is reshaping the trajectory of the 21st Century.
New Zealand is the first developed Western economy to sign a Memorandum of Understanding on the BRI with Beijing - a unified market without peer on the planet. Its Trade Minister David Parker will be leading a business delegation for the second Belt and Road Forum for International Cooperation this month in Beijing.
This is while the U.S. has been putting pressure on Wellington to ditch the BRI amid the escalating trade war with Beijing. This, however, didn't stop Italy from joining the BRI in March, or the European Union from expressing its willingness to join in. The hope is that New Zealand will equally maintain its independence, “without giving anyone a diplomatic black eye.” Together, the two countries can ride a wave of rapid economic expansion with a burgeoning industrial and technological infrastructure, and a growing share of regional and international trade. 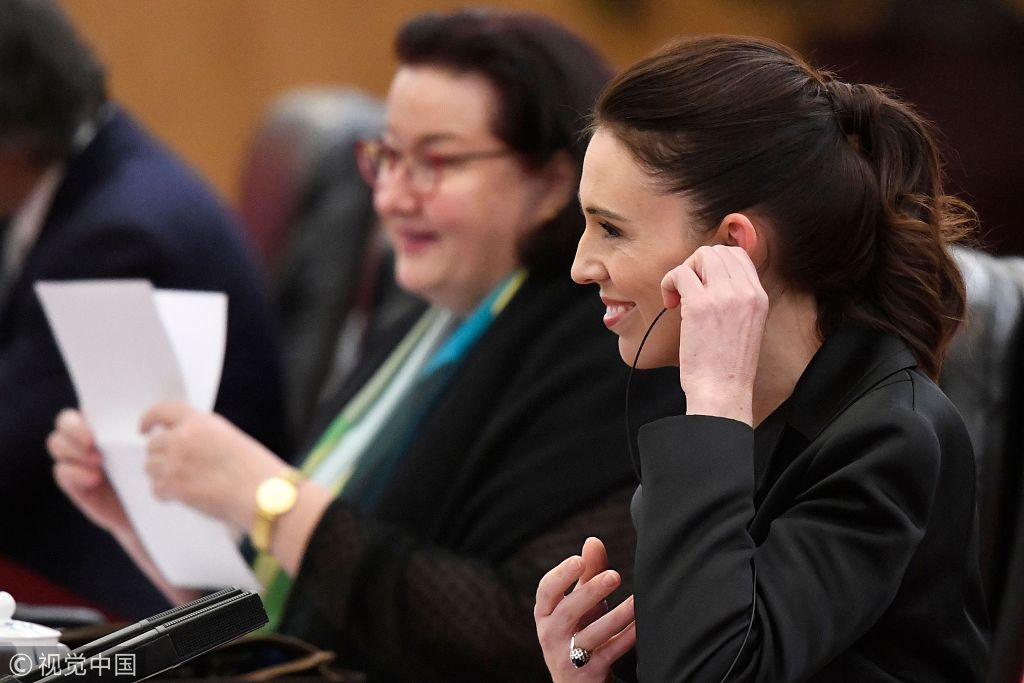 New Zealand Prime Minister Jacinda Ardern (R) smiles during a meeting with Chinese Premier Li Keqiang (not pictured) at the Great Hall of the People in Beijing, April 1, 2019. /VCG Photo

New Zealand Prime Minister Jacinda Ardern (R) smiles during a meeting with Chinese Premier Li Keqiang (not pictured) at the Great Hall of the People in Beijing, April 1, 2019. /VCG Photo

Similarly, despite different social systems and opinions on certain topics, China and New Zealand have a common stake in maintaining a rules-based multilateral trading system that is against protectionism and isolationism. Ties became strained a few months ago due to Washington's grandiose claims and pressure on Wellington to block Chinese telecoms group Huawei from providing 5G equipment to its main telecoms operator Spark on national security grounds.
On this note, PM Ardern dismissed concerns of a rift with China and said “some media reports that suggest Huawei is banned in New Zealand are not true.” Her declaration could be a goodbye to this litany of American absurdity, to a nation engaged in an Orwellian set of narrow economic nationalism and trade-tariff wars – at any cost. It's a call upon other like-minded nations to support an economic order that is open, all-encompassing and balanced to achieve common prosperity across the globe.
Finally, the new development in relations came just two weeks after the terrorist attack against two mosques in Christchurch in which 50 people were killed. The two sides have a lot to gain from broadening their “mature and resilient” relationship in the fight against terrorism and extremism. Since terrorism and extremism represent a threat to their security, freedom and values, China and New Zealand can provide an appropriate and tailored response to jointly combat this phenomenon in the region and beyond.
One thing already seems clear: Links between China and New Zealand are now all-encompassing. They should continue to ink a good number of trade deals and cooperation agreements on a range of economic, commercial and industrial fields during the upcoming BRI Forum in Beijing. The forum is set to witness an unprecedented rise in the scope of regional and international trade cooperation - equal under the rule of law and governed through international institutions such as the United Nations and the World Trade Organization.
The two countries have what it takes to ensure a fair investment environment during the forum for the economic integration of Asia, Africa, and Europe, through joint infrastructure projects that could ultimately expand and extend the current global economy.
(If you want to contribute and have specific expertise, please contact us at opinions@cgtn.com.)