Opinion: The Singapore Summit: Where’s the beef?
By Harvey Dzodin 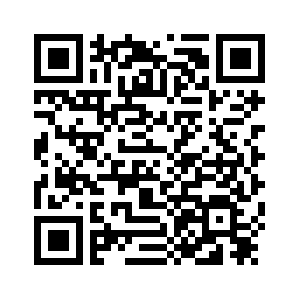 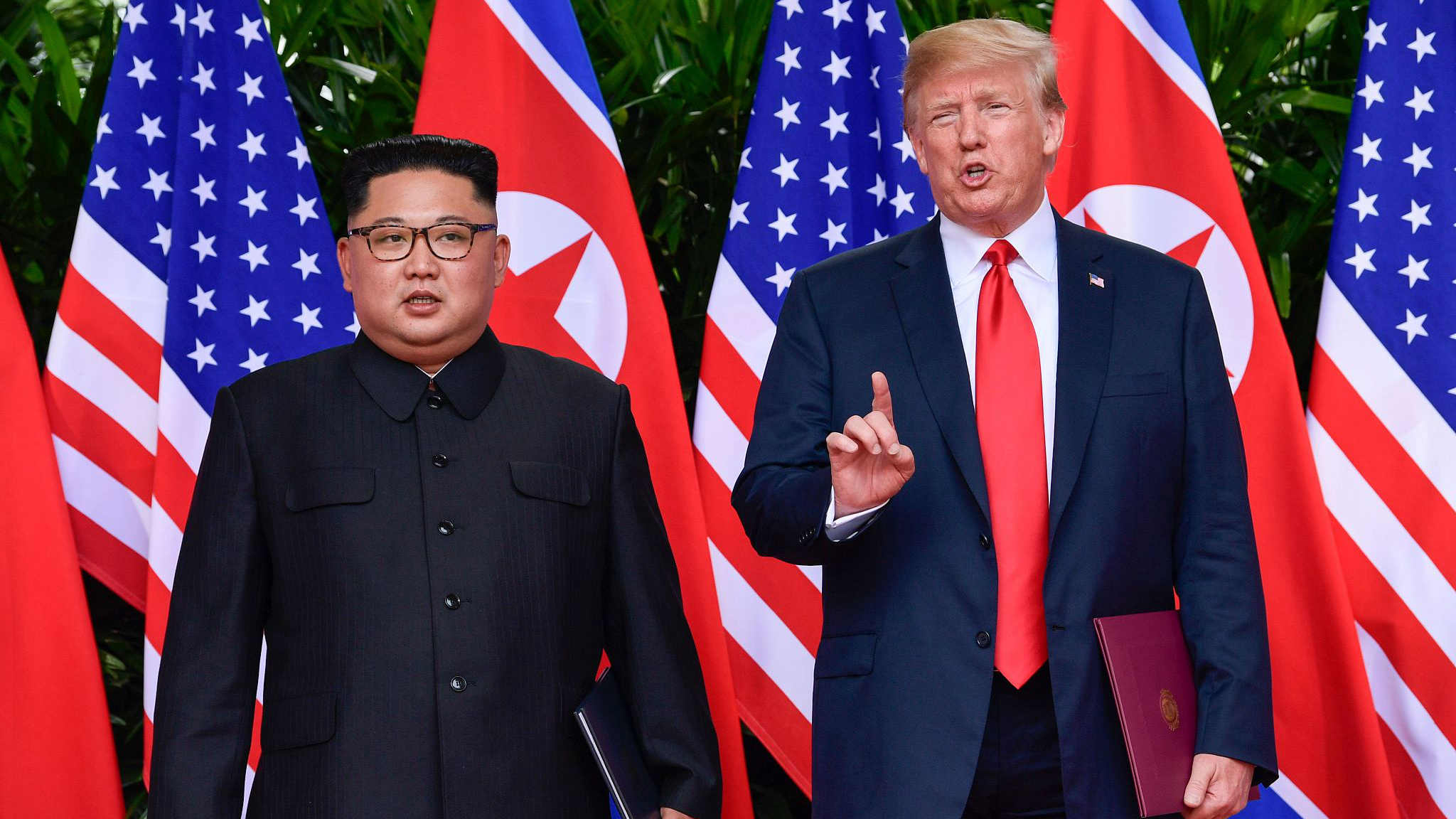 Editor’s note: Harvey Dzodin is a former legal advisor in the Carter administration and a Research Fellow of Center for China and Globalization. The article reflects the author’s opinion, and not necessarily the views of CGTN.
The Singapore Summit is now history. US President Donald Trump and DPRK leader Kim Jong Un did everything, except come to any significant specific agreement. It reminds me of the iconic 1984 Wendy’s commercial for Trump’s favorite health food, the hamburger, with the memorable tagline: “Where’s the beef? Where’s the beef?”
I’m not saying that the optics weren’t good and getting these two unpredictable leaders talking under the same roof wasn’t a significant first step, but after reading the 400-word joint statement, any realistic person has to conclude that substantively in its current state it’s just an unsatisfying nothing burger and that the real work hasn’t yet begun.
For the moment not much of substance has changed. Even the punishing sanctions imposed on the DPRK are fully in place. Prior to the meeting the US side was talking tough and insisting on a declaration from DPRK at the summit of immediate Complete, Verifiable, Irreversible Dismantlement (CVID) of the North’s nukes. The sides, however, don’t even agree on what denuclearization means. This is not a good omen with so much at stake. 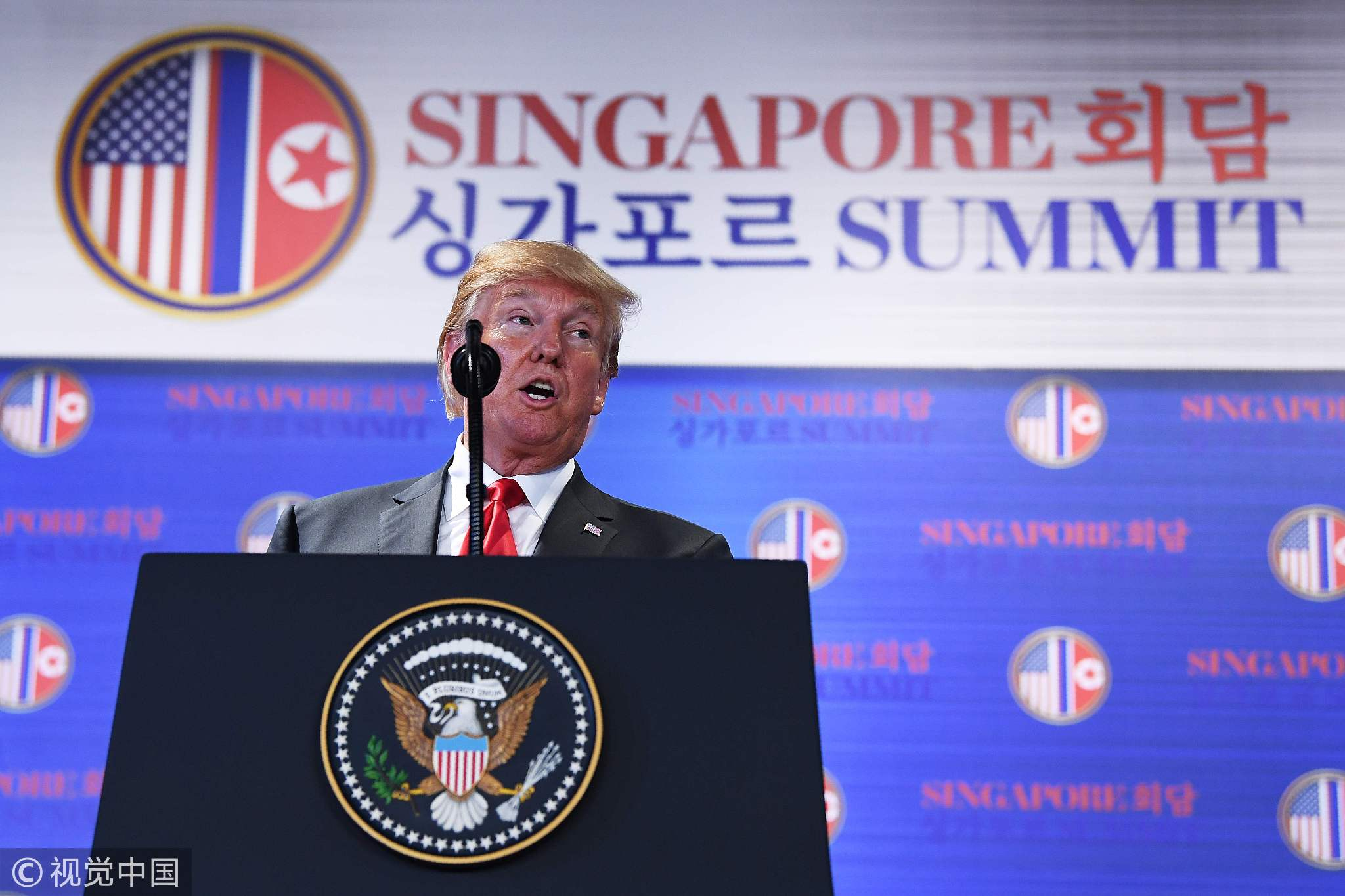 US President Donald Trump speaks at a press conference following the historic US-DPRK summit in Singapore on June 12, 2018. /VCG Photo

US President Donald Trump speaks at a press conference following the historic US-DPRK summit in Singapore on June 12, 2018. /VCG Photo

So what’s left? Both sides commit to laudable but very general goals of establishing a new era of peaceful bilateral relations for a lasting and stable peace government on the Korean Peninsula, committing to work toward complete denuclearization of the Peninsula, and recovery and repatriation of soldiers’ remains. The US promises to provide security guarantees in exchange for denuclearization. That’s it: more or less a wish list. So I ask again: "Where’s the beef?”
At Trump’s press conference while Kim was en route home, he said that military exercises were demeaning and would cease but it appears that it’s more a matter of saving money. If Trump wanted to really build confidence and please China in the process, he would have removed the THAAD missile defense system in the Republic of Korea.
I am not concluding that this isn’t a reset for a new beginning; it may be! While I’m sure that inviting Kim to the White House with pomp and circumstance won’t in itself produce CVID, a process that expert say can take 15 years, it will put the two leaders on an equal footing and help create a win-win atmosphere.
I am in fact cautiously hopeful that serious negotiations will begin shortly. But for all the huffing and puffing from the US side, the results are meager, to say the least.
Without the creation of a specific roadmap at the Summit, I worry what could happen next. Both leaders have short fuses. It wouldn’t have been surprising to have both leaders conclude the summit by singing “Give Peace a Chance” but there’s an awfully big devil in the details. 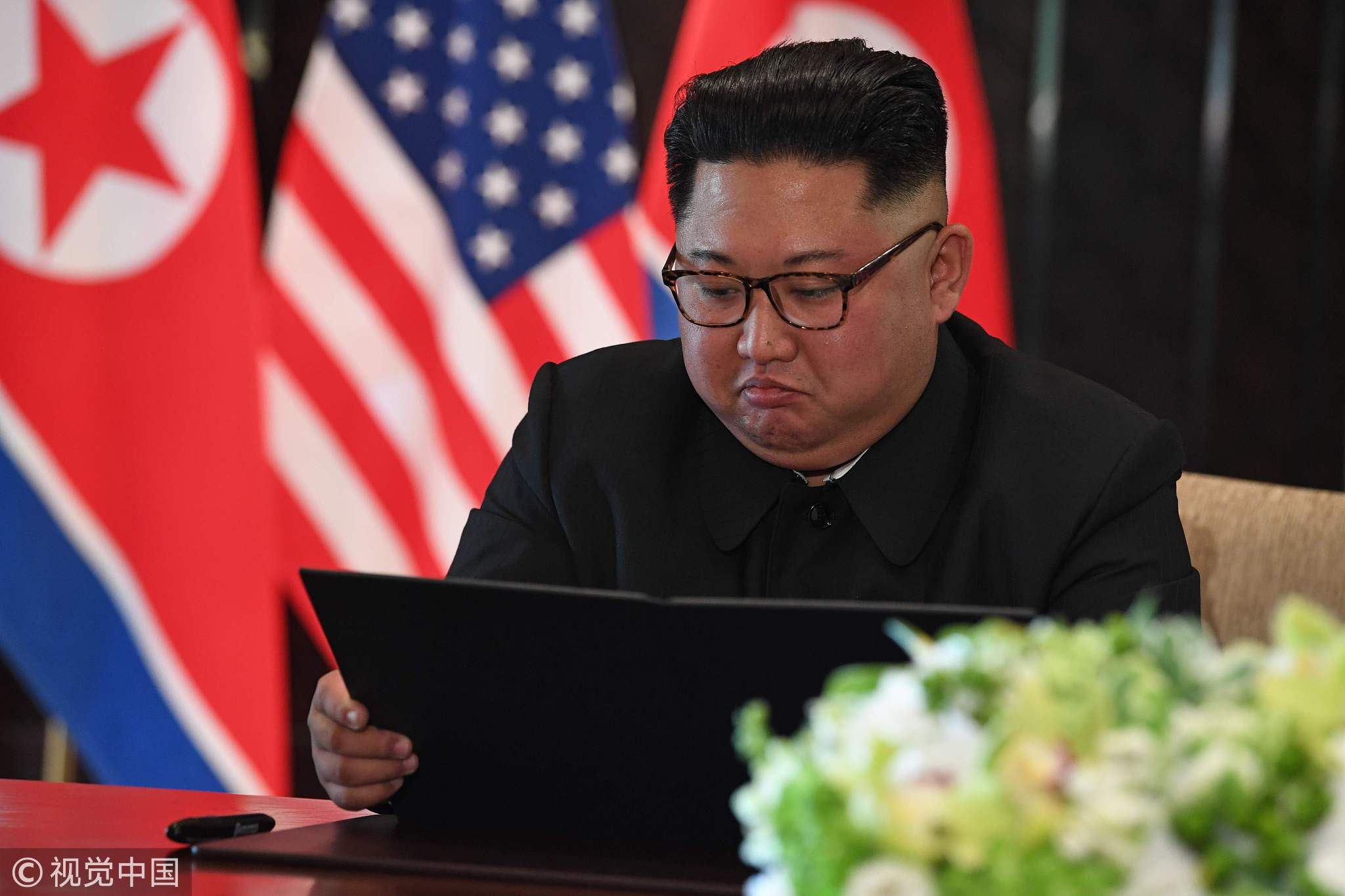 DPRK's leader Kim Jong Un looks at his document at a signing ceremony with US President Donald Trump (not pictured) during their historic US-DPRK summit, at the Capella Hotel on Sentosa island in Singapore on June 12, 2018. /VCG Photo‍

DPRK's leader Kim Jong Un looks at his document at a signing ceremony with US President Donald Trump (not pictured) during their historic US-DPRK summit, at the Capella Hotel on Sentosa island in Singapore on June 12, 2018. /VCG Photo‍

We needn’t look back more than a few days to the G7 summit in Canada, where Trump was complimenting Canadian Prime Minister Justin Trudeau in person, and once away he and his people were making the most unacceptable and undiplomatic remarks about him, the leader of the US’s most friendly ally and neighbor. And remember that it’s less than a year since Trump was insulting Kim as “little rocketman”.
And that’s not all. We’ve been down a similar road before more than once with Kim’s father and grandfather in the Agreed Framework and the Six-Party Talks where history repeated itself with the DPRK dialoguing, receiving aid, reneging based on perceived US hostility and then repeating the process.
No wonder former US Secretary of Defense famously said that the US was “tired of buying the same horse twice”. Are we going to make a definitive, iron-clad deal this time, or buy the same horse yet again? Time will tell.
I am sympathetic to Kim’s perceived need for nuclear weapons. Fear of the use of nukes by DPRK is not unfounded paranoia. In 1950 US President Harry Truman said that there was “active consideration” of nuking the DPRK.
And although Kim needed no reminding, US National Security Advisor John Bolton threatened Kim with the use of the Libyan model. And of course there’s the withdrawal from the agreement with Iran.
I hope that the summit represents not only turning an ugly corner but a new beginning. However, given recent history and the lack of any results at the Singapore Summit, I have to conclude that making progress is like what English writer Dr. Samuel Johnson said of second marriages: “The triumph of hope over experience”.