Migrants surge into Bosnia on way to Europe
By Aljosa Milenkovic 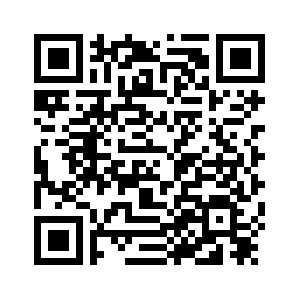 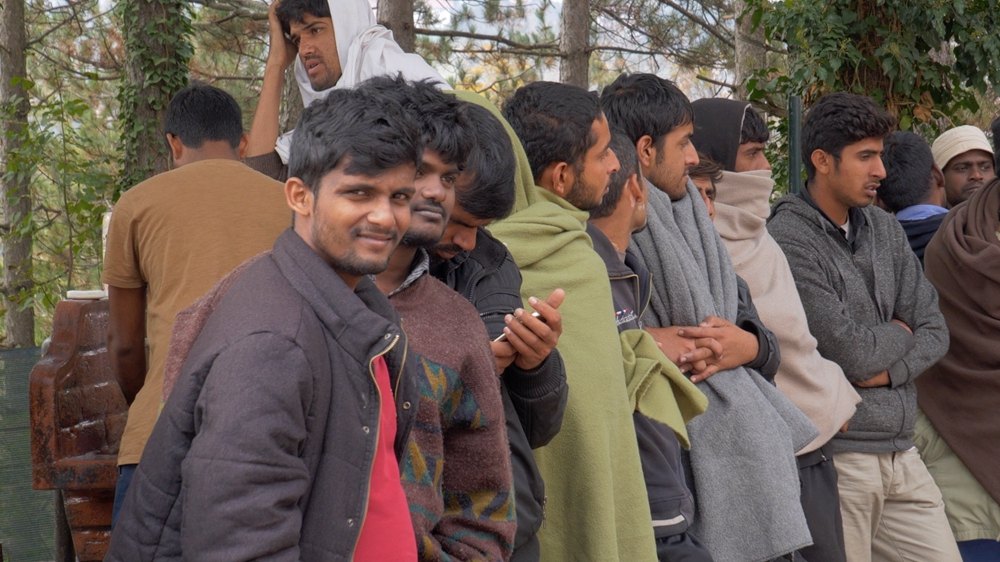 Tens of thousands of people from impoverished countries in Asia and Africa are trying to reach wealthy western Europe, seeking a better life. Some of them are using the so-called Mediterranean route, while others are going through another rough route through the Balkans.
The latest iteration of that journey begins in Turkey and continues through Greece, Albania, Montenegro, Bosnia, and then to the EU.

The western Bosnian town of Bihac is the latest hotspot on that route. It is also the last stop for migrants before entering Croatia and the EU.
When you drive along a beautiful street in the downtown of Bihac, dozens of migrants can be seen, walking on the side of the road. 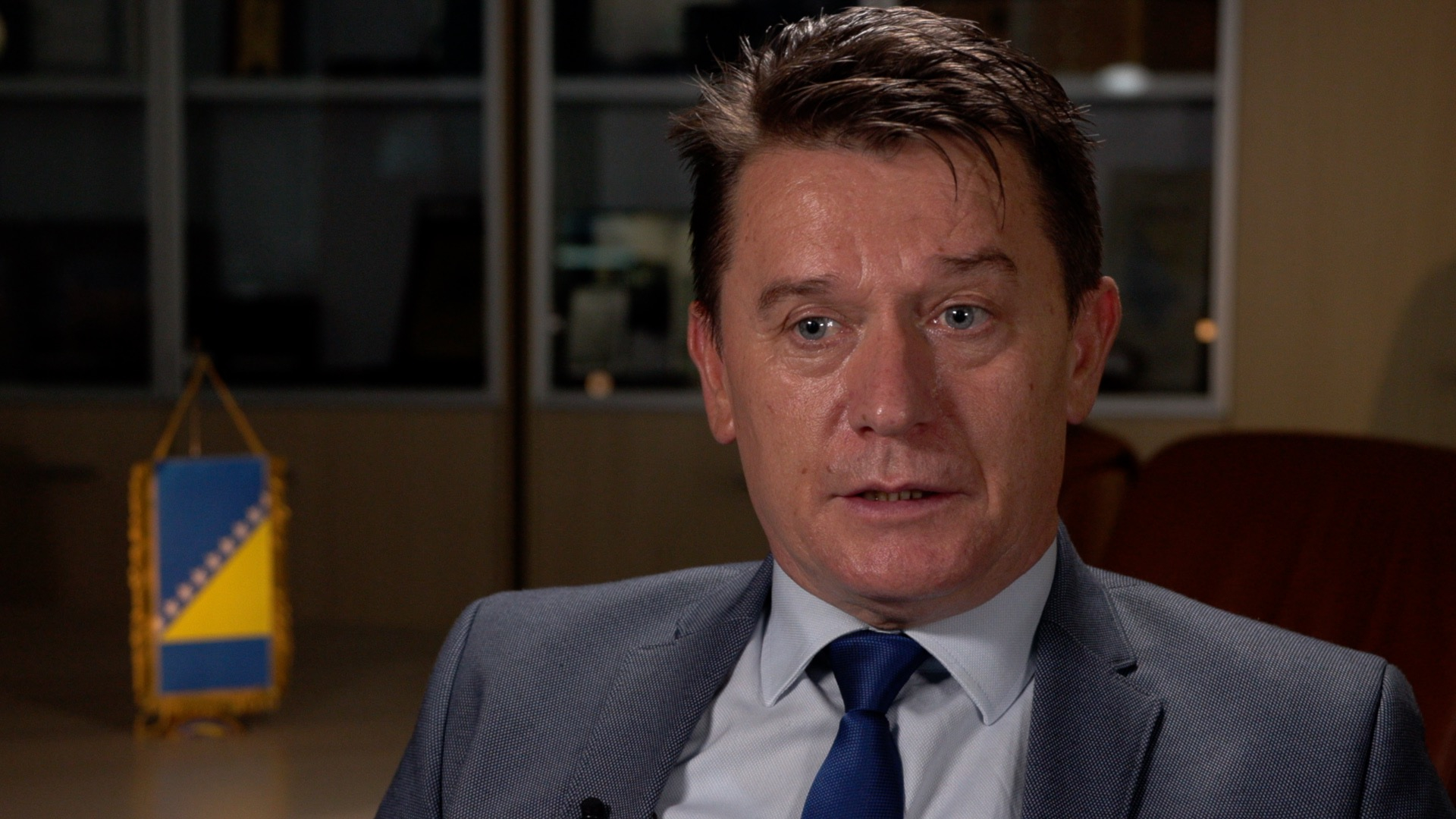 Around noon each day, they are heading towards their improvised camp in one of the town's parks. A full one hour before lunchtime, they have already started queuing in front of a building, which was supposed to be in a student campus.
It is in fact just a skeleton of a building, with no windows, doors, or any facilities. Migrants don't have too much help and they just pray for nice weather to continue. And their numbers are rising dramatically. That was confirmed by Mijo Krešić, Deputy Security Minister of Bosnia and Herzegovina, in an interview with CGTN.
"Over the last several days, higher pressure is visible on the Bosnia and Herzegovina borders with Croatia and Montenegro. That migrant route is very active. It is obvious that smugglers want to transfer migrants as many as possible before the winter," Mr. Krešić said. 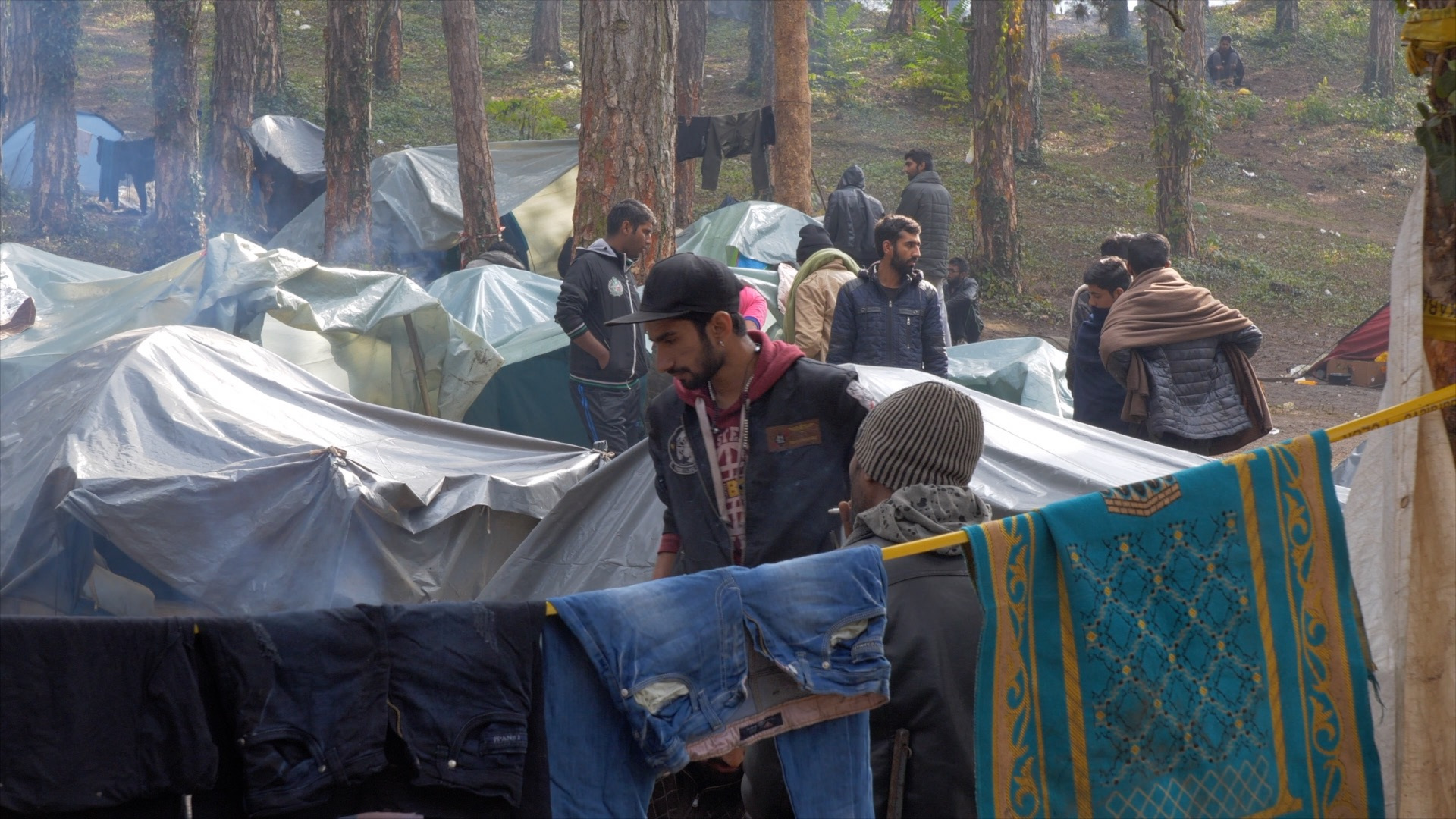 Migrants makeshift camp in the park close to the town center of Bihac, Bosnia. /CGTN Photo‍

Migrants makeshift camp in the park close to the town center of Bihac, Bosnia. /CGTN Photo‍

And Bihac is the place where that increasing pressure is very visible. It is hundreds of migrants that are here, in the makeshift camp, just a stone's throw away from Bihac's city center. Most of them are single males from Pakistan, India, Bangladesh and North African countries. They are waiting for an adequate moment to try to illegally cross the border into Croatia.

Just one border away from the EU

A location near the Izacic border crossing is where the migrants are most often trying to cross into Croatia. Local police officers are doing their best to prevent them, but they are overwhelmed by the sheer numbers of migrants.
Figures shared to CGTN by Refik Šabotić, the local border police commander of Izačić border crossing, are just confirming that. 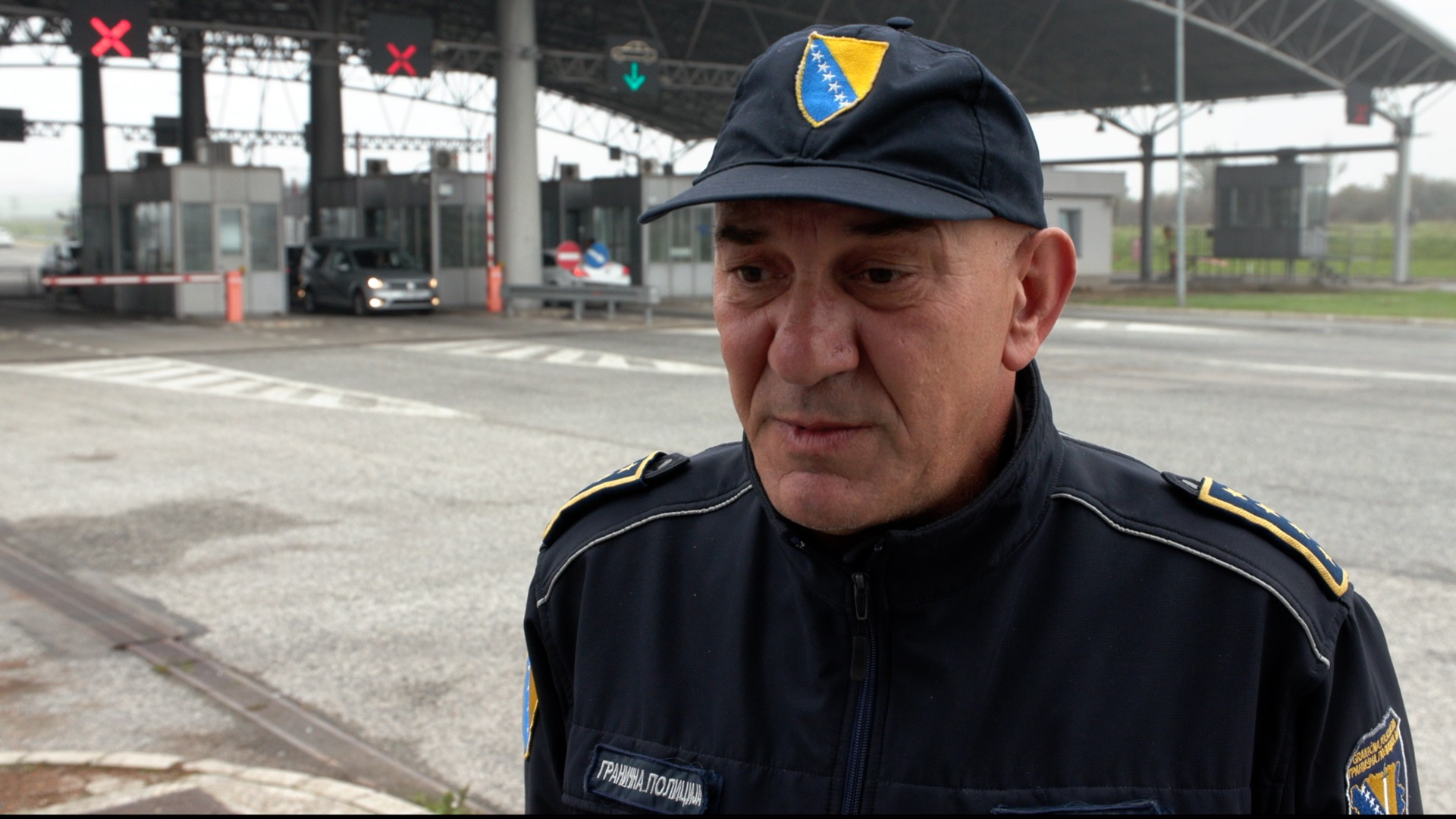 "During all of last year, we had 80 cases of attempted illegal border crossings by migrants. This year, it is hundreds of cases. We've caught only seven, and some 800 people tried to illegally cross the border."
The Bosnian police are just one hurdle for migrants trying to reach western Europe.
Ahead, are stricter Croatian and Slovenian police, who are trying to protect the EU borders. Their actions are not so welcomed by the migrants. Close to the border we met Ahmad, a migrant from Pakistan. He needed one-and-a-half years to come here from his country. And now, he's wondering whether he'll be able to finish his journey.
"Especially from here to crossing Croatia and Slovenia, their police are very bad. We do not want to stop in Croatia and Slovenia, but I don't know why they are not opening their roads for us. If they don't want us to enter their country, they should just let us cross to Italy. Italy is much more welcoming to migrants." 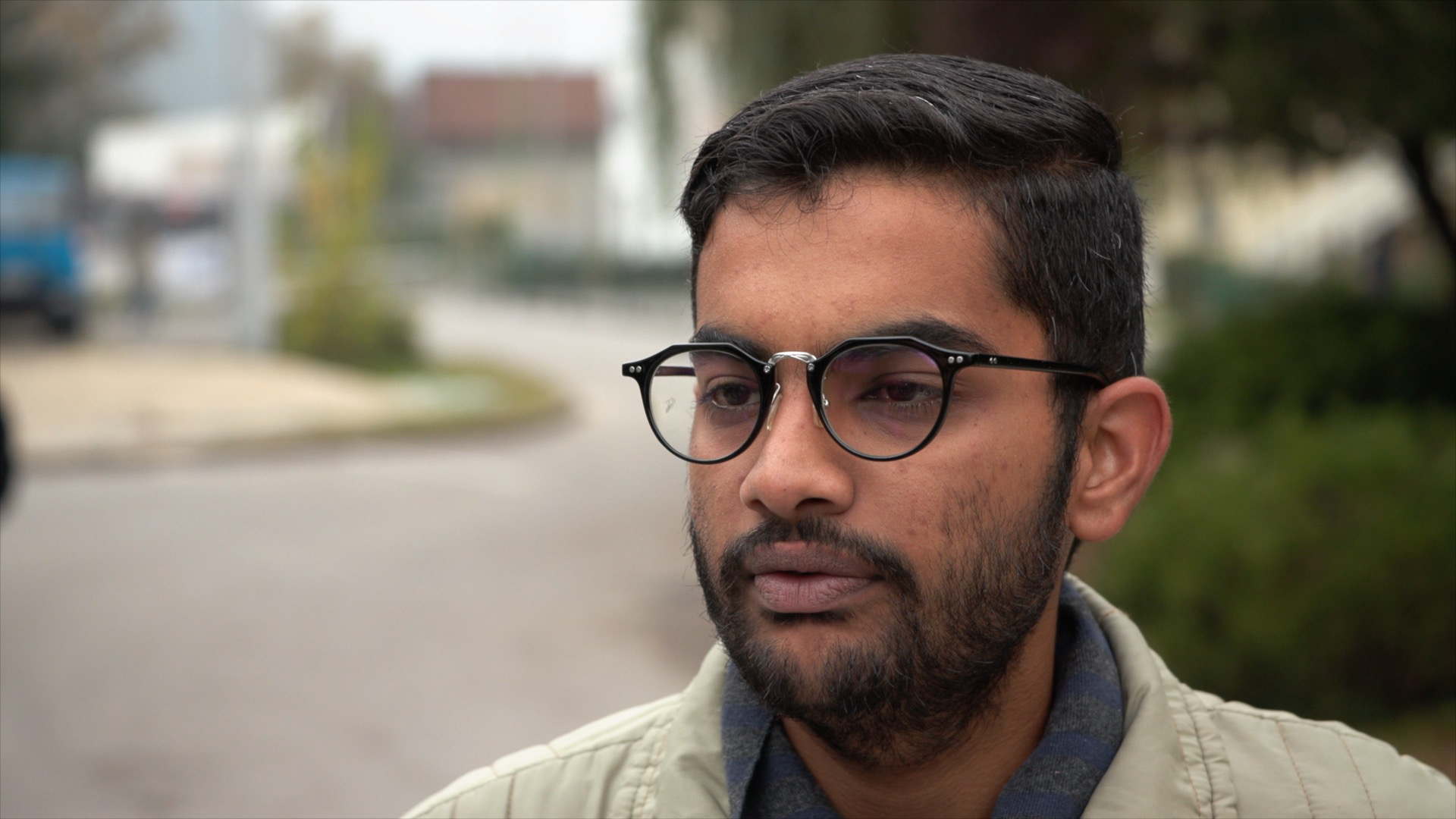 But the situation is not so simple as Ahmad would like it to be. In order to simplify it and beat the EU immigration system, many migrants turn to alternative solutions. In the former hotel now turned into a camp for migrants with families, we met with Peter Van der Auweraert, IOM Representative for Bosnia and Herzegovina.
"We have about 8 or 9 percent self-declared Palestinians, about 7 percent self-declared Libyans, and 20 percent self-declared Syrians," said Peter. "I would say that, in that category, maybe roughly 70 percent are actually not from those countries because people there are usually from North Africa -- from Algeria, Morocco, Tunisia -- and they self-declared as Syrians because they believe that will give them special status."
The exponential rise in the number of migrants here as well as rough terrain, which is almost impossible to close off, means that this route will continue to be open for quite some time.
(Top image: Migrants waiting for lunch at the unfinished student campus building in Bihac. /CGTN Photo)