Opinion: Can Theresa May realize her dream?
Thom Brooks 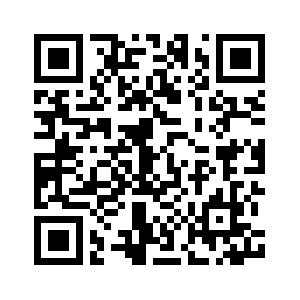 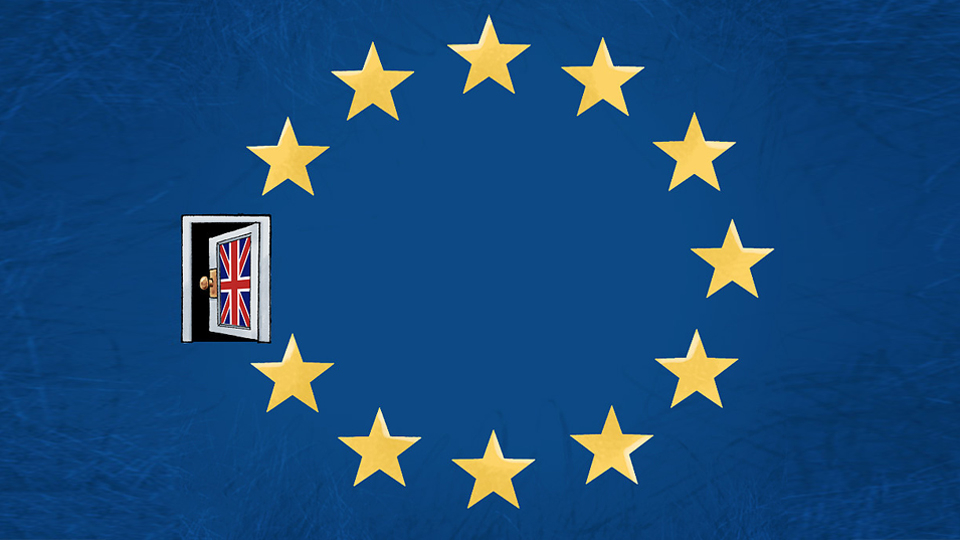 Editor’s note: Thom Brooks is the dean of Durham Law School and professor of Law and Government. The article reflects the author’s opinion, and not necessarily the views of CGTN.
British Prime Minister Theresa May is in a difficult position made worse by a series of bad judgments. After she campaigned for the UK to stay in the EU, May tried to unify a divided Tory Party with strong grassroots support for Brexit by promising to deliver a harder Brexit. She is the prime minister leading a decisive change in Britain’s relationship with the EU she never wanted and it shows.
Her first mistake was starting the process for leaving the EU before she had any plans for what Britain’s future relationship with Europe would look like. Part of this time was wasted fighting an unnecessary court battle she lost twice, arguing that she, and not Parliament, had the sole authority to trigger Brexit. More of this time was then wasted by calling a snap election, losing six weeks aiming to destroy the Labour Party only to lose her parliamentary majority and strengthen Labour’s hand.
May’s next mistake was in waiting until only last weekend to bring her Cabinet together for the first time to agree on a Brexit position. If done at the start, the government’s main positions would have been clarified and a unity of purpose secured long before talks concluded. But leaving it all so late has meant two Secretaries of State immediately resigned followed by junior ministers every day since. 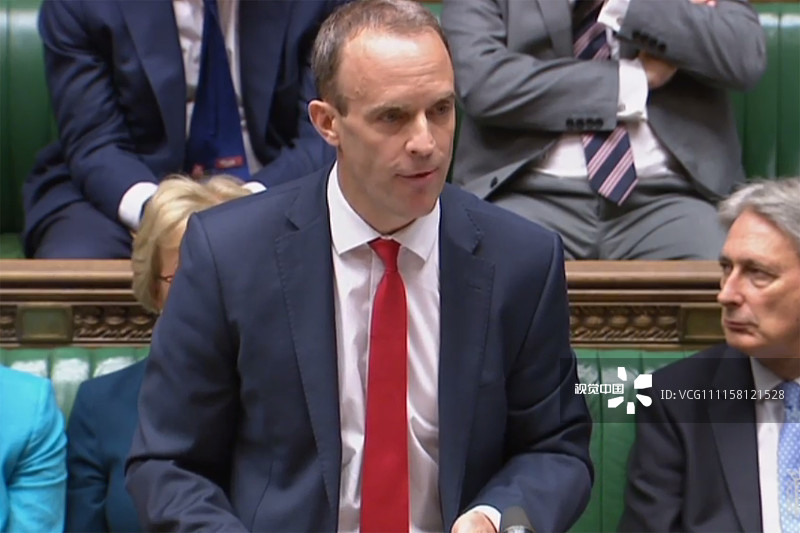 A video grab from footage broadcast by the UK Parliament's Parliamentary Recording Unit (PRU) shows Britain's Secretary of State for Exiting the European Union (Brexit Minister) Dominic Raab speaking in the House of Commons in London on July 12, 2018. /VCG Photo

A video grab from footage broadcast by the UK Parliament's Parliamentary Recording Unit (PRU) shows Britain's Secretary of State for Exiting the European Union (Brexit Minister) Dominic Raab speaking in the House of Commons in London on July 12, 2018. /VCG Photo

This has lost her the support of the Foreign Secretary Boris Johnson, who had spearheaded the successful Vote Leave campaign, and Brexit Secretary David Davis who has been involved in talks from the start. This means that her new Brexit Secretary Dominic Raab comes to the table when it’s virtually too late, having no role in any key talks. Yet he will be the one to help agree on a final deal in 90 days. Things could not go worse at a worse time.
When David Cameron called for an EU Referendum, his aim was to end division in his party. The result is the Tories are now in open civil war and the referendum has split the country. As US President Abraham Lincoln once said, "A house divided against itself cannot stand." The need for unity is never more urgently needed.
The government has published its White Paper spelling out in greater detail the Chequers plan that has led to daily resignations. This will only lead to more disappointment. Her attempt at finding a compromise rest on technicalities that will further confuse and alienate the public while raising doubts about how accurate her reassurances are compared to the fine print. 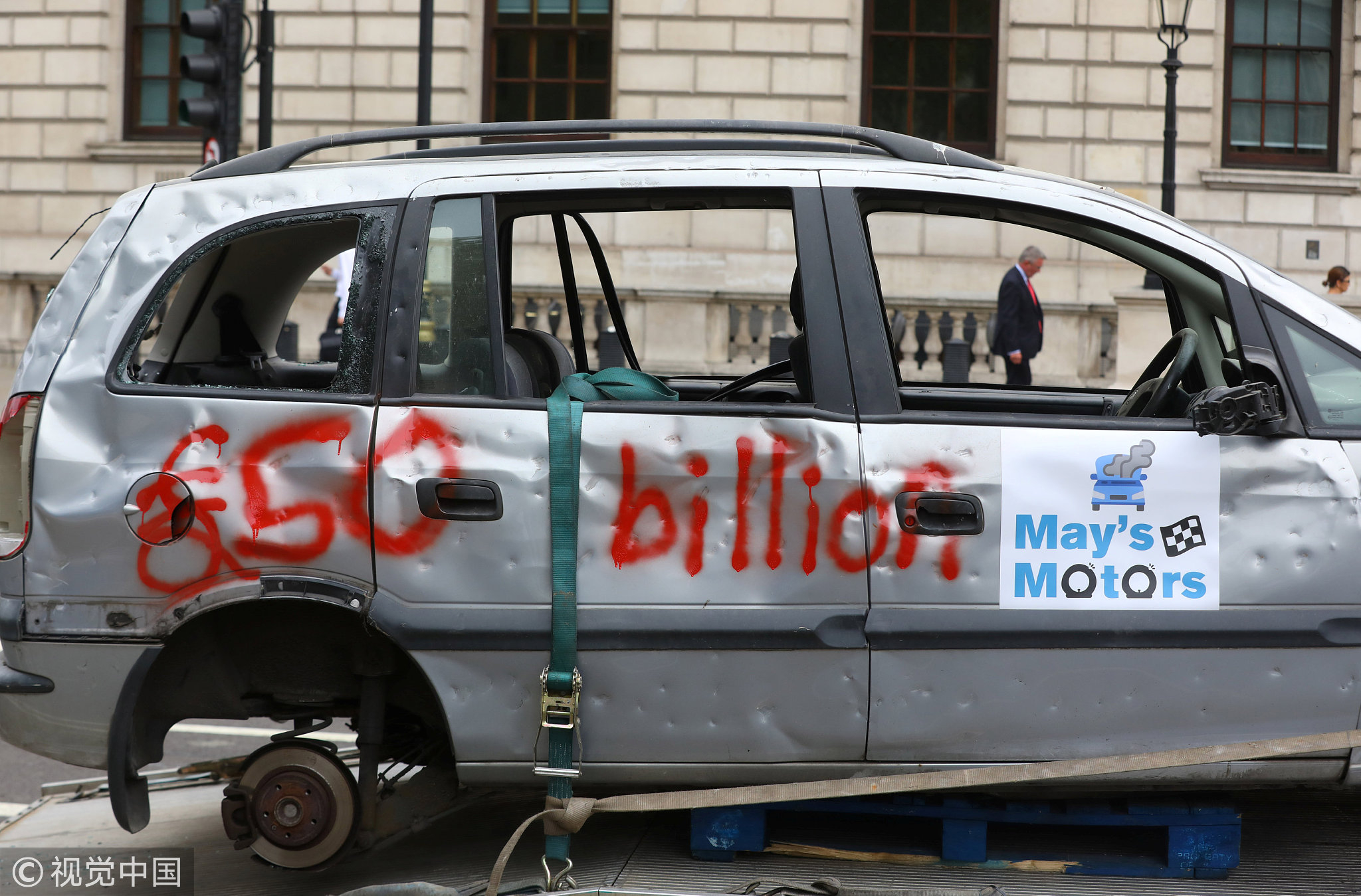 A banged up car decorated with a banner saying "For sale – but no one's buying May's Brexit banger" is driven around Parliament Square on July 12, 2018 in London, England. /VCG Photo‍

A banged up car decorated with a banner saying "For sale – but no one's buying May's Brexit banger" is driven around Parliament Square on July 12, 2018 in London, England. /VCG Photo‍

For example, May promises to reject any customs union but instead favors a “facilitated customs arrangement” which will not sound that different. This can only happen if a non-existent technology was used, which will take several years – and beyond the planned transition period – to implement. There’s no plan for what to do in between leaving and getting this work completed – much like there is no chance the European Union will accept freedom of goods but not people and services.
This leads us to the biggest of her bad judgments. May’s Brexit plan will neither make good on the empty promises of Vote Leave or calm fears of those wanting to Remain. But the main audience is the British public, not Brussels. Her plans are dead on arrival as they cut across clear EU red lines. All she can hope for is being looked at by voters as someone who took the referendum result she didn’t want seriously with a genuine statesmanlike attempt at delivering it.
These past mistakes cannot be undone. May should have had a full Cabinet meeting before triggering the Brexit process; there should have been Cabinet unity instead of counter-briefings by her own Secretaries of State and a unity of purpose from the start. After her snap election erased her majority, she should have taken the high ground and called for a bipartisan unity coalition bringing the Tories and Labour MPs together to negotiate a Brexit deal in the national interest. But none of this happened. 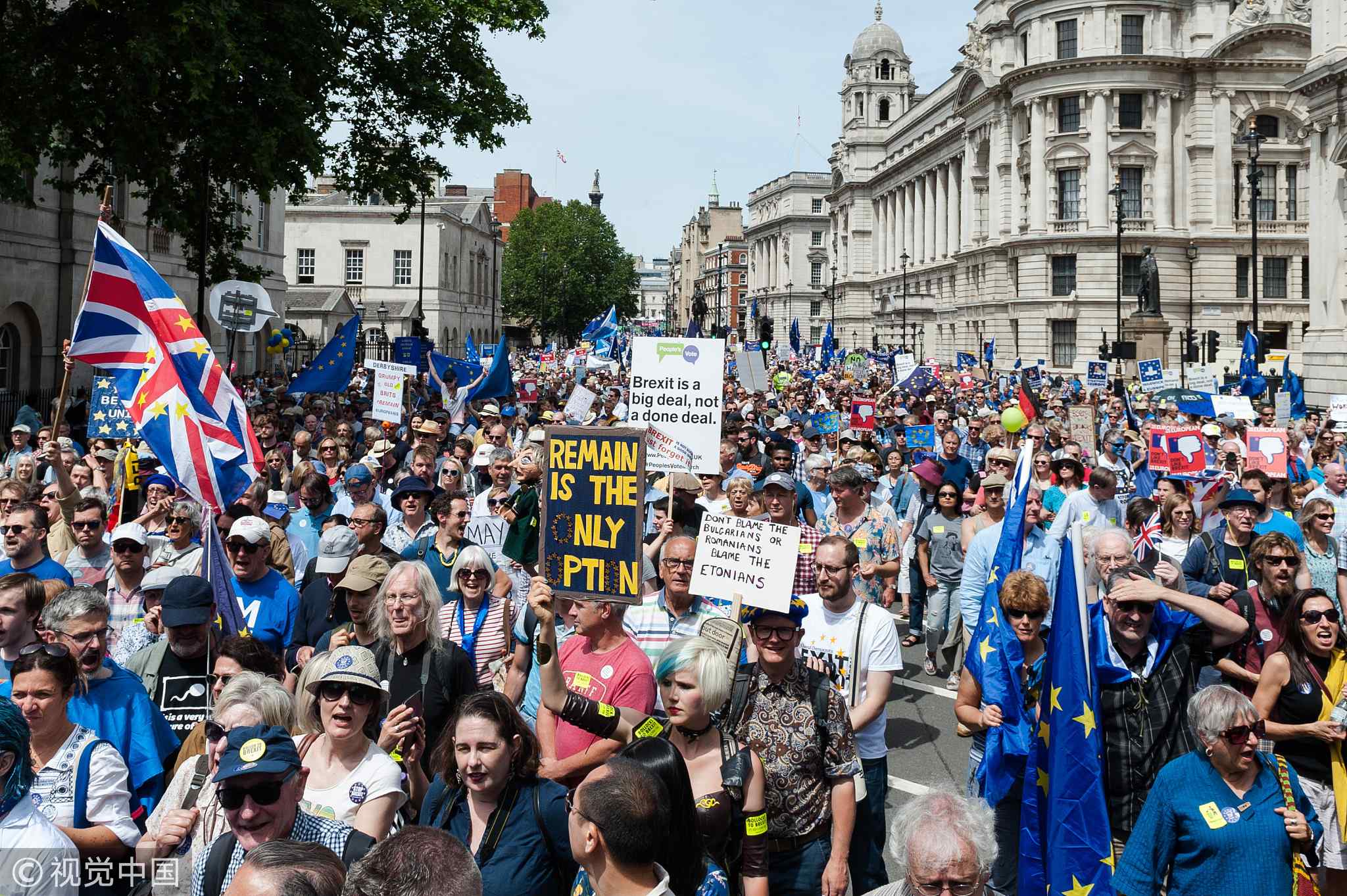 Anti-Brexit supporters take part in People's Vote march in central London followed by a rally in Parliament Square on a second anniversary of the Brexit referendum, June 23, 2018, in London, England. /VCG Photo‍

Anti-Brexit supporters take part in People's Vote march in central London followed by a rally in Parliament Square on a second anniversary of the Brexit referendum, June 23, 2018, in London, England. /VCG Photo‍

A no-deal outcome looks more likely now – and the worst possible consequence for both the UK and EU. It’s in their interests to have a deal even if both hope to gain advantages at the expense of the other from it. The right thing to do for the government is to accept the responsibility for an amateurish start and request a time extension on talks. This White Paper is poor but finally, it is a start. It won’t be revised into an agreeable form by October so more time is needed. Either the prime minister does the right thing at last and asks for it or she should hand the keys to 10 Downing Street to someone who will.
Delaying Britain’s exit from the EU will displease hardliners alone. The best way to respect the EU referendum isn’t to leave at any and all cost for its own sake, but to do so responsibly. It isn’t too late but it soon can be unless we see real leadership fast.