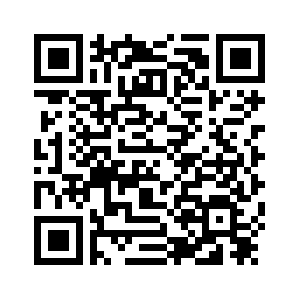 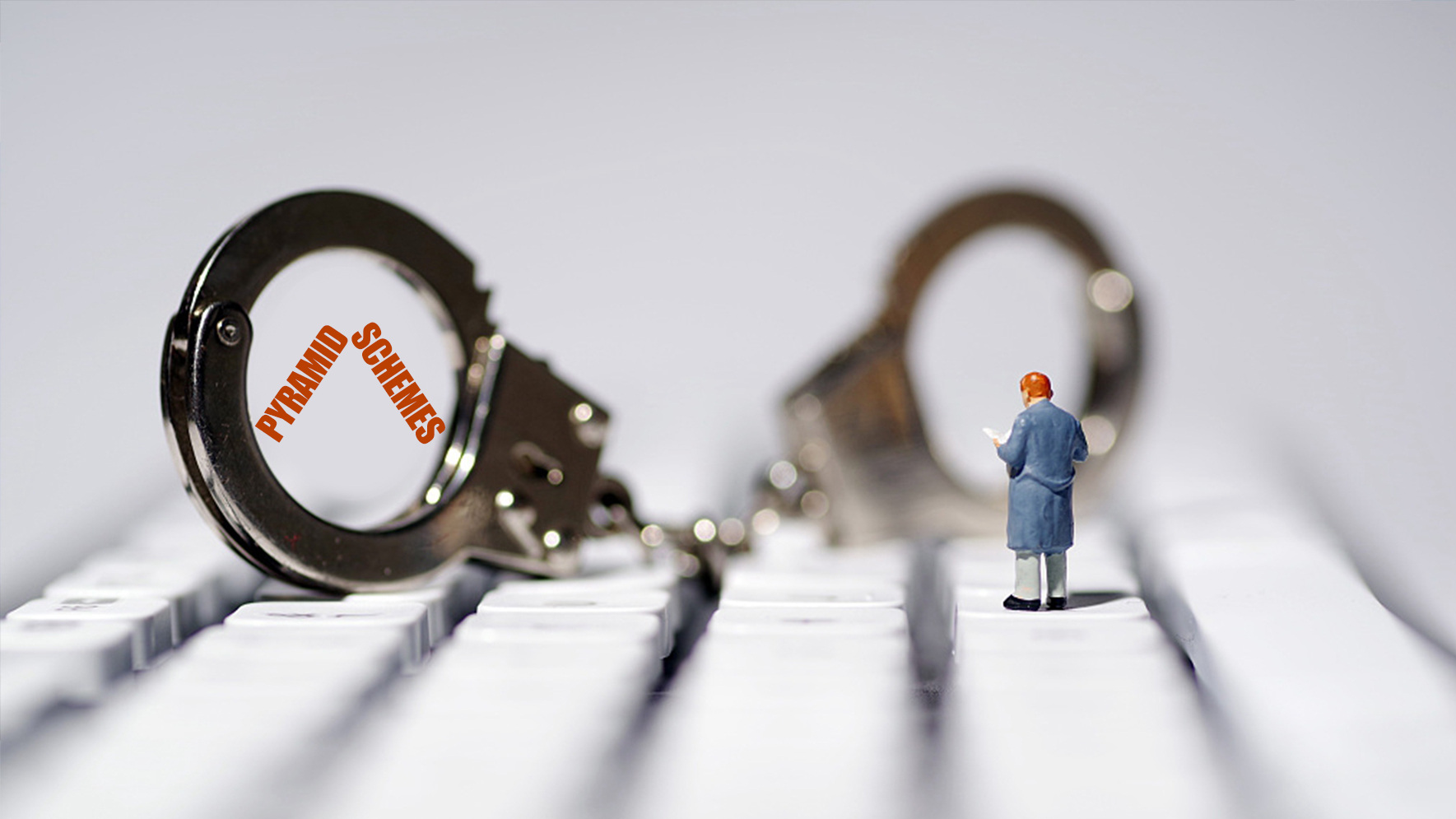 ‍For victims who escape from pyramid sales scams, the experience acts as a lesson of a lifetime.
"Losing money hurts, but what hurts deeper is that my soul was 'locked'," said a 26-year-old, surnamed Wang, from Hebei Province, to CGTN Digital. She was misled into the scam by a relative and had sold financial products for nearly a year.
"Now I pay much more attention to news about pyramid schemes. Every time I read the news, the smiles and voices of some people I've met occur in my mind," said Wang, recalling her experience. "It's always many people, a large crowd I've met here and there. Everyone is talking about big terms, like the Chinese Dream."
What has happened recently did attract Wang's attention. 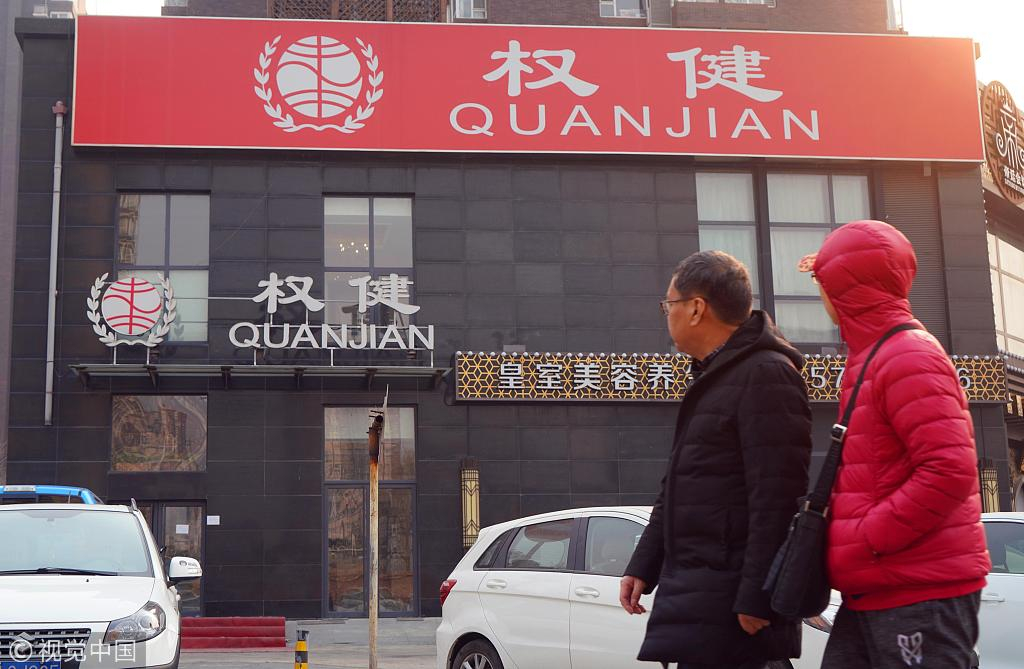 Police in north China's Tianjin Municipality detained 18 suspects from health product company Quanjian Group, including its founder, 51-year-old Shu, after the company's practice of pyramid selling and exaggerated advertising was exposed by the media, according to investigators on January 7. Two others have been released on bail pending trial.
Senior managers from Hualin Group were detained by police in Huanghua, a county-level city in Cangzhou, north China's Hebei Province, according to the local official WeChat account on January 15. The company, which sells health care supplements and massage machines, was the second to be accused of pyramid selling.
Infinitus (China), a health product giant, also came under fire recently after a mother in northwest China's Shaanxi Province told the media that her three-year-old daughter was diagnosed with serious health problems after taking large amounts of so-called health products from the company.
Investigations are ongoing.
A nationwide campaign to crack down on irregularities as false advertising, counterfeit and low-quality products in the health product market as well as illegal direct selling and pyramid selling has been launched by Chinese authorities since January 8. The campaign will last over three months, reported Xinhua News Agency, citing the State Administration for Market Regulation.
Both Quanjian and Hualin have a direct selling license, and direct selling is legal in China. However, pyramid schemes are not. The reason why they are investigated is that pyramid selling practiced illegally under the cover of direct selling.
In the eyes of the general public, the lines between the two are blurred; for experts and insiders, it is the loopholes that are exploited by those who want to make quick money, even a regulation has been there.

In order to regulate the market, the Chinese government enacted a law in 2005, Regulation of Direct Sales and Regulation on Prohibition of Pyramid Selling. 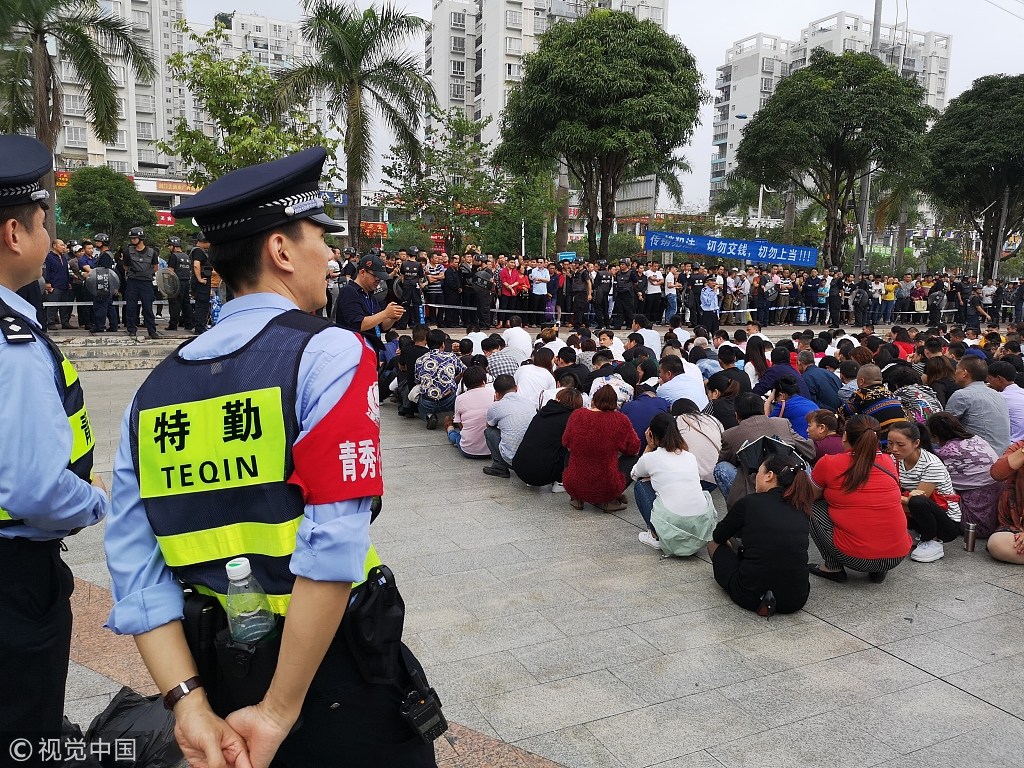 According to the regulation, pyramid selling is defined as: Organizers keep recruiting new members and pay the new members based on the number of people they recruit themselves or require the newly recruited to pay a certain fee as preconditions for joining in the organization.
As to direct selling, it means that products are sold to the end users directly.
"From my point of view, direct selling means single-level marketing," Jiang Desheng, who has campaigned against pyramid selling since 2007, told CGTN Digital. However, what most direct-selling companies value is the model of multilevel marketing, Jiang said.
Multilevel marketing is actually pyramid selling, according to Qiao Xinsheng, a professor at Zhongnan University of Economics and Law.
For direct selling companies, they do have difficulties practicing this model borrowed abroad.
"Without any acquaintances, it's difficult for a salesperson to knock open the door of strangers in China. For direct-selling companies desperate to survive, they have to turn to family members, relatives or friends," Qiao Xinsheng said.
"When a direct-selling company becomes centered on managing relations and making profits by charging commissions from those newly recruited indefinitely instead of selling its products, it has become a pyramid selling company," he said, pointing out that it is because of the blurred lines that direct selling was once banned.
The Chinese government banned direct selling in 1998.
However, after joining the World Trade Organization (WTO) in 2001, China had to reopen its market to non-store sales. Since then, the practice of direct selling has come back to the country, considering it is legal in many nations. 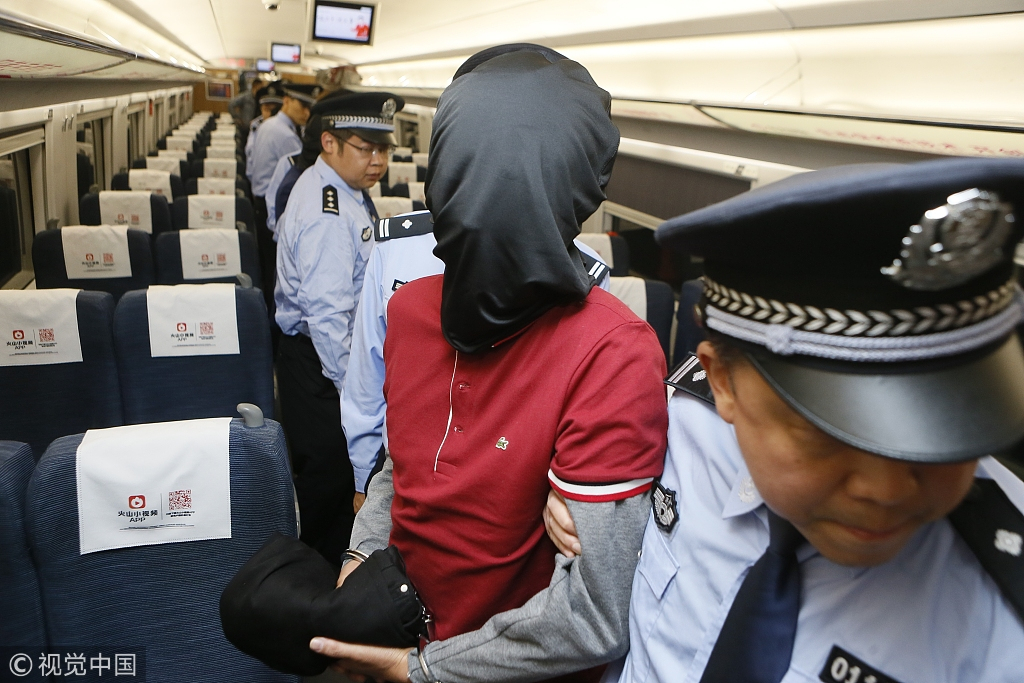 A principal culprit surnamed Zheng, who practiced pyramid schemes online under the cover of a "blockchain" business is taken to Xi'an, Shaanxi Province, April 17, 2018. /VCG Photo

A principal culprit surnamed Zheng, who practiced pyramid schemes online under the cover of a "blockchain" business is taken to Xi'an, Shaanxi Province, April 17, 2018. /VCG Photo

Health products or cosmetics tend to be the products sold by direct-selling companies or those practicing pyramid schemes. "This is due to lack of supervision on pricing for direct-selling products, usually health products or cosmetics," said Jiang Desheng.
Considering the pricing range is quite wide for health products or cosmetics, it is difficult for consumers to differentiate how much the products are really worth. Finally, consumers are the ones misled when exaggerated and even false advertising is used, according to Jiang.
For pyramid schemes practitioners, exaggerated or false advertising works, but it is far from being enough.
Brainwashing is a "technique" often referred to by pyramid selling organizers. Because of this, pyramid selling is dubbed a "business cult."
Most of those trapped in pyramid schemes will become "refugees" in the game of money distribution, Li Xu, founder of the China Anti-Pyramid Promotional Association (CAPPA), told CGTN Digital.
"Practitioners are usually those who have been brainwashed. Once engaged in the pyramid selling industry, they are not down-to-earth any more. Even after failure in making money from selling some products, they will switch to others. As to those who consider leaving the industry after repeated failures, organizers will try to get them brainwashed and tell them to stick to it. Considering the price of products are much higher than their value, finally, pyramid schemes practitioners find themselves in a situation like this: their connections become used up and no buyers are found anymore,” said Jiang.
Li seeks to help those trapped to get out of the scam. "Not everyone could be led out of the trap," he said, citing a "proverb" popular in the pyramid selling industry: "Those who have never been involved don't have a say."
It can take five to six hours to steer those who are not too deeply involved back to normal life. For others, one or two days, said Li.
26-year-old Wang is one of the many led out of the scams by Li. 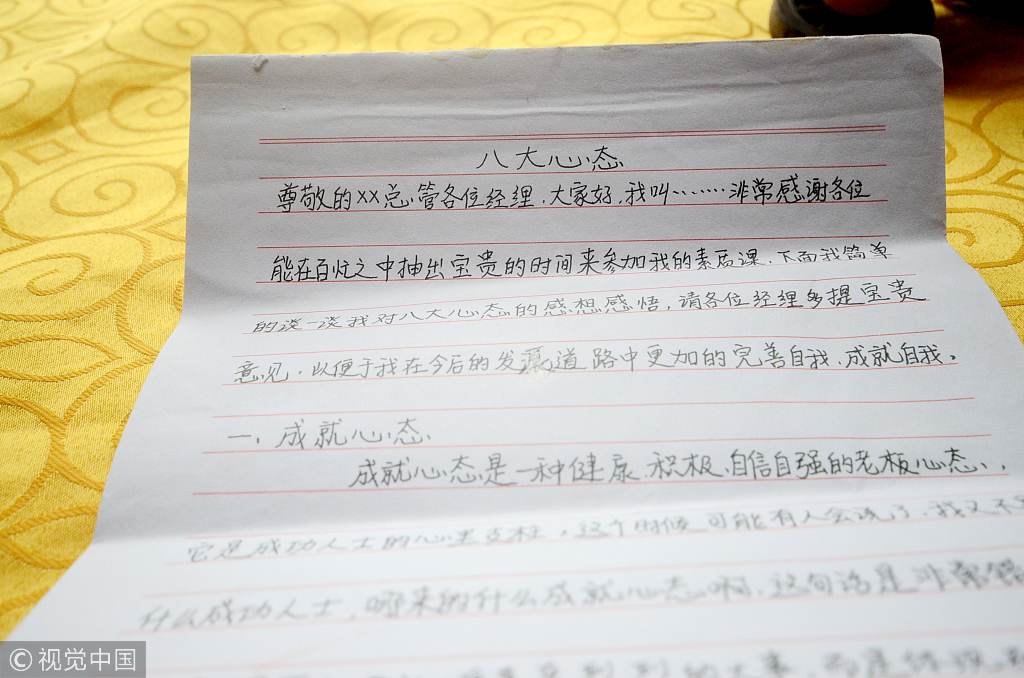 A government work report put Huanghua's revenues in 2017 at 3.32 billion yuan (489.93 million U.S. dollars). The sales revenues generated by Hualin reached 3.9 billion yuan (577 million U.S. dollars) in 2017, according to dsdod.com, a webpage dedicated to the direct selling industry.
The revenues Hualin created is larger than that of Huanghua, the city its headquarters based in.
"As to the direct selling industry, it does create jobs for people and is a source of tax for the local government. However, in order to grow quickly, some direct selling companies keep an eye on what their subsidiaries do," said Jiang Desheng.
"The root cause for direct selling companies practicing pyramid schemes is due to lack of supervision on their marketing activities. Put it simply, it is local regulatory authorities who didn't respond in time to the illegal behaviors taken by direct selling companies," said Qiao Xinsheng.
"People who are trapped in the scams are pathetic, and hateful, too," said Li Xu, explaining that most of them are from the lower level of society, not satisfied with their living conditions, and thus want to make changes quickly.
Most of them are just hoodwinked, said Li.
"Most people don't think pyramid selling will get a chance to reach them, but actually it's not," said Jiang.
Even those with a higher educational level can be changed as long as they are in the environment, Jiang said. "Imagine you are in an environment isolated from the outside world: You are briefed with carefully selected information, lectures, and a bright future is described; People who boast of having made success in their lives show up and tell cheerful stories, you will tend to think you are the next one to make big money," said Jiang, pointing out that it is greed, weakness of human nature used.