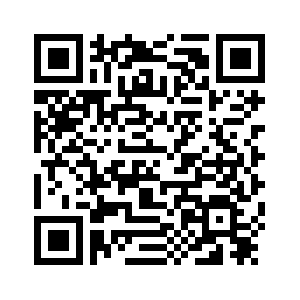 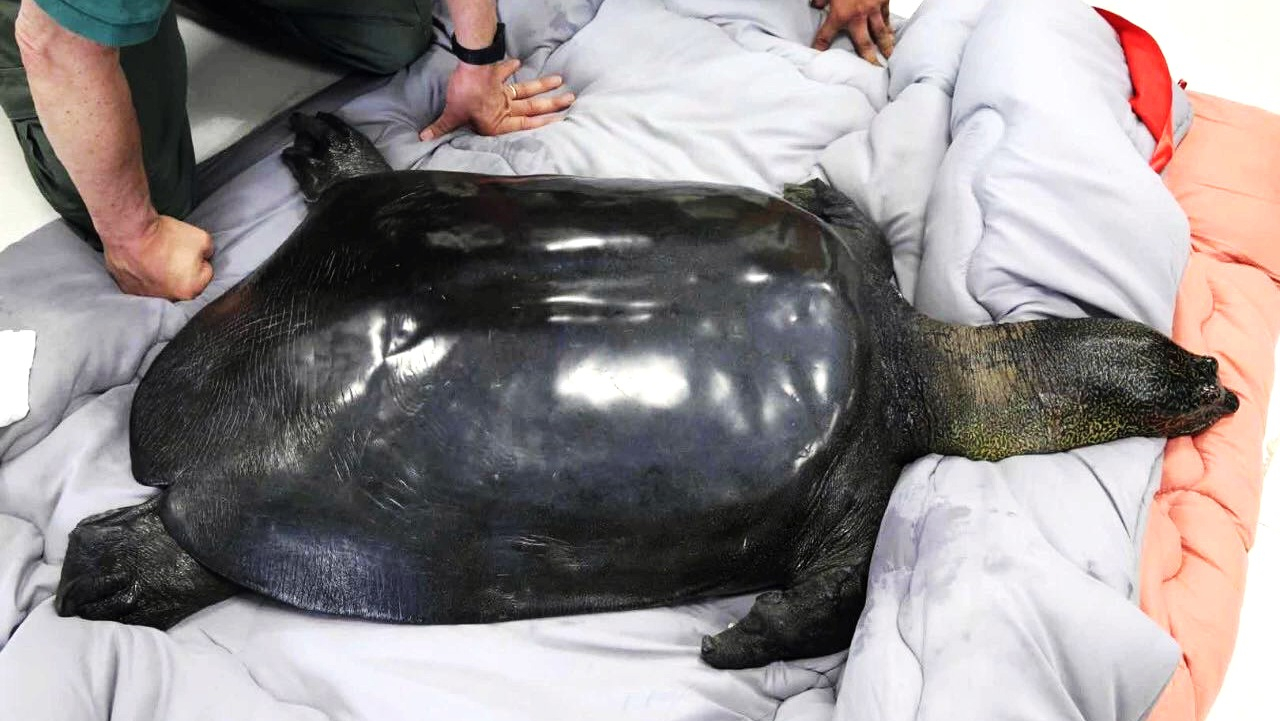 ‍The last known female Yangtze giant softshell turtle (Rafetus swinhoei) died during a fifth artificial insemination last Saturday in Suzhou Zoo in China's eastern Jiangsu Province, signifying the defeat of efforts to sustain this endangered species.
A joint team made up of domestic and international experts from the zoo, the Wildlife Conservation Society (WCS) and the Turtle Survival Alliance (TSA) is working on the exact cause of death. 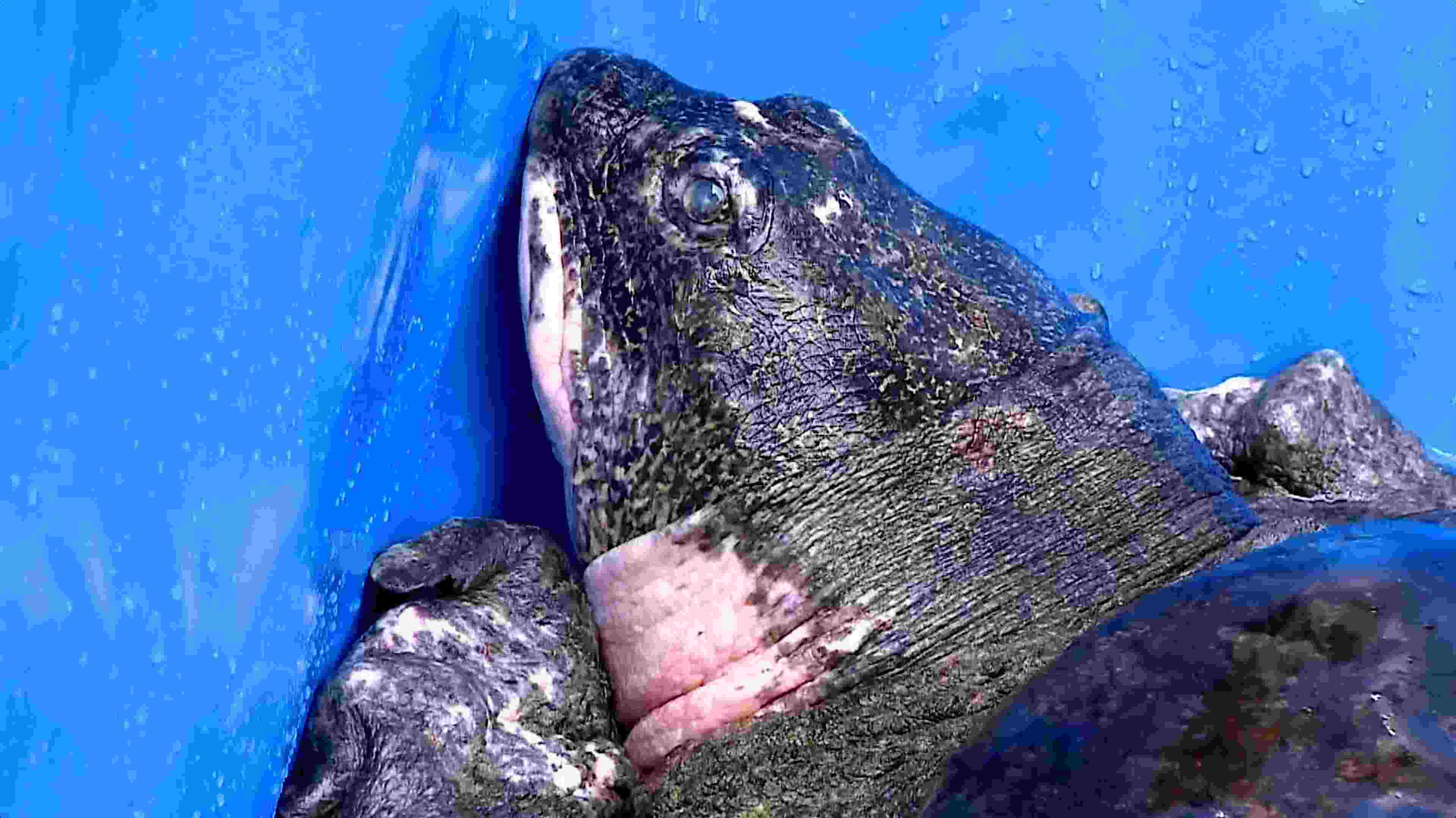 In search of a bride 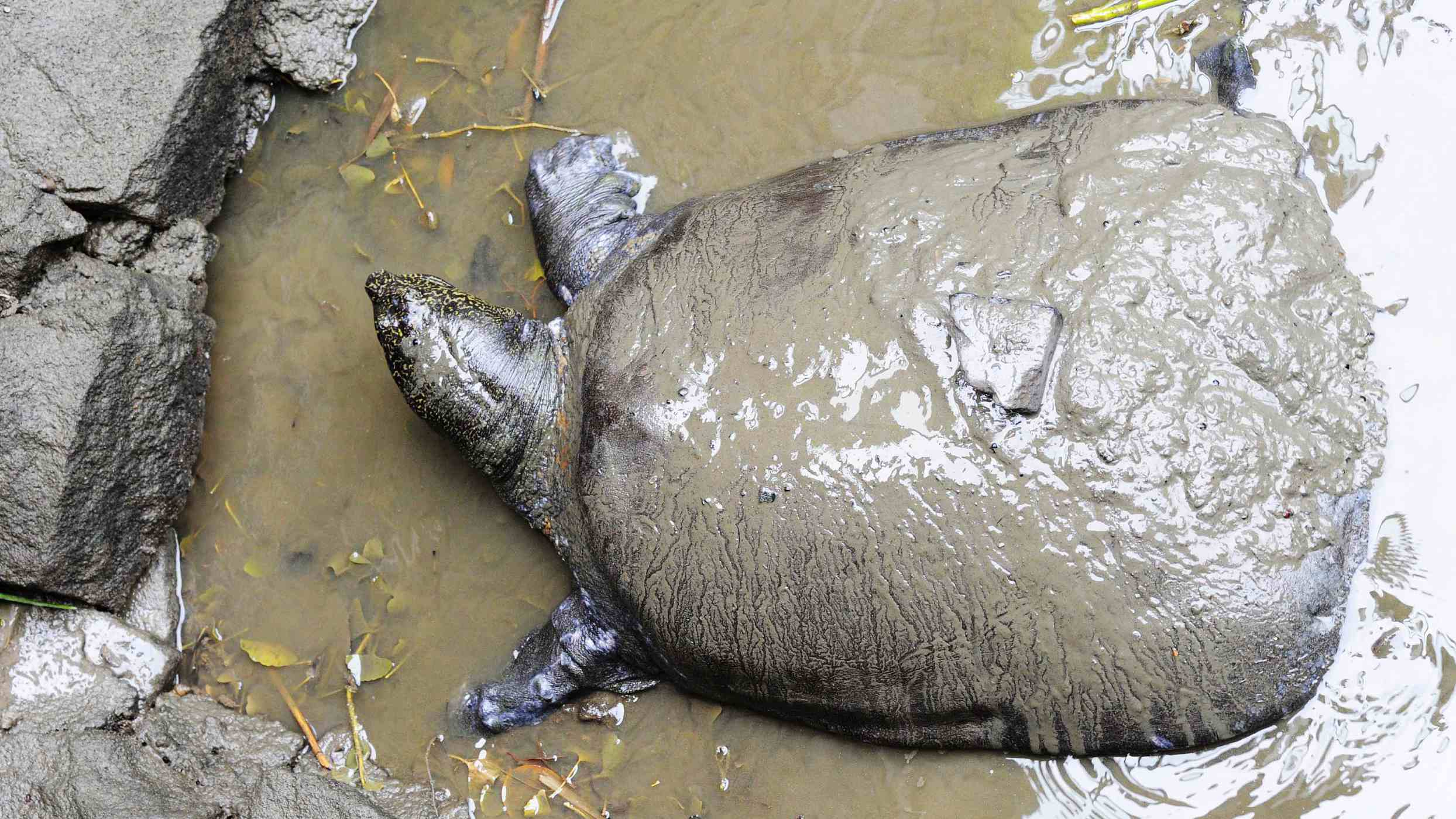 A marriage with no child 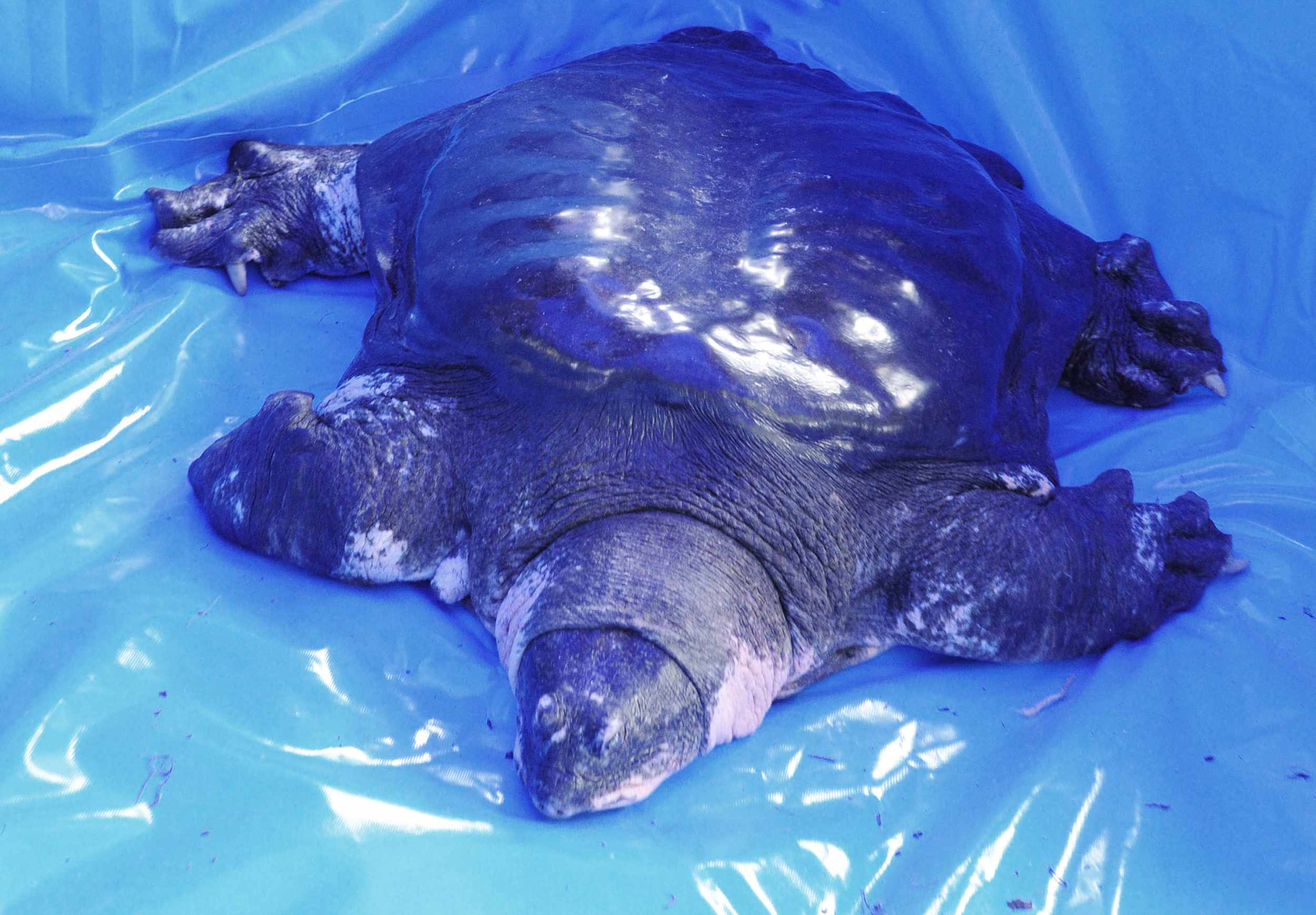 A male Yangtze giant softshell turtle is seen at Suzhou Zoo on May 6, 2015, in Suzhou, Jiangsu province of China. /VCG Photo

A male Yangtze giant softshell turtle is seen at Suzhou Zoo on May 6, 2015, in Suzhou, Jiangsu province of China. /VCG Photo

On May 6, 2008, the female Yangtze giant softshell turtle was safely transferred from her home at Changsha Zoo to the Suzhou Zoo. The same year, the new couple mated and over 100 eggs were delivered. Sadly, none was fertile.
From April to July in 2009, the female turtle laid four nests of eggs. There were fertile eggs among them this time but after artificial incubation, in less than a week the embryo died as it was still developing.
Experts suspected that the female Yangtze giant softshell turtle might not have taken in enough nutrients such as calcium, resulting in the thinness of the shell. However, they didn't give up after the first natural insemination.
Unfortunately, all fertile eggs born between 2010 and 2013 after the later procedures failed to turn into turtle babies. Because of the constant failure, they reluctantly turned to the last resort – artificial insemination. 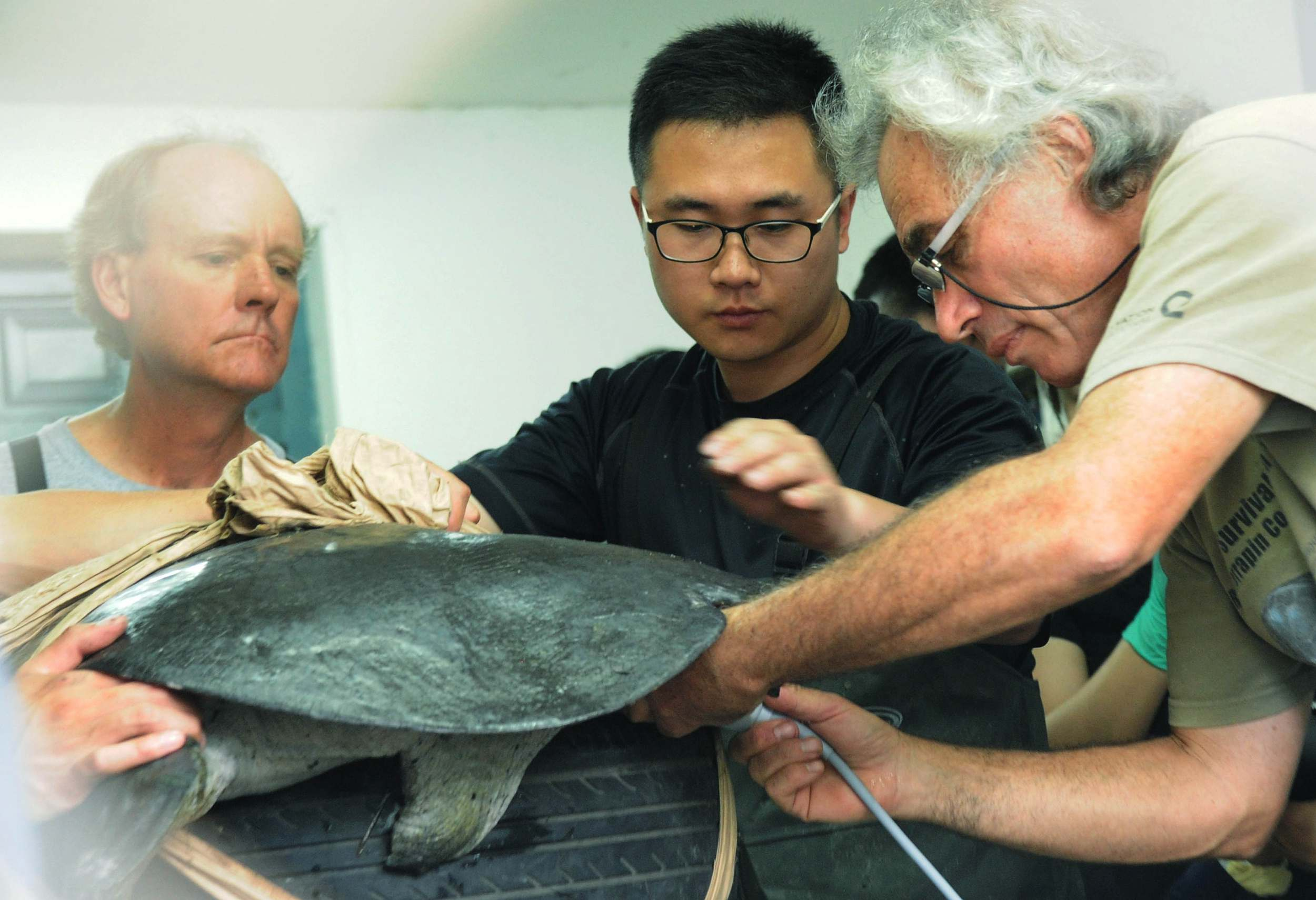 The summer of 2015 was unforgettable for experts as the first artificial insemination procedure began, during which they found out the other possible reason for infertile eggs – the damaged penis of the 100-year-old male turtle. Experts inferred that the male turtle was injured during a fight with other males.
Since the amount of semen collected from the male turtle was scarce with low vitality, the three artificial insemination procedures that took place in 2015 and 2016 all turned out to be failures. In 2017, two experts from the Leibniz zoo in Berlin, Germany joined the team and brought their most advanced appliances to make the fourth attempt. 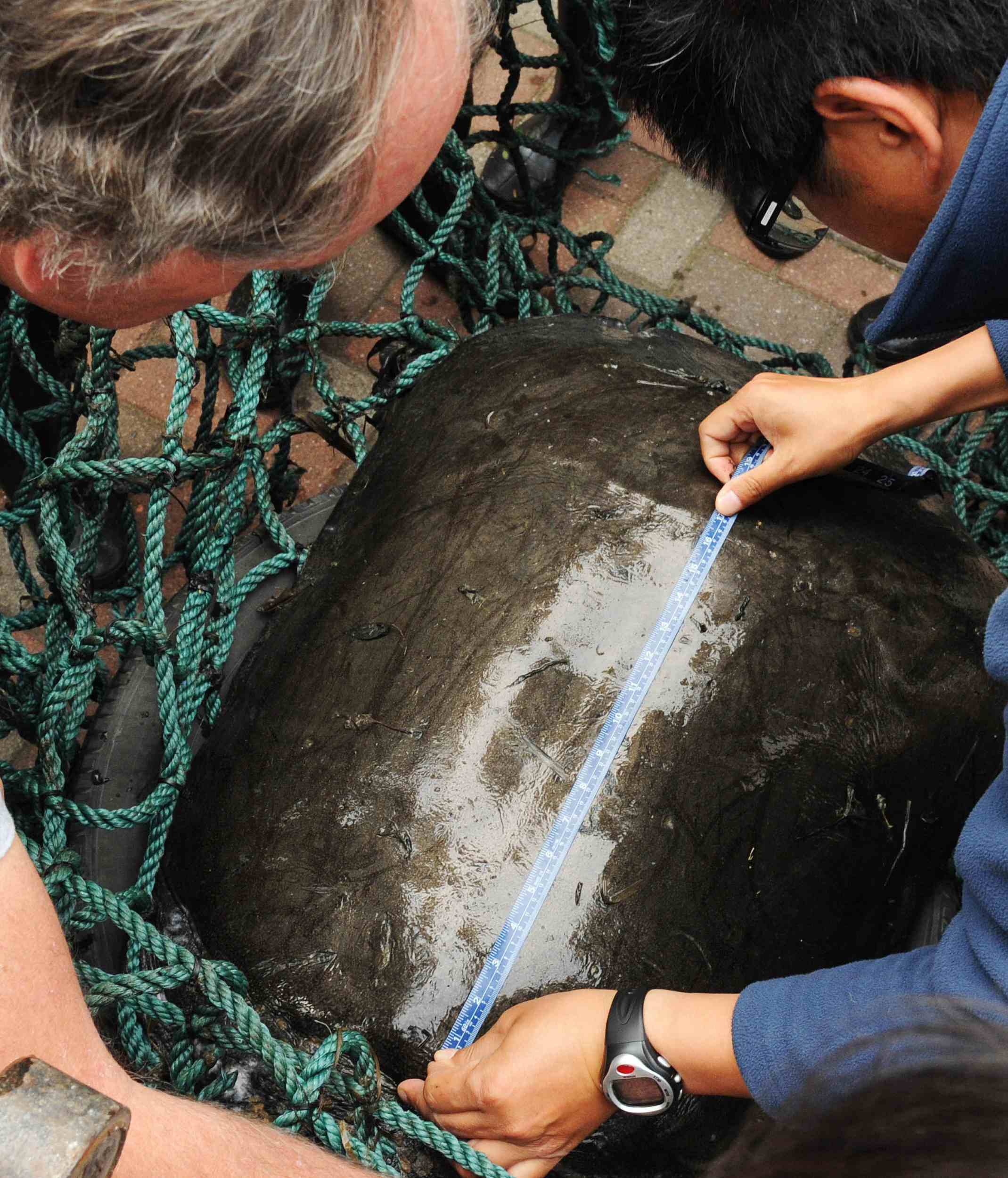 Even though experts were able to conduct insemination closer to the female turtle's ovary this time, no eggs were found afterward. The fifth attempt this year ended up in death. The last known female Yangtze giant softshell turtle left the world. Experts now can only put hopes in finding another bride, but will luck favor them this time?

Hope for the best

Species once on the brink of extinction like the crested ibis and the milu deer are lucky. With human intervention, their populations have recovered over the years. The number of the crested ibis increased from only seven in 1981 to over 3,000 now.
However, for species like the white northern rhino and the Yangtze giant softshell turtle, the men's efforts to save them seem futile. Will the future research help their populations recover again one day? We can only hope for the best.
(Cover image via CCTV)
(If you want to contribute and have specific expertise, please contact us at nature@cgtn.com.)