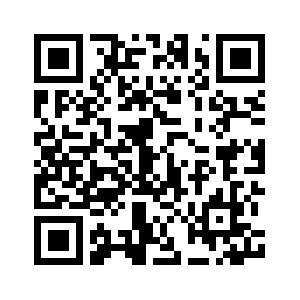 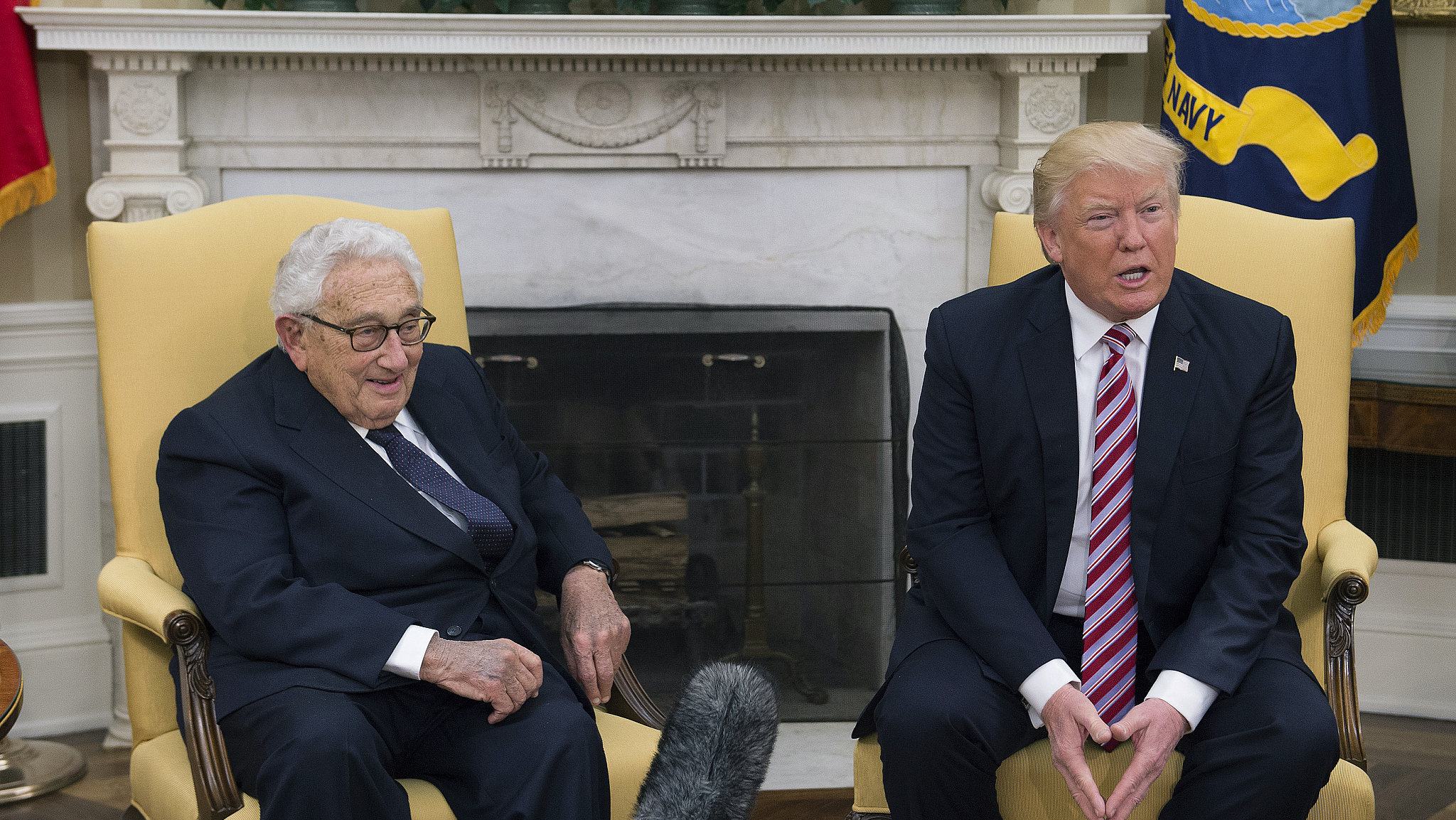 Editor’s note: As it stands, the summit between US President Donald Trump and the DPRK leader Kim Jong Un is off, but it could be back on. Hopes for the highly-anticipated meeting were dashed after Trump called off the planned June 12 talks, blaming “tremendous anger and open hostility”, but were revived again when the US president labelled Pyongyang’s response as “warm and productive”. On Friday night, Trump tweeted that "very productive talks" are underway with the DPRK about reinstating the summit.
On May 24, US President Trump unilaterally announced that he called off the planned summit meeting with Kim Jung Un scheduled on June 12, only three weeks away. Yet, the DPRK responded calmly as it read “we again state to the US our willingness to sit face-to-face at any time in any form to resolve the problem." Since the Trump-Kim summit is the high-stake one diplomatically, Trump’s abrupt act has aroused the various opinions around the world.
Republic of Korea's (ROK) President Moon Jae-in expressed deep regret over Trump’s decision to cancel his widely anticipated summit with Kim while UN Secretary-General Antonio Guterres vowed to urge the parties concerned to continue their dialogue to find a peaceful and verifiable way of denuclearization of the Korean Peninsula. 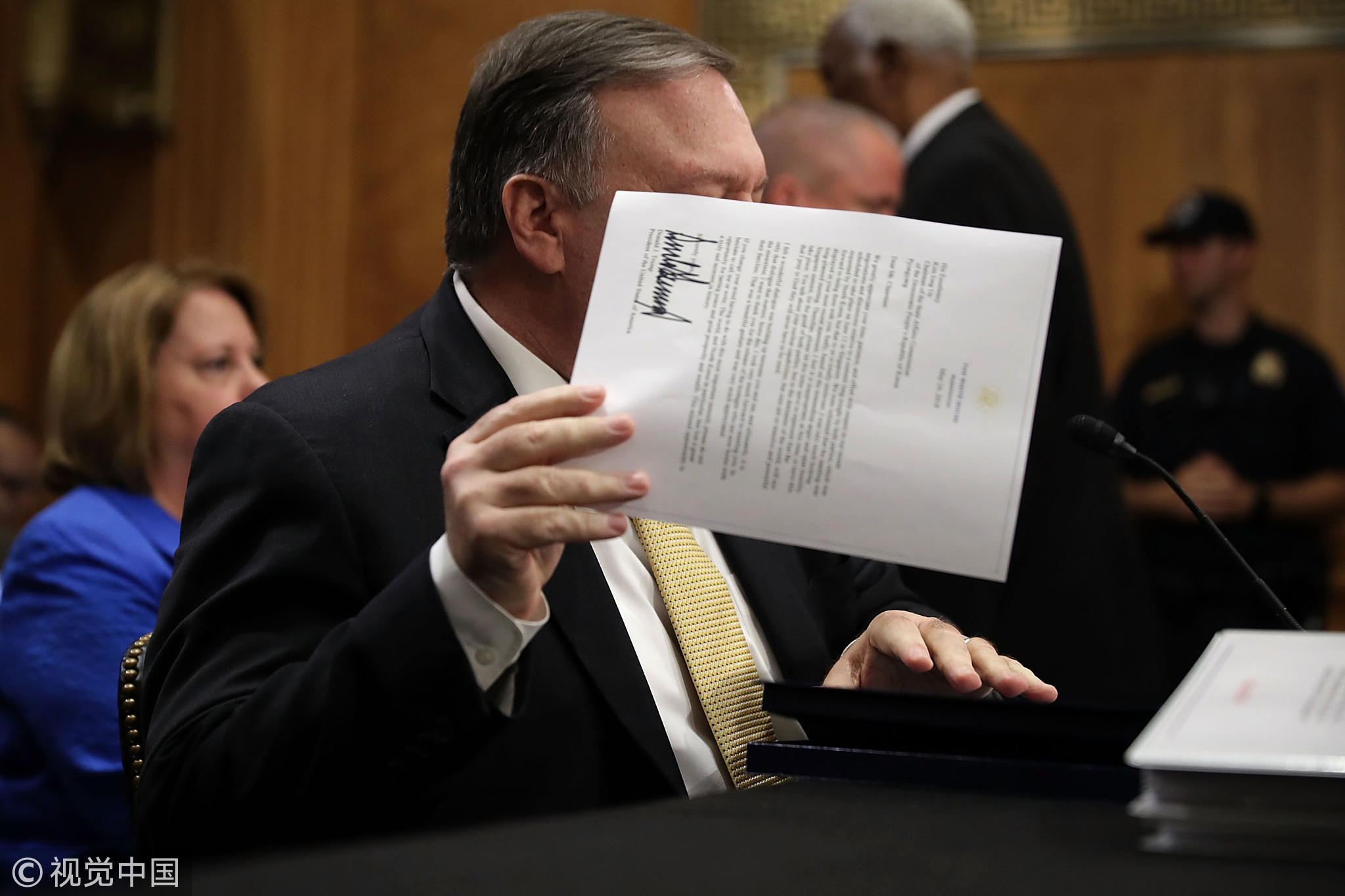 US Secretary of State Mike Pompeo pulls out a copy of President Donald Trump's letter to DPRK leader Kim Jong Un before Pompeo testifies to the Senate Foreign Relations Committee in the Dirksen Senate Office Building on Capitol Hill May 24, 2018. /VCG Photo.

US Secretary of State Mike Pompeo pulls out a copy of President Donald Trump's letter to DPRK leader Kim Jong Un before Pompeo testifies to the Senate Foreign Relations Committee in the Dirksen Senate Office Building on Capitol Hill May 24, 2018. /VCG Photo.

As the two largest neighbors of DPRK, China reiterated that since the détente on the Korean Peninsula is hard-won, all relevant parties, the US and the DPRK in particular, should speak and act in a way that is conducive to ensuring the dialogue and mutual respect. Russian President Putin put it more frankly as he said “in order to move significantly towards a de-escalation on the Korean Peninsula, Kim Jong Un did everything he had promised to do.” His remarks were put at a joint press conference with French President Macron.
In an open letter to inform Kim of his intent to cancel the summit, Trump did blame Pyongyang for the collapse of the historic event to be held in Singapore. He said "based on the tremendous anger and open hostility displayed in DPRK’s most recent statement, I feel it is inappropriate, at this time, to have this long-planned meeting."
Actually, Trump’s decision to cancel the summit came just one day after the DPRK accused US Vice President Mike Pence of making irresponsible remarks on the comparison between Libya and the DPRK. Yet, it is more controversial that shortly after DPRK's demolition of its "famous and secret" nuclear test ground in Punggye-ri “to insure the transparency of discontinuance of nuclear tests", Trump responded with the surprising letter released by the White House. This is not the way of the classical diplomacy espoused by any responsible great power in the world.
However, from the very beginning when the summit between Kim–Trump was facilitated by President Moon, the US has talked publicly and privately of using “the maximum pressure on the DPRK”. 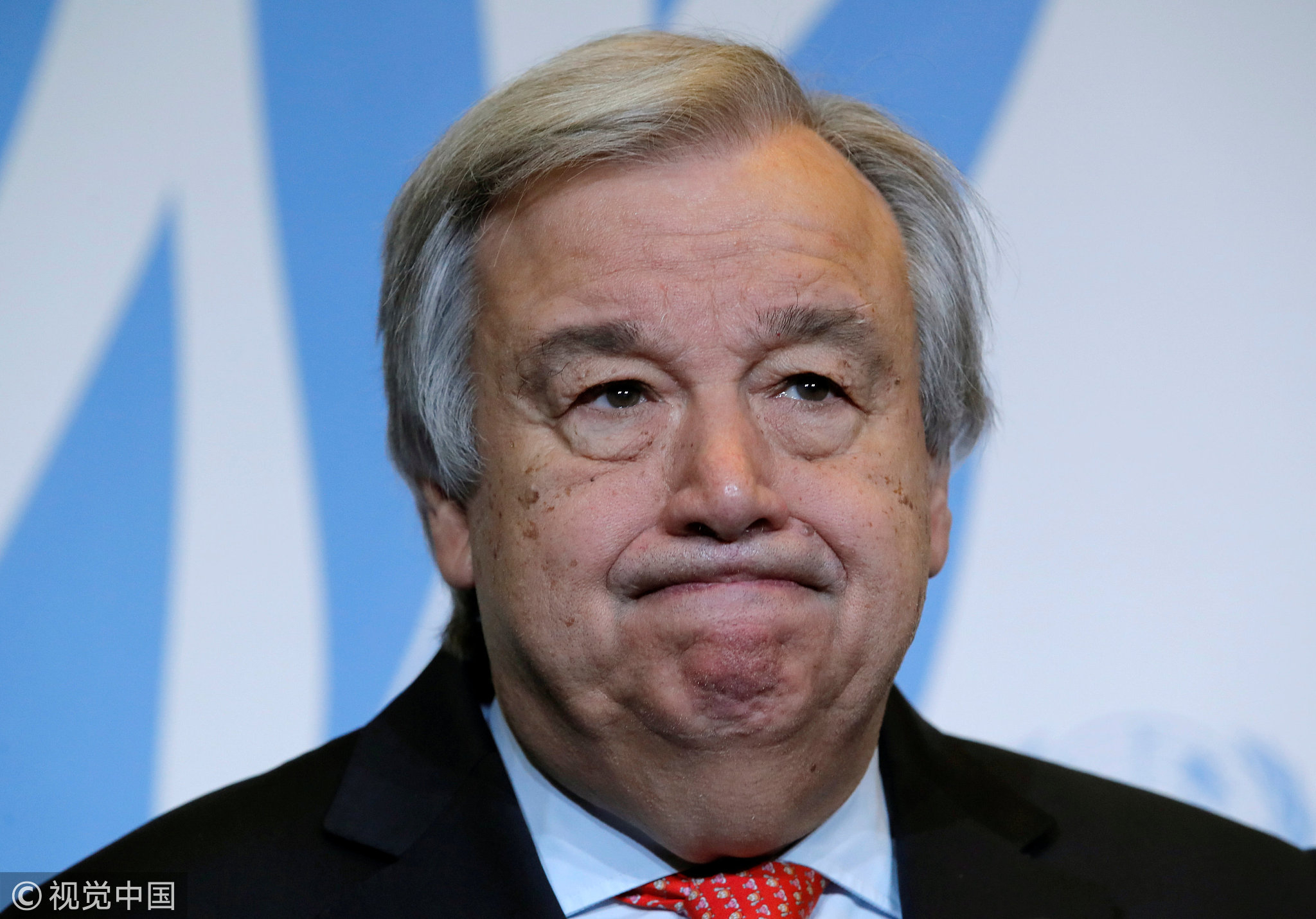 United Nations Secretary General Antonio Guterres gives a statement after delivering a speech on disarmament and denuclearization at the University of Geneva (UNIGE) in Geneva, Switzerland, May 24, 2018. /VCG Photo.

United Nations Secretary General Antonio Guterres gives a statement after delivering a speech on disarmament and denuclearization at the University of Geneva (UNIGE) in Geneva, Switzerland, May 24, 2018. /VCG Photo.

In foreign affairs where states act as sovereign units, as Kissinger has defined, no one like the US has been so much pragmatic in the day-to-day conduct of diplomacy and in the meantime so much ideological in the pursuit of its historic moral beliefs.
As a result, the United States has so passionately asserted that its own values, power and order are universally applicable with no concerns with others’ feeling.
For instance, since Trump entered the White House, his behaviors have perplexed the world. Recently, Trump quarreled with Russia on a series of issues, he initiated the trade war with China, he led airstrikes against Syria with its allies - Britain and France; and he pulled out of the Iran nuclear deal and reinstated its sanctions on Iran.
Trump's moves have sparked concerns and opposition from the other parties to the deal, as former President G. W. Bush warned him that such move would undermine future efforts to solve the issues in the Middle East through talks. Yet, Trump went further to recognize Jerusalem as the Capital of Israel by moving US embassy to the city on May 14. Now he unilaterally called off the well-planned summit with Kim. 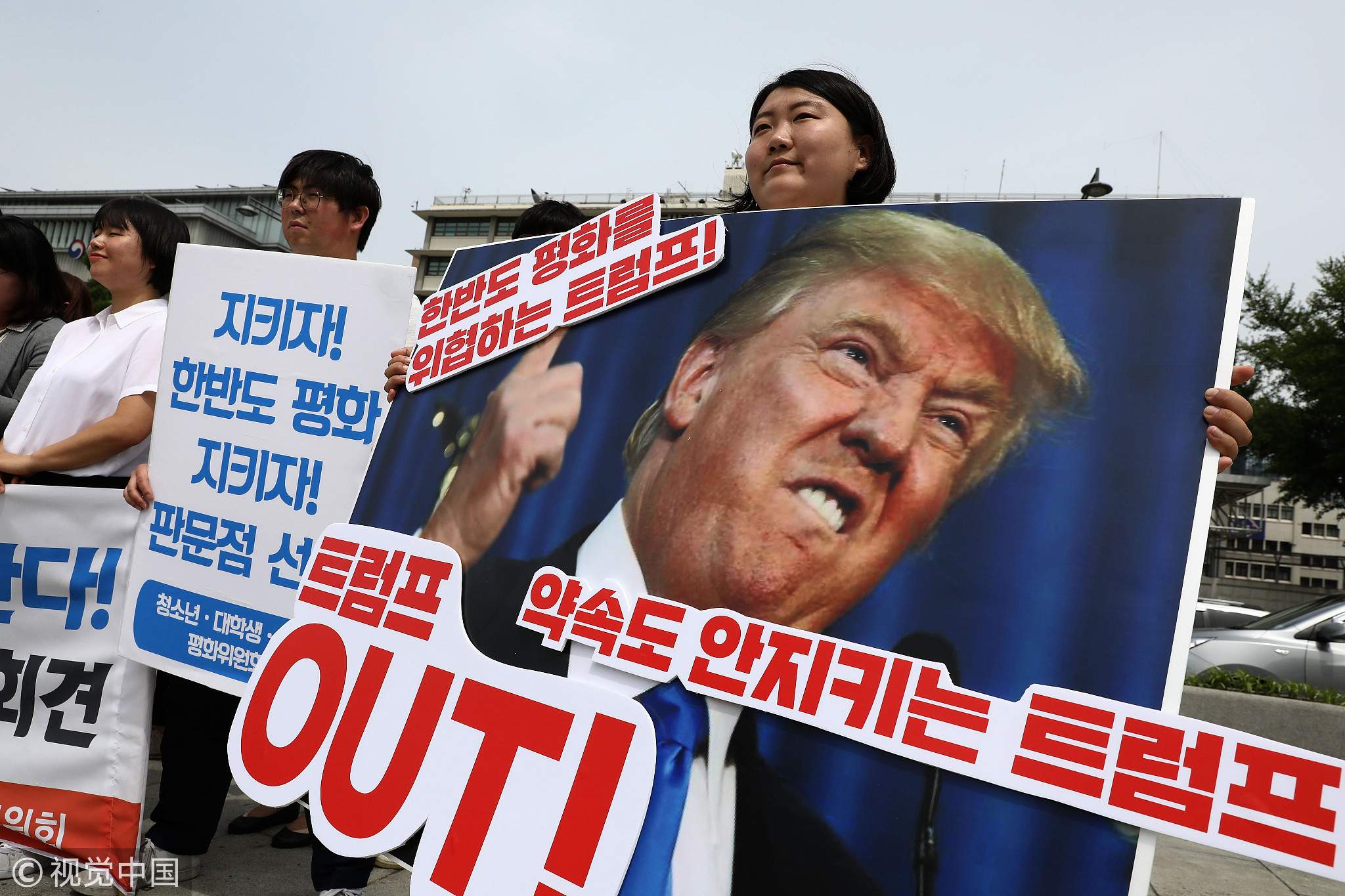 Activists gather in front of the US embassy to demand peace for the Korean peninsula after the cancellation of the US and DPRK summit on May 25, 2018 in Seoul, ROK. /VCG Photo.

Activists gather in front of the US embassy to demand peace for the Korean peninsula after the cancellation of the US and DPRK summit on May 25, 2018 in Seoul, ROK. /VCG Photo.

All in all, US diplomacy has steadily shifted towards unilateralism under the Trump’s administration.
Despite the stern remarks from the White House, it is fair to say that Trump’s letter is generally mild, and he did leave a window to all the possibilities as he said at the end of the letter that “If you [Kim] changes your mind having to do with this most important summit, please do not hesitate to call me or write."
It is also reported that politically, Trump has invested heavily in the success of the planned summit, and he enthusiastically embraced the idea of talks this June, the first-ever meeting between a US president and a leader of the DPRK.
Equally important, since Kim personally talked to President Xi in Dalian and said that there was no need to possess nuclear weapon as long as the DPRK was insured of its security and legitimacy. Due to this, the United States should be more responsible to approach the DPRK in accordance with the well-articulated tenets of negotiation, persuasion and compromises.
Hopefully, as Trump said that there was a very substantial chance to hold talks with Kim, even it might not work out for June 12. But there was a good chance that we’ll have the meeting.
(Wang Li is a professor at Jilin University of China. The article reflects the author's opinion, and not necessarily the views of CGTN.)
(Cover Photo: US President Donald Trump speaks to members of the media while meeting with Henry Kissinger, former US secretary of state (L) in the Oval Office of the White House in Washington, D.C. on May 10, 2017. /VCG Photo)