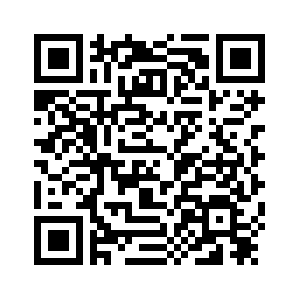 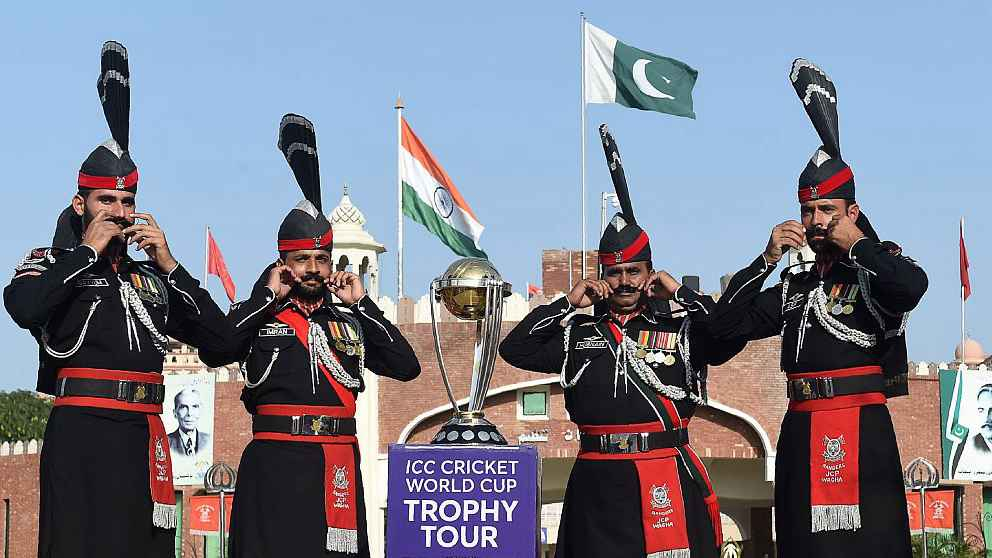 Even though the 100 days countdown was celebrated with much fanfare at London's landmark Trafalgar Square with the historic Nelson's Column being transformed into a giant set of wickets on Tuesday, the recent militant attack on Indian paramilitary forces in Kashmir has got some implications on the upcoming ICC Cricket World Cup, scheduled to be held in England and Wales from May 30 onwards. 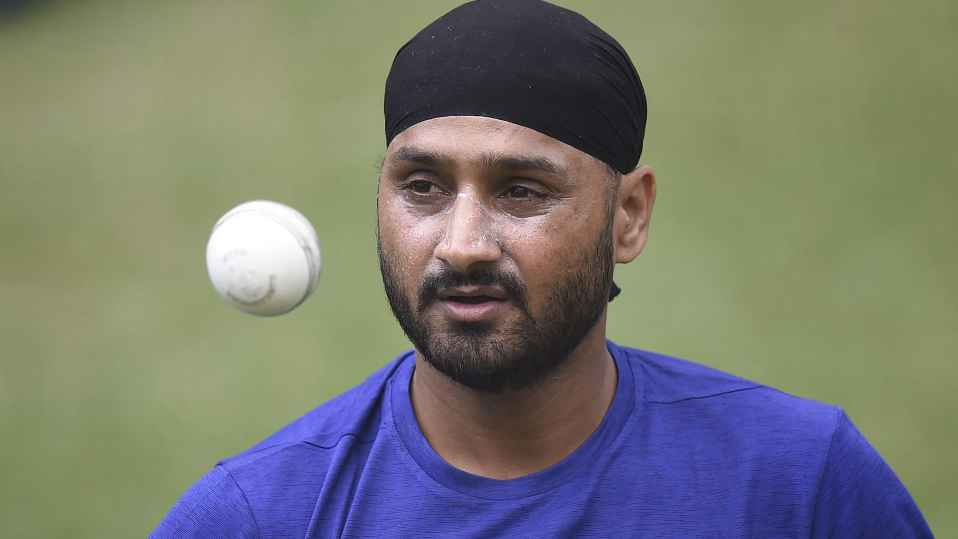 India's Harbhajan Singh takes part in a team training session ahead of the second Twenty20 cricket match between Australia and India in Melbourne, January 28, 2016. /VCG Photo

India's Harbhajan Singh takes part in a team training session ahead of the second Twenty20 cricket match between Australia and India in Melbourne, January 28, 2016. /VCG Photo

One of the key members of India's 2011 World Cup-winning side, Harbhajan Singh has raised a clarion call to boycott India's match against Pakistan in the quadrennial event. In an interview to leading Indian news channel Aaj Tak, Singh, popularly known as Bhajji, said: “I don't think India should play the World Cup match against Pakistan. Country comes first and we are all standing behind our country. Cricket or hockey or sports, it should be kept aside because this is a huge thing and repeatedly our soldiers are killed. We should stand with our country. Cricket or hockey or any sport, we don't need to play with them.”
Incidentally, India will take on Pakistan at Old Trafford in Manchester on June 16 in the 10-team tournament. The prolific off-spinner mentioned: “India should not play Pakistan in the World Cup. India are powerful enough to win the World Cup without having to play Pakistan.”
The marquee event will see each of the ten teams playing against the remaining nine teams in a league format before the top four teams progressing to the semifinals.
Thus, Singh felt India could afford to drop those crucial points by not playing the high-voltage match against their arch-rivals as the powerful side, led by Virat Kohli, has got the chance to earn enough points from the remaining eight matches in the league stage of the tournament.

Can India really afford to forfeit the match against Pakistan? 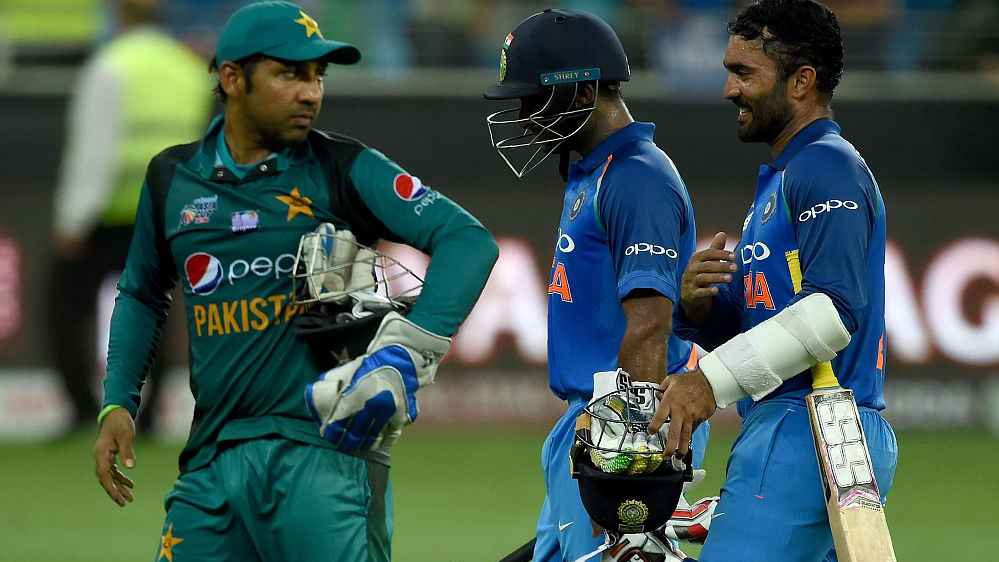 But if India decides to boycott the Pakistan game, according to the International Cricket Council (ICC) rules, they will not only forfeit points but also will face sanctions from the governing body of world cricket.
But there is also a valid question that has been asked by veteran Indian sports journalist and author Gulu Ezekiel. He quipped: “So what happens if we meet Pakistan in the semis or final? Hand them the title on a silver platter?”
With the top four teams from the league stage progressing to the semifinals, it's highly possible that the Men in Blue may face their neighbors either in the final four or in the grand finale. 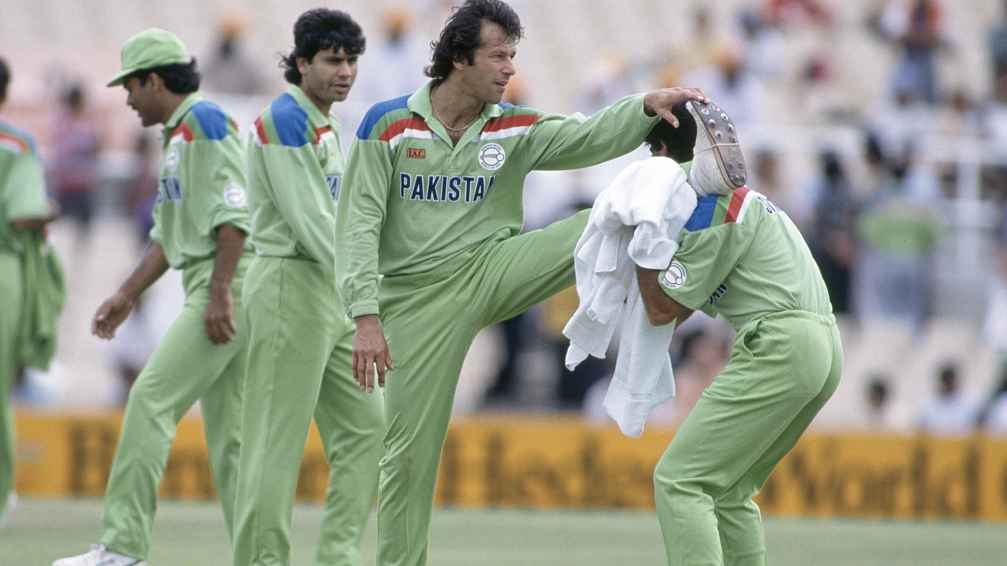 Pakistan captain Imran Khan gets some help stretching his hamstrings during the Benson and Hedges World Cup match between India and Pakistan at the Sydney Cricket Ground, March 4, 1992. /VCG Photo

Pakistan captain Imran Khan gets some help stretching his hamstrings during the Benson and Hedges World Cup match between India and Pakistan at the Sydney Cricket Ground, March 4, 1992. /VCG Photo

Interestingly, more than Singh's comments, cricket has come to the center stage in the whole issue as Pakistan's current Prime Minister Imran Khan himself is a former cricketer and the legendary all-rounder led his country to their first-ever World Cup victory in 1992.
The February 14 suicide attack, carried out by Pakistan-based Islamist militant group Jaish-e-Mohammad, killed more than 40 Indian paramilitary troopers.
One of Singh's teammates and India's 2011 World Cup-winning cricketers came down heavily on Pakistan immediately after the ghastly attack. Hero of the 2011 World Cup final Gautam Gambhir tweeted in anger: “Indian Army hasn't started this battle but they will bloody well finish it and I am with them emotion-to-emotion, shoulder-to-shoulder.”
However, the Pakistan Prime Minister, in a measured video message rubbished the allegations against his country, saying: “We are hearing the voices in India that say ‘Pakistan must be taught a lesson', ‘Revenge must be taken from Pakistan', ‘There should be a strike' ... First of all, what law gives any country to become judge, jury and executioner?” he asked. “What sort of [sense of] justice is this?”
“If you think that if you can carry out any kind of attack on Pakistan, Pakistan will not just think about retaliating, we will retaliate. There will be no way to respond other than to retaliate,” the fiery fast bowler of yesteryears warned his Indian counterparts.
Meanwhile, former Indian cricketer-turned-politician Navjot Singh Sidhu, a minister in India's Punjab state government, has come under fire from a section of Indian public and also from different political parties for attending Khan's swearing-in ceremony last year and his refusal to blame Pakistan for the recent attack. Siddhu, while condemning the Pulwama killings, categorically mentioned: “For a handful of people, can you blame the entire nation and can you blame an individual?” 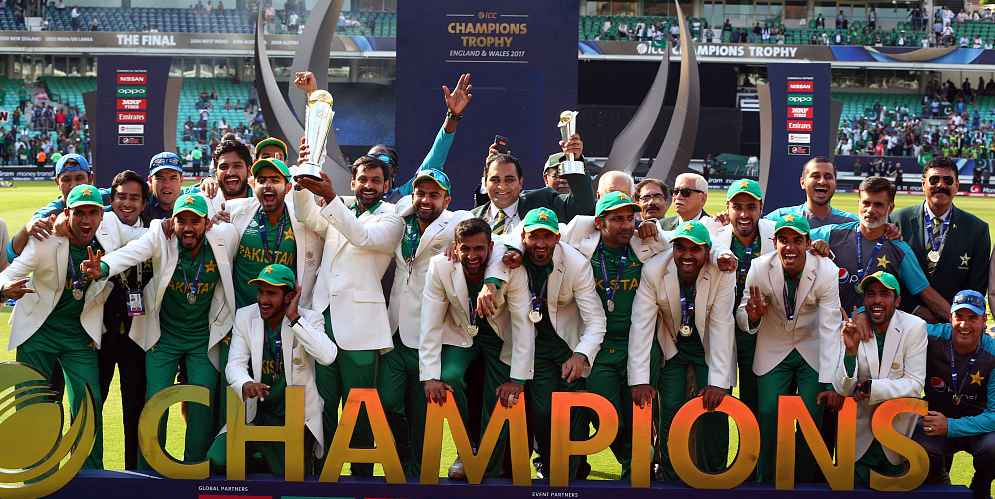 Pakistan cricketers celebrate with the Trophy after winning the ICC Champions Trophy Final match against India at The Oval in London, June 18, 2017. /VCG Photo

Pakistan cricketers celebrate with the Trophy after winning the ICC Champions Trophy Final match against India at The Oval in London, June 18, 2017. /VCG Photo

Close on the heels of the Indian government withdrew the MFN status for Pakistan following the attack, DSports, the Indian official broadcasters of the Pakistan Super League (PSL) – a popular Twenty20 cricket competition – decided to suspend their coverage while leading Indian broadcast production company, IMG Reliance, pulled out of their production service to the annual cricket jamboree in Pakistan.
“Unfortunately, denying India cricket fans the right to follow HBL PSL by blocking all digital coverage as well as covering or removing portrait of former Pakistan cricket captain and Prime Minister Imran Khan and other legendary cricketers from one of the most historic cricket clubs and venues are highly regrettable actions,” the Pakistan Cricket Board (PCB) strongly reacted to the withdrawals.

Will the sporting spectacle on June 16 take place? 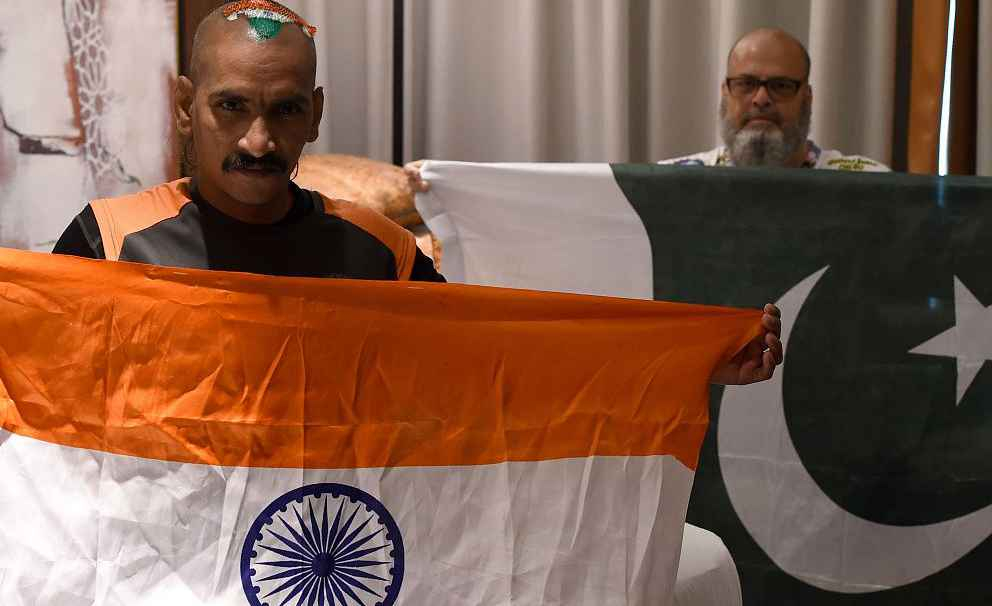 However, all eyes are on the blue riband World Cup and the showpiece match between the two Asian powerhouses and former champions of the most coveted cricketing event.
The Indian team, hot favorites to win the title, will be chasing their third World Cup title after victories in 1983 and 2011 while Pakistan will seek to repeat their title glory of 1992.
Incidentally, India have never lost a 50-over-a-side World Cup game against Pakistan till date and won each of their past six encounters. In fact, the match between the two countries in the last World Cup in 2015 attracted a global audience of more than one billion viewers and was the biggest match in the history of the World Cup till date. The two countries have never faced each other in a bilateral series since the 2012-13 series in India.
Apart from a large fan following and 400-million viewership of the tournament, the business and commercial values are massive when the two teams are involved in a cricket match.