I traveled to Qomolangma Base Camp – you can too!
By Tianran He 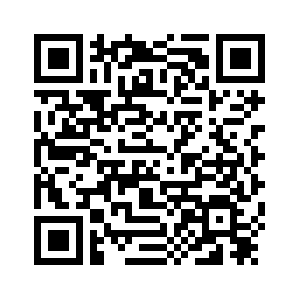 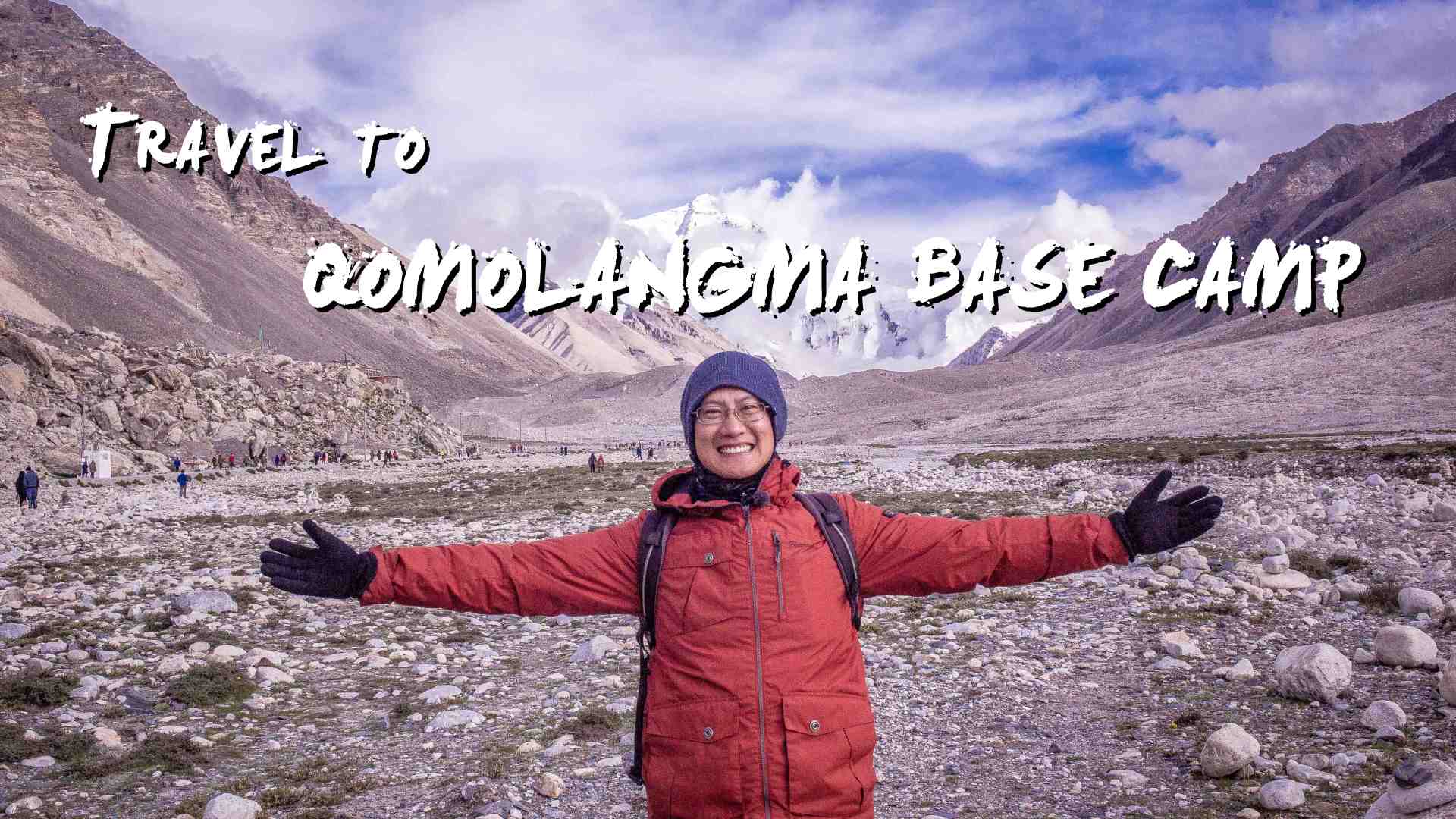 As a kid, I dreamed of climbing Mount Everest, "Qomolangma" in Tibetan. It sounded like the adventure of a lifetime, one that would make me really, really cool. I even attempted the ascent in my bedroom, strapping a luggage hook to my doorknob and pulling on it as if I were Sir Edmund Hillary or Tenzin Norgay. For my valiant efforts, I was nearly blinded when the hook came loose and ricocheted into my right eye. These days, more than 8,000 people have reached the top of the world's highest mountain since its first official ascent in 1953. And while normal folk like us will probably never climb Qomolangma, getting close to it has never been easier. 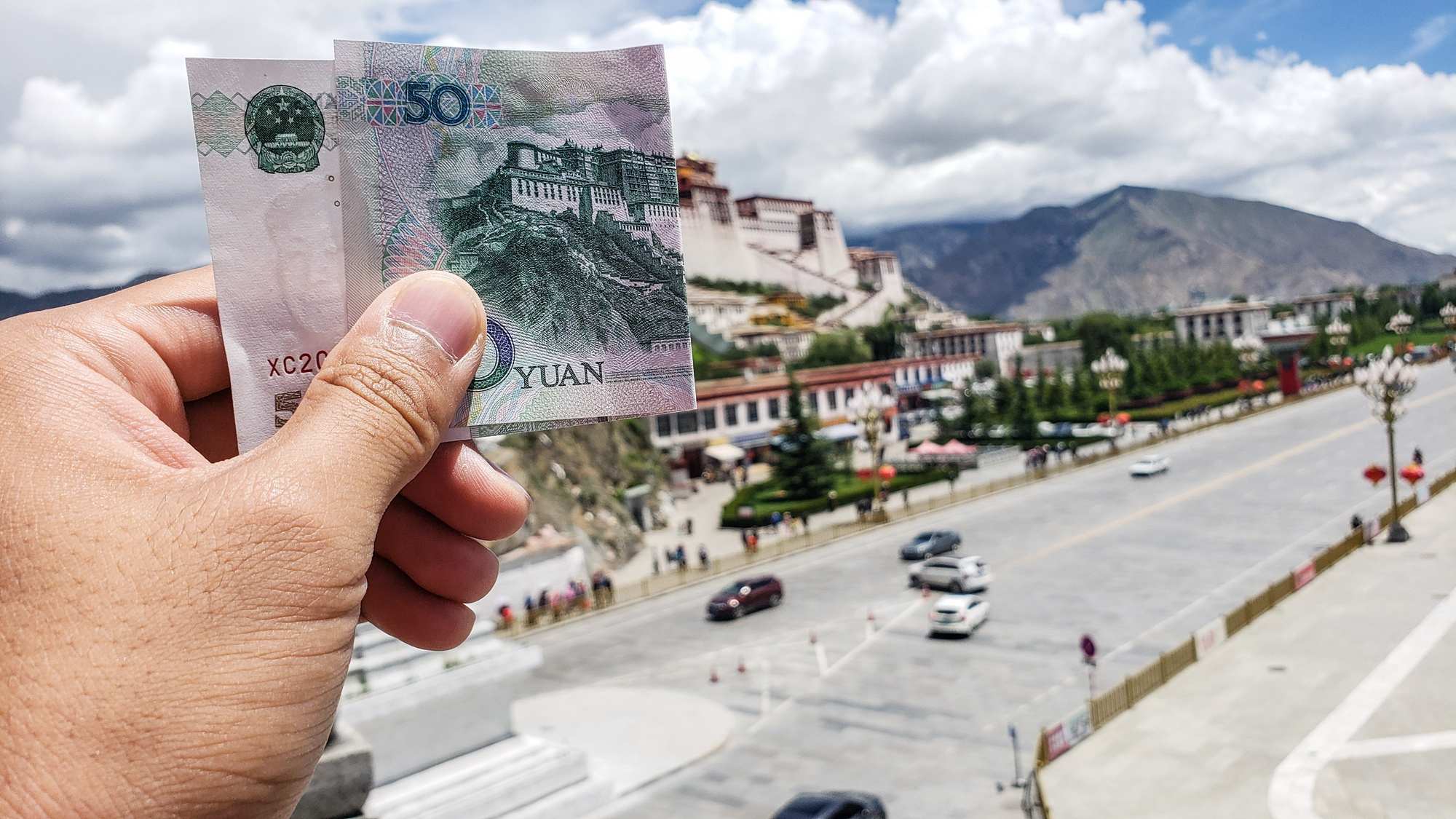 Lhasa's Potala Palace features on the back of the 50 Yuan note. /CGTN Photo

Lhasa's Potala Palace features on the back of the 50 Yuan note. /CGTN Photo

First stop: Lhasa, the capital of the Tibet Autonomous Region. Served by daily flights from Beijing, we spend a couple of days here visiting its famous sights and acclimatizing to the high altitude. Tibet isn't called the ‘Roof of the World' for nothing – the air up here is thinner and contains less oxygen, which causes altitude sickness. For the first few days I suffer from constant headaches and nausea, and my legs feel like lead weights. All this was thanks to Lhasa's elevation of over 3,600 meters above sea level (masl), which meant I was breathing in almost a third less oxygen than I would normally. To make matters worse, we'd need to travel 700km across the Tibetan Plateau and into the Himalayas to reach our final destination, Qomolangma Base Camp, which lies at a dizzying 5,200 masl. 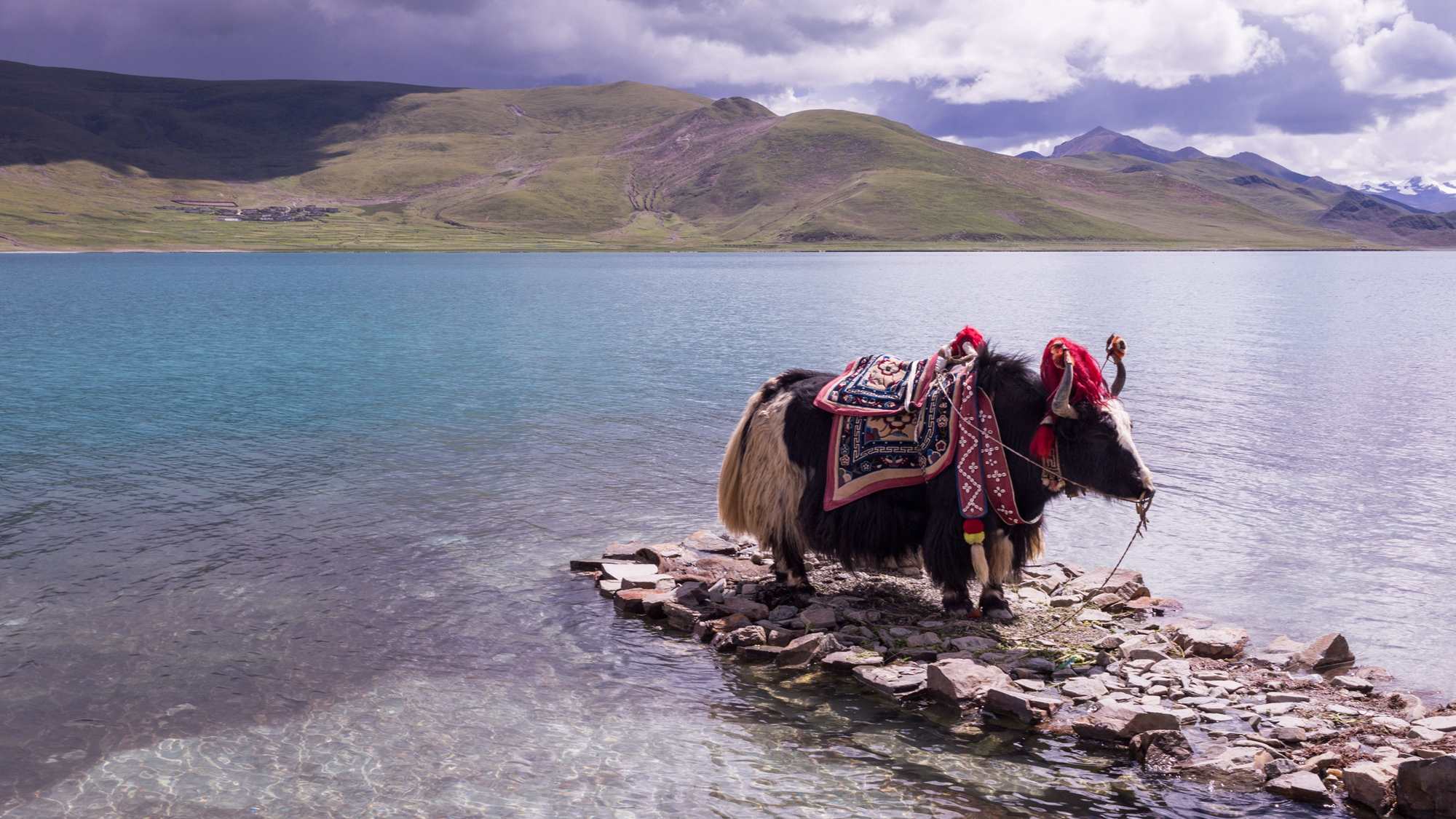 Along the way we pass by Yamdrok Lake, one of Tibet's three most sacred lakes. /CGTN Photo

Along the way we pass by Yamdrok Lake, one of Tibet's three most sacred lakes. /CGTN Photo

Gyantse is the first major town we reach after a half day's drive from Lhasa. Immediately my eyes are drawn to the giant fortress that looms above the town. Called a ‘dzong' in Tibetan, the fortress guarded ancient trade routes to India, Bhutan, and Nepal in one direction, and Lhasa and Shigatse in the other. It was Gyantse's military, political and religious nerve center. I felt powerful just by standing on top of its towering ramparts and looking out at the sweeping plains before me. If this was a view fit for a king, what would it feel like to look down from the top of Mt. Qomolangma? 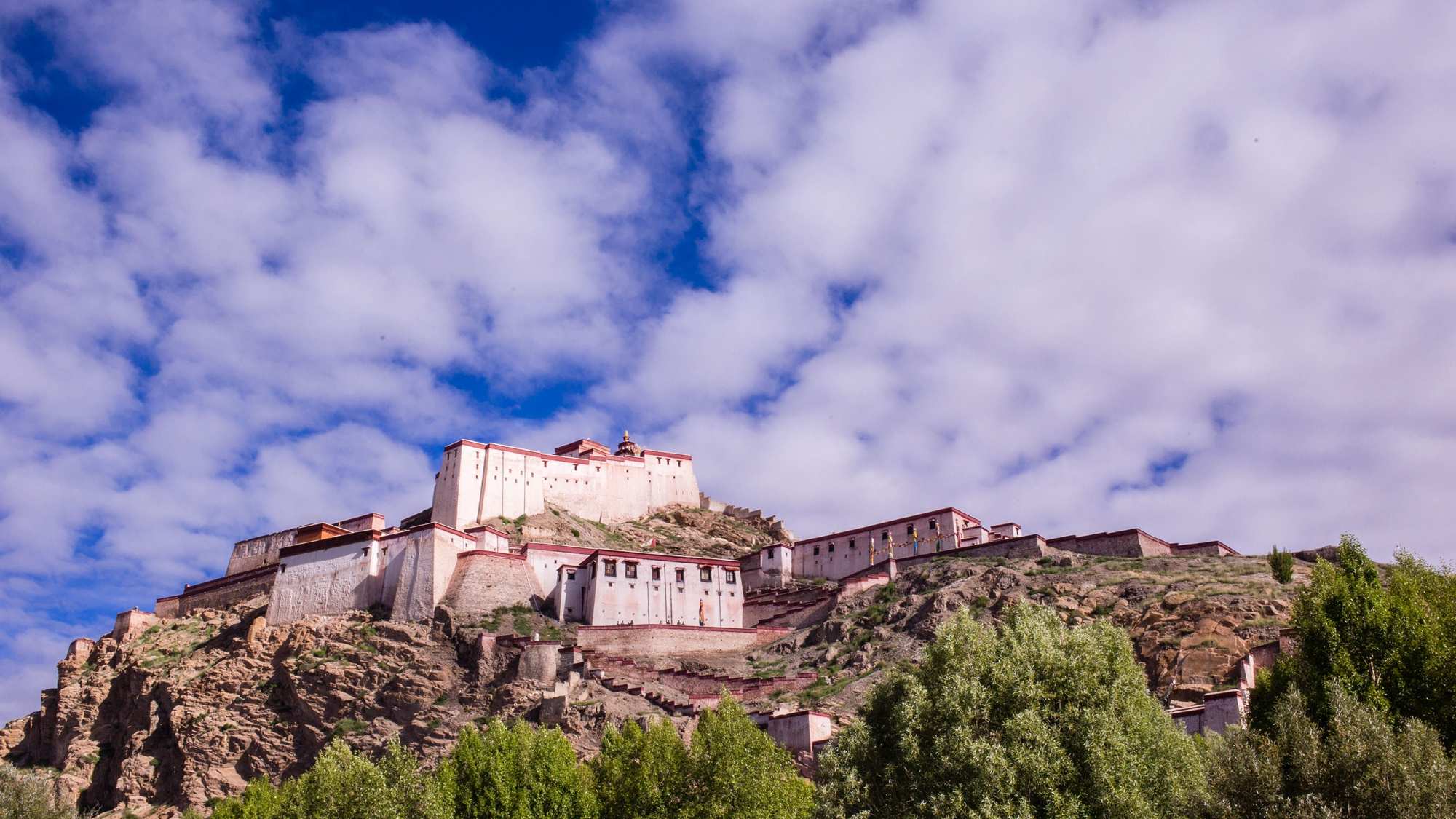 The next city we visit is also Tibet's second largest – Shigatse. Though it's sometimes called ‘The Gateway to Qomolangma', its biggest draw is definitely the Tashilunpo Monastery. Founded in the 15th century, it is the largest religious institution in Tibet and is home to over 800 monks. My guide Ba Sang tells me that, just like with college, applicants have to pass an entrance exam to get into the monastery. As we stroll through its mazelike alleys, we see several monks rushing past – they're late for debate class. The loudest place in the monastery complex, the debating courtyard, is packed with red-robed monks shouting and clapping at each other; some look like they're on the verge of fisticuffs. I mention this to Ba Sang and he chuckles, "Yes, they do get quite lively." 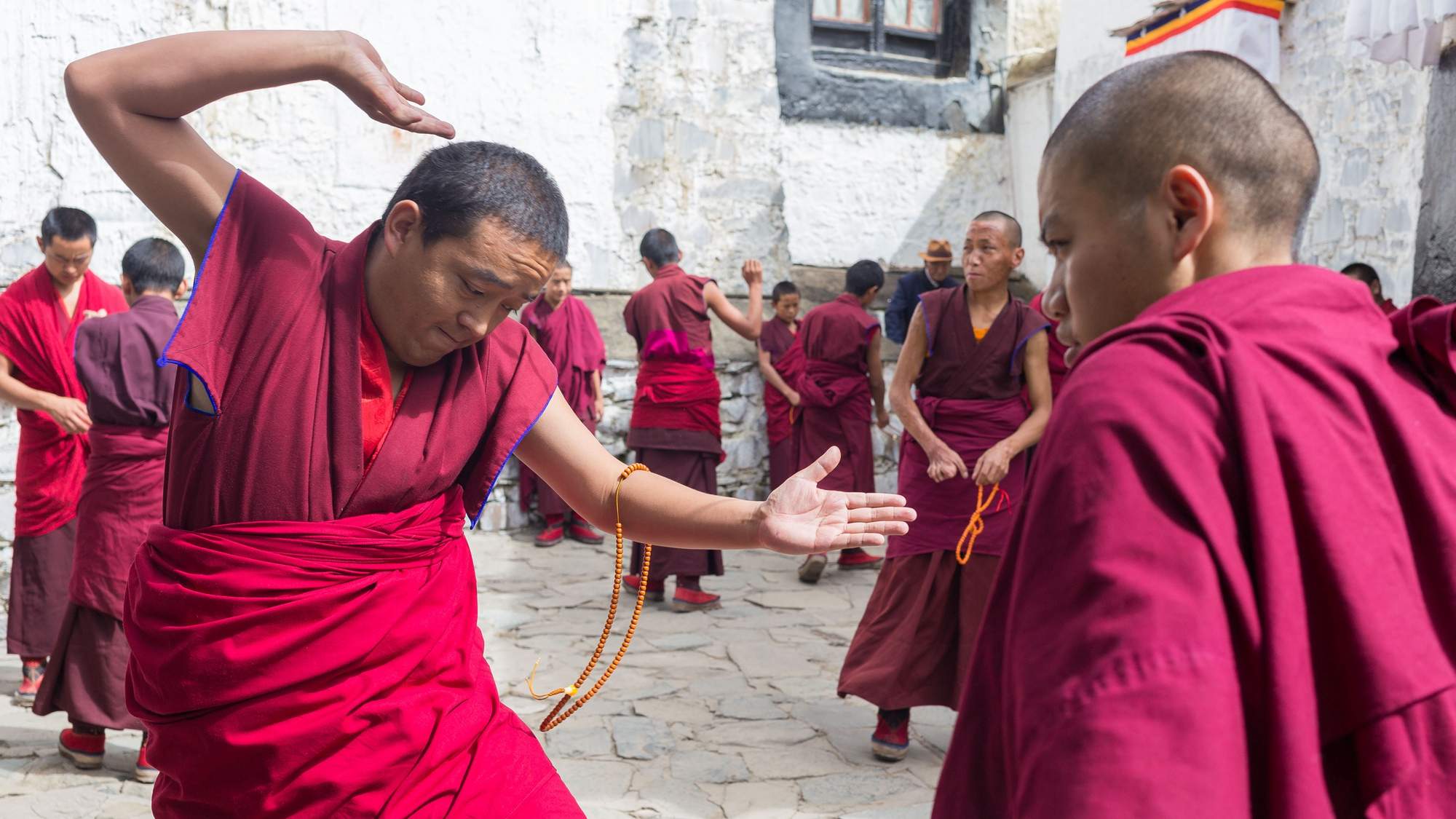 Monks debate each other on Buddhist doctrines. /CGTN Photo

Monks debate each other on Buddhist doctrines. /CGTN Photo

The day we arrive at Qomolangma Base Camp is one filled with both relief and frustration. Qomolangma in Tibetan means ‘Holy Mother'. Only, she's nowhere to be found – it's been raining all day and the clouds have swallowed up the world's highest mountain. We decide to wait it out in base camp. During climbing season there is another camp just for the climbers, but right now there's just the one, and it's comprised of a couple of rows of black tents and a China Post office. As the sun begins to set on our adventure, we make a spur-of-the-moment decision to stay overnight. The tents here are furnished with basic amenities: A stove, a temperamental electricity generator, and WiFi that does not work as advertised. Our bed is a raised platform similar to the kangs of northern China. The six of us go to sleep side-by-side, tightly wrapped in our duvets like cocoons. 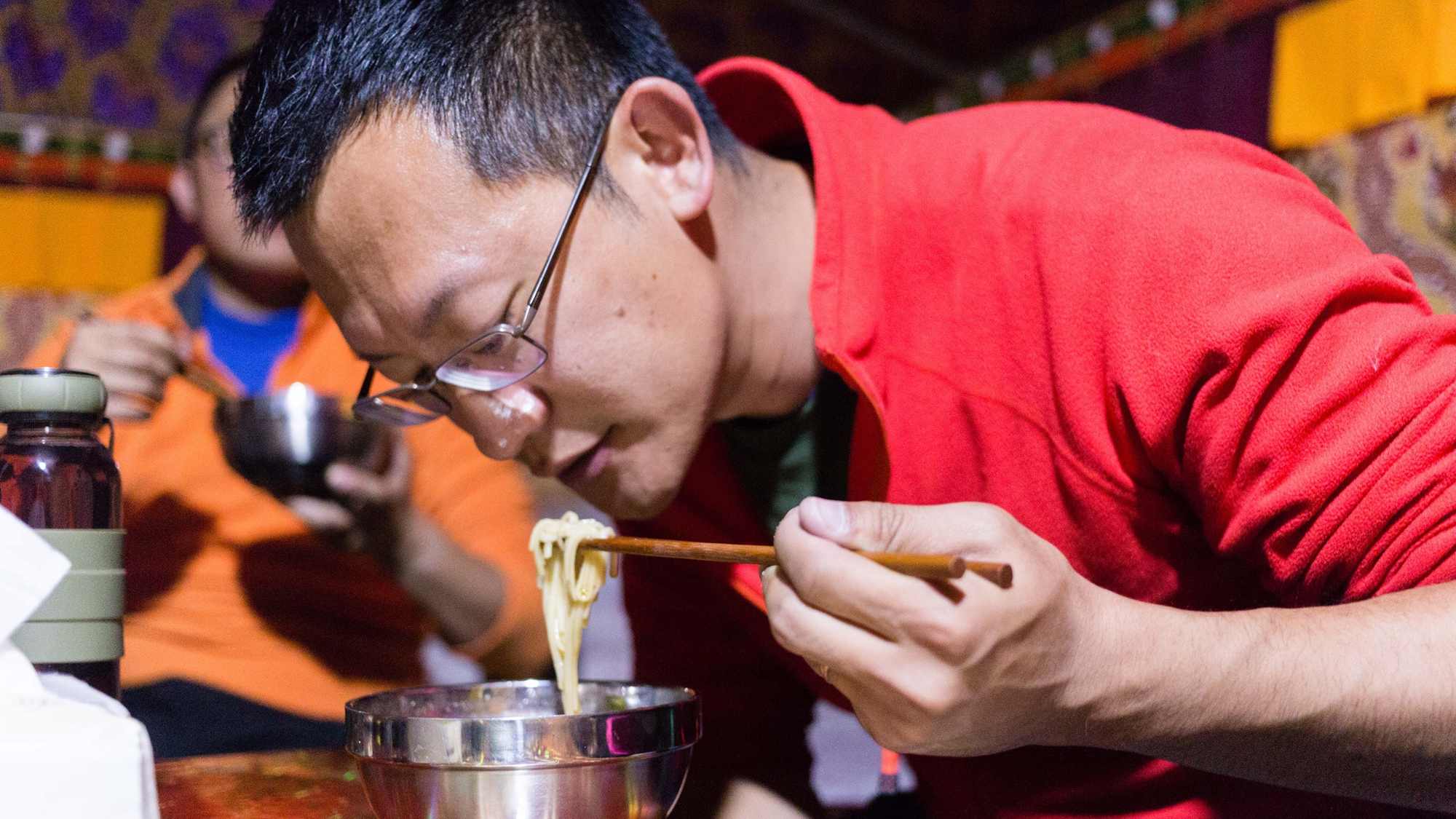 The following morning, I exit my tent to be greeted with thick grey fog. Forget Qomolangma, we can't even see the mountains around us. We walk a little further in to Rongbuk Monastery – one of the world's highest monasteries and something of a pilgrimage site for Qomolangma expeditions. It's manned by just one monk, Awang Sangjie, whose son has climbed Qomolangma 10 times. He shows me a photo of his son posing on the summit; he looks really, really cool. People come to pray at Rongbuk Monastery not just because of its proximity to Mt. Qomolangma, but also because the legendary Master Padmasambhava, widely considered a “Second Buddha” by Tibetan Buddhists, was thought to have meditated in a cave beneath the monastery. 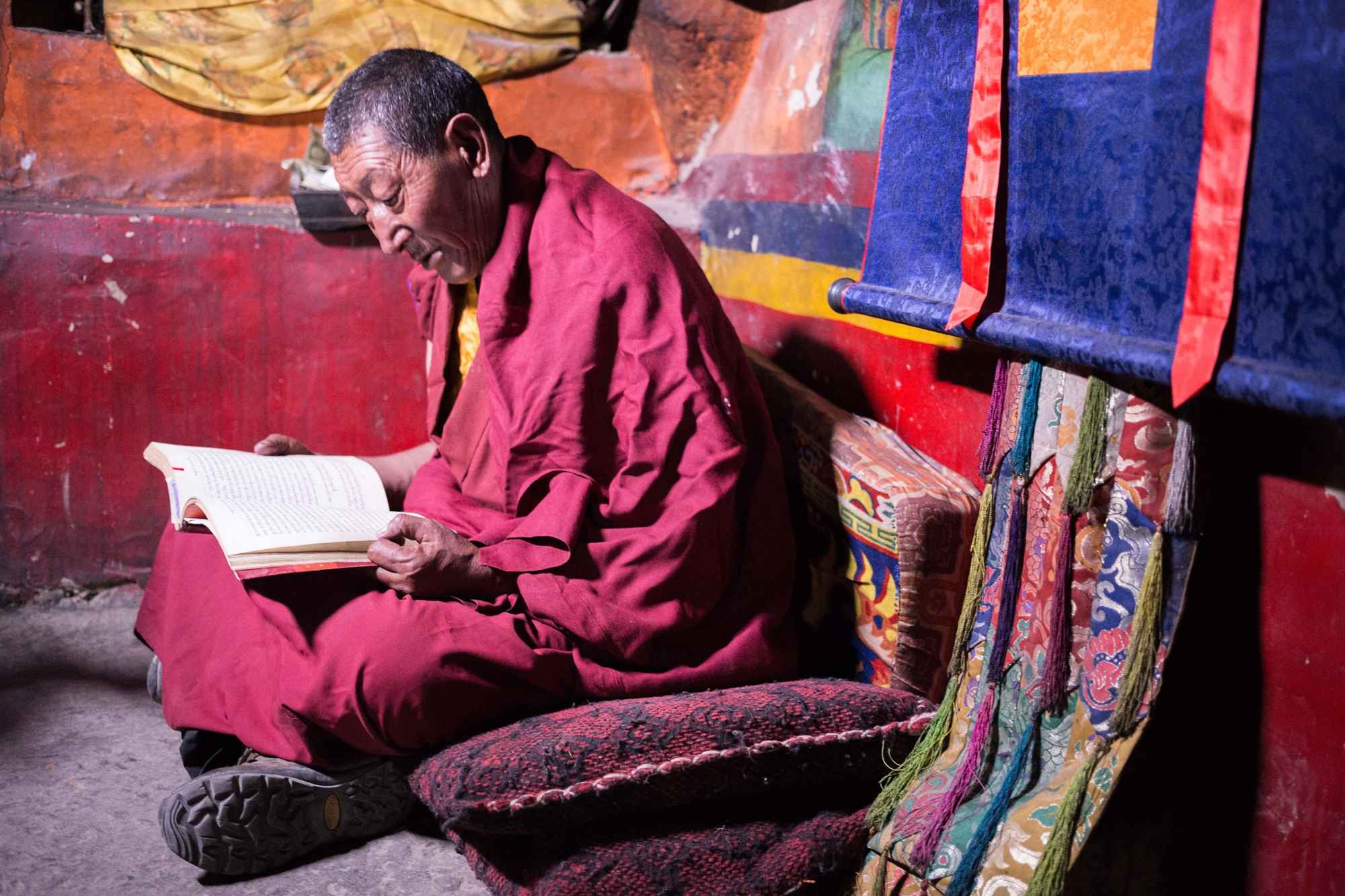 As we make our way back to camp, the sky begins to clear. A window briefly opens in the clouds and just like that, Qomolangma casually appears. The people around us shout in excitement as they hurriedly whip out their phones and cameras to photograph the ‘Holy Mother'. She's immense, her wide, snow-clad form dominating the horizon. I've seen many snow-capped mountains and they all give off a different vibe: Some inspire awe, others inspire dread. Mt. Qomolangma exudes a sense of stability. And as I gaze upon its massive flank, I come to the realization that even after all life has disappeared from Earth, this mountain will remain. It will endure until the end of time. 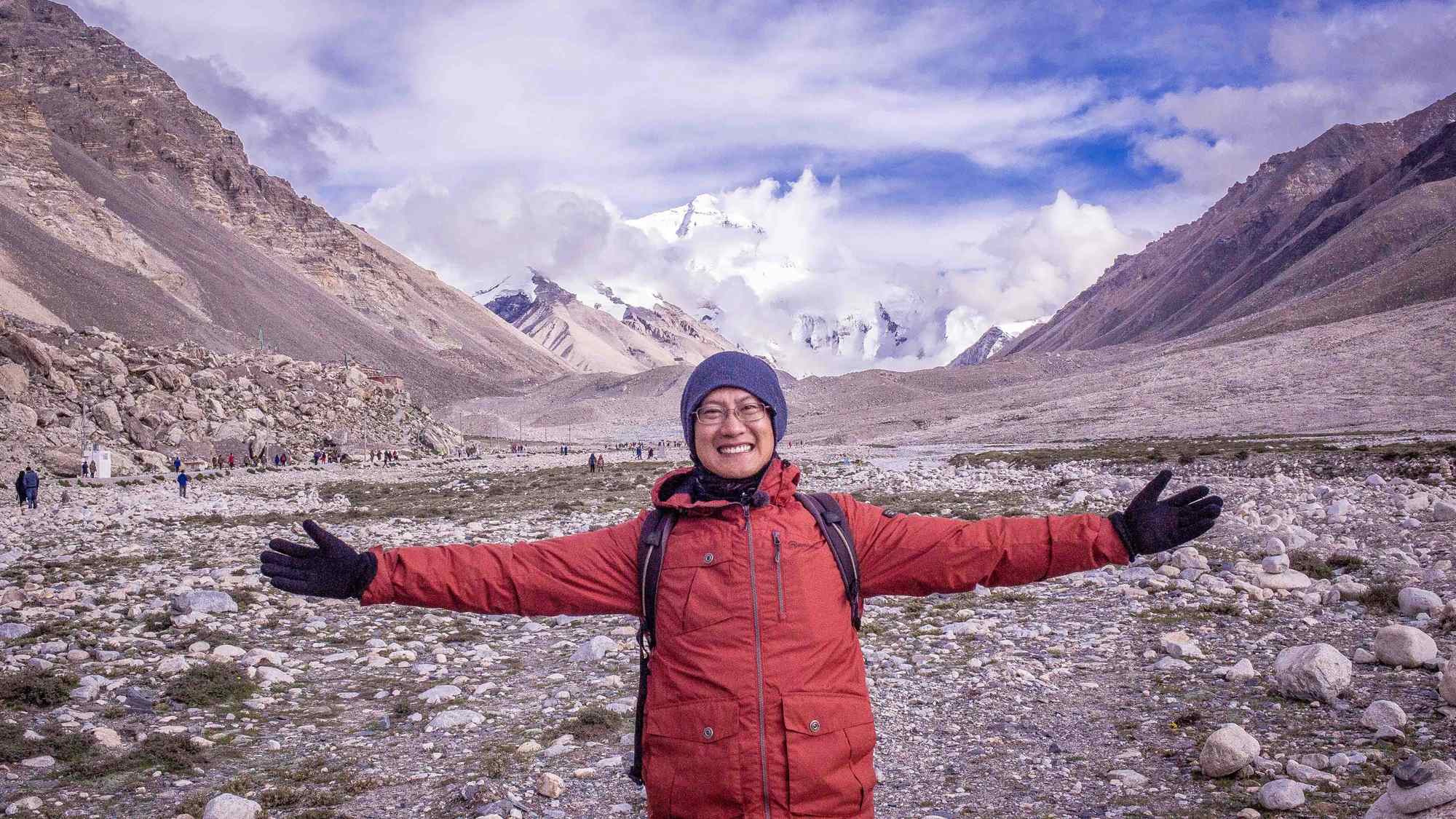