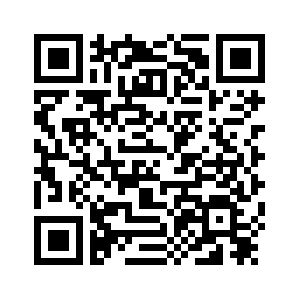 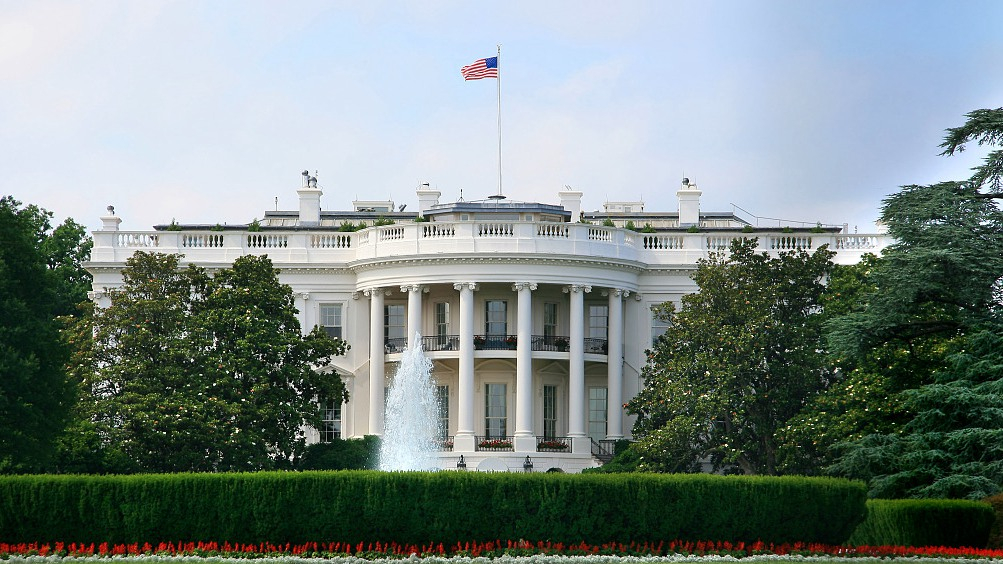 Editor's note: Li Zheng is an associate research fellow at the China Institutes of Contemporary International Relations, Institute of American Studies and director of the American Security Center, Institute of American Studies. The article reflects the author's opinion, and not necessarily the views of CGTN.
On February 5, U.S. President Donald Trump delivered his second State of the Union speech on Capitol Hill.
This is the first time in history that the State of the Union address has been postponed due to the government shutdown. This reflects the new political ecology and power structure of Washington after the 2018 midterm elections.
In his speech, Trump reiterated his campaign commitments such as repairing walls and protecting employment opportunities in the United States. He hoped that the two parties in Congress would cooperate.
However, from the reaction of the Democratic Party, Trump is likely to fall into an endless battle with the Democratic Congress in the next two years. 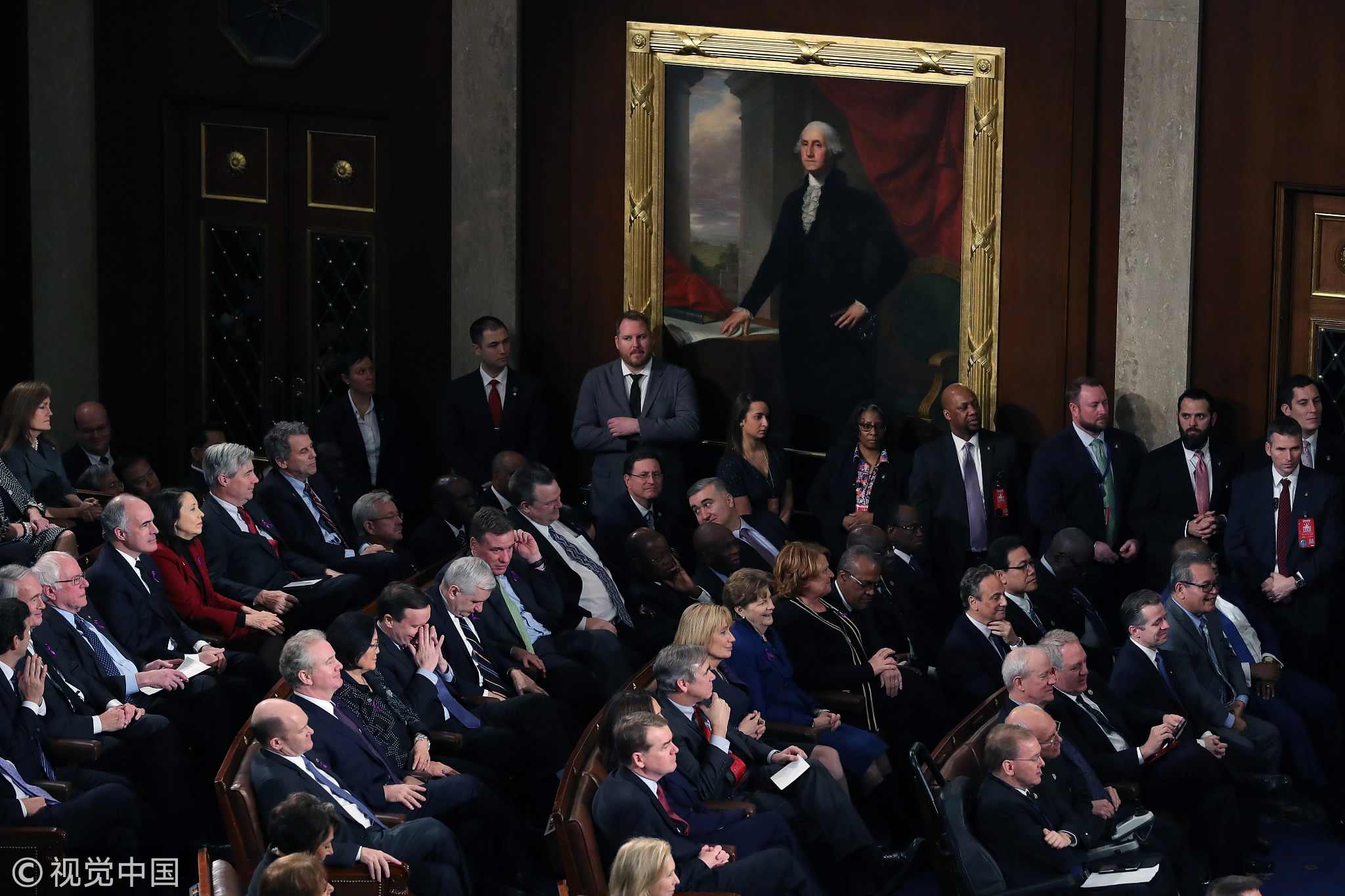 Attendees watch as President Donald Trump delivers the State of the Union address in the chamber of the U.S. House of Representatives, January 30. /VCG Photo

Attendees watch as President Donald Trump delivers the State of the Union address in the chamber of the U.S. House of Representatives, January 30. /VCG Photo

Traditionally, the State of the Union address is the President's briefing to Congress on the policy priorities for the coming year and a platform to show the unity of the U.S. government and Congress.
However, with the political polarization in recent years, the party political tendency of the State of the Union address has become apparent and is no longer a united, peaceful and inclusive speech.
Because Trump insisted that Congress support the construction of the border wall, the U.S. just ended the longest government closure crisis in history. Trump said that the two parties could bridge the old differences and establish new alliances, which may be just a good wish of Trump.
As the leader of the Democratic Party, House Speaker Pelosi did not follow the traditional introduction of Trump, refused to stand up and applauded, and issued more than 10 tweets in the speech process to refute Trump's achievements. Is this what Trump called “unity”?
In diplomacy, this State of the Union address has three major concerns:
Firstly, Trump regards illegal immigrants from the southern border as the largest national security threat in the U.S., even surpassing terrorism. 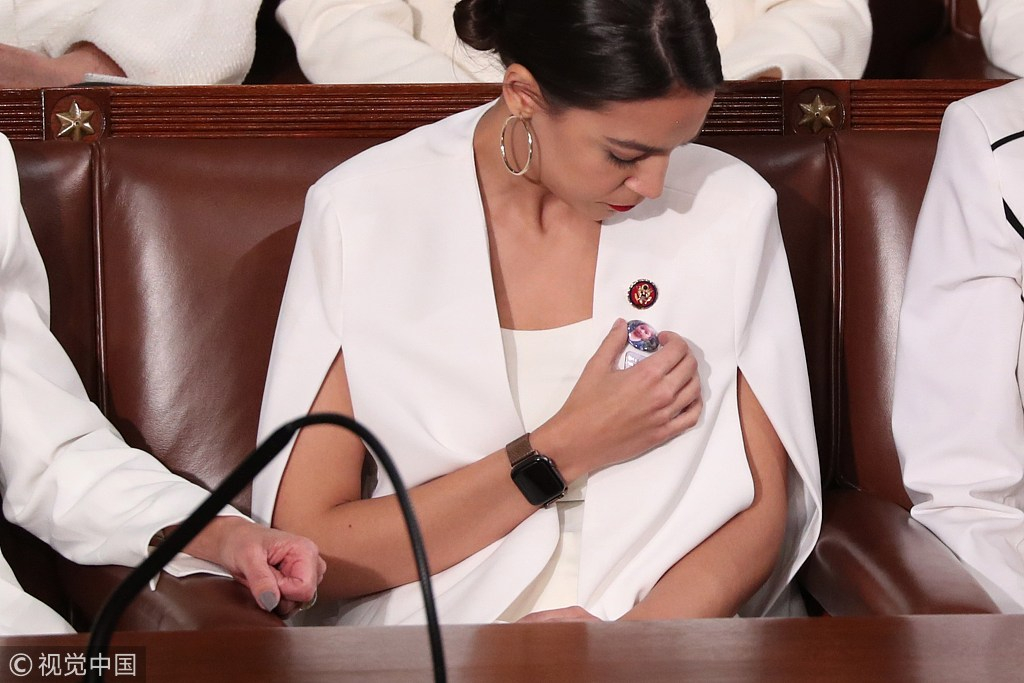 Trump said that countless Americans were brutally killed by illegal immigrants, died of deadly drugs from the border, and brought serious sexual crimes and human trafficking. Trump believes that only building a border wall can solve this problem.
Trump's persistence in building the border wall puzzled the Democratic Party and the international media. The border wall may not play a big role in limiting illegal immigration, but it will become an irreversible political legacy of Trump.
The wall, like the Statue of Liberty, will become a landmark of U.S., announcing to the world that the U.S. is no longer unconditionally open to the world.
Secondly, Trump continues to attempt to revise the U.S. international trade policy.
In his speech, Trump asked Congress to pass the United States-Mexico-Canada Agreement (USMCA) as soon as possible, which would replace the North American Free Trade Agreement and become the beginning of a comprehensive revision of bilateral, multilateral trade agreements and adjustments to foreign trade relations.
The international community will pay close attention to the review process of the USMCA in Congress, especially whether the Democratic Party will block the agreement, and whether the Trump administration will make new demands after the agreement comes into effect. 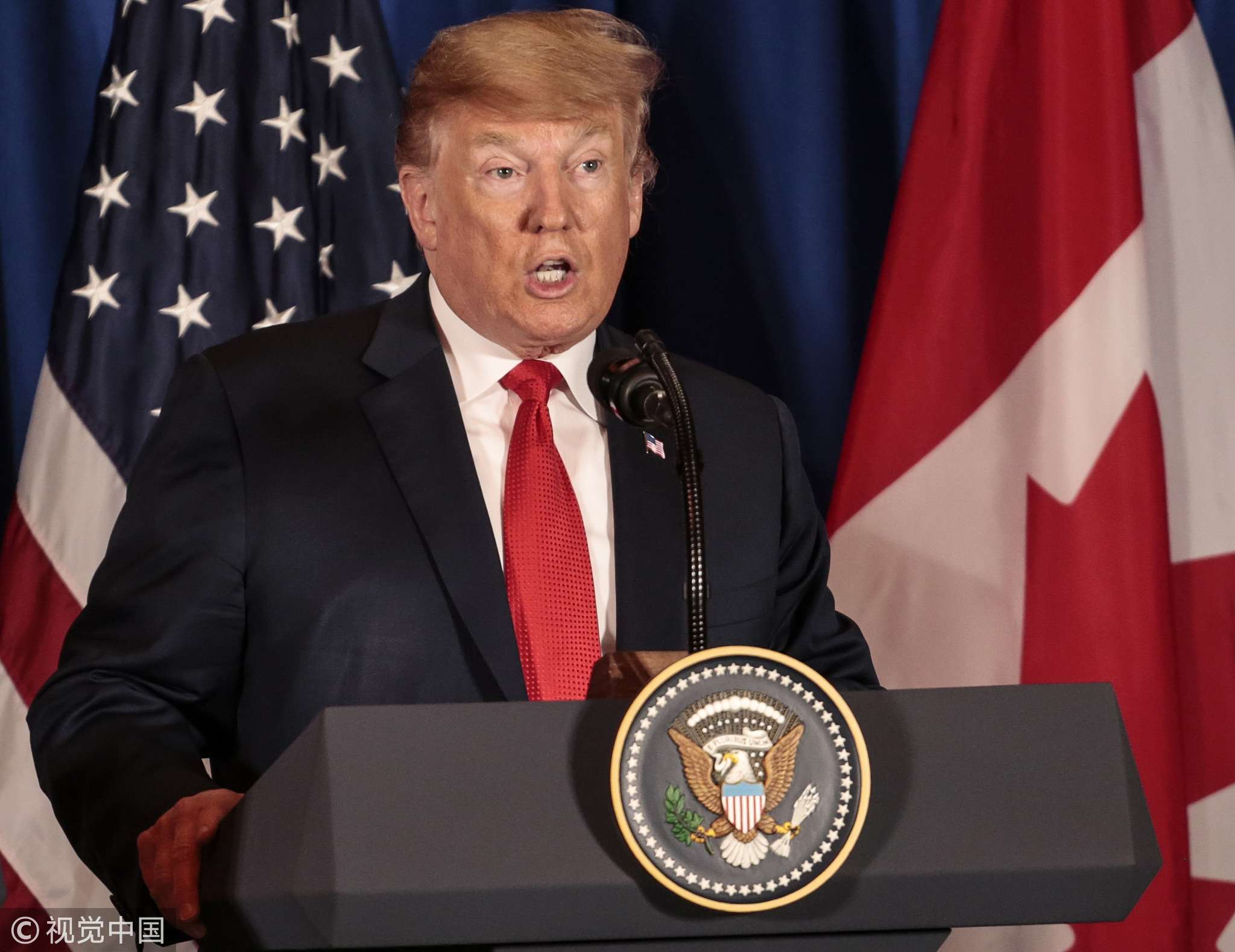 U.S. President Donald Trump speaks at a news conference ahead of the signing of the U.S.-Mexico-Canada Agreement (USMCA) at the G20 Leaders' Summit in Buenos Aires, November 30, 2018. /VCG Photo

U.S. President Donald Trump speaks at a news conference ahead of the signing of the U.S.-Mexico-Canada Agreement (USMCA) at the G20 Leaders' Summit in Buenos Aires, November 30, 2018. /VCG Photo

Before these uncertainties are eliminated, the global economy will still be affected by the protectionist trade haze.
Adjusting China-U.S. economic and trade relations is also an essential part of this “grand” adjustment. Trump stressed that the U.S. government's tariff on China is spurring U.S. manufacturing, but he ignores the fact that trade friction is causing the decline of U.S. companies' sales in China.
In the speech, Trump did not issue a new warning of trade protectionism, and he may have discovered that this policy has brought huge side effects to the U.S. economy.
Thirdly, the stick hits Venezuela, and the carrots are given to others.
Trump reiterated his support for the Venezuelan opposition leaders and believed that socialism was the main reason for Venezuela's current economic crisis. 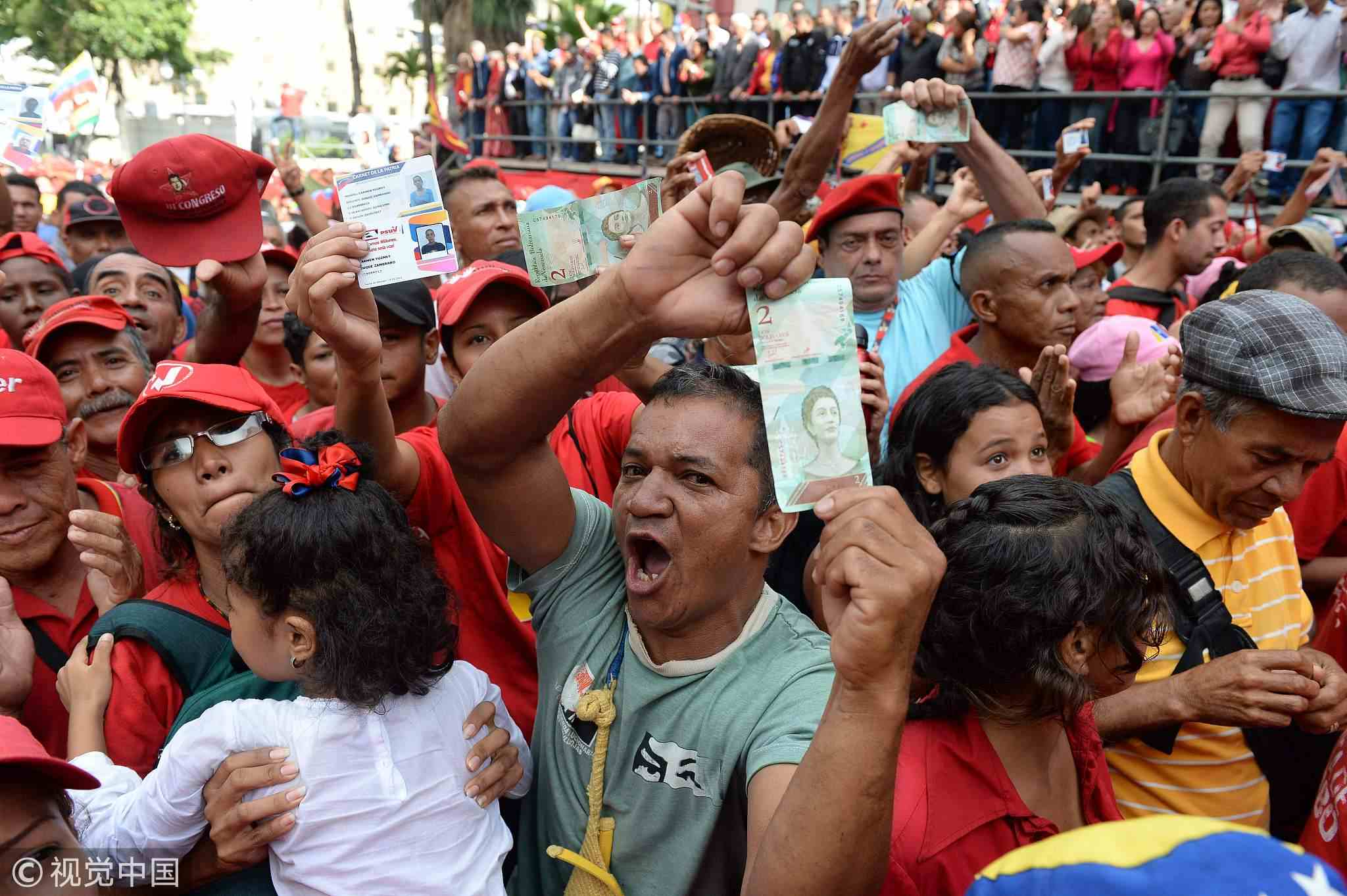 A rally in support of the economic measures taken by Venezuelan President Nicolas Maduro in Caracas, August 21, 2018. /VCG Photo

A rally in support of the economic measures taken by Venezuelan President Nicolas Maduro in Caracas, August 21, 2018. /VCG Photo

This accusation implies political intent, and Trump hopes to mislead the American public's perception of socialism and weaken the support of the Democratic Party's left-wing socialist policy.
In fact, some American media do not agree with Trump's judgment that the crisis in Venezuela is more blamed on the country's single industrial structure and huge debts accumulated. Socialism may work well in the U.S.
At the same time, Trump threw carrots at traditional American opponents such as the DPRK and the Taliban. Trump announced the exact date of the second meeting with DPRK leader Kim Jong Un and revealed that the U.S. is in talks with the Taliban.
Trump knows that the U.S. no longer has enough resources to deal with multiple opponents at the same time, promoting the American democratic system globally, so it has adopted a pragmatic and selective way. However, this also means that the carrots are also likely to be a short-term expedient.
Once the U.S. has achieved a change of government, Trump's big stick may be transferred to other objects.
Overall, Trump's second State of the Union address has been more moderate than the first year, and no new major goals have been proposed.
This shows that the Trump administration is facing a difficult situation. On the one hand, the benefits of tax cuts are waning, and if Trump does not introduce new stimulus policies, the economic environment that Trump faces will become more severe.
On the other hand, Trump's trade protection economic policy and populist social policy bring increasing side-effects and meet with more intense opposition from the Democratic Party.
In the next two years, it is hard for Trump to change the situation.
(If you want to contribute and have specific expertise, please contact us at opinions@cgtn.com.)