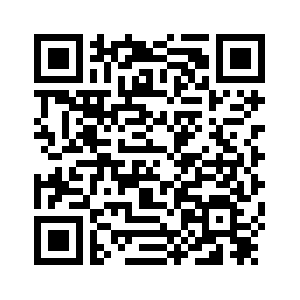 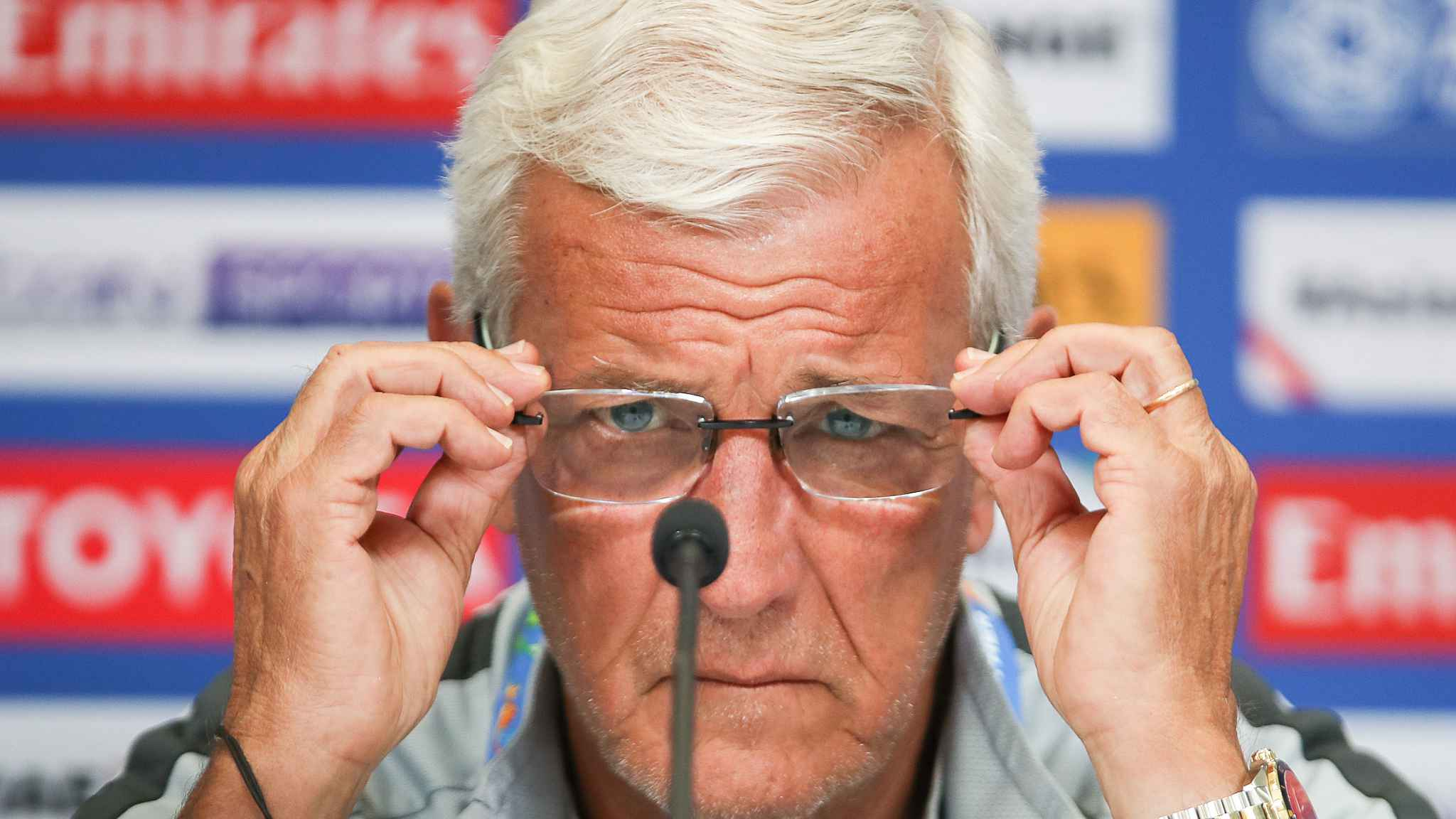 Chinese Super League leading marksman Wu Lei will be available for China's second group game as Marcello Lippi's side look to build on the triumph against Kyrgyzstan and close in on the Asian Cup knockout phase.
Exhibiting the strength of character at the end of a feisty encounter that had started disastrously, China came from behind to scrape a 2-1 win in Monday's Group C opener.
It was their fourth straight victory in its Asian Cup opening game and puts them in a strong position to reach the knockout stage heading into Friday's fixture against the Philippines in Al Ain, United Arab Emirates.
China is set to receive a further fillip with star striker Wu, who has been linked with Premier League outfit Wolves, returning to full training with the team following a collarbone injury. 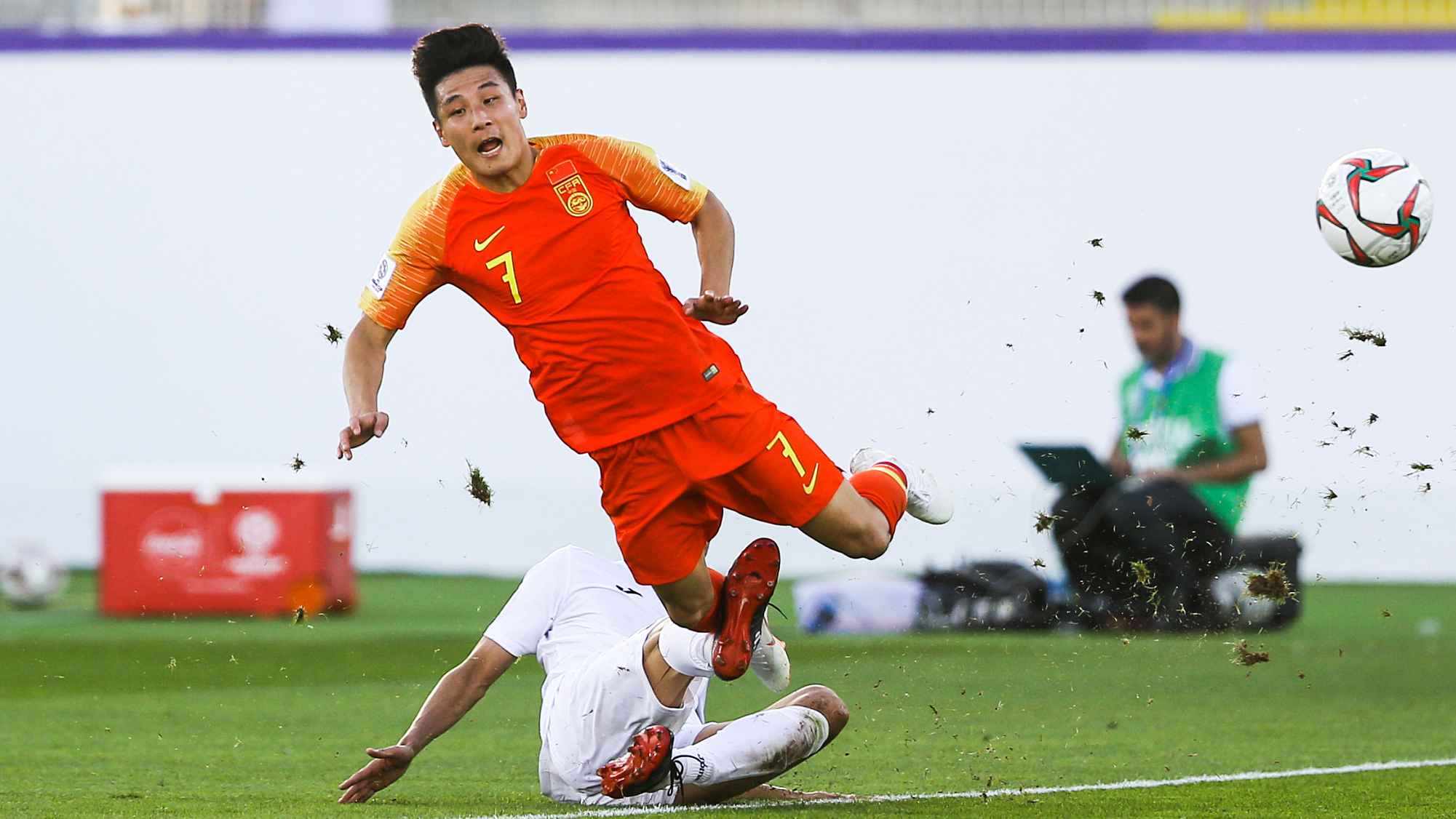 China's Wu Lei was tackled from behind during their Asian Cup opener against Kyrgyzstan on January 7. /VCG Photo

China's Wu Lei was tackled from behind during their Asian Cup opener against Kyrgyzstan on January 7. /VCG Photo

"We currently have three players dealing with injuries. Xiao Zhi and Wei Shihao won't be available for our second game. But Wu Lei will be ready to play," said Lippi.
The veteran Italian also demanded that there be no repeats of the floppy goals his side conceded against Iraq, Jordan and Kyrgyzstan when Team Dragon take on the Azkals, insisting on focus and concentration from the very start.
"The priority for us is to strike a balance between defense and attack. We cannot repeat the mistakes we made during the first half of our last game. We have to be more focused than ever and avoid unforced errors."
Lippi words were then echoed with mechanical precision by his captain Zheng Zhi, who will return to the starting lineup after serving a one-game suspension. 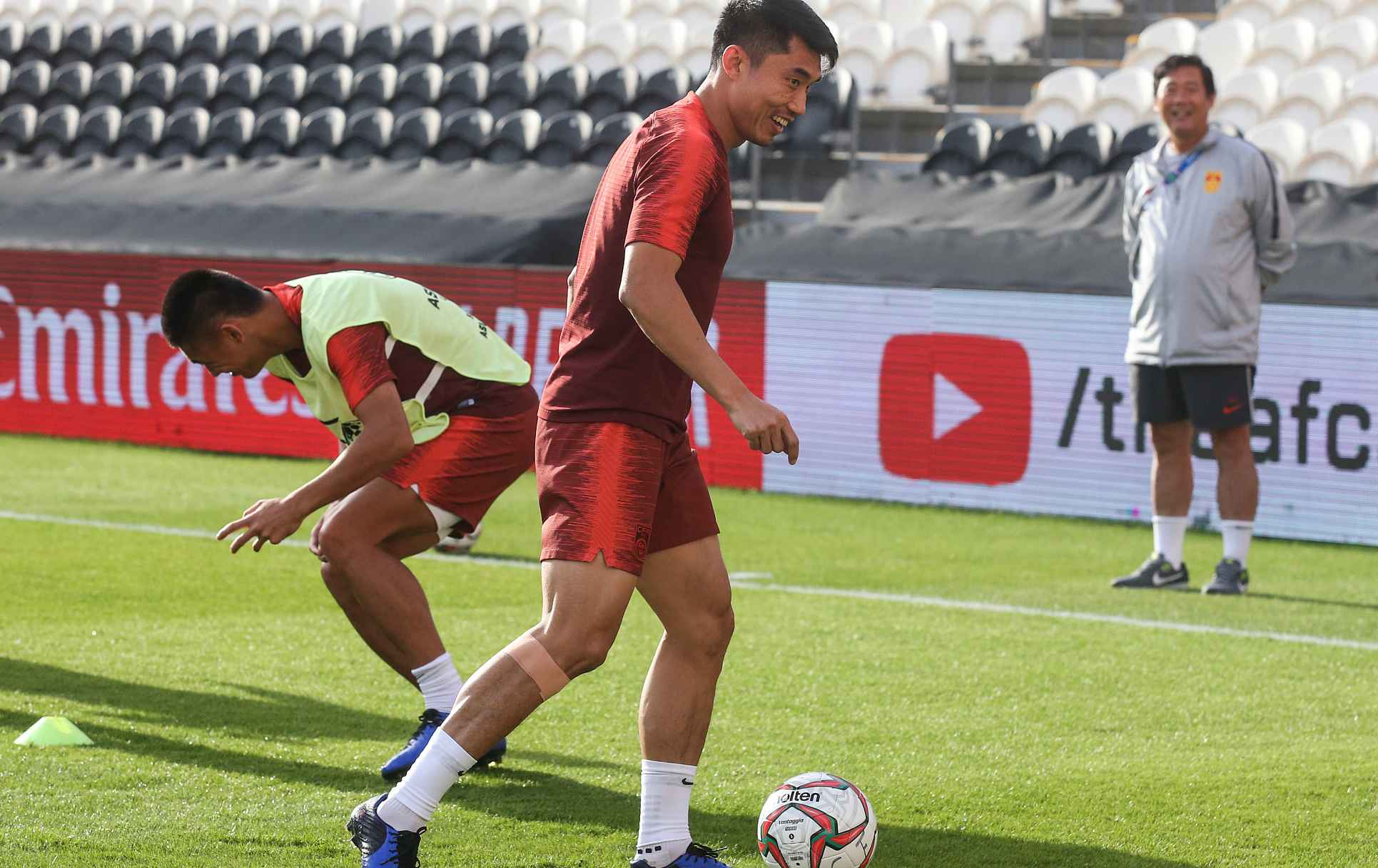 "The team had a slow start in the opening game, and we were pinned down by our opponents before the break. After some tactical switches by the coach, we gradually regained our poise and recovered," Zheng mused.
"We cannot let this happen again. Our team has to be concentrated and play with high intensity from the very first minute. Everyone should be physically and mentally prepared from the get-go."
"All of us are looking forward to this game. After picking up three points against Kyrgyzstan, we are hoping to build on that momentum and progress [from Group C] by clinching another victory."
However, the face-off with the Philippines is expected to be a tense affair, insisted Lippi, who won the World Cup with Italy in 2006. 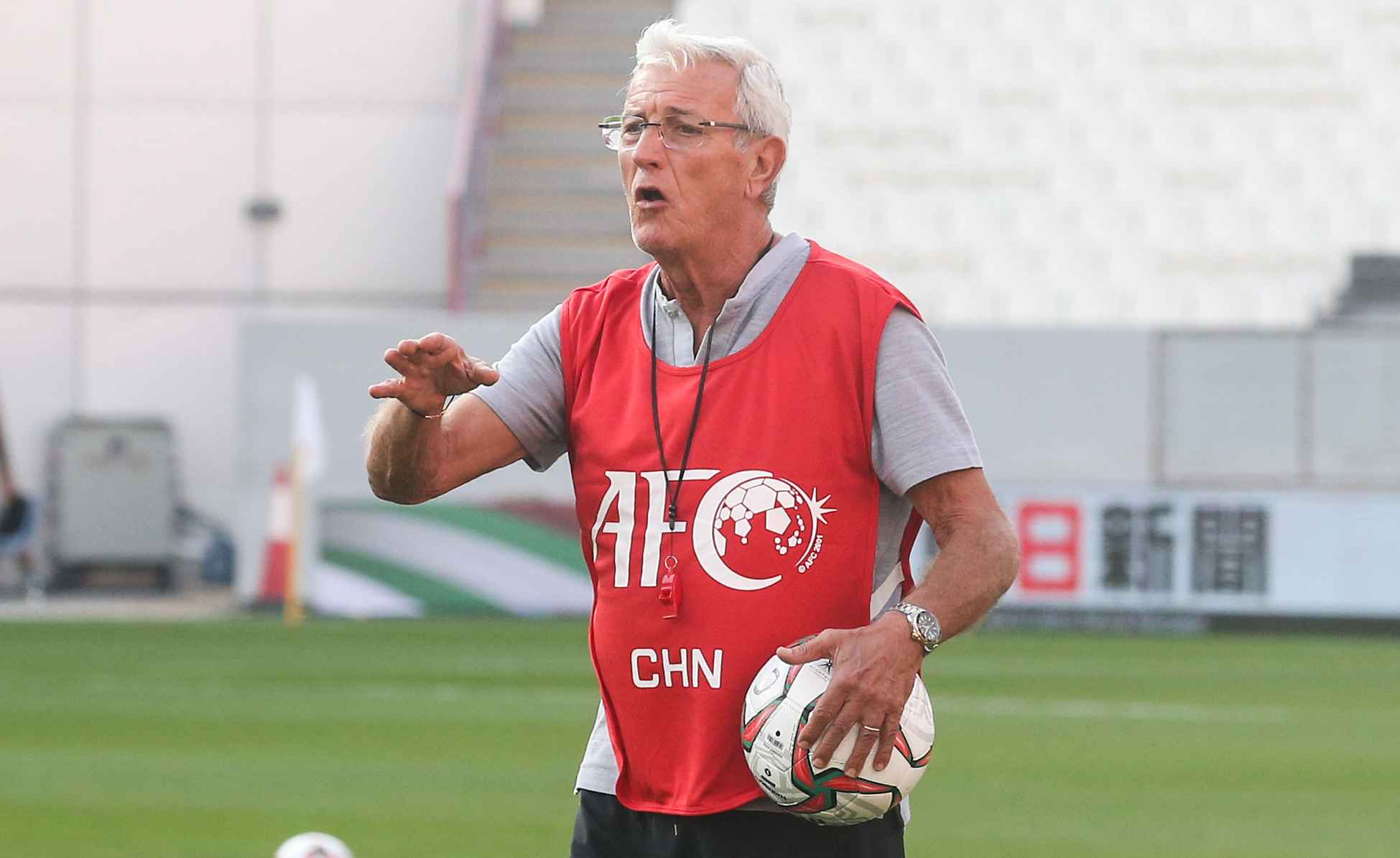 Lippi has called on his players to strike the right balance between defense and attack against the Philippines. /VCG Photo

Lippi has called on his players to strike the right balance between defense and attack against the Philippines. /VCG Photo

"It appears to me that they [Philippines ] are more like a European team," observed Lippi. "They have several naturalized players who were born in Germany, Spain and Denmark with great talents physically."
"It won't be an easy game for us, and it may turn out to be a cruel contest. After losing their opening game, the Philippines will pull out all the stops to try to win this game. It will be a big test."
China mauled the Philippines 8-1 in a one-sided friendly in the summer of 2017, but the Azkals is now a different proposition to the team that has been awful in every department after former England boss Sven-Goran Eriksson took charge last November.
The 70-year-old Swedish veteran has overseen an upturn in form for the Philippines, who displayed a brilliant blend of resilience and tactical discipline during their narrow defeat to almighty South Korea in the opener. 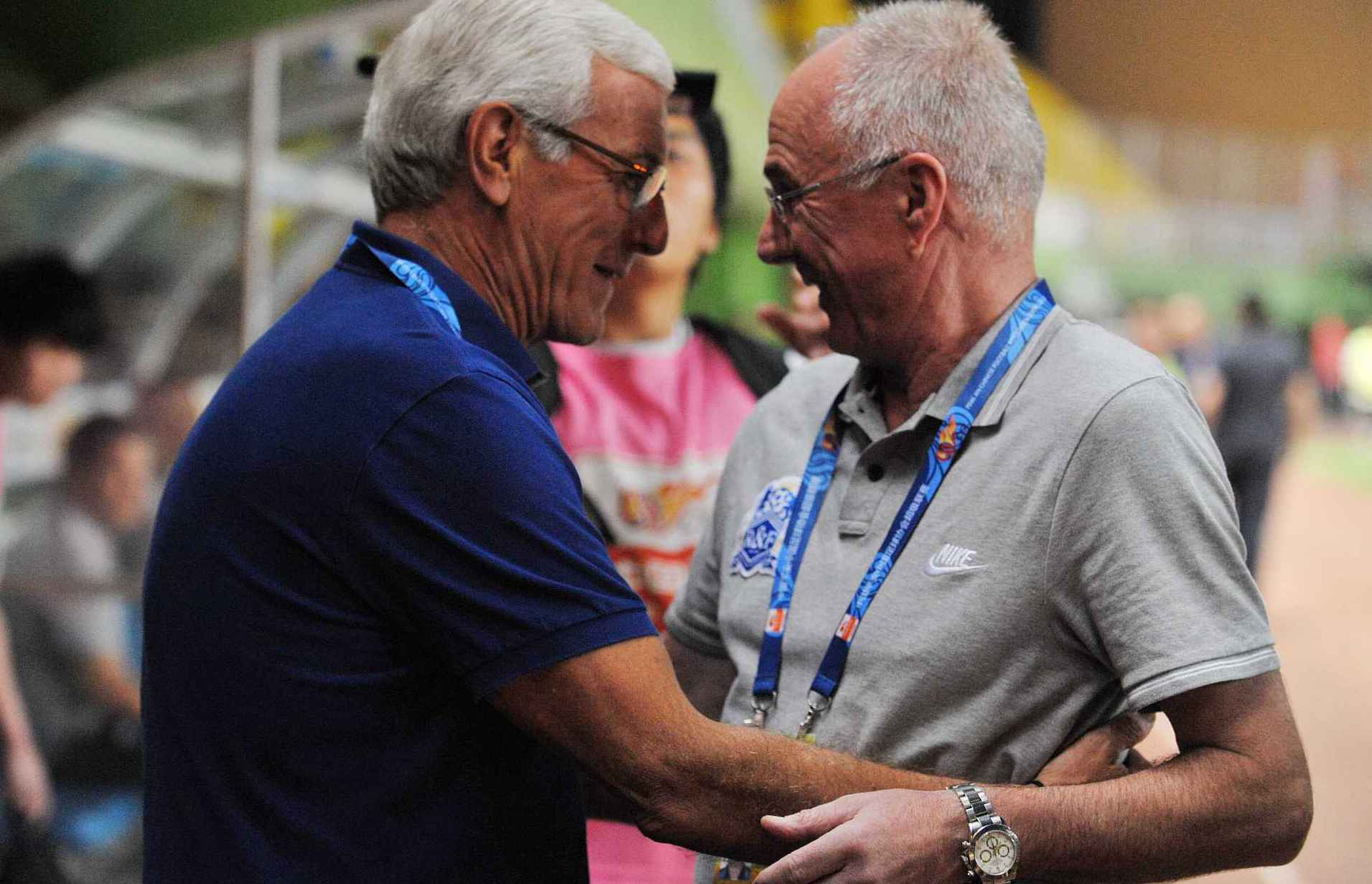 Lippi (L) shared a warm hug with Eriksson ahead of the Chinese Super League showdown between Guangzhou Evergrande and Guangzhou R&F on September 28, 2014. /VCG Photo

Lippi (L) shared a warm hug with Eriksson ahead of the Chinese Super League showdown between Guangzhou Evergrande and Guangzhou R&F on September 28, 2014. /VCG Photo

Lippi is obviously no stranger to Eriksson and embraces the opportunity to renew acquaintances with his old foe.
"We've met many times on the pitch. In Italy, I was at Juventus, and he was with Lazio. And then in China, I coached [Guangzhou] Evergrande while he was the boss of [Guangzhou] R&F."
"We are pretty good friends, but I didn't talk with him recently about the upcoming encounter. I may have a brief conversation with him before the game though."