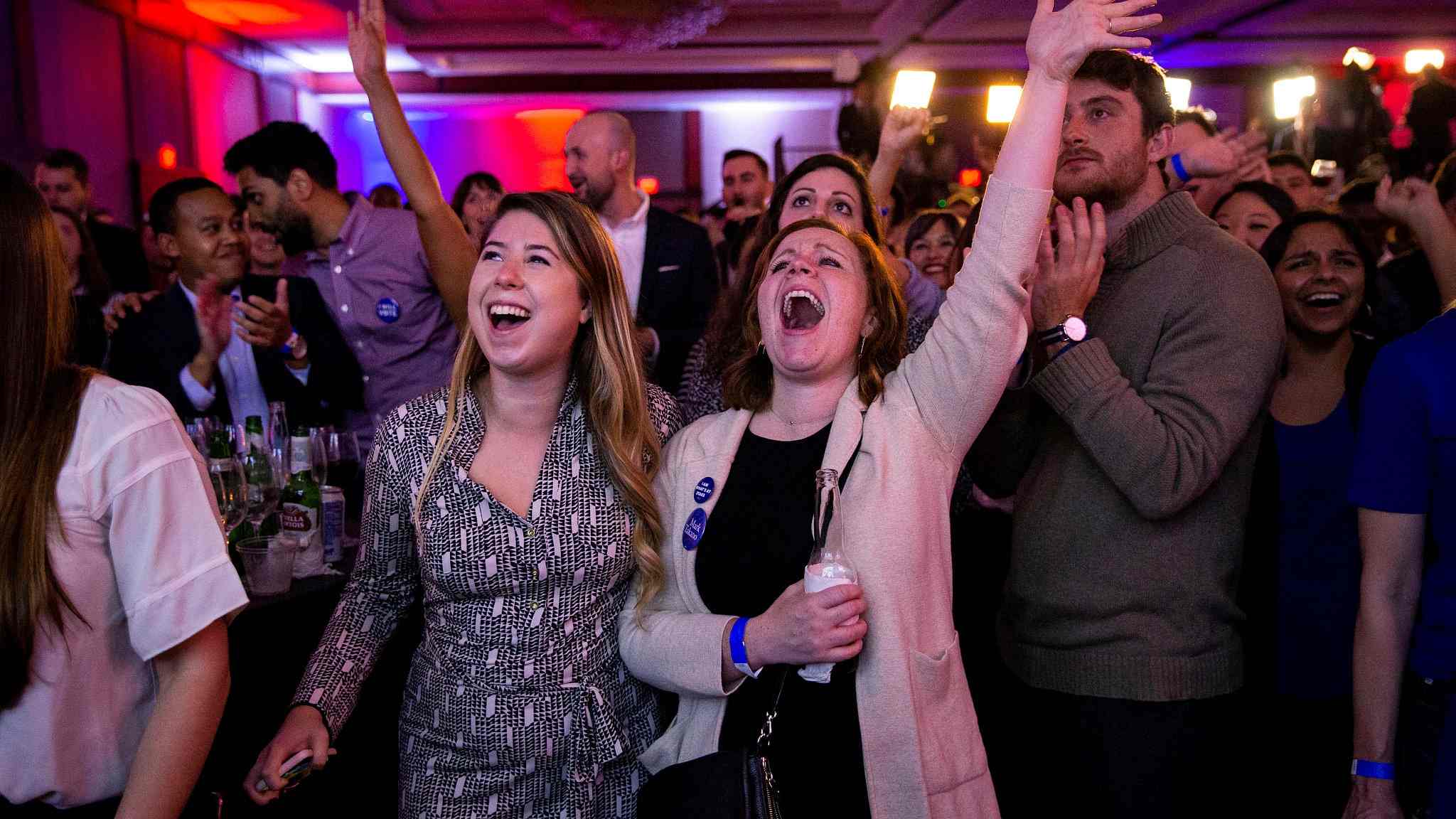 ‍As the dust settles on the 2018 US midterm election, some major trends have emerged: more women than ever before will enter Congress, while young voters turned out in droves at polling stations.
Here are a few key takeaways on the day after the election.

The main headlines on Tuesday night, US time, were of the Democrats taking back the House and of Republicans tightening their hold on the Senate.
But beyond the much talked-about blue and red waves, the country also saw a significant pink wave.
At least 108 women were elected or re-elected to Congress, according to provisional results. Added to 10 female senators who were not up for re-election this year, this will mean 118 women serving in the House or Senate come January, far more than the current 107. 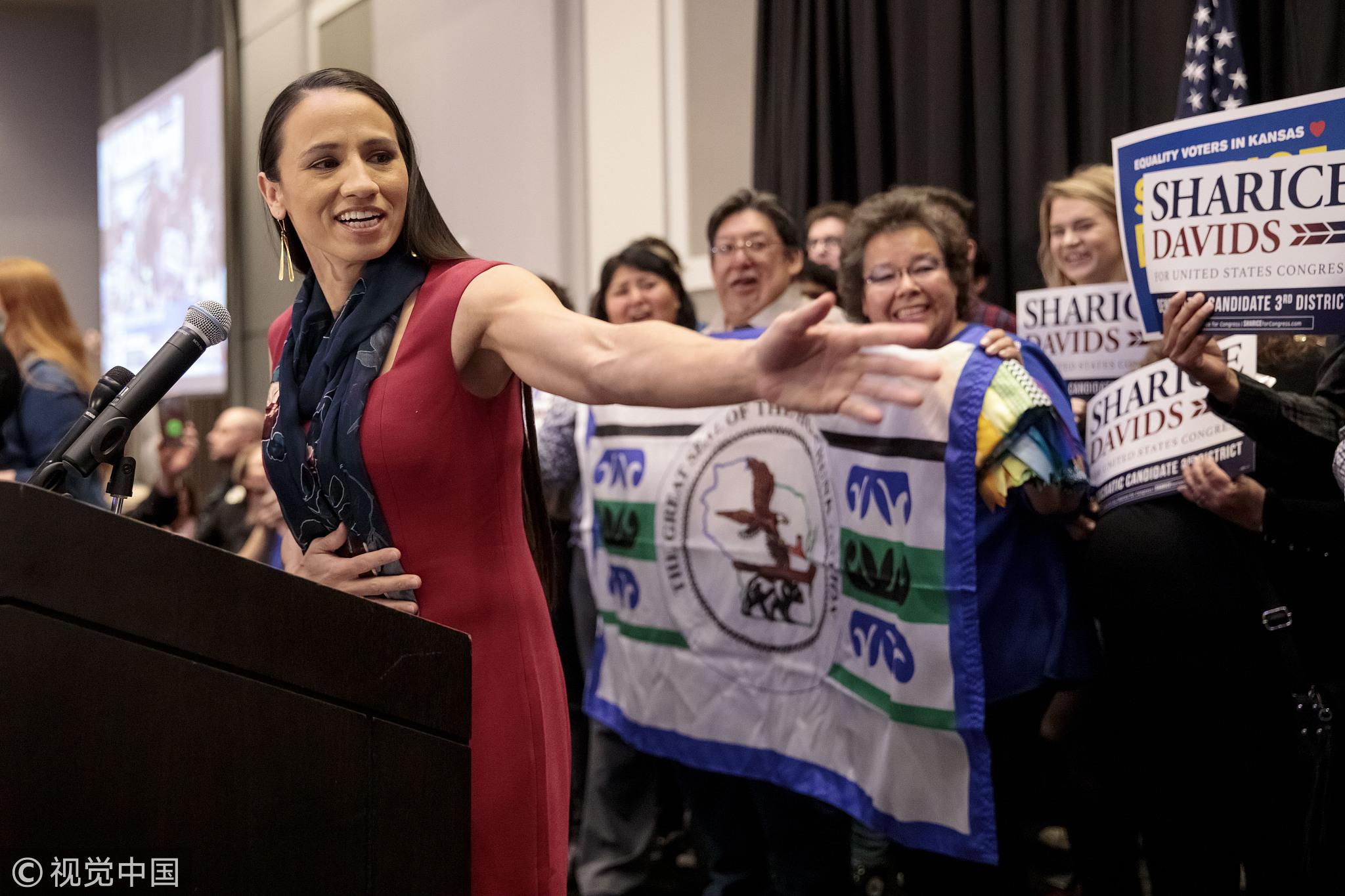 Many credited Donald Trump's election and presidency for the record number of female candidates running in this election – over 500 compared to around 200-300 in the past.
"I think a lot of women woke up the day after the 2016 election and they were disillusioned. But rather than crawling under the covers and giving up on politics they decided that they needed to be part of politics," said Debbie Walsh, director of the Center for American Women and Politics (CAWP) at Rutgers University.
Even with this surge, women will make up just about 22 percent of both the House and Senate. The vast majority of female candidates were also Democrats, indicating a gender gap between the parties.

About 113 million people, or 49 percent of eligible voters, cast their ballot on Tuesday, according to Edison Research data cited by CNN – a record for midterm elections since at least 1918. In the last such midterms in 2014, voter participation was just 36.7 percent. 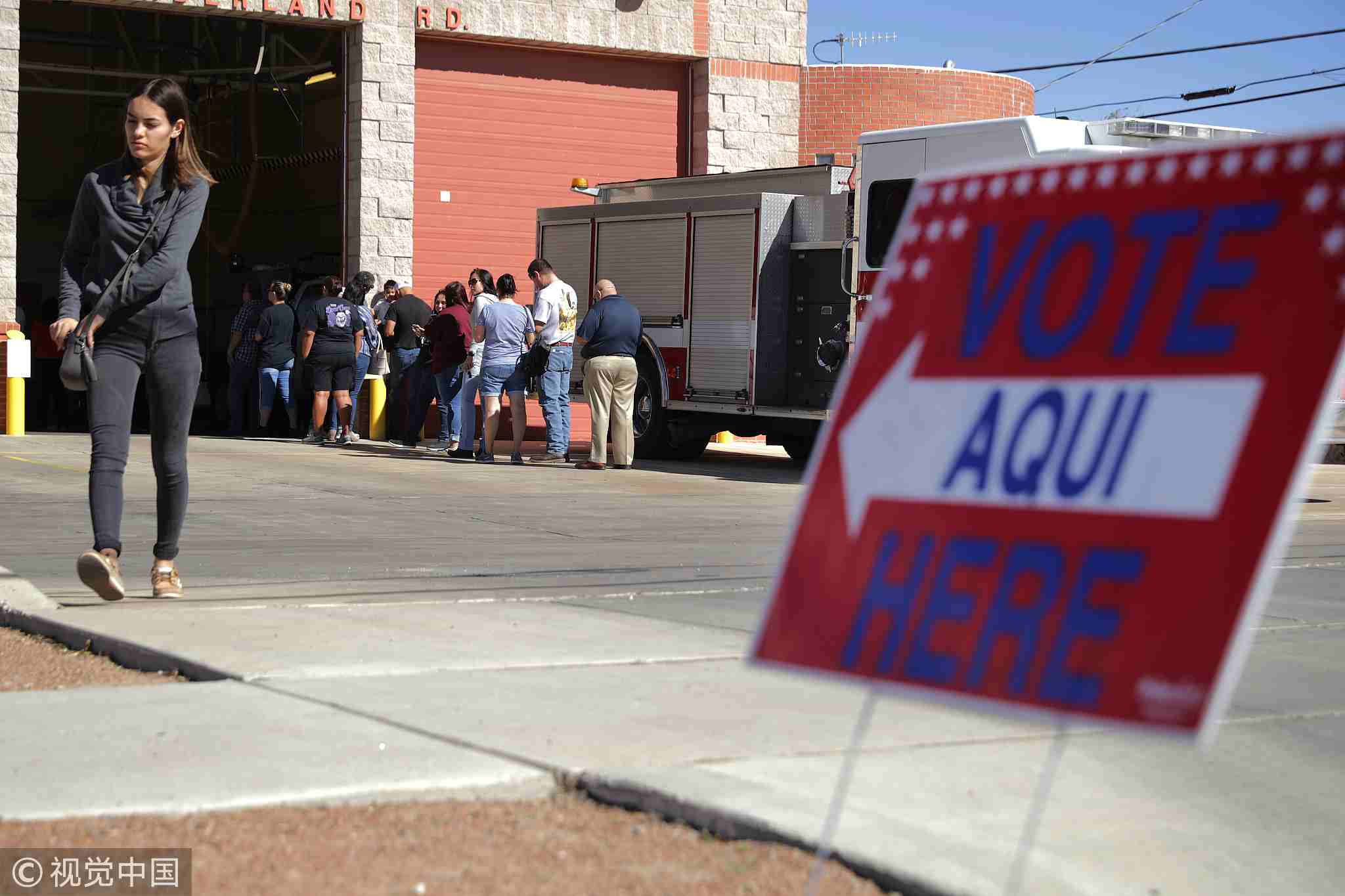 Younger and more diverse candidates, and hot issues such as immigration and gun control helped galvanize voters, including women and young people, whose numbers are expected to have surged in this election.

It's not over yet

While most races had a clear winner by Wednesday, several have yet to be decided. This includes races that were too close to call and others that may be headed for a legal challenge.
On Thursday, Beijing time, three races for the Senate and 14 races for the House still had no clear result.
The two leading candidates in the Mississipi Senate race will face each other in a run-off election on November 27.
Arizona is waiting for postal ballots to be counted to declare a clear winner, which might take days.
In Florida, incumbent Bill Nelson, trailing his Republican opponent Rick Scott by 0.4 percentage points, has called for a recount.
But perhaps the most contentious result was in the Georgia gubernatorial race. Republican Brian Kemp claimed victory after securing 50.3 percent of votes, ahead of Democrat Stacey Abrams with 48.7 percent. 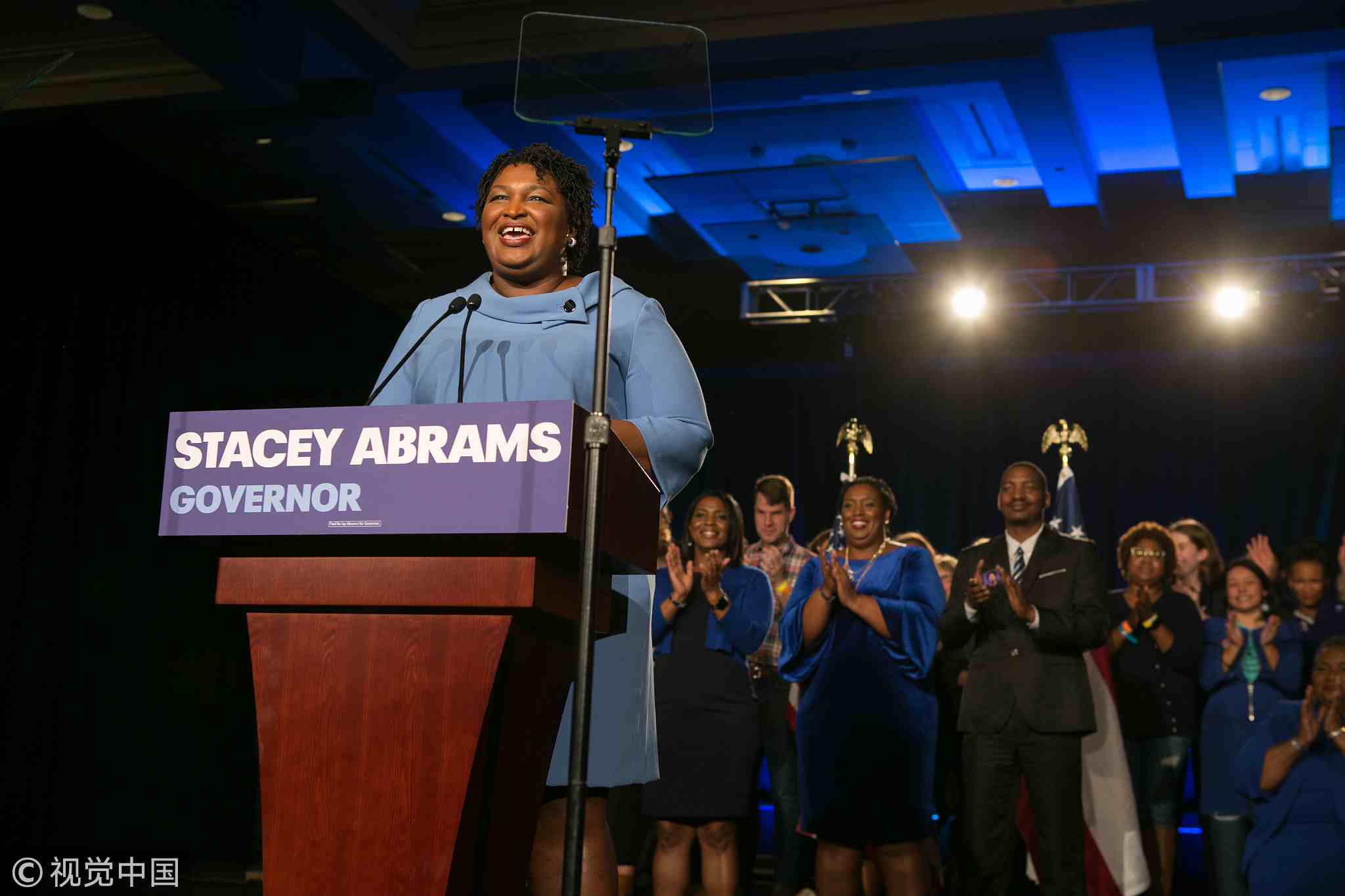 Abrams, however, refused to concede on Wednesday and her campaign said it might launch a legal challenge against the result. Kemp, who oversees elections in Georgia as secretary of state, already faced accusations of voter suppression ahead of the midterms.
If declared the winner, Abrams would become the first female African-American governor in the US.

Issues on the ballot

While the focus on Tuesday was mainly on the people being elected as senators, representatives and governors, voters were also asked to rule on a range of critical issues.
In Florida, voters passed Amendment 4, giving some 1.5 million convicted felons the right to vote again once they have served their sentence – a huge voting rights issue.
Alabama and West Virginia approved constitutional amendments restricting access to abortion. 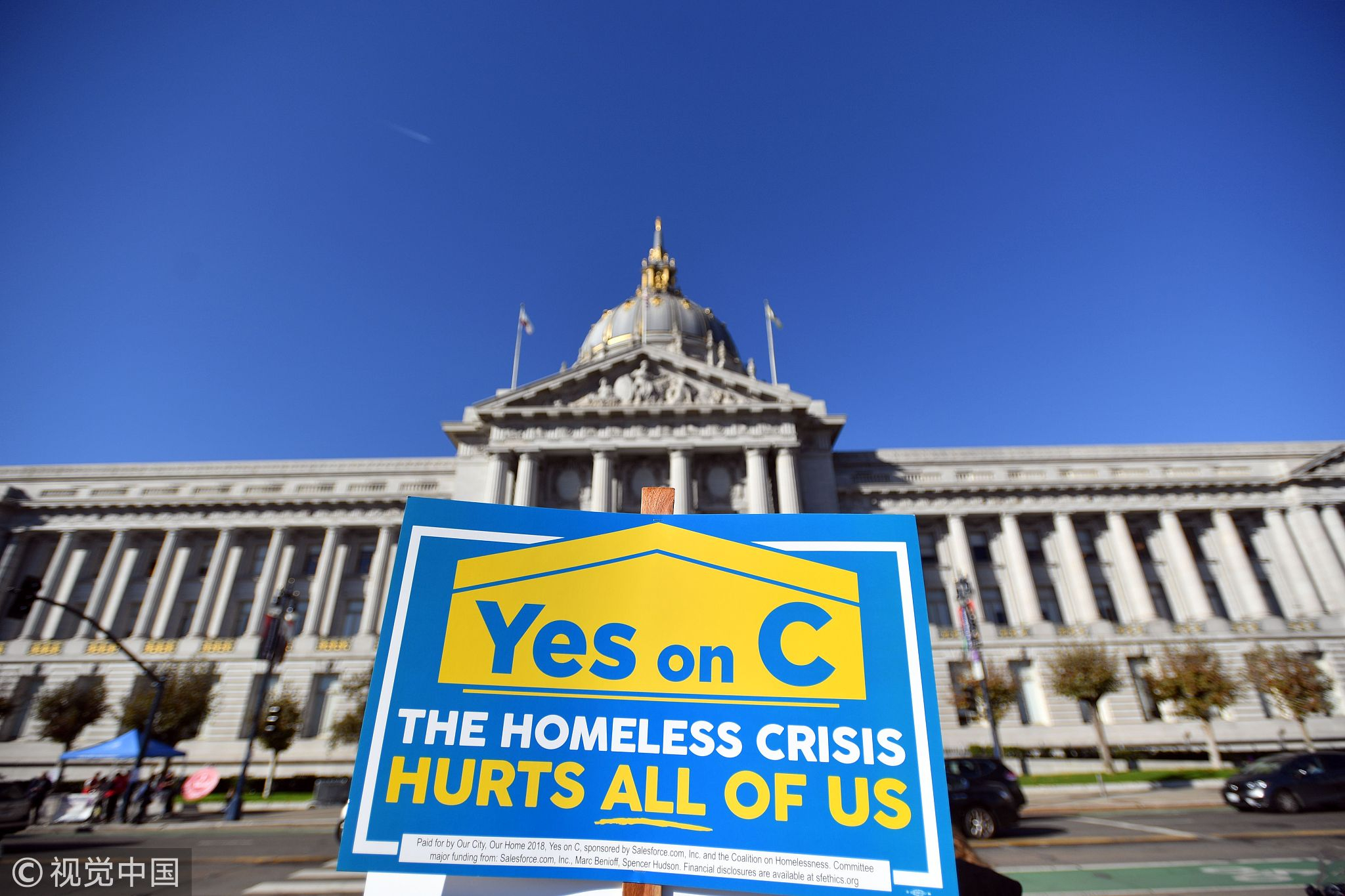 A sign in favor of San Francisco's proposed homeless tax is viewed in front of City Hall in San Francisco, California, on November 6, 2018. /VCG Photo

A sign in favor of San Francisco's proposed homeless tax is viewed in front of City Hall in San Francisco, California, on November 6, 2018. /VCG Photo

Washington state passed tough new gun control laws, raising the legal age for buying a gun from 18 to 21, increasing background checks and imposing a waiting period for purchases.
Missouri voted in favor of legalizing medical marijuana, while Michigan approved its recreational use.
In one of the more unusual moves, San Francisco approved a tax on major firms to fund shelters and provide care for the homeless, despite objections from several big tech companies.

In a quirk of the US political system, a dead man was elected in Nevada. Dennis Hof, a brothel owner and one-time reality TV star, won 69 percent of votes in a state assembly race even though he died a month before the election.
His posthumous victory means his seat remains in Republican hands. Local officials will appoint a replacement.
(Top picture: Supporters cheer as they watch election results come in at a Democratic election night rally in Washington, DC, November 6, 2018. /VCG Photo)