The Trump-Kim drama – a deal tomorrow, but not today
Bobby Naderi 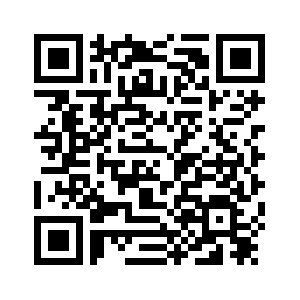 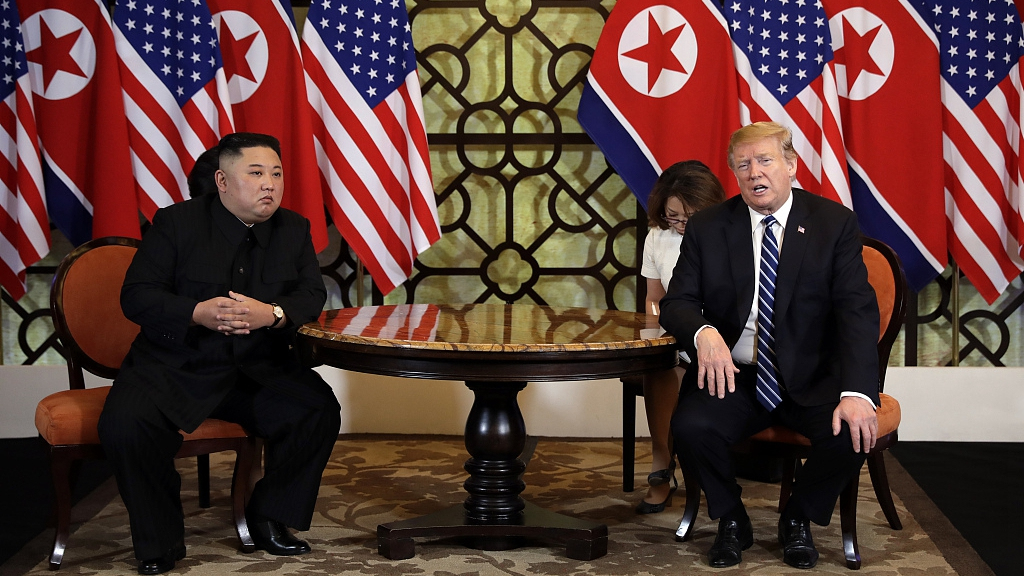 Editor's note: Bobby Naderi is a journalist, current affairs commentator, documentary filmmaker and member of the Writers Guild of Great Britain. The article reflects the author's opinion, and not necessarily the views of CGTN.
The prospects for a deal between the U.S. and the Democratic People's Republic of Korea (DPRK) remain dim because the arrogant attitude of President Donald Trump and key business/economic decision-makers at the White House is this: In this drama, what's mine is mine; what's yours is negotiable.
For this, you only need to take a look at the developing facts-on-the-ground between the U.S. and the DPRK. Here, Trump's position always boils down to a deal tomorrow, but not today. And DPRK leader Kim Jong Un, promised some vague U.S. guarantees, says he will wait "until the end of this year" for Washington to make "courageous" decisions in talks.
And that's only part of the equation. The hope for a third summit has been raised yet again by President of the Republic of Korea (ROK) Moon Jae-in. It's now easy to lose focus amid all those flying to the White House, holding hours of talks, telephone conversations and video conferences, and meeting most of the neocon leaders one-to-one, where one thing remains persistent: The third summit would be yet another diplomatic collapse because “The Great Decider” has no clothes. 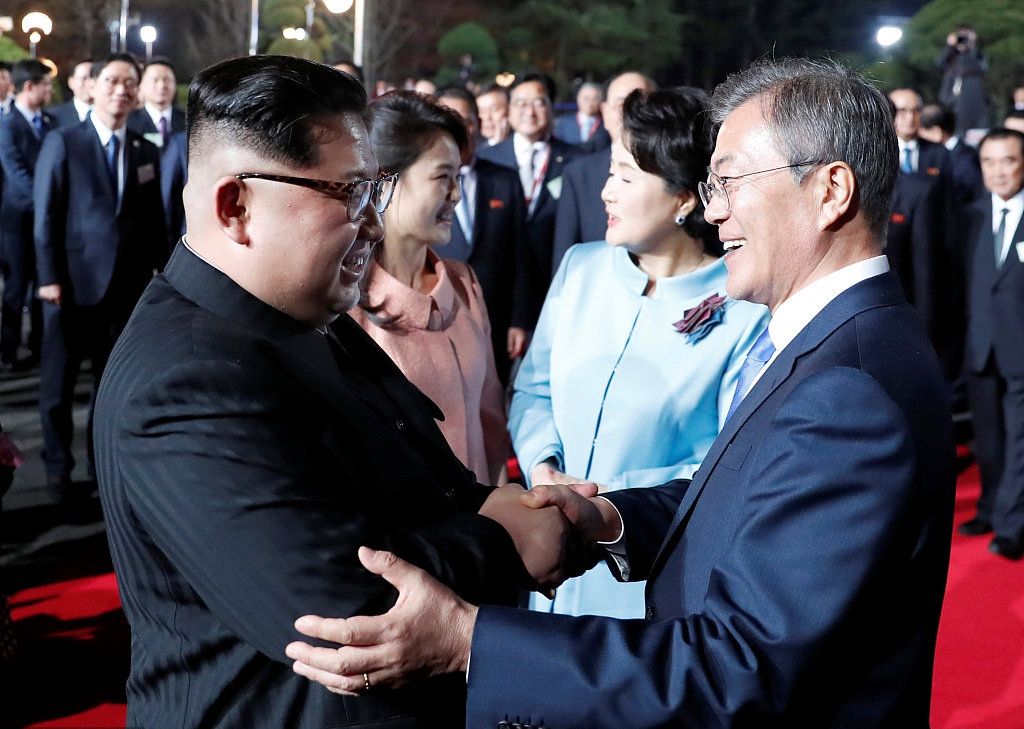 The U.S. foreign policy always consists of taking everything and offering nothing in return, while at the same time ignoring the security concerns of the Korean Peninsula and the suffering of the DPRK people. On top, the goal of a denuclearization solution under the Panmunjom Declaration requires more than a halt to nuclear and missile tests. It requires that Washington gradually removes the existing sanctions, and this is what Trump is not doing.
Trump keeps talking about a nuclear-free zone deal that the “War Party” is in the meantime nuclearizing. The acrimony is an excuse for increased military deployments and war games, and a chance to push Seoul into increasing its military spending, including buying costly U.S.-made arms.
What this does reveal is that Washington is baying for a way out, while falsely depicting a dangerous DPRK nuclear threat through disputed experiments, questionable documents, unreliable sources, and a sea of political rhetoric. By refusing to lift the economic sanctions, Washington also conspires to mislead the world in this new ruse. The risk is they might have to go to war to confront a manufactured threat they know does not exist.
For all the obvious historical reasons, it's about time to accept that the U.S. has no serious run at reality and that the Trump-Kim summits were all set up to fail. No matter how many violations of international agreements and treaties it commits, the U.S. will always stand firm behind its escalating foreign policy of provocation. It will never bring about peace in the region or maintain the current momentum for regional dialogue.
In realpolitik terms, there isn't much the U.S. can do. To approach this issue another way, if the third summit escalates to something that may cause more instability, the “War Party” will only have itself to blame. Trump should take responsibility for the consequences. 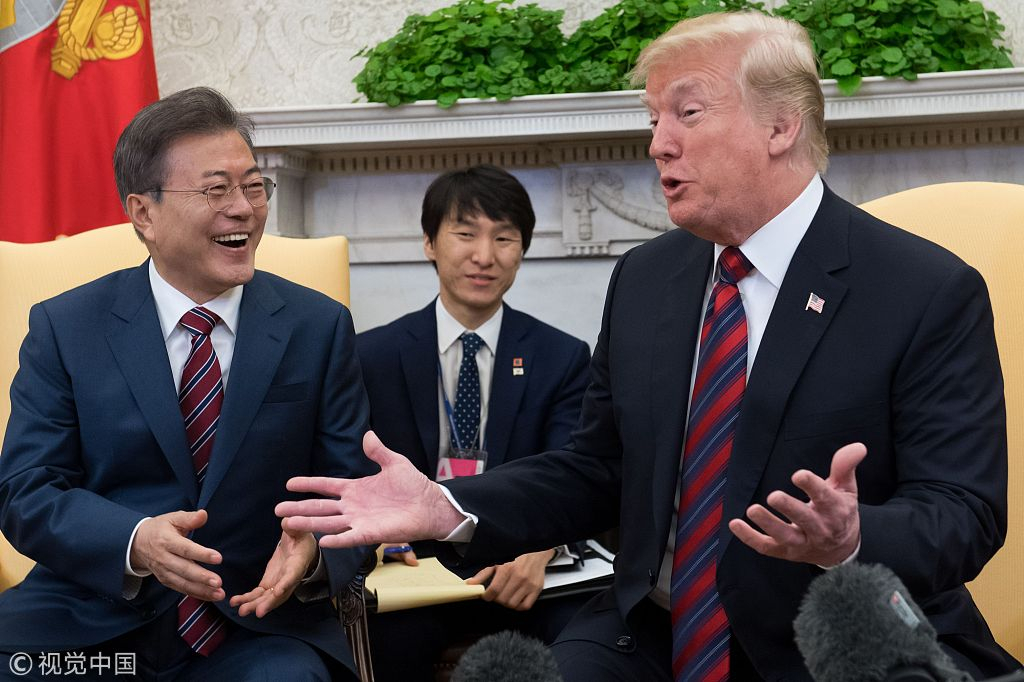 U.S. President Donald Trump and ROK President Moon Jae-in hold a meeting in the Oval Office of the White House in Washington, DC., May 22, 2018. /VCG Photo

U.S. President Donald Trump and ROK President Moon Jae-in hold a meeting in the Oval Office of the White House in Washington, DC., May 22, 2018. /VCG Photo

What's finally coming into view is that Trump and his neocon followers are not moving toward diplomacy and Kim's attempt to work out a deal on his country's opening up to the outside world is in jeopardy. The U.S. is bringing up more excuses and demands to avoid lifting its sanctions as agreed under the Panmunjom Declaration.
All this and more are shortsighted, counterproductive and part of a larger sabotage campaign. The political class in Washington, without so much as a hint of embarrassment, is openly trying to force Pyongyang to surrender.
This is unfortunate. It's not a sign that Pyongyang is losing faith in the negotiation process. It's a sign that Washington is not serious about working for a diplomatic outcome. The silly part is that his neocon followers say the burden still remains on Pyongyang – with military options always on the table.
Realistically, all the myriad complex components are not there for a conclusive deal. The parties are still far apart on some key regional issues, and both sides have incentives to come to an agreement that solves the dispute.
In this “great American disconnect,” the provocative moves by Trump and his neocon followers risks derailing the promising negotiations. They feed already understandable DPRK suspicions that Washington is not "genuinely interested" in improving its relations with Pyongyang. If any, the goal of being at the next summit is to strike a deal. A case can be made that that's not where the extremely reluctant U.S. deep state wants to be.
(Cover photo: U.S. President Donald Trump (R) and DPRK leader Kim Jong Un hold their second one-on-one meeting at the Sofitel Legend Metropole hotel in Hanoi, Vietnam, February 28, 2019. /VCG Photo)
(If you want to contribute and have specific expertise, please contact us at opinions@cgtn.com)