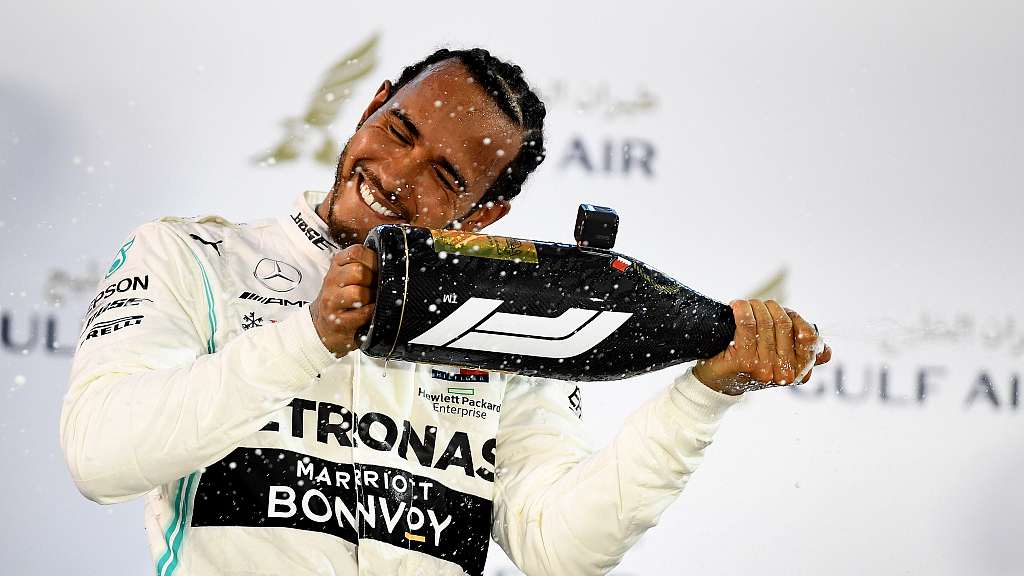 Defending world champion Lewis Hamilton took advantage of Ferrari new boy Charles Leclerc's wretched misfortune on Sunday when he claimed a dramatic victory for Mercedes in the Bahrain Grand Prix.
The five-time champion, who looked to be heading for second behind the 21-year-old Monegasque, gained the lead with 10 laps remaining when Formula One's new star, who claimed a record-breaking pole position for Ferrari on Saturday, was hit by engine problems.
As he slowed, Hamilton hunted him down to claim his first win of the season, his third at the Bahrain International Circuit and the 74th of his career ahead of Mercedes team-mate Valtteri Bottas, who won the season-opening Australian Grand Prix.
Leclerc came home third as the race finished behind a Safety Car, following the spectacular late exit of both Renaults at Turn Two, ahead of Max Verstappen of Red Bull.
"It happens," said a calm Leclerc afterward. "It's part of motor sport. It's a very hard one to take, but I am sure we will come back stronger."
Four-time champion Sebastian Vettel finished fifth in the second Ferrari after a late spin had damaged his front wing during a duel with Hamilton, ahead of British rookie Lando Norris who scored his first points for McLaren in sixth.
Kimi Raikkonen, 39, was seventh for Alfa Romeo ahead of Pierre Gasly of Red Bull, Thailand rookie Alex Albon of Toro Rosso, who also had his first points finish, and Mexican Sergio Perez of Racing Line.
"That was extremely unfortunate for Charles, he drove a great race," said Hamilton, on the team radio. 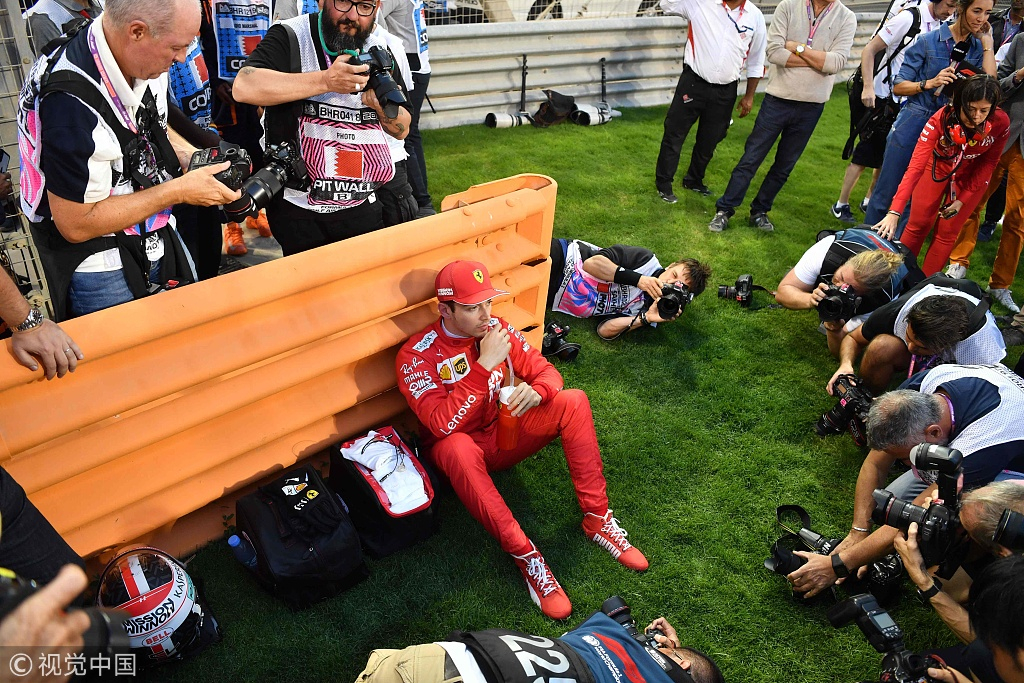 It's a tough day for Ferrari's Charles Leclerc (C) who thoroughly deserves the win at the Bahrain Grand Prix, Bahrain, March 31, 2019. /VCG Photo

It's a tough day for Ferrari's Charles Leclerc (C) who thoroughly deserves the win at the Bahrain Grand Prix, Bahrain, March 31, 2019. /VCG Photo

"We've got work to do to keep these guys off our tails. It must be devastating for Charles."
It was Leclerc's first podium finish in F1 and he also scored a point for fastest lap.
His finish made him the first Monegasque driver to take a podium since Louis Chiron in the 1950 Monaco Grand Prix.
"You drove brilliantly, really great, this weekend – you have a long future ahead," Hamilton told Leclerc.
"As a team, we got lucky today," said Bottas.

'Something strange with engine'

As the lights went out, it was Vettel who gained most traction to launch his car into the lead as they raced to Turn One, Bottas following the German to secure second.
Vettel was soon clear by 1.7 seconds, but Leclerc recovered, clocked two fastest laps and closed the gap.
On lap six, Leclerc swept past Vettel into Turn One to regain the initiative, resisting a counter-attack in a thrilling duel that proved new team boss Mattia Binotto was as good as his word –- the Ferraris raced wheel to wheel.
Behind the leaders, Hulkenberg stormed from 17th on the grid to seventh by lap 12 when the pit stops began with Verstappen switching to mediums, followed by Bottas.
A lap later Leclerc and Hamilton also came in, the Englishman's move acting as an "under-cut" to Vettel, who stayed out on older tires. It was costly for the German as Hamilton breezed by before he re-joined following after lap 14.
Finally, as Romain Grosjean retired his Haas, the order settled with Leclerc in control ahead of Hamilton, struggling with his rear tires, Vettel and Bottas. 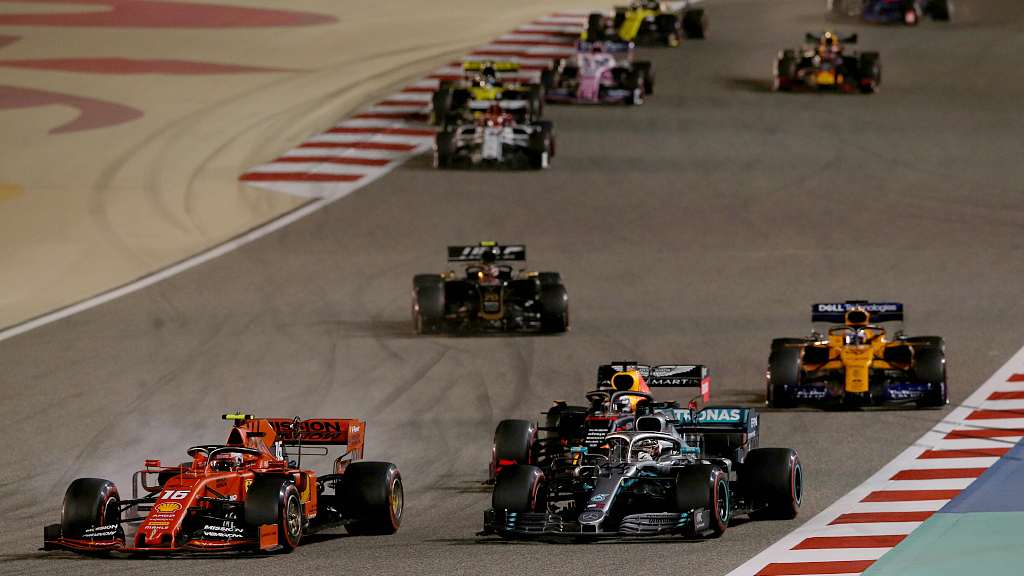 Charles Leclerc (L) has led for most of the race during the F1 Grand Prix of Bahrain at Bahrain International Circuit, March 31, 2019. /VCG Photo

Charles Leclerc (L) has led for most of the race during the F1 Grand Prix of Bahrain at Bahrain International Circuit, March 31, 2019. /VCG Photo

Hamilton, on softs, struggled to stay in touch with the Ferraris, both on medium compound tyres. By lap 27, Leclerc led Vettel by 8.3 seconds and Hamilton was a further three seconds adrift, knowing he had to hang on.
He pitted again after 35 laps, re-joining fourth on medium. Vettel pitted a lap later and, on resumption, was soon locked in battle with Hamilton.
The Briton's first attempt to pass was resisted, but an on lap 38 he swept round the outside of Turn Four to pass. Vettel, his front wing damaged, spun, recovered and limped back to the pits.
By then, Leclerc had pitted again and led Hamilton by 10 seconds with Bottas third and Verstappen fourth, ahead of Hulkenberg. Vettel soon re-joined and passed his compatriot's Renault for fifth.
With 11 laps remaining, it appeared that Leclerc was heading to his maiden victory before his car lost power.
"There's something strange with the engine," he reported, after losing 1.7 seconds. "What's happening?"
"We have no H recovery," Ferrari responded, meaning the turbo had failed. Hamilton, unflustered and merciless, simply hunted him down.
Source(s): AFP