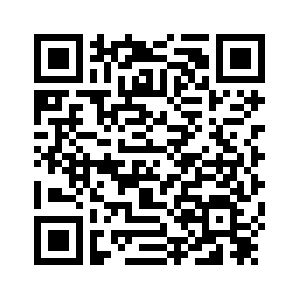 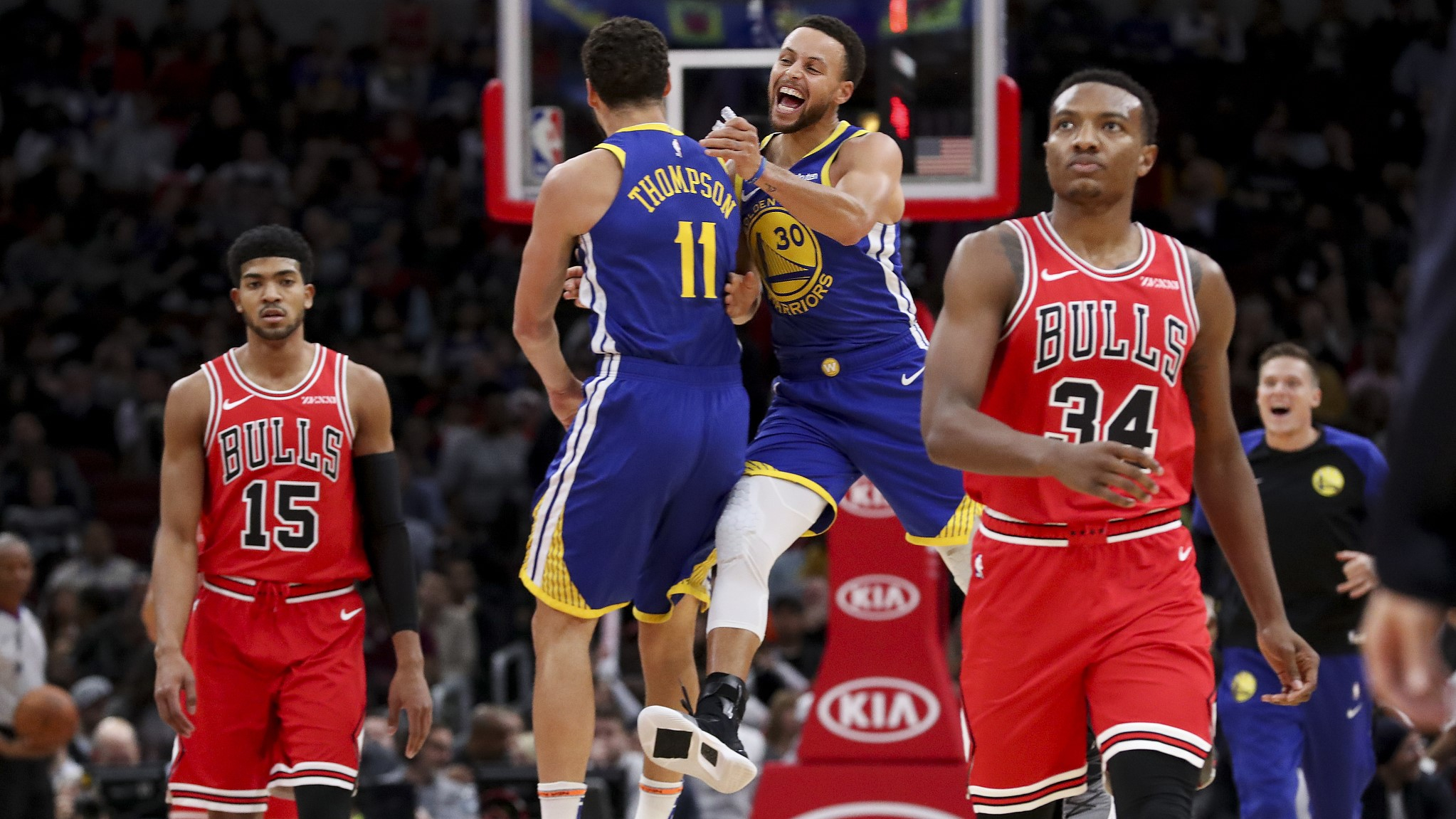 The 2018-19 NBA regular season witnessed a new record on Monday as Klay Thompson of the Golden State Warriors made 14 three-pointers to help his team thrash the Chicago Bulls 149-124 at the United Center. 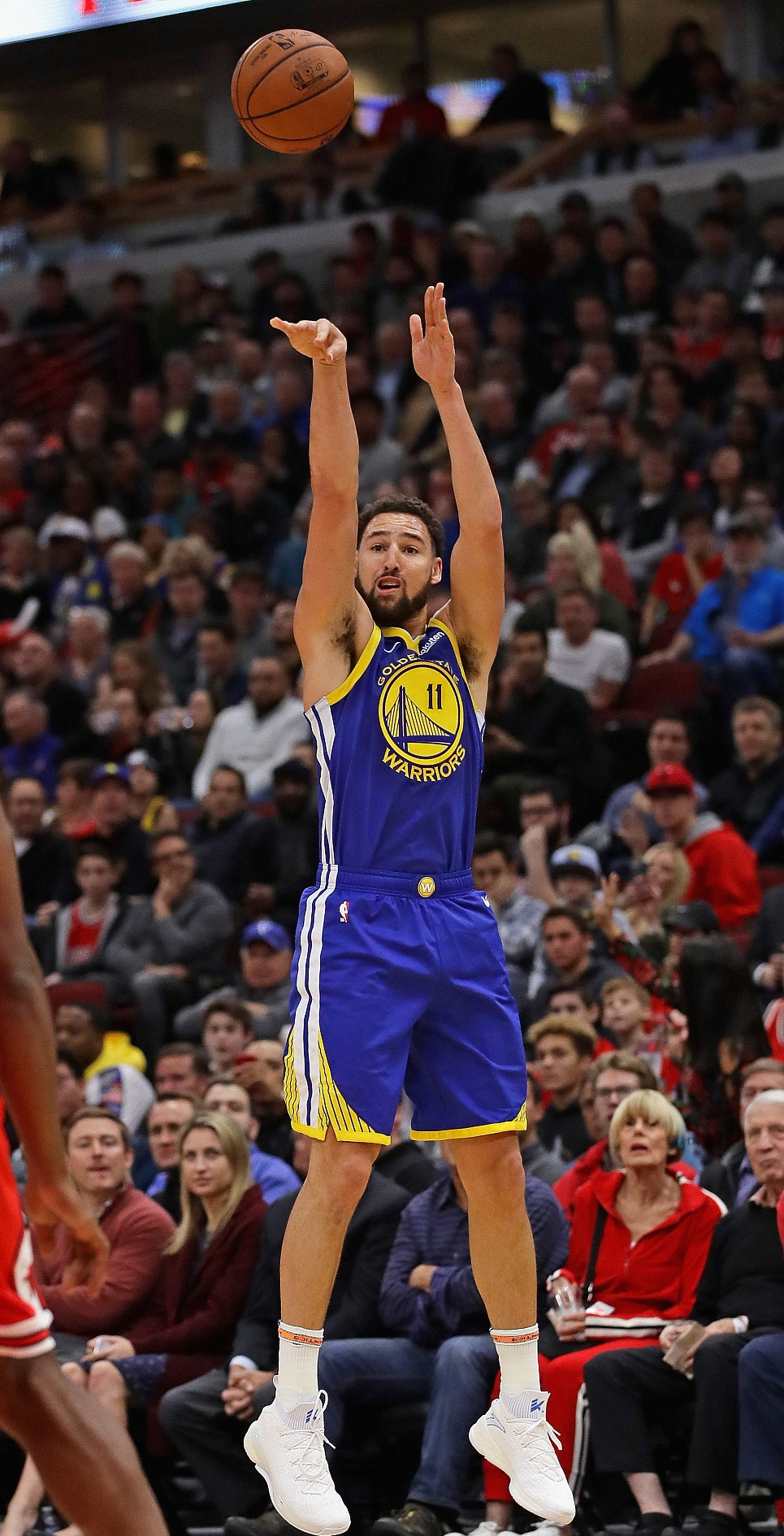 Thompson has struggled with his shooting since the start of the season, but suddenly everything clicked for him at the beginning of the game on Monday. Thompson made eight shots out of nine attempts, including six three-pointers to score 22 points, in the first quarter alone.
Golden State continued their streaky offensive performance in the second quarter by putting down another 48 points, making the score 92-50 after the first half.
Thompson drained four three-pointers this quarter. Making a total 10 three-pointers not only broke the record of nine in the first half (by Deron Williams in 2013), but also matched the record of 10 (by Chandler Parsons in 2014). The Warriors as a team made 17 three-pointers in the first half, a new league record. Their 92 points is also the second-highest in a half, only next to the Phoenix Suns' 107 points in 1990. 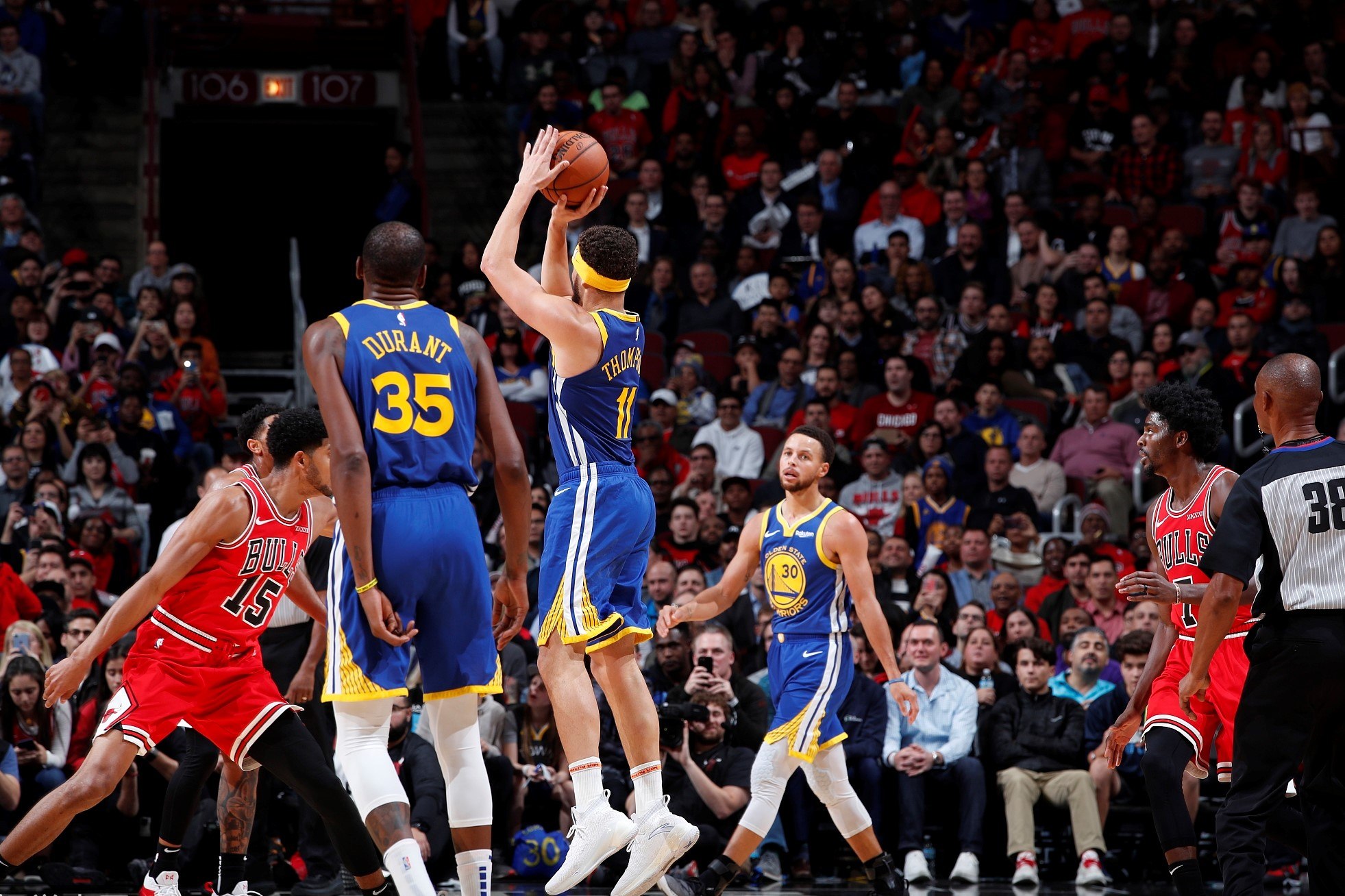 The Warriors scored 92 points the first half score, the second-highest in NBA history. /VCG Photo

The Warriors scored 92 points the first half score, the second-highest in NBA history. /VCG Photo

The game was a foregone conclusion in the second half. The only question then was if Thompson would break the three-point record in one game, held by his teammate Stephen Curry hit 13 from beyond the arc in 2016.
The team rallied around Thompson's quest with the rest of the team consistently passing him the ball. Finally, after missing several shots, Thompson put in his 14th three-pointer when there were four minutes and 53 seconds left in the third quarter, scoring 52 points, giving him the record for most three-pointers in both the regular season (14) and the playoffs (11).
"I just knew I was due for a big night, I just knew it. It's the best feeling. Something I haven't felt in the first six, seven games. To snap out of a slump with the record, I couldn't ask for a better way to do it. And I'm just going to continue this momentum on Wednesday, and it's one of the best feelings in basketball when you touch the ball and feel like it's going in every time," said Thompson after game. 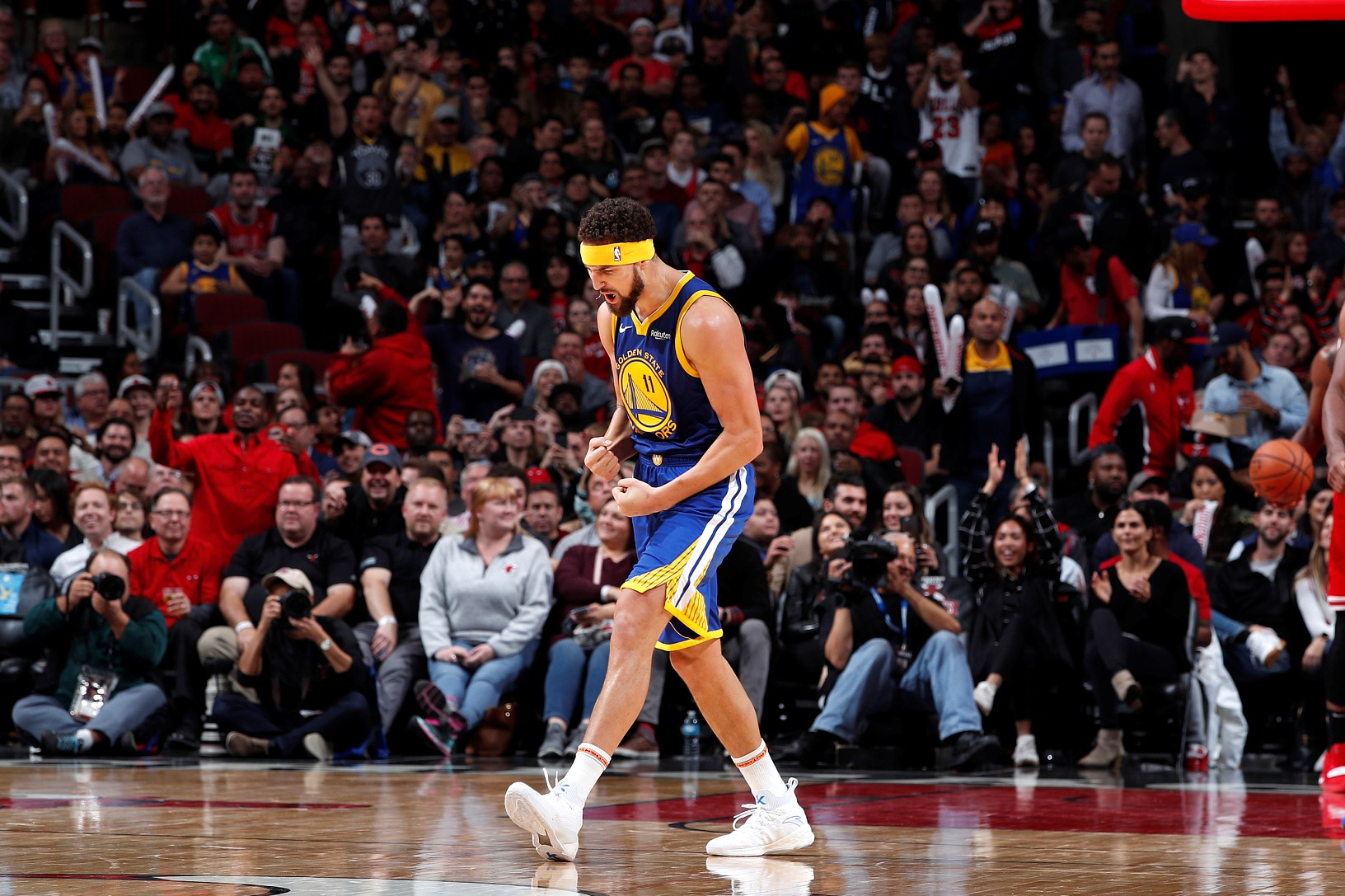 Thompson now holds the record for most three-pointers in both regular season (14) and the playoffs (11). /VCG Photo

Thompson now holds the record for most three-pointers in both regular season (14) and the playoffs (11). /VCG Photo

After seeing his own record broken, Curry seemed unbothered. "It was like a pitcher throwing a no-hitter. Like, you don't really mention anything to him. It's kind of just everybody else figuring out ways we're going to keep feeding him the ball and running our offense to obviously cater to him to knock down shots. Records are obviously meant to be broken. I'm just happy it's my teammate and nobody else. And I got to witness it in person," said Curry.

Bucks beat Raptors to become the league's only undefeated team 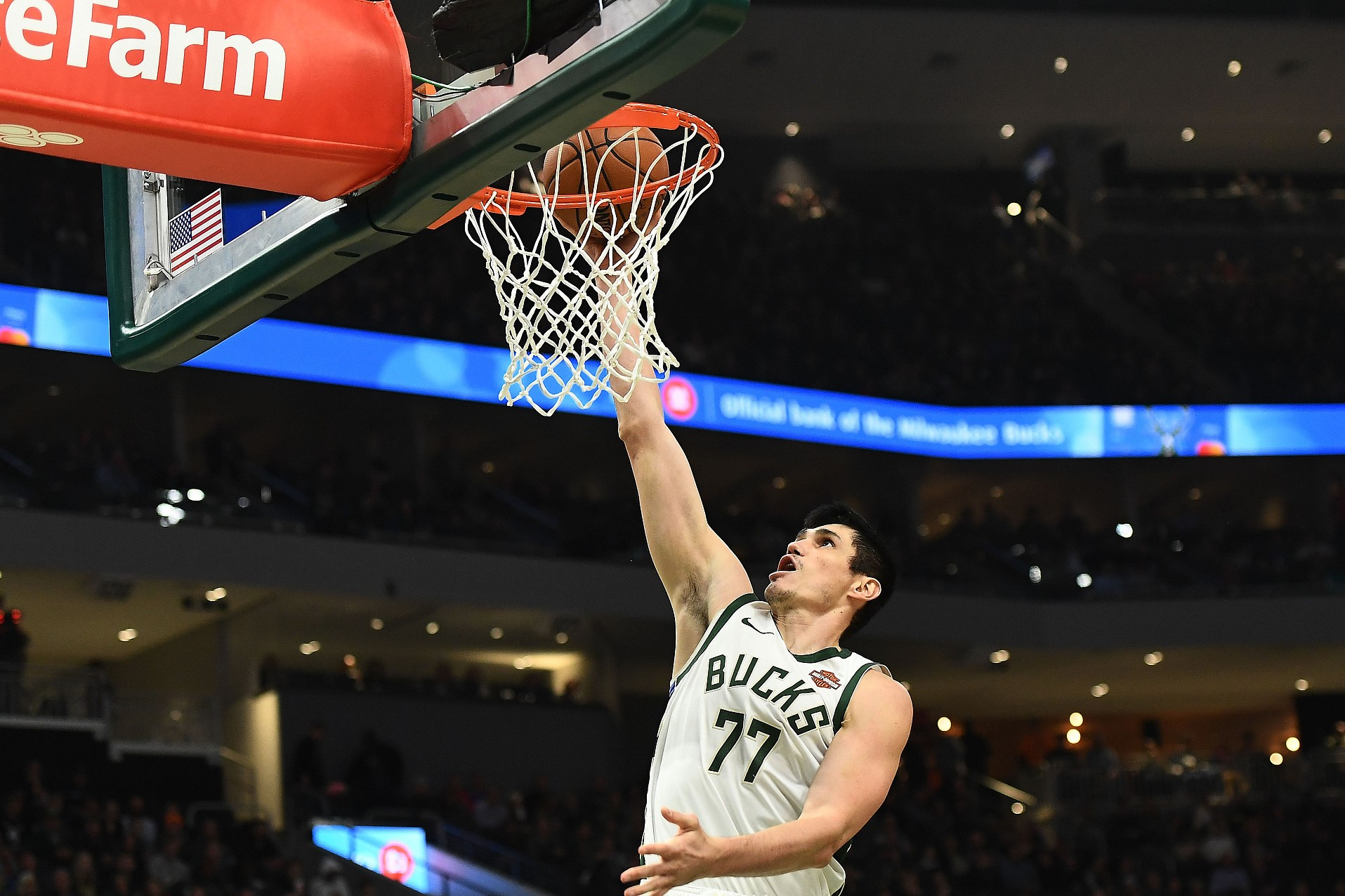 Ersan Ilyasova helps the Bucks defeat the Raptors 124-108 with his 19 points and 10 rebounds. /VCG Photo

Ersan Ilyasova helps the Bucks defeat the Raptors 124-108 with his 19 points and 10 rebounds. /VCG Photo

Two of the league's undefeated teams faced off Monday, dooming the other to their first loss. However, with the Bucks' Giannis Antetokounmpo and the Raptors' Kawhi Leonard ruled out, some of the excitement was lost before the Bucks beat the Raptors 124-108.
Though many worried about Milwaukee's offense without the Greek Freak, the team's bench players stepped up, scoring 48 points. Tony Snell, Thon Maker and Donte DiVincenzo all scored double digits. Ersan Ilyasova who replaced Antetokounmpo's position as starter scored a team-high 19 points and 10 rebounds. The Raptors' Serge Ibaka ended the game with 30 points and nine rebounds. His teammate Kyle Lowry delivered 15 assists but missed all three-pointer shots. 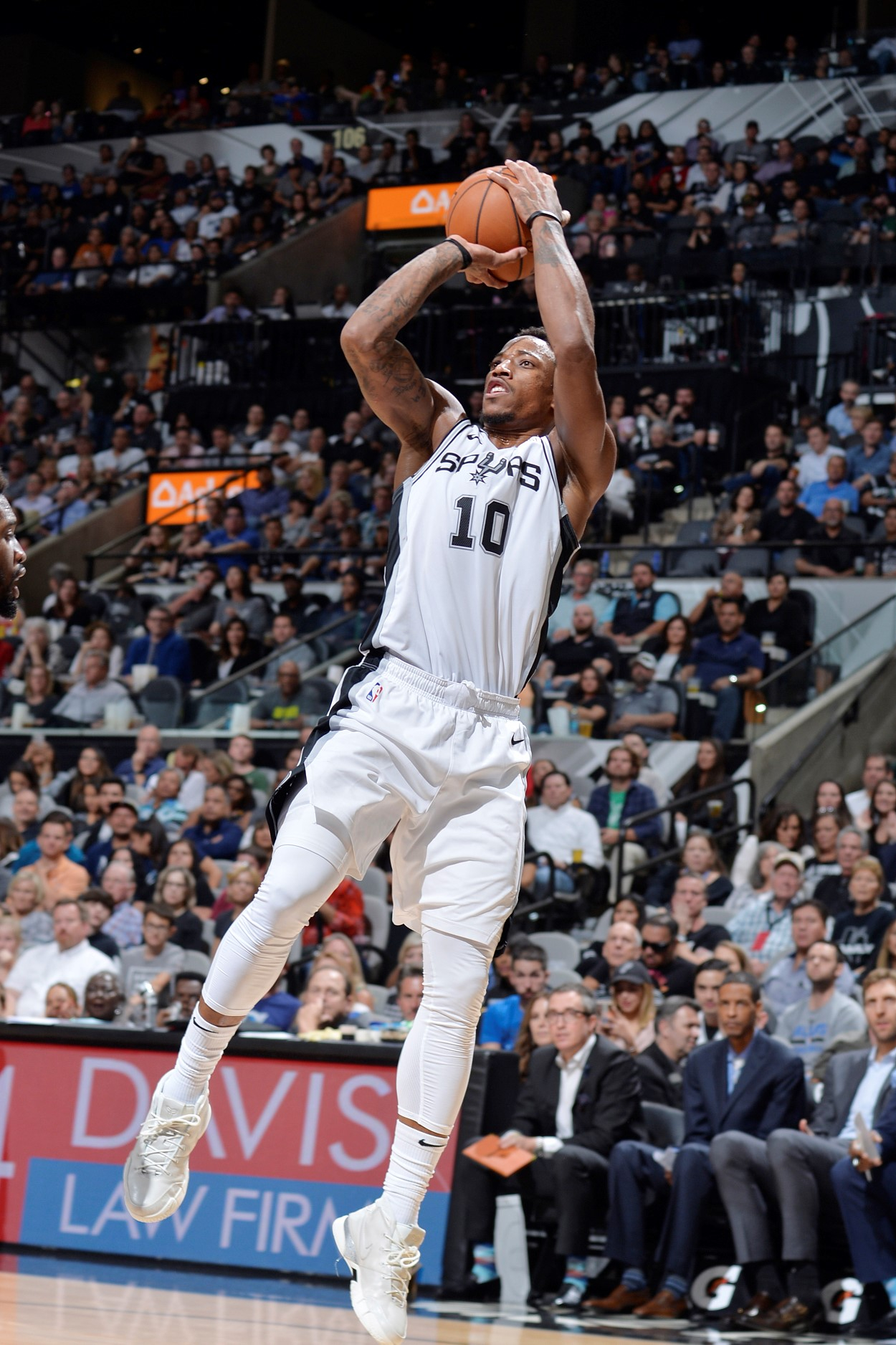 DeMar DeRozan puts down 34 points, six rebounds and nine assists to help the Spurs win a close game against the Mavericks 113-108. /VCG Photo

DeMar DeRozan puts down 34 points, six rebounds and nine assists to help the Spurs win a close game against the Mavericks 113-108. /VCG Photo